So this Monday we ran the last trial game using Neil Thomas’ Pike & Shot rules. For this run out I retrieved some of my oldest and best loved figures and we went back to the Early Renaissance.


I started on my Flodden Field Henry VIII army whilst at university, and bought the applicable Osprey when it first came out. At that time Dixon had a chunky range of 25mm figures based mostly on the illustrations in the Almark “Great Battles” book on Flodden. My mate Derek bought the Scots and I bought the English. We’re holding on for a 500 year anniversary game next year.


So I could have some opponents for them and not duplicate the Scots I bought a contemporary French Army and expanded Henry’s forces from Flodden to the 1513 French campaign.  Like my Huguenots they have both had units added as figures have taken my fancy or matched what I could afford.


The 1513 force is as much a late medieval army as an early renaissance and it doesn’t appear in the standard lists in Neil’s book. Likewise his French army is very much Italian Wars and not Northern Europe. I therefore had to do some work on them before we started playing.

There’s a mid-late Tudor army in there so I used that as the basis for the English. I needed to add bill units (counted them as “swordsmen” as Neil doesn’t have a halberdier category) and I put in landsknechts and Burgundians. I then took out  the Irish units and ended up with a list that gives me an army that looks like this:


The French list is okay as you can ignore the southern campaign troops and focus on those more widely available, although I did weaken in my army selection to let them have Swiss rather than landsknecht.

On the face of it the French look really strong. They have better armour, better quality troops and more missile armed units as well.

We had four players plus me. So whilst I went and put the kettle on they sorted out their layouts and battle plans. 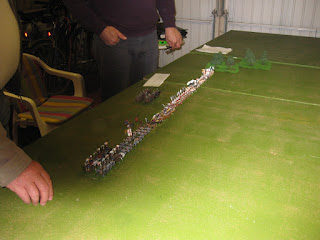 The English contemplate their formation. There's obviously a plan to anchor one wing on the wood, but exactly what troops should go out there? They ended up with most of the English foot on that flank, with the demilancers as a reserve in the middle, behind the line. Their right centre was held by archers and artillery, leaving the right flank to the landsknechts and Burgundians.

The French put the Swiss out on their right with the Stradiots between them. The centre was held by Argoulets and "Archers", with the artillery. The left wing was covered by the Francs Archers and the Gendarmes. 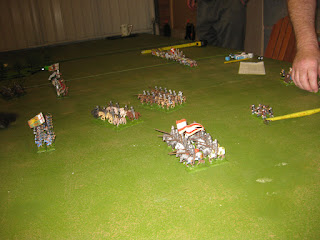 The opening moves of the game. The French have gone at it with aggression and some thought. The "Archers" are masked by the Argoulets who are softening up the English longbowmen with their cross bows before the "Archers" charge home. The Gendarmes have gone off at some pace in an attempt to turn the line. 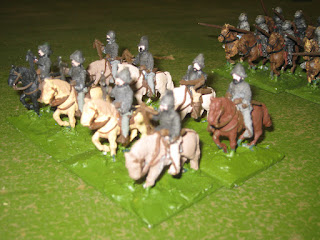 Here's a shot of the brave Argoulets shielding the...what shall we say "careful" Archers from the longbows. I think this approach may have had wider ramifications for the French as it showed a slightly less than gung-ho attitude. 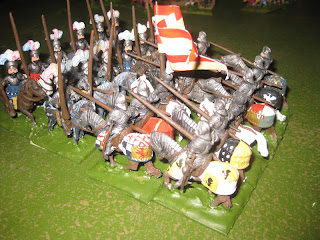 On the French left the Gendarmes engaged closely with the Burgundians. This proved to be an evenly matched contest, despite the Gendarmes having the advantage in both armour and morale. It bogged down into quite a protracted fight, which did not work in the French favour. 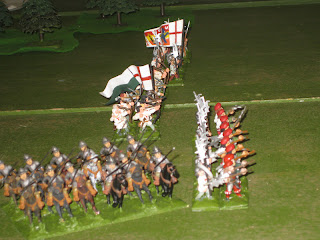 The "Archers" veered round to try an exploit the internal flank, but the demilancers moved across to fill the hole. 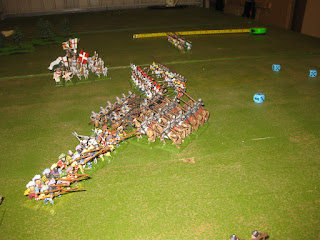 In the distance the Swiss had finally got to grips with their English  opponents, and the Stradiots dived in as well. 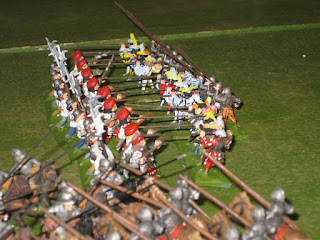 The Swiss and the billmen get stuck into it as the demilancers and Archers start to hack at one another. 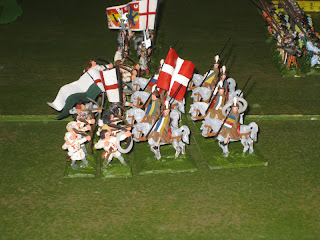 The Stradiots did okay at first, fighting the Longbow men, but soon faded. The six bases v four bases that you get with infantry v cavalry is a big hill for them to climb. 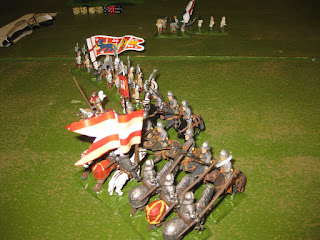 The Gendarmes finally saw off the Burgundians, but by that time it was too late. The demilancers had seen off the Archers with the assistance of the Landsknechts, so it was close to being all up for the French.

The Swiss took a real beating from the Billmen and although they don't need to take morale rolls they were soon no more, - wiped out the the last man. Which was pretty much game over.

Another fun game but there are issues with the rules, and they do not work as well as their Ancient counterparts. I've been using a variant that has the infantry three sections wide, which probably works better for the later period with actual pike and shot. These guys, especially the Swiss, should have been two wide by three deep. The Swiss were a real disappointment although the result is probably right overall. They should perhaps induce a morale roll in their opponents each turn because of the fear factor. On the other hand if the French had got their heavy cavalry in amongst the billmen it would have been a different story.

Some units always turn up a surprise. This time it was the Francs-Archers who, despite their levy class, gave the landsknecht a real run for their money.

So, as indicated before I need to decide if there is a future for these and if I can be bothered to do the necessary work on them.