Many years ago I passed up the opportunity to buy a set of books from my local second hand bookshop. After a couple of months I realised what a mistake I'd made and went back to get them only to find that the shop had closed down.

Imagine my delight, therefore, when I nipped into the Age Concern Second Hand Book Shop in Market Harborough and discovered another complete set at a mere £2 each. I did not make the same mistake again and immediately forked out the folding stuff for them. 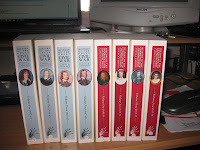 Here they are. All eight volumes of S R Gardiner's history of the Civil War and the Protectorate. Still a classic, still with a pretty good narrative despite a bit of nit-picking in some modern works.

The red-spined ones were the background to my final year at university, so this is certainly a nostalgia buy. The versions I used then weren't this paperback reprint, but the early 1900s originals. Gardiner died before getting to the end of the Protectorate. The books only get to 1656, and were edited and published by C H Firth (after whom Firth Hall is named at my Alma Mater). Firth went on to finish  the story with his "Later years of the Protectorate". Alas I don't have them, and they are a bit more than £2 on Abebooks. 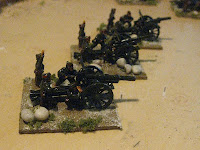 Changing Civil Wars ever so smoothly I have finished my SCW artillery. The Nationalists now have a fine array of Krupp 77mm field guns. These are my favourite (inexpensive) RUGs together with Peter Pig crews. 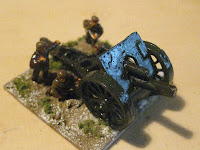 Not to be outdone the Republic has taken delivery of some chunky looking howitzers.152mm it looks like, courtesy of Comrade Stalin. And RUG again.

There are three of them, but I'm just giving you a close up of one.

Completion of the guns lets me move on to some cavalry. I've had a shot at putting together a pack horse with an MG on it. It looks like a load of jerry cans and bits of wire glued to a horse at the moment.

So there you have it. Two Civil Wars for the price of one!

Right, off to put together my bits and pieces for Monday night's game now.