So we had another go at RFCM's "Bayonets and Ideology 2" in an attempt to find a low level Spanish Civil War set of rules. The first game left us with some reservations, but one game isn't enough to make a judgement and it did seem to have something in it.

This time we had a Republican counterattack by some brave International Brigaders against a position held by members of the Tercio. The Republicans were average, supportede by a Renault FT-17 (well, I've got three or four of them and never put them to any use) . The Legion were mostly veteran. The board this time round was another ruined village, with the attack coming from the surreounding olive groves.


Phil deployed his HMG teams opposite Will's in the ruined building, but didn't have enough APs to open fire. His rifle platoon went up the left hand side of the road, from his perspective, to take the undefended objective and to turn Will's flank.

Will opened fire with his HMG's and immediately hit and killed one of Phil's. 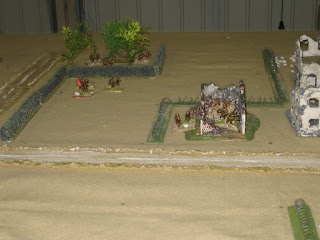 By drawing Will's attention to his right Phil succeeded in getting his troops across tyhe open ground and into the buildings, so he could work his way into the centre. 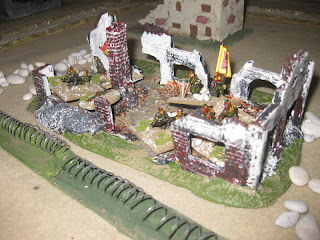 Phil then returned fire on the central HMG nest and managed to hit one of the supporting rifle groups. I understand now why Will put them in there, - it's to take the hits that would otherwise knock out his heavy weapons. 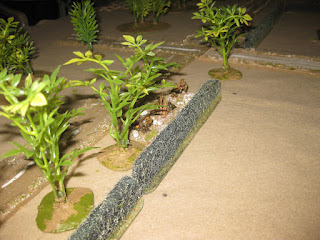 The IB HMG's continued to take damage, but gamely stuck to their task, as both sides scrabbled around to roll for reinforcements. Phil's IB's were luckier in that respect and some reasonable looking extra bits and pieces were assembling on his side of the table. 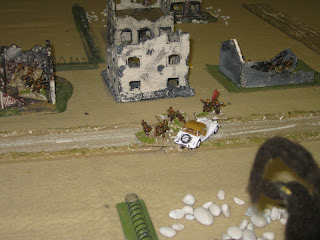 A hail of fire in one turn enabled Phil to pin one of Will's HMG teams (ss the smoke in the bottom right hand corner) so he could start the close assaults, cleverly using the ruined car as cover on the open road. Alas for Phil he'd lost track of the number of turns and he was back to close assaults costing 5 APs, rather than the 3 it takes in turns 2 and 3. 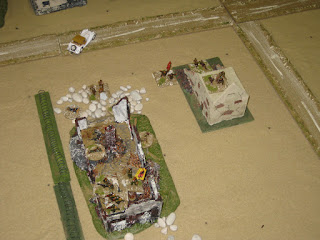 Making used of the pinning effect Phil got a support team across the road as well and launched a close assault, bombing his way into the burnt out building successfully. 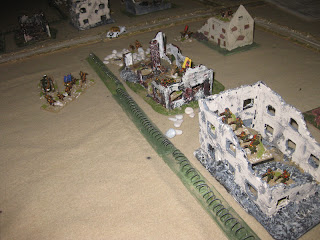 With reinforcements "sneak" moving uip the left hand edge the FT-17 took on the role of mobile pillbox and pulled up to the buildings, providing partial cover to the rifle section with it as they closed on the final defending troops.

Alas I'm light of photos at this point. There was loads of stuff going on over on the left and on the SFL's base line as the reinfiorcements got into the game, but I have no record of it.

The game ended with the IBs having a decent foothold in the village, but the SFL still entrenched in significant positions. The victory points gave the IB's a significant vistory, although it didn't feel like it until we added the numbers up.

Both players professed to have enjoyed the game but I think we will introduce some of our PBI2 amendements to make the game run smoother. These are briefly:

1) Roll both motiovation and AP dice together and chose which is which.
2) Command bases do not count for occupancy
3) Motivated units always get 2 APs minimum
4) Bases moving from cover to cover only pay 1AP. The enhanced cost arises moving into a more open square.

I also need to look at the army lists and special characterisitcs.

But fun none the less.