By way of a change after the posting of painting guides here's a blog about a new subject some of which was written on my new toy, a smart phone. Alas the app proved to be less useful than advertised so I'm back to netbook and dongle to finish it off.

One of our Chris' (we have a few in our group) has been working on the Russo Turkish war of 1877 (or is it 1878, - I should know as it is significant if you ever studied Gladstone, which I did at great length.)
Using Neil Thomas' latest book which covers post Napoleonic 19th Century Europe we had a classic battle of the era. The Turks were defending a town and some entrenchments. The Russians had lots of guns and were attacking in massed columns.

If you're familiar with Neil's work then you'll know what you're going to get. Lots of dice being rolled and lots of casualties.The nineteenth century rules have added sophistication when compared to his earlier period offerings (well, the Ancients book any way). In a way, however, there's a feeling of "Black Powder" about the rules. The core is very simple and the period colour comes in special rules for each army or troop type. Russian troops, for example, are stubborn and pass one morale test for free. They also have to stay and fight in columns throughout the game. A shade inconvenient when taking on an army with modern firearms.

Ian and I took the Turks and utilised the special rule that allows then to dig in. Which we duly did on the objectives. We then put more troops in the village and set up a firing line across the middle of the board. 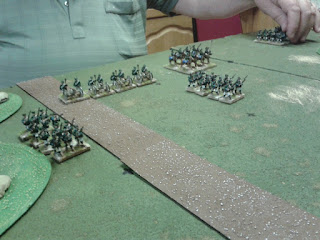 Will & Phil took the Russians. Will got the massed guns opposite my entrenchment and a few columns to attack with. The photos are a bit sparse as I haven't mastered digital closeups in poor lighting with the new phone yet.

As Will approached I softened up his (out of shot) cavalry which enabled me to charge them with my own. Units can normally only charge if they outnumber opponents (although Russian infantry can charge on parity). I roughed up his cossacks pretty well, forcing them to retire and take morale tests (this is new compared to the Ancient set). Alas I ended up in front of one of his columns, so I beat a hasty retreat. 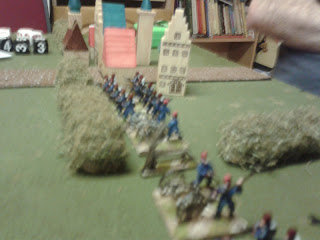 Meanwhile, Ian skulked in the village.

I suffered from Will's artillery bombardment  but when his columns closed I gave them such a mauling they were fit for nothing more than chasing off our Bashi Bazouks, who skipped past them and headed off to the woods so they could shoot up Will's artillery. 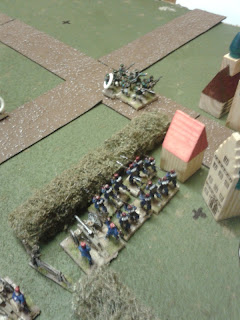 Ian was now under concerted attack from massed columns, which created a target rich environment for him. He got a bit excited as to who to fire at, to be honest. 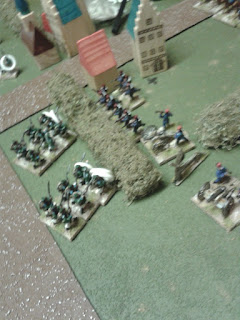 But even so he gave the columns a rough handling and saw them off in fine fashion.

And so we won.

The rules give a fast, playable game. They are subject heavily to the vagaries of the dice, but I've played Shako a few times this year, and suffered a similar fate for the same reasons.Some of the rules strike you as odd at first, - troops in firing lines can't move, for example, - but the overall package sort of works. Not much of this is in my core area of expertise so I can't comment on the historical verisimillitude of the whole affair. However Chris has a two volume Cassal's history of the war written at the time and he's happy with it all.

We all agreed we'd had a good time and encouraged Chris to get some more figures and paint them up. He was more pleased with the former comment than the latter, but which ever way up, we'll be playing them again.
Posted by Trebian at 18:46