In spite of all my recent protestations about lack of painting time I have been able to finish up a couple of units this week.

The first is my opening attempt at a "Taiping Era" unit. These are supposed to be the Ludhiana Sikh Infantry Regiment. They are Irregular Indian Mutiny "Loyal Sikh" figures. The paint scheme is taken from a combination of the three Ospreys that cover the Indian Mutiny (numbers 67, 219 & 268), and Boris Mollo's "The Indian Army" together with a photograph of the regiment in China, taken from Wikipedia. Looking at the picture it seems to me that they have slightly darker trousers than tunics, and that their turbans are of a plain colour. I've therefore concluded that they were in red tunics with blue trousers and a yellow turban with no stripe. Taking Mollo and the Ospreys I've given them green facings and a red stripe down the trousers. No flag, yet, but I'm working on it. 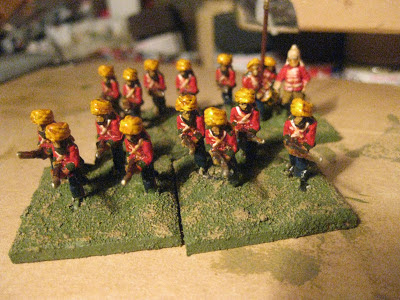 I quite like them. Irregular look a little bit more "rugged" than some other designers, and Ian Kay's policy of making figures with slight variations - the Sikhs have a fine mix of beards - makes them look suitably authentic.

The second unit for your delectation and delight is my second unit of Spanish Civil War cavalry. These are the Peter Pig figures with the rifles (a better pose than the sabre armed figure, I feel). The MG unit is hidden at the back and the cornet doesn't have flag yet, but I think they have shaped up okay. 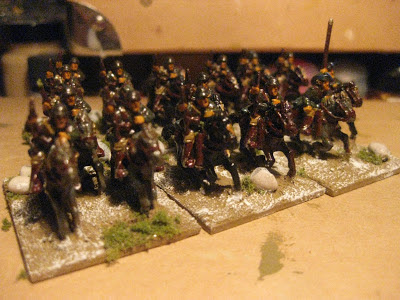 So, what with one thing and another, the week has been quite successful.
Posted by Trebian at 17:54