Back to Derby and I'm warming to the venue. this is probably for two reasons:

1) I've put on an extra layer of clothing
2) There seems to be a lot fewer people out on the track making an awful racket.

I've got my camera with me today with a fully charged battery so I've been able to take a few pictures of the show.

The first game that caught my eye - partly because it was set up next to us - was the RAF wargamers "Bomber Command" game.  I liked the stylish layout that looked like a tactical map and the clever, simple, way of showing searchlights. Mass bombing raids aren't a naturally easy thing to game and i think they've done it really well, as you can see below. 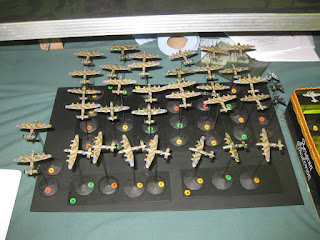 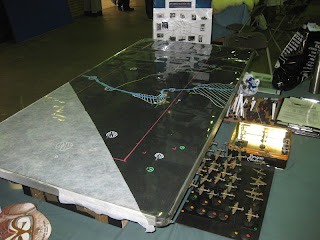 Shows are an occasion to meet up with old friends. First game of the day was with Mark J (on the left in the photo) who I was at university with. He turned up with a friend and they took a side each.Mark took the Egyptians and got a right royal thumping. 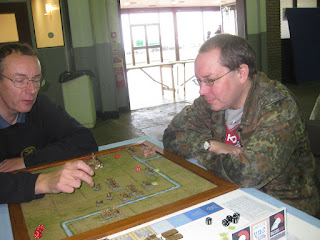 My wander round meant I stumbled upon Pony Wars, run by the "Sons of Simon de Montford" club from Loughborough. Now I remember Pony Wars from the early 80's, run by Ian Beck of the Halifax Club. It broke new ground as a participation game and in Ian I think we had one of the most interesting wargame designers of the time. His sad premature death robbed the hobby of one of its most innovative thinkers. So this is here not because its new, but because it has happy memories. I hear that Pete Berry of Baccus will be re-publishing Pony Wars in the new future. 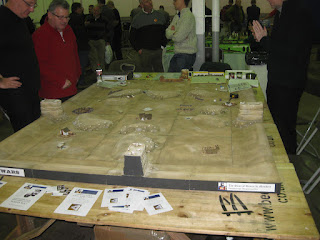 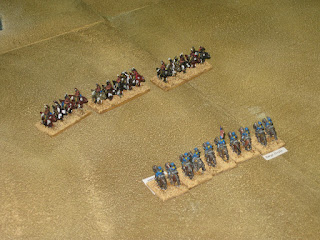 Blimey! A game of "Sink the Bismark" with a big ship and nice toy bits. Shame about the different coloured cloths. 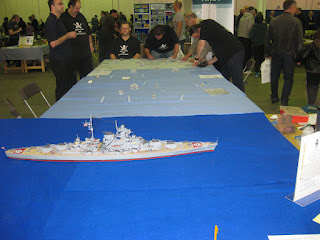 Talking of Baccus, which I did above,  here's a couple of pictures of their "Retreat from Moscow in 25 minutes". Looks great, clever ideas, nice boards and models. 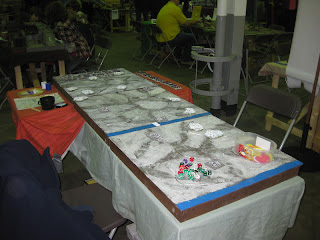 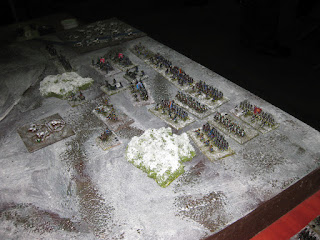 Final photo is of the hall itself. As I said, it's a big soulless space. Still if the other venue has gone you take what you can get. 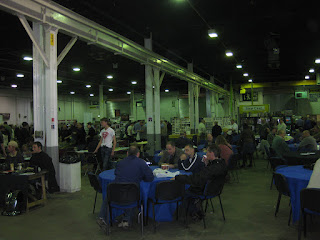