Following our day’s fun and games in the tank shed and taking weapons apart we had dinner in the mess before returning to the bar for a drink and to play a game or two.

I knew there would be about a dozen of us but not having any games of that size I put in a few six player games, one of my own design and one minor classic.

The minor classic was my 15mm version of Ian Beck’s Chariot Racing game. I’ve had this game since…well I’ve had it a long time. Probably nearly 40 years. It uses the first 15mm figures I ever bought. They’re Minifigs Egyptian chariots which I got because they were the only ones that the stand had six of when I went to buy them (I know the Romans only used to race 4 chariots, but you can't have too much of a good thing, can you?)

I first played the game at the Nationals in Sheffield in the early 70’s. At that time the Halifax club were running it in their 20mm scale arena, - the one with the full crowd made up of every Airfix figure you can imagine in scratch built plasticene togas. My mate Derek & I each picked up a copy of the rules, printed out on a Roneo/Gestetner duplicator in that odd blue ink colour with diagrams in pink. How sophisticated.  I’ve still got them, carefully folded up in my chariot box.

The chariots should take up and area of 3x3 squares on the game board, but I drew the board out before I got the chariots and scaled it down from the sizes given for 25mm models. This meant that when I got the chariots they were too big for 3x3, so they are mounted on 3x4. Can’t say it has ever been an issue playing the game. I suppose I could have redrawn the board but it was quite a challenge drawing up the corners and if I’d enlarged the squares they wouldn’t have fitted on the piece of wood I had (which incidentally was the top of a play desk I had before I went to school).

Building the game not only required me to buy my first 15mm figures but also my first percentage dice. Still got them.

That's all I can recall of the construction. I can't remember where I got the mustard-yellow paint for the board. I did this before the invention of "matchpots" so it must have been a colour used to decorate a room in my parents' house but which one I can't remember.

So off to the races then. I was slightly surprised that given the ages of most of the participants no one seemed to have played the game before, but it is really easy to play so everyone picked it up really quickly. 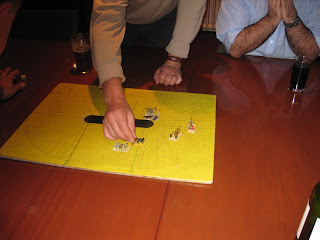 Unlike the multiple laps of the arena in its historical prototype this game only requires two laps and the final straight, which is a good thing. In common with the games we played all those years ago players were soon going round corners too fast and flipping their vehicles over. The photo shows one wrecked on the inside of the first corner.

Tactics in the game split into two camps. Firstly go as fast as possible as close to the spine as possible and hope for the best. If you are lucky you can be half way down the back straight whilst others are cornering. Alternatively you can play it cautiously at the back, avoid crashing and hope to overhaul your opponents in the final corner and straight as their chariots increasingly fall apart. In this case  the latter tactics were ultimately successful with Rob turning in a narrow winner.

After the chariots we played "The Elephant in the Room" which needs no further explanation here. Suffice it to say it was a classic running of the game with three out of six velites a bloody stain on the sand and the elephant crashing to the ground one square from the hastati.

We rounded off the game with Munchkin Cthulhu, which went to prove that there's no such thing as an easy game when everyone has had a skin full. One player kept lamenting that the game was playing him rather than the other way round, which I think is unfair. On the other hand if you're a semi-mad cultist, who's to say?
Posted by Trebian at 07:23