Autumn in the Heavenly Kingdom 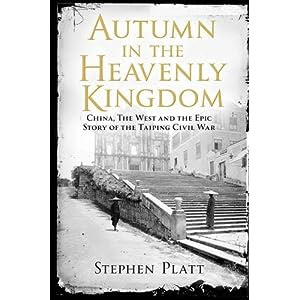 I've just finished this recent modern account of the period of the Taiping Rebellion. It mostly covers the Taiping from its height to its eventual fall. It also tries to put it in a wider context and so covers the Arrow War (or Opium War II if you prefer) as well.

It is written by an American academic which means it is pretty neutral on the wisdom or otherwise of the European interventions although it stretches its thesis to draw parallels with the ACW and the influence of that was on British policy. Nice try, but our ancestors would have tried to open up trade in China regardless of the loss of markets in North America.

Otherwise it is a thoroughly enjoyable book and although written as general history it has a lot in it for the wargamer. The progress of the campaigns is well laid out and there's enough to give you the feel of what is important in the period. It puts the efforts of the Chinese government into their proper context and gives some decent perspective on the Ever Victorious Army (whatever we may want to think the Taiping were brought down by the massive Hunan Army commanded by Chinese officers, not a handful of mixed mercenaries lead by Westerners).

The book pulls off the trick of being both a serious historical monograph and also enormously readable. Mrs T picked it up and read the first few pages and expressed an interest in reading it as well. It is a lot like Orlando Figes' "People's Tragedy" on the Russian Civil War, - for all his faults and the omissions in the book it is well written and really enjoyable. The narrative propels you from page to page towards its inevitable conclusion.

They also share a selection of names guaranteed to confuse any casual reader.

(Since I wrote this I've also finished "The Arrow War" by Douglas Hurd. This is a diplomatic history of the second Opium War, although it does a pretty good job of arguing why the name is wrong and why the war wasn't about Opium. It was written in the 1960s and to some extent it shows its age in the attitudes and views expressed by the author, who later became a Tory Cabinet minister.

I have mixed views on this book. It is well written and does a very good job of navigating the reader through the machinations that started with the seizing of the lorcha "Arrow" and ending with the destruction of the Summer Palace outside Beijing. There are sizable quotations from parliamentary debates and correspondence and these illustrate what was probably the golden age of parliamentary debate in the UK when a well honed speech and argument could turn the House. However the military detail is cursory, which is odd for a book about a war. It is annoying as it is clear that Hurd knows more than he has written down, and the illustrations reproduced in the book mainly cover the military aspects such as the storming of the Taku Forts.

I picked up my copy from the USA via Abe books, second hand ex-library stock so it didn't cost me much. Would I recommend it? Not if you just want military detail but for me, as someone who studied the period in the deep and distant past, I found it enjoyable and informative. )