For someone who has wargamed most of his life I'm pretty poor on the hardware side of things. I can identify most of the major armoured vehicles that Airfix made into kits, and a few others in specific situations. I can get obsessive at times when something is truly important (such as the Garford Putilov in RCW armoured car tactics) but mostly the information doesn't stick.

I'm worse with small arms. A rifle is just a rifle, isn't it? I find weapons only interesting when they have a real impact or are game changers. The Enfield rifle at the time of the Indian Mutiny, the Martini Henry with its bullet that can stop an on rushing Dervish, the SMLE and since the Second World War the AK47.

Anyway, I got more than my fill of the real thing last weekend at the Heavy Metal day as we were allowed into the armoury, with its 1400 working firearms starting with the 18th century tower musket and coming right up to date with guns that don't even look like guns.

Given my level of ignorance, the photographs are fairly random. They're also fairly dark as the lighting wasn't functioning on the day we were there. 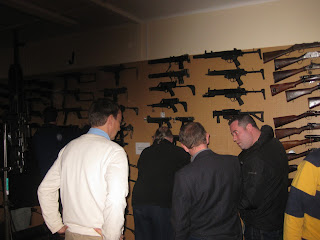 What made this particularly interesting was not only that the guns were all functioning, but also that you could take them down and have a really good look at them, as long as you didn't cock them (damages the spring if you forget when you put it back).

I have fired black powder muskets and shot guns on a number of occasions, but I had not realised how heavy some modern weapons are. We looked at a modern sniper rifle that I swear was heavier than a Lewis Gun. On the other hand the SA80s of this world and equivalent are light and handy in comparison. 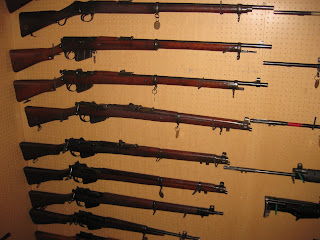 This wall has a wide variety of various British magazine rifles from the last century and as such would be the weapons both my father and grandfather were trained to fire. 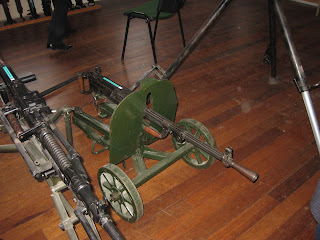 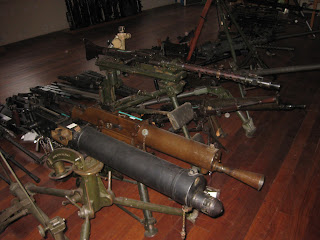 As you can see from these two pictures they don't just have rifles but a fair number of crew served weapons from a wide variety of jurisdictions. Same with the rifles and SMGs, - any one we've fought we've obviously brought back trophies. I understand that the WW2 German weapond are still fired from time to time using contemporary ammunition.

The pistol room had a good selection, including one of these: 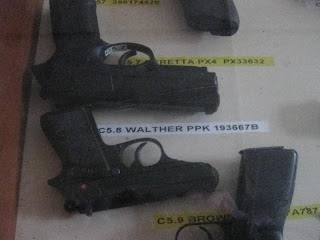 It's rather small, Mr Bond. 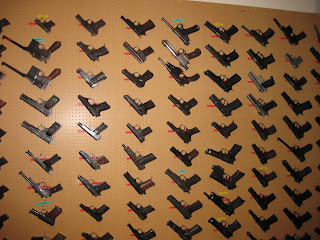 The main pistol wall has an odd aspect to it. Almost like a collection of metallic butterflies pinned to the wall. 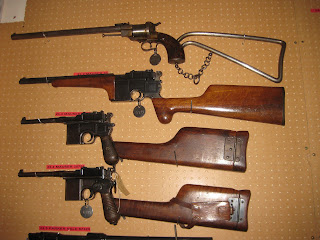 And who wouldn't want one of these? 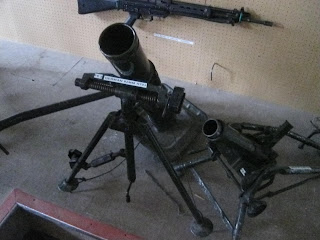 Mortar the point (!) what about one of these? Surprisingly short I don't think this is the standard model. 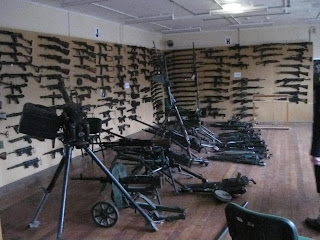 This array is interesting for the anti-aircraft mounts. The far left corner has all of the muzzle loading muskets and rifles, including not just the Black Bess, but also the Baker Rifle. All complete with original ramrods.

The visit was enhanced by the presence of the curator who has fairly robust views on a range of firearms realted subjects, particulalry around design and selection for service. And of course our host who had practical experience of a number of them, - although I was surprised when he remarked that the weapon he had most experience with was the AK47, due to his service in Iraq.
Posted by Trebian at 08:39