More from the Far East

Having a pretty good run on the painting front recently, finishing another Chinese unit. 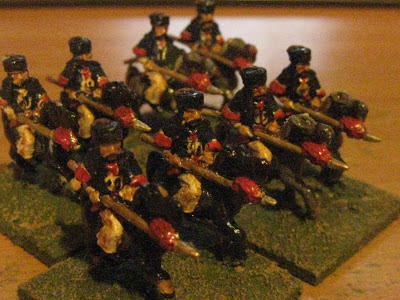 Again these are Irregular from the Colonial range, being the Chinese Lancers. The photo is a bit dark, I'm afraid.

The design of the figures is a bit of a mix. They're supposed to be Bannerman or regular Qing cavalry, I think (ie not Mongols). The have the right sort of tunics, mostly, and many of them have the chest roundel with name and unit designation on them. Ideally they should have a bow and a matchlock but I think leaving them off may be a wise decision or the figure may look overloaded. Ian also makes a mounted archer figure to go with them.

I'm quite pleased with the look of them now they are done. I'll need to find another supplier for my Mongol cavalry. These'll probably be Museum Miniatures, - I asked about height comparisons on TMP here: http://theminiaturespage.com/boards/msg.mv?id=285477).

I'm afraid to say that the biggest problem with them is the hair. They have side pig tails but long flowing hair at the back. Qing troops all had pig-tails and shaven foreheads. Taiping's didn't and hence were known as "long hairs". The archer figure seems to have his hair tied in a queue so I think these should have as well. In fact they have side pigtails as well as hair at the back.

None the less I shall persist with them. They have a suitably business like air about them and have proved surprisingly easy to paint, whether that is design or my chosen colour scheme I don't know but I've knocked these out in a week, which is a good rate for me at the moment. Their basing alos marks a departure for me as I've gone for two figures on a 30mm square base, rather than the normal 3 on a 30mm x 40mm. Phil has been talking about this for a while and up until now I've ignored him, but this looks right. it gives me the same frontage as the foot, but with half the figures.

Having got these done I've cleaned up and undercoated a unit of the cavalry archers plus some foot archers and halberdiers as well. Progress is being made.
Posted by Trebian at 07:17