Following on from “Guns, guns, guns” I thought I’d share with you these few photographs.

The Armoury as remarked before has a lot of different guns including the iconic AK47, - probably not the most difficult one to have got hold of. I walked past it at first and didn’t realise what it was as it didn’t have the magazine in place. Shows what I know about firearms.

Anyway the curator went off and found a magazine and we were soon passing it round because doesn’t everyone want to hold an AK47 at some time in their life. From the photos in the paper and the pictures on the news don’t you sometimes wonder if you’re the only person in the world who hasn’t got one tucked away somewhere.*

Having passed it round Tom showed me how to take it apart. It is as easy to take apart as its reputation. There’s a button just above the stock that you press in and it slides apart. The firing mechanism is very simple and safe so even for an amateur and butter-fingers like myself it comes apart quite easily but without the danger that it’ll simply fall apart in combat.

After that Tom handed me an SA-80. The merits or otherwise of this weapon have been hotly debated. Personally as a left hander I’m not a fan. I have shown myself unable to shoot straight left handed so with a weapon that makes me fire from the wrong side or get hot metal stuck up my nose my effectiveness woul;d be reduced even more. (For those of you interested in the political correctness debate and discrimination I think I should point out here that left-handers are the last hidden minority that is routinely discriminated against without anyone complaining).

Taking the SA80 apart was much more involved and isn’t something you could do in a hurry if you aren’t properly trained or maybe even at all if you have below average manual dexterity. Eventually between us I took out about one piece and Tom did the rest, and here it is laid out for inspection. 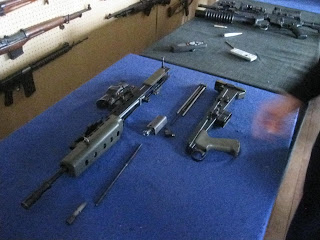 On the other hand I am a fan of the optical site on the SA80, and it is a nice size and weight to cart about. With the sling attached it fits snuggly under the armpit and doesn’t hang down far enough to trip anybody up. As was remarked, compared to the SLR it is a positively unobtrusive and manageable weapon.

What I didn’t realise (again, shows what I know) is that it suffers from the light-weight bullet syndrome. I think that it fires a 5.56mm round, compared to the 7.62mm in the SLR (equivalent to the .303 in the Lee-Enfield). When you consider that the Martini-Henry fired a .45 round this is quite a reduction in weight of shot and comes with a commensurate lack of stopping power and accuracy at longer ranges.
Good job our lads aren’t firing at Zulus and Dervishes any more.

*Whenever I see parts of the world where the AK47 is this year’s de rigeur fashion accessory I am reminded of a comment by an economist at UBS when asked what to invest in should the Euro look like it was going to collapse. His reply was “Buy precious metals, - and that includes guns & tinned food”.
Posted by Trebian at 18:17