What does a wargamer do with a redundancy cheque?

So, what should he do?

In my case I have brought forward what I was going to spend some of my retirement tax free lump sum on. I am having a wargames room put in the garden,

Well, when I say "wargames room" I mean a big shed. A big shed with insulation and power. Like model railway buffs have. Only bigger.

The base was laid a week or so ago, and that looked larger than expected. At that point I was wondering whether I had been entirely sensible and may have over done it a bit. 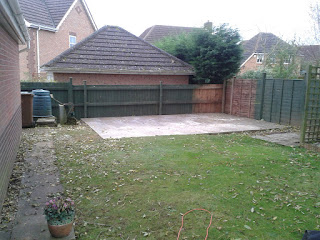 It's quite a big area, as you can see. You can also see where I haven't painted the fence as my old garden shed was in the way.

This project has been slow moving and slightly fraught. We have a slight slope at that end of the garden and the builders wanted to charge silly money to do it (more than the price of the shed!), until Mrs T remembered that someone we knew years ago as a fellow parent at the village school had divorced and remarried a builder. He came in with a decent quote, and also was able to do the insulation for me. That was more than expected, but if I have to do it, it will take me months as I'll probably only get to spend only the odd half day at the weekend on it. Mrs T also tracked down an electrician who gave us a very reasonable quote for running in power and light. So with that and the insulation it'll be quite cosy for a winter's evenings's gaming.

We aren't at that stage yet. Delivery of the pieces was on Thursday, in the pouring rain. Luckily we had some large plastic tarpaulins to cover the big heap of bits with. Then the builder came on Friday, when it was cold but dry.

So, here it is. Not insulated and no power yet, but the unit itself is fully assembled (door needs some work as it won't lock). There's a piece of external edging board missing but that shouldn't be an issue and it is mainly for decoration and neatness anyway. 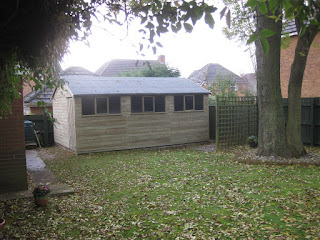 There is some debate as to what it is. I bought it from a company called "UK Garden Buildings", which seems to be a catch all title. It's a shed in their catalogue, but I think it is leaning towards "outhouse" in size. A colleague at work suggested "man room" or even "man cave".

For the moment it's the shed.

More updates as progress is made.
Posted by Trebian at 10:00