Spent an hour or two this morning drawing flags for my British in China. I thought I might do them all at the same time and then mount them up en masse when the army is finished. Or something like that.

Anyway, they're in 15mm scale, so are about 1cm square. That means I can get all of them on one sheet of A4 easily, so I can print one sheet, and then cut them out as I go along.

When I say "drawing" I mean putting together on my PC, but more of that later.

Wargamers love flags on their units, - well, I know I do. Fluttering away, distinguishing one generically painted unit in uniform from another. The best flags of our group are hand painted by Phil, which is something I've remarked upon before. Alas I'm not good enough to do that anymore, if I ever was. For the less talented amongst us we have a semi-detached member of the MNG as well, Graham Fordham, who does them on brass poles and sells under the name of "Fluttering Flags".

I noticed on the Colonial Yahoo group recently someone asking for British flags from the Boxer Rebellion. He was referred to Warflags, which I checked out as well, but there are no British 19th Century flags on the site. I wonder what he'll end up doing?

I don't think people realise how easy it is to do your own flags on the PC. I use two packages, both from Serif, "Drawplus" and "Photoplus". The former is a geometric drawing package which lets you combine and crop various shapes together, change line textures and so on. The other is a Photoshop type package, that enables you to recolour photos and other pictures from the web. 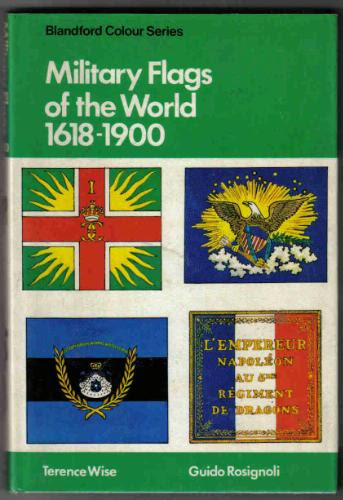 My main source for this batch of flags has been Terry Wise's "Military Flags of the World". I got mine in a remainder bookshop years ago, quite by chance. You can buy it second hand for next to nothing, and it's an absolute gem. Terry only has a few flags for each army*, but he gives you enough information to extrapolate flags for most other units in the same army once you've done some basic research (like compiling facing colours).

Anyhow, I've never understood people's problems with flags of the British Army. They're mostly simple with geometric or repeated shapes. That means once you've put together one you just chop and change bits and recolour to produce others. As you go through them you develop a library of pieces you can redraw. The Union flag, for example, is a bit of a pig to do at first, but once you have it done it re sizes into a canton on any other flags you do. Likewise with the central wreath common on the 1844 pattern flags and onwards.

The real challenge is if there's any real "artwork" on the flag. For example the Lamb and Flag on the 2nd Queen's Regimental colour. This is where Photoplus comes in, - you only have to find a picture on line and recolour the background to match your flag colour (easy to do with HSL sliders) and away you go.

Not all of my flags end up being completely accurate, but then a lot of my regiments are generic anyway (like the "Forfeitshire Regiment" who have been wiped out in the Sudan several times). Plus, I do the drawings at a large magnification and once they are reduced to 10mm x 10mm it's quite hard to read the regimental number let alone the regimental name on the roundel. The benefit is, of course, that if you do the work you can scale up for 20mm or 25mm armies as well.

Anyway, once they're done I'll save them as a pdf and post them up the top here, if anyone asks nicely enough.

Now, back to the "drawing board".


* And the 55th turn up a lot, so I guess Terry lived near the regimental museum or something similar.
Posted by Trebian at 17:21