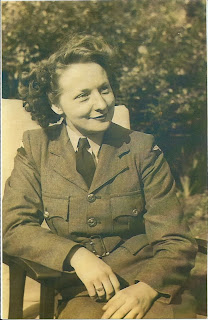 My mother died on Saturday afternoon, less than three months after my father's passing. She had been in a lot of discomfort and pain. The last few months have been very difficult. She went into care in February and did not take to it at all well. She wanted other options which we were unable to arrange and argued with us constantly. My relationship, and that of my wife, with her has been very strained although I think we were back on good terms at the end.

Unlike with my father most of the family, including two grandchildren, were able to get to the hospital to say goodbye. She was in a lot of pain and quite confused, so it was a difficult few hours until the pain killers took effect and she was able to drift away. I hope no one will think I am a bad person when I say that in the end it has been a relief for all of us, my mother included.

My mother was 87. She was the youngest of five, and the last to die. Her early life wasn't easy. Before she was born her family were comfortably off and made their money through the licensing trade. Due to a combination of ill health and ill luck  - the introduction of opening hours during the Great War and the founding of a Methodist Chapel just down the road from their pub in Harrow impacted their business badly. Her father died when she was quite young (he had poor health and was not fit enough to be conscripted in the Great War), and even before he diead they were struggling to make rent payments. The concept of new clothes was alien to her her at that time and she did not go to school on a several occasions because she had no shoes. Her older brother and sister had to club together to ensure that was enough for her and that she did not go completely presentless on birthdays and at Christmas. With no money in the family she had to leave school and get work as soon as she could. These days she would have gone through to university and joined a profession. Whilst the War blighted my father's university career, poverty and a lack of academic expectation for women meant my mother never had one.

Although the picture shows her in uniform she didn't serve in the armed forces during the last war as she was too young. She did do war work, however, making soldiers' underwear and then assembling earpieces for submarine intercoms. She was quite petite and her fingers were nimble enough to do the intricate work.

After the war she worked in Dolcis in Regent Street, where she made up for her earlier clothing disappointments by shopping at lunchtime. She had to put a padlock on her wardrobe to stop her sisters borrowing them. Then one lunch time, fed up with it all, she went down the street and volunteered for the WAAFs. Her family were horrified. Her initial experience in the training camp made her feel she may have made a mistake, but she did enjoy her time and trained as a teleprinter operator. After she left the forces this training enabled her to get a job in the forex department of Barclays, passing trade details and news back and forth with counterparts and Reuters. It was while she worked here she was introduced to my father by a mutual acquaintance. She was always pleased to tell us that she earned much more money than he did when they met.

My strongest early memories of her are of walks by the river, -we lived in Windsor - and illness. In those days you were guaranteed to get measles and the only treatment was to be given pain relief ("Alupent" if I recall correctly) and to have your mother sit and hold your hand. Then I fell down stairs and split my head open. I needed a lot of stitches. It was the only time I ever saw my mother lose it, there was so much blood. Otherwise she was always the most self possessed but loving person.

Her influence on me is more difficult to quantify than that of my father's. She loved words and puzzles. She did the big Daily Mail crossword every week until she could no longer see well enough to do so. She was a superb Scrabble player, regularly beating my father, much to his frustration.

She loved games, - dominoes, Whot, cribbage, Newmarket, anything else we could teach her (although she always had a flexible attitude to board game rules). She loved them not just for the fun of playing them, but because they bring people together. Christmas, with a glass of port/brandy/whatever, the family round the table, playing Newmarket was her idea of a perfect evening. Family and games, - I get that from her more than from my father whose family enjoyed themselves, but were much more proper. Christmas with my parents and one or more of my mother's siblings and children could be overwhelming. They gave Mrs T's father a migraine the one time he joined us. Yes, she liked a drink as well. If we were ever going over to see her she always seemed to check her drinks cabinet first and let us know what she needed to top it up. Always the good stuff too.

And she was a fighter. Not just to overcome her initial difficulties, but generally. She could complain, - not like my father, but just as effectively. In her late 30s before I even went to school she was diagnosed with breast cancer. She survived a mastectomy and radiotherapy and whatever passed for drug treatment in the early 1960s and fought back. She used to complain she never had enough clothes, but she always looked stylish, whatever she had on.

Her other main interest (apart from "Bargain Hunt", which I believe is compulsory once you are over 70) was bird watching. I never did get that as an idea, but luckily my brother did.

To say I will miss her is obviously inadequate.

So I will just say goodbye, and thank you.