The point of the Sumerian armies project was to combine the Hat boxes with the AMW rules get a nice looking quick hit for a new period. I wanted something self contained that I could just do without too much fuss.

After a couple of games it was clear to me that I really needed a few more units give the armies more flexibility in their usage. I was also not happy with the way the figure mix had ended up. I was happy to go with Neil Thomas & AMW at first, but after a bit of digging (and getting my hands on Stillman & Tallis) things didn't look right. Ian RL mentioned he thought the armies were light on archers, - NT only allows them as massed archery units in the Akkadian armies, and no skirmishers. This just doesn't feel right & doesn't match thinking elsewhere and what little we seem to know.

Most of what I know is taken from secondary sources, and although we have some graphical evidence and archaeological findings it is quite clear everyone is guessing. Poking round in army lists for other rule sets there's not too much of a consensus, except on those lovely boys with the big shields (except for some bloke who has posted pictures of his 28mm guys using the big, 9 boss, shields as light troops or similar). I mean, we're not even sure if the chariot is fore and aft with the crew or side by side, and we have pictures of them.

It might be an unworthy thought but it looks to me as if army lists have had unit types added to ensure the armies are viable when played on the table top. Are the archers skirmishers, light infantry, "auxilia" or some kind of heavy infantry? We don't know for certain. Perhaps they're both.

So, very rarely for me, some of my finished figures have been rebased. Twice. Lucky for me I'm using my minimalist technique, and not the full-on polyfilla version. I'm also fortunate as I'm playing in my own little world and don't have to conform with anyone else's figures.

Plus I'm painting 20mm plastic figures. Not really compatible with what proper wargamers use anyway.

I've also started doing a few conversions. The packets are woefully short on bowmen, - a mere 8 in each - but fruitful in the area of javelin men. Consequently some of those Gutian Warriors are acquiring quivers and finding their javelins now look a little bit like bows. 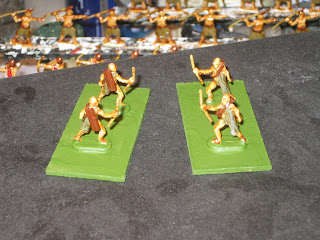 The quivers are made from cutting up sprue, the cross belts are paper.The project has dsort of groun to a halt or now as I've run out of bases. I originally bought 60mm x 20mm for my archers. Changing to 60mm x 30mm and reducing figure ensity mans I need to restock on the larger size.

This is turning out to be more involved than I thought initially.

Final comment - I shall be at the Derby show this weekend on the Society of Ancients stand with Phil. I'll be doing "Call it Qids" (probably) and he'll be doing DBA Bosworth in 54mm. Be good to see some of you there.