As the first of our now regular Monday Night games on a Wednesday we had a special request to try the Sumerians with Armati. Will thought, after last week's game, that Armati would fit the bill perfectly. Phil thought that Armati for the Biblical Period was broken. Ian thought he didn't really understand how these things work. I thought where am I going to get Army Lists from? I don't know what Chris thought, but he turned up anyway.

I based the troop types initially on the Akkad list posted on Warfloot. My figures are based up slightly differently, anyway (too much SI, not enough LI) so it was always going to be different. Furthermore I needed to address one of the more gross distortions that arise in Biblical Armati (ie that non-key light troops make short shrift of key chariot units).

All of this sounds much more technical and a lot less fun than I'd normally like. Still, armed with the official explanation of how Armati troops values are calculated, I set to working out a couple of lists, one with earlier shielded infantry, and one with cloaks for protection. I mainly focussed on balancing the core units. The bonus units would have to rely on what I'd actually got.

In the early period units are pretty lightweight. No serious heavy cavalry and so on, so the most a unit comes out at is 8 points. This means that in an army where you are picking 95 points in the core and a bonus list of up to 70 points you need a lot of units to make up the numbers.

The only change I made to the normal army listings was to make Light Infantry Key Units.

So I ended up with two lists, a "Sumerian" and an "Akkadian". Shielded Infantry have an Fv of 5, and +2 prot, Cloaked Infantry are FV 6, 1 prot. I made battle carts Medium Chariots, FV3, but with impetus.

We had a good turnout, with Ian and Chris taking on Will and Phil. I'd initially partnered Ian and did the deployment, but got out of it when it looked like it was going to fall apart just as Chris arrived. With cake.. 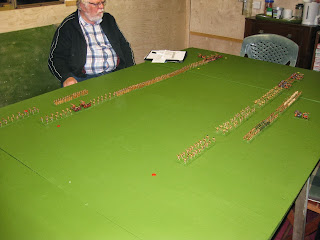 Will went for a big long line. I went for my Heavy Infantry being screened by lots of skirmishers.

There wasn't a lot of tactical finesse. We started off with a slightly staggered approach. 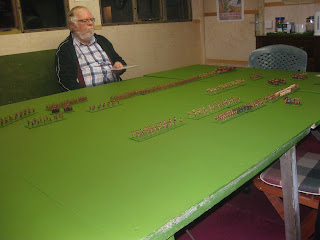 The units being held back have got bows mixed in with them, and we were hoping to make dents with these as Will closed the distance. No point in us advancing and reducing the number of turns archery we would get in.

You'll note, if you count them up, that Will's army has an extra chariot unit. We had more LI bows to compensate. Ian had charge of the right flank and decided to take on the whole of Will's left flank (commanded by Phil) with just his light infantry javelins. 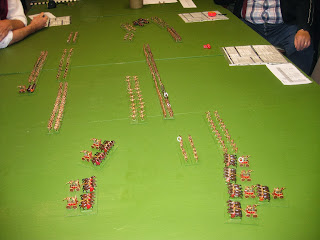 This might seem a bit daft, but Ian knew what he was doing, and continued to roll 5s & 6s consistently. Will and Phil were really under the cosh on this flank. Alas at the far end of the table Chris was unable to make his preponderance of archery prevail. 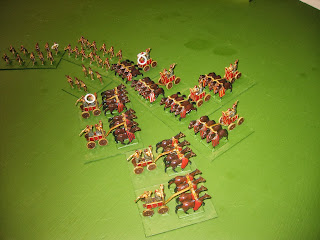 Ian got his chariots into action and managed to absorb a lot of combat with his lights. Eventually he won through, breaking all Phil's chariots and killing his general, for the loss of his light infantry. 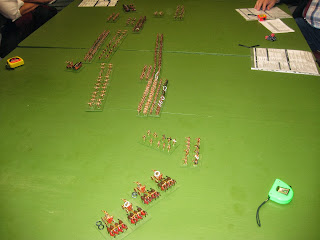 However in order to exploit this victory he needed to get out of the way of Phil's other troops and turn his battle carts round, before being taken in the flank and rear.

And then Ian & Chris lost two Light Infantry units on the far flank and the army broke.

All the issues with Biblical Armati (and, indeed, the rather tortuous geometry of it) came back to bite us. Phil summed up the problems with my making LI key succinctly, and made another sensible solution (allowing chariots to have impetus against ALL units in the first round of contact that they outscore).

However the general mood of the meeting was that we'd had a better game with AMW variant the previous week. Phil wants to have a go without the squares, which I'll need to do a bit of work on to keep the other changes I've made. That'll be a week or so. NQM next week, and then the following week is the funeral, so no game then. Perhaps early November.

Can't beat a shieldwall tho': 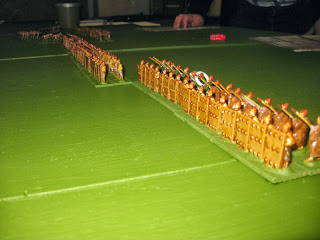