What every wargamer wants

Based on the amount of coverage in the review pages of wargames magazines and the advertising on TMP it is clear that what all wargamers want are large wargames figures. 28mm for preference.

As a historical wargamer writing a blog this presents me with a slight issue. Apart from amazons (who are mythical) very little of this nature tends to turn up in my periods of interest.

Those of us who own a copy of Duncan Head's seminal "Armies of the Macedonian and Punic Wars" will be familiar with illustration 94, "Indian Palace Guardswoman". Although Duncan clearly states that is is doubtful that such units ever saw action on the battlefield that doesn't stop people making models of them.

Furthermore, if you happen to buy four boxes of Hat figures, where you get one female guardsman on a sprue, and there are four sprues in a box you end up with 16 figures.

Which is enough, exactly, for an infantry unit. So here they are: 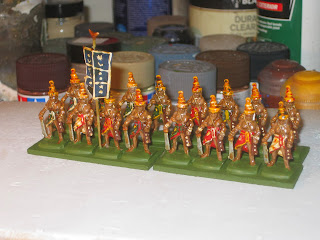 I think I should also note at this point that they probably served as cavalry when outside the palace. Still, that's a heavy infantry unit and if I bury it at the back of the army who's to notice.

And in other news, just finished a command chariot. 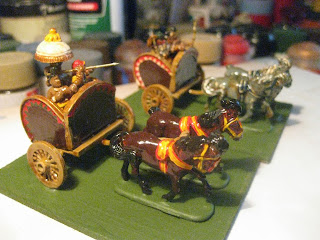 You can tell he's in command, 'cos he's got an umbrella.