A month or so ago Phil said "Richard Lockwood wants to come up to play a game or two. Who's interested?". Well, in the absence of paid employment, why wouldn't you want to spend a day wargaming with the Society of Ancient's finest? Richard does excellent work putting on the SoA battleday each year and he always has an interesting view on a subject or a game.So I said "Why not? We can use Shedquarters".

So that's what we did yesterday.

As it was a full day's wargaming it'll take me a while to blog about all of it (if I get round to it), so this'll do as a summary.

Starting in the morning each of us put on a game.

Mine was a refight of Hydaspes using AMW, featuring my newly painted Hat Indians. Richard was Porus, Phil was Alexander. Classical Indians is one of Richard's favourite armies, so hopefully he wasn't too disappointed by being on the end of another caning from Alexander. The Indians had 6 units of elephants so I toned down their effectiveness to ensure the game lasted more than 30 minutes.

They looked happy enough at the end of the game.

After a break for a bite to eat it was Richard's turn. He'd brought along his War of Spanish Succession 15mm armies. He is running an on-going project using C S Grant's "The War Game Rules". For this game he also took a scenario from the Grant/Asquith scenarios book. Phil was defending as the French, with me attacking as the Allies.

The War Game Rules are a very old school style single figure game, and Richard is adapting them to use with multiple figure bases. We did not reach a full conclusion when Richard called time, but I think Phil was winning. There's nothing really wrong with "The War Game Rules" in its core mechanisms, although you can argue with some of the interpretations and outcomes. However, as Phil puts it, "We have better ways of doing this now". Even so a really enjoyable afternoon's gaming.

Following a quick tidy up we went down one of the village pubs along with Mrs T for an evening meal, before returning for Phil's contribution.

For the final game of the day we were joined in th evening by three more of the Monday Night Group. This added two Chrises (A&W) and a Richard. They were split up so that we had a Chris & Richard on each side. Phil ran the scenario and I did the rule mechanisms (using original "AK47 Republic"). Chris and Richard played the Soviets and Richard and Chris played NATO.

Phil gave us a light hearted ice bound escapade with lots of nice toys and a bit of silliness. In the end it isn't clear who won, but everything blew up, pretty much and there was a lot of laughter. Brilliant way to finish the day off.

We even had a submarine 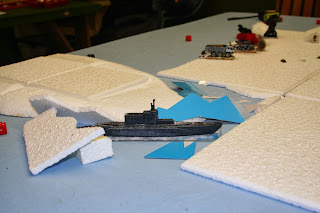