More Assyrians, this time the chariot. It's taken a few days to finish, what with Christmas and all, but it has come up okay I think. 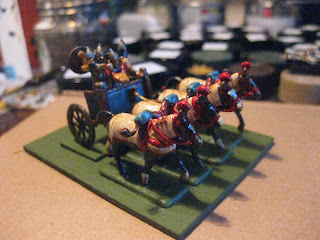 In order to keep the platform level I mounted the chariot itself on a base to get it up to the same height as the horses before I stuck it onto the main base. This is something Phil has urged me to do with other chariots in previous armies, but it hasn't been necessary because of the amount of play in the yoke. This time it sort of became essential. 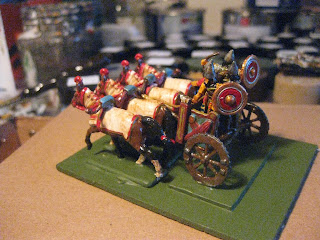 It's a bit of a squeeze getting all of the crew in, but it is worth the effort and they don't look like they couldn't cope if it went into action. 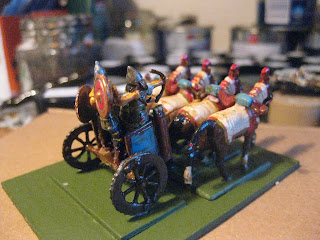 The driver is a nice pose, but there's a lot of plastic between his arms which I might carve out next time round. 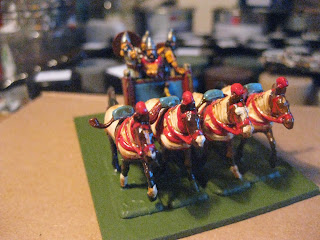 Used lots of my new colours on this one as well.

So, although I don't do reviews, I'll make an exception in this case. There's a review here: PSR Assyrian Chariot Review already, but I feel entitled to my two-penn'orth. As you can see from their picture, the chariot isn't on a base and so slopes back quite a bit. Good decision from me on basing it up, I think.

Anyway, what do I think? Well, it is a nice looking model. The pieces are well realised and the figures have lovely, fine detail and once you get them together I think it looks really, really, nice. Things aren't all rosy, however.

Firstly the plastic is very soft. That isn't a problem for the infantry and cavalry but in anything where you're trying to push pegs into holes, it's an issue. Also, I found, unlike PSR, that it doesn't "fit together pretty well". The holes in the base of the chariot are in the wrong place for the pegs on the yoke. After much wrestling with it in the end I made new holes using a mapping pin. There's no point in even trying to hitch the yoke to the horses with the holes and pegs on the figures. I just carved the pegs off and glued it in place.

The crew don't fit in the chariot if you try to put their pegs in the holes in the base. It isn't clear who goes where and it is really, really, fiddly.  These do not assemble as well as either the Sumerian or Indian chariots.

In a way that isn't a surprise. They're a good deal less "chunky" than the other vehicles, and the detail is finer.

So, what about the positives? Well, it paints up really nicely even with a muppet like me daubing the colours on. The figures are beautifully detailed without being ridiculously over sized or loaded up with deep cuts. They are strongly reminiscent of the old Ral Partha stuff. Once you gut the pins off the crew's feet they superglue into the chariot easily enough.

The big plus is the affordability. I paid about £6 a box from Hannants, and each box has 3 models in it. That's £2 for a four horse, four crew, 25mm chariot. There's no close equivalent from the big suppliers. Warlord Games don't even do a 28mm plastic Assyrian Chariot. Theirs is metal and comes in at £15 per model. That's a huge difference. Even though I could afford to buy them, I say to myself "why"? I even prefer the look of the Hat figures, and at least I can pick up the box once the army's complete without getting a hernia.

So, that's what 2014 holds for me. Another 8 of these chariots, and an awful lot of infantry and cavalry as well.

I might even get round to putting some games on.