A quick posting of some pictures of my first Assyrian light infantry unit.

These are supposed to be Chaldeans based on what I can find. The piant scheme is taken from all over the place, but an especial nod goes to Stillman's "Chariot Wars" which has some nice pictures in it. 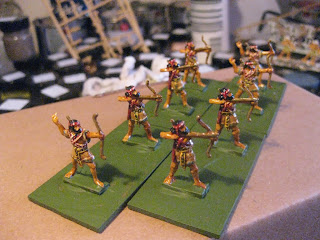 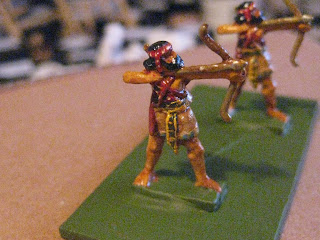 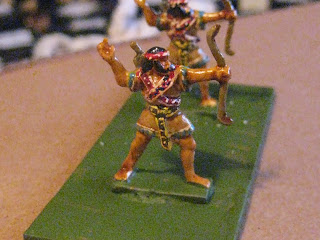 As you can see you get two poses in the box (these are from the Assyrian Allied Infantry box) and a third which has a turban on and is probably meant to be an Aramaean so destined for a different unit..

There's quite a lot of detail on the figures without the designer resorting to putting in a lot of over-sized cuts or highlights, so impressive really. Look at the fingers on the figure who has just released the arrow. Almost makes up for the fact he has no neck.

These are mostly painted using Colour Party paints which have proved to be much easier to use for the detail as their consistency is quite a bit stiffer than both my normal GW & Tamiya. What this means is little pin-pricks of paint stay where they're put.

I've got a unit of Aramaean archers and Assyrian regular infantry with the tall shields on the desk all priomed and ready to go as well.

Now off to Shedquarters to paint some terrain and plan a game for the end of the week.
Posted by Trebian at 12:20