With the Indians finally finished and properly blooded it is time to look at the next project. Actually I have loads of rules to work on with existing projects but it is easier sometimes just to get some stuff out on the painting desk and pretend that the rules will write themselves when they are needed.

Next up in the mega-load of plastic figures I bought in September are the Assyrians. Well, not just the next up as the last left in the box. I mused earlier on, back in September I think, that I might alternate painting these with the Indians. That was a silly idea. It'd just mean doubling the amount of time before either army was finished. Silly, silly, silly, idea. So I did the Indians, although I did a test paint job on some Assyrian cavalry at the same time.

The army units will be based on the Armati 2 army lists, with an eye to using both Armati and AMW.The first units off the blocks are some cavalry - a mixture of archers and spearsmen and also some Royal Guard infantry which are the same mix as well.

The figures are from Hat, again, although they look like they were done by a different designer to the Indians. The figures are a bit slighter in build, with finer detail. For the infantry you also get a choice of three different types of shields. I chose to go with the really big round shields because they're really big.

Having done them, of course, I realised it would be a challenge to fit them all on the base. I achieved it by overlapping the shields, which actually looks quite nice. Have to admit I'm not the greatest shield painter in the world, but these just about pass muster for me. I realise they would be completely unacceptable for a game of "Hail Caesar".

Anyway, here are the pictures: 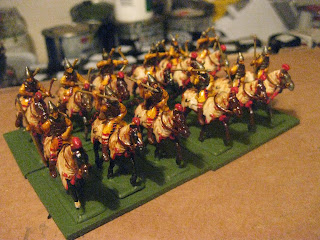 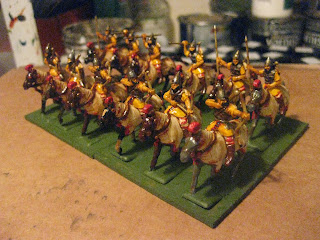 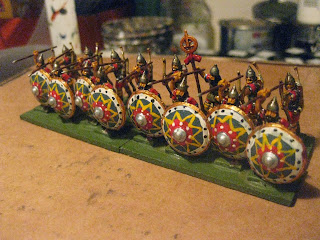 The pictures were taken with a Canon IXUS90 compact camera, using the digital macro setting. This means no flash. The spears were all replaced by pins on all the figures.

They were painted with my normal mix of GW, Tamiya & Dulux. I have become increasingly dissatisfied with the quality of the Tamiya paints recently. They separate out and their adhesion is poor at times. The GW paints are fine, if a bit pricey. All of this means that I have decided to switch to Colour Party paints, which I have previously used for specialist flesh colours. Consequently other units will have slightly different colour schemes.
Posted by Trebian at 16:31