The second game of Shedquarters' day was a Spanish Succession scenario provided by Richard Lockwood. I was really looking forward to this as I have dabbled in the campaigns of Corporal John since my first year at university. My armies are bodged up bits and pieces based round Airfix "Washington's Army" and Napoleonics with hat swaps. Richard's figures are Dixon 15mm, and lots of them. They look really nice.

These shots are taken mostly using a Canon EOS350 with a 75-300mm zoom lens. This lets me do the close ups without getting up from my chair. Like this one of an artillery piece and crew. 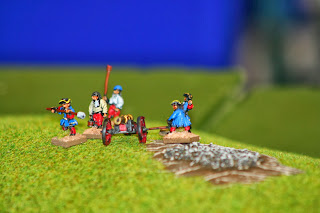 My massed attack columns look a bit tasty, too. Who could possibly resist them? 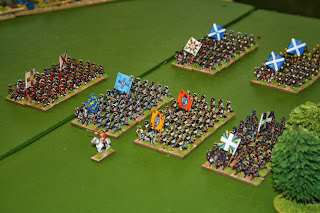 The scenario was that the French were defending a river line, which was fordable in places, and were unaware of a bridge on their left flank when they deployed. The Allied forces were aware of the bridge and had sent a strong flanking force to exploit the opportunity. You can see the force galloping forwards in the picture below. 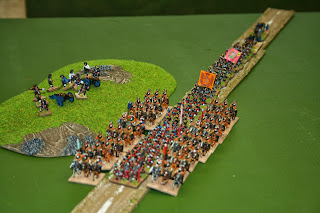 Unfortunately it was a narrow bridge so there was a bit of a traffic jam getting across it which allowed the French to switch their reserves to this flank, effectively neutralising the flanking manoeuvre. They were assisted in this respect by the presence of a rather inconvenient piece of boggy/marshy ground protecting their flank. The overall position several turns into the game looked like this: 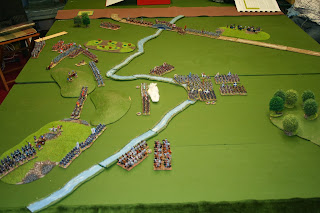 We were using C S Grant's "The War Game rules" which are single figure "Old School" in style. They require written orders and the passing of messages between commanders and units, which is fun, but they also (in common with similar rules of this type) have quite a differential between movement rates and firing ranges. That may be realistic but it does mean that it can take an awful long time for a game to develop as troops take so long to get into position. In this instance, in addition to the flanking manouevre, I launched one infantry assault in column across the centre of the board and a cavalry attack on the left flank. It took over three hours to make serious contact.

In the middle the defenders opened fire with everything they had as soon as they could (no holding on and firing at point blank range here). Shame I didn't have a village to attack as well. 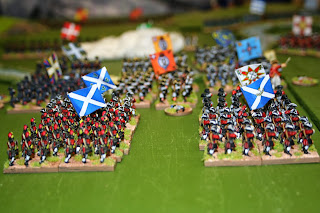 Any how, I braved the hail of shot from the Frenchies and waded across the river in a very Marlburian fashion (so many infantry actions in Marlborough's battles involve fighting across a stream, don't they?), and eschewing the opportunity for a proper fire fight just charged straight in. 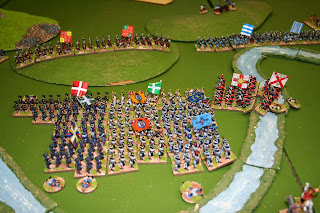 At this point you get this individual figure v figure roll off to see who wins.....meanwhile on the two flanks the cavalry started to get to grips. 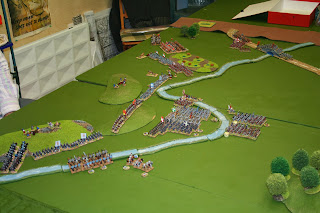 As you can see on my left the defensive fire, assisted by a couple of guns, broke my lead cavalry regiment, but I succeeded in charging home against the defending infantry regiment. This broke, or rather sort of didn't, as it fell back in disarray up the hill where I overran the gun line. Or in someways didn't. It was all a bit odd. Having broken through the middle of the infantry regiment it then didn't collapse in a heap with a general sauve-qui-peut. 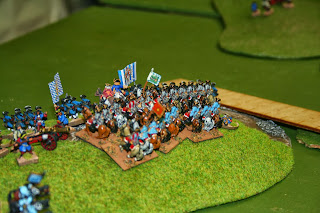 Something similar happened with the infantry attack in the middle. Despite inflicting many hits and having overwhelming numbers all I got was a "retire" result on the Frenchies. 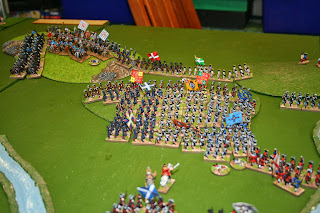 Phil then closed in on the flank of my left hand cavalry as they were hacking their way through the retiring infantry on the hill crest.

At which point we ended the game. I'm not sure which way it would have gone if we had fought it out as the rules were not giving me a feel for Marlburian warfare and the outcomes weren't always in line with expectations. I think they were written more for Seven Years War, but even so it looked a bit odd at times.

This all sounds a bit unsatisfactory, but it shouldn't. We had a very good afternoon's entertainment with some lovely looking armies and we used the battle to chew the fat over what we thought warfare in this period should look like. I was inspired to go back to my bookshelf and refresh my memory of Marlborough's campaigns, and possible to add to my own armies.

I look forward to revisiting the period with Richard's lovely figures and guiding hand before too long.
Posted by Trebian at 13:57

Email ThisBlogThis!Share to TwitterShare to FacebookShare to Pinterest
Labels: War of the Spainsh Succession, wargaming, wargaming in sheds, WSS