Let us start the year as we mean to go on. 1st January, first game in Shedquarters.

A return to the Sumerian grid based game which I first wrote about back in October: Sumerians on Squares. I had made a few notes following that game and found them whilst tidying up during the Christmas period. I also wanted to have a look at the Sumerian campaigns in the hill regions, suppressing uppity tribesmen., and I had worked out how I was going to do the hills. A morning in Shedquarters with some unwanted shelving and an electric jigsaw solved that problem (although at this time of year the paint takes a long time to dry).

Monday Night regulars Will and Phil were both available so we were all set for an evening's entertainment.

Will got the role of the Akkadian punitive expedition intent on burning some villages and teaching the tribesmen a lesson. Phil got to be the freedom loving hill people. The board looked like this: 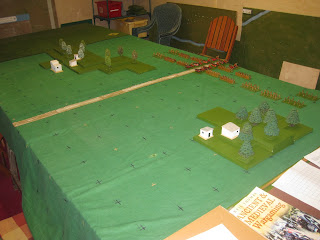 That's the Akkadians on the table. I just realised I didn't take a picture of Will's actual deployment, - he was more towards his left wing, intending to rough up the small hill first whilst refusing the other flank.

The hills are 6" blocks of painted chip board. Each block has  two sides, one with a cross in the middle. This means they can be overlapped and still show clearly where the square is. If a square has two overlapping tiles it has a contour and is steeper than if it's just one square on its own. Hopefully that is clear.

Phil was allowed to deploy concealed in the woods/reverse slopes if he wanted to. Which he did. 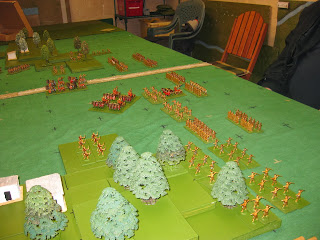 Will's massed light infantry enter the great unknown, whilst his battle carts try to exploit the open terrain, forcing Phil to reveal some heavy troops near the village at the top of the picture. Will also decided to press into the far hills and woods with some heavy troops. This proved to be a frustrating decision for him, and gave him issues for the whole game. He was heard to say at one point "I see why the SS hated fighting partisans". (Under the rule modifications all troop types roll one d6 per base in woods. Heavy infantry have better saving rolls, but they can't manoeuvre very easily, unlike light infantry which can nibble away at the flanks). 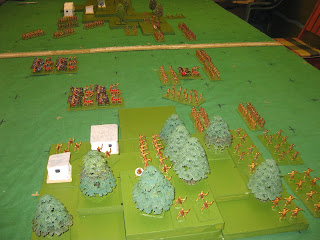 As Will advanced into the wooded slopes near the camera Phil revealed his defending light infantry and an exchange of missiles started. The battle carts stuttered forward unpredictably, as might be expected. 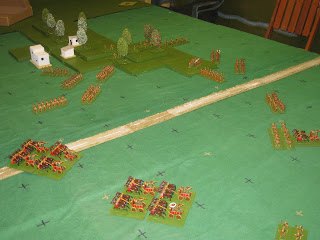 On the far wing the action in the woods hotted up,with the defenders proving quite slippery. The battle carts started to wheel to envelope the defending heavy infantry, and attack the village. 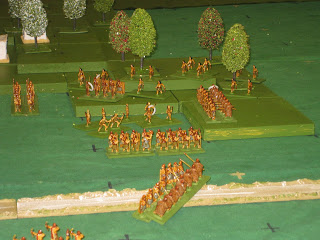 Will really was on the rough end of it in the far woods. His Heavy Infantry were constantly out manoeuvred by Phil's lights and were taking a real pasting. Those light infantry in the middle have just finished off their heavier opponents, chasing them out of the wood. 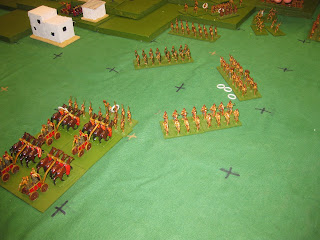 Will's battle carts finally swung round behind Phil's infantry, which had enough time to turn to face (although they lost a base in a "terror test" as the carts rolled up). Phil sort of formed a square to hold off this attack, and we still have problems about how effective the carts should be. They have the best morale and saving roll so this let them take on the infantry fairly effectively from the front, which wasn't my intention. I need to look at the odds and potential outcomes for this type of combat again to see if I've got it right or if Phil just rolled rubbish dice. 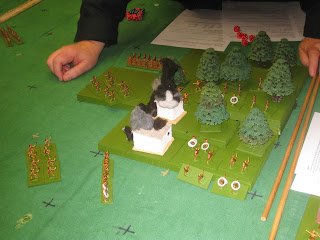 After some hard fighting Will fought his way across the smaller hill, and set fire to the village. Phil had voluntarily pulled out to play tag with one of Will's battle cart units. 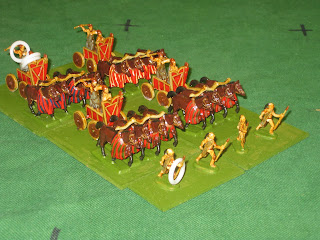 Taken from behind, the light infantry suffered mightily, being reduced to half strength. However.... 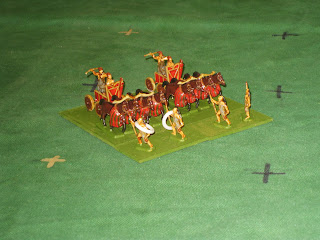 ..in an unbelievable turnaround in the next turn the infantry turned on their tormentors. They inflicted a hit, causing a base to be lost (see in the earlier picture the rear most cart has three rings on it) and then failed the ensuing morale test. Ooo-errr... 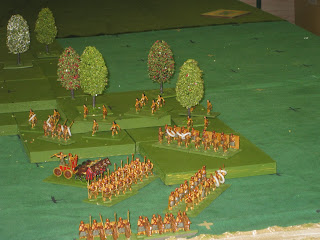 Phil's general now intervened  on the other flank, leading one of his infantry units in a charge on the middle of Will's line. 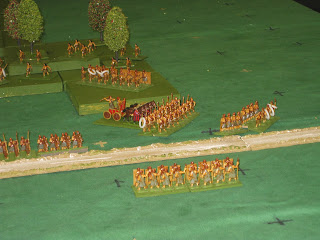 In a series of stunning rounds of combat Phil punched through Will's centre, causing mayhem. 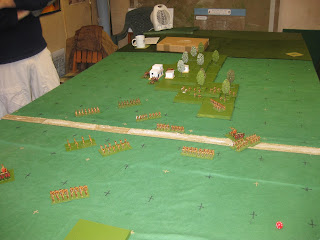 As the game ended Will had succeeded in getting into the far village with his battle carts, but he had taken a lot of casualties, and the dead pile on the edge of the board was looking uncomfortable for him.

We ended at this point in what was probably a draw. Will has achieved half of his victory conditions, (although not quite - his carts can't get at the buildings in the hills, so he destroyed two out of three village squares) but hasn't inflicted more damage on the hill tribes than he has suffered.

A good, fun, game. Some issues for me to fix on how the squares work and on those battle carts, but other wise very pleased with how it went and the look of it.