Richard's first game in Shedquarters, and we're off to Latin America for another game in his American/Mexican campaign. This one was part of the Vera Cruz campaign. For battlefield resolution Richard is using Arty Conliffe's "Shako". I've said before that after a few games I had concluded that I wasn't a fan. This battle didn't do much to change my mind. The fact that I enjoyed it enormously all the way through, even when it looked like I was going to get clobbered, shows that a good scenario, well written briefings (Richard had even written a newspaper announcing the campaign in the US press) and sympathetic umpiring win out every time. Perhaps we over obsess about rules.

We had a good turnout, with all six coffee mugs being required for the first time in ages. There was me (as Santa Anna) Chris W & Will as the US imperialists, and Chris K and Phil as my two side kicks. 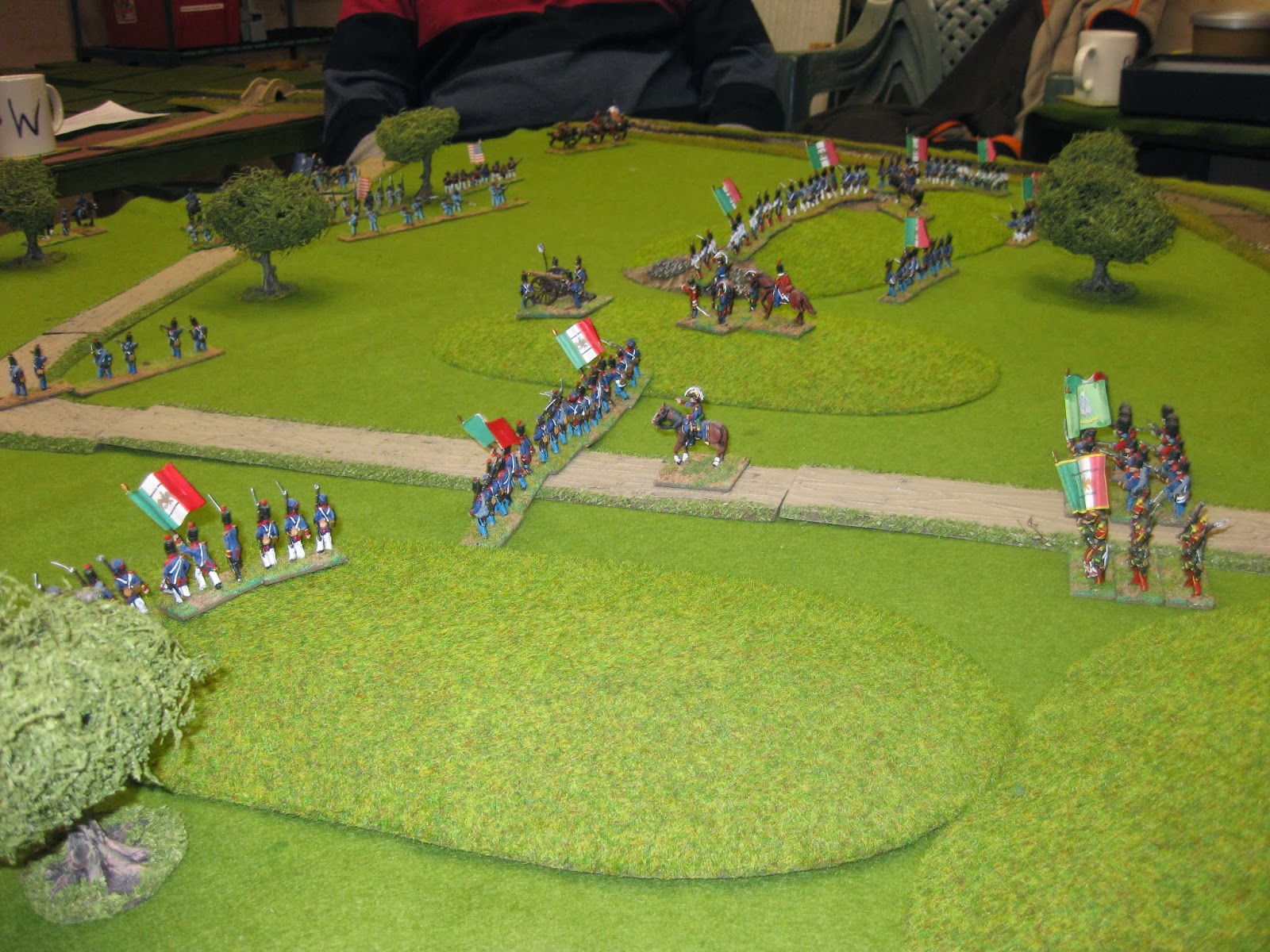 After some manoeuvrings and various shenanigans the Americans captured Vera Cruz and thrust into the interior. There were two routes they could take and I covered one with a small force and deployed most of my strength to the most likely line of attack. Most of it got together at the battle site, but I lost a gun battery that didn't make it. Effectively we were re-fighting the Battle of Sierra Gordo, which historically the Yankees won by finding a secret mountain pass round the position.

This time they were not so lucky and so they were forced to attack a strong position with a defile. I put my regular infantry on the crest to the right, held the cavalry in reserve and blocked the defile with the Guards division. 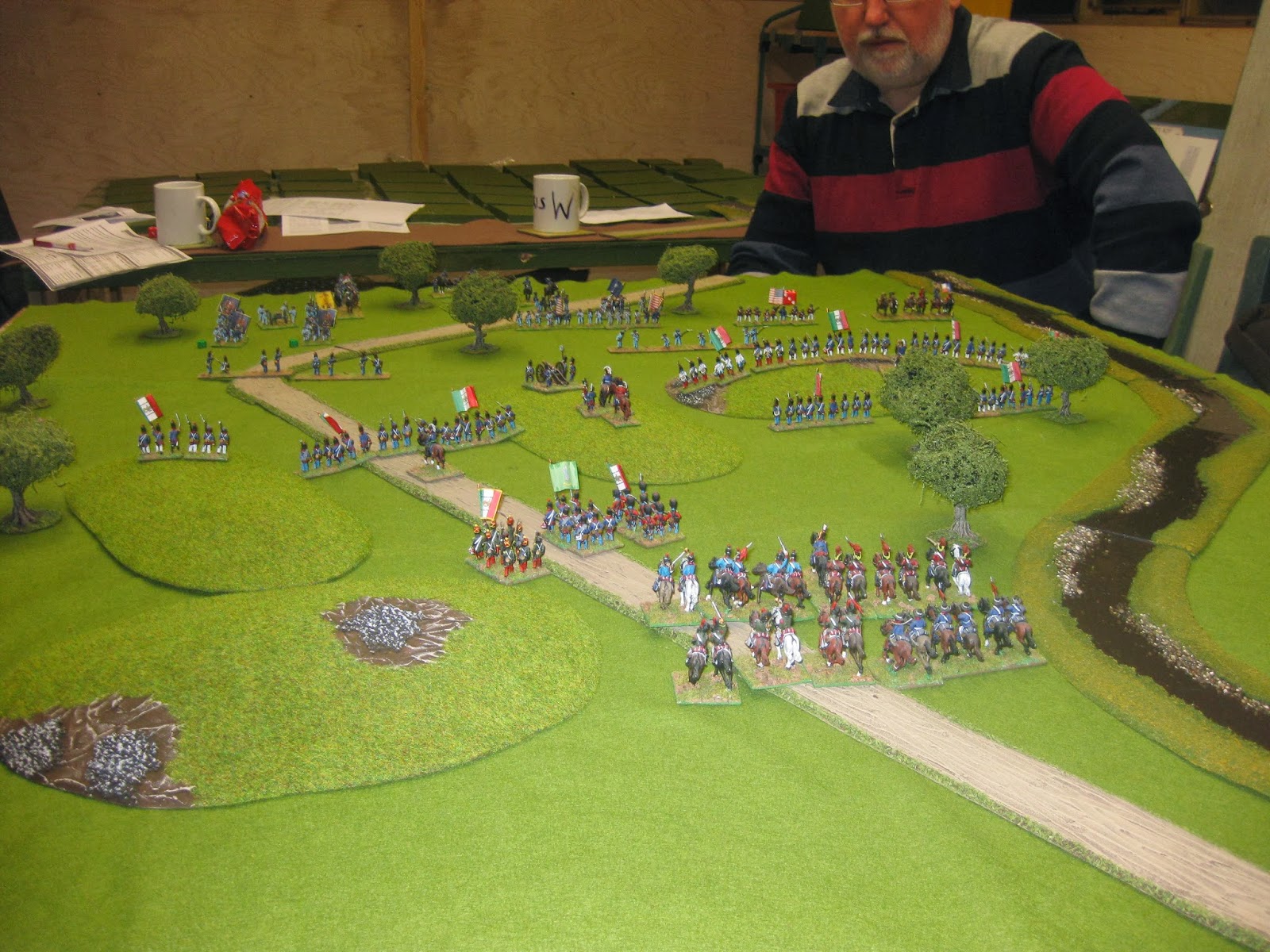 The Yankees suffered from over confidence throughout the entire evening. Below you see them charging my emplaced artillery battery, - an action which inflicted considerable damage on them. In fact the gunners played a blinder all night, consistently rolling high numbers. 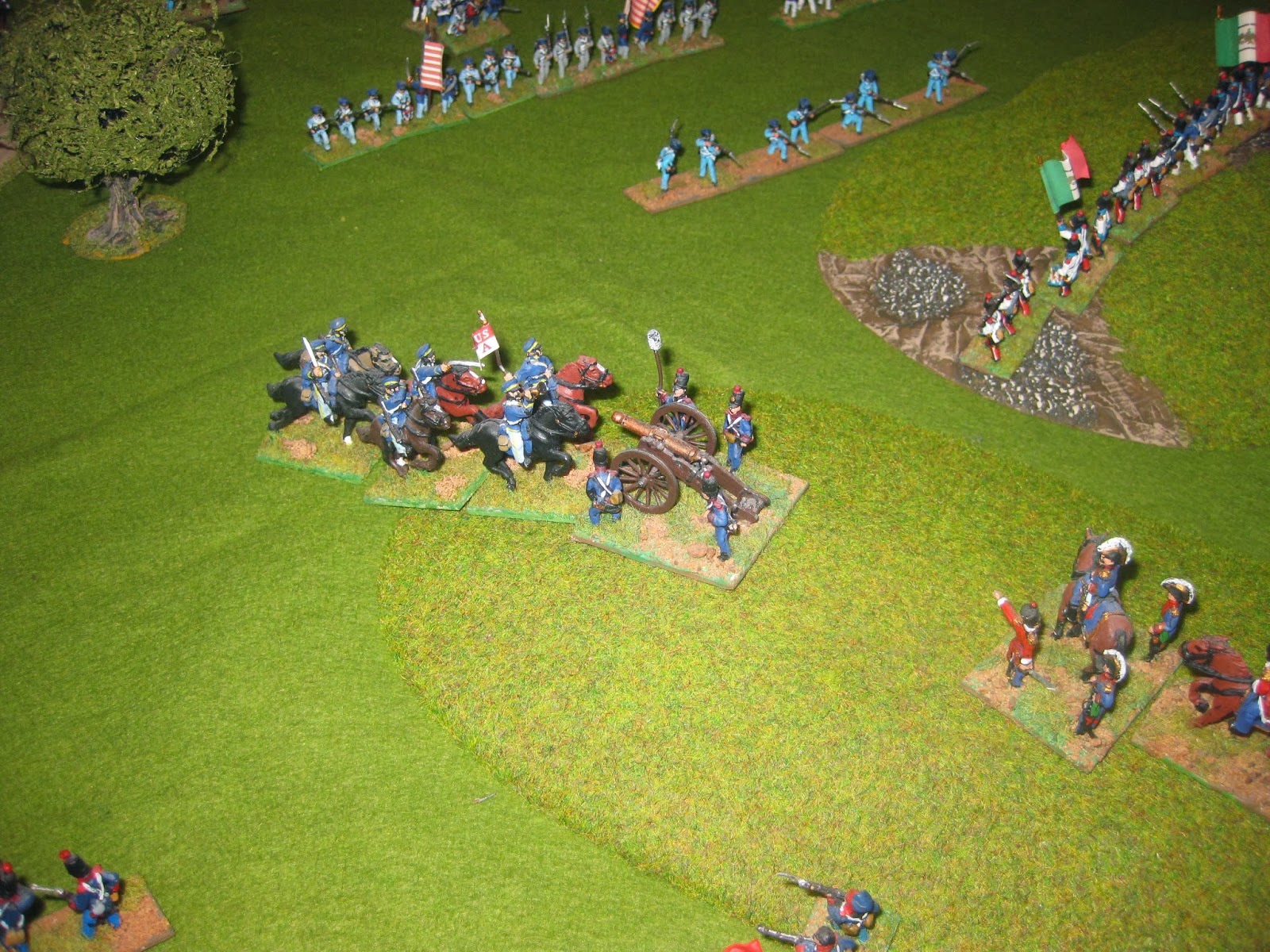 Stunned by the excellence of my deployments the Yankees were reduced to making a general assault all along the line. 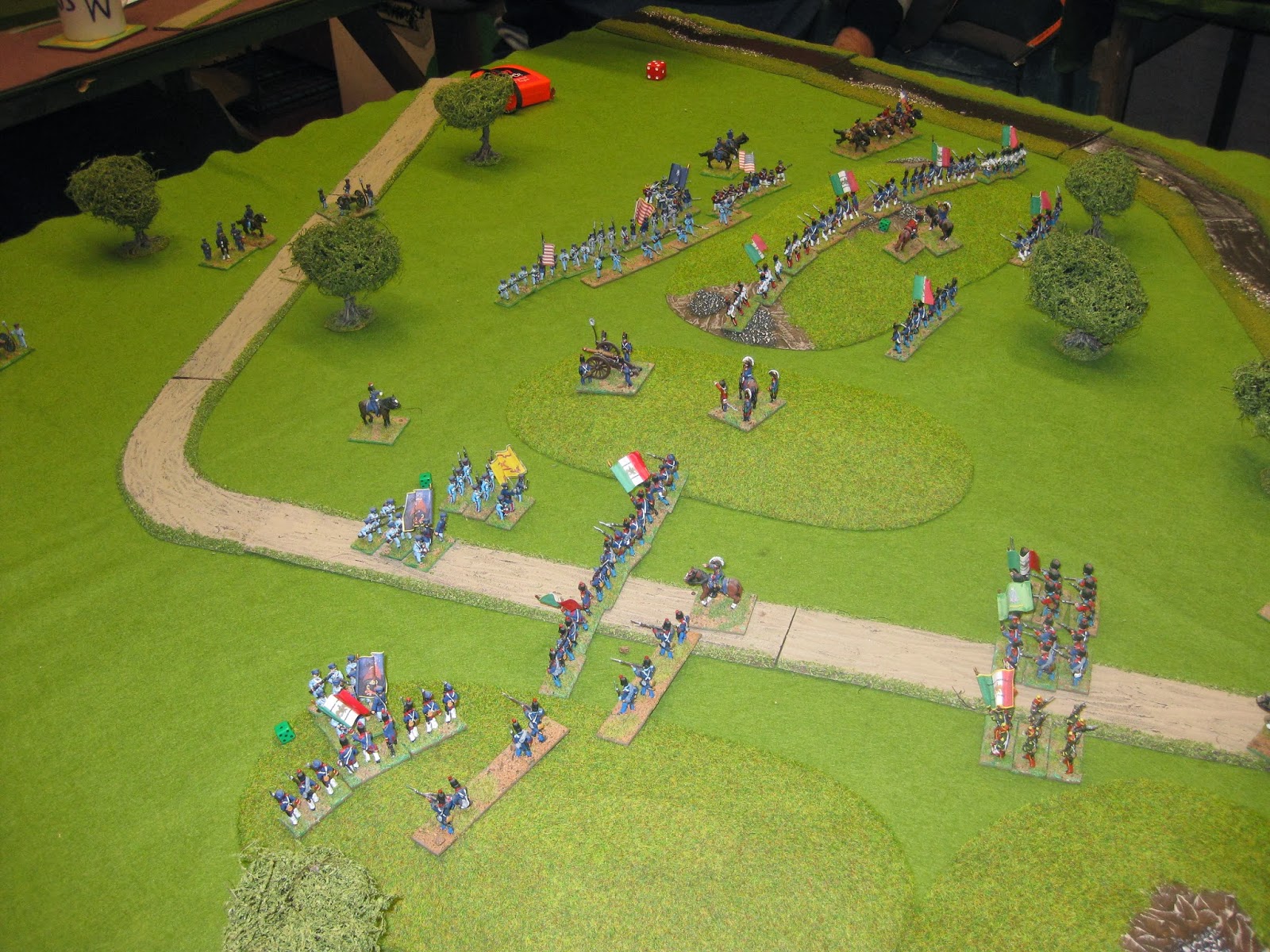 This caused some issues on the right as they out ranged my men slightly with their rifle skirmishers. I made my one mistake here, and conceded to my lieutenant on this flank his request to retire from the crest line. This meant he lost his uphill advantage when the melee finally came. 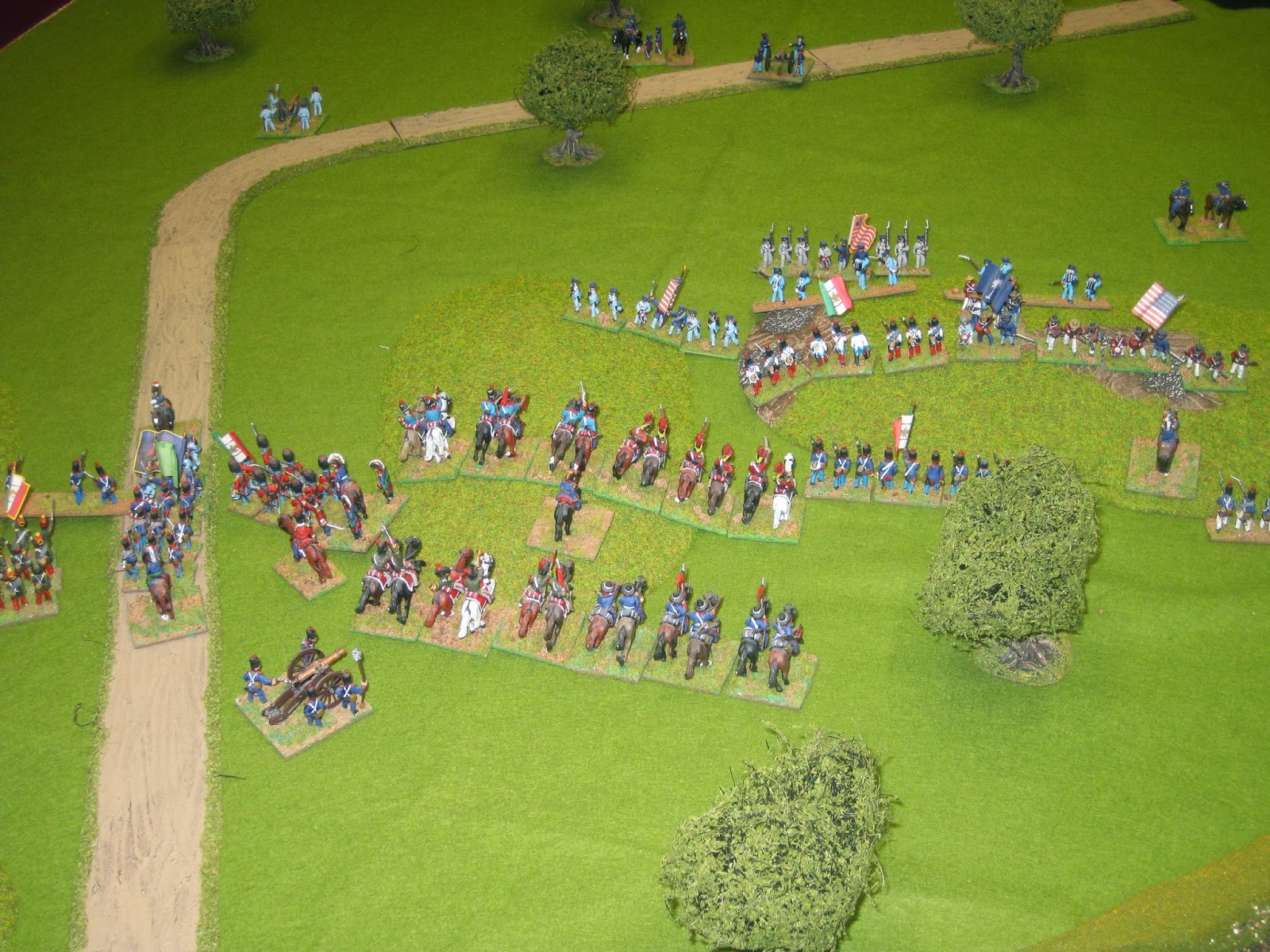 As the Yankees pressed and my line wavered I ordered Phil forward with the cavalry reserve with orders to charge everything in front of him.

This is the sort of order Phil likes and he did me proud. I'm not sure what the total win/loss balance was, but he seriously disrupted the Yankees for the small loss of all of his units. 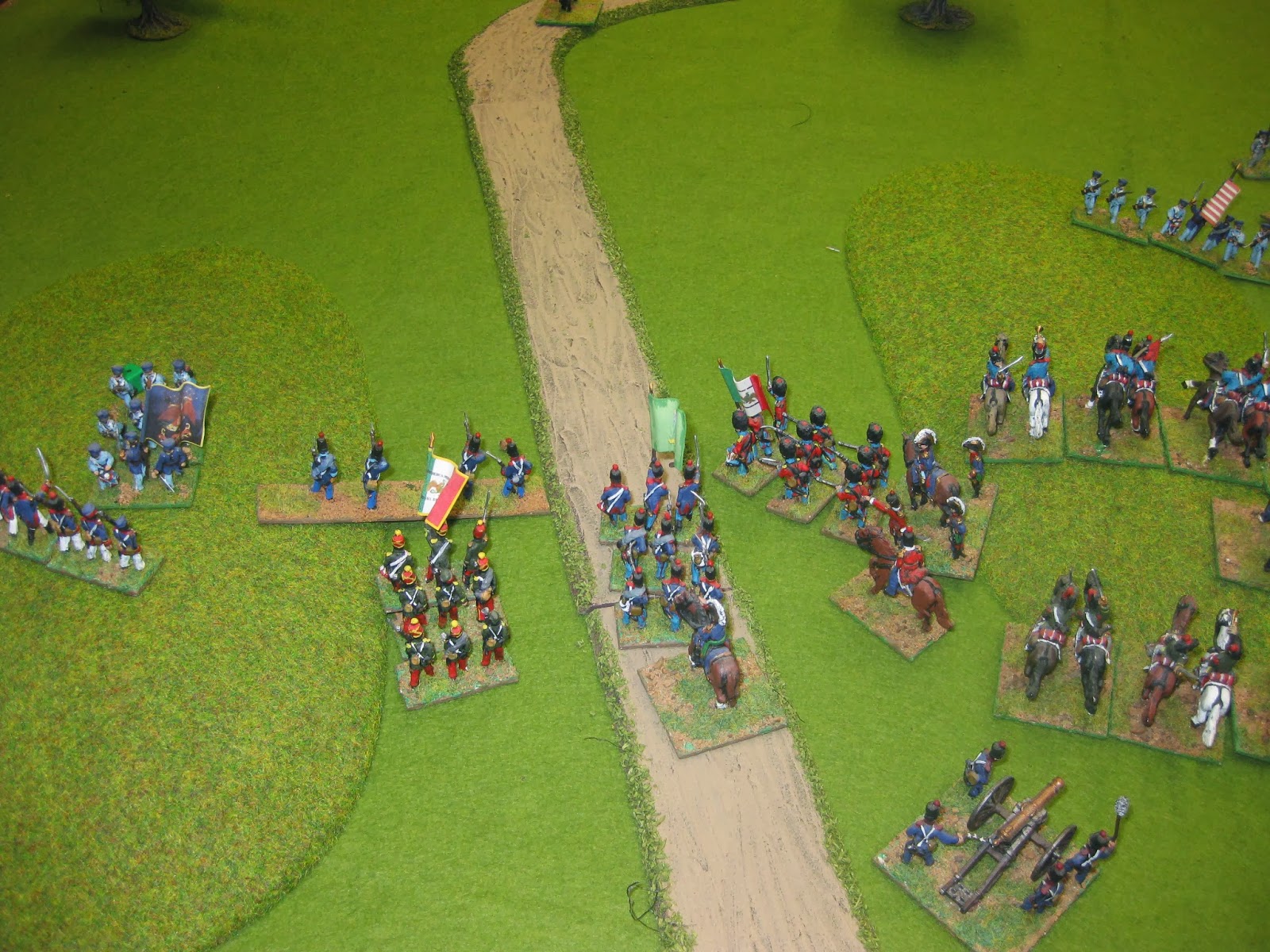 In the defile the Yankees broke my initial line, but my counterattack with massed columns was a stunning success and the right hand Yankee brigade was soon either annihilated or routed, their commander fleeing ignominiously to the rear. 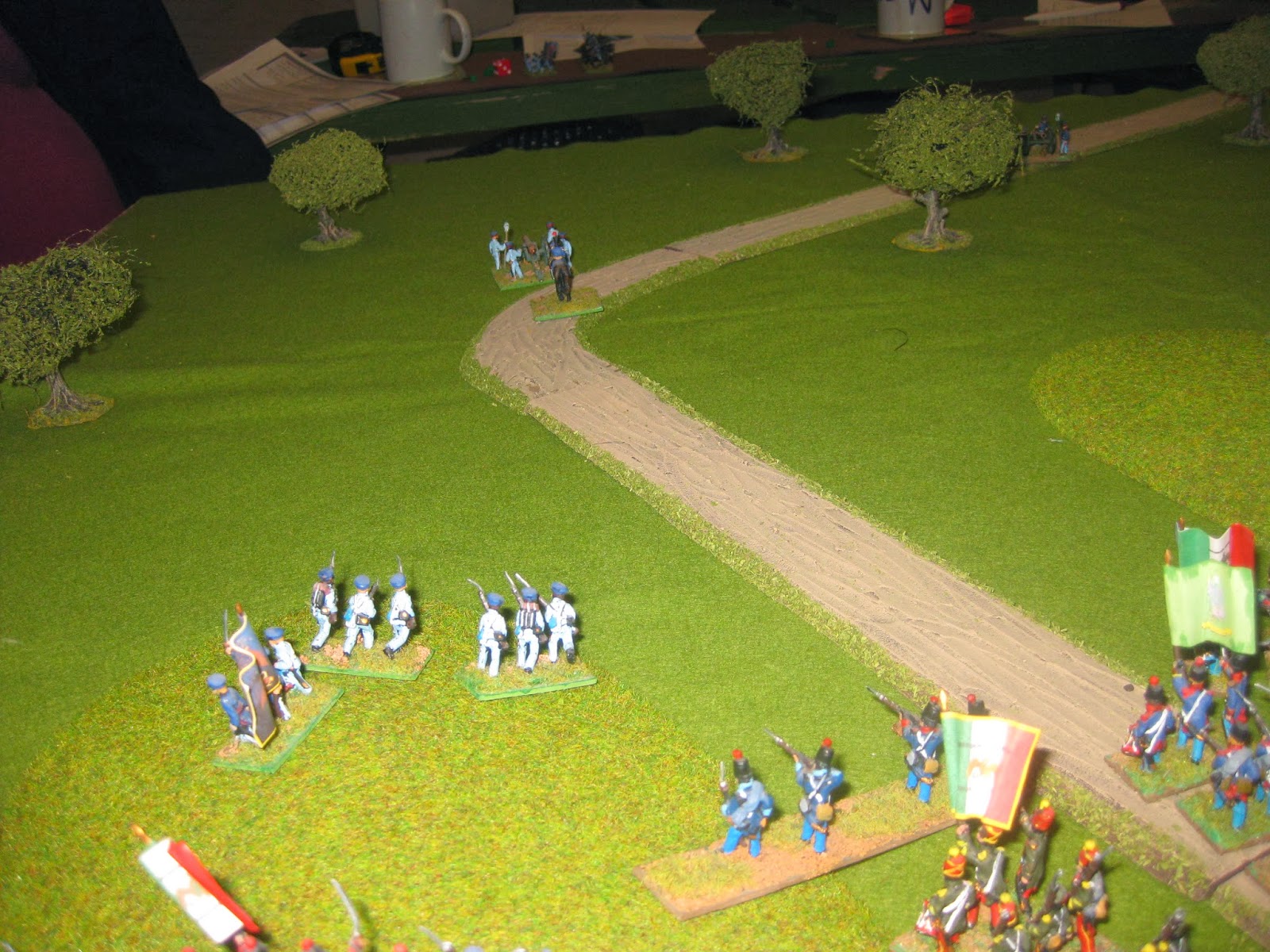 Elsewhere it hotted up even more. The main concern was the Texas Rangers turning my right flank as under Shako they are armed with both blasters and light sabres. 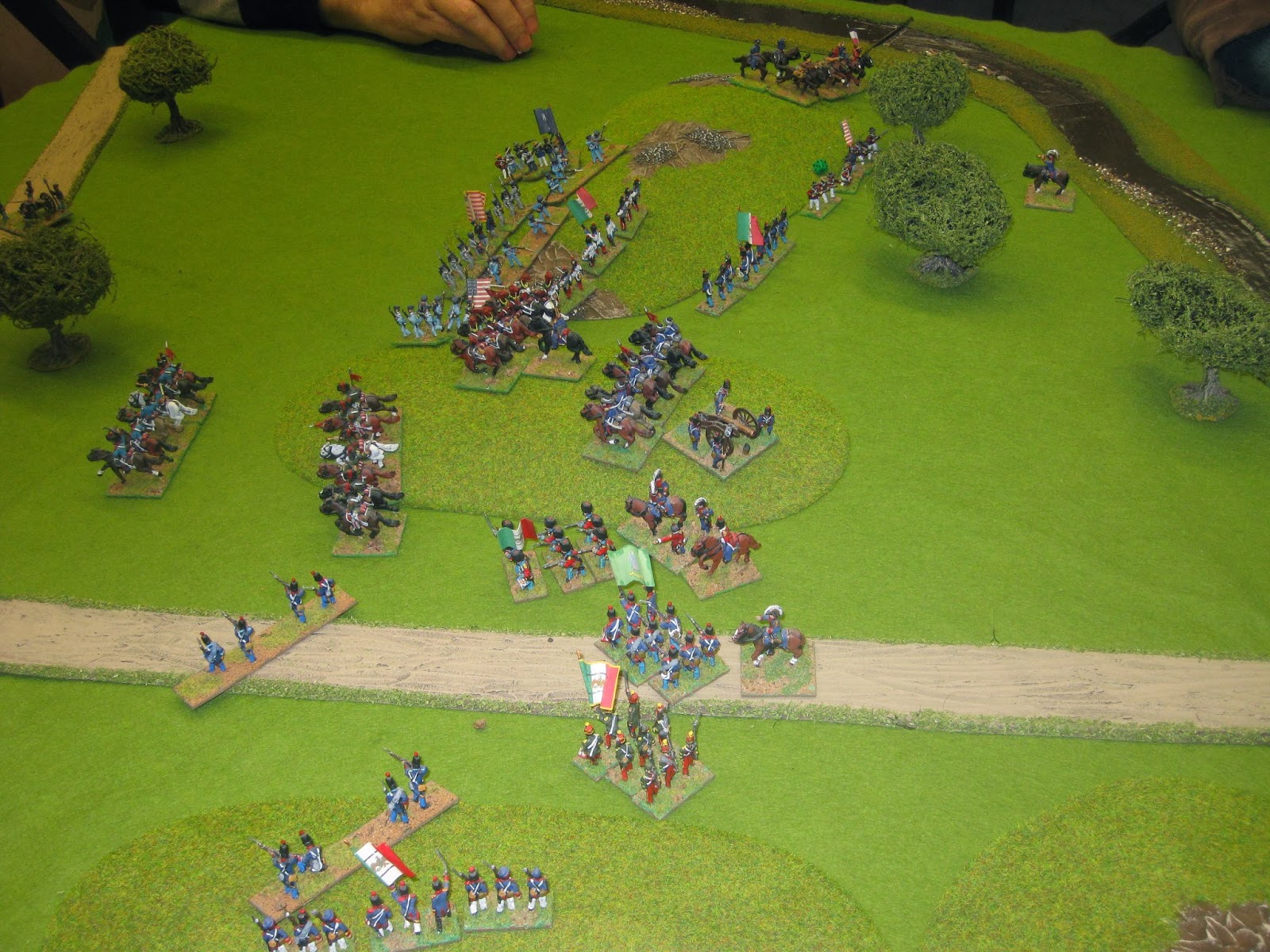 We were able to prepare some reception for them, with a cavalry unit and a gun battery, but having them behind the line which was being pressed from the front was not a pleasant prospect. 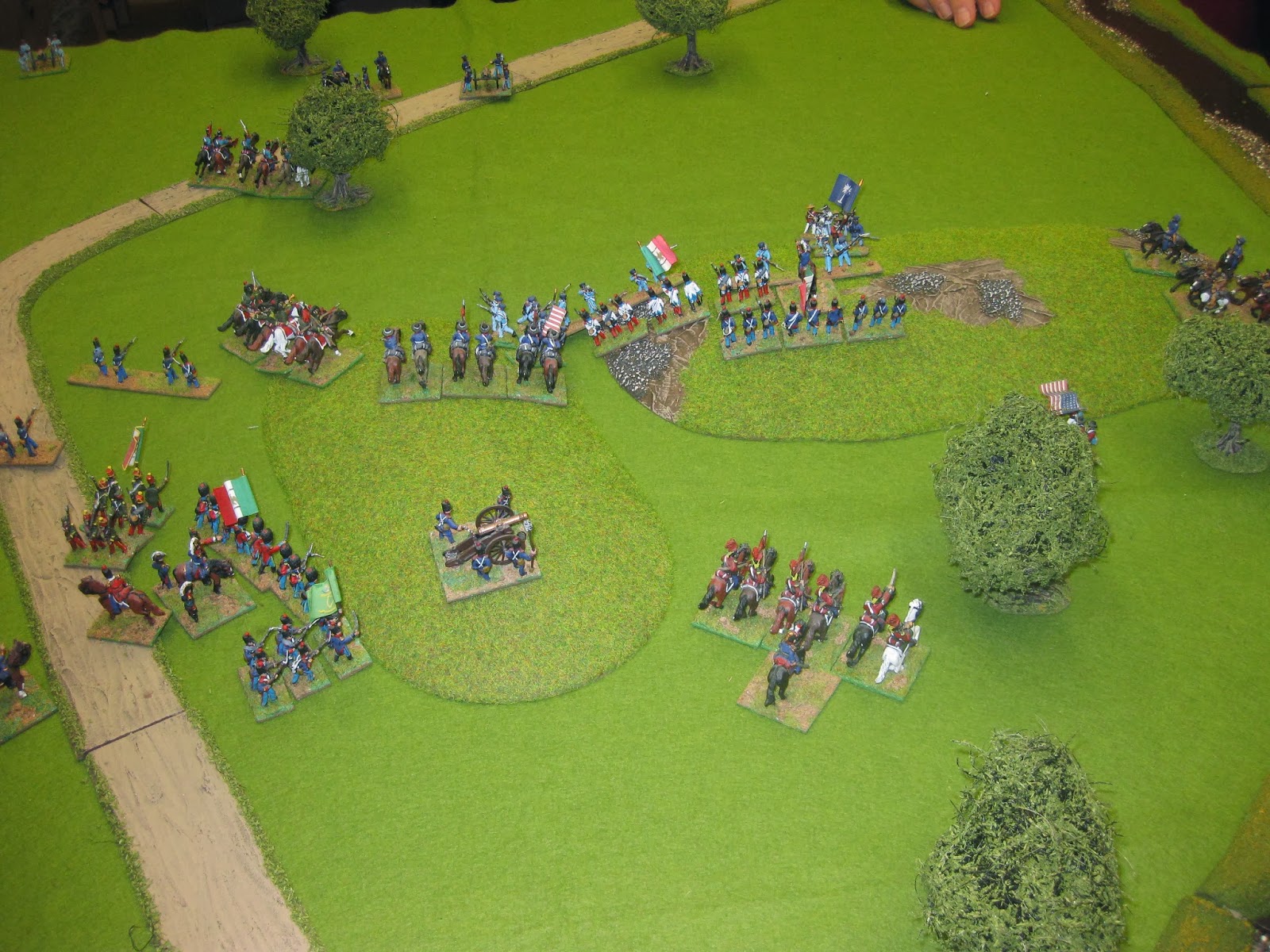 I was able to swing the remaining Guards to the right to shore up flank, but the Yankees just kept coming. 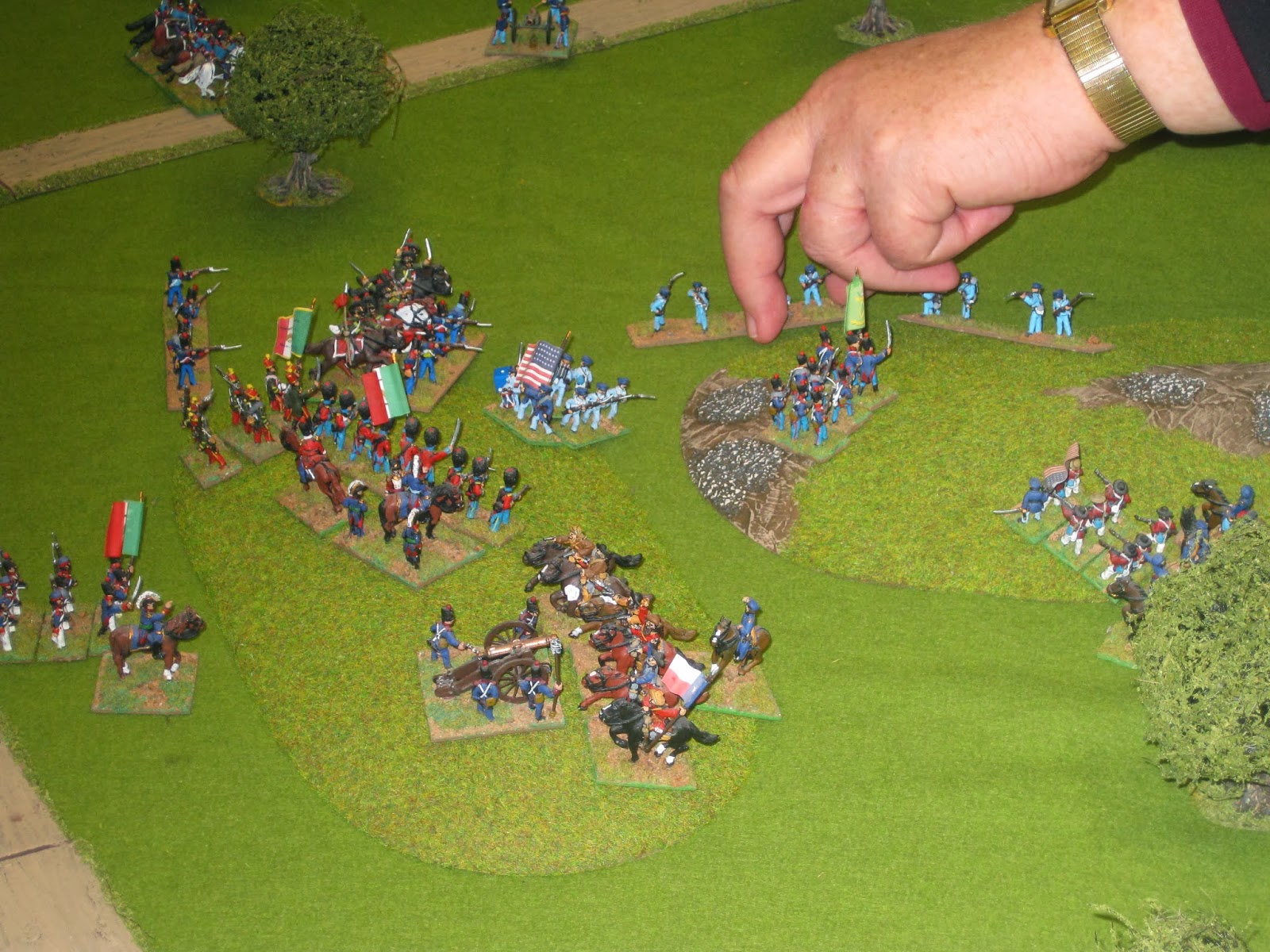 But in the end we prevailed. The Texas Rangers finally took too many hits and were broken, and the rest of the Yankees stumbled back up the road they came down. 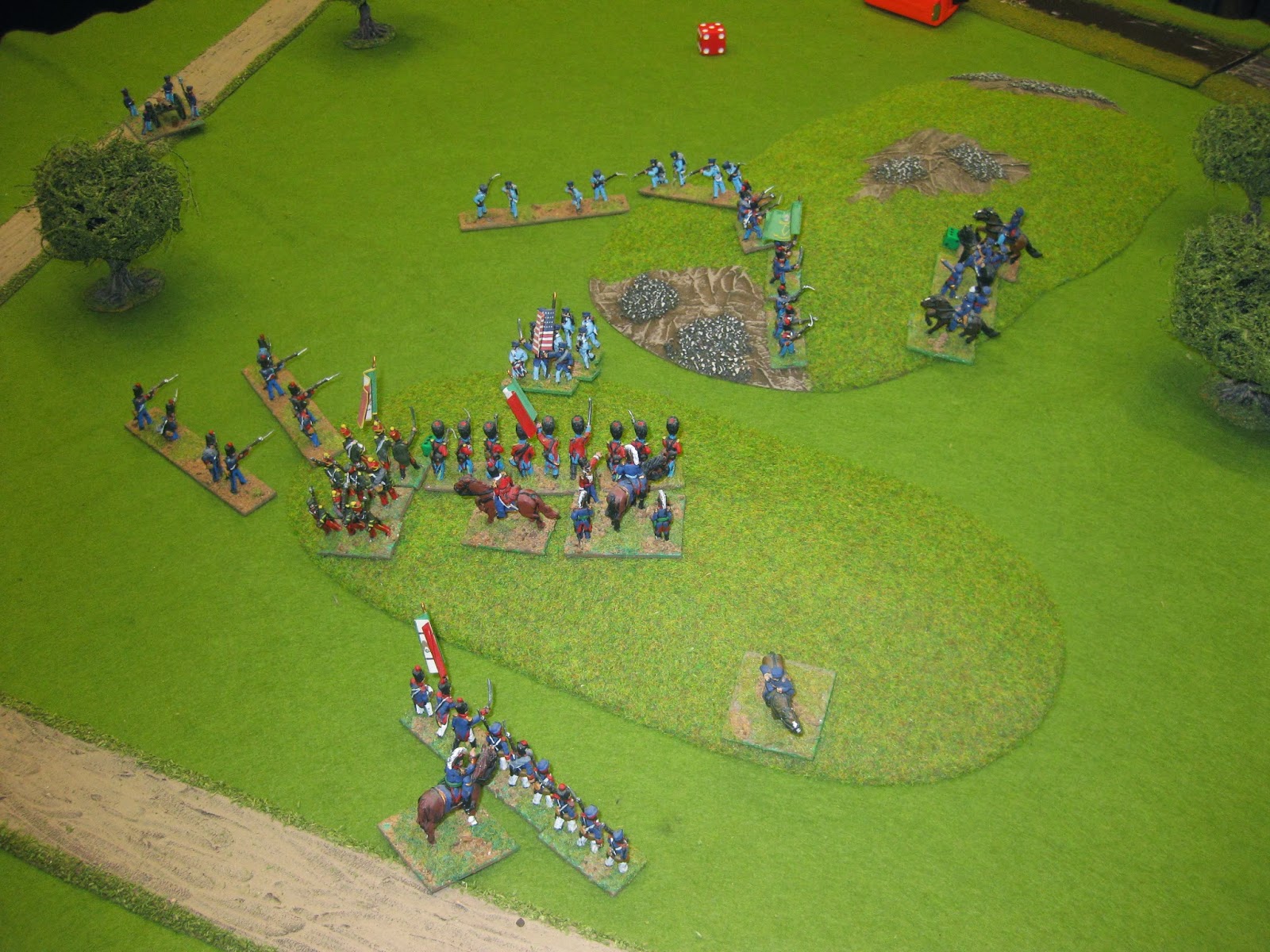 So, a TRIUMPH for the forces of Mexico and that tactical genius Santa Anna.

A vastly enjoyable romp, played in the right spirit by a group of friends. Just what wargaming is all about.
Posted by Trebian at 12:13