Battle of Combover Down

After the last posting's surprise revelations and controversy, it's back to the normal sort of stuff and a battle report.

Due to unusual circumstances the Monday Night Group was forced to meet on Monday this week. For this week's entertainment I dusted off some figures we haven't used for a few years and put on a Wars of the Roses battle, using my "Trial by Battle rules". These are based round a core of AMW, but with quite a bit of chrome added. And some fundamental mechanism additions too. These were last played at CoW 2009. How time flies.

The scenario was based a bit on the Battle of Barnet. That meant the Lancastrians were on a ridge and the Yorkists were going to attack them. The rules are for 15mm figures (mine are from Peter Pig) and were written pre-Shedquarters. Consequently they're intended for a smaller table size. Another chance to show off the flexibility of the Shedquarters' table arrangement. 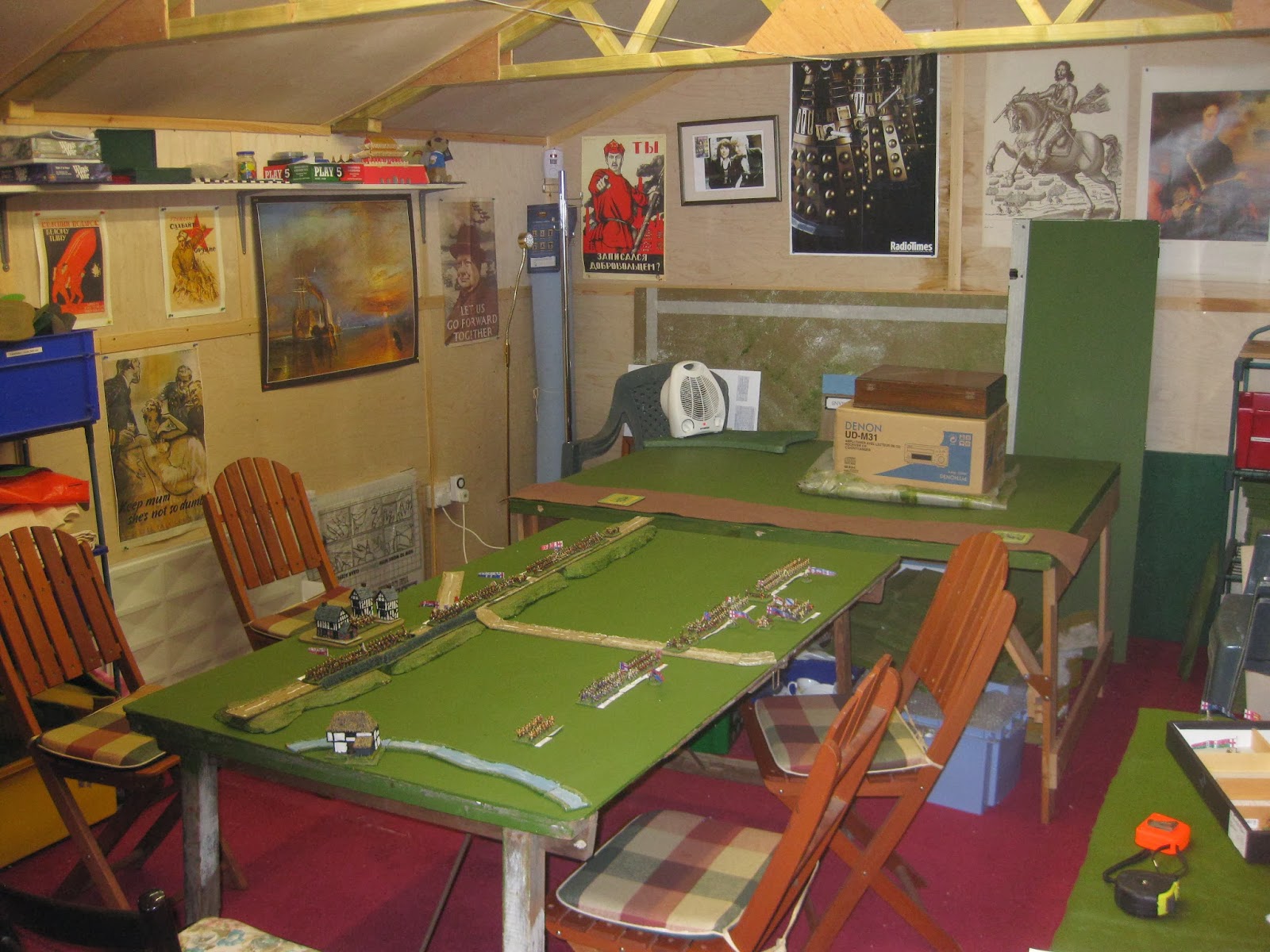 A simple 5' x 3' table, with the other pieces available for holding spare figures. The two extension boards are leant up against the picture of Tom Fairfax on the far wall. The figures are based as DBx elements, mostly 4 figures to a 40mm x 20mm base. The white strip at the back is a sticky label with details of the retinue including unit quality (Noble, Yeoman or Levy) and Armour type (full harness, harness, jacketed, unprotected).

The Lancastrian role was fairly passive, - mostly waiting to be attacked - as I wasn't sure how many players I'd get and thought I might end up laying them. As it was there were three of us including new bug Chris W, with Phil turning up later to make four.

Will took the Yorkists and initiated a straight forward attack all along the line. 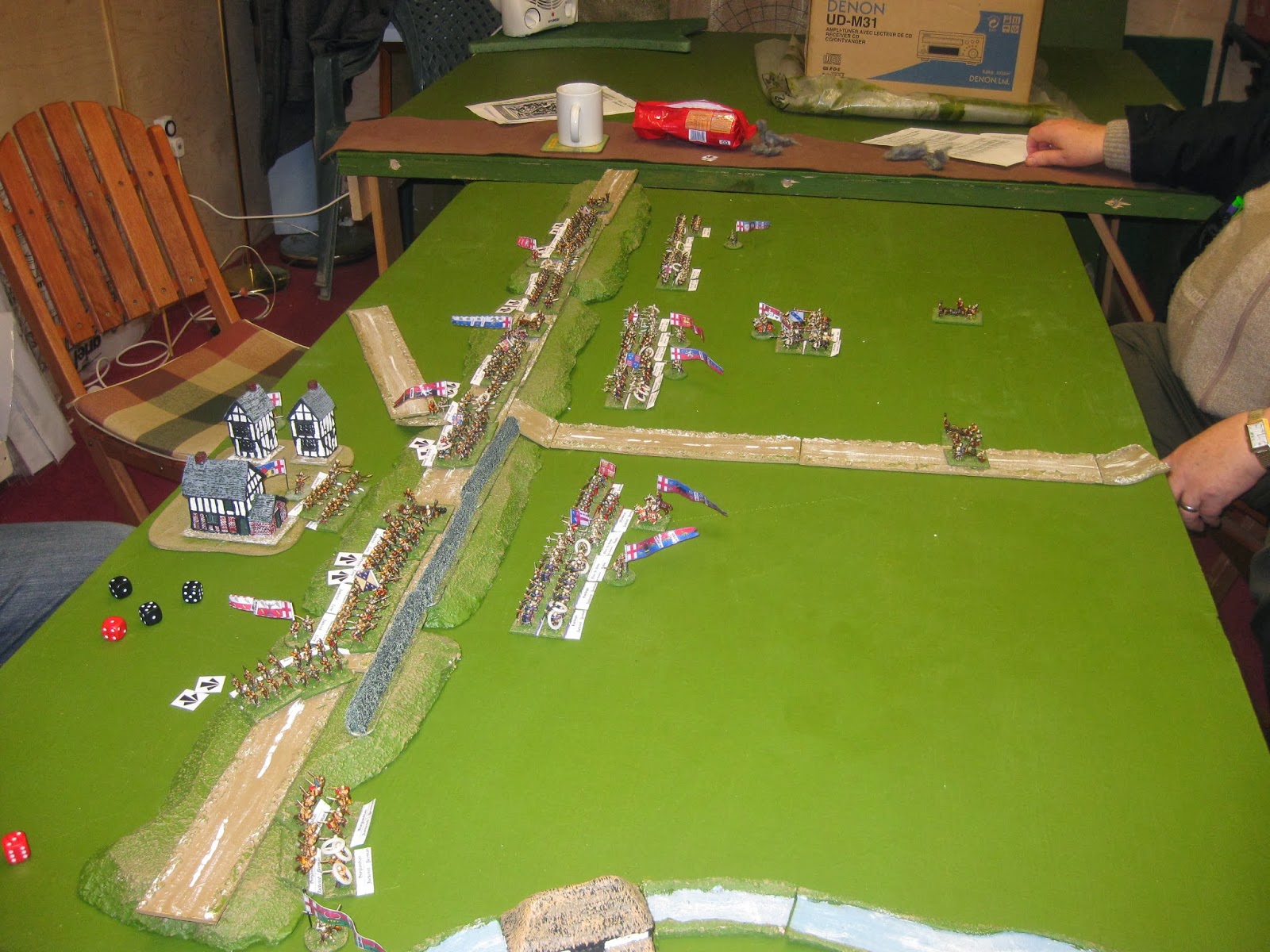 Will had a reserve of cavalry just behind his line. Chris had a reserve of billmen in the village. Will also had a floating unit of Burgundian handgunners who were trying to flank the position on Chris' right.

The way the game normally works (and is designed to do so) is that the two battle lines move into bow range and shoot at one another until one side runs out of ammunition. They then close the ground as soon as possible. Will eschewed these measly types of tactics and decided that the curved bit of wood held by half of his army was for hitting people over the head and just charged straight across the board.

In the picture above the arrow heads are ammunition expenditure markers. You get one each time you shoot and have to roll more than the number in order to be able to shoot next turn. Leaders can then go and try to get the units re-supplied by a similar mechanism.

I had a fairly poor evening with the camera, so the game isn't that well documented. Chris, as befits a newcomer to the group, threw poor dice when it really counted, failing saving rolls and discovering that several of his leaders didn't have the right stuff. A few turns in and one of them had already slipped off to the rear as it looks too dangerous for him. Off to protect his family estate, probably shouting "All is lost" all the way home. 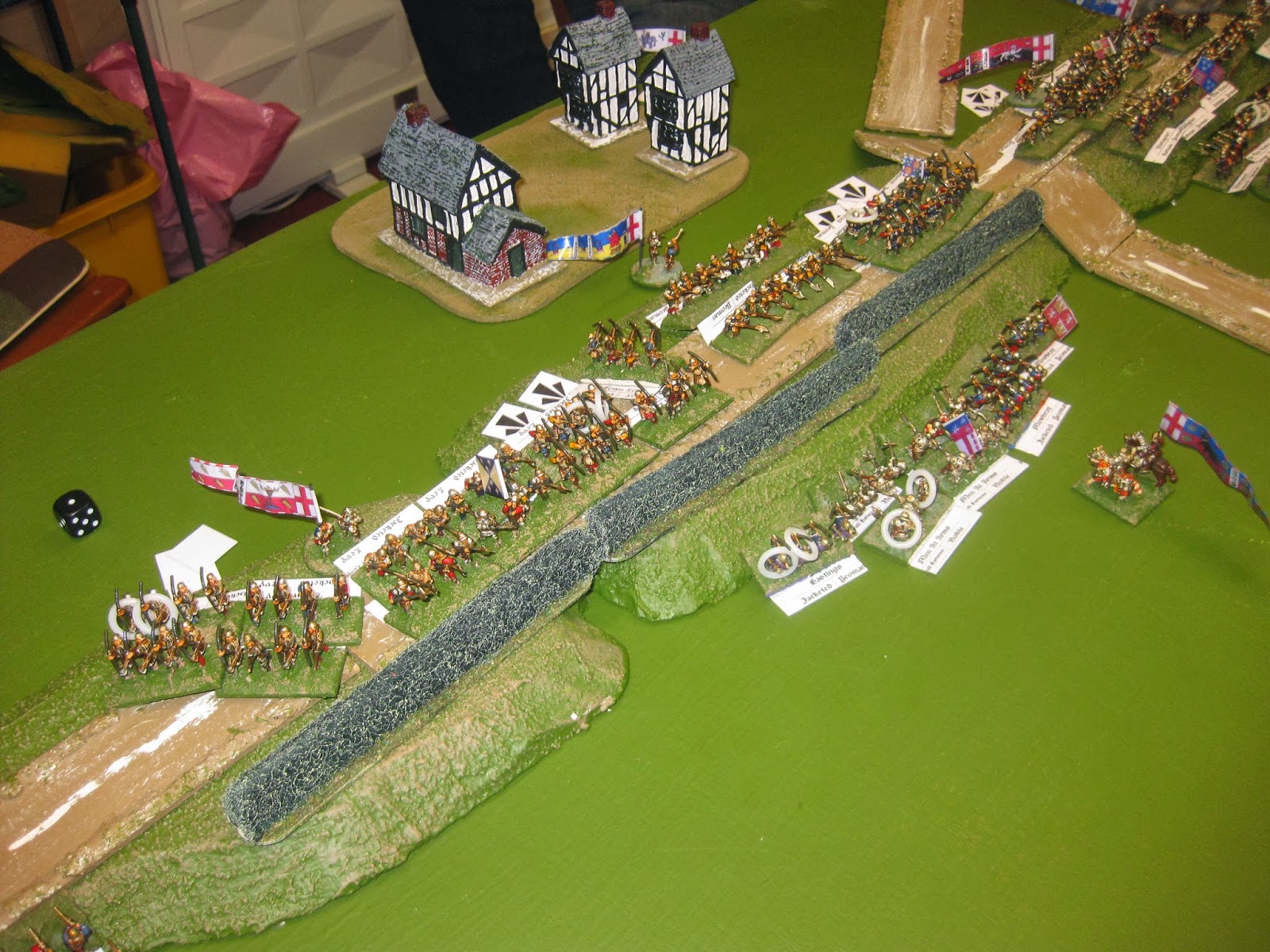 Will succeeded in giving Chris a fright on his right flank as his extreme right wing archery unit went out of supply (signified by the markers being face down) whilst engaged in a firefight with the Burgundians. Will's men struggled forwards, undaunted by the arrow storm falling on them, so Chris pushed forward his reserve to plug the hole in his line.

Eventually Will got up the slope and got to grips with Chris' men. The other flank was a turn behind, but soon everyone was at it, hammer and tongs, and Will's men-at arms were starting to prevail. 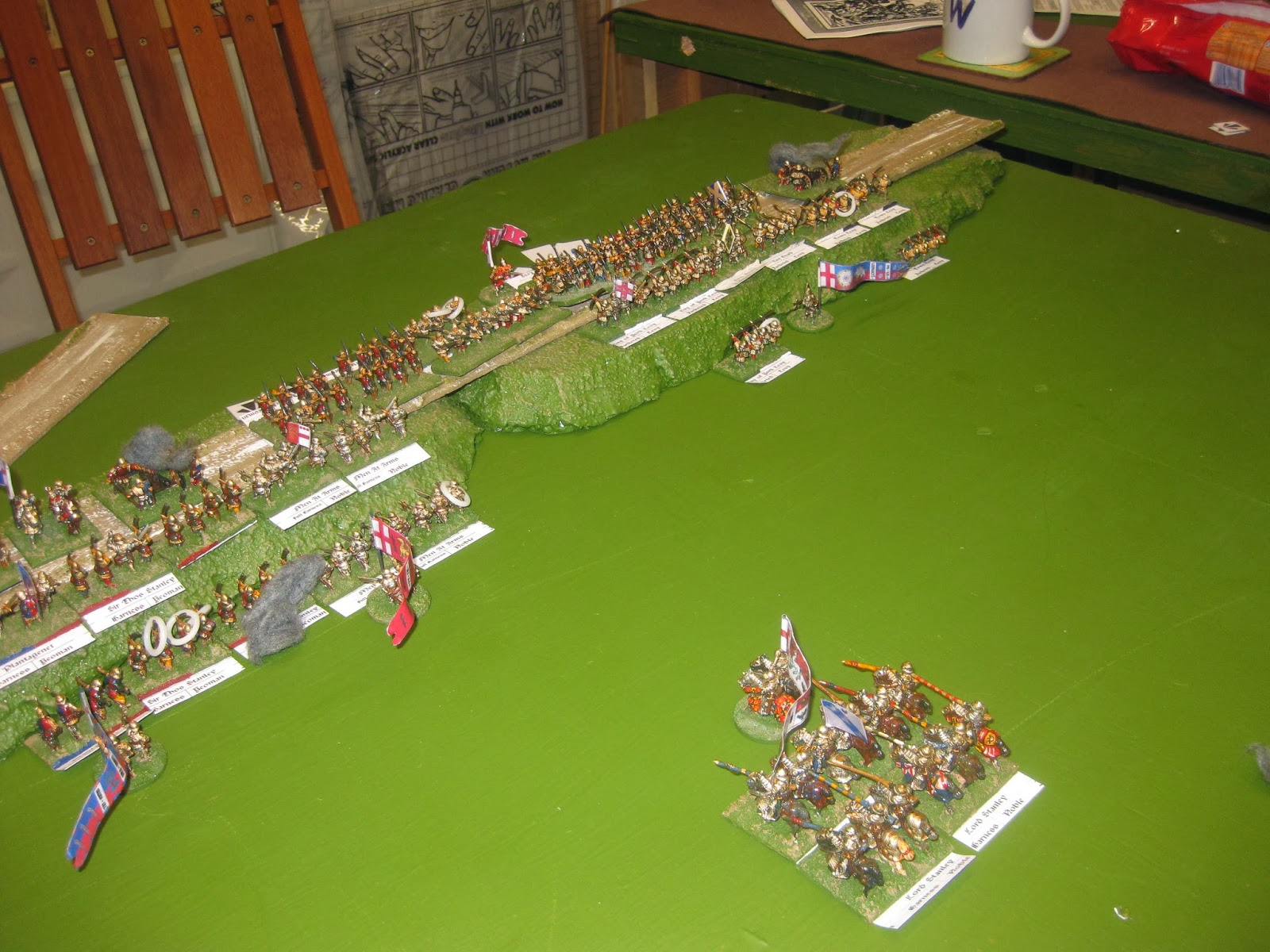 Elsewhere there was much skull-duggery going on, with leaders being stabbed in the back by  treacherous retainers, and dying needlessly pulling their childhood friends out of danger. It really was a jolly romp worthy of a Shakespear history play. 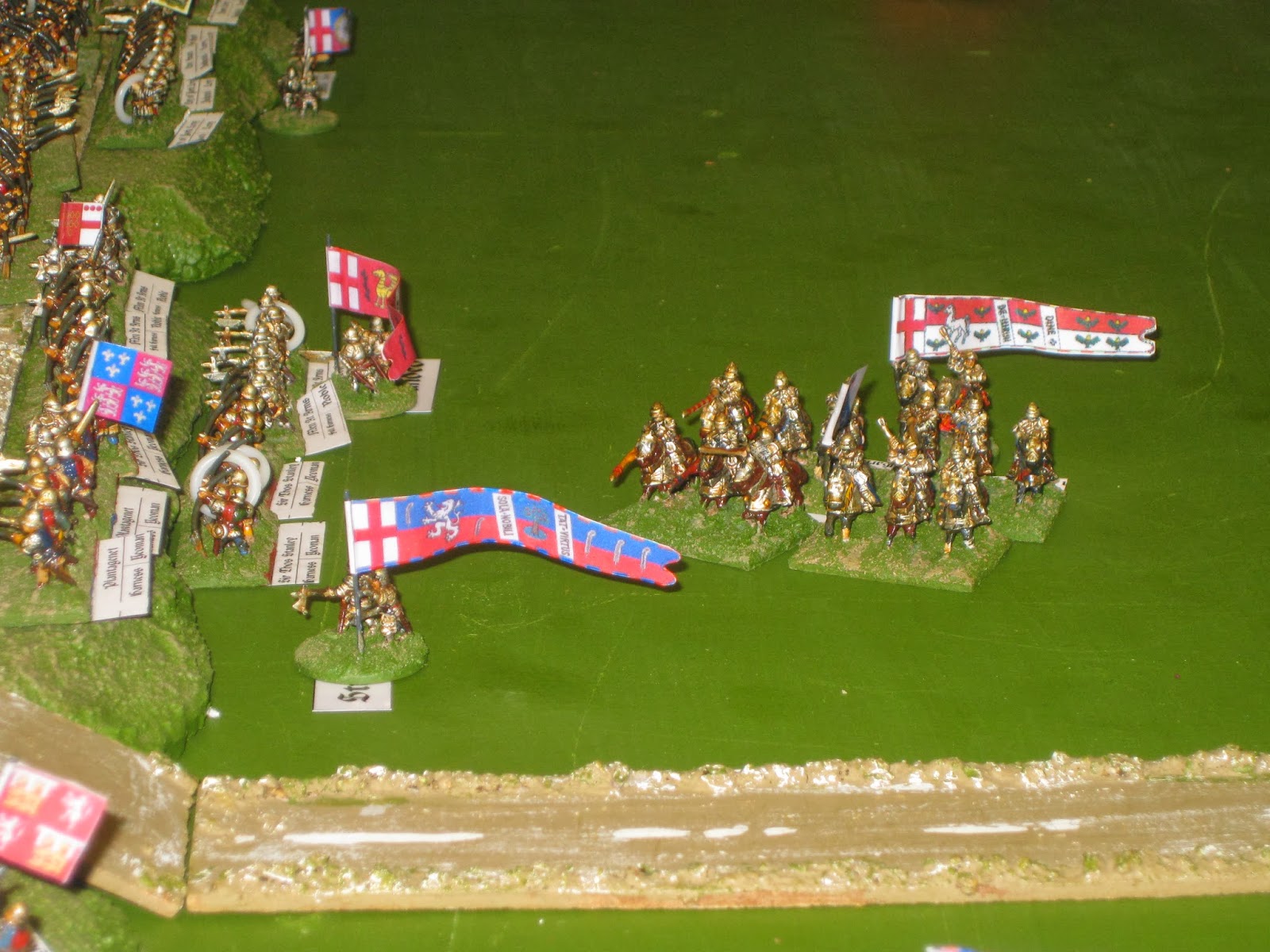 Sensing the battle was reaching its critical point, Will sent his reserve pell-mell towards the road way, and a potential gap in Chris' line. 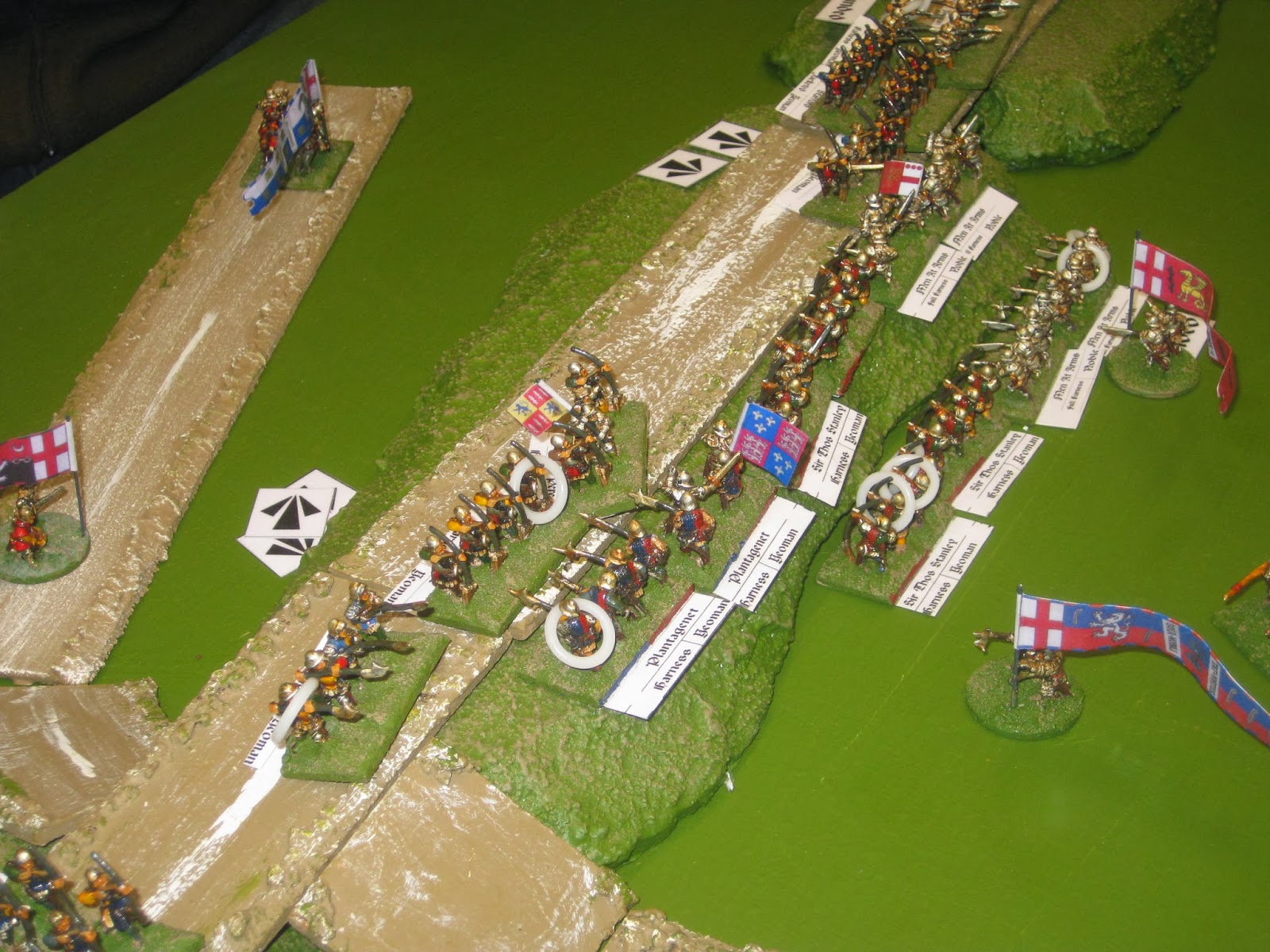 In the end they were never required. Chris' levy collapsed in the face of Will's heavy weight up hill assault, and he conceded the game. A clear victory for the Yorkists, but at a heavy, heavy, cost.

Part way through the final phases Phil arrived, took some pictures and shared in the post game de-brief. Although the rules have been in cold storage for nearly five years we were soon back in the swing of things, and although there's a lot of dice rolling, they play pretty well with a good period feel. The only annoyance is that I put the leadership incidents on a deck of cards which I now can't find* so I had to resort to rolling them off a table.

Phil had spent the day painting flats which used to belong to Deryck Guyler and Tony Bath. He brought them along to show us his progress, so I took a picture. 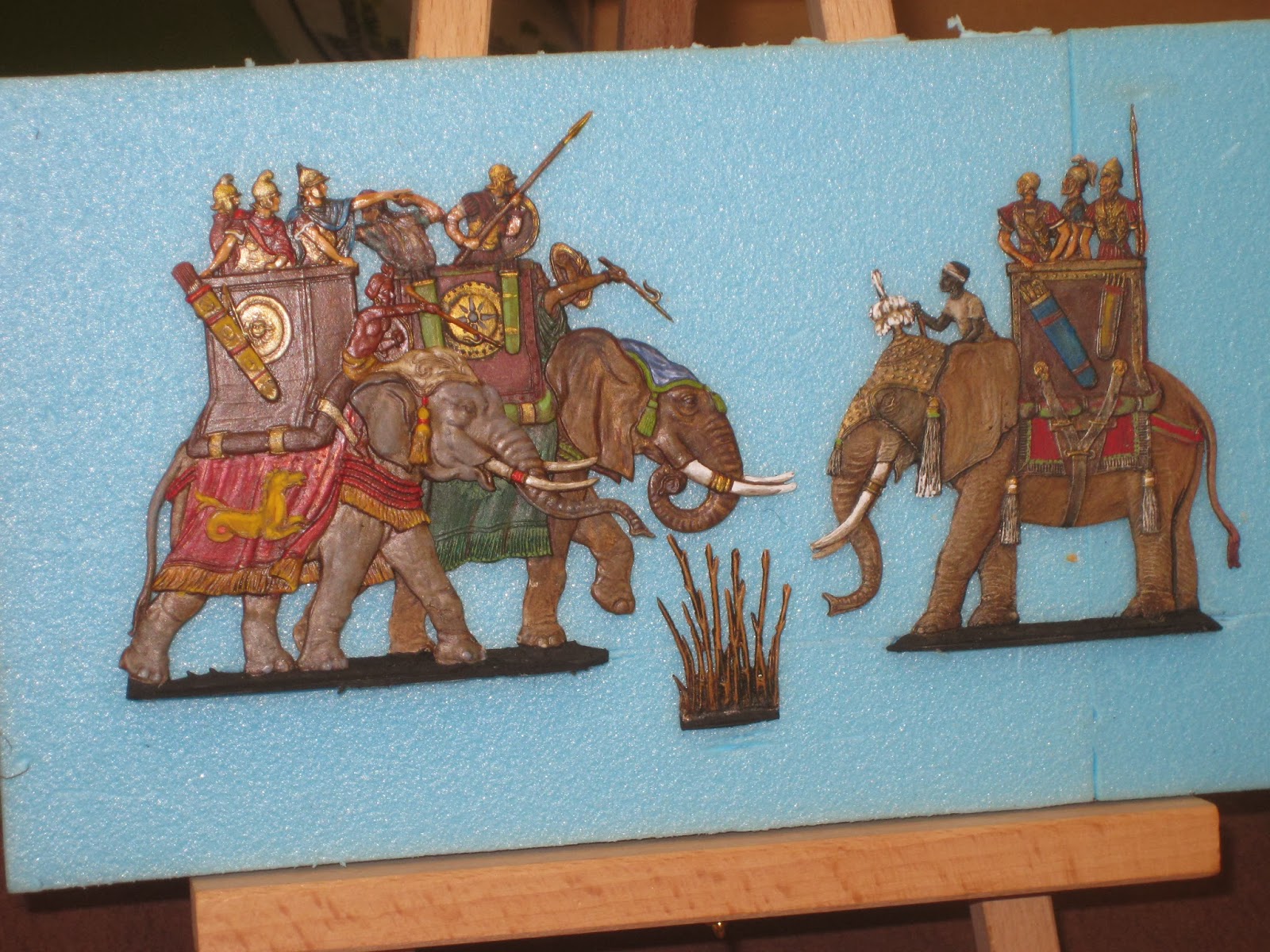 He had some others on a diorama base, but I didn't get any pictures of them. They really are very nice. I can see why the wargaming pioneers loved them.

* Actually, the second I typed that I remembered where they were. Typical.

Email ThisBlogThis!Share to TwitterShare to FacebookShare to Pinterest
Labels: AMW, wargaming, wargaming in sheds, Wars of the Roses, WotR