So we did another game in Will's ACW project. This one was Greenbrier River (I think) which took place in 1861. It was a fairly bloodless encounter, historically, a situation unlikely to persist once the Monday Night Group got their hands on it. 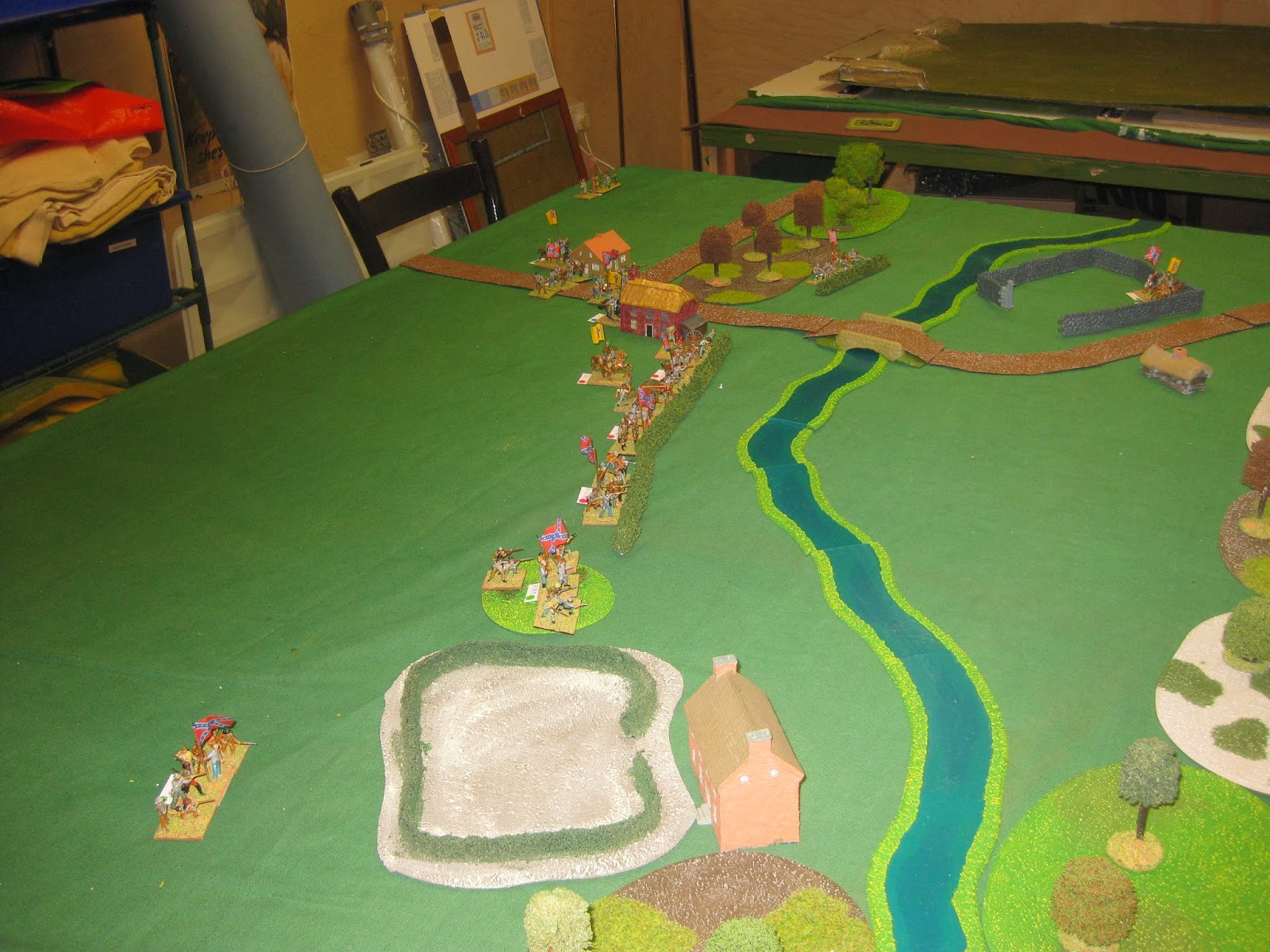 The scenario is that Johnny Reb is defending the river line (woods are impassable, BTW), and Billy Yank is coming up the road in the top right hand corner, early in the morning. This apparently was a surprise to the Confederates. 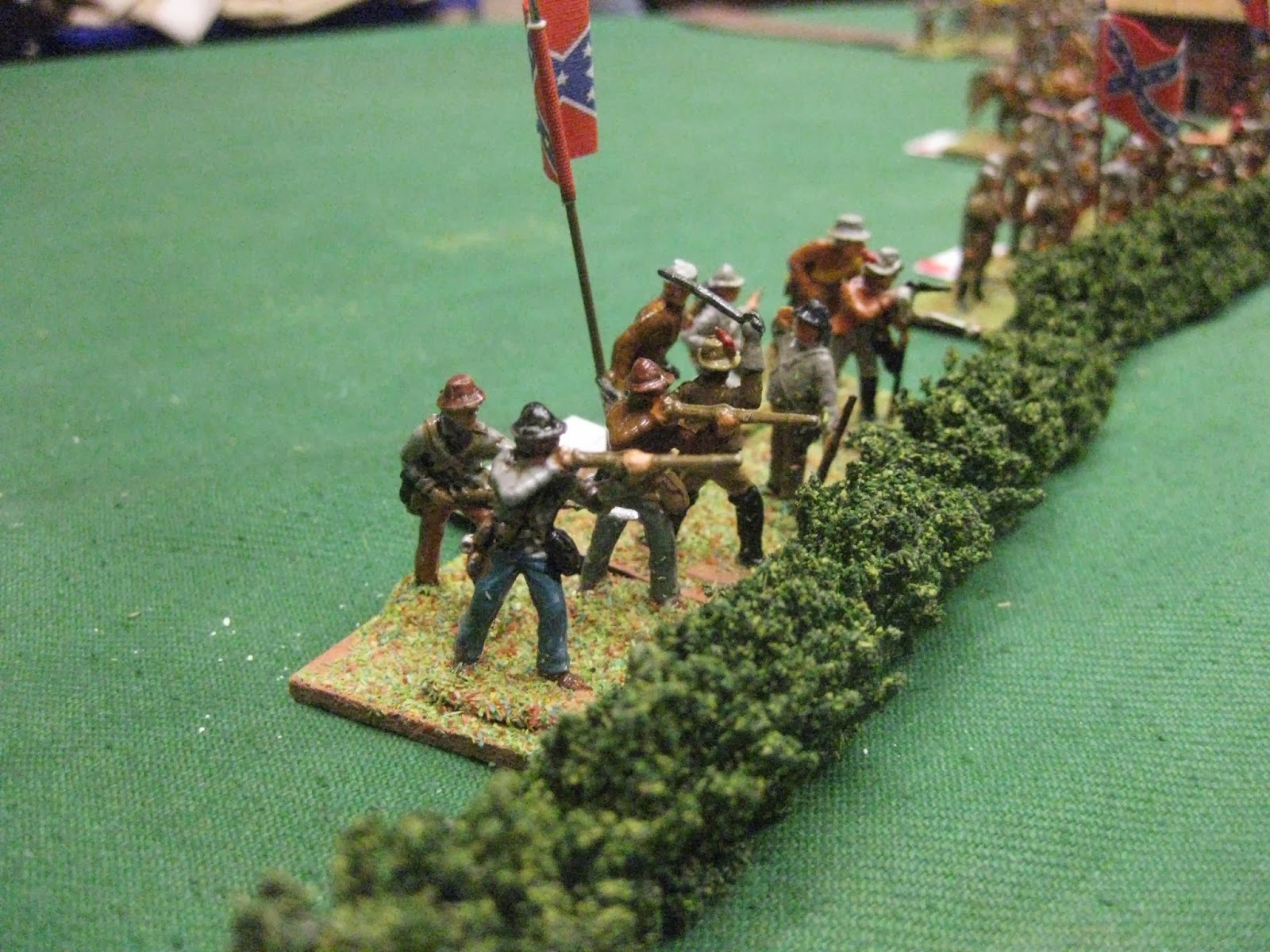 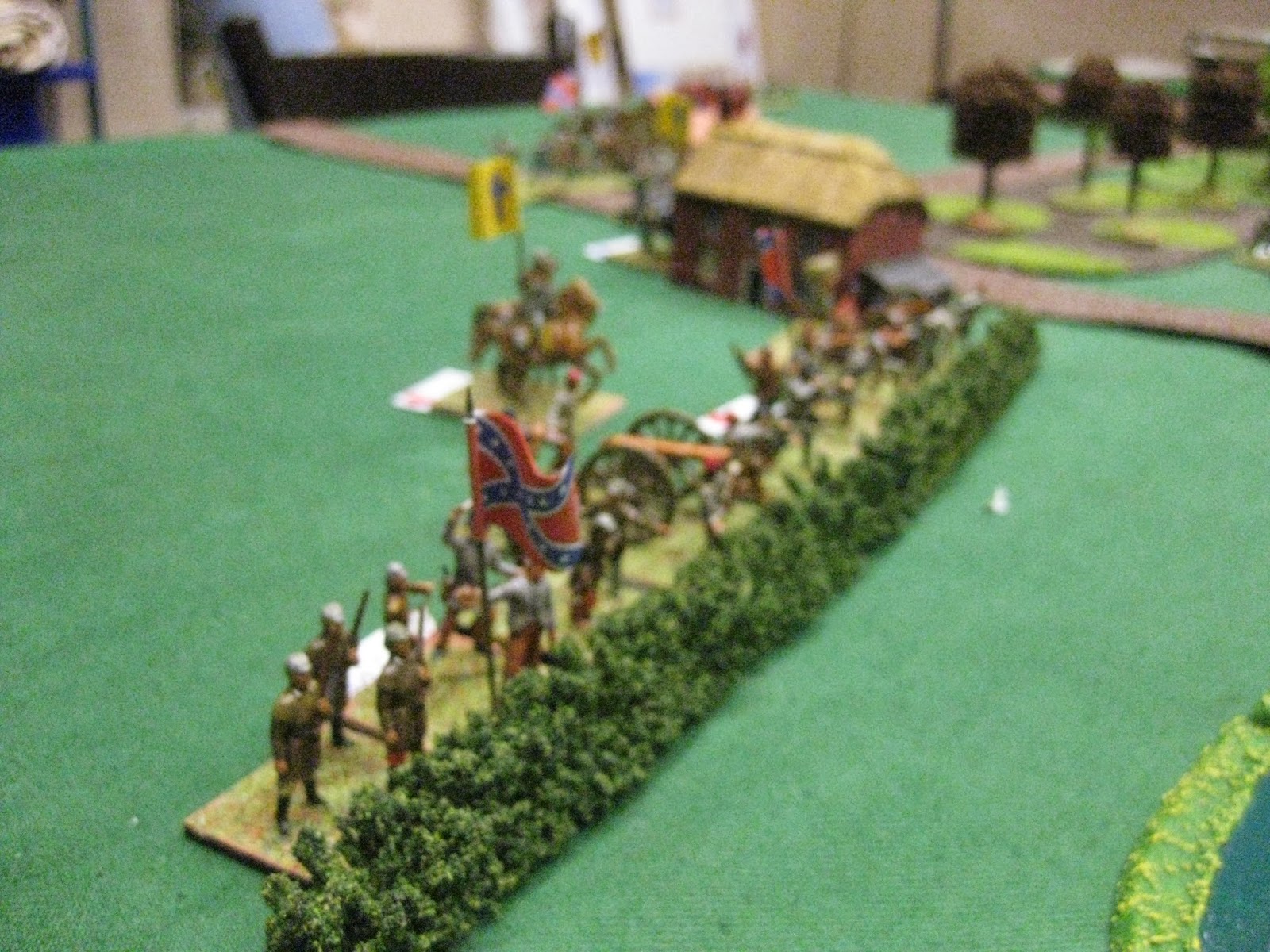 Yes, all the Rebs seems to be lining hedges or fortifications. A nasty looking prospect. 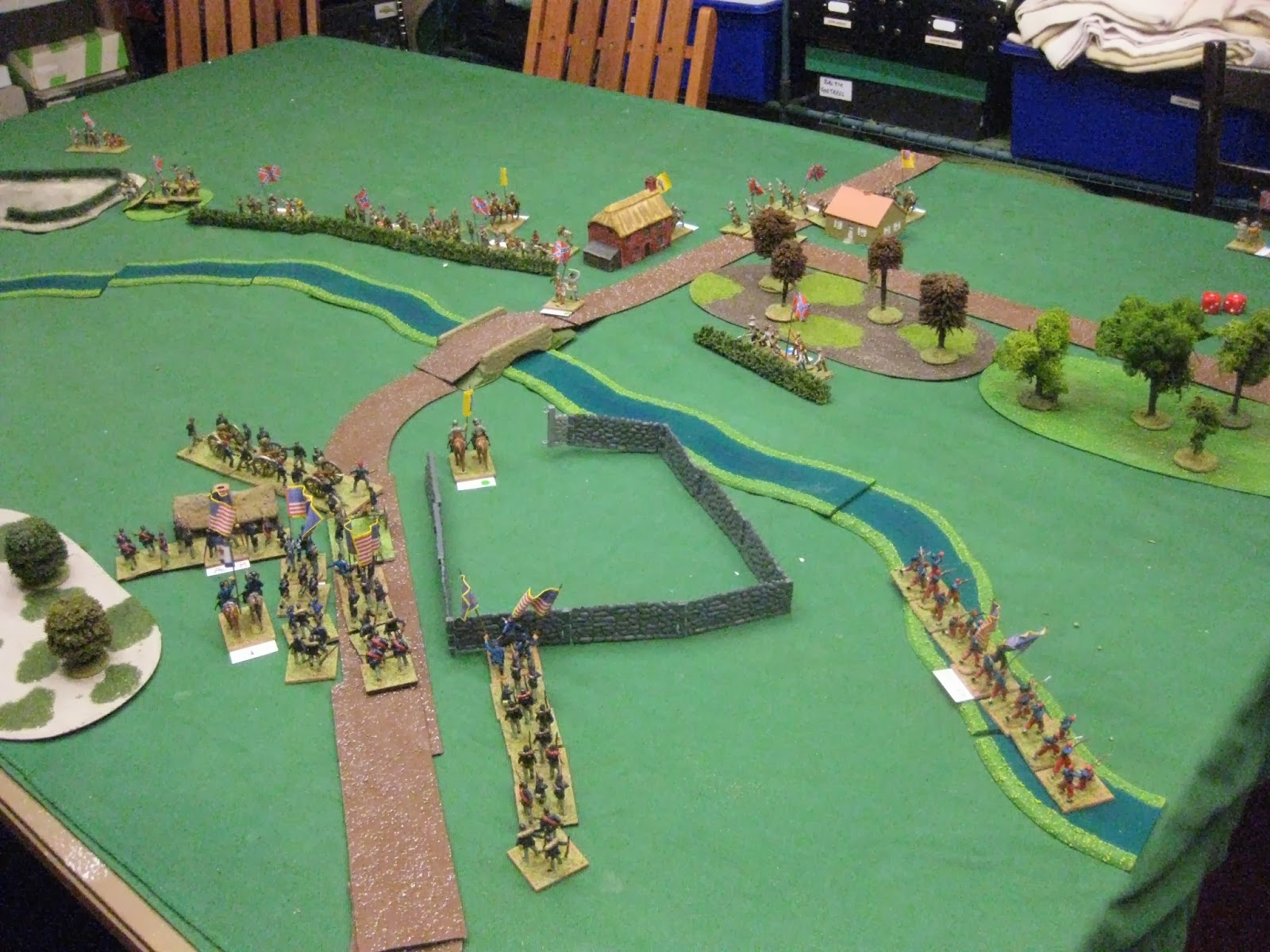 Richard and I took the Yankees, and Will ran the Rebs until more players arrived. On reflection I think this was a mistake, as it would have been easier to feed players in as it went along, rather than Will having to play and umpire. 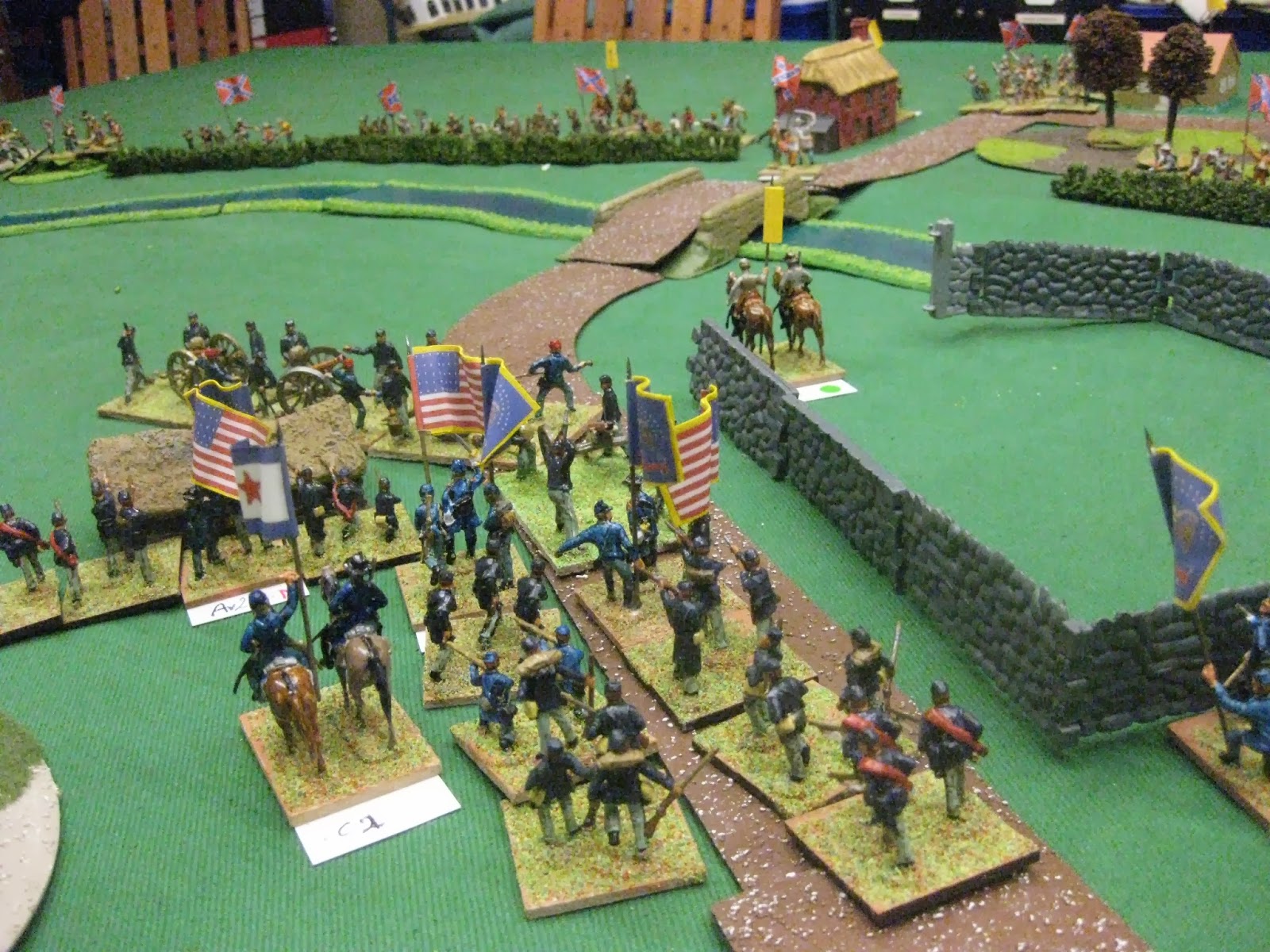 So we stormed up the road (hah! when movement is dice controlled), and split our forces either side of the road. I took the right of the road with a few battalions of foot. Richard took the left, and had all the guns and some foot. 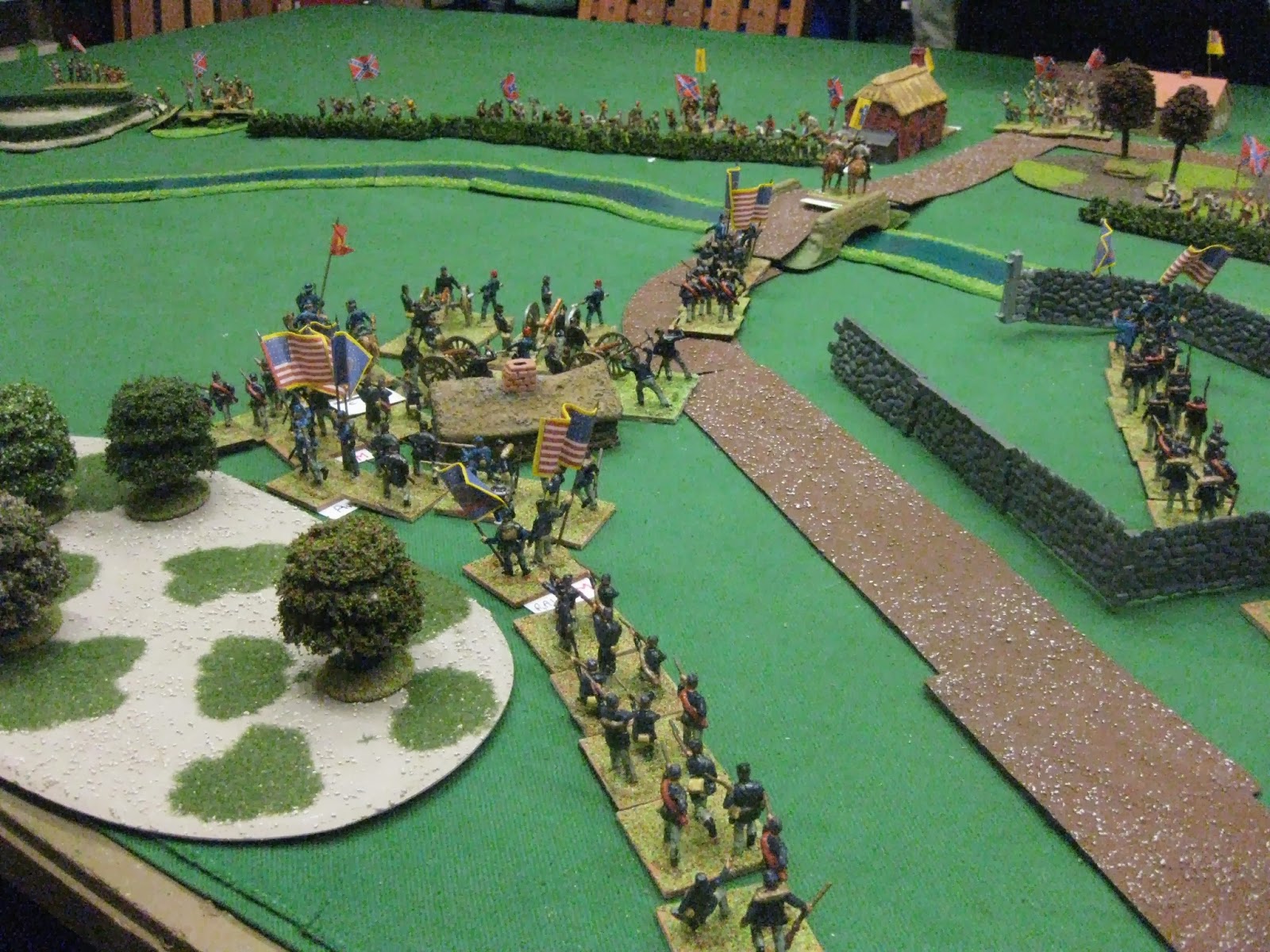 We went for it in bold strokes. A Yankee column rushed the bridge, on its way to storm the farmhouse, and as you can see below I forced the River line. 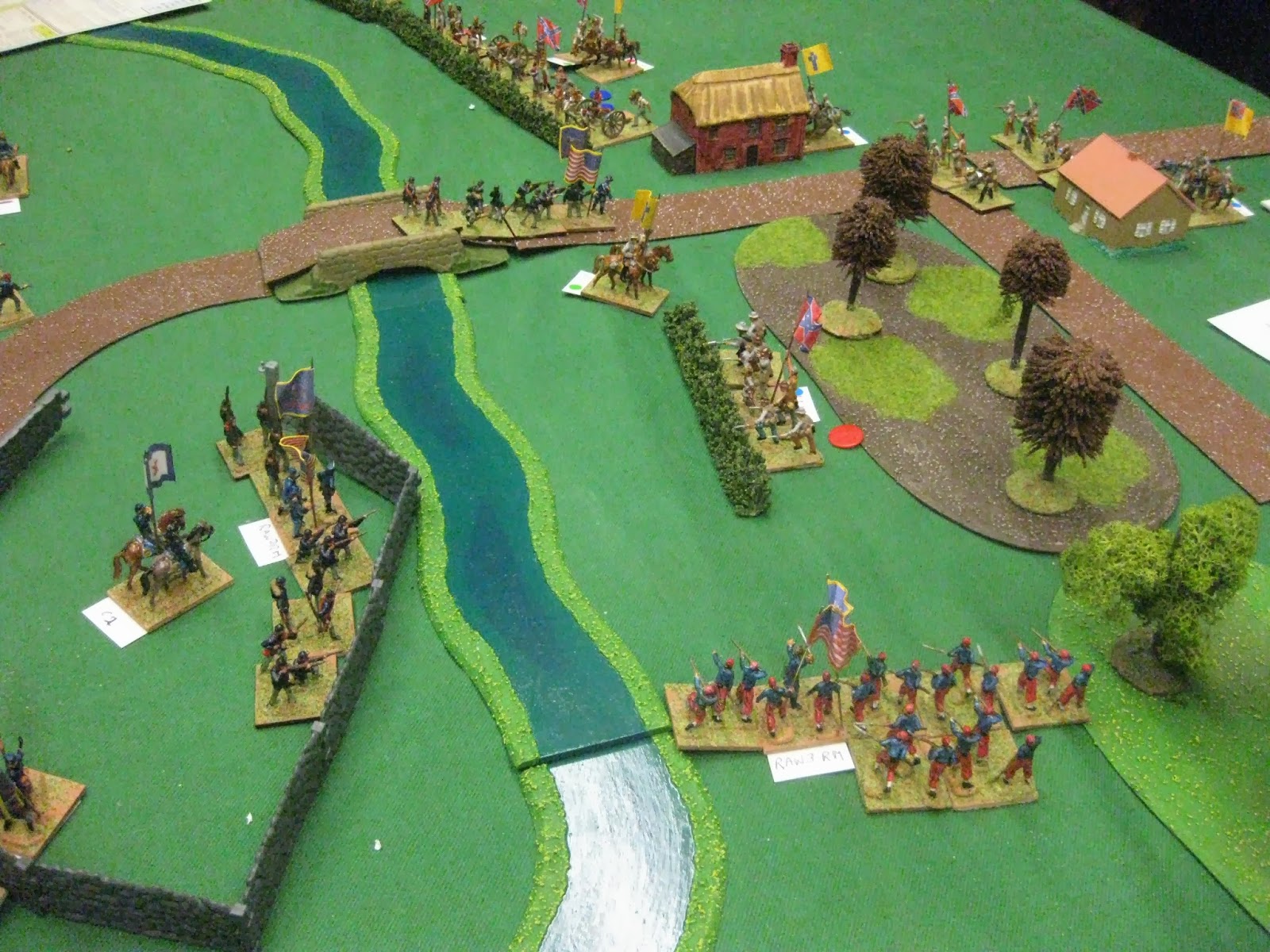 With my Zouaves over the river it would surely quickly be up for the Rebs. 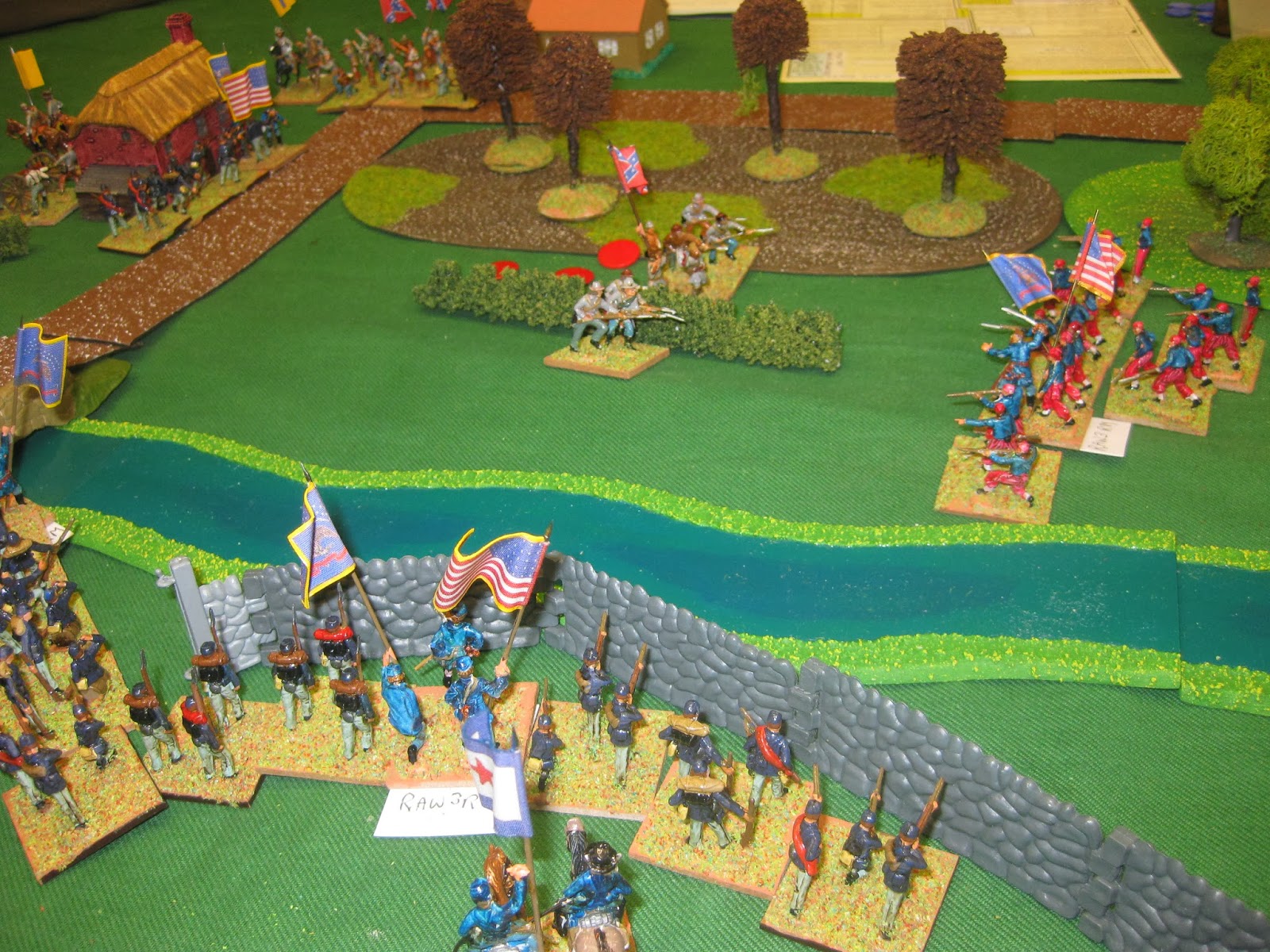 Alas the Rebs inflicted a hit or two, and I was held up by minor morale failures. 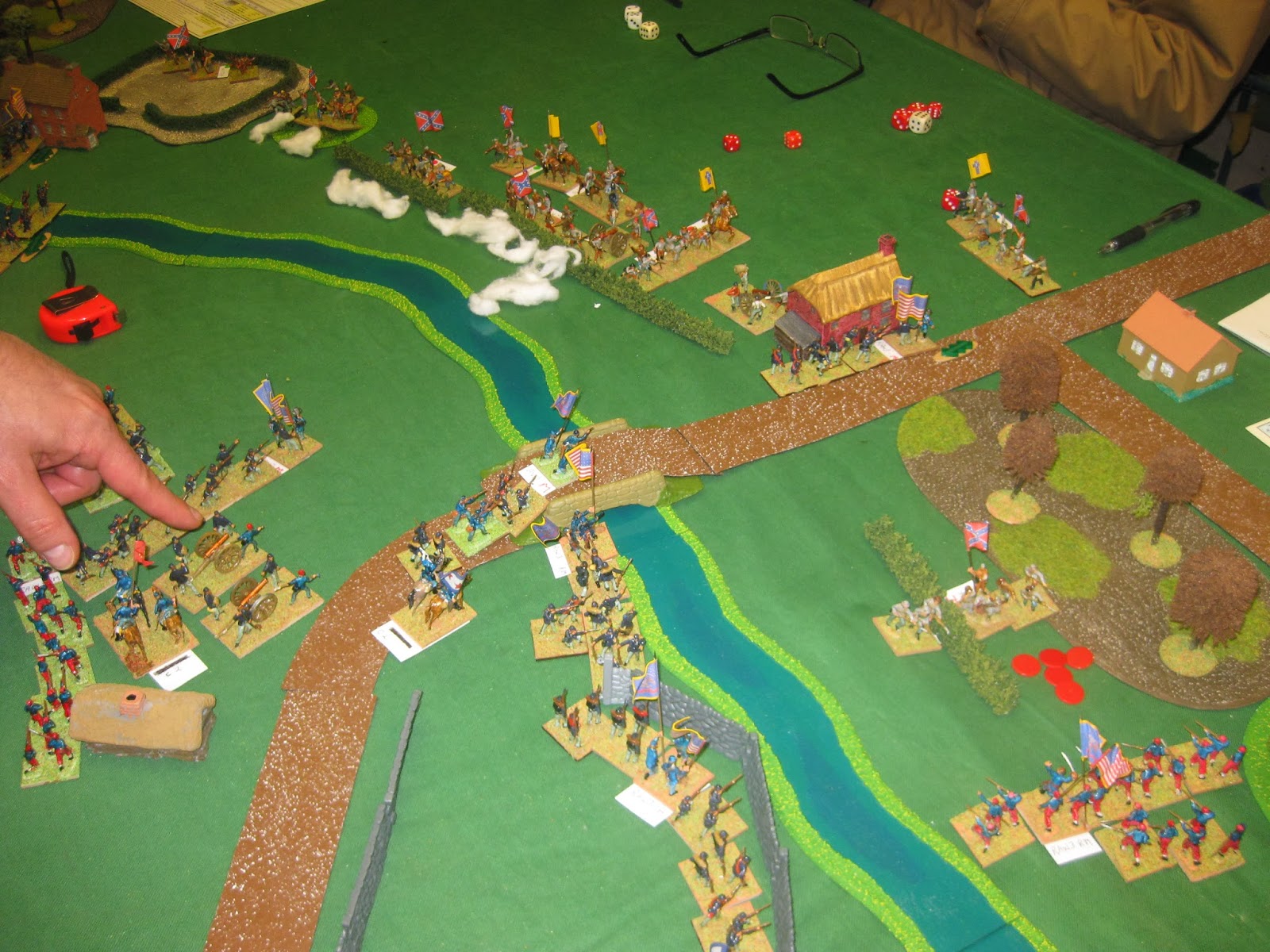 With our guns deployed in the middle, and troops occupying the central building we were feeling pretty good about things. The Rebs blazed away with everything they had as Richard started to send columns across the river. 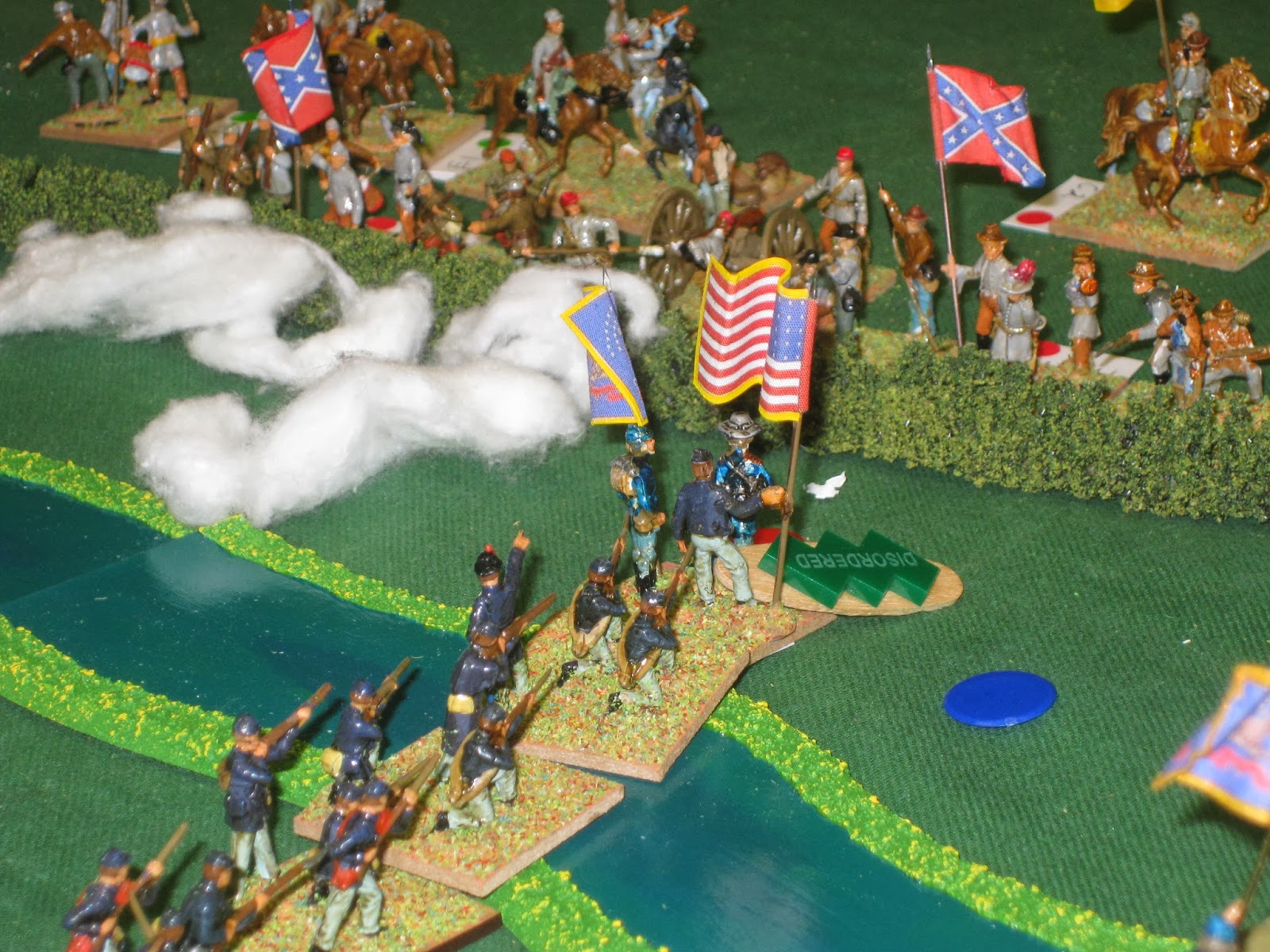 Meanwhile I had finally overrun the Rebs on my flank, and then gone to provide support to the troops in the house, who were being subjected to close range artillery fire. 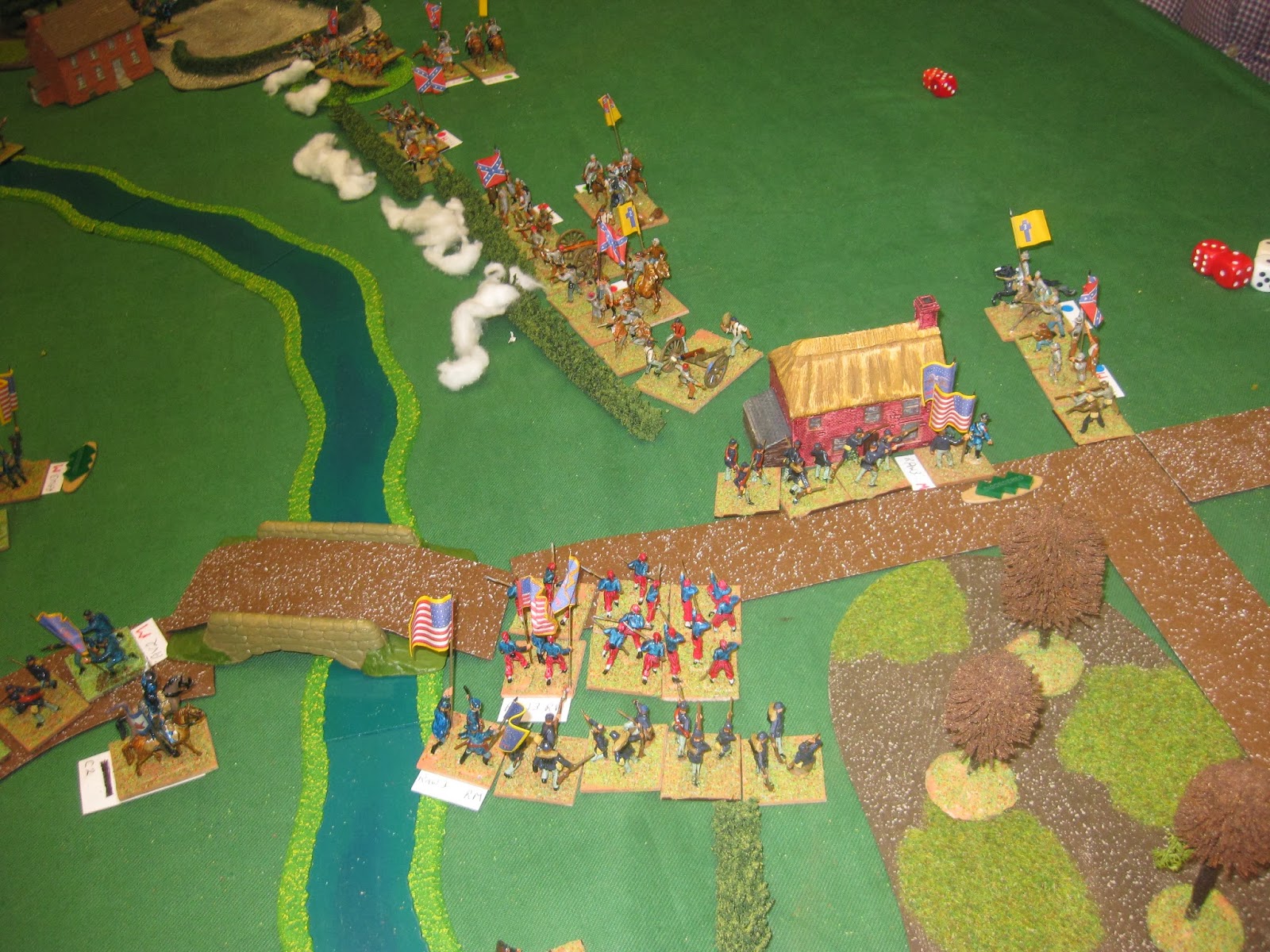 My Zouave charge was "bounced" and we were ready to go again when we stopped.

It is fair to say that the fixes Will had put in to fix the moans we had a Bull Run just made things worse the other way. Phil arrived half way through and by the end of the game said in exasperation "Will, you know what outcomes you want. When are we going to see fast play rules written by you giving the results you want".

In the post game discussion on our Yahoo group Will announced that he is going to write some ACW rules.

Excellent. I look forward to giving this battle another go when that's done.
Posted by Trebian at 12:40