This year's Society of Ancients Battleday is doing Montaperti, the famous battle between the Florentines and the Siennese in 1260.

Yup, I hadn't heard of it either until it was selected last year. Phil, of course, as a lover of all things Italian is completely clued up on the subject and has lots of suitable figures in shiny armour with brightly coloured banners.

We trialled some ideas on this last year. Since then Phil has done a load of work on it and I've done nothing.Well, you know how these things go.

That original game was played using Armati, IIRC. For this refight Phil has settled on using "Basic Impetus", the free version of Impetus. Not a set we've used before, but they are written by a pair of Italians, so it has a sort of neatness in its conception as a choice for the game. Phil sent me a detailed map of the terrain, which I succeeded in doing a passable job of turning into a table top layout: 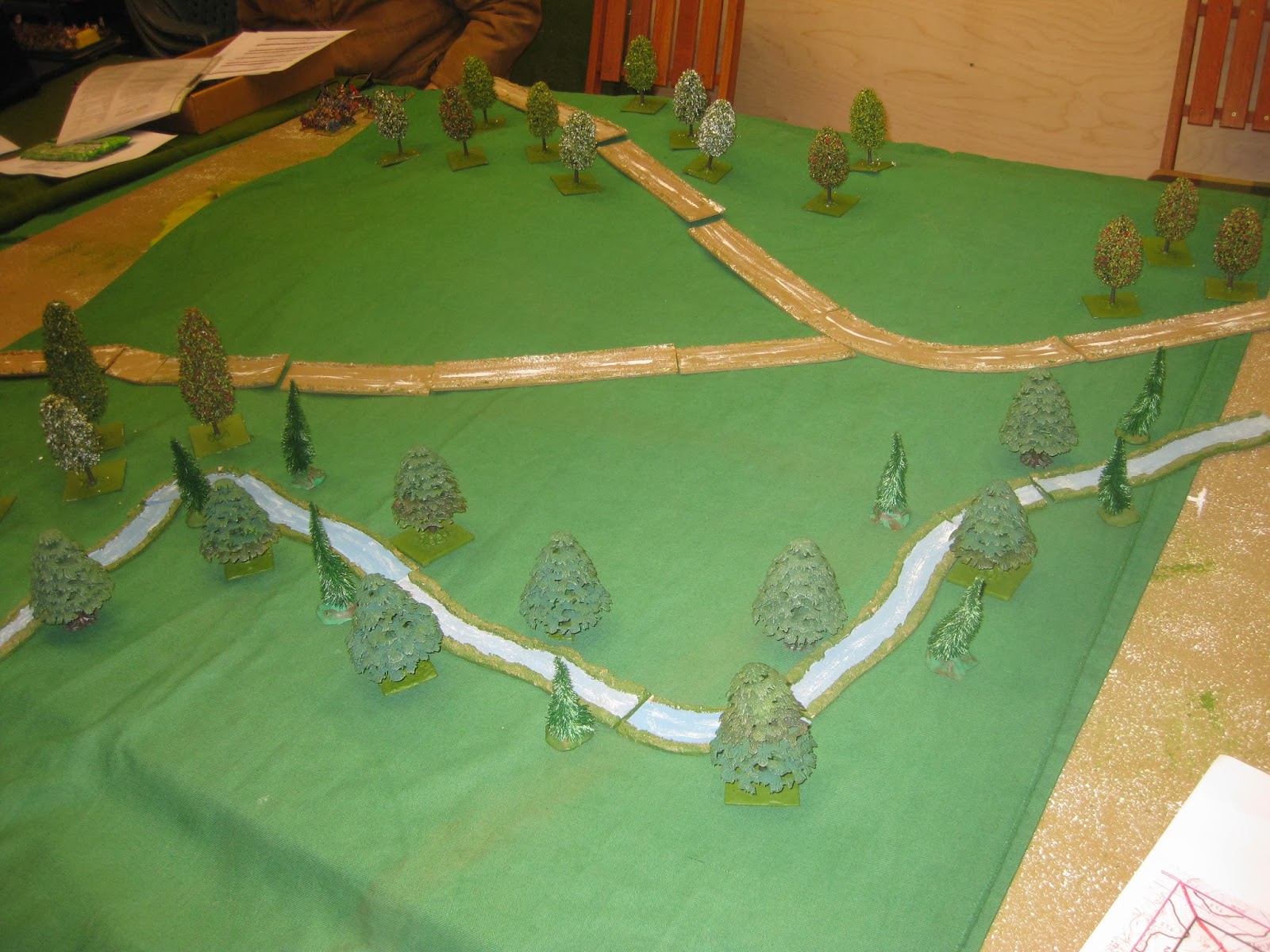 Accounts of the battle are a bit confused. Well, actually, as I understand the accounts of the battle from either side do not tally on most of the major points. The thought of fighting it twice, once using the Florentine account and once with the Siennese, springs immediately to mind, but I digress. 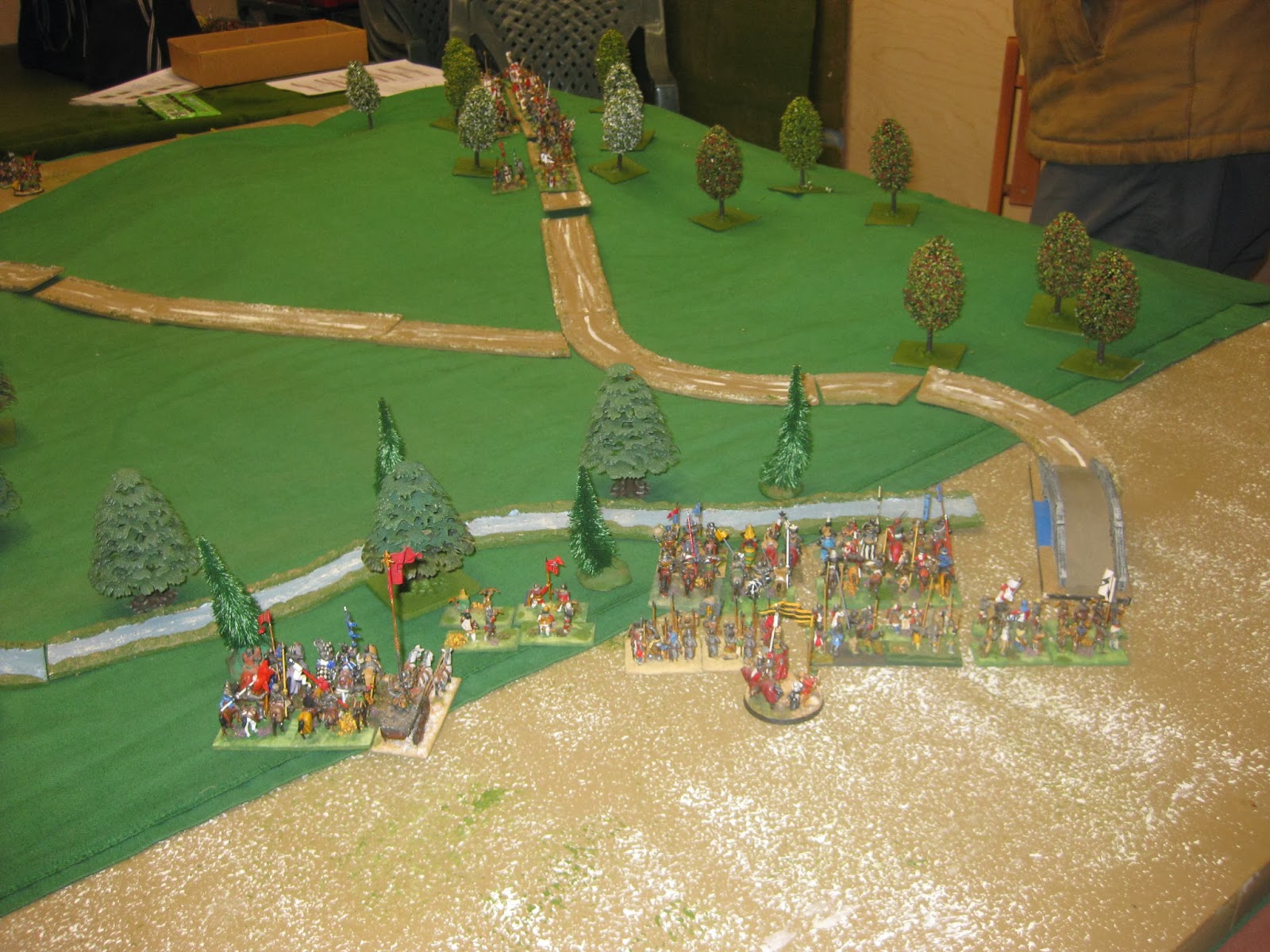 This pictures is "pre game". The Siennese are this side of the river, the Florentines are marching into position on the hillside. Some Siennese have been sent off on a flank march. 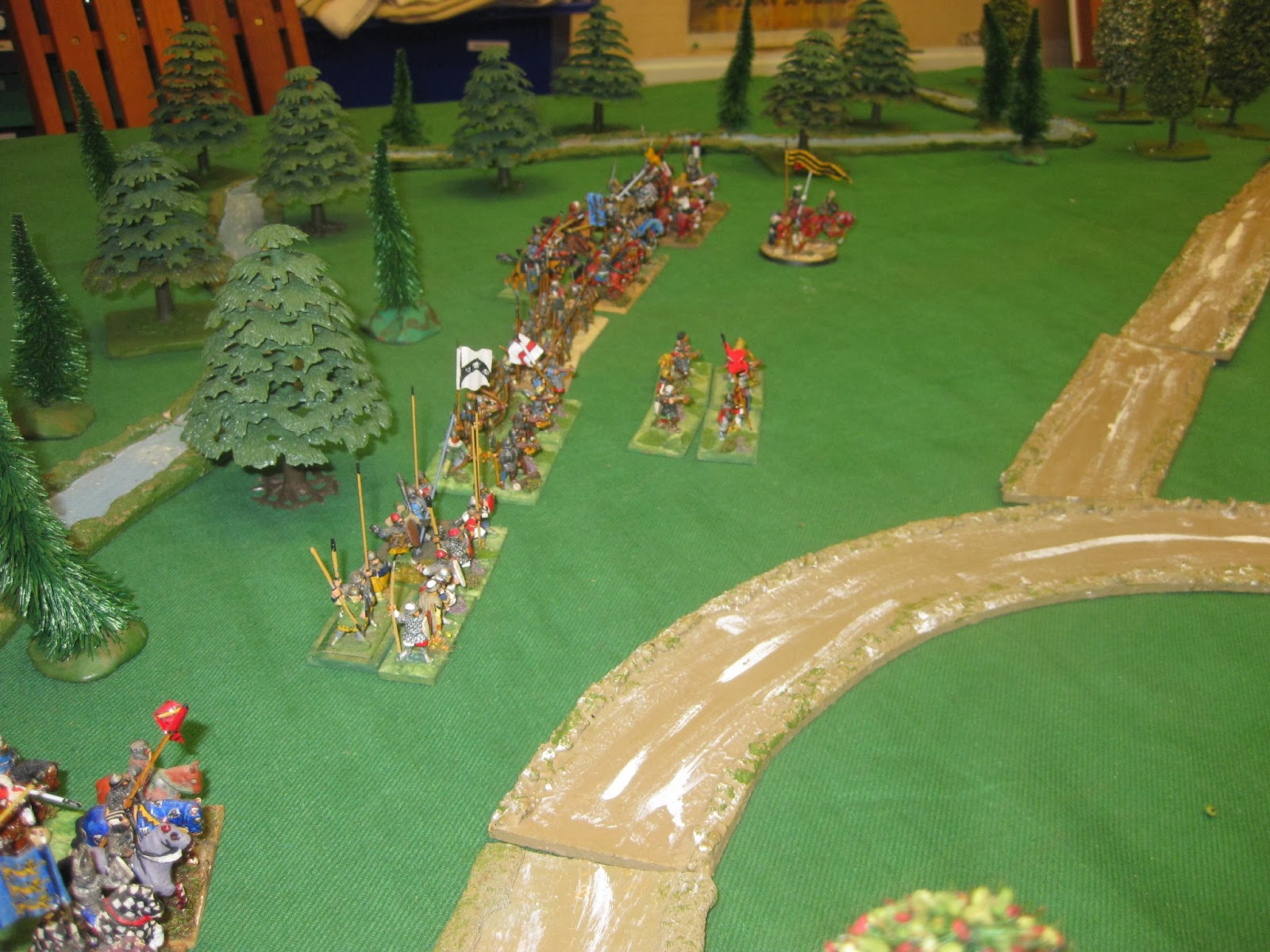 This is the Siennese line. The reserve with the banner cart thingy (can't remember what it's called. Sounds like a vegetable or a pasta dish) is sort of cut off in the corner. 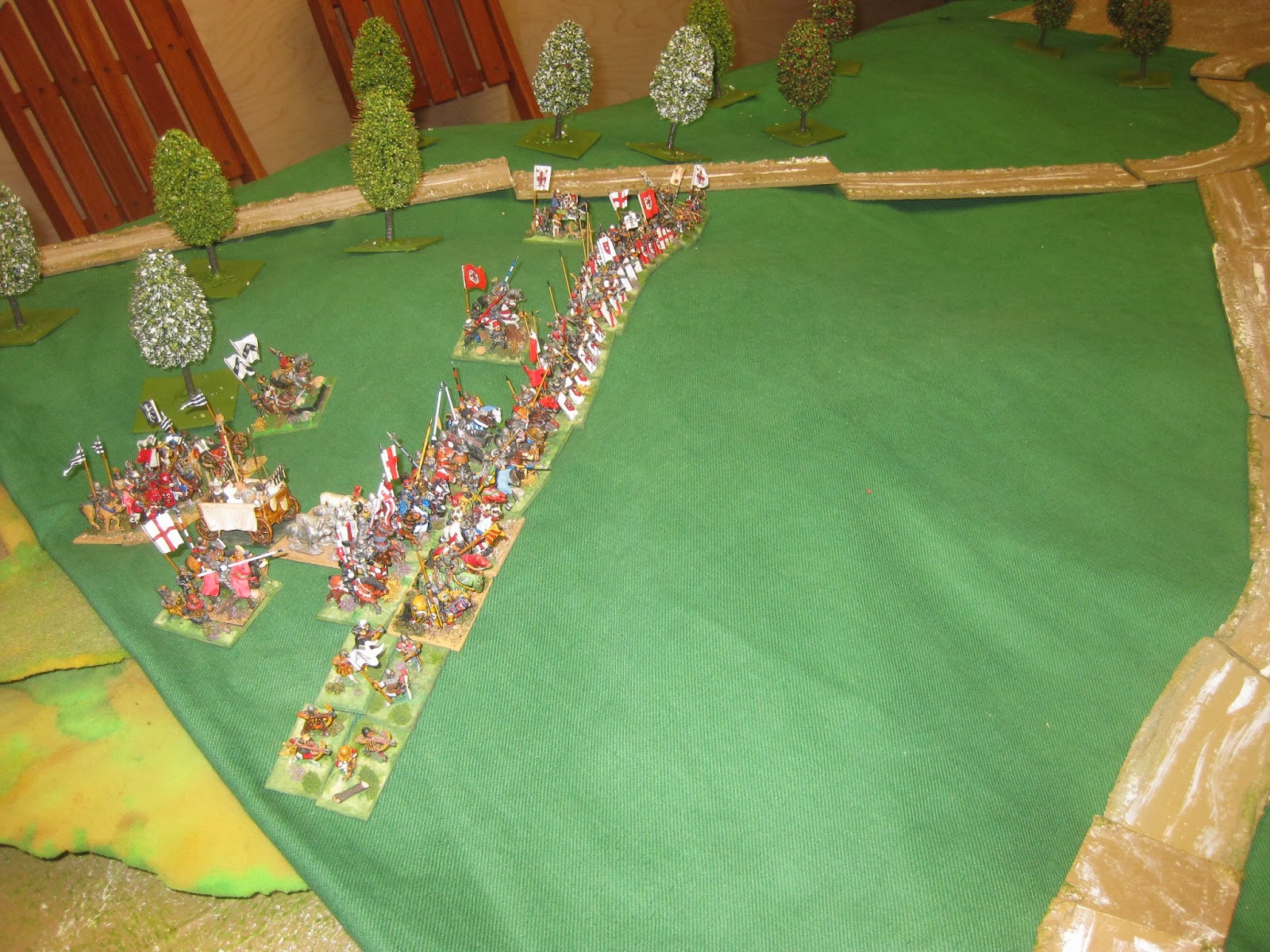 The Florentines are all lined up. The dodgy Ghibelline cavalry is to the rear.

Phil set the figures up with me, but he wasn't very well. Luckily Chris K soon turned up, and took over the Florentines. This doubled the number of people in the room who hadn't read the rules. 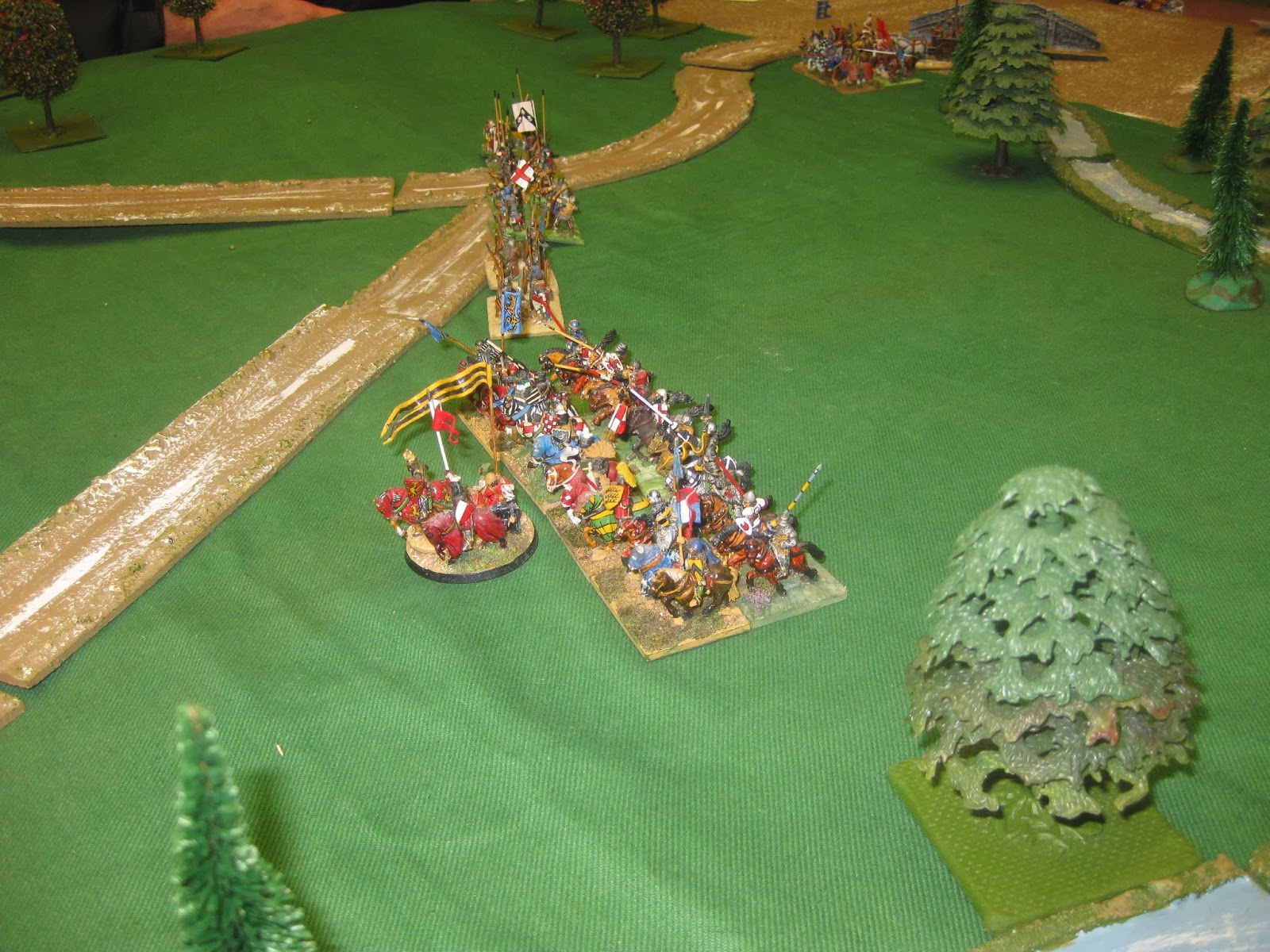 I started off by swinging my Frankish cavalry out to my left, heading for the Florentine cavalry on the ridge line. 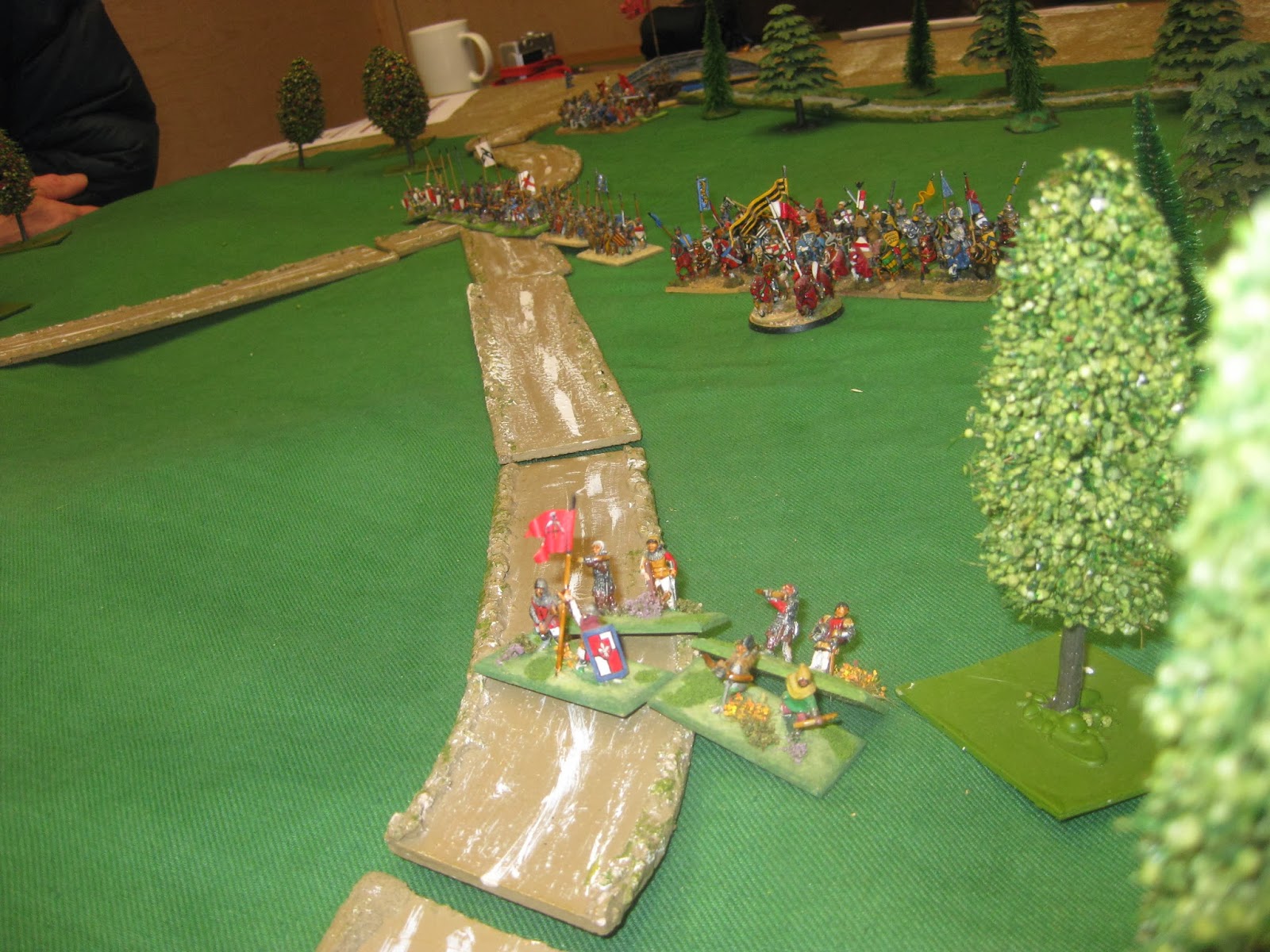 I sent some cannon fodder skirmishers out ahead to soak up any missiles from the enemy. Under these rules having Impetus makes a lot of difference to cavalry, and taking missile hits disorganises you so you lose it. Cunning, eh? 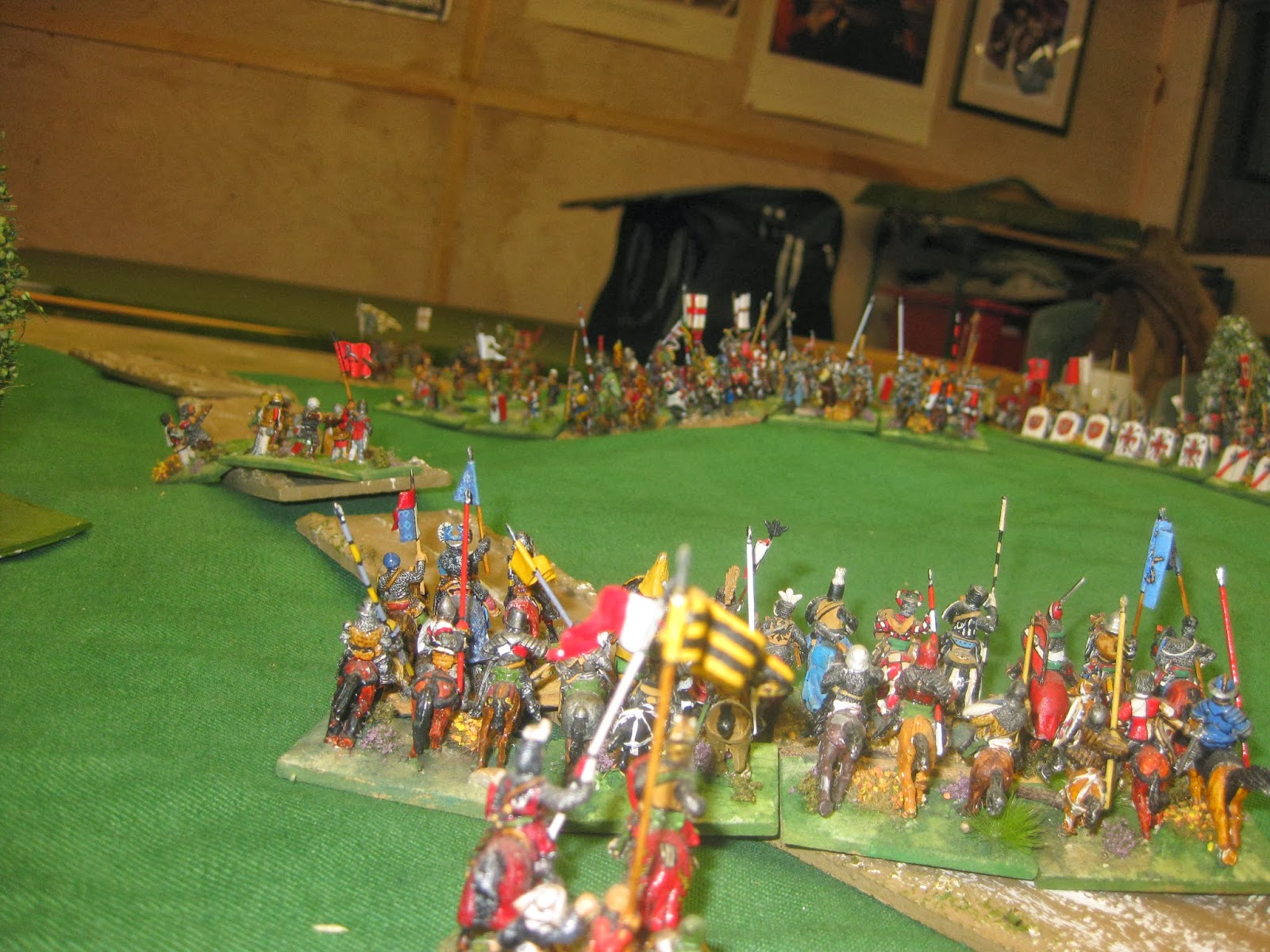 Here's a picture of the Florentine position, taken from behind my cavalry. Over on my right my infantry are closing into missile range, but who cares about them? 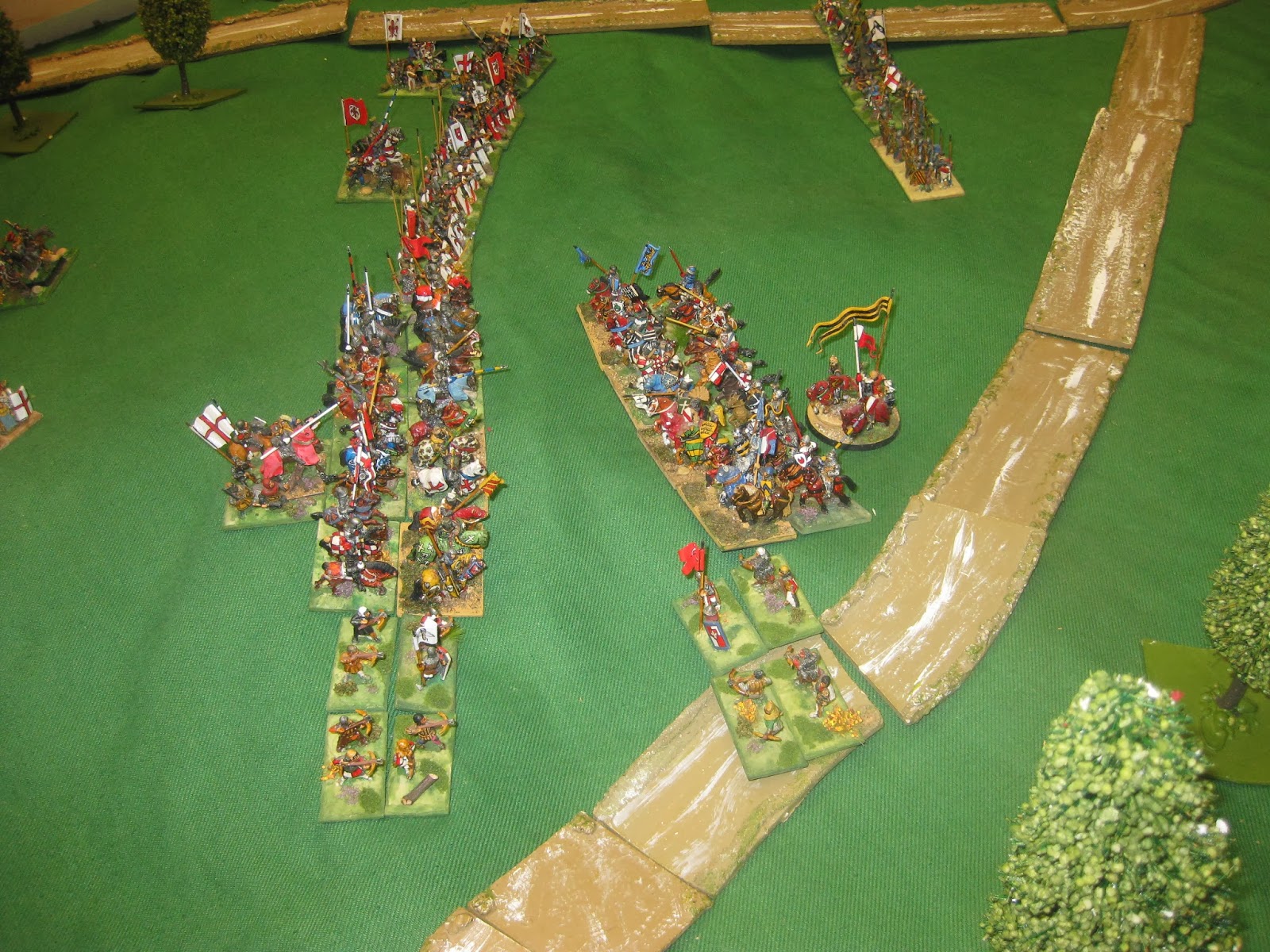 The cavalry get closer and finally.... 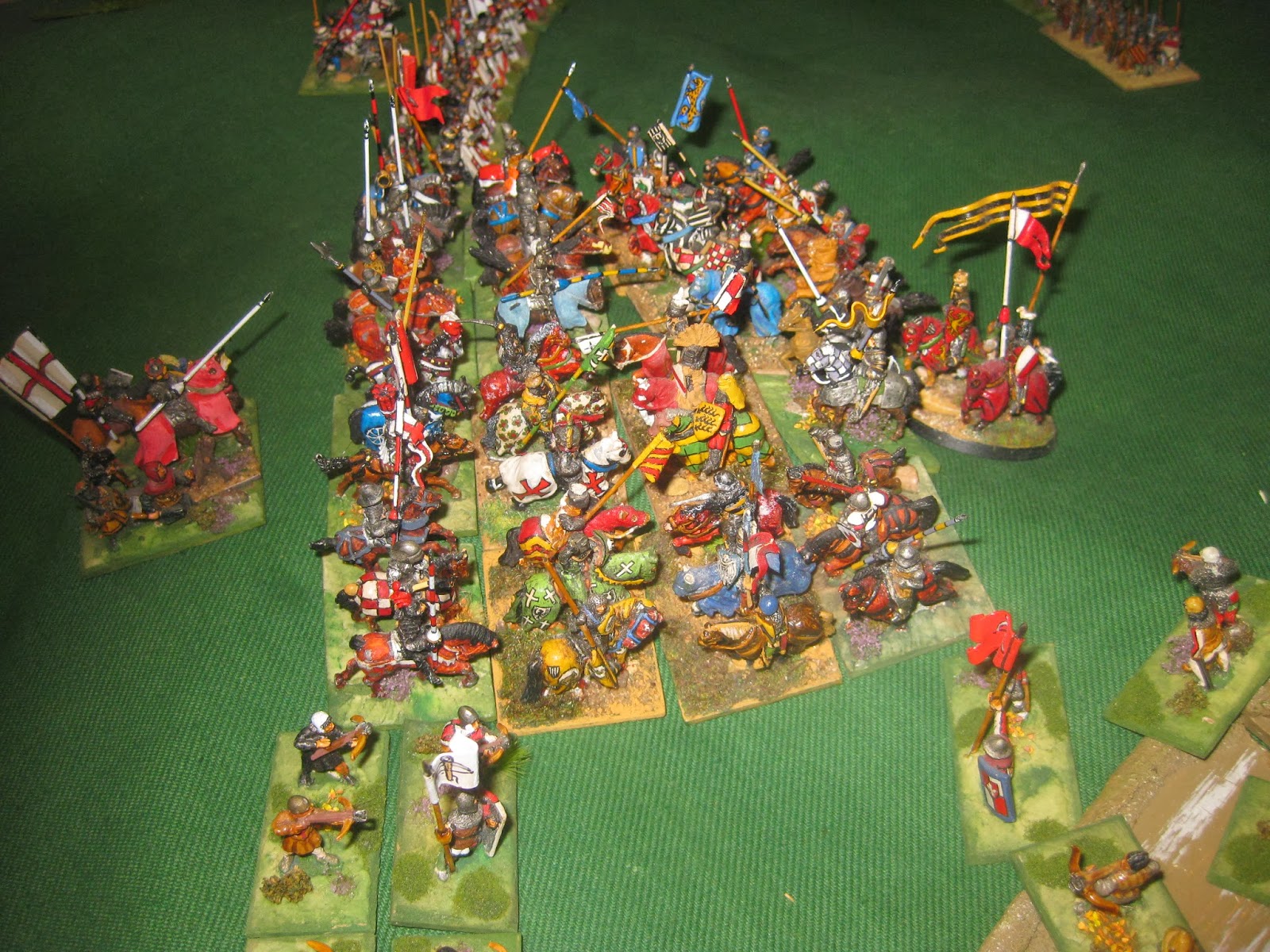 ...clash in a might melee. This was where we started to get a bit lost with the exact rule sequence. 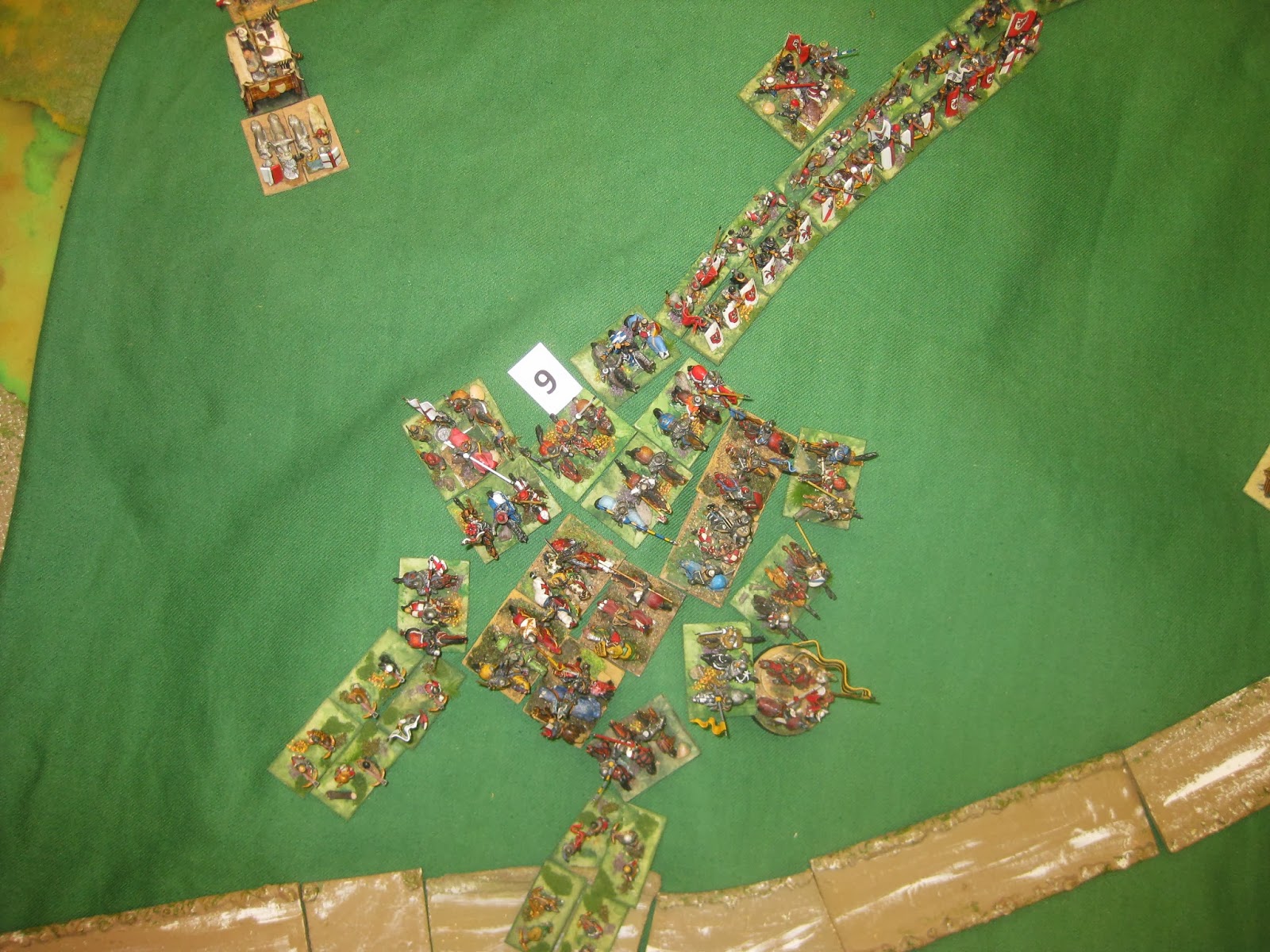 I won the combat, but we overlooked the pushbacks. This was either:

Obviously everything is a matter of perspective. 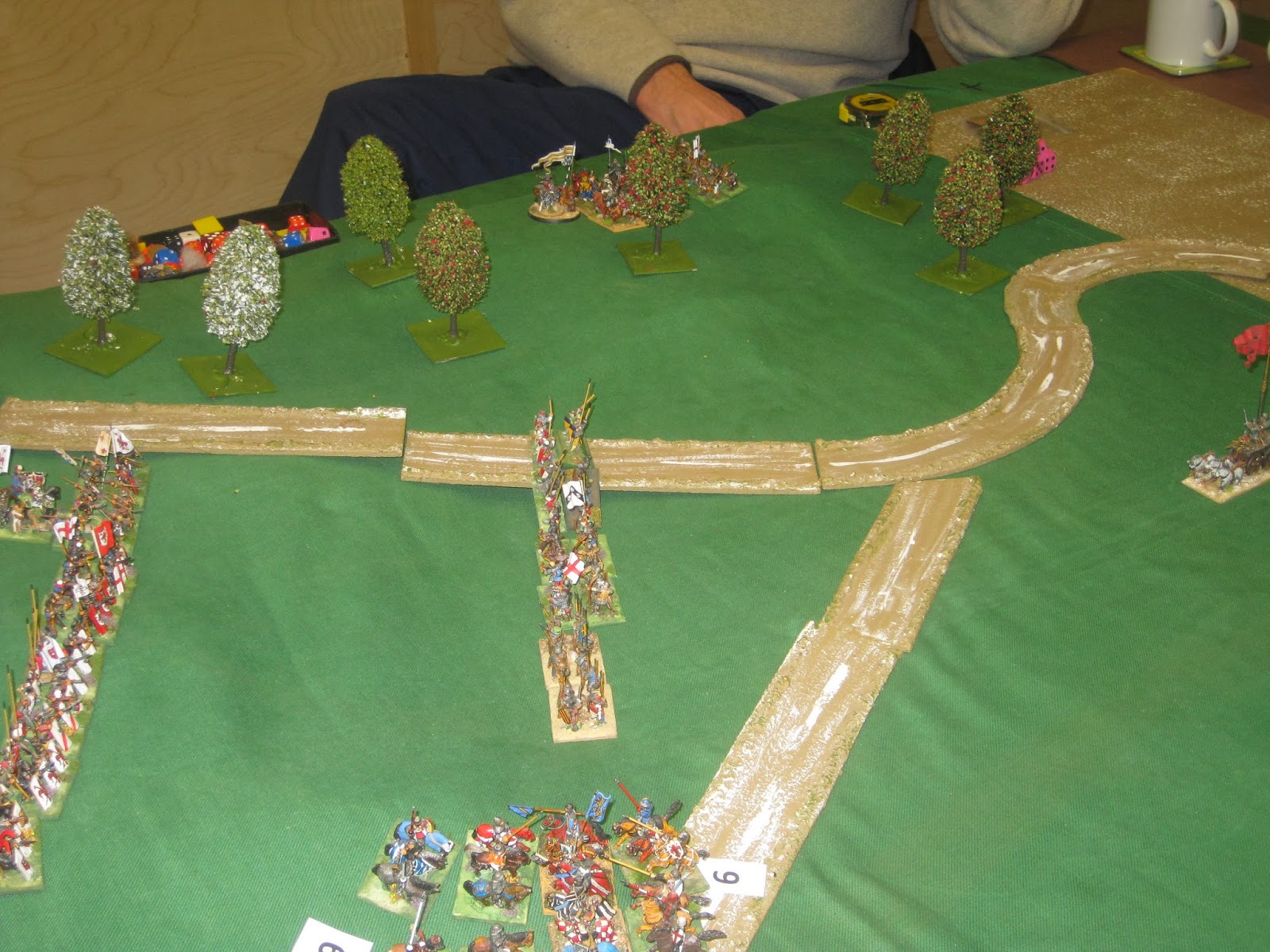 Second round of melee and I got kicked down the hill on one side. You can see the fight in the bottom of the picture, as my infantry advance on the Florentine line. 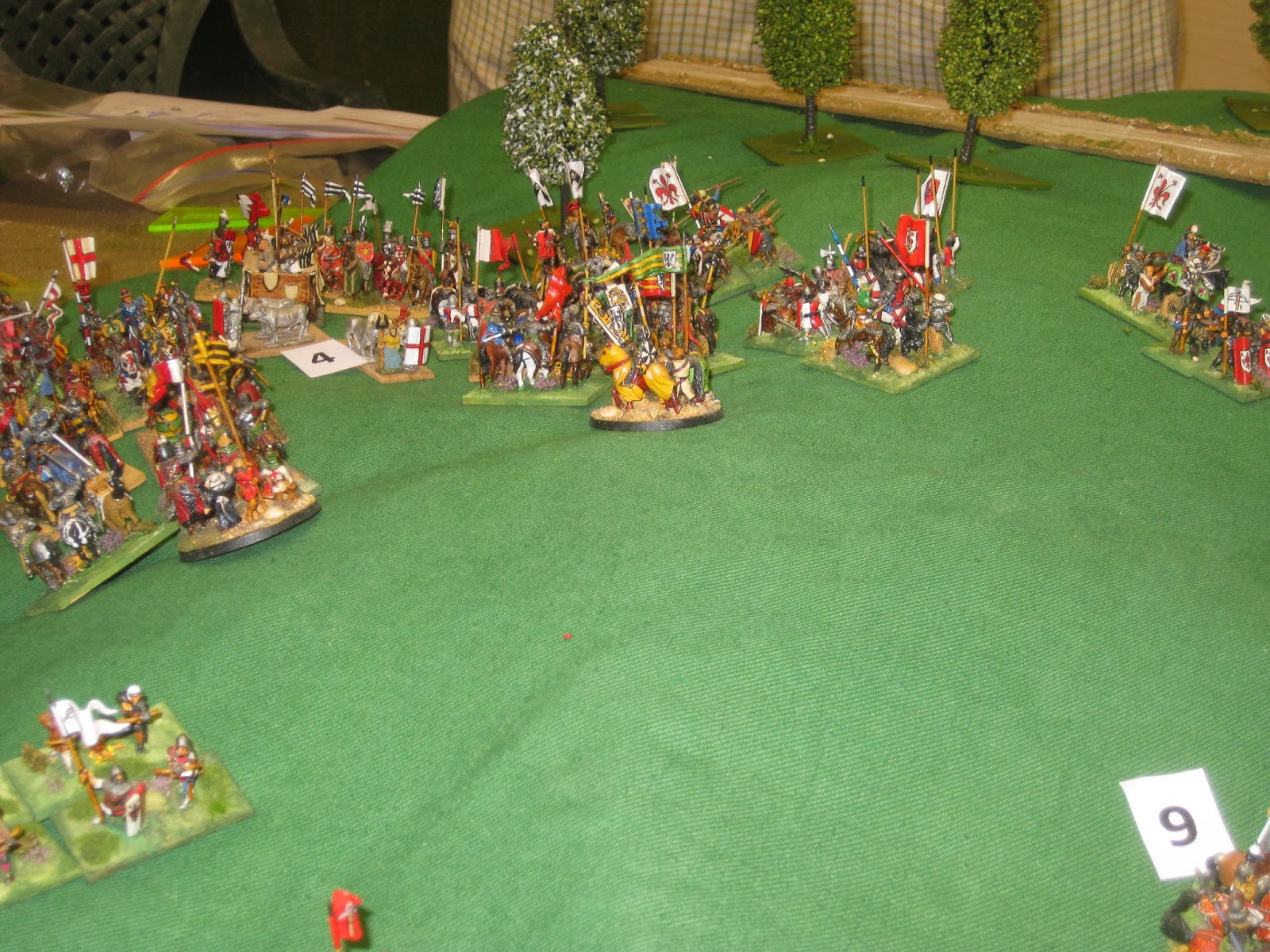 I brought up my reserve cavalry, and pushed them into the gap. At least that might be what this picture shows. 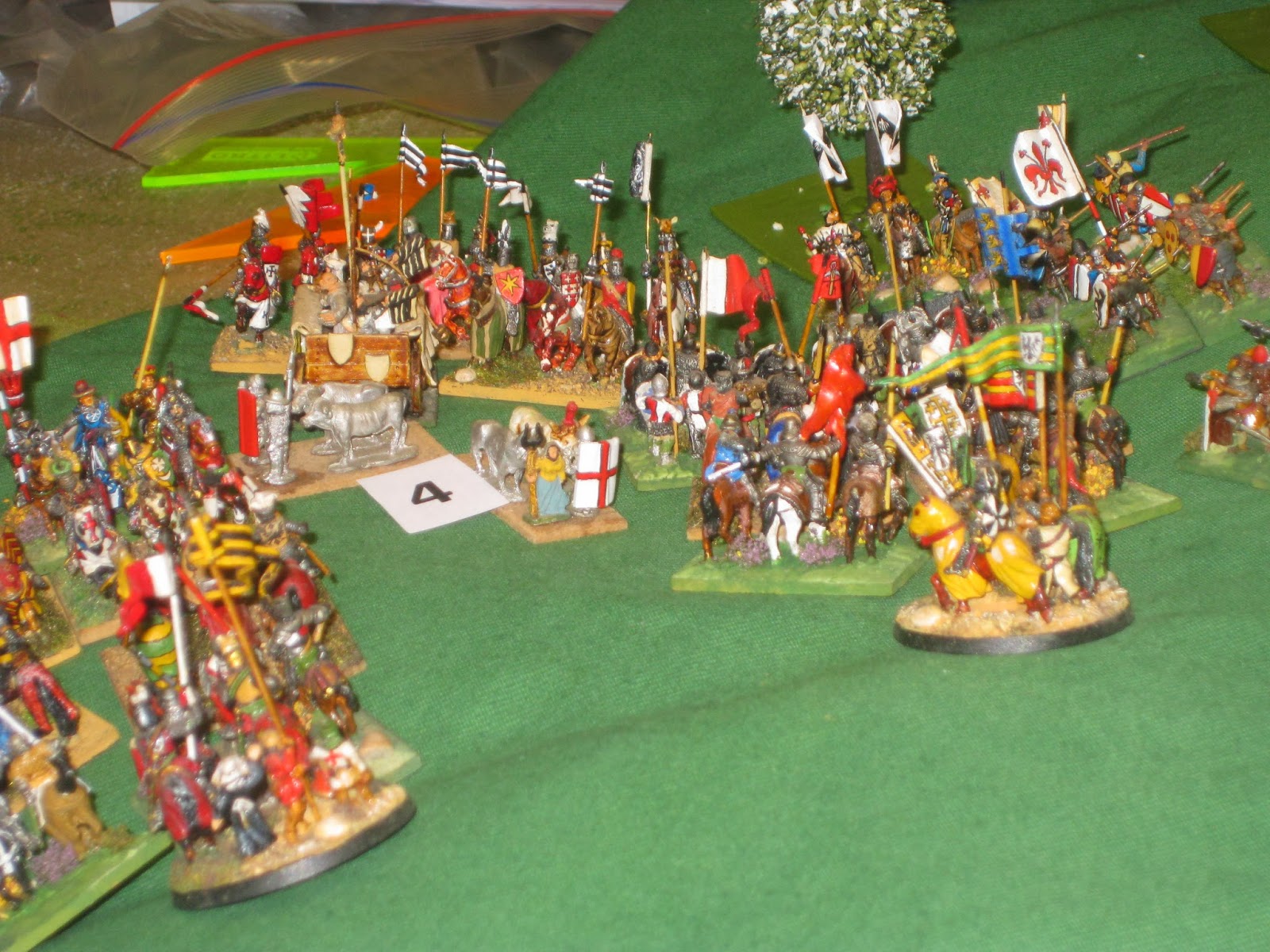 I have no idea what is going on here. I think Chris might be retiring his infantry line.  Or his dodgy Ghibellines have betrayed him. Something like that. 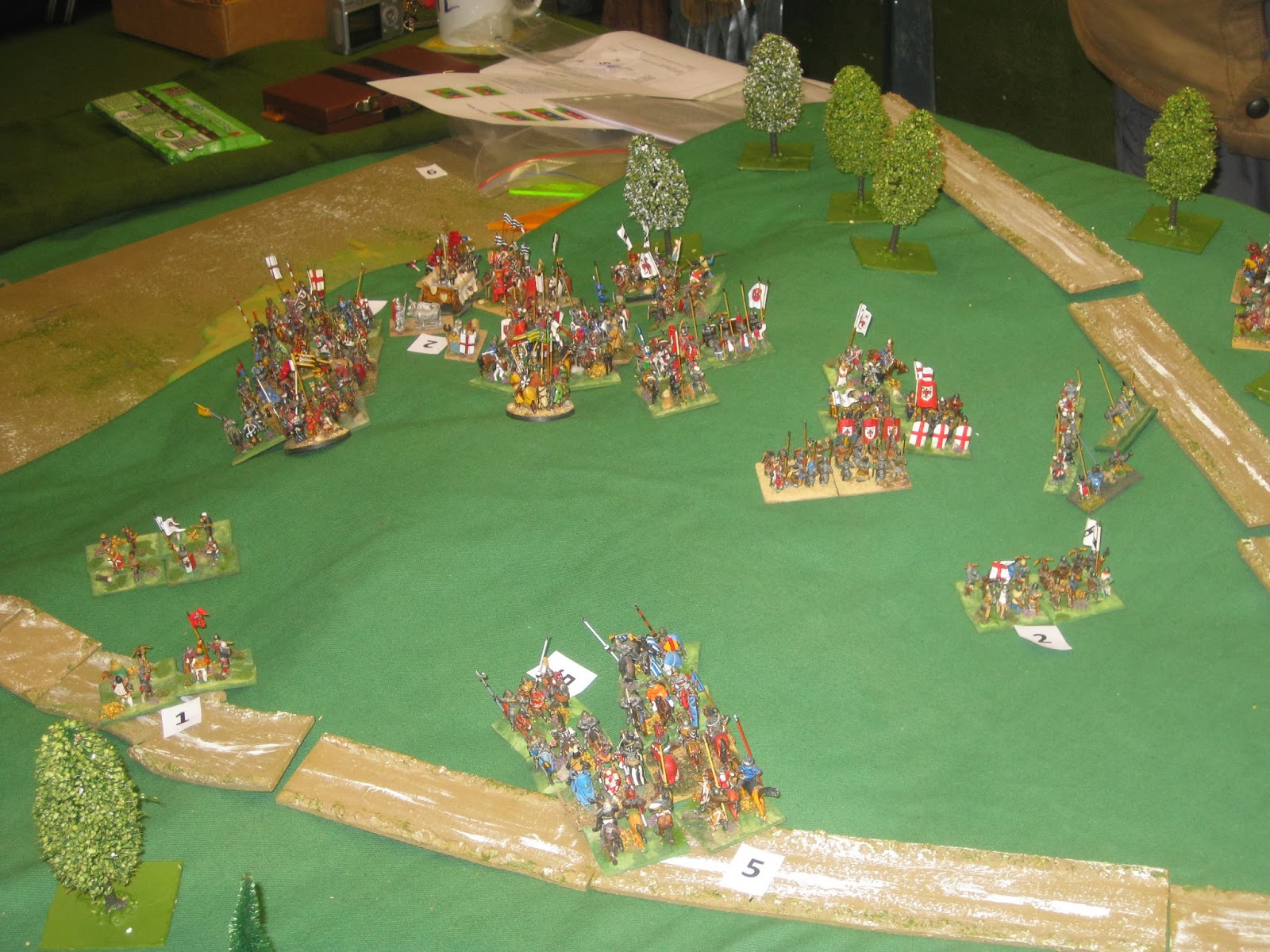 Yes, clearly the Florentine position is collapsing, due to my brilliant generalship. I think that might be a flank attack appearing on the right hand side.. 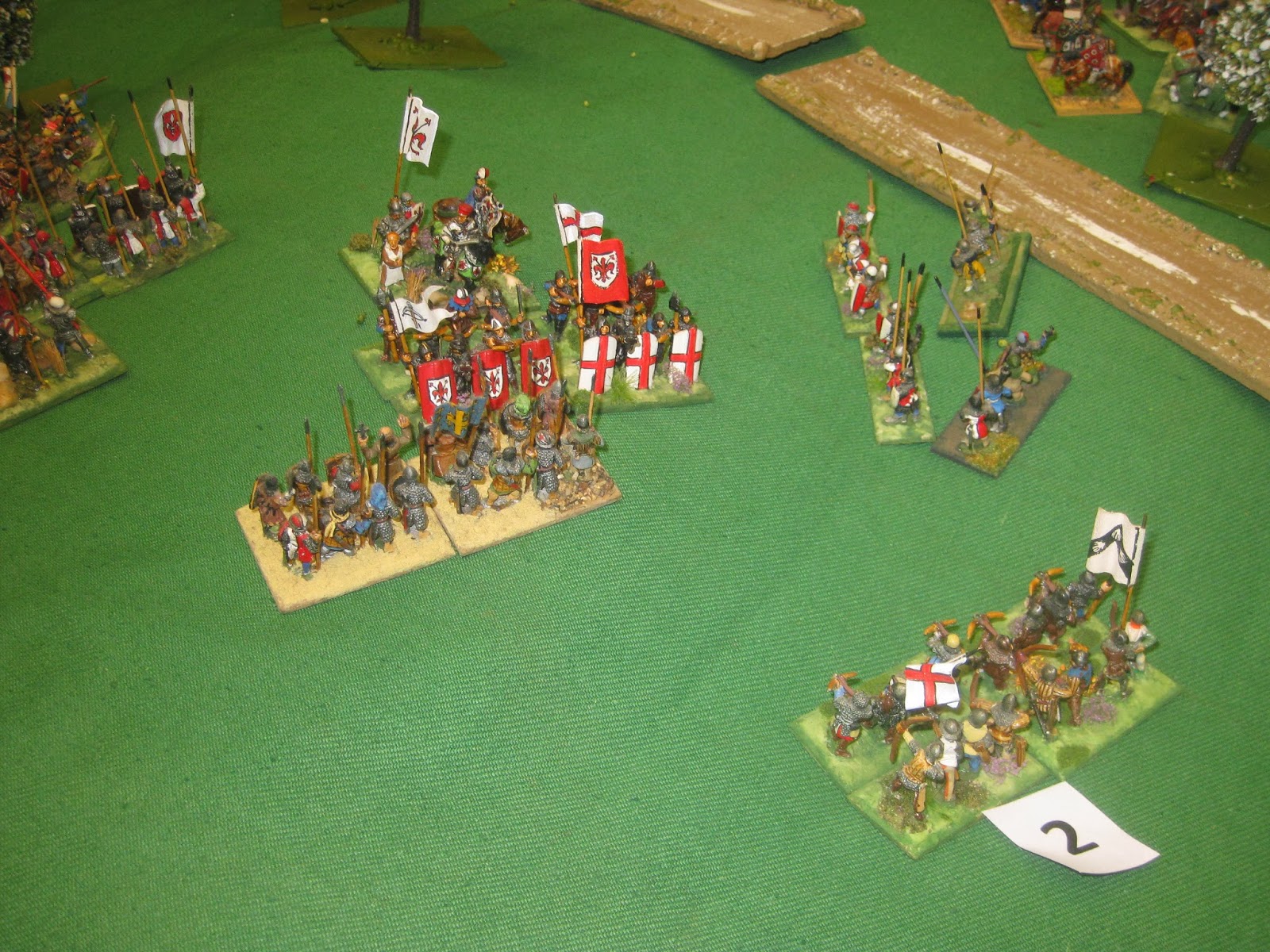 I have the Florentine crossbowmen in a vice like grip. Almost. 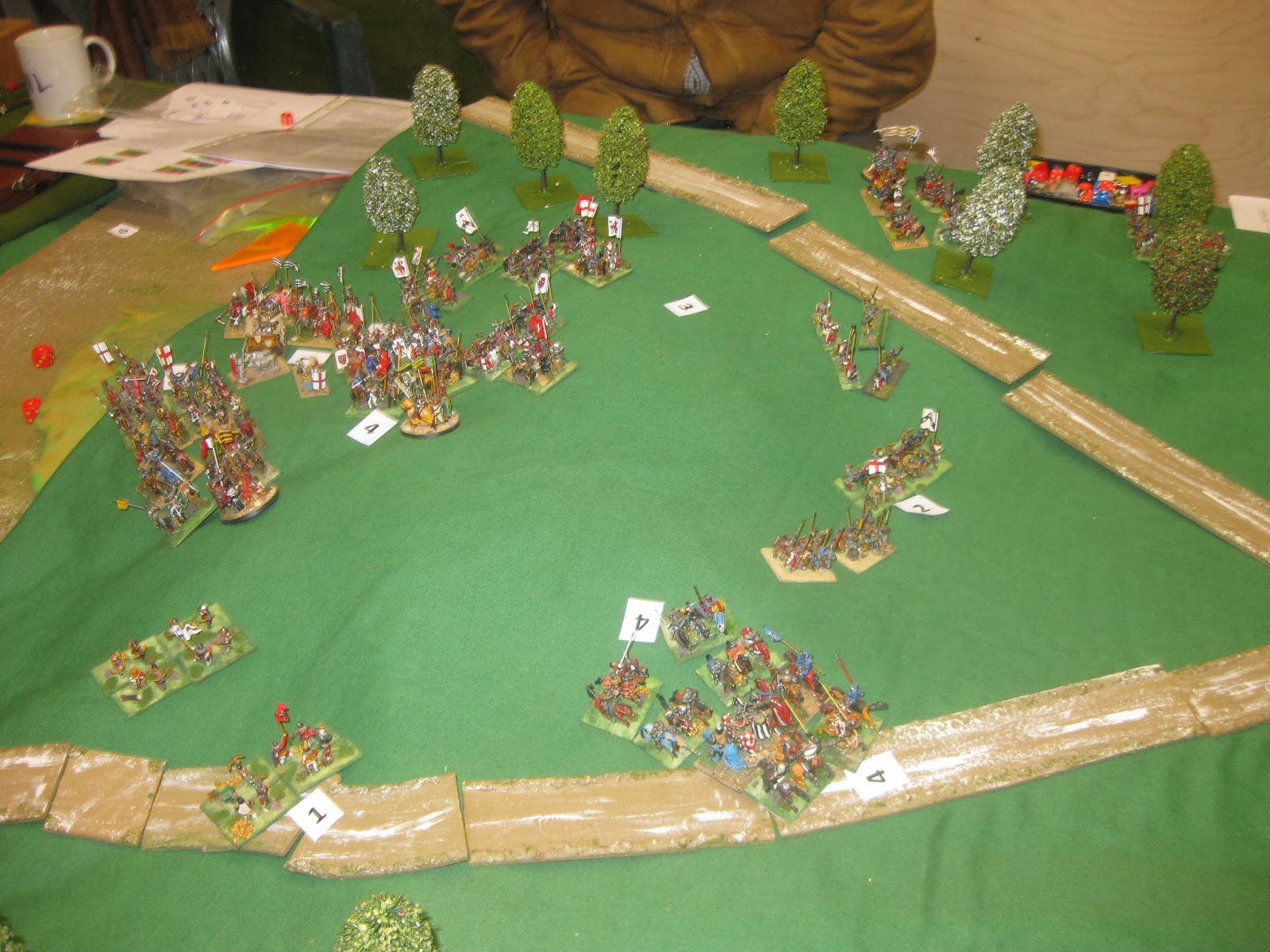 It's nearly all over. 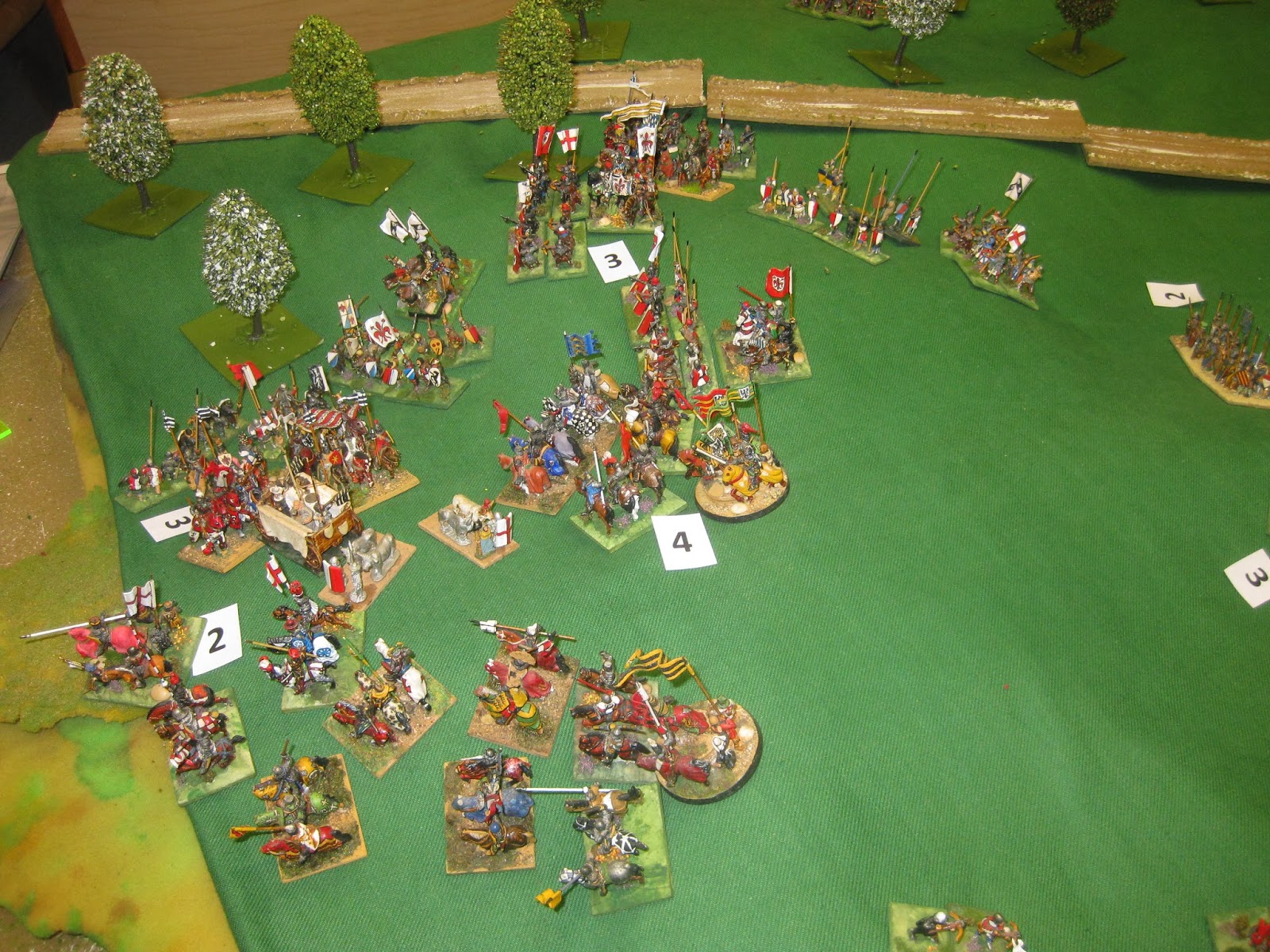 The white markers are the units' strength points, once they've taken hits.

A fairly chaotic battle that captured medieval warfare quite well. We (well Phil) sorted the rules out as we went along, and it was making more sense as we got to the end of the game. We need to play this again.

Basic Impetus had some nice little design features that I think warrant closer attention. The units are the same foot print as Armati units, mostly, or those for AMW, so no problems for us there.
Posted by Trebian at 20:22