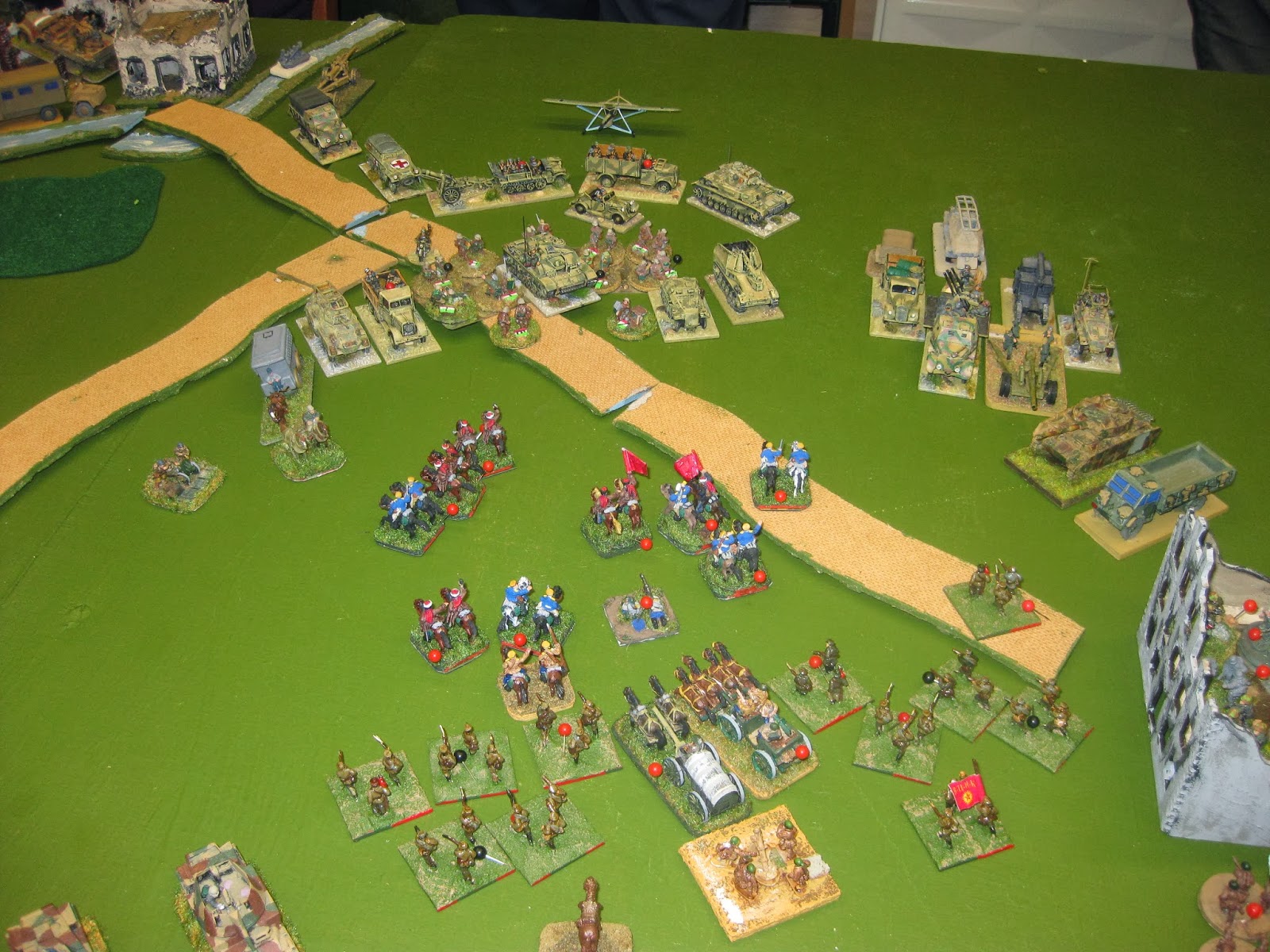 The Cossacks and their infantry supports saw off the initial panzer assault and wiped out the Hungarians. They'd taken a pounding in the process, and I had a suspicion they may have over extended their advance. 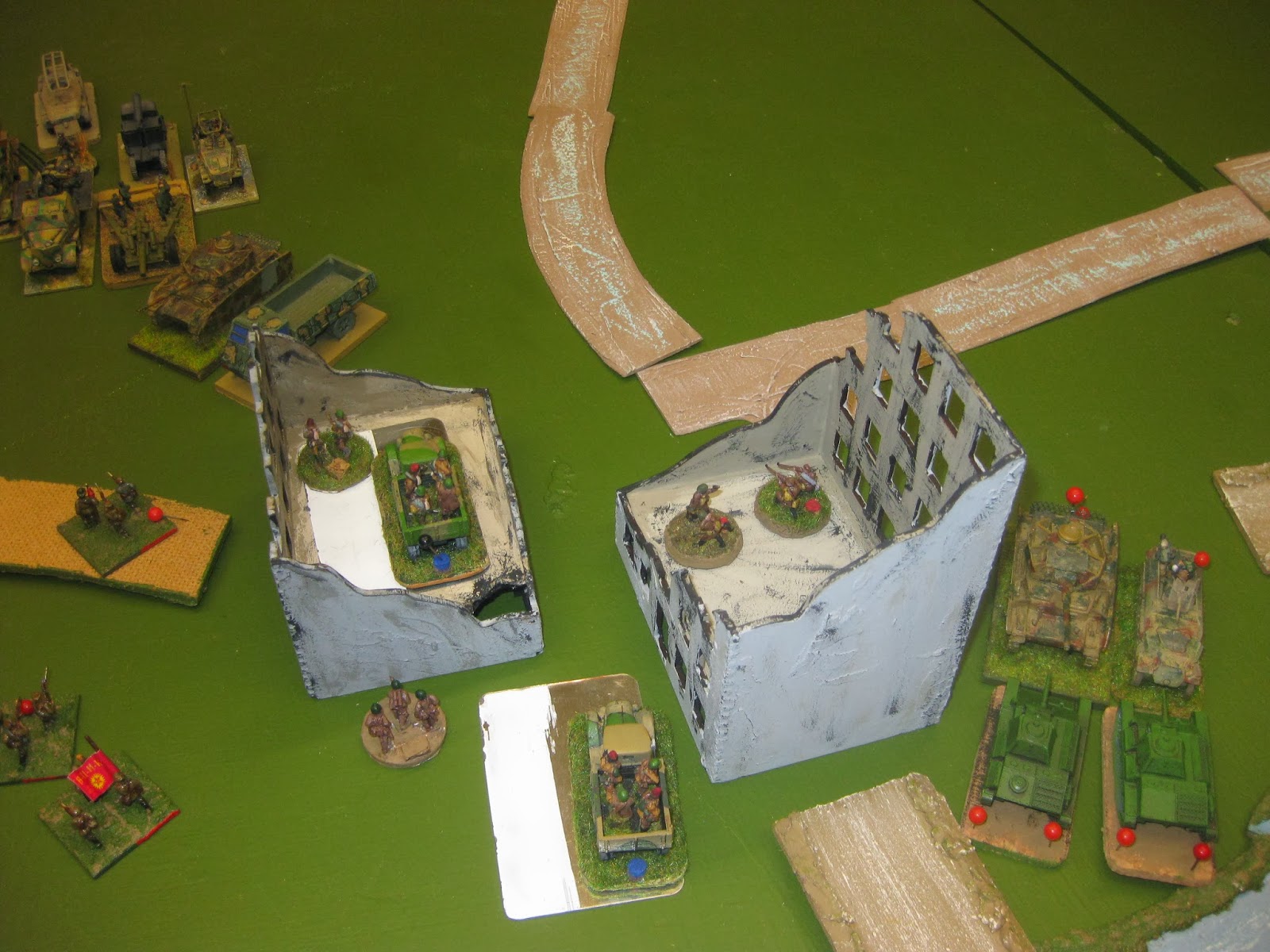 We had driven the Nazis out of Kharkov, but at an enormous cost. The Guards were quite badly battered, and the Germans were massing their panzers for an assault. They had air support as well. 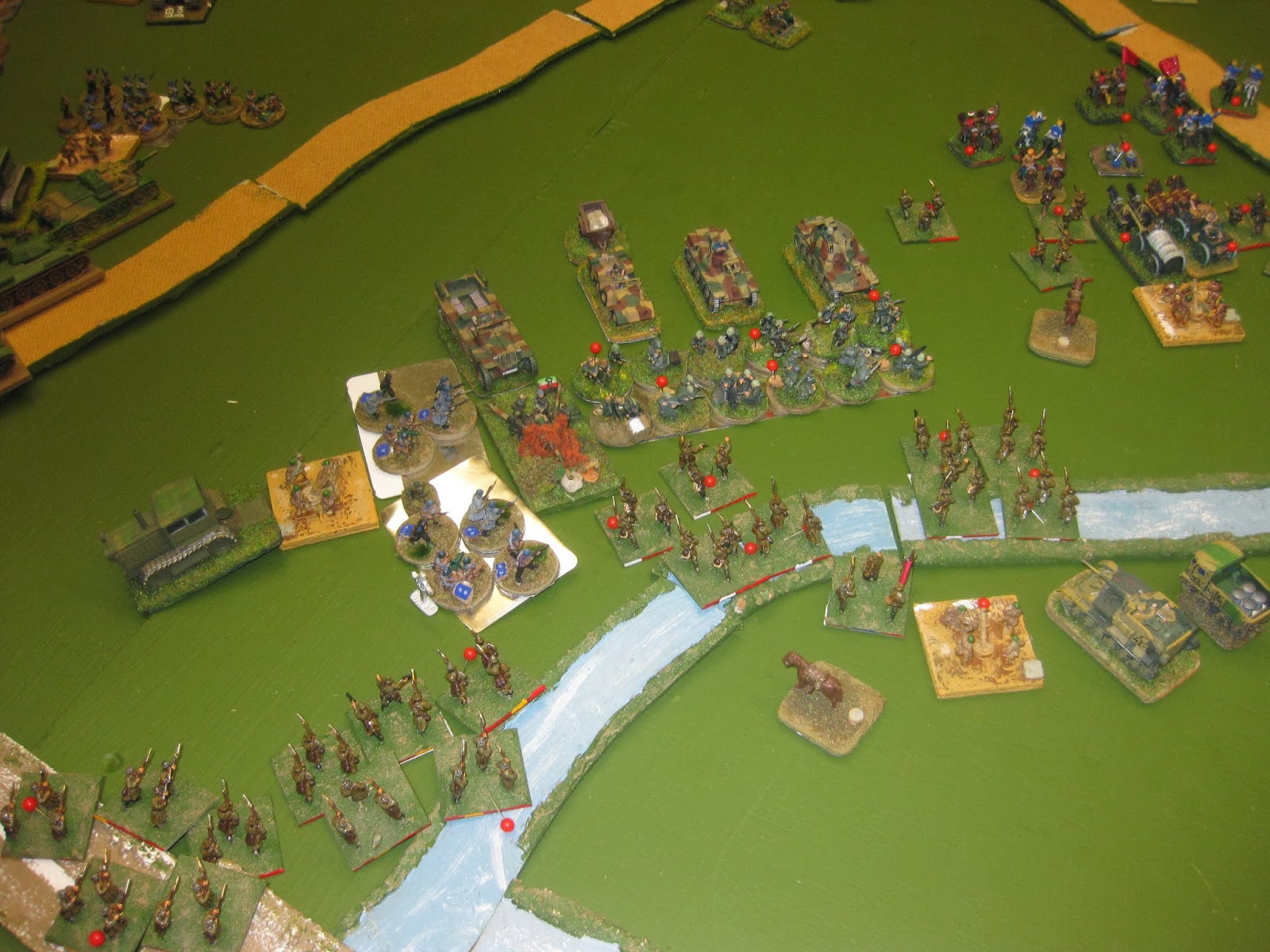 On my left I finally broke the Hungarians on my left, but it had been a long, hard, struggle. their dogged resistance was the most significant part of the battle. My inability to winkle them out of their foxholes meant that the Germans were eventually able to reinforce their positions in time. 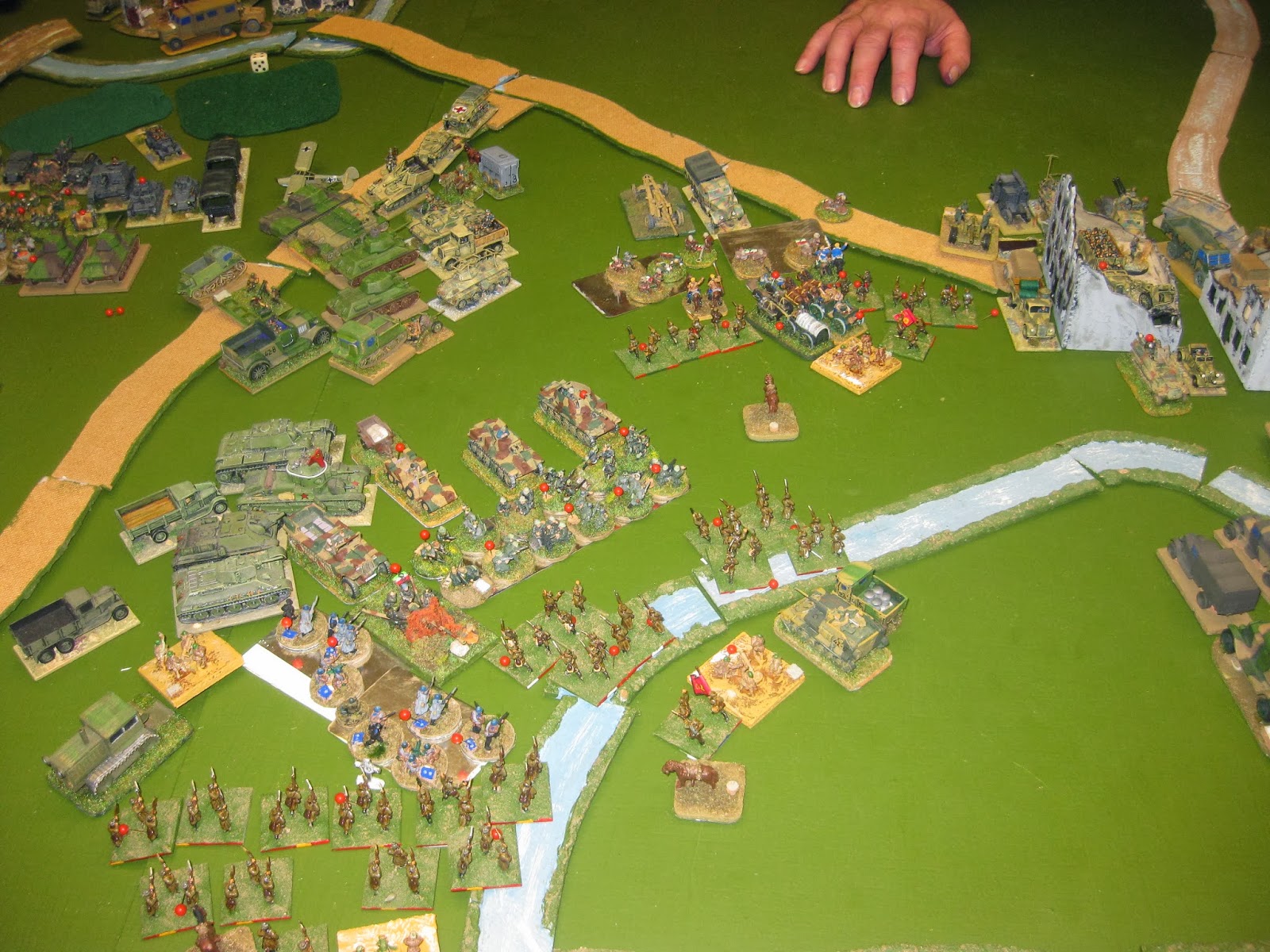 Russian armour starts to arrive in volume, and the river line will soon be mine. The SS panzers at the top of the screen are making mincemeat of my remaining cossacks, alas. 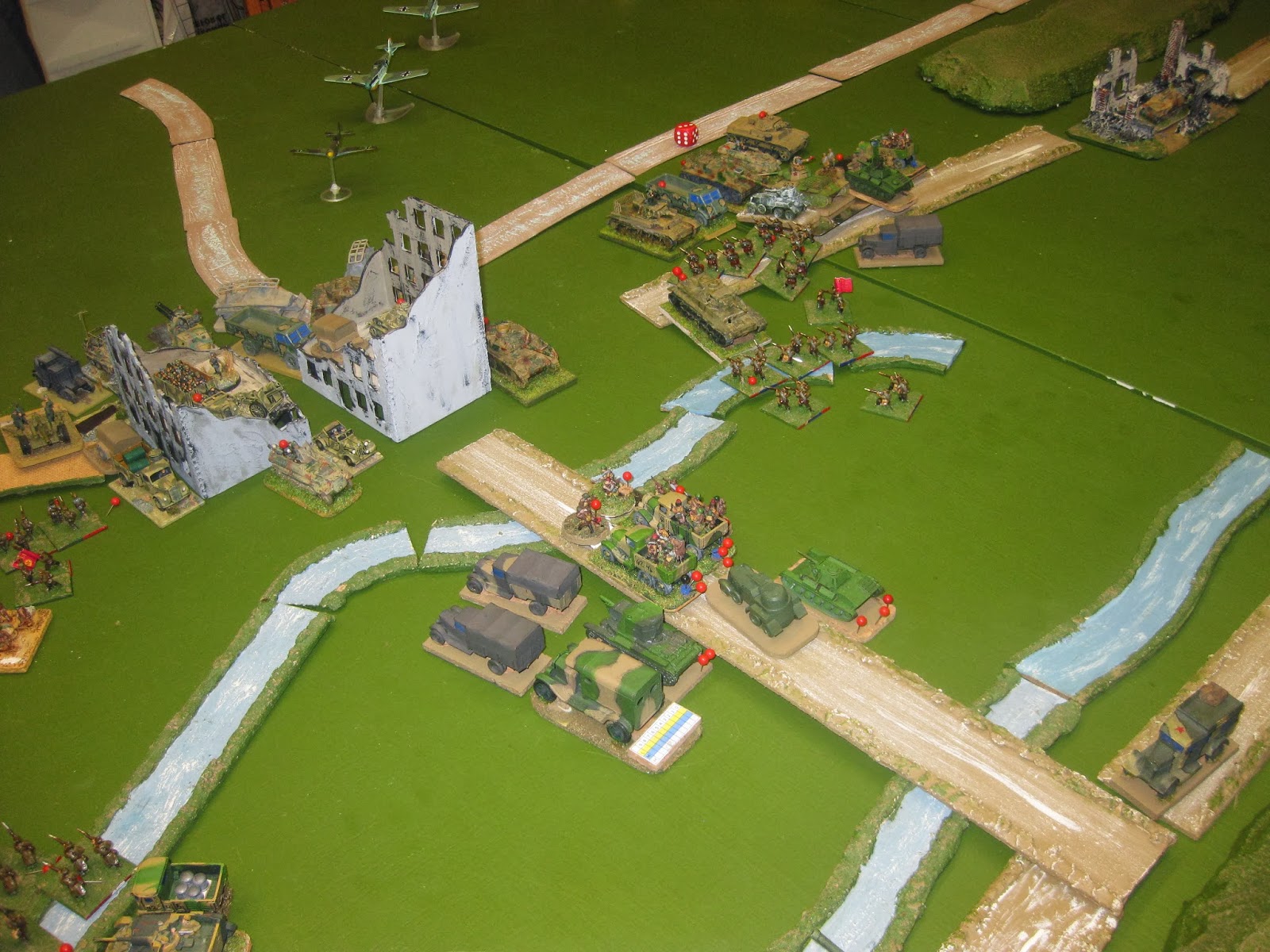 The stukas start to bomb Kharkov, and the SS press on into the outskirts. The fight is very brief, and the Guards, or what is left of them, are soon back across the river. 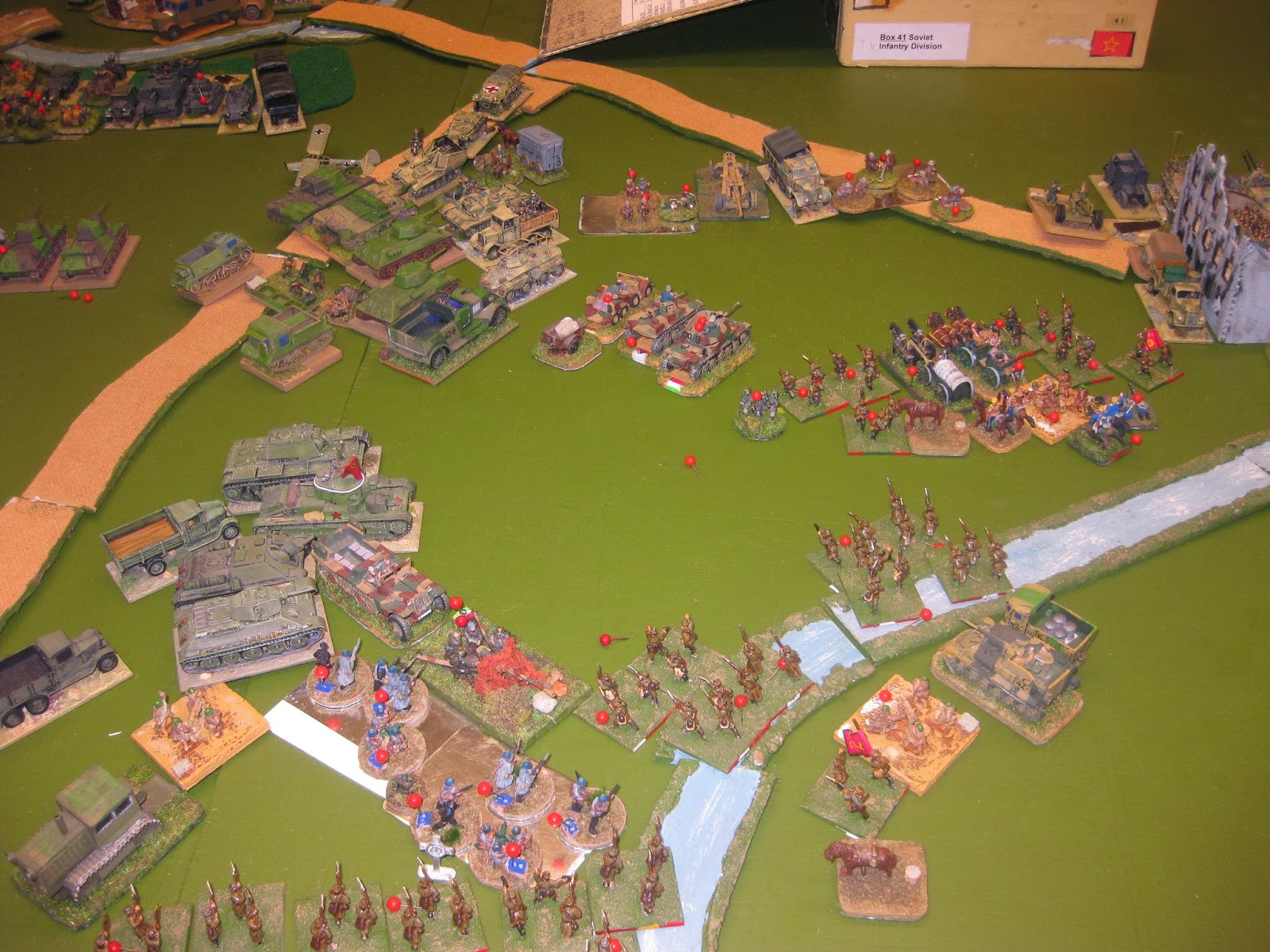 The German river line has finally collapsed...but probably too late... 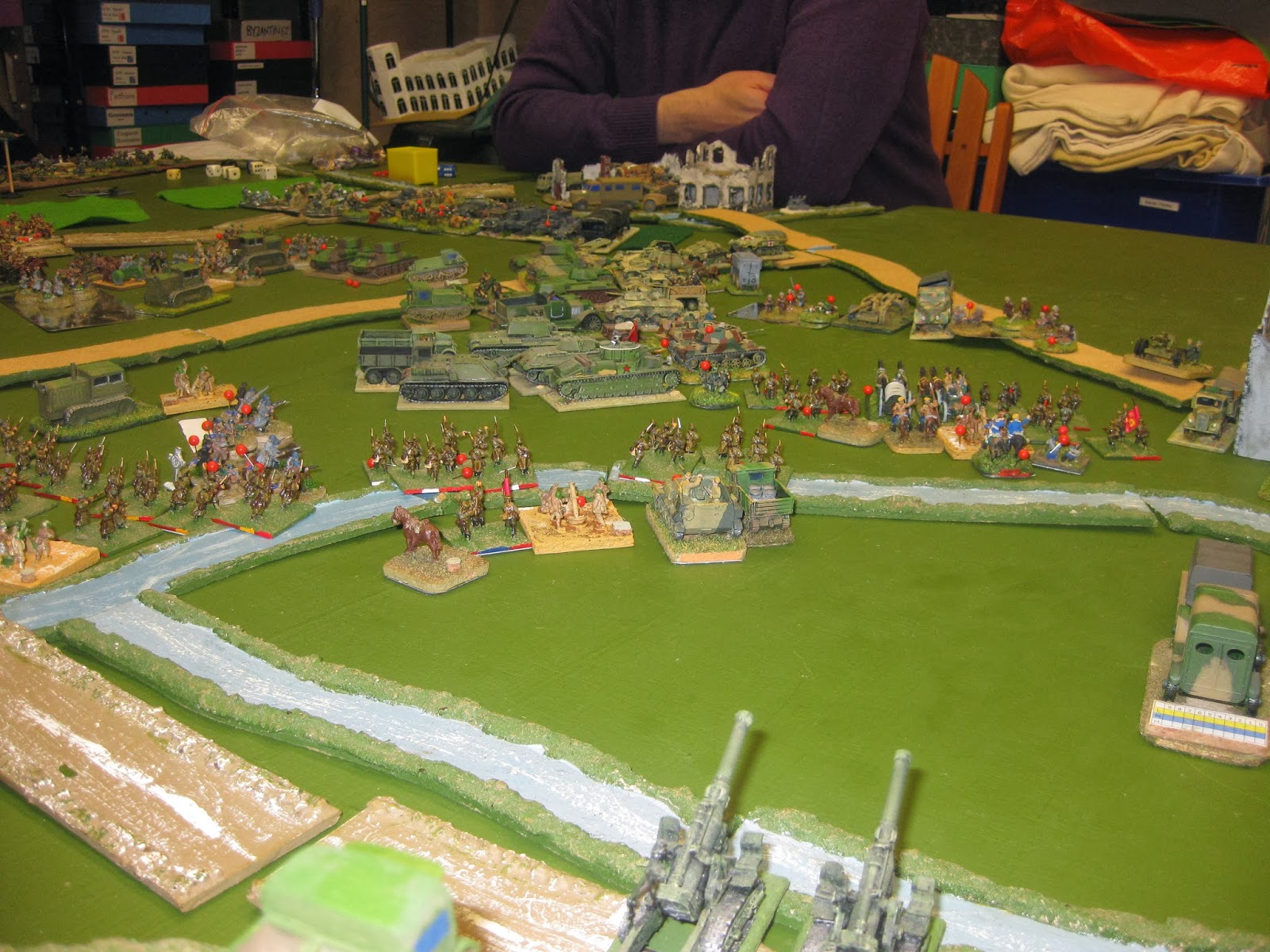 The Russian armour drives on, colliding with the Germans rushing to Kharkov. In the background comrade Will is steadily pushing the Germans back into Dnepipetovsk. Which is a shame, as it's our other objective. 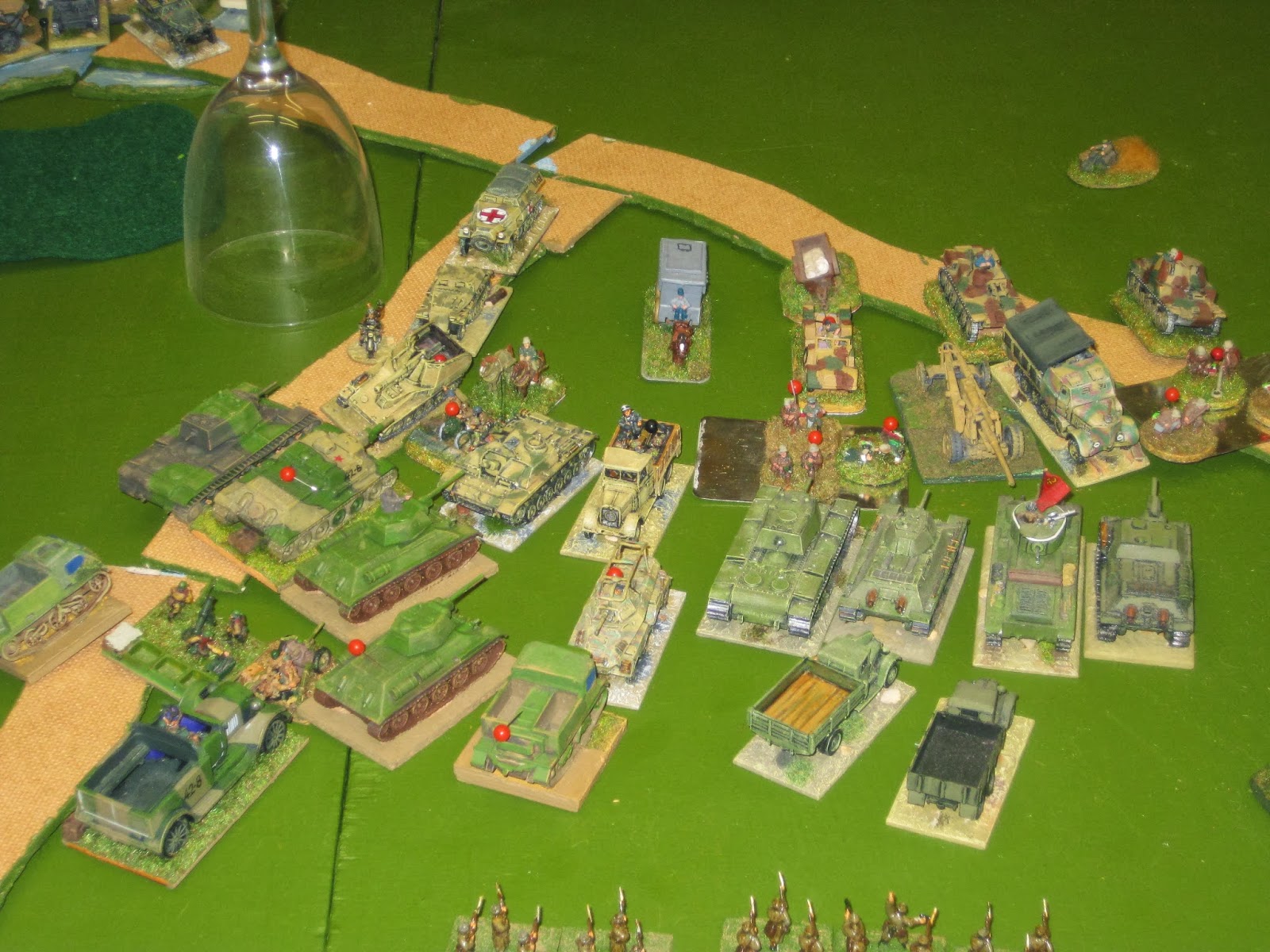 The armour fight in the middle shapes up nicely, - from a Russian perspective. 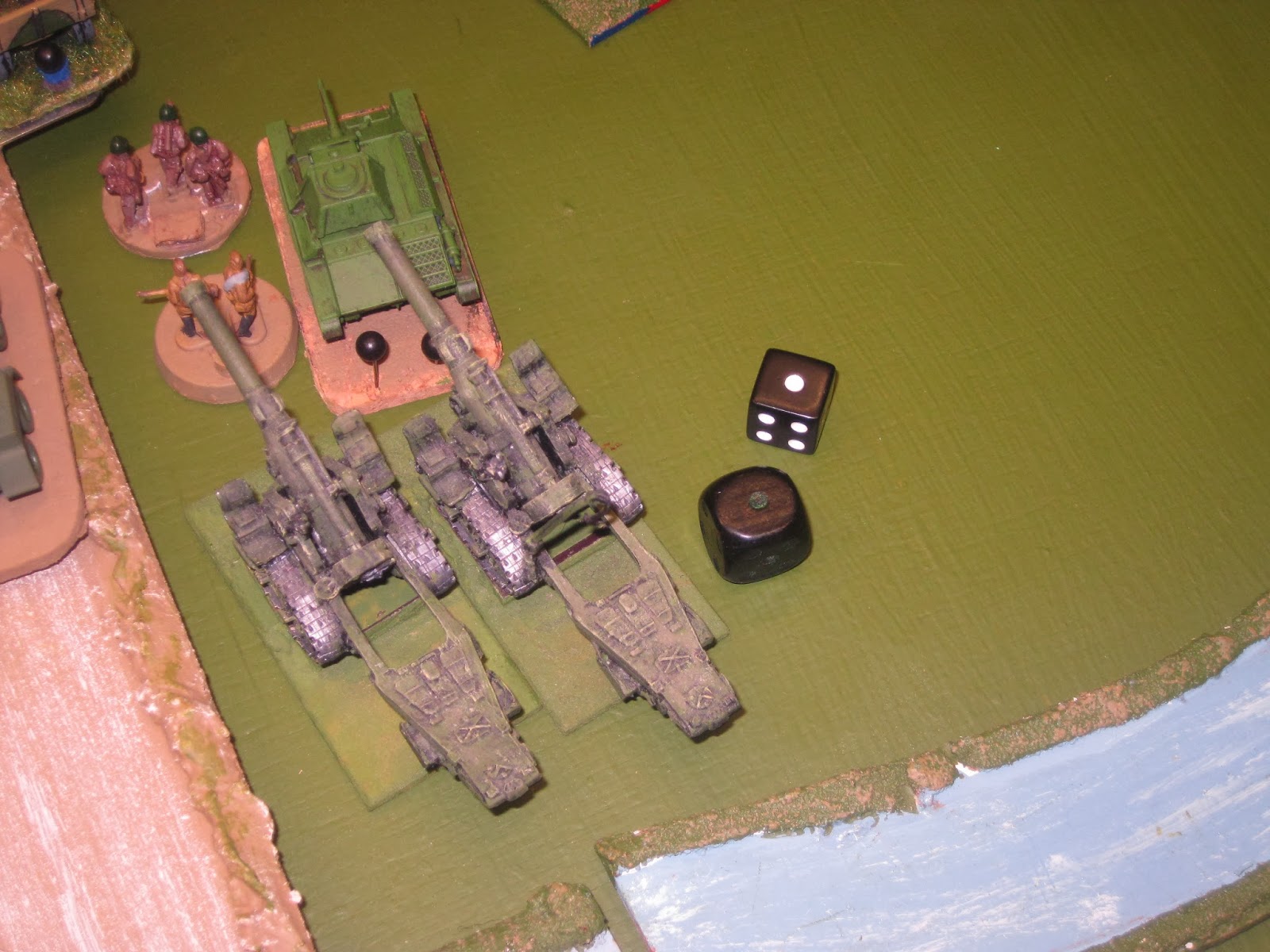 The Russian breakthrough artillery is finally deployed to shell Kharkov. After waiting nearly the length of two evenings it rolls a double one. Spectacular. 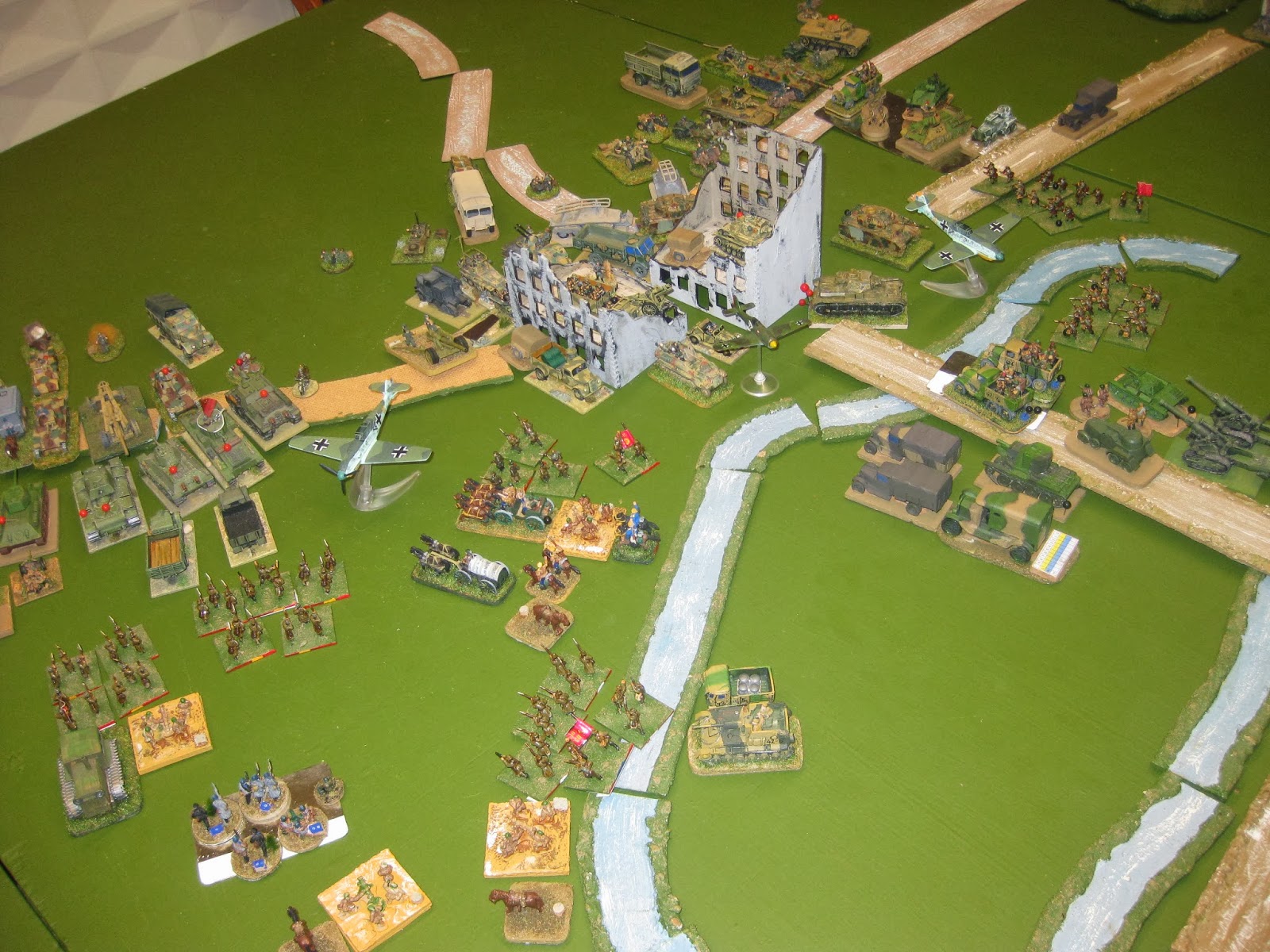 The encirclement of the Germans in Kharkov is well under way now. The battle of the Kharkov Kessel will dominate the winter months. 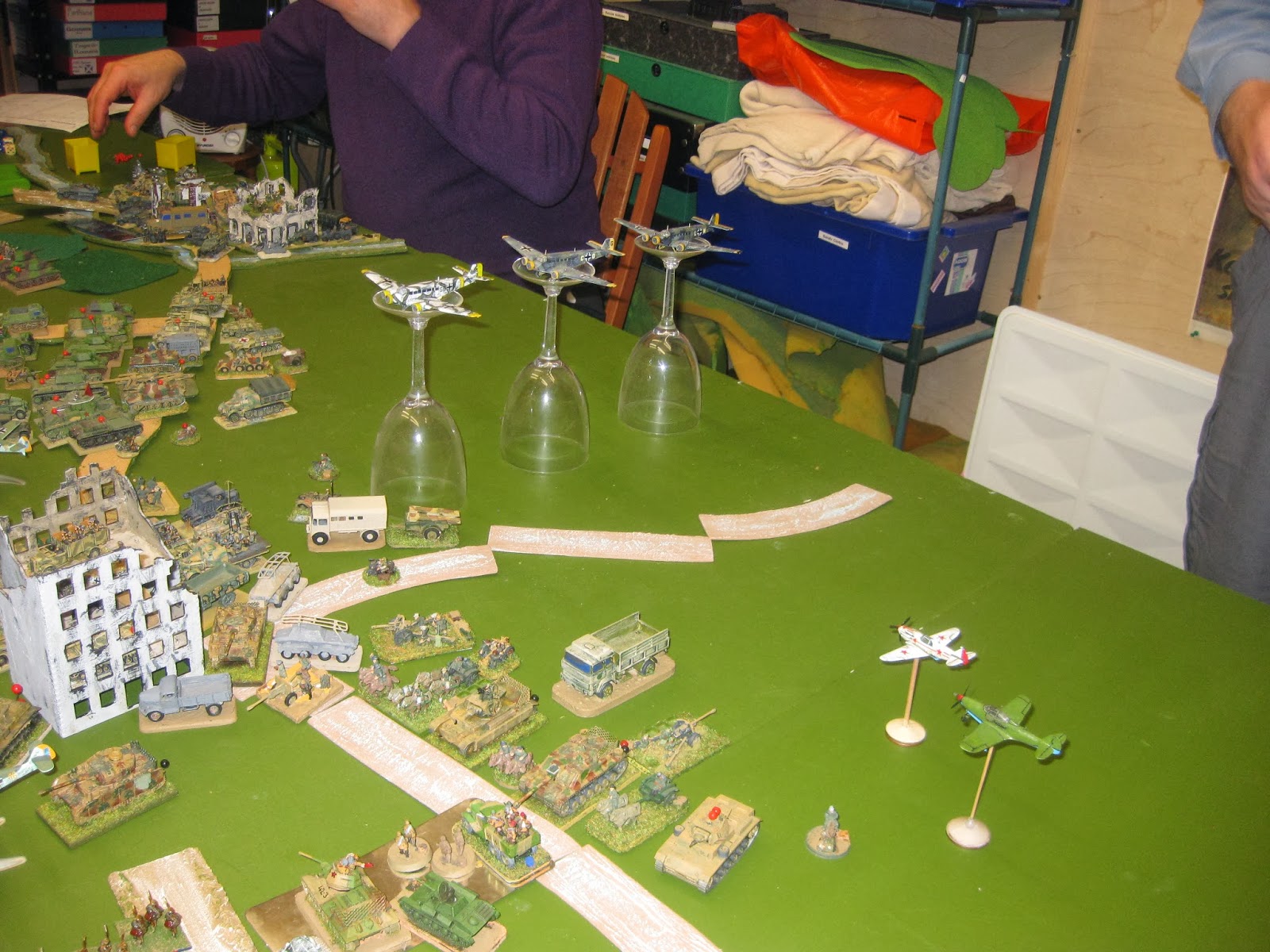 Final shot, - Phil had brought his JU52s along for just this eventuality. He believes he can hold Kharkov with air supply....

We didn't really play to a full conclusion. Another evening might have given us enough, but it wasn't clear. This is the first time in 20 years that the Russians have put sizable amounts of armour on the table. Long may it continue. Alas, our use of it proved ineffective in certain areas, and the Germans always seem to be one step ahead of us. However, comrade Stalin assures us victory is close at hand.
Posted by Trebian at 12:39