In the end there were three of us, not two, and as we ended up playing to midnight Shedquarters was the best place for us, rather than keeping Mrs T awake with our raucous fun.

The armies in play were Phil's Arab nomads & Auximites (army lists for pre-Islamic Arabs & Abbyssinians).The other participant was Chris K.

This blog is a bit rambling. We played three games between us, and although I took pictures I have no clear narrative. Phil wanted to try the armies prior to taking them as a pair to a DBA tournament. The question was whether they were interesting and balanced. 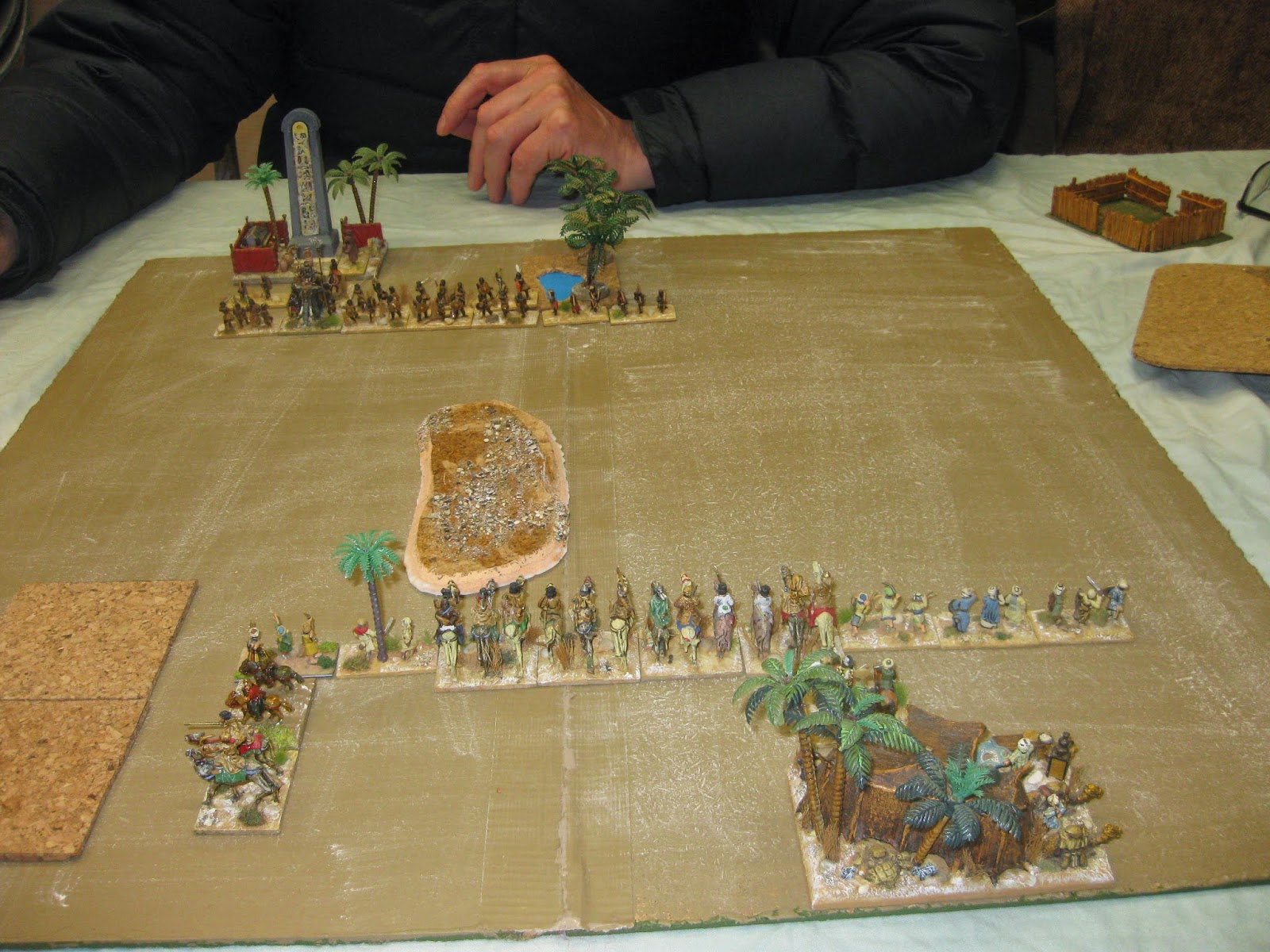 In the first game I took the Arabs & Chris K the Auximites, with their elephant. The Arabs have mostly camels. The Auximites have mostly warband. They are odd armies stuffed with troop types that aren't in my comfort zone at all. 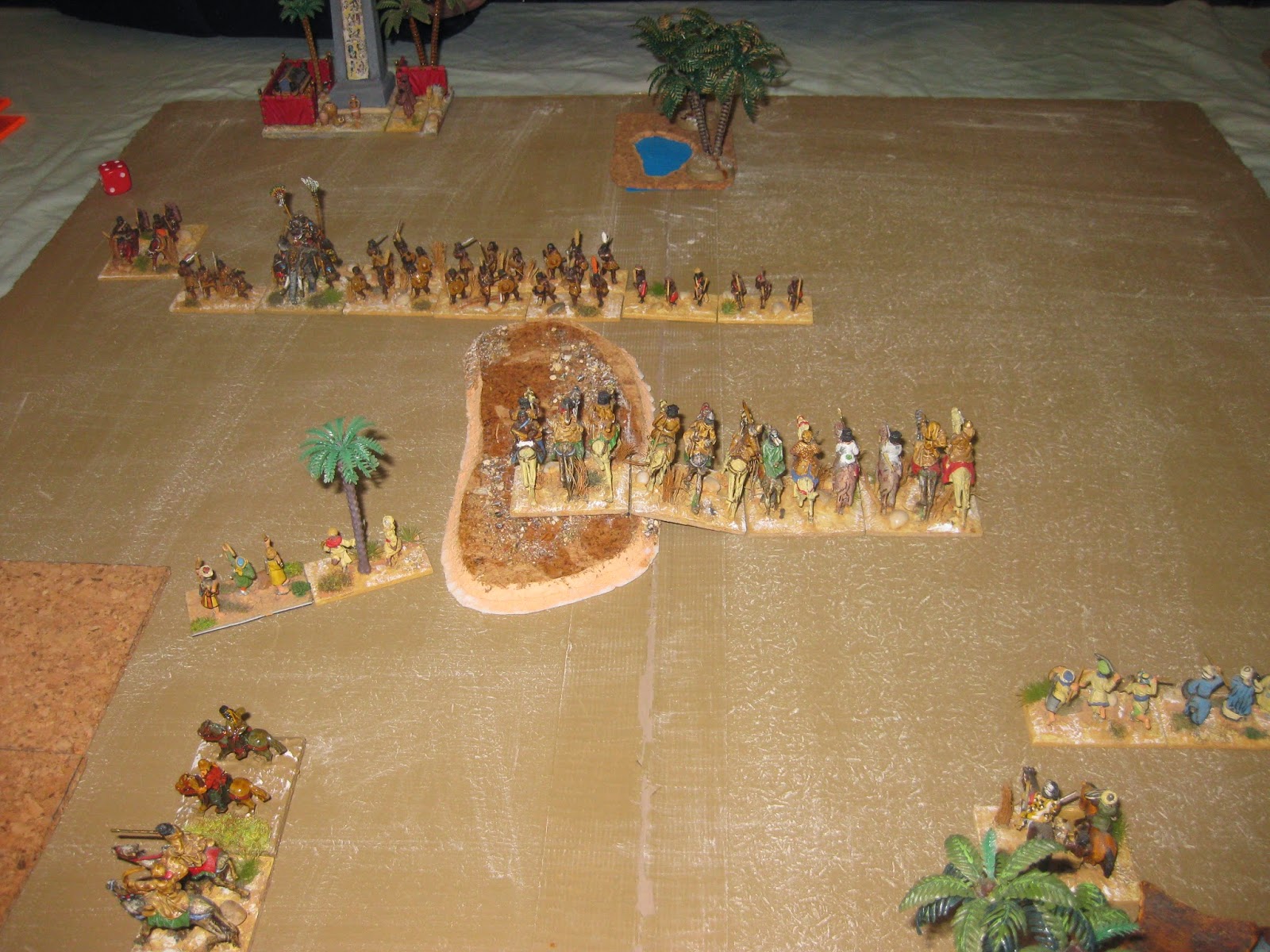 I lost the first die roll and ended up as the defender (the Arabs defended all evening). Chris also got his favoured starting edge, so the terrain was of little help to me. I also had a PIP nightmare, rolling 1s & 2s for the first 6 or 7 moves.

This meant I never developed the middle of the board, and my blades just never moved. I then cocked up my left hand blocking force, which got defeated in detail, and cost me the game.

Second game I kept the same army and played Phil. Same story on starting edge as before. 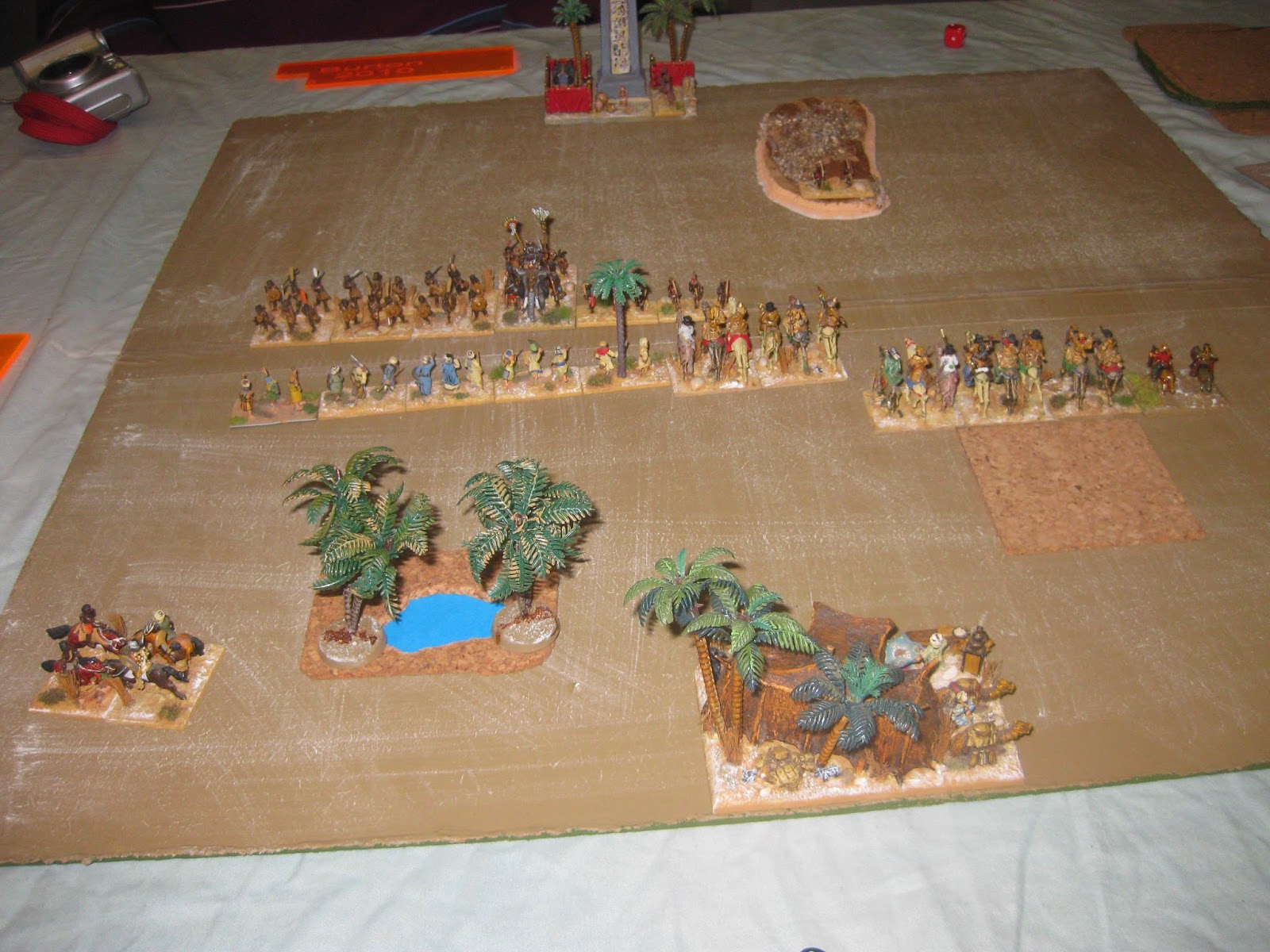 A bit more luck with PIPs meant I was able to get across the board and line up more or less as I wanted. Alas I had to use my general to hold off Phil's light horse from giving me grief, which hamstrung my movement a bit as he was out on a limb, over 12 inches away from some of my troops.. 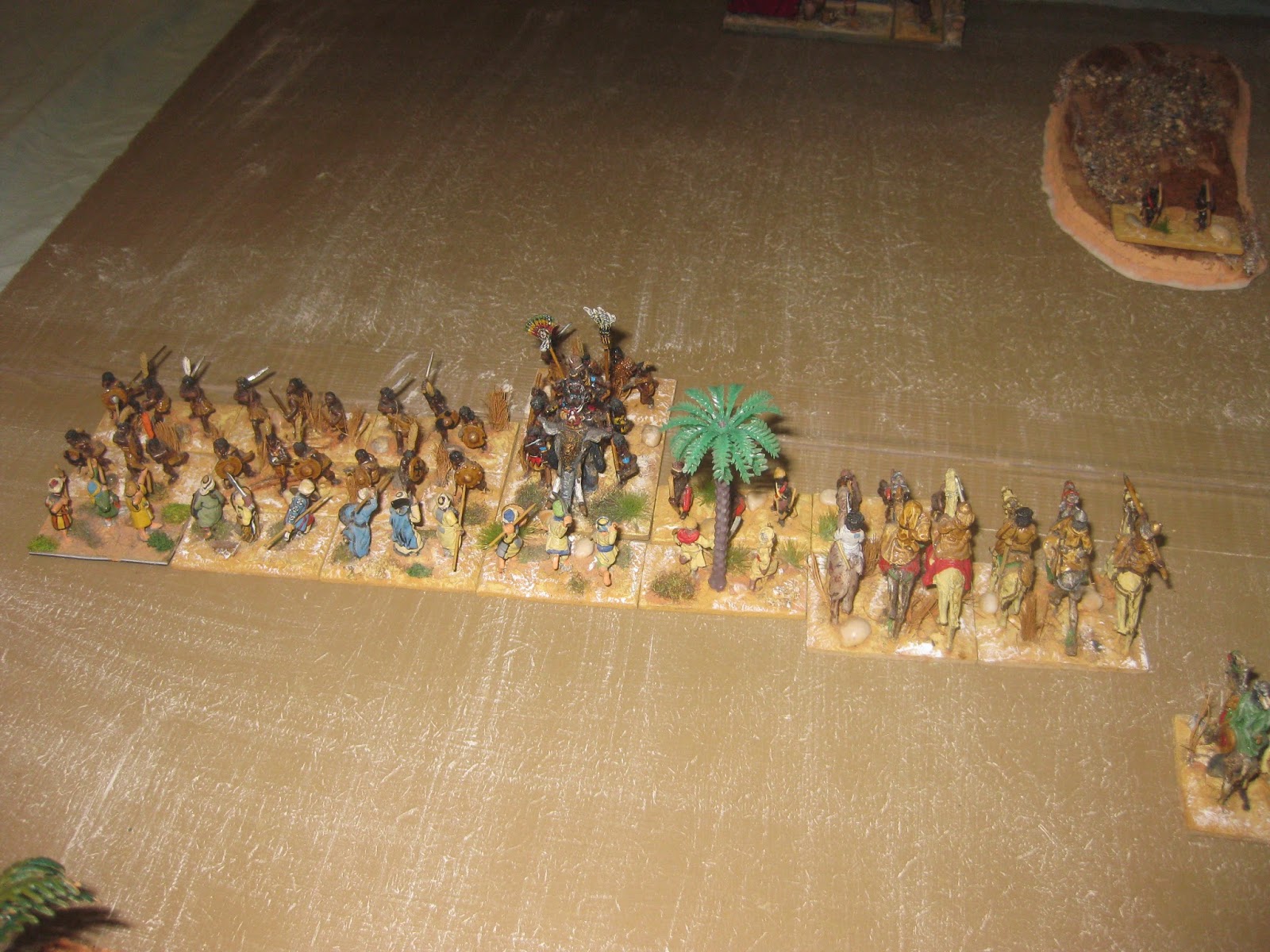 Soon the battleline clashed, and I lost every match up, including three blades v warbands. My General even got killed on a 6:1 roll against Light Horse I had pinned up against the table edge. 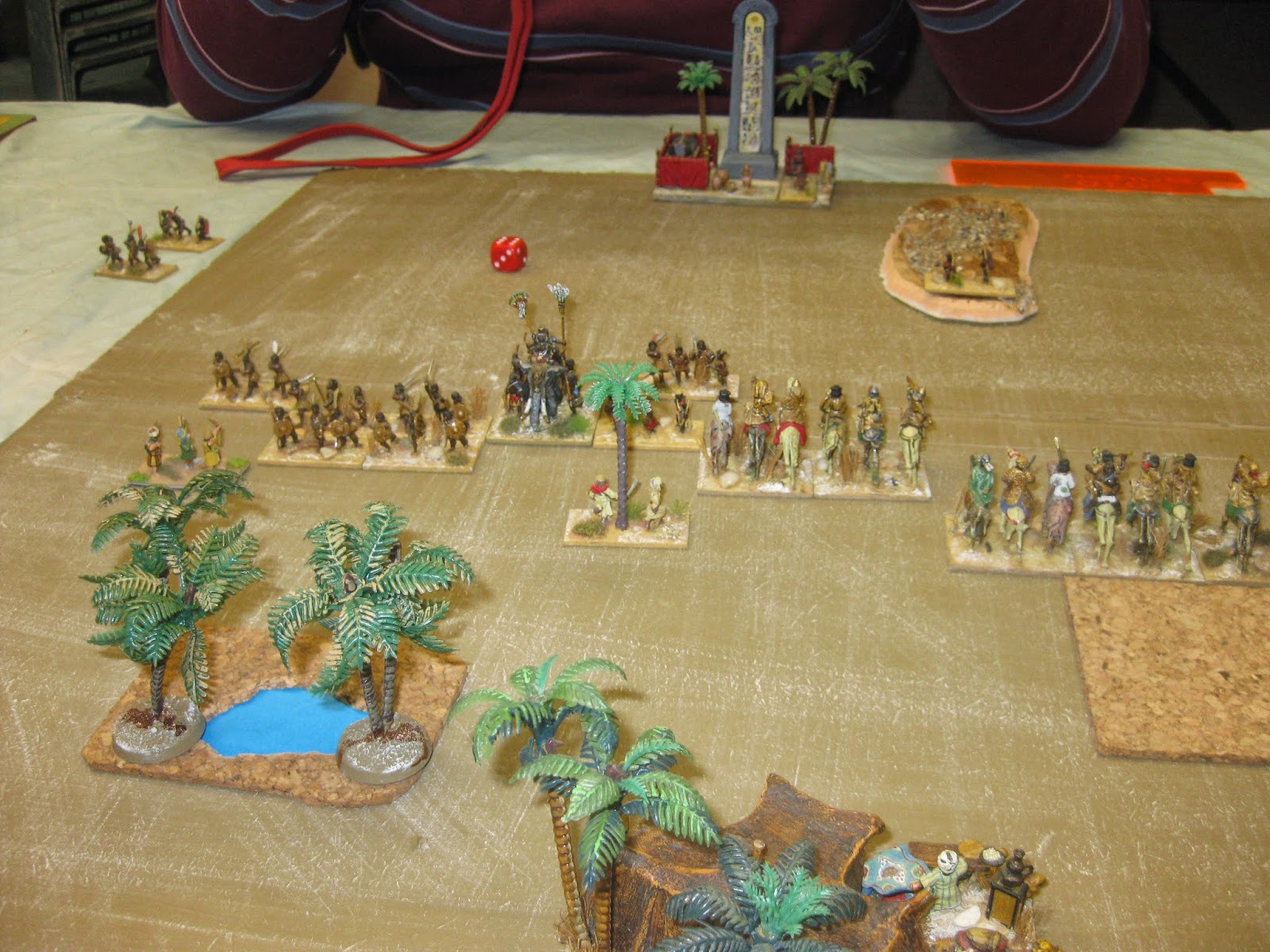 So that's how it ended.

Last game Phil & I swapped sides. I attacked, but didn't get my favoured table edge. 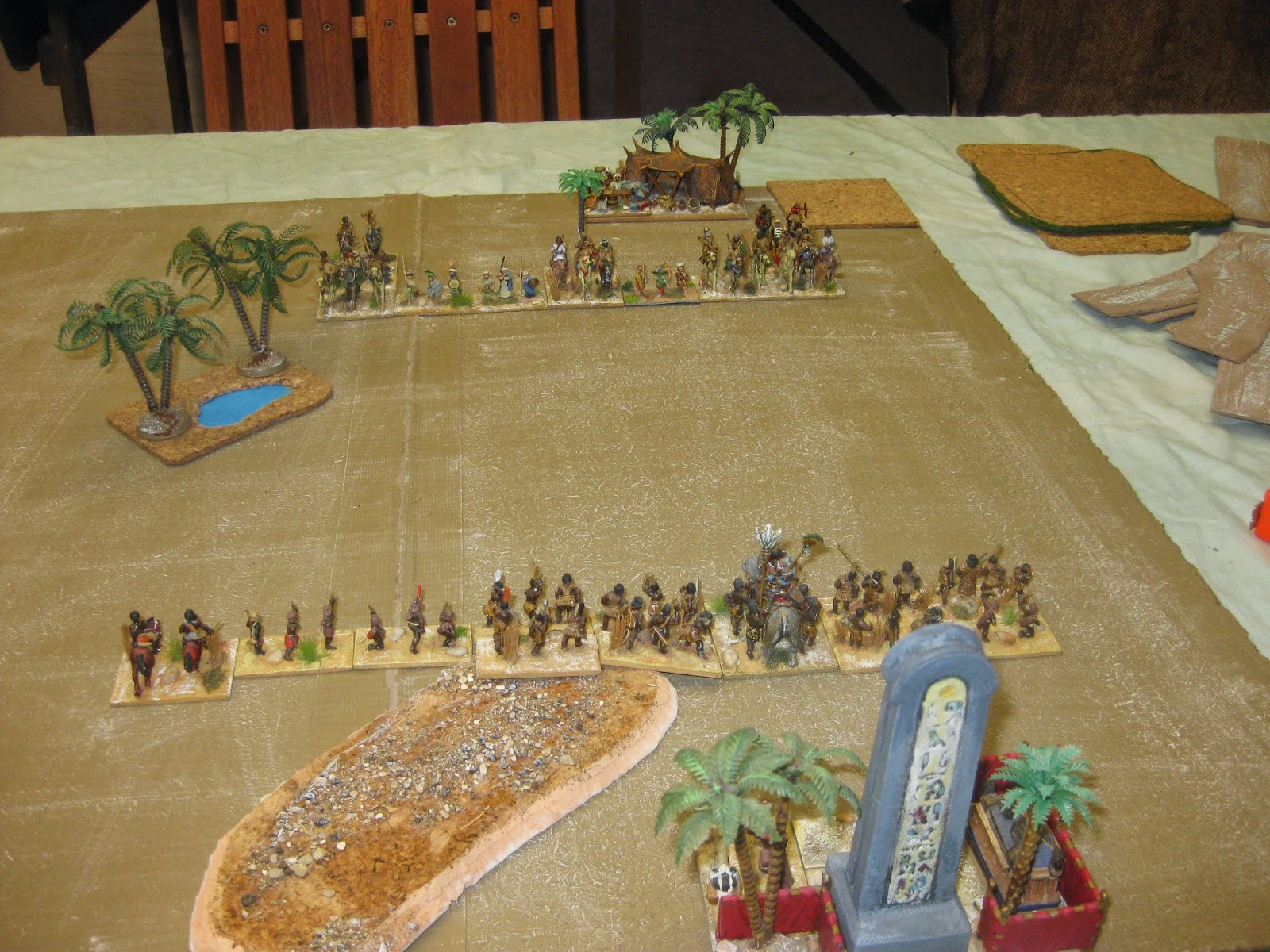 We lined up opposite each other. Phil & I are both fairly gung-ho players, so we both gunged & hoed at each other. 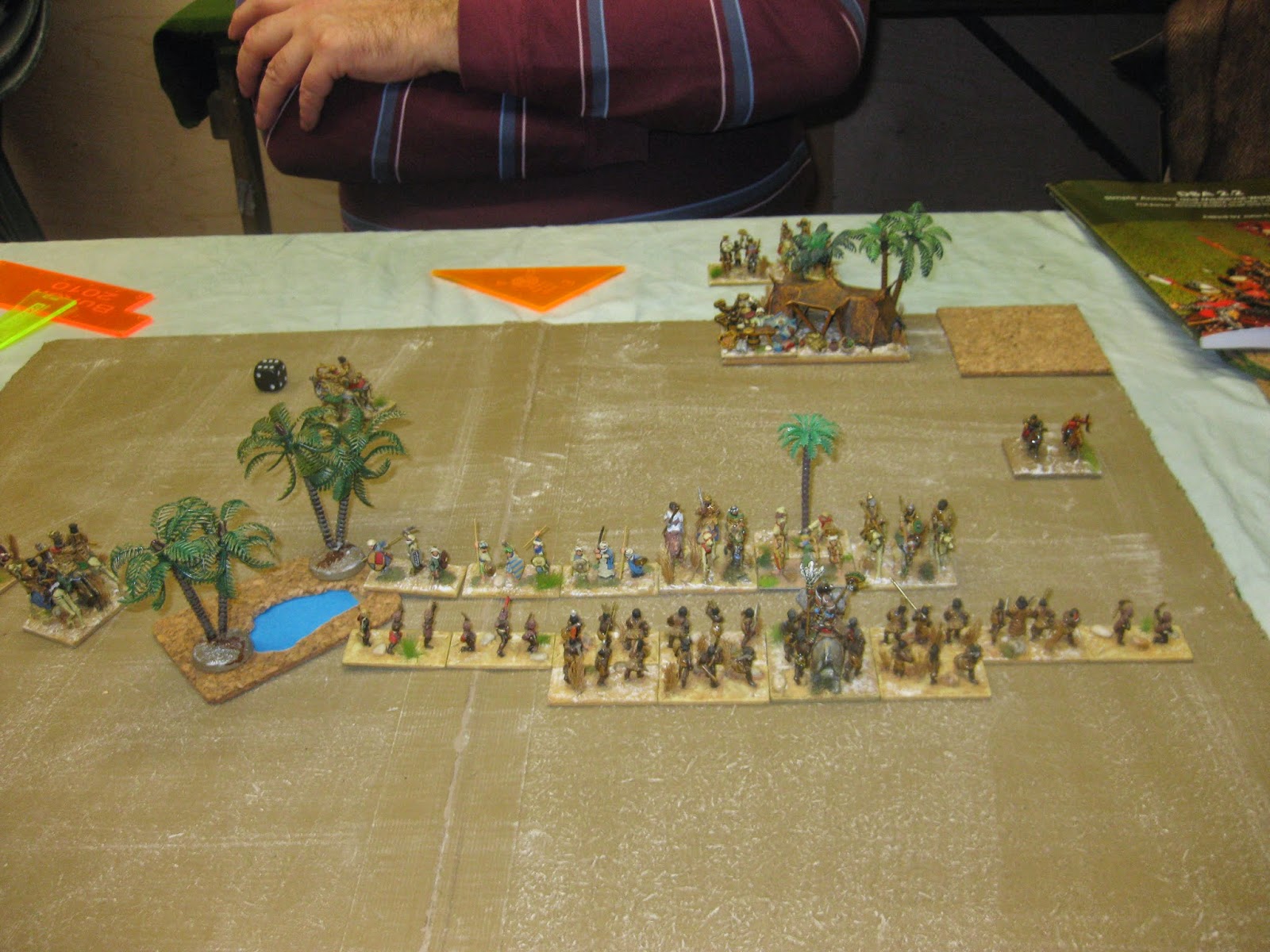 Over on the left you can see light horse jousting round each other. In the middle I'm in good shape, lined up as I want except Phil's got his psiloi in front of my Elephant general. Phil, being Phil, was looking at doing something clever on the right hand end of my line with his light horse general. 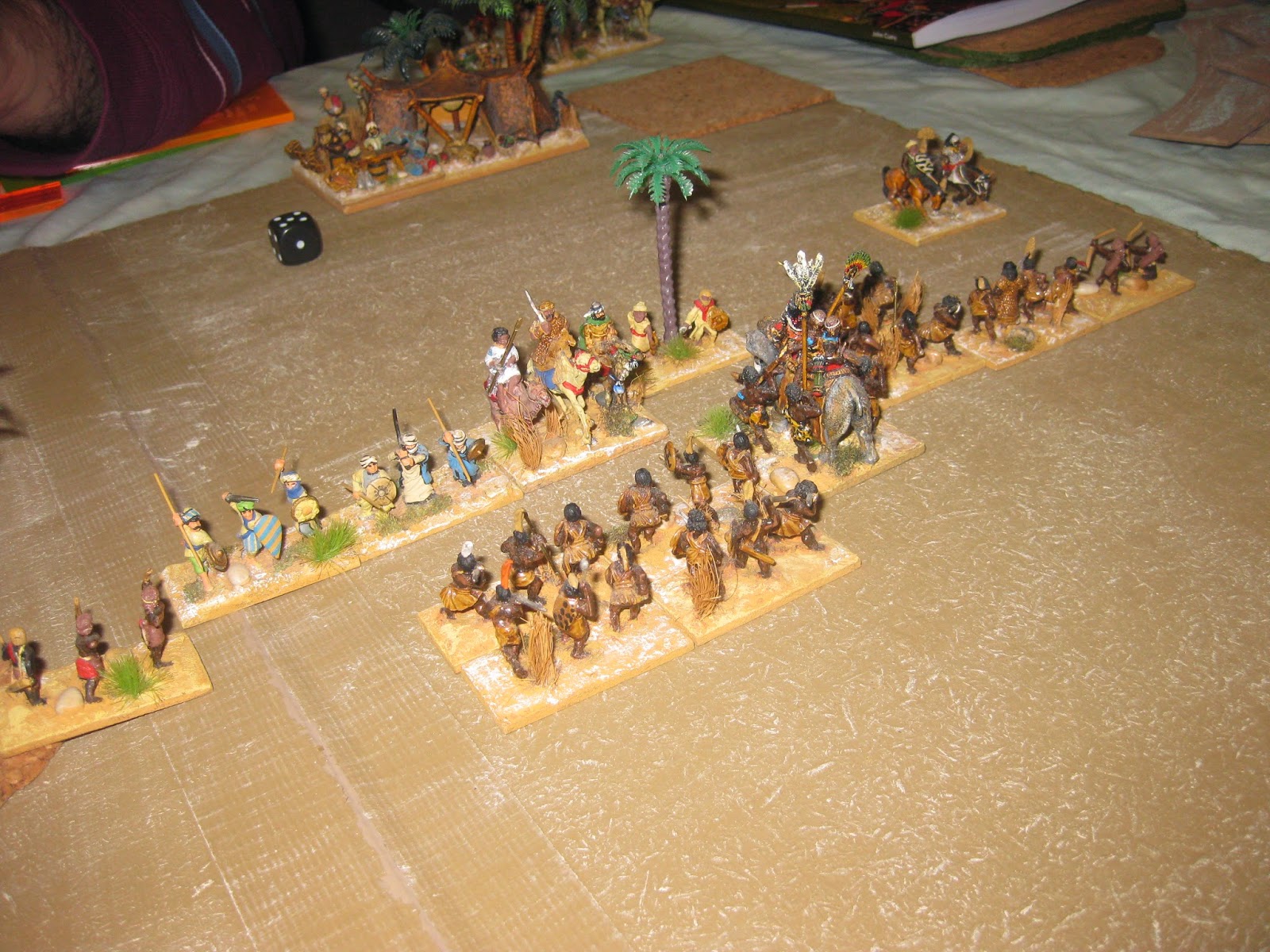 As it turned out, the general was immediately killed, ending the game after about three turns. So we swapped him over for his other light horse and started again from the same position. 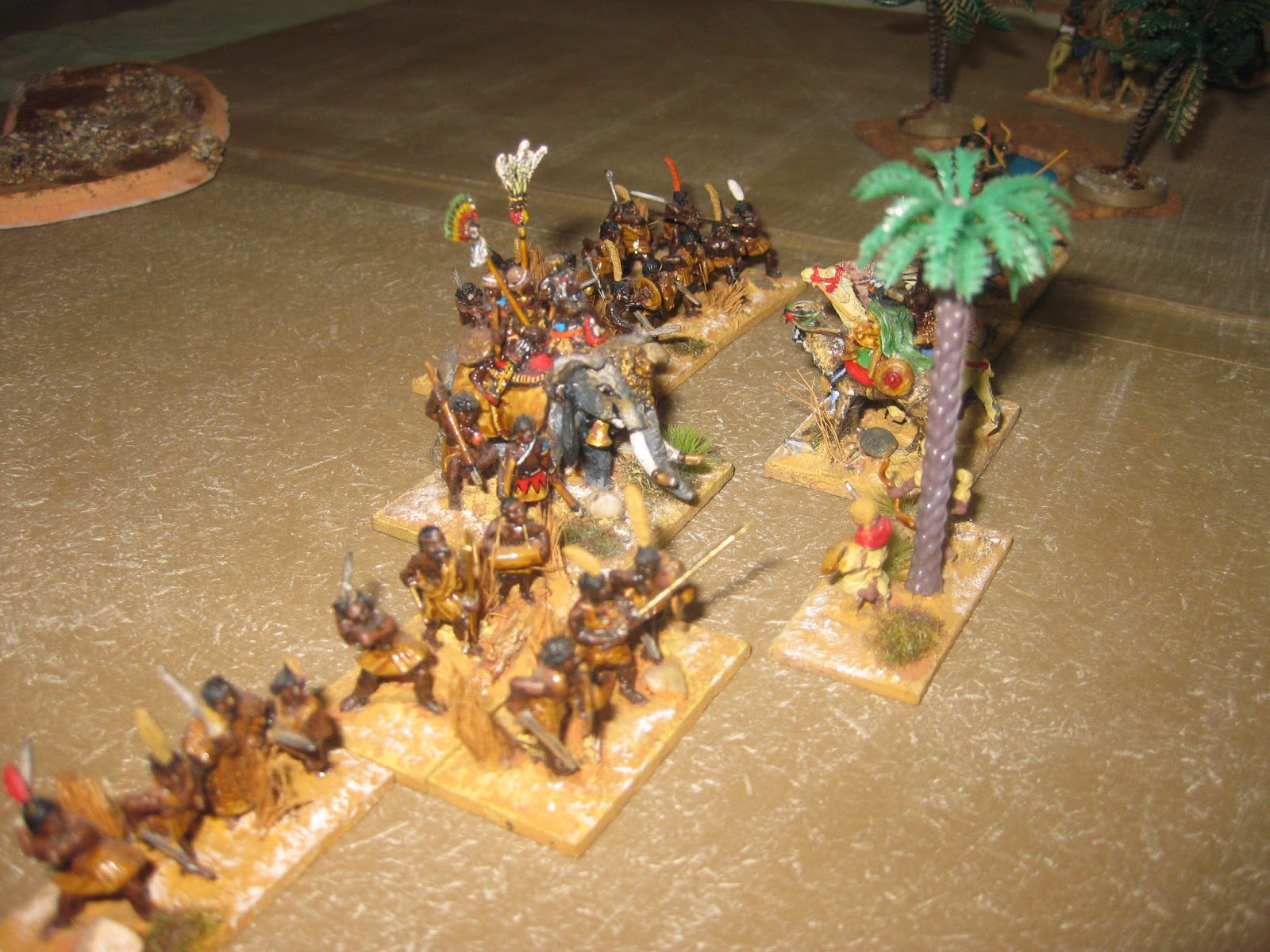 It availed Phil very little. When we got to grips I won all along the line and killed loads of stuff. Another warband triumph.

Three games, three Auximite wins. Doesn't look awfully balanced. Having said that Chris K & I are not good DBA players at all, dabbling very infrequently. This magnifies the effect of any luck in our games.

The armies are probably closer than 3-0 on the night would indicate, and they are certainly a bit different from the usual fare. However, I think I may have seen enough of them.

As I said, just enough kill for the evening. Unless you are a nomadic arab.
Posted by Trebian at 13:57