So we had another game of Square Bashing on Wednesday evening.We had two players (Phil & Richard) and a bit of a rushed start due to me being delayed for an hour on the M6.

The game wasn't a rip-roaring success. This was a disappointment as I had high hopes following the initial scenario based game. Why? Well.....my conclusions are at the end of the report.

We played the trench based game using the quick start system in mid 1916. That meant mixed quality Brits and no tanks. The quick start game also means that neither side gets to use off table assets and there are no reinforcements. 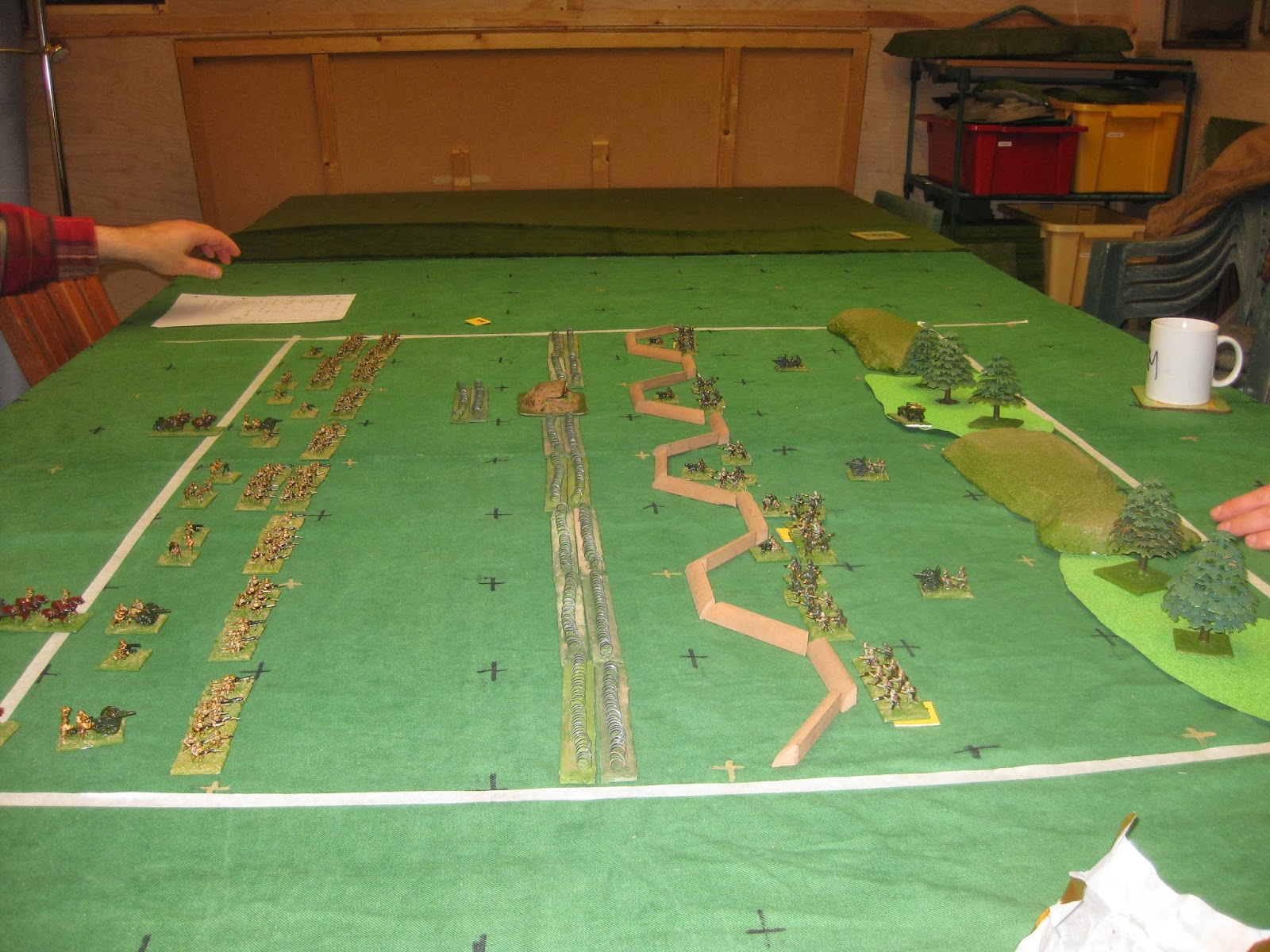 This is the table set up, with Phil's attacking Brits to the left, and Richard with the Germans defending to the right. For a trench line attack the rules require the trench to be a single line with "rough ground" in front of it and all the terrain off to the side. You have a bunker just in front of the line as well.

The Brits set up first, then the Germans. You then run the "depletions" on the defenders to simulate the effect of the preparatory barrage. Then the attackers try to set off the mine. 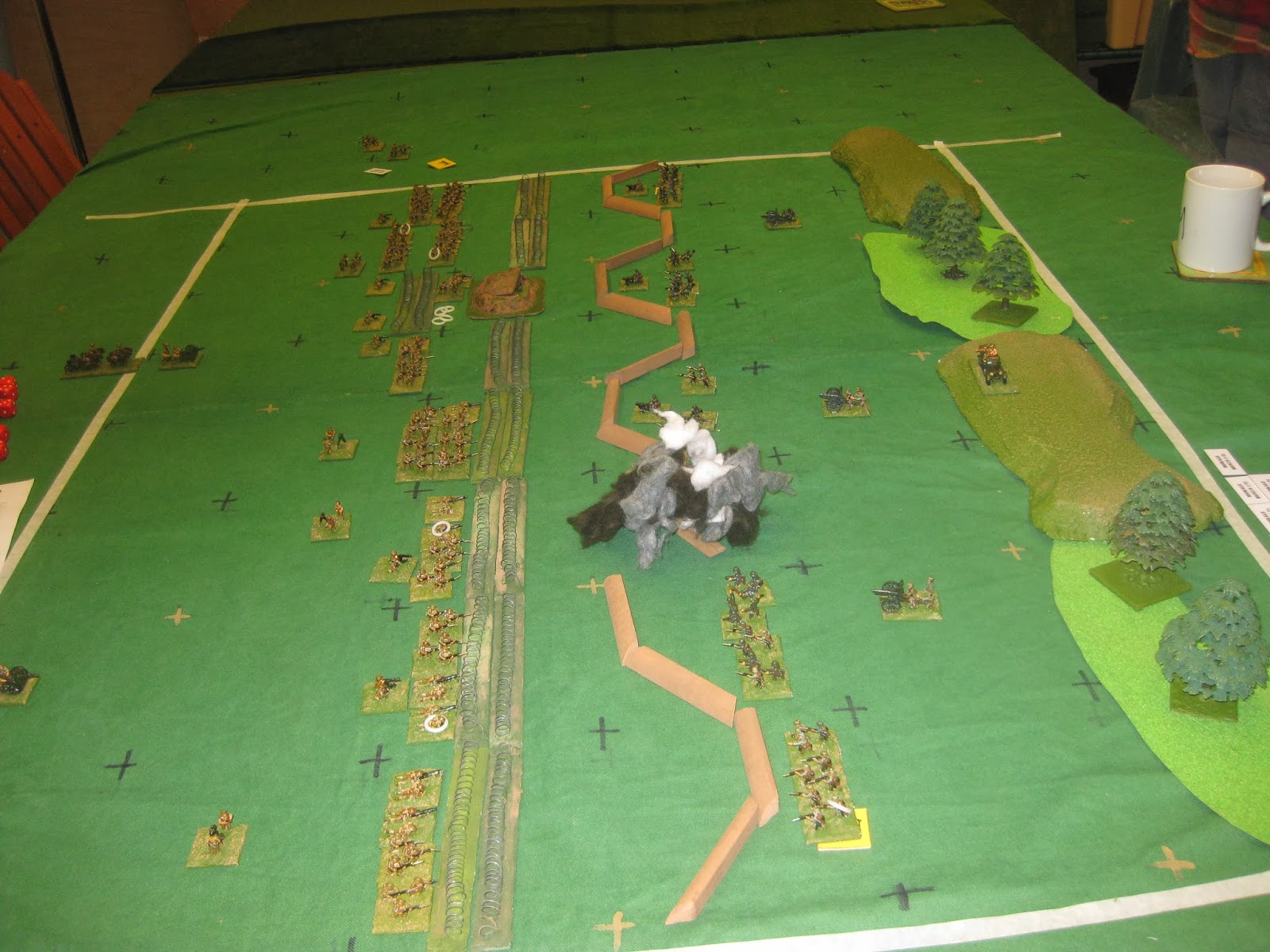 In this game I forgot the mine until the end of turn one. Whilst it went off with spectacular effect, it took away an objective. If Phil had known about it before his set up he might have deployed differently as well. 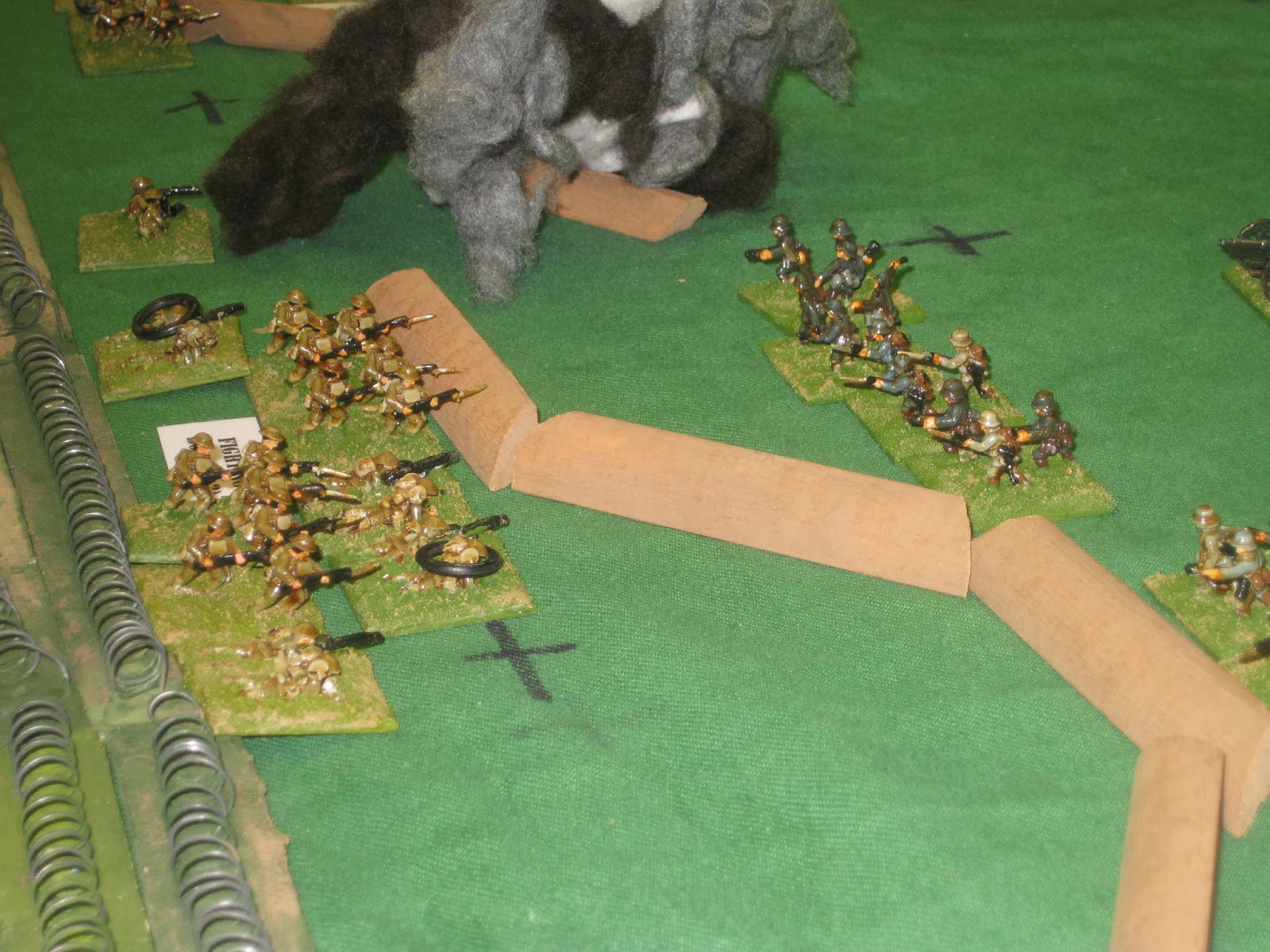 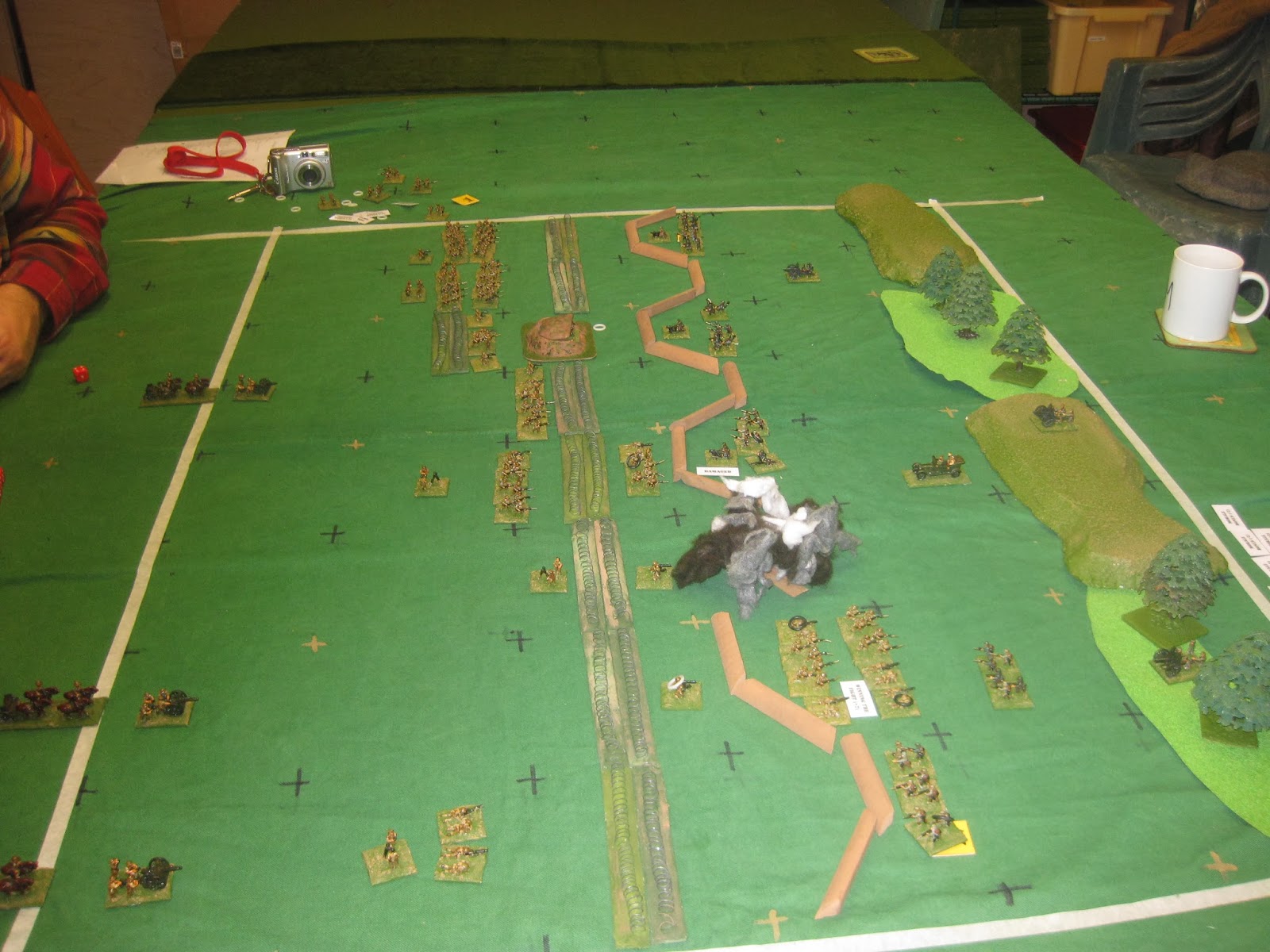 Further up the line the first of many attacks went in on the bunker, defended by a lone MG company. The units at the top of the picture were reservists and in traditional RFCM fashion as the lowest quality units refused to do anything most of the time. 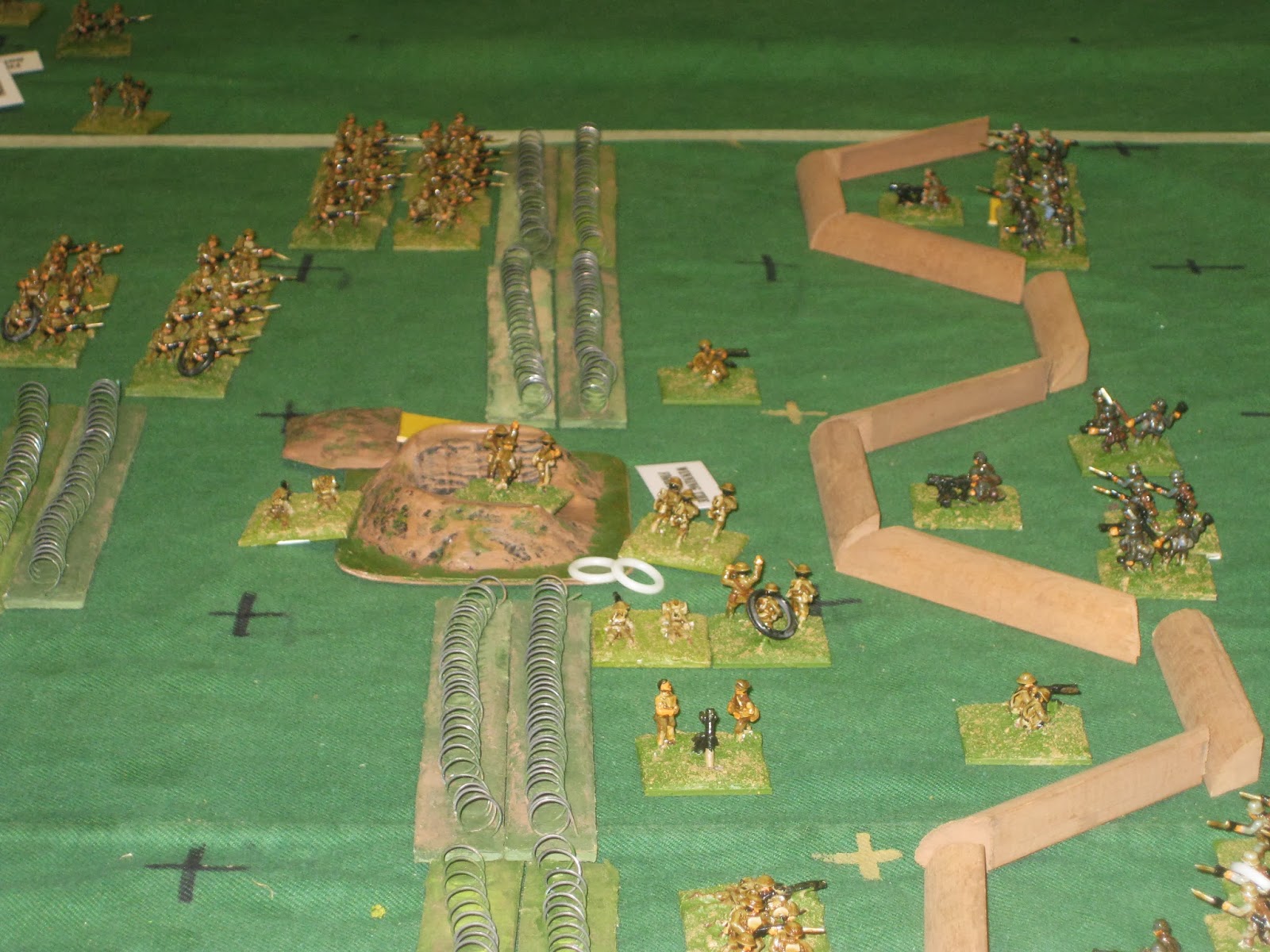 After some hard slogging Phil finally got across the wire and took the bunker from the side, whilst surrounding squares gave support. It was tough and go, and only won because the defenders were wiped out. He was still taking more casualties than he inflicted. Richard opted, as he did throughout the game, not to counter attack to recover squares he lost. I was ambivalent about this. He should probably have done so, but the consequences of losing would have been dire for him. 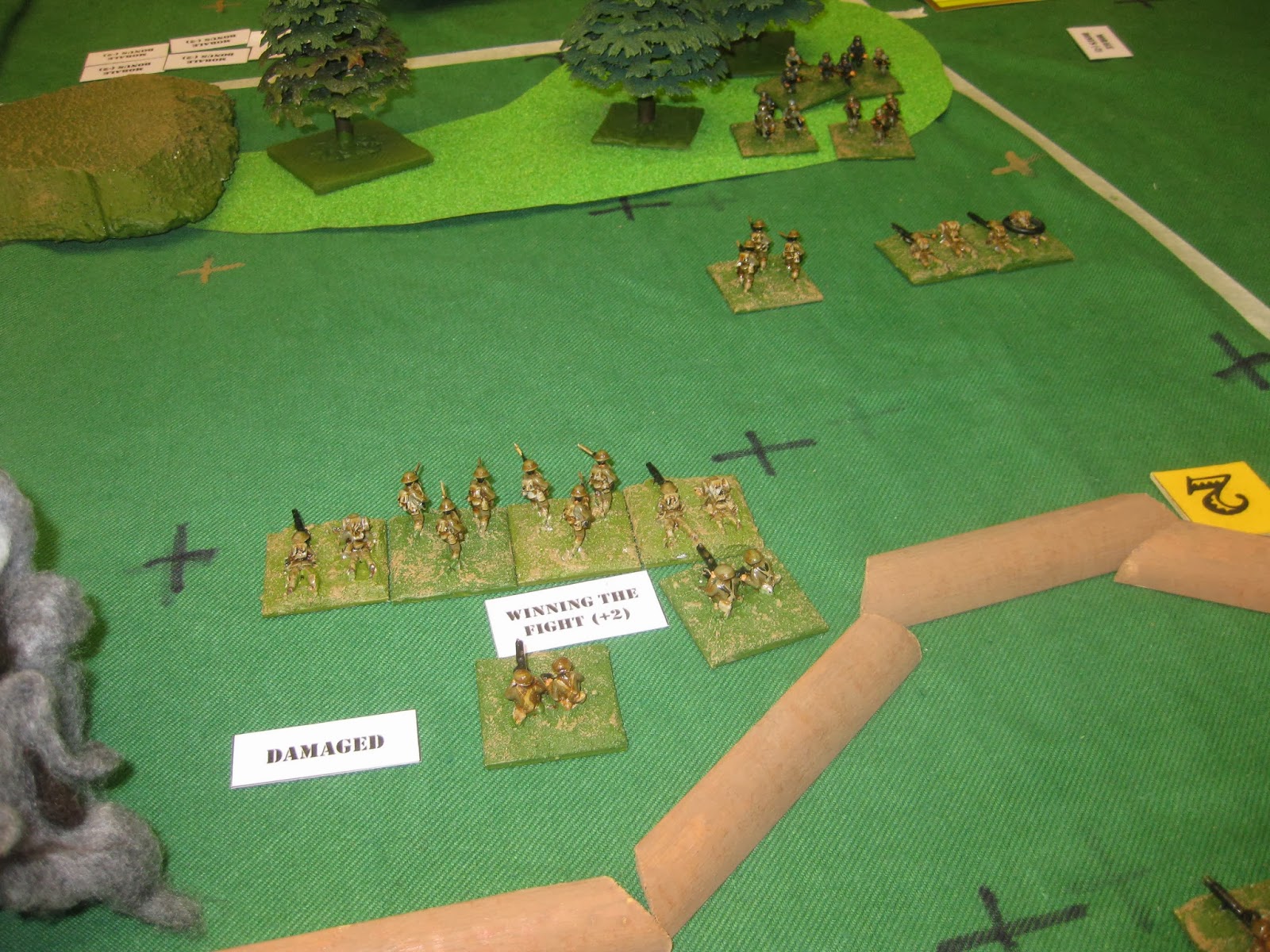 At the other end of the table the British finally broke the line and sent the defenders scurrying back towards their base line. Again flanking the trench and using other squares to support proved a winning combination. 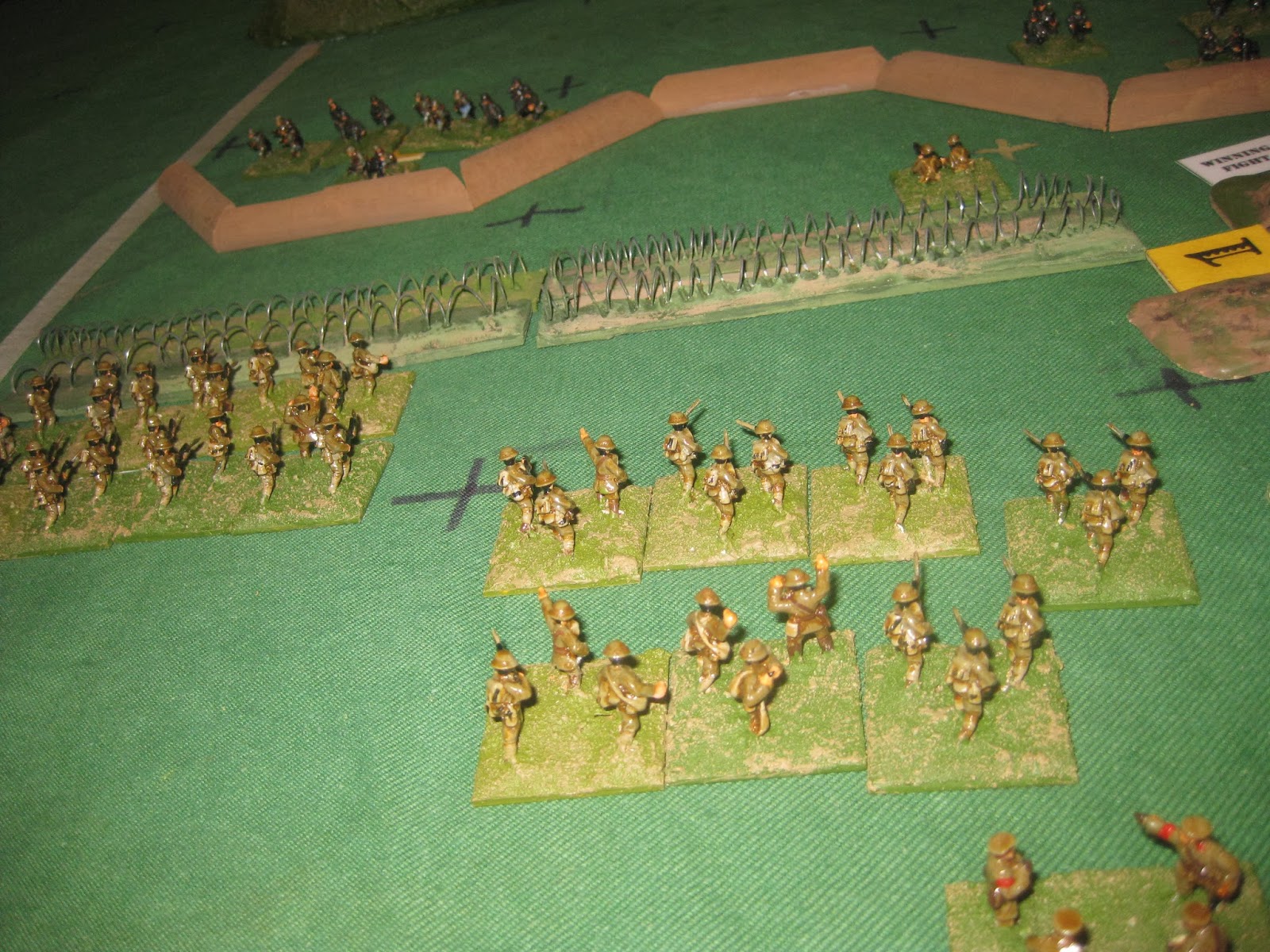 We ended with the British holding two objectives, the Germans one, with one destroyed. Casualties were fairly even but with the dice rolling involved in the victory conditions the Germans came out marginal winners.

So, my thoughts. It was a mistake to run the Quick Game with the Trench game. The trench game is a grinding match and without the assets or any tanks to help the attacks there's very little decision making and little to do other than just run forwards and hope for the best.

The rules have issues. The mechanism for moving out of difficult terrain is similar to other PPig rules and it doesn't ring true. There's a lot of dice rolled to little effect, and the saving rolls do not seem to even the luck out. Why do field guns have a range on the table of 1400 yards compared to normal ranges well in excess of that. Why are they on the table at all?

I don't think the game is broken, nor do I think the rules are awful. They are, as ever, poorly written and confusing. Some key rules are mentioned once, buried in paragraphs of text. Others are repeated many times with variations of wording and apparent contradictions.

I think I would like to use them again. I think scenario based games are a better option and army assets will add much flavour. As constructed the rules will work okay for later period armies with decent kit and troops. The earlier and mid war armies might not make for an exciting night's entertainment. Phil is not convinced and is not a fan. Richard didn't really offer an opinion.