Second play test, after the generally well received first run out. The scenario is not so important this time, as I needed to test the obvious matchups in the armies without too much interference from objectives and scenery. Even so, I put out a couple of villages to provide some focus to the game. Phil had a strong army with shielded infantry, some Royal Guards and two units of Battle carts. I had three units of massed Archery in my set up. 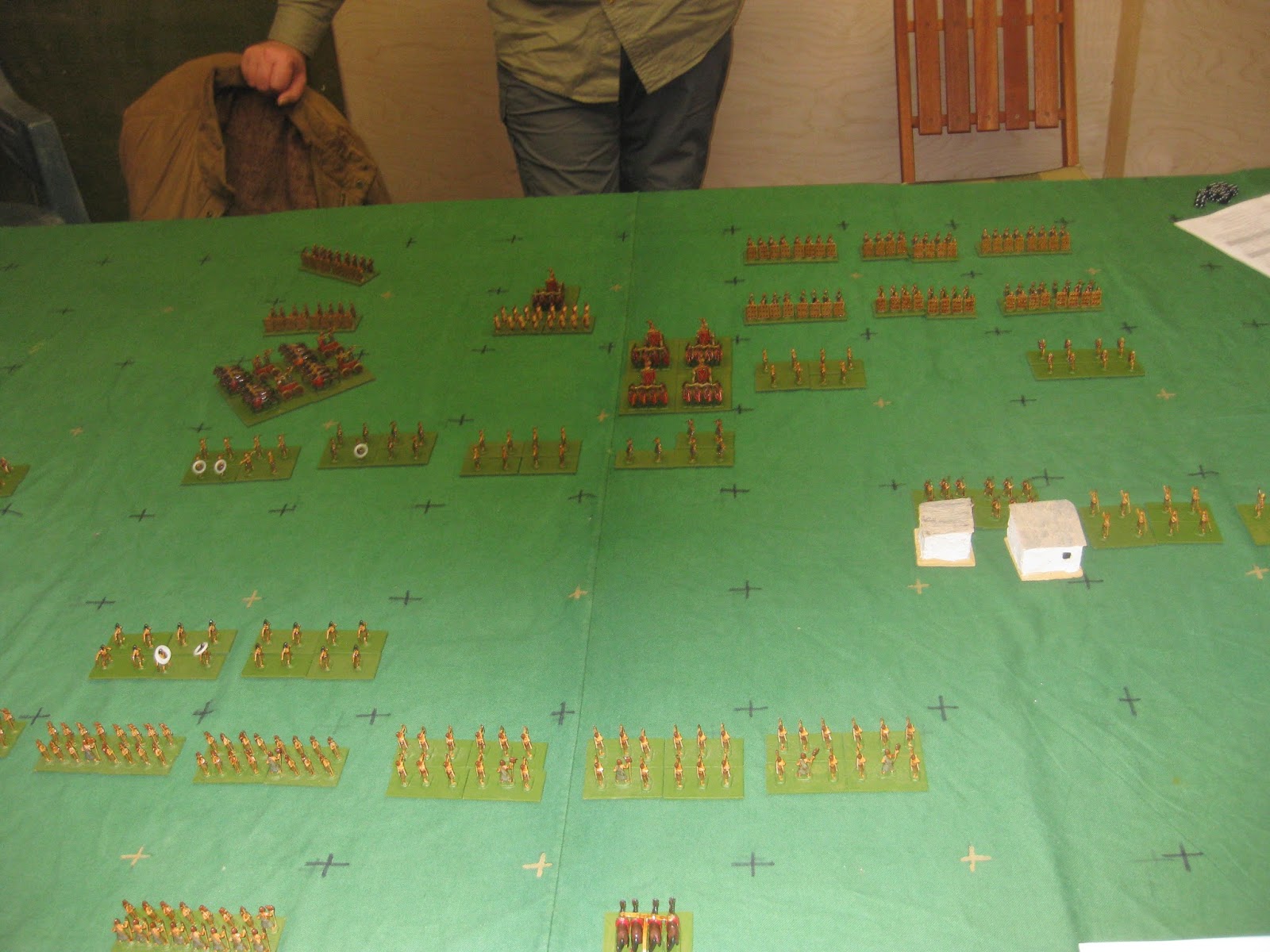 Phil looked to punch a hole in the middle of my line with one set of Battle Carts, and out flank my left with the other, whilst supporting to whole lot with a general infantry advance. 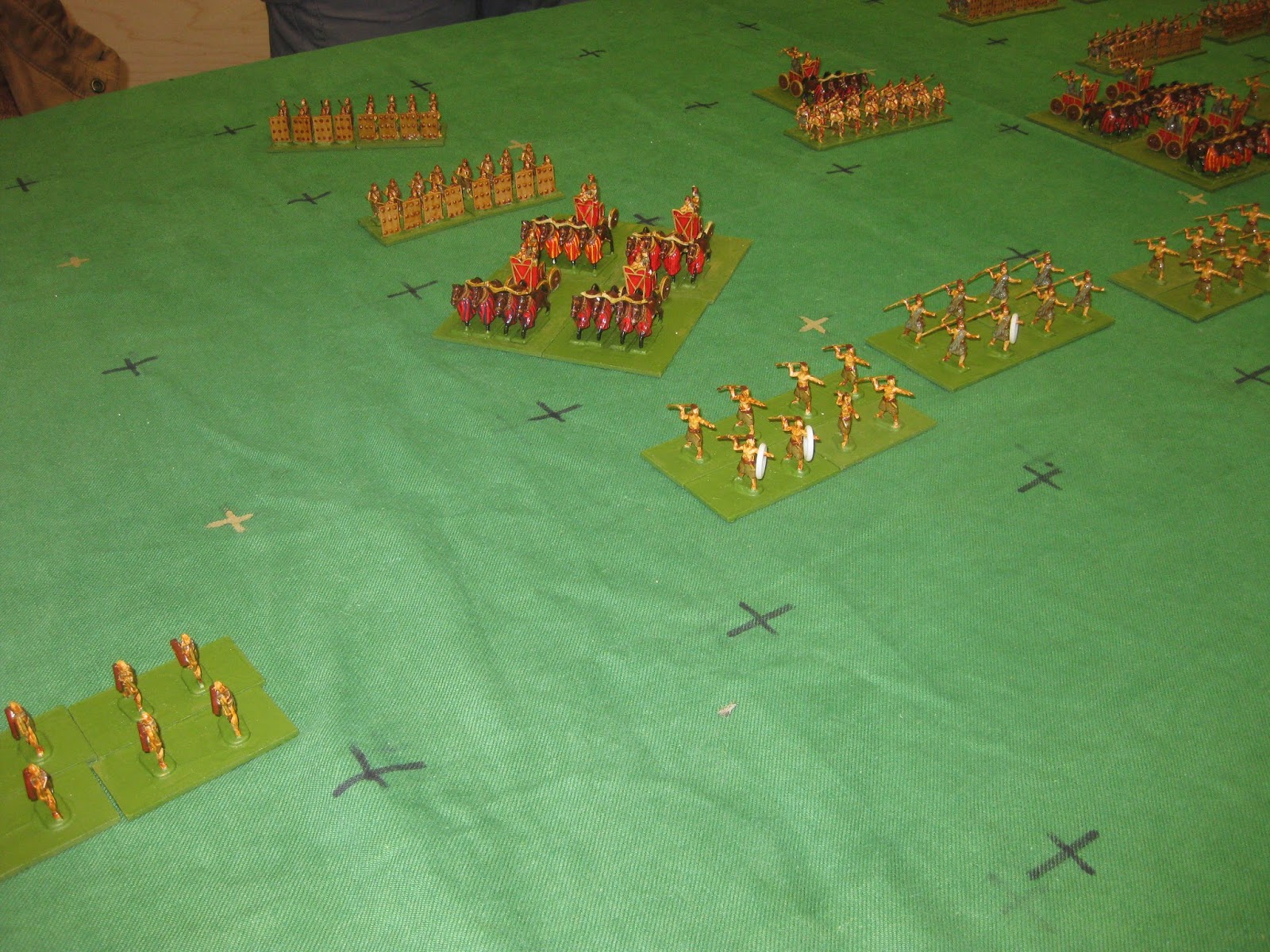 Phil's carts head for that gap in the line. 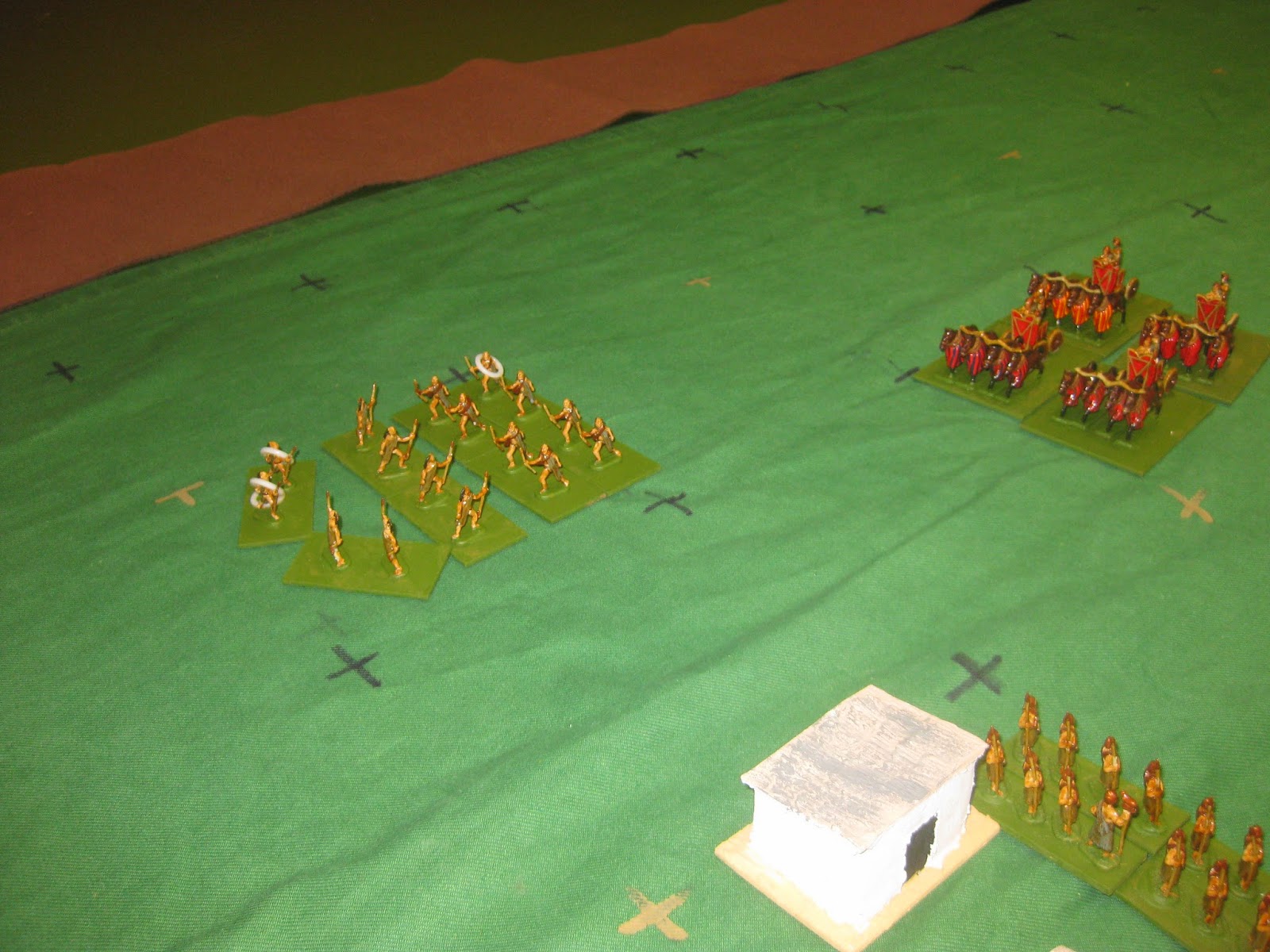 First charge of the game, first Fear Test happens on my left as two units of skirmishers face up to one another. Mine take fright and are a bit wobbly as Phil's charge home. 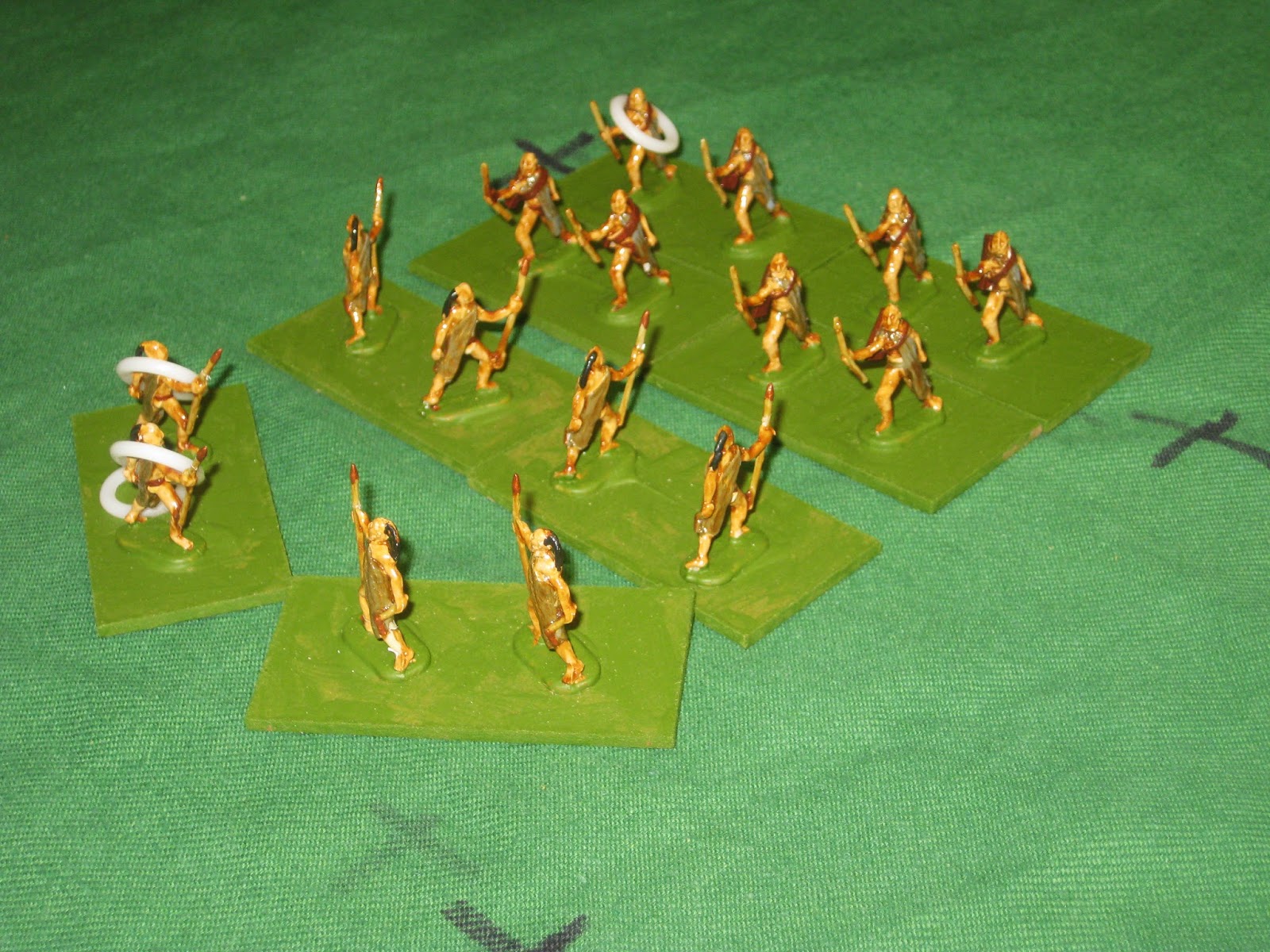 Lots of hits inflicted. My chaps will subsequently lose the fear test again, and take flight, pursued by the invaders. 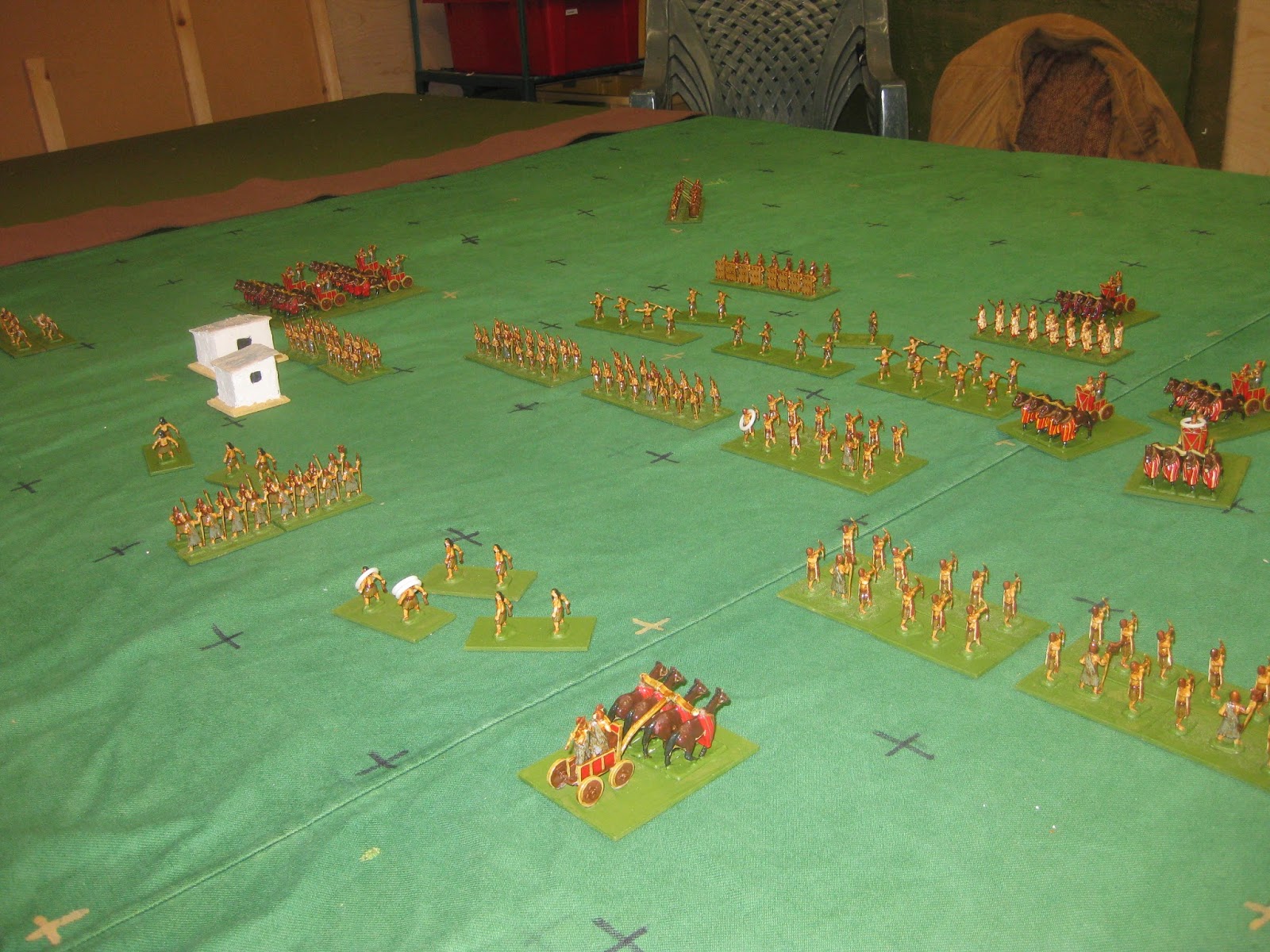 In the middle Phil's Battle Carts take fright at charging my massed archers. This is mainly precipitated by the effects of a devastating volley of archery, that kill one of the bases. First rumblings that this might not be working as it should. 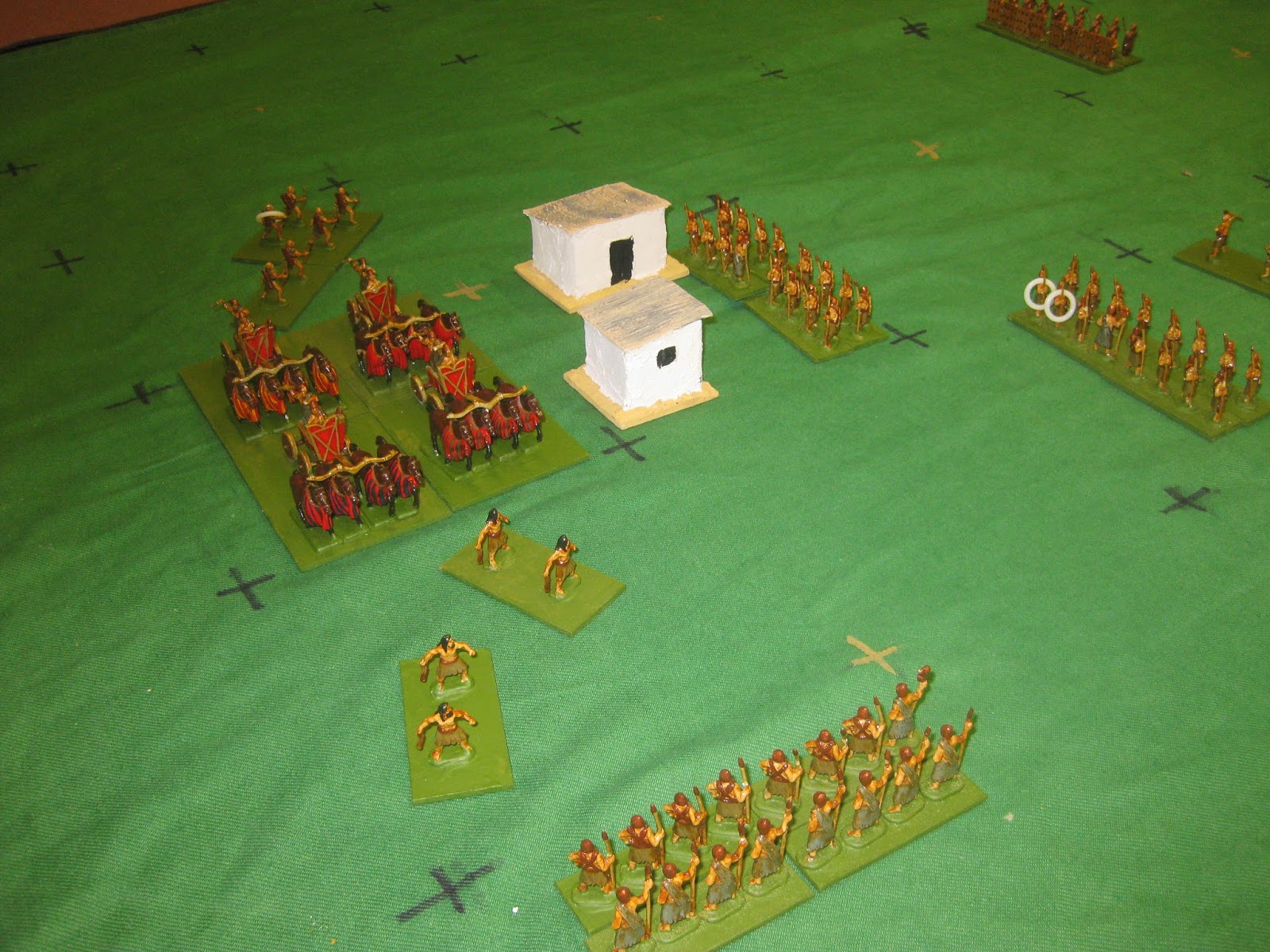 On the left flank the Battle Carts describe their stately arc around the village, threatening my retiring skirmishers, who have been driven off by some of Phil's. At least that's what I remember. 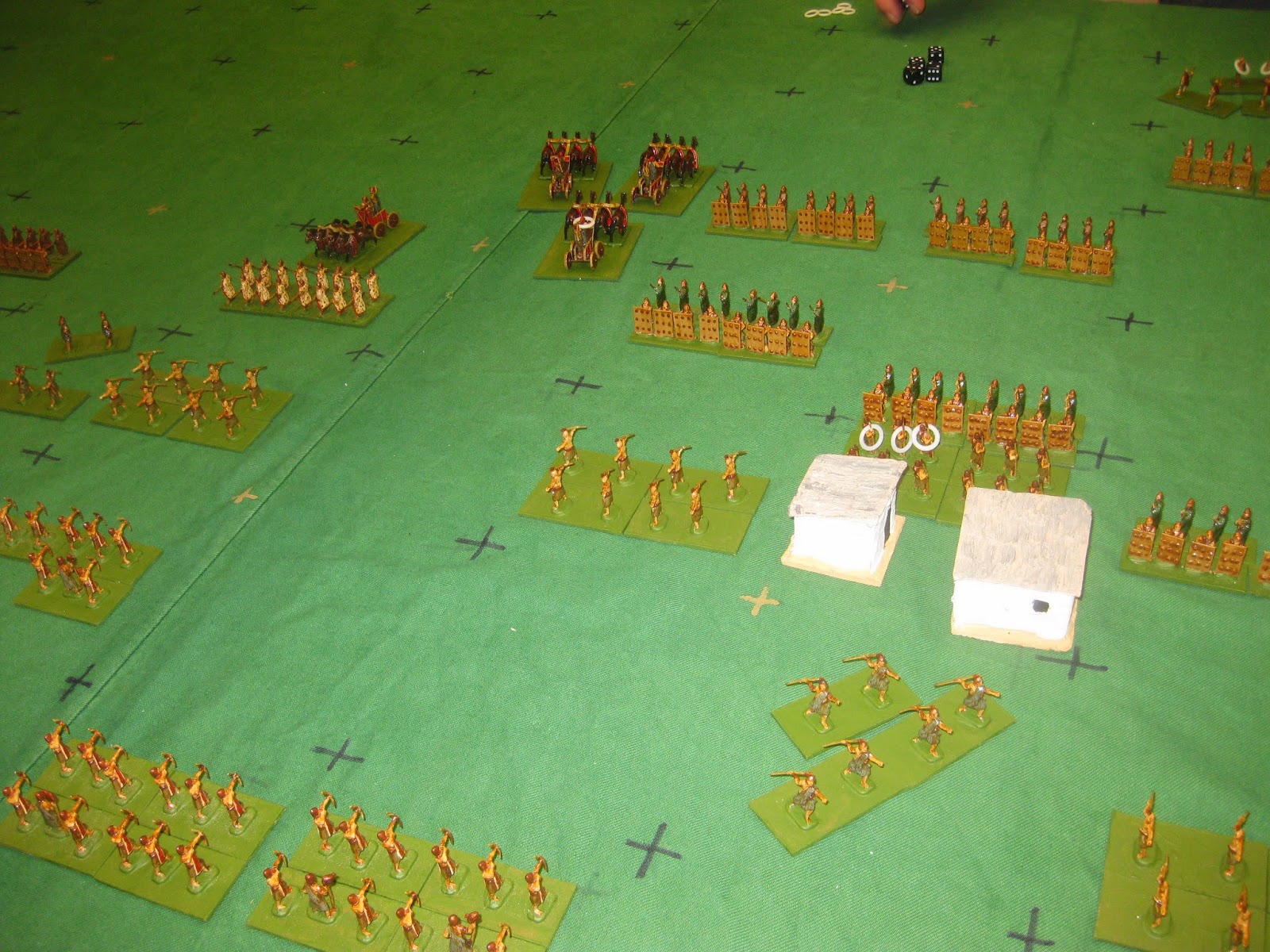 Phil's skirmishers on the right soften up my Auxiliaries in the village, enabling him to charge it with his shielded spearsmen. This melee becomes protracted, with the Fear test keeping it on a knife edge. Neither side gives anything and eventually my unit dies to the last man. 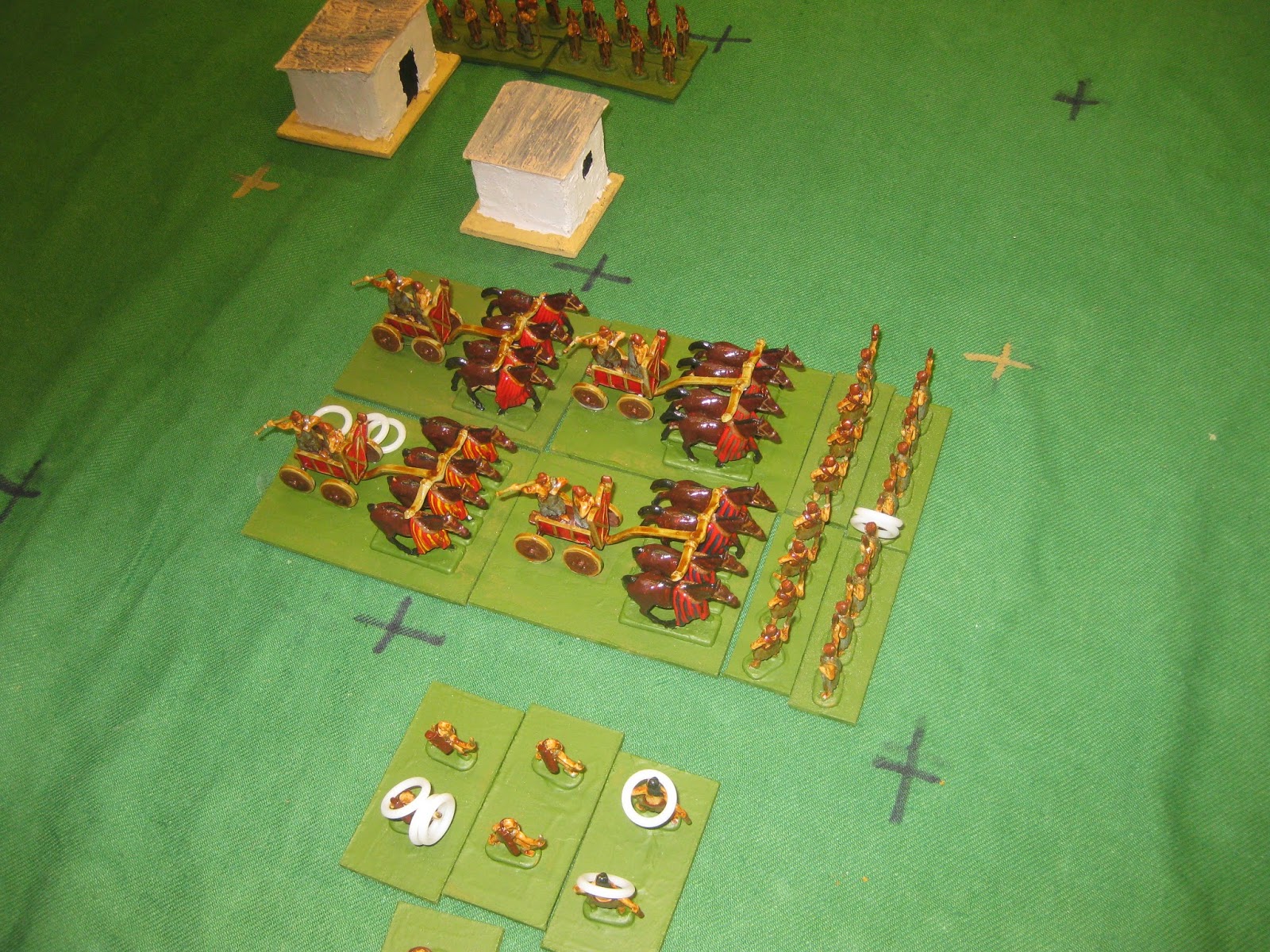 At last, the test I wanted to see. The Battle Carts pass a Fear test and charge home.The infantry are unaffected, and remain steady. This isn't good for the Carts. This melee swings backwards and forwards for the rest of the game as Phil gamely does not retire. It seems to easy for infantry to hold their ground, unperturbed by on rushing carts. In this case Phil might have benefited from inflicting a couple of missile hits before the charge. 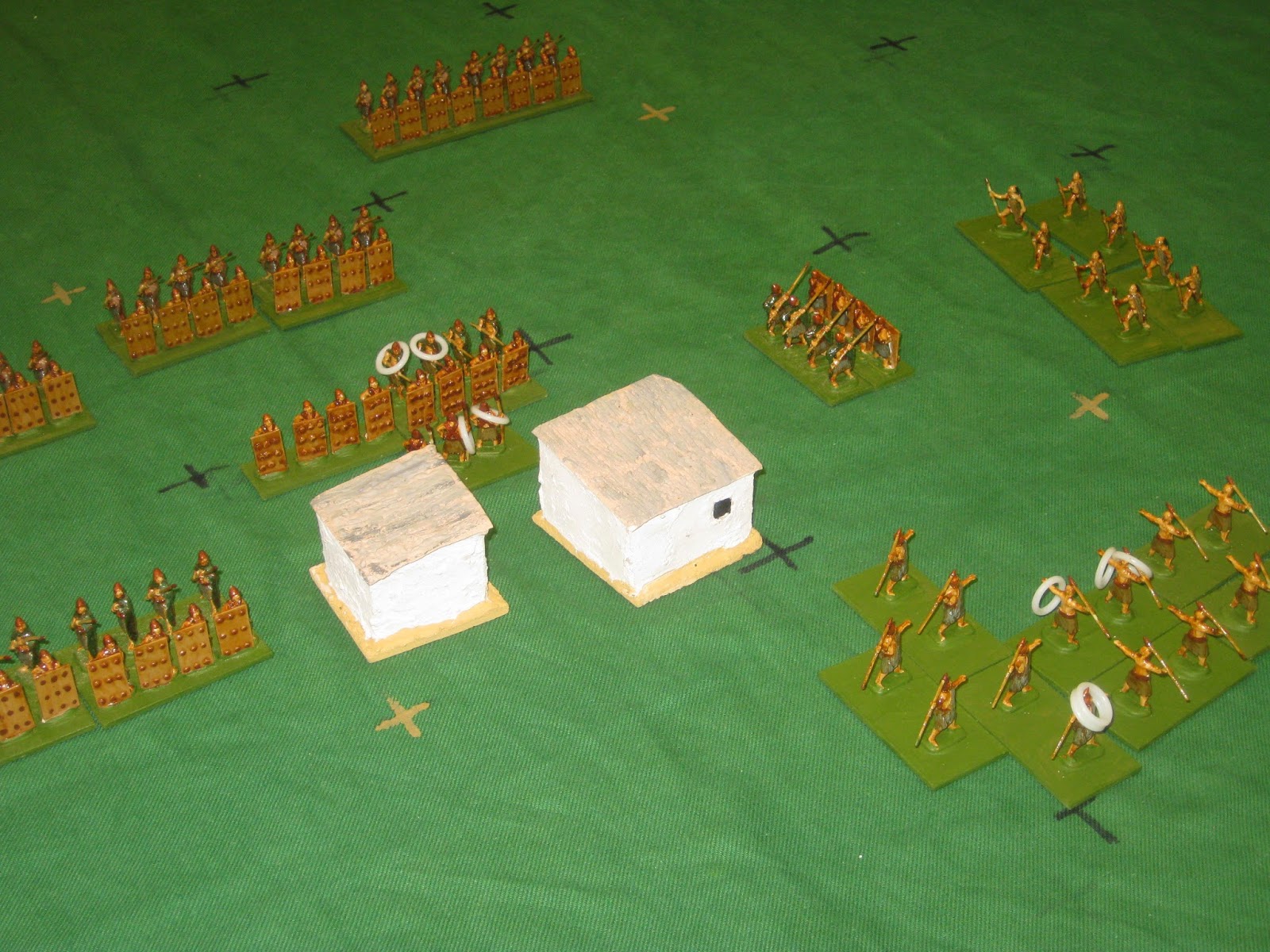 Over on the other side one of Phil's heavy units is heavily damaged by skirmisher missiles. It's clear that unprotected heavy infantry really suffer if masses of skirmishers get round them. I lost a unit in that way at the end of the game. Phil is surrounding the village, and driving off my units supporting the defenders. 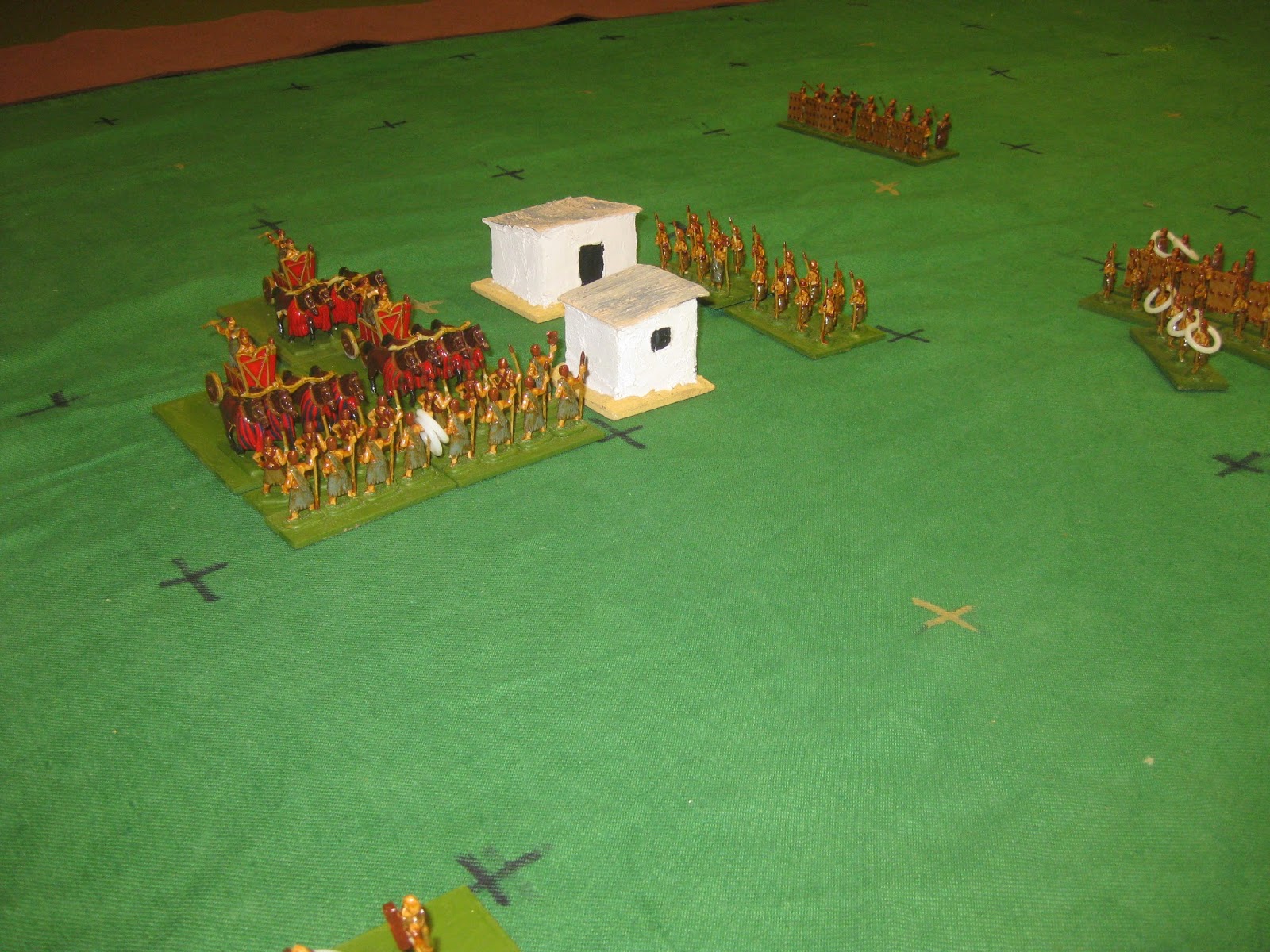 In the middle Phil's Battle Carts form up at last, and launch another charge. 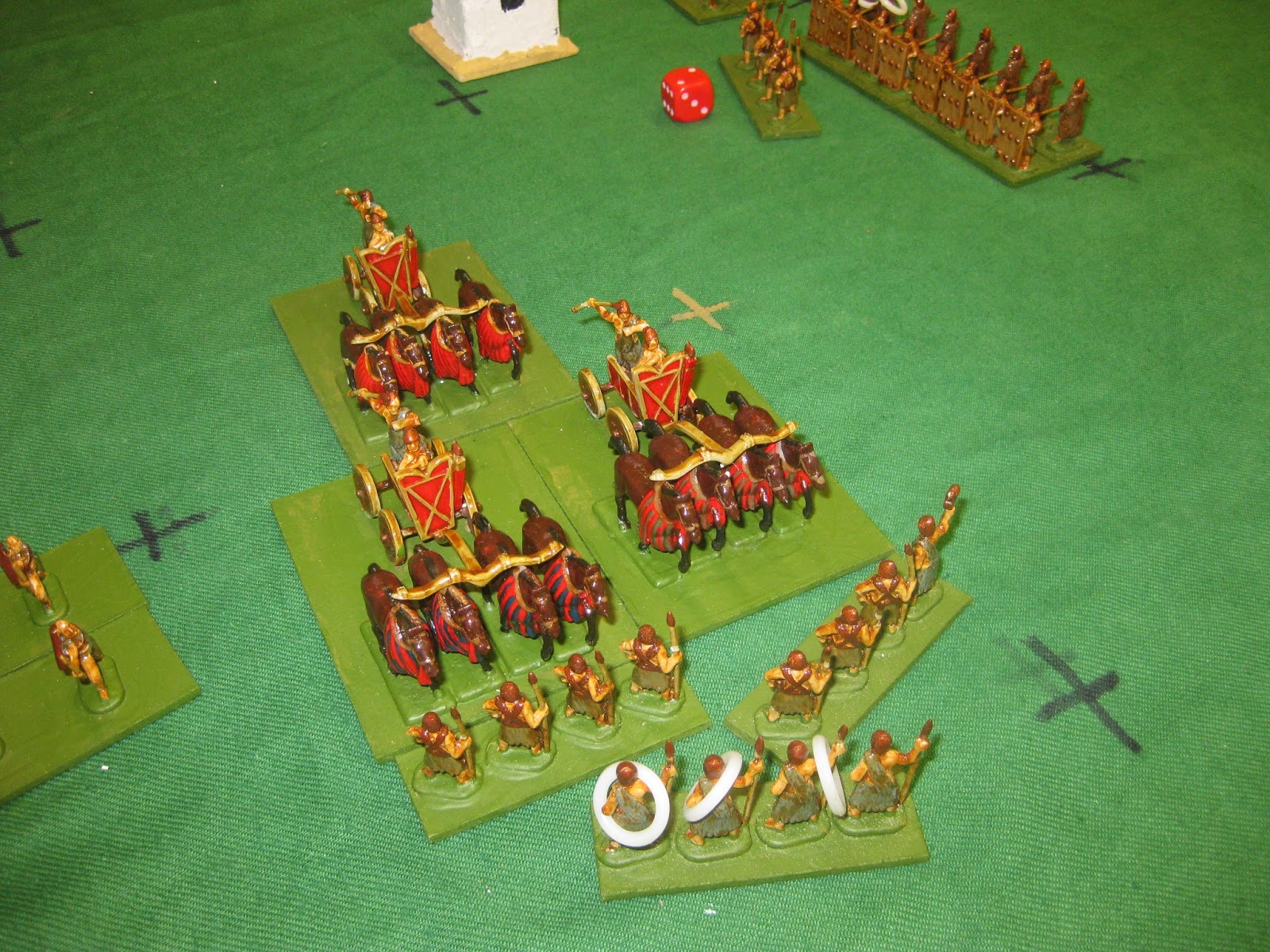 My infantry drop a level in the Fear test and it looks a bit dodgy for them.

That's when we finished the game.

Outcome was a bit mixed. The central ideas are working for me, but I need to look at balance and run some more theoretical numbers through some scenarios. The Rallying process is rubbish, so that needs surgery. But things are encouraging.
Posted by Trebian at 12:41

Email ThisBlogThis!Share to TwitterShare to FacebookShare to Pinterest
Labels: Hat, Sumerians, To Ur is Human, wargaming, wargaming in sheds