This Wednesday's Game was the latest playtest of the Sumerian Rules "To Ur is Human". It didn't go quite as well as planned.

The problem started in the morning, during my drive to work. Two lorries and a car had a disagreement on the M6 through Birmingham, so I sat in a traffic jam for about 50 minutes listening to some post rock ramblings on the iPod. My mind wandered, and it came to me how I could re-write the combat section of the rules. There had been some rumblings about figure removal (generally we're opposed to it) so I wanted to deal with that and I would also, ideally, like to come up with something a little less Neil Thomas-y for the final version of the game.

What I designed in my head was a process where hits would be allocated evenly across the bases in a unit, with the second hit becoming a "black ring" representing permanent damage. Units get benefits on the fear test if their opponents have more black rings, and damaged bases hit on a 6 instead of a 4,5,6. A unit with a mix of damaged and undamaged bases would roll black and white dice so you could tell what numbers you were looking for. The added effect of this is that for the fear test (which uses the number of dice you will roll in combat as an important factor) a damaged unit could still scare its opponents but be poor in any combat that followed. It all sounded pretty good in my head.

I got home in time to make some hand written notes on the rules and playsheets and watch that episode of "Third Rock from the Sun" with John Cleese in it. Things were looking up.

I also had my deployment cards ready as well. Richard and one of our Chris' arrived close together and we were away. The cards provided some amusement as players forgot what they'd already put down, and there were a few comments like "Oh! I've got some of those!" and "Ah! they're different to them!" Anyway, we eventually had armies facing up like this: 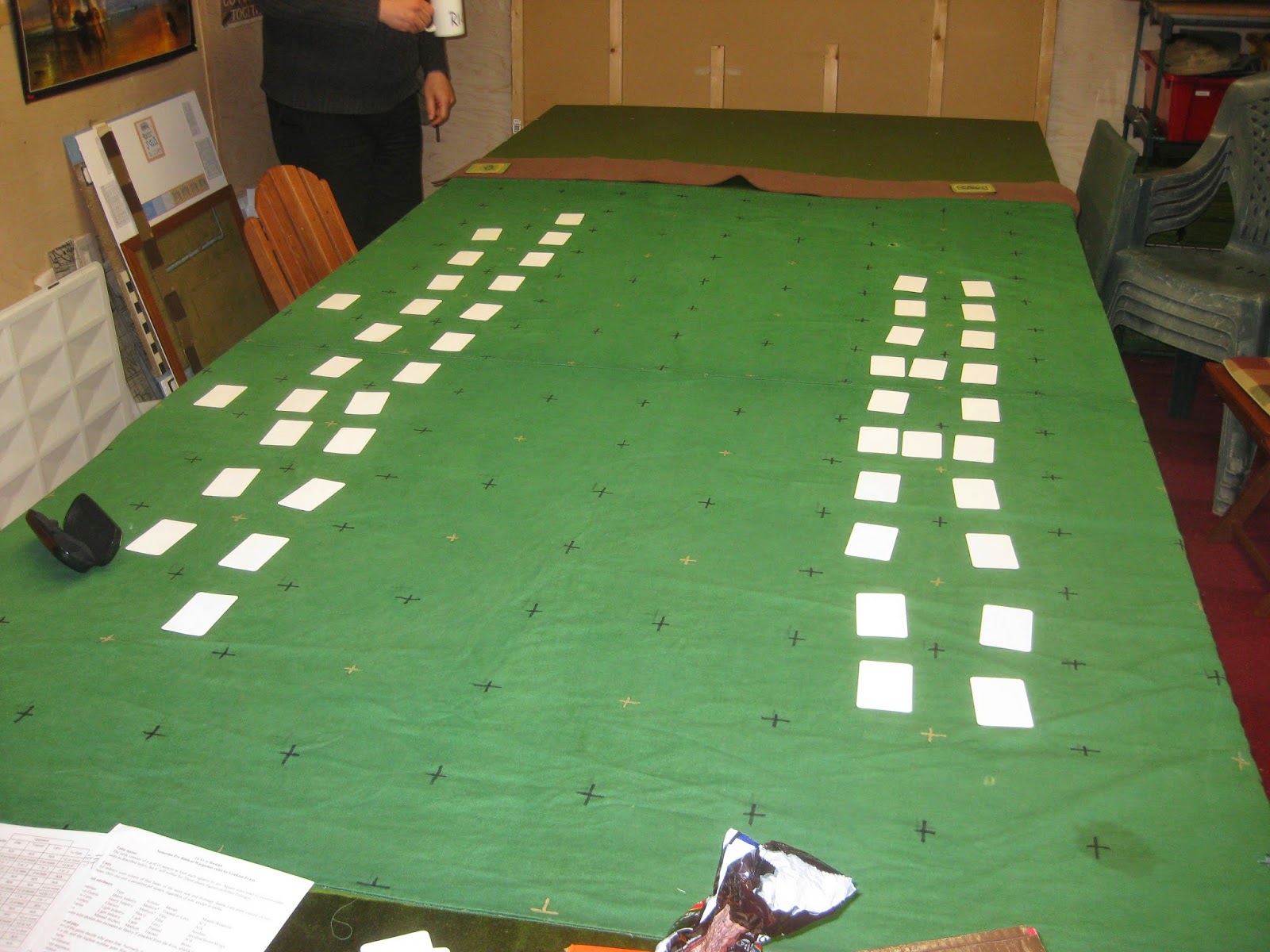 Only one unit is allowed in a square, but players have a commander who can double up, and some blanks to aid general bluffing. As Chris finished first I let him swap four cards over once Richard was done.

The armies were then revealed, with both players massing their battle carts on one flank (the opposite one), putting heavy infantry in the middle and covering the wings with lights. 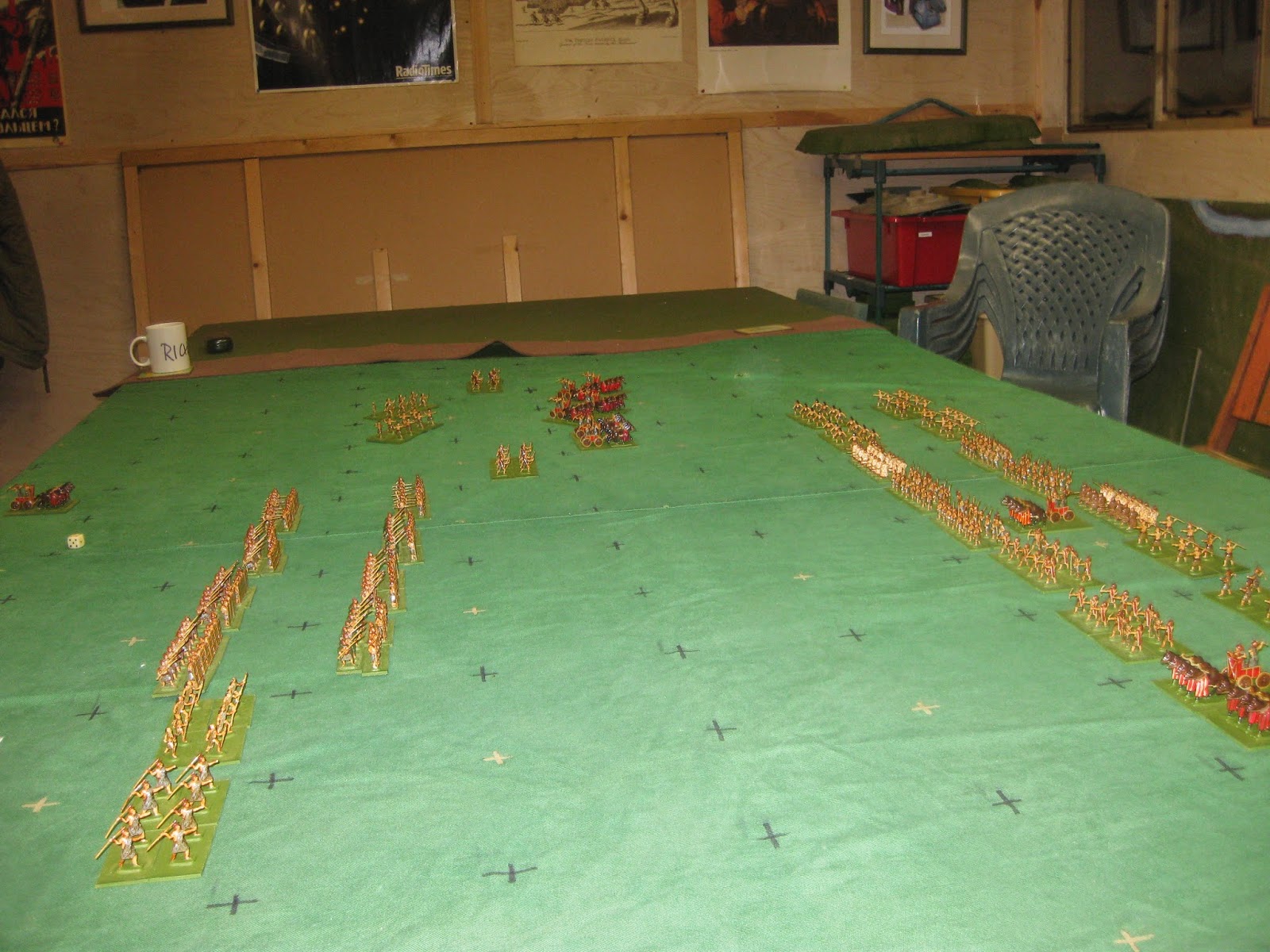 Richard opened up boldly on his left,  rushing his battle carts across the table. He also under took a general advance with his main line. Richard is a very thoughtful player and pays close attention. He is acutely aware of the issues the Carts have with wheeling and he calculated furiously to try to avoid any sweeping attack from Chris.

Chris however succeeded in pinning Richard's front line, and got on the end of it with his Battle Carts. (BTW I have no picture of it, but Richard's carts on his left flanked Chris' line and also blew away his end units, routing them in the fear test. Some extreme die rolling was involved, but also the first indications that my tweaks to the rules, including the fear test, might have unbalanced the game slightly). 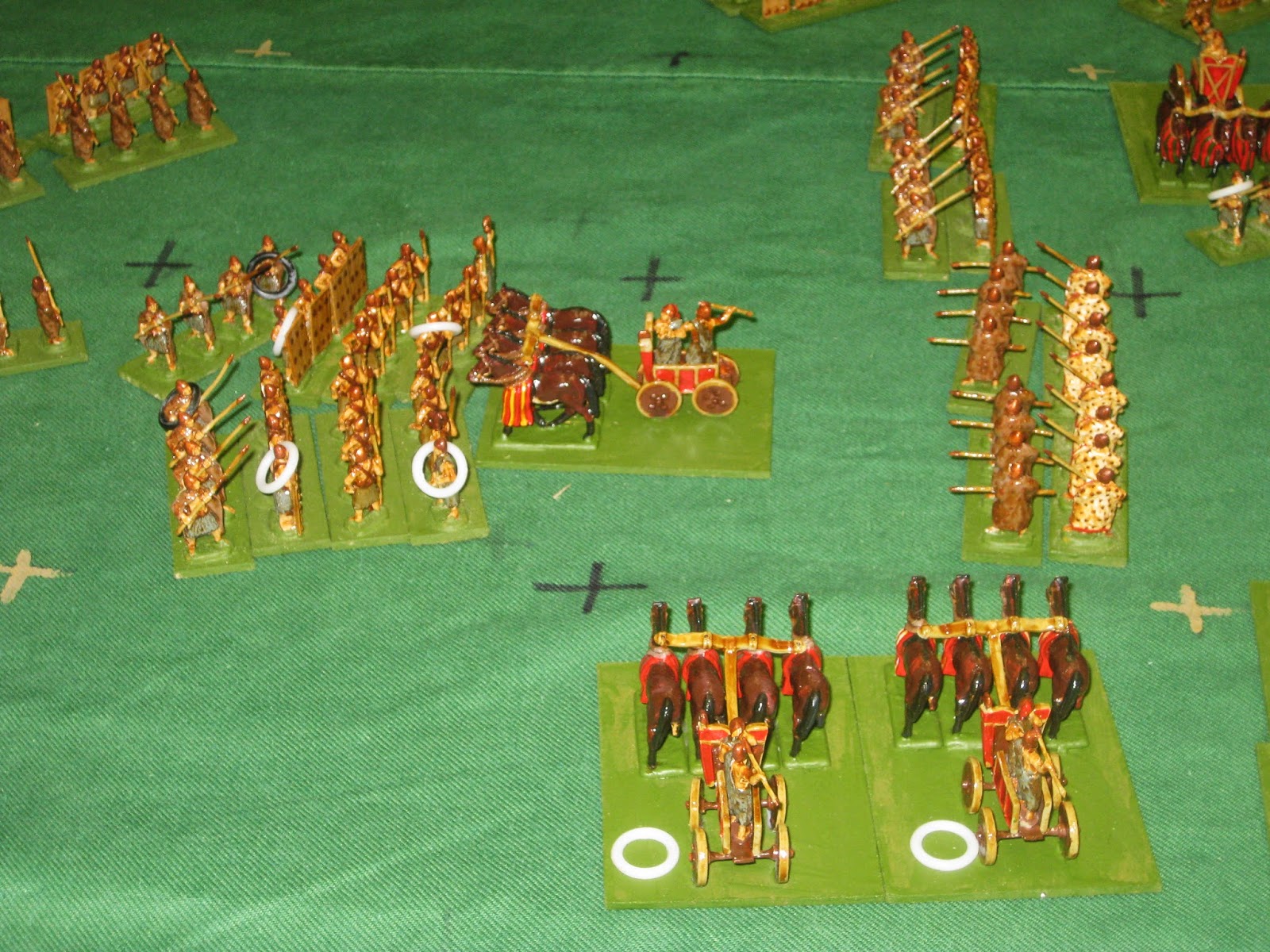 Flanked by the carts and engaged head on by  infantry lead by Chris's General, Richard's middle started to crumble a bit. 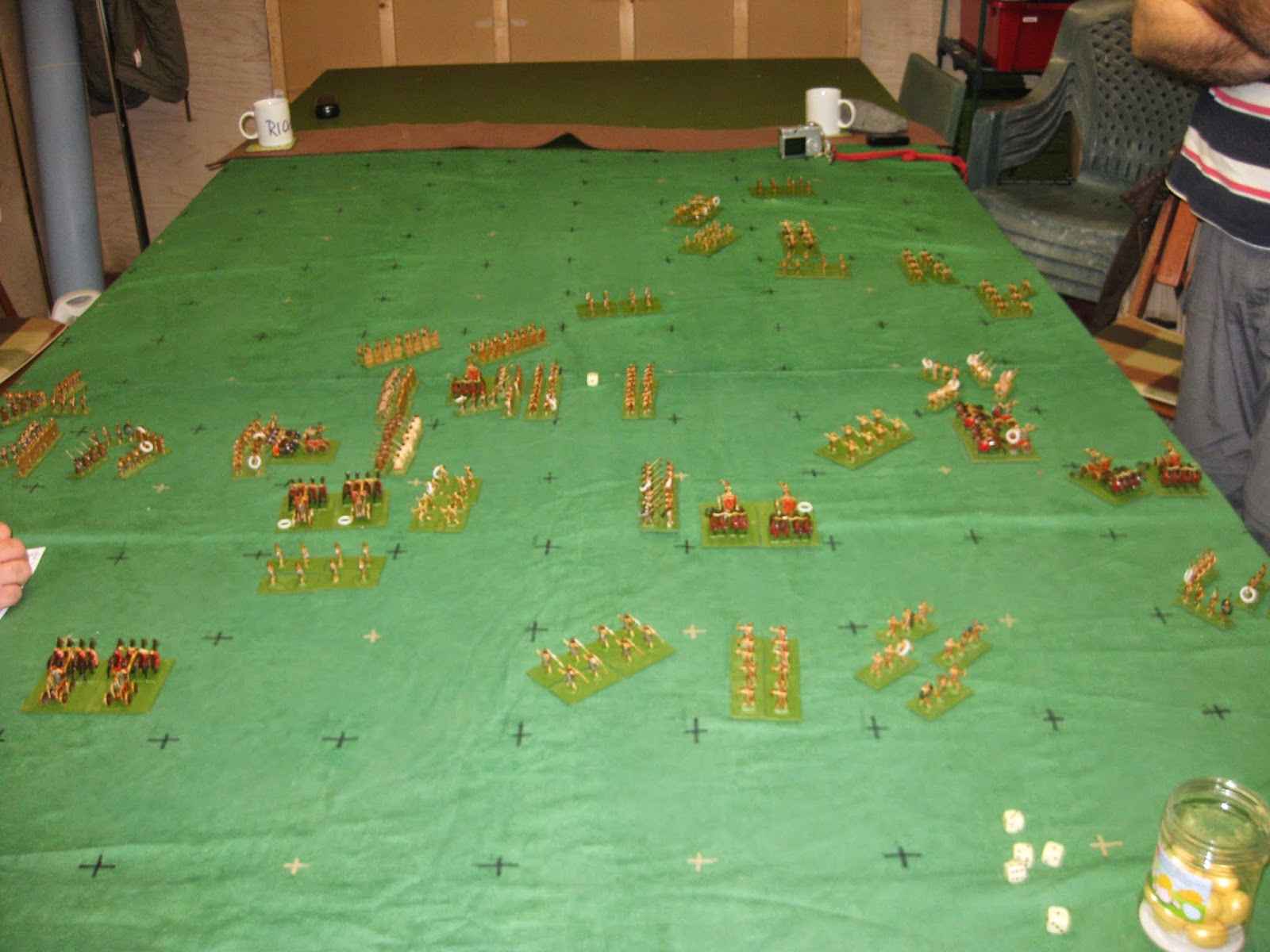 By the time Phil arrived we were looking at a revolving door, with units apparently fleeing at the drop of a hat. You can see middle right that Richard's carts have broken right through and are pursuing routers... 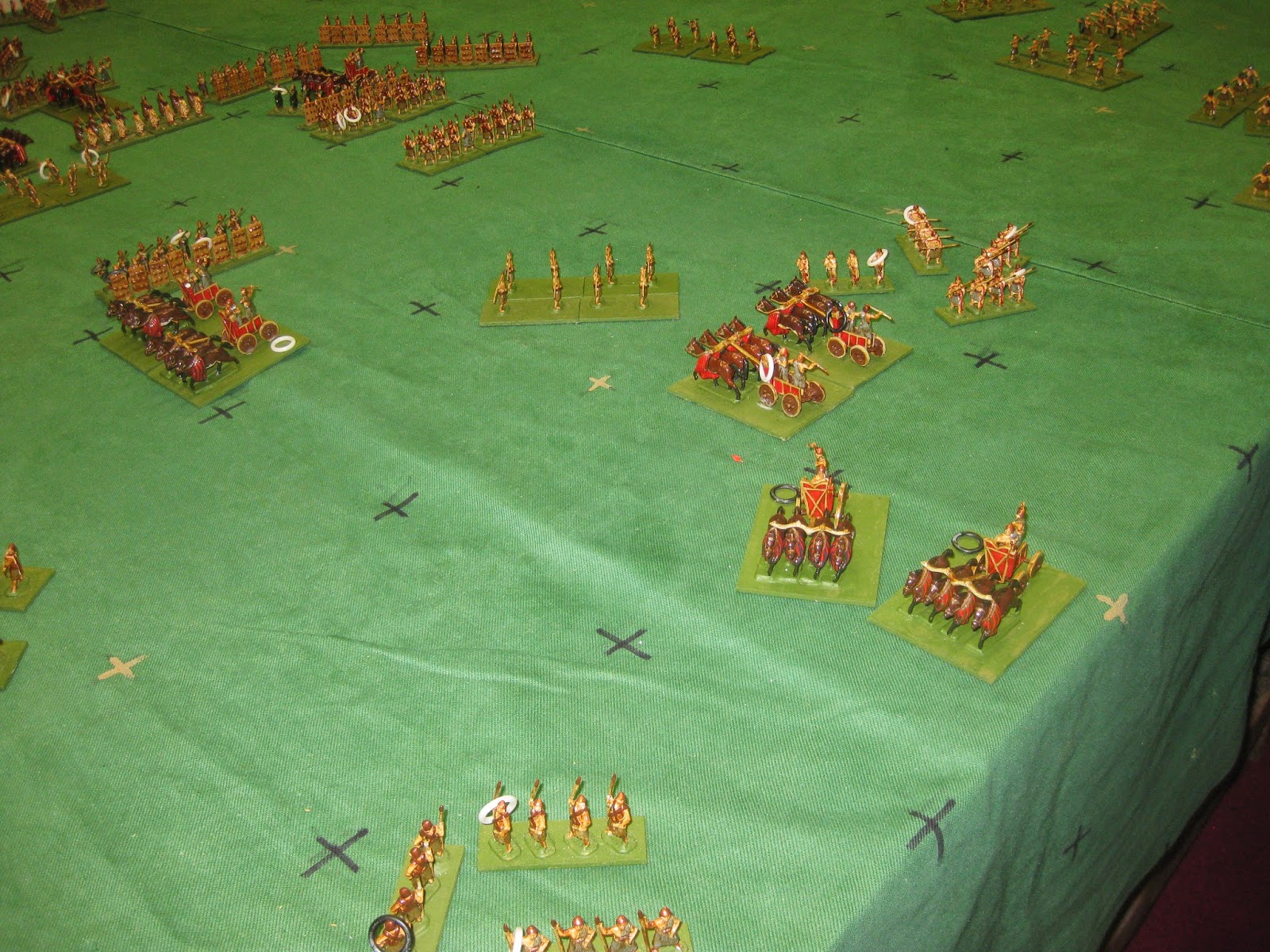 ...only a combination of a poorly thought out rule and some extreme die rolling meant they "bounced" and took fright. 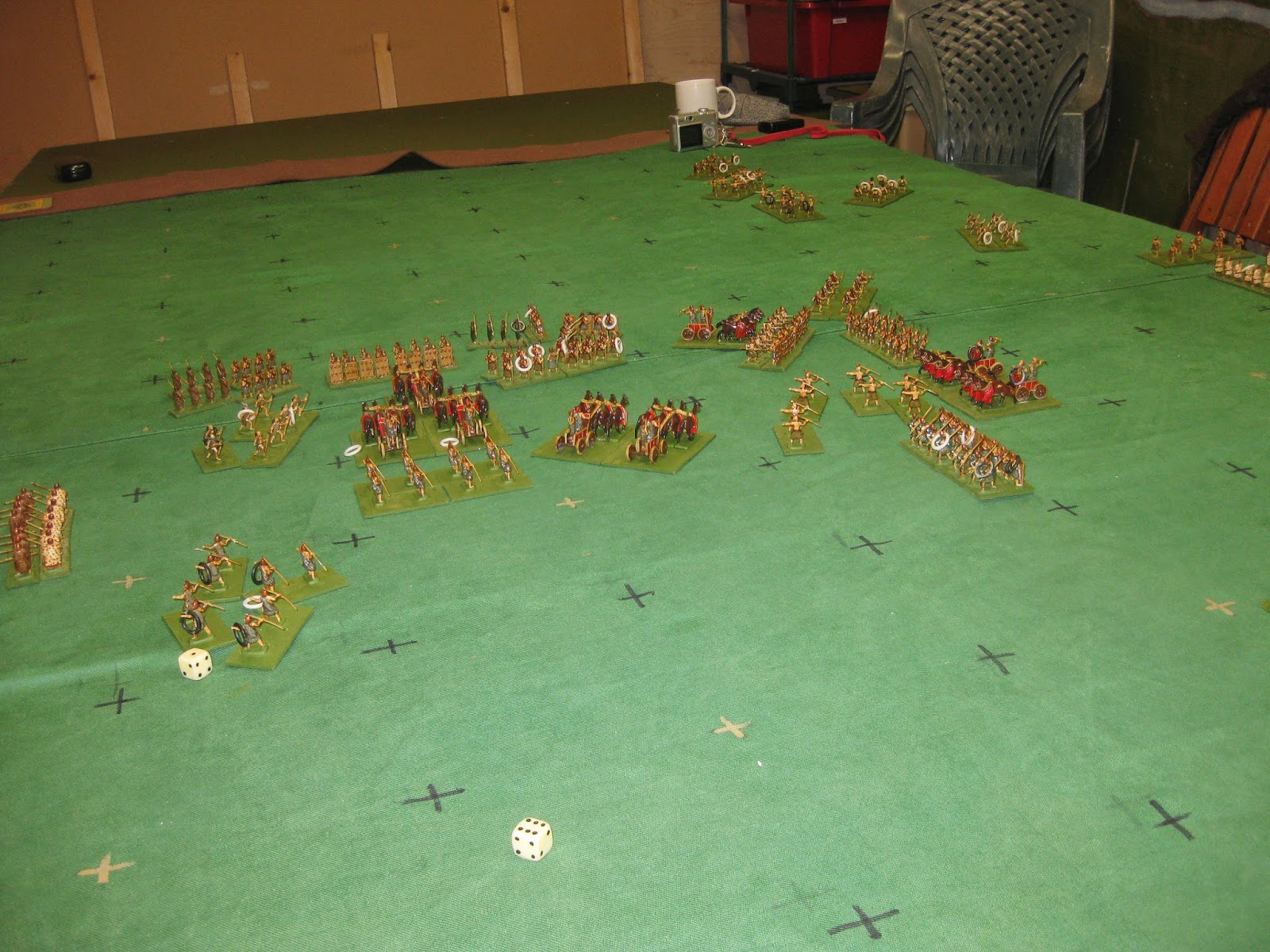 Elsewhere was chaos as the middle of Richard's army mostly retreated under a brave push lead by Phil/Chris' General. Learning from this Richard's General attached himself to some foot and shored the position up. 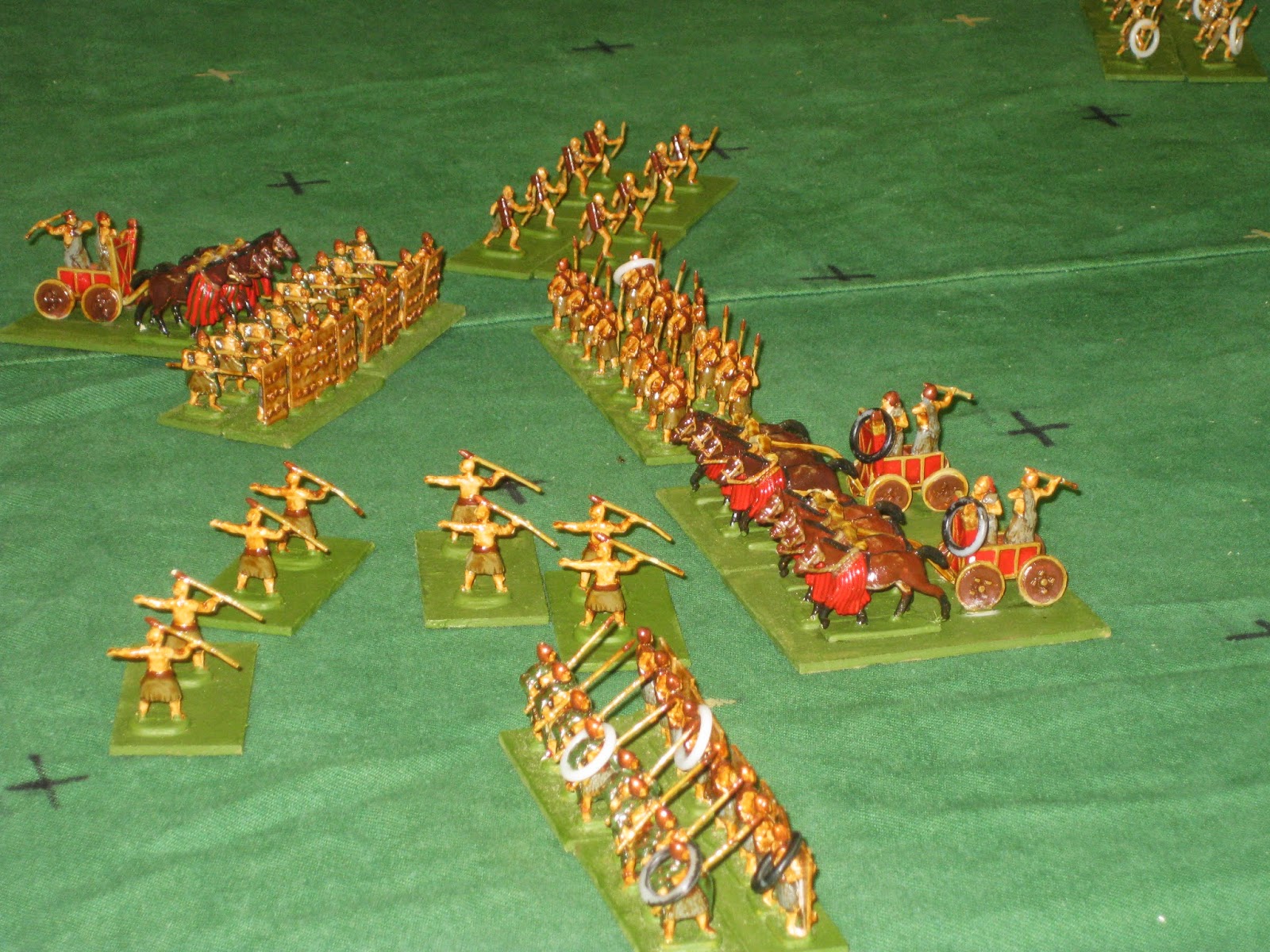 The problem with doing Sumerians v Sumerians is both sides look the same. I really do not have any idea of who is beating who in the picture above.

The game ended being called as a straggly draw. Not entirely satisfactory all round, really. I had made two major sets of changes so it isn't clear which one took the balance out of the game. Probably the new combat system, but the fear rules also need taming. The Battle Carts rode their luck and turned out being devastating, - much too devastating, a criticism I had of an earlier draft.

So I made some notes and I need to look at the numbers again on the die rolling and odds. I'm not a fan of 6 always wins, 1 always fails, as it sort of implies that you've got your modifiers wrong and outcomes are pushed to extremes. However I made need to consider some type of rule like that for the fear tests to give Levy Units a chance and to restrain the Elites..

Much food for thought.

Next week, Phil is putting on a pirate game I think, -something called "FoG - Arrrr"!

Email ThisBlogThis!Share to TwitterShare to FacebookShare to Pinterest
Labels: Sumerians, To Ur is Human, wargaming, wargaming in sheds