A bunch of old FoGgies

Oh look! lots of 28mm or is it 25mm figures? When I bought many of these they were 25mm. Now, having been left in the box for over 20 years, they've apparently grown 3mm.

Any how, let's start at the beginning. Phil has been playing a bit of FoG-R in the last few months, and knowing I've got a big renaissance collection suggested we give it a go. Regular readers will have seen my Flodden Field English, but my renaissance armies encompass contemporary French, all the way through the 16th Century up to the start of the 30 Years War. I've got quite a few Landsknecht/Swiss.

Last weekend I did a count of my elements and sent them over to Phil so he could draw up some armies. He couldn't find his booklet ("Trade & Treachery"?) so he sourced some lists from the internet and I struggled to understand them. In the end we ended up with Huguenot French from the Royalist period (Henri IV rather than Henri de Navarre) faced by some Spaniards (late Italian Wars masquerading as the Duke of Parma).

On a side note I must say that the Huguenots are one of my favourite armies.I started collecting them at University, and I was one of Essex Miniatures' earlier customers. The figures come from all sorts of manufacturers and were built up over at least a 20 year period. The initial Huguenot shot units were all individually modified. Every figure is unique, not in the modern way of gluing pre-provided different arms on a figure, but by cutting, twisting, filing and filling. Likewise my unit of Minifig Reiters. They were a labour of love from a period in my life when I had the eye sight and manual dexterity to deliver a quality finished product. Getting to play with them again was just wonderful.

Back to the game. whilst waiting for Phil I threw some terrain on the table. I did this in advance of being absolutely sure what the armies were going to be. In retrospect I'd have done myself some favours by making the central area a bit more open, and the stream was a bit of a mistake. 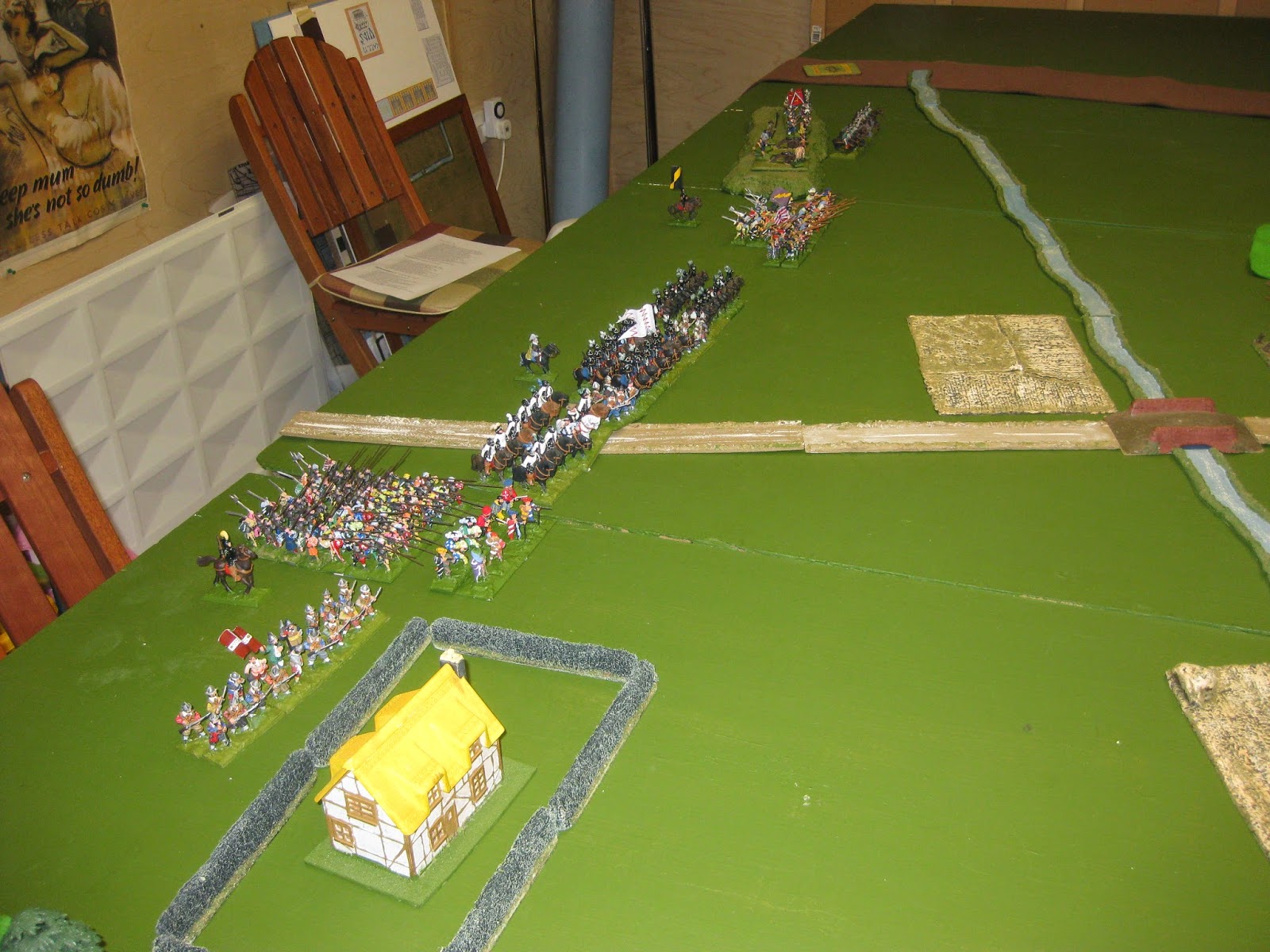 So these are my Huguenots, complete with three units of Reiters, lead by Henri, and supported by two units of commanded shot. On their right is a strong Swiss unit. Ideally I wanted a big cavalry scrap in the centre, whilst the Swiss smash in the Spanish left wing, 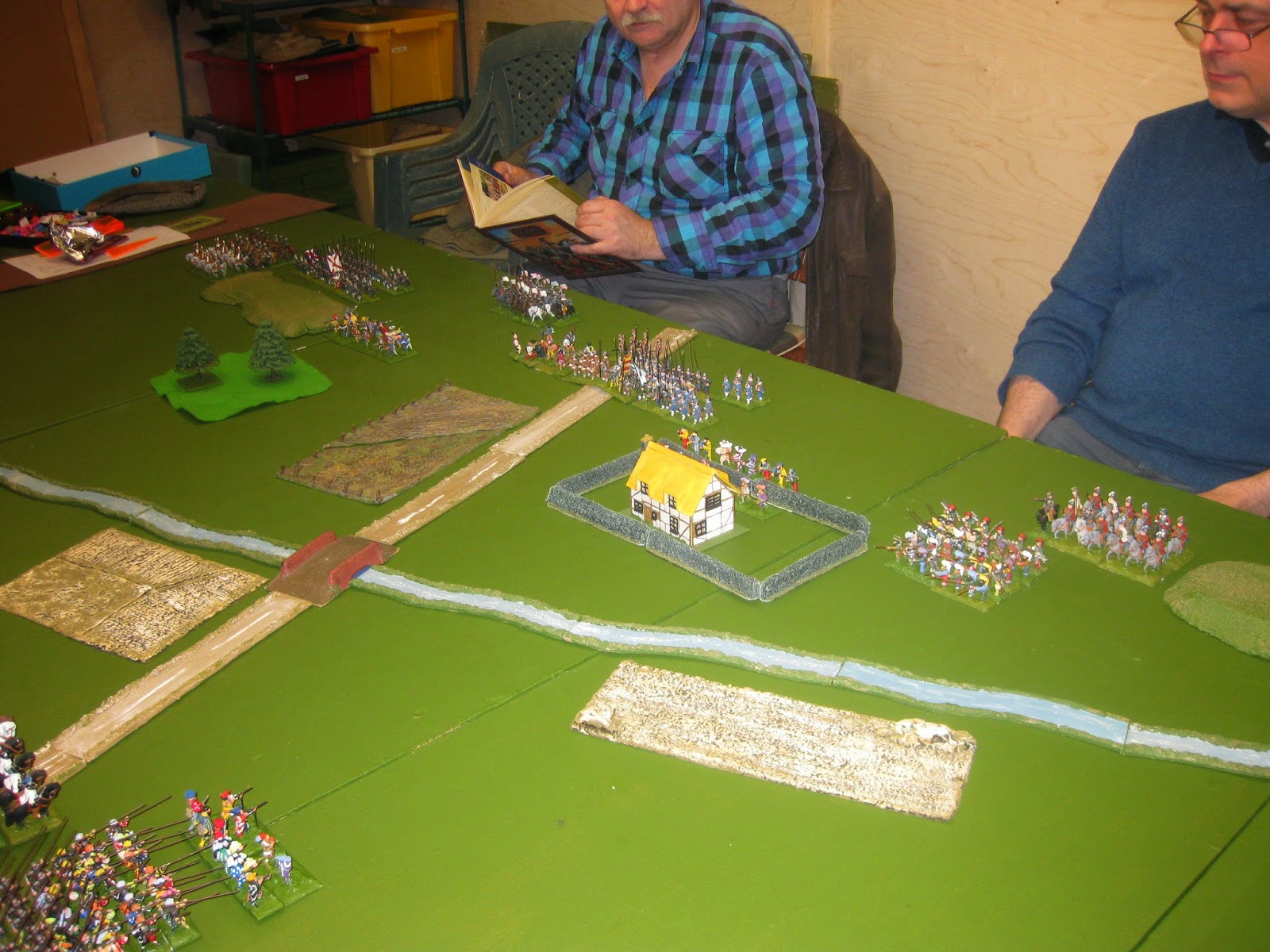 Richard took the Spanish*, advised by Phil, putting a strong infantry Tercio in the middle supported by Burgundian cavalry. His right had a Tercio and a couple of cavalry units (lancers and Stradiots), his left some landsknechts and some mounted arquebusiers (I had some of the latter, on my left wing. Helpfully described in the army list as "Crap Dragoons".)

As it was my first game with FoG-R my aim was to use the army as historically as I could.and avoid any rules-based tactics. Fun more than winning was my aim. 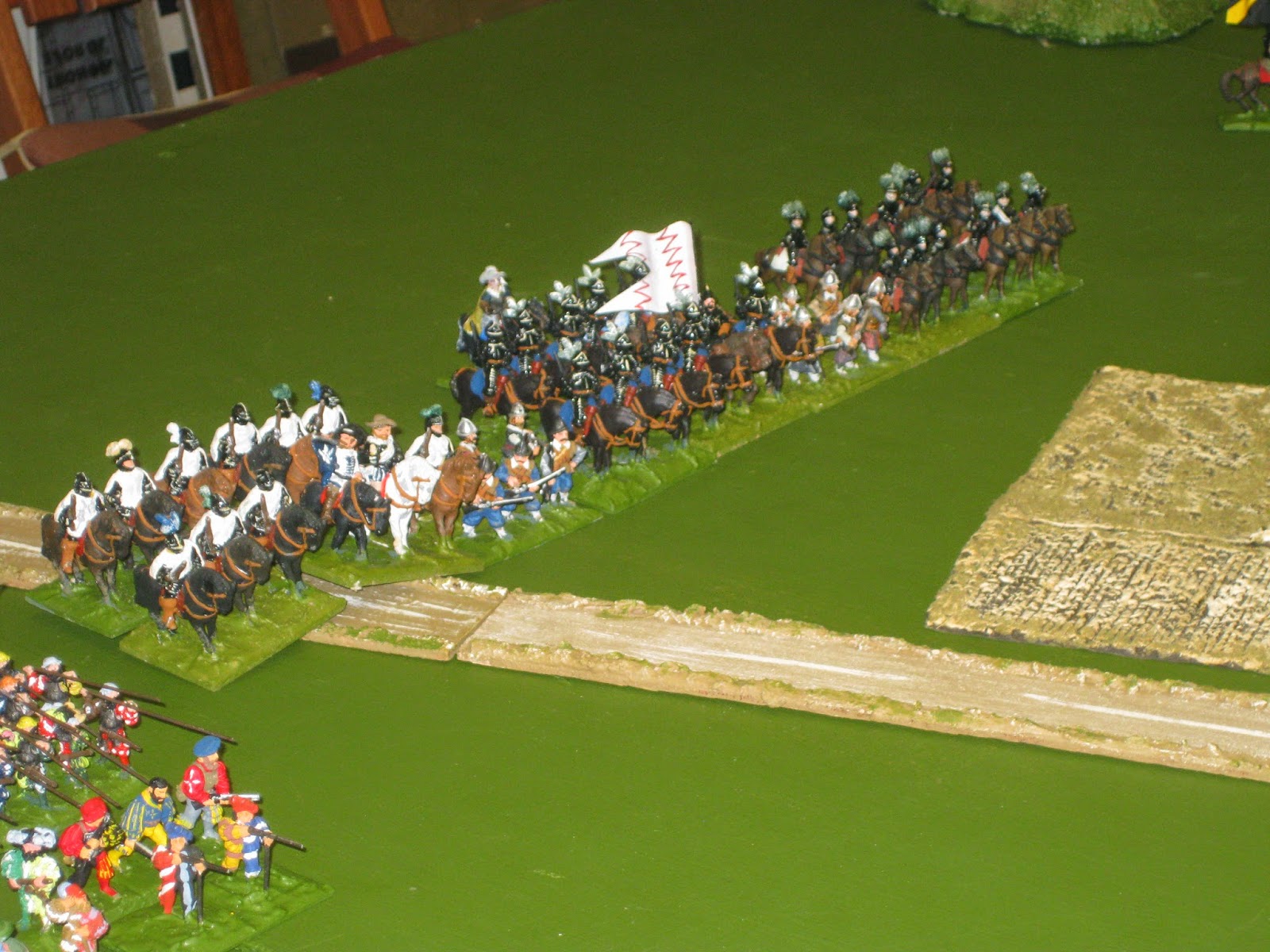 I started off with an aggressive move with the Swiss, supported by the central Reiters. The left wing I left to defend the hill and river line. 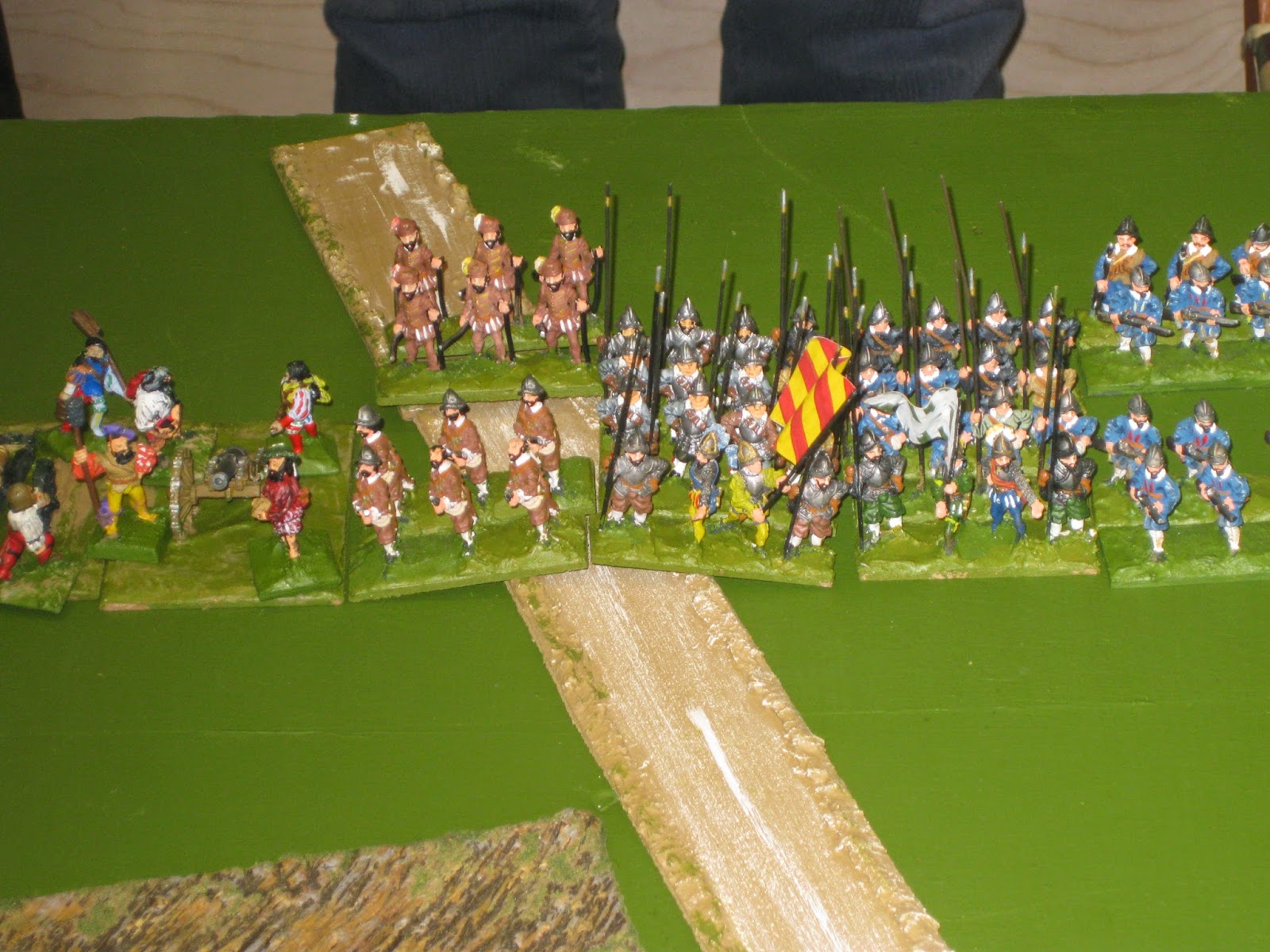 This picture is just a close up of one of the Tercios. The figure scale in FoG-R is obviously a bit smaller than my original units, as this is mostly two of my original Tercios mashed together. 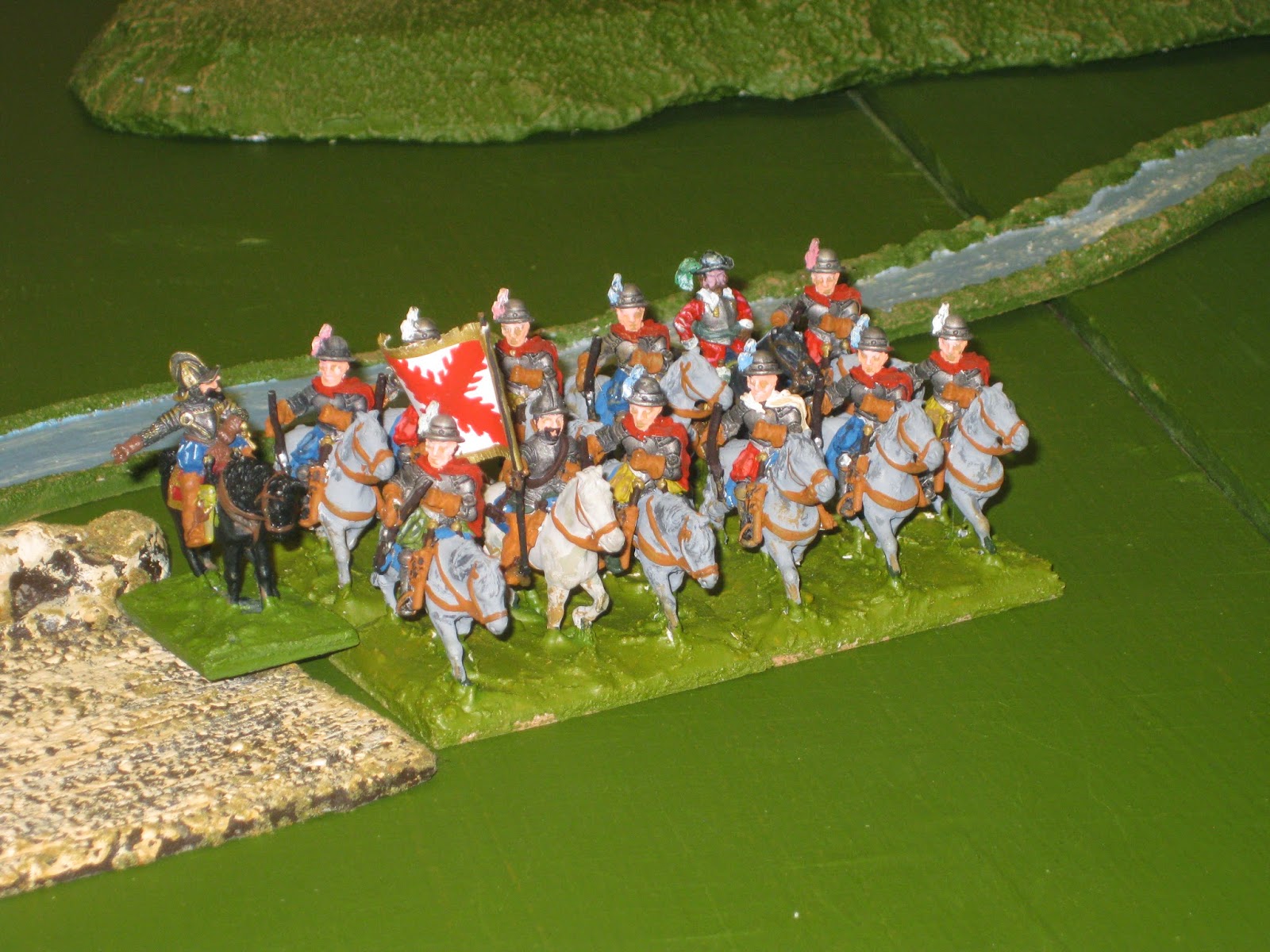 Just a close up of the Spanish Hargaultiers, or mounted arquebusiers to you and me. 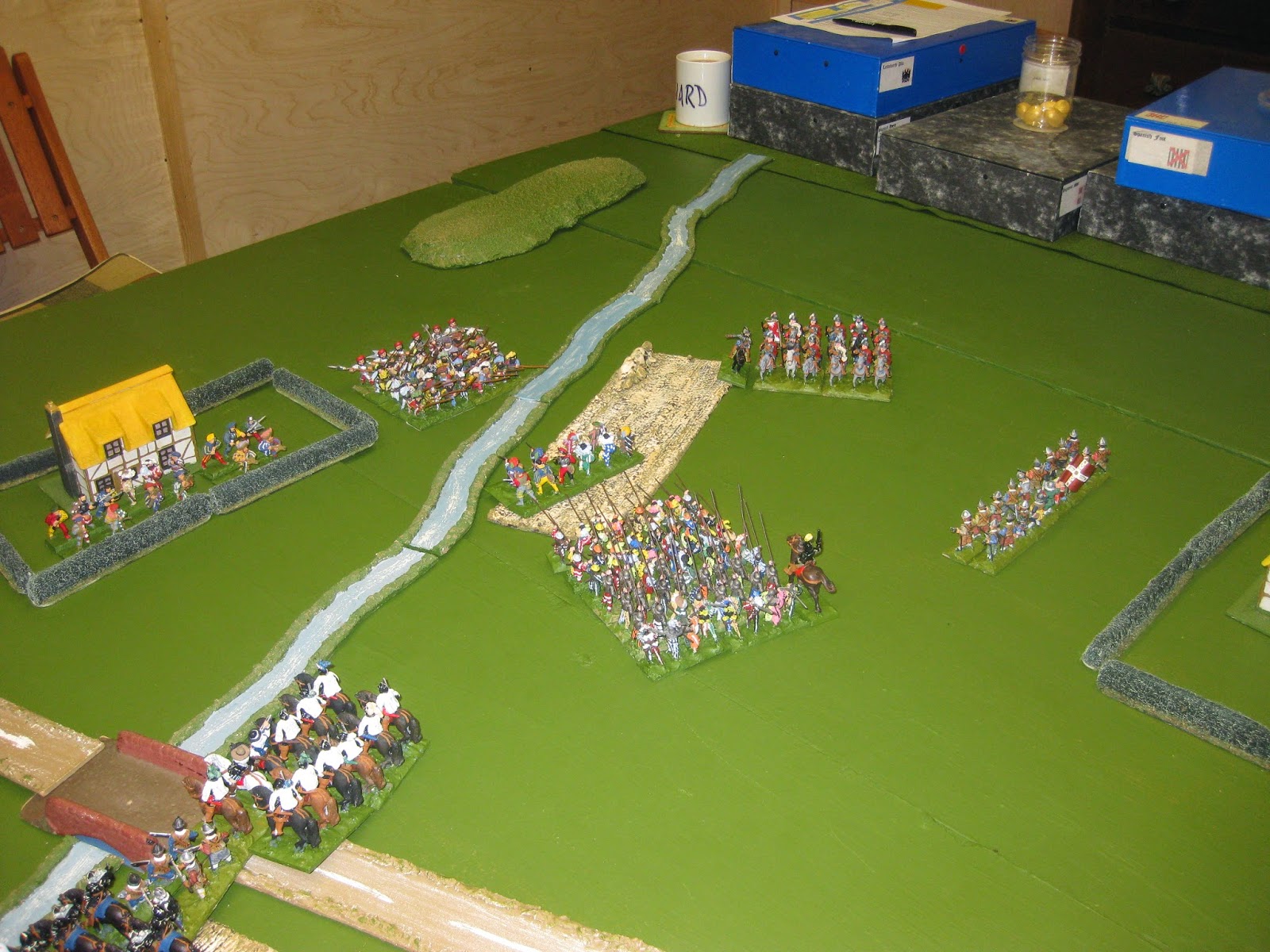 This is my right wing. You can see my Swiss homing in on Richard's landsknechts. My unit of Huguenot foot (all arquebus armed) has boldly advanced out of the farmyard as they're not bothered by those scruffy horse, who will be blown away by the hot work from my arquebuses. 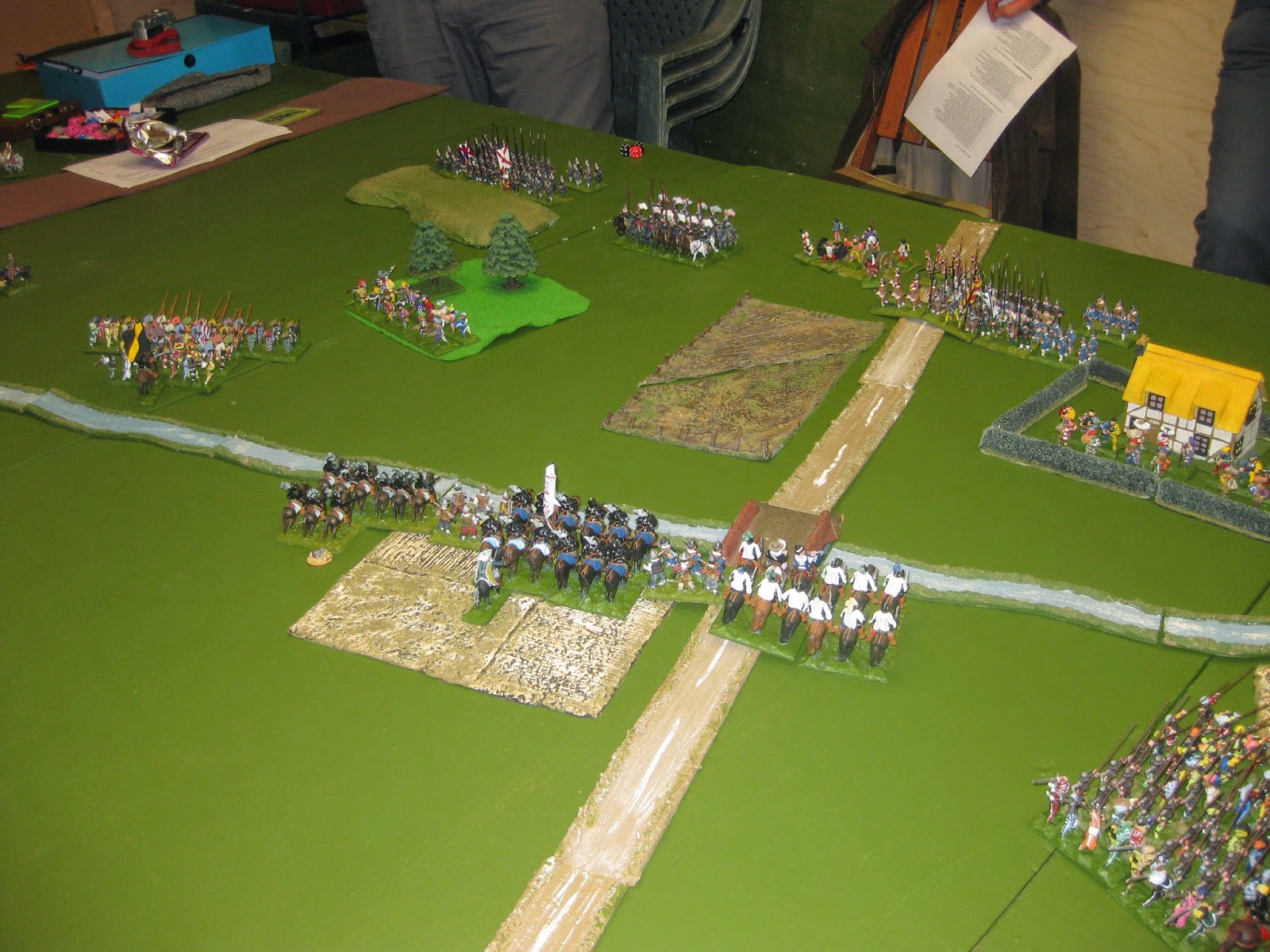 I'm also clearly dominating the centre of the board as well with my horse. 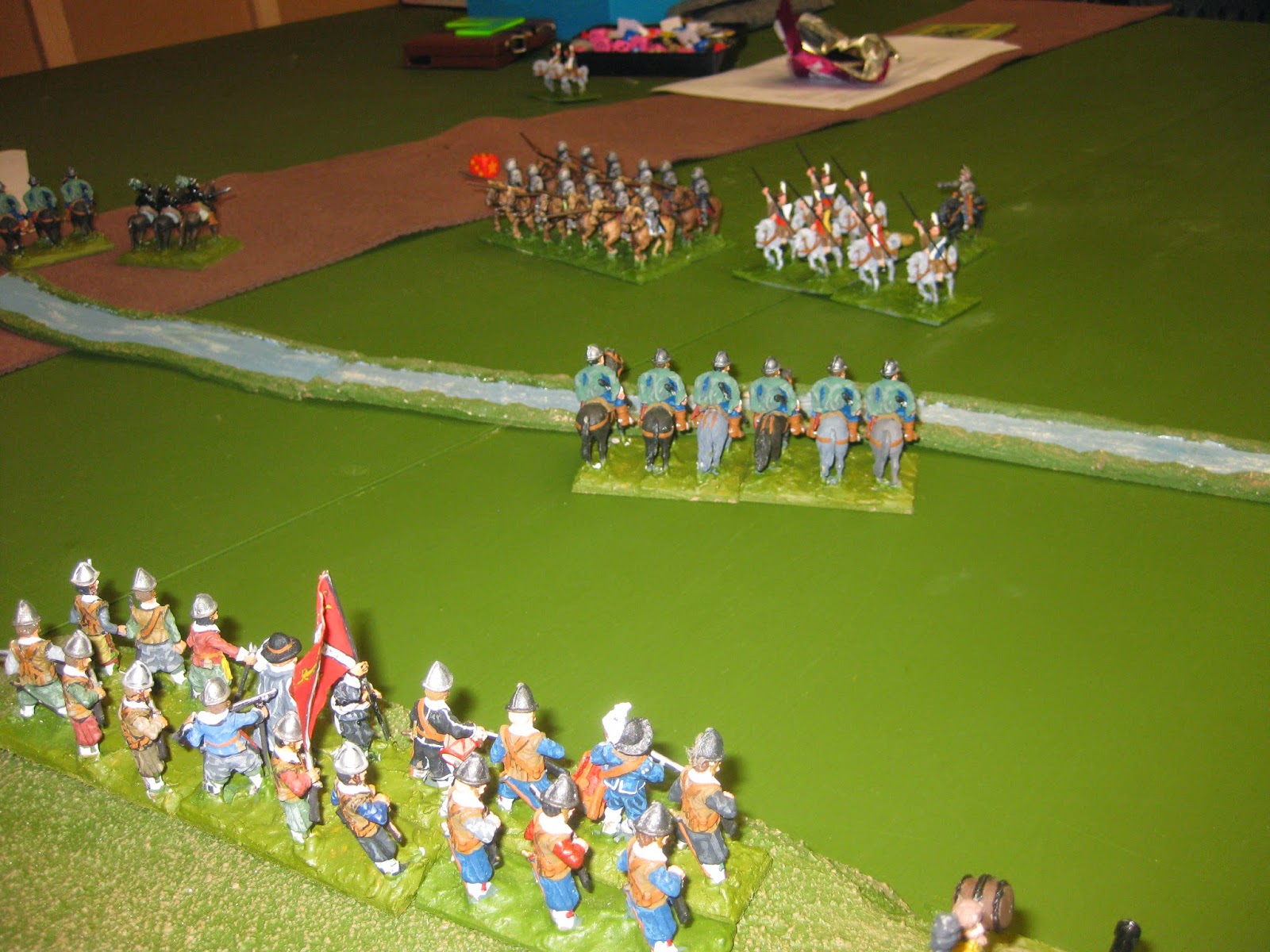 On my left my "crap dragoons" were in danger of being overwhelmed by Richard's two units.He was feeling pretty good about this, despite taking some artillery hits on his Stradiots, as he was now out of arc and reckoning that there was nothing substantial in his way. 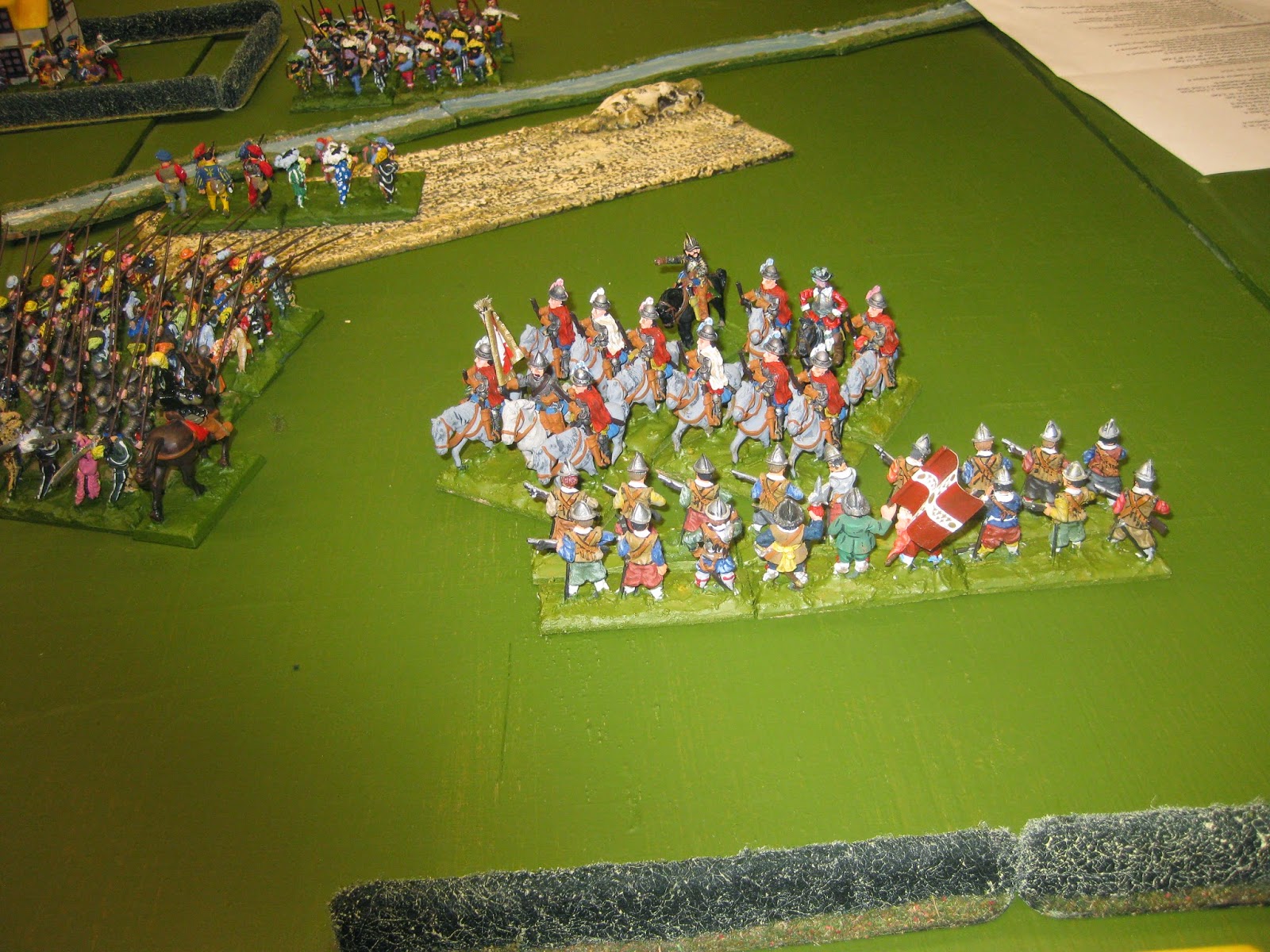 Then I got a bit caught out on my right. The Hargaultiers charge range is longer than my arquebus range (NB we are using 2" to an MU here), so they launched a charge at me and I didn't get to shoot at them. After a brief discussion I had to accept this was player error not a fault with the rules. 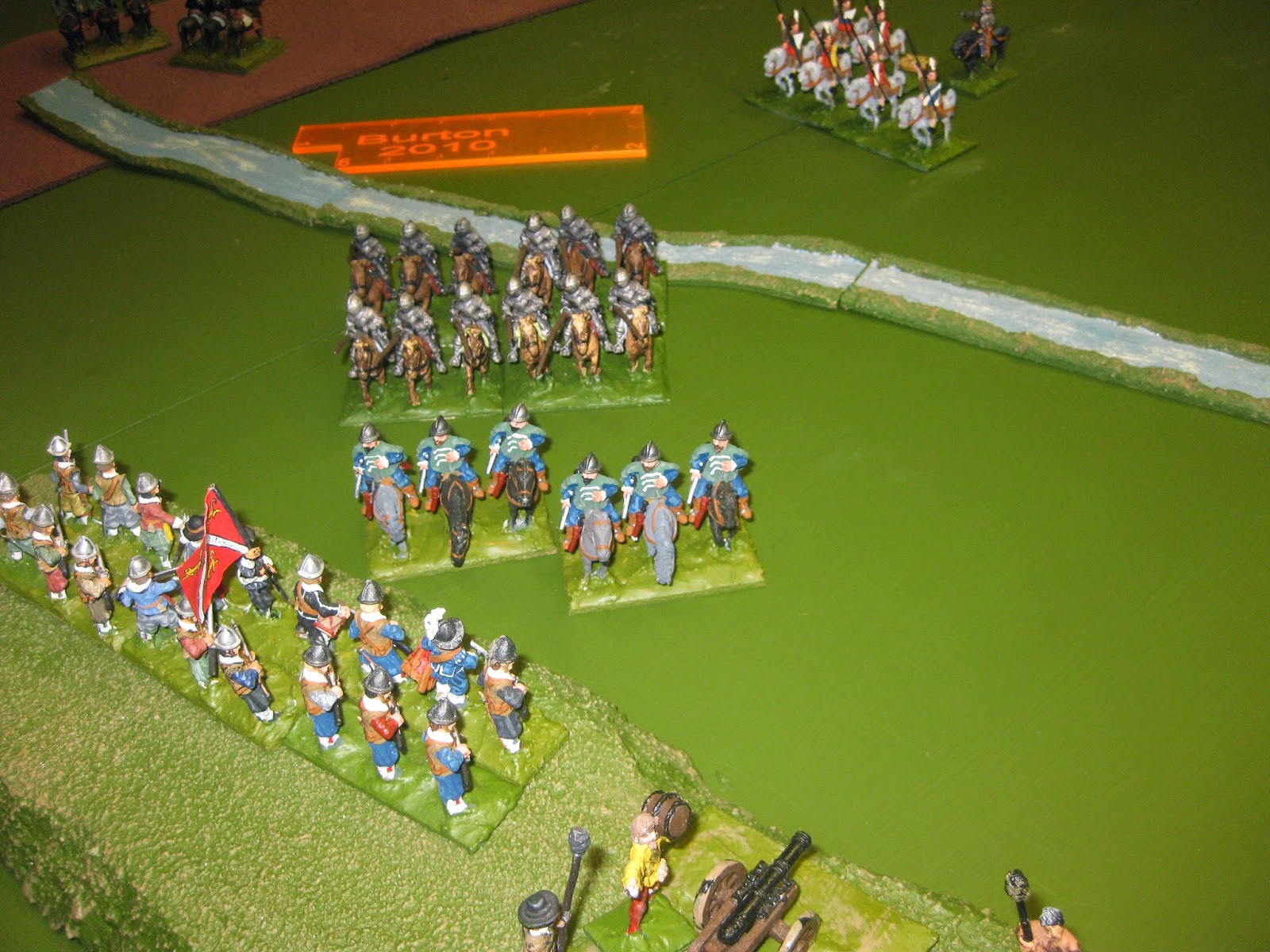 It looks bad on the other side. My dragoons have lost a base, but this is them evading out of the way of the lancers. 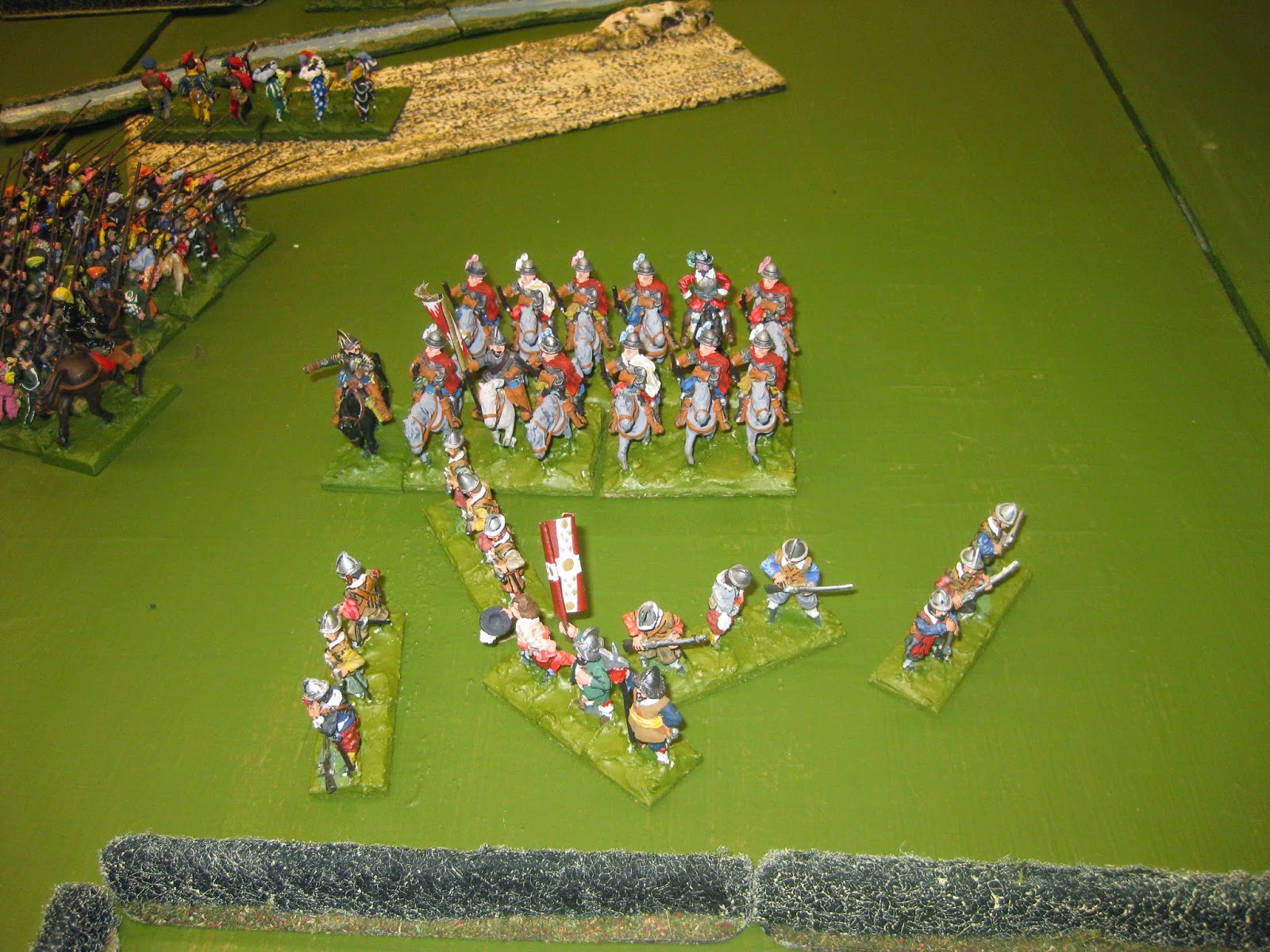 These are my arquebusiers being routed. 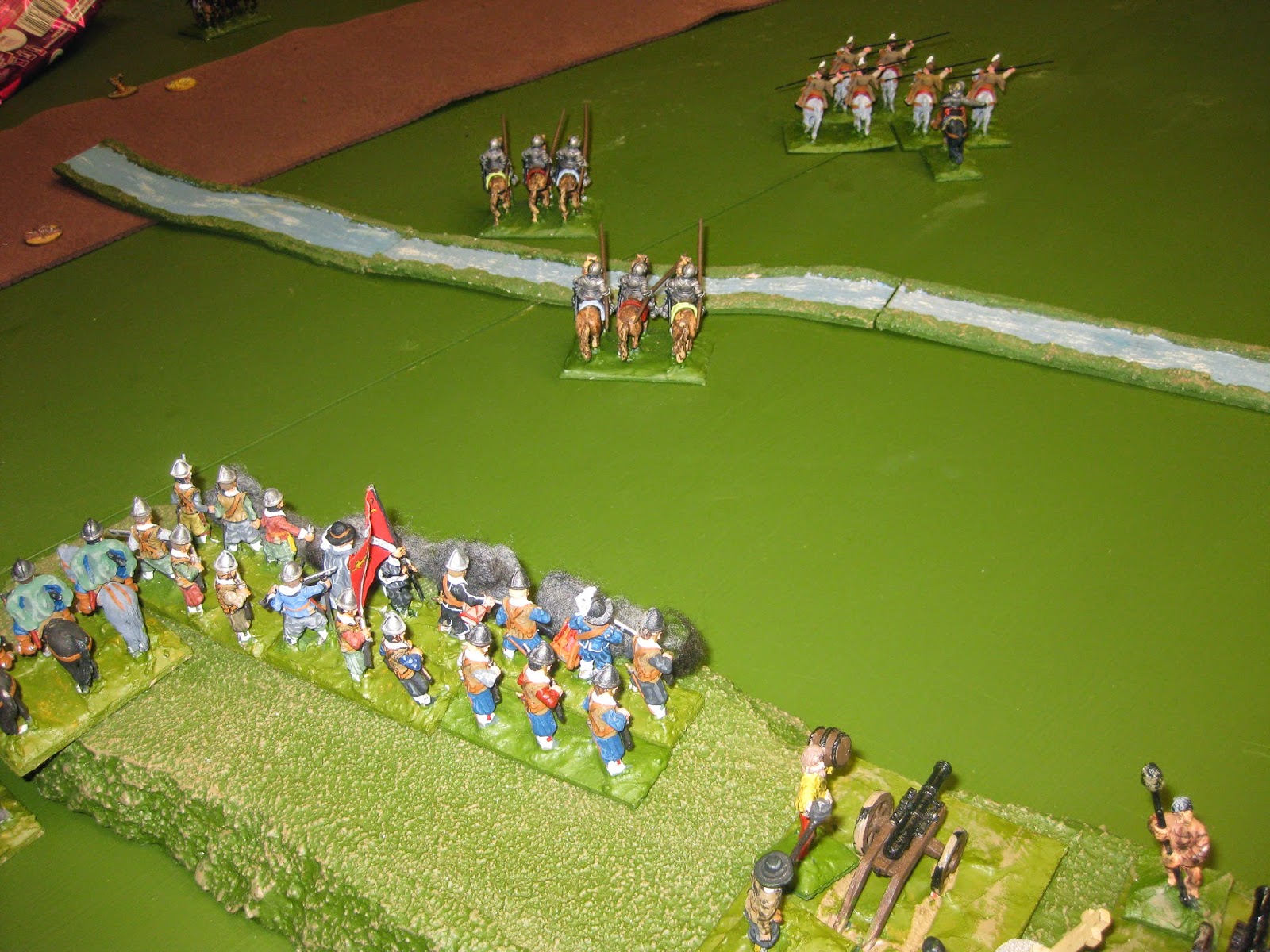 Having evaded with my Dragoons the lancers squared up to charge my arquebusiers on the hill. One round of shooting by the Huguenot foot was enough to break the lancers, avenging their colleagues on the right wing. 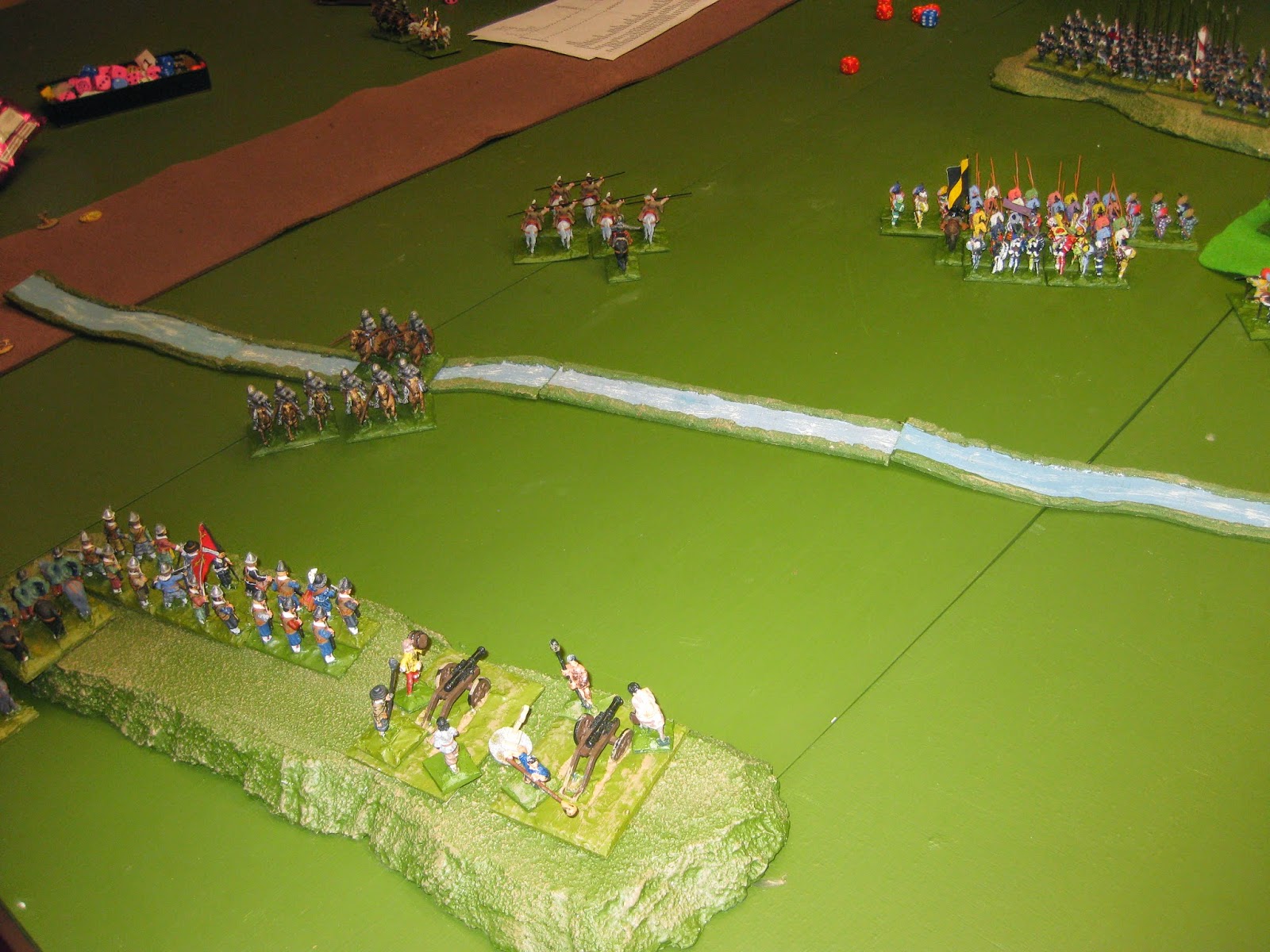 Whilst this was going on you can see a unit of my landsknechts is closing on the other Tercio which has moved onto the hill. This is a massive bluff as there's no way I'm going to attack a larger, better quality, unit with uphill advantage, but I want the Tercio pinned back on the base line, not turning my centre. 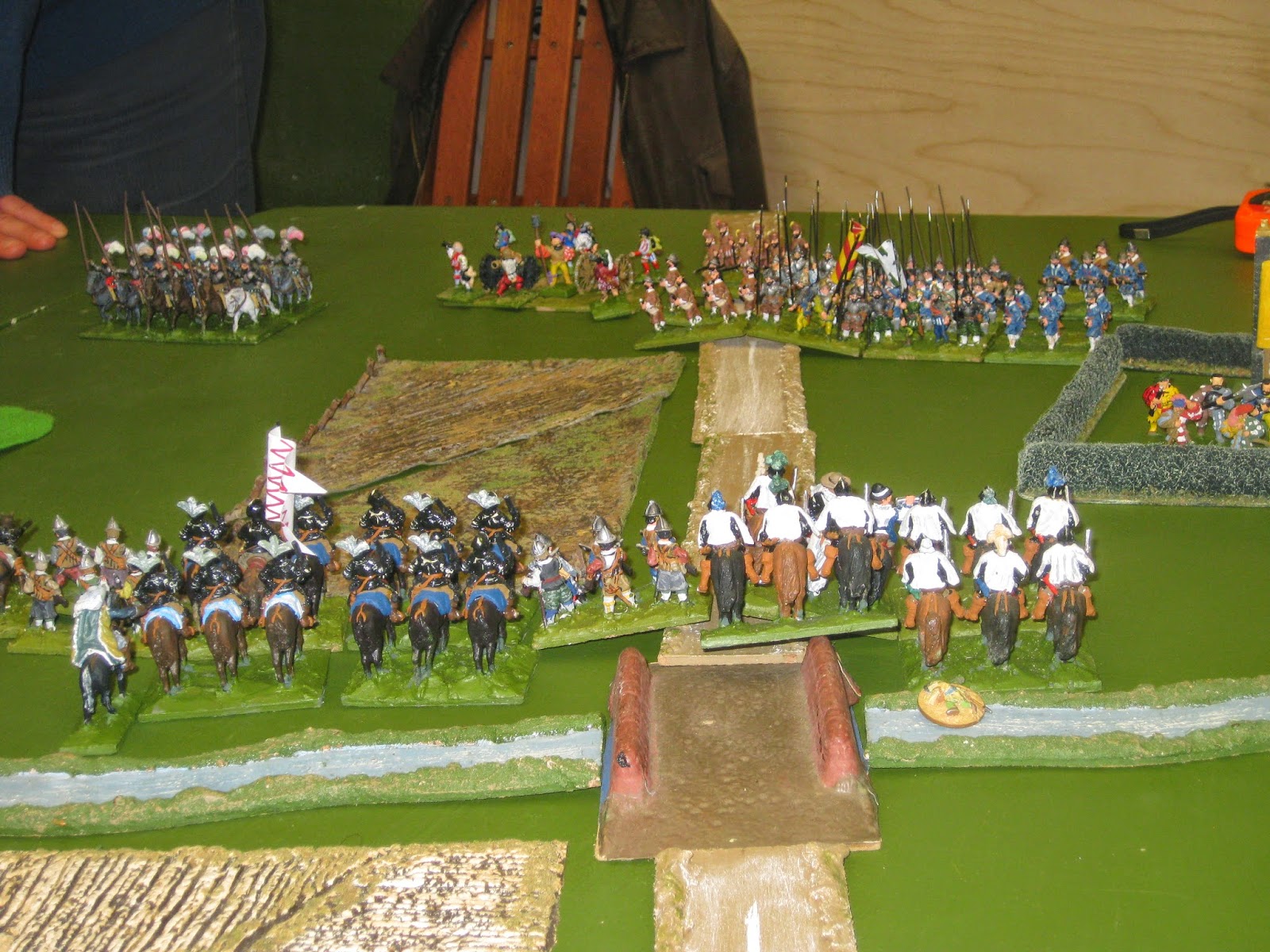 Cavalry in the centre push on, into a hail of shot. Not the gloroius cavalry battle I hoped to see as the Spanish hug their base line. 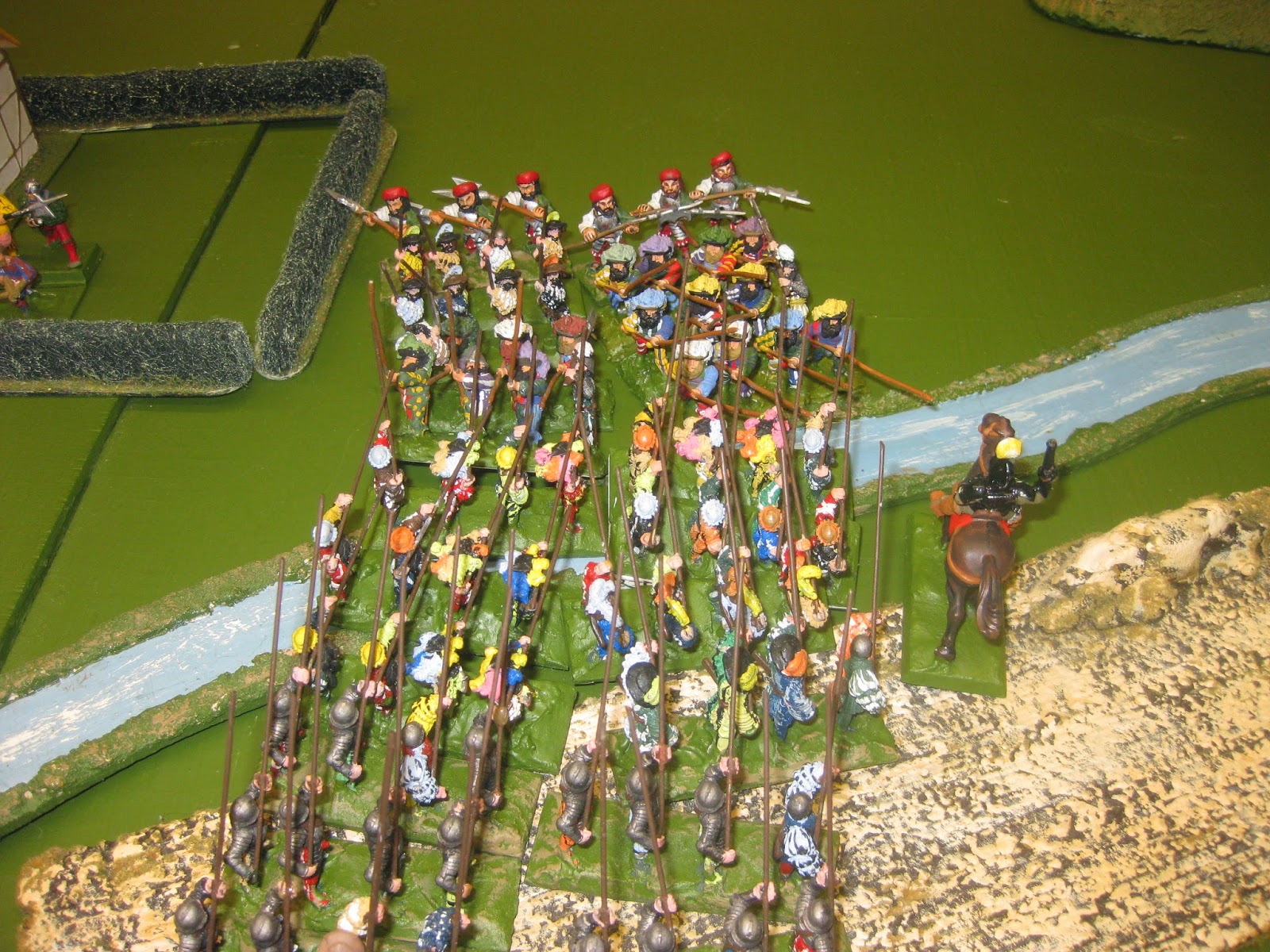 My Swiss finally get to grips with Richard's landsknechts, charging across the stream .This evens things up a bit for Richard (there's an interminable POA calculation that seems to make little difference). My screen of shot has poured four rounds of fire into Richard's men, all to no effect. 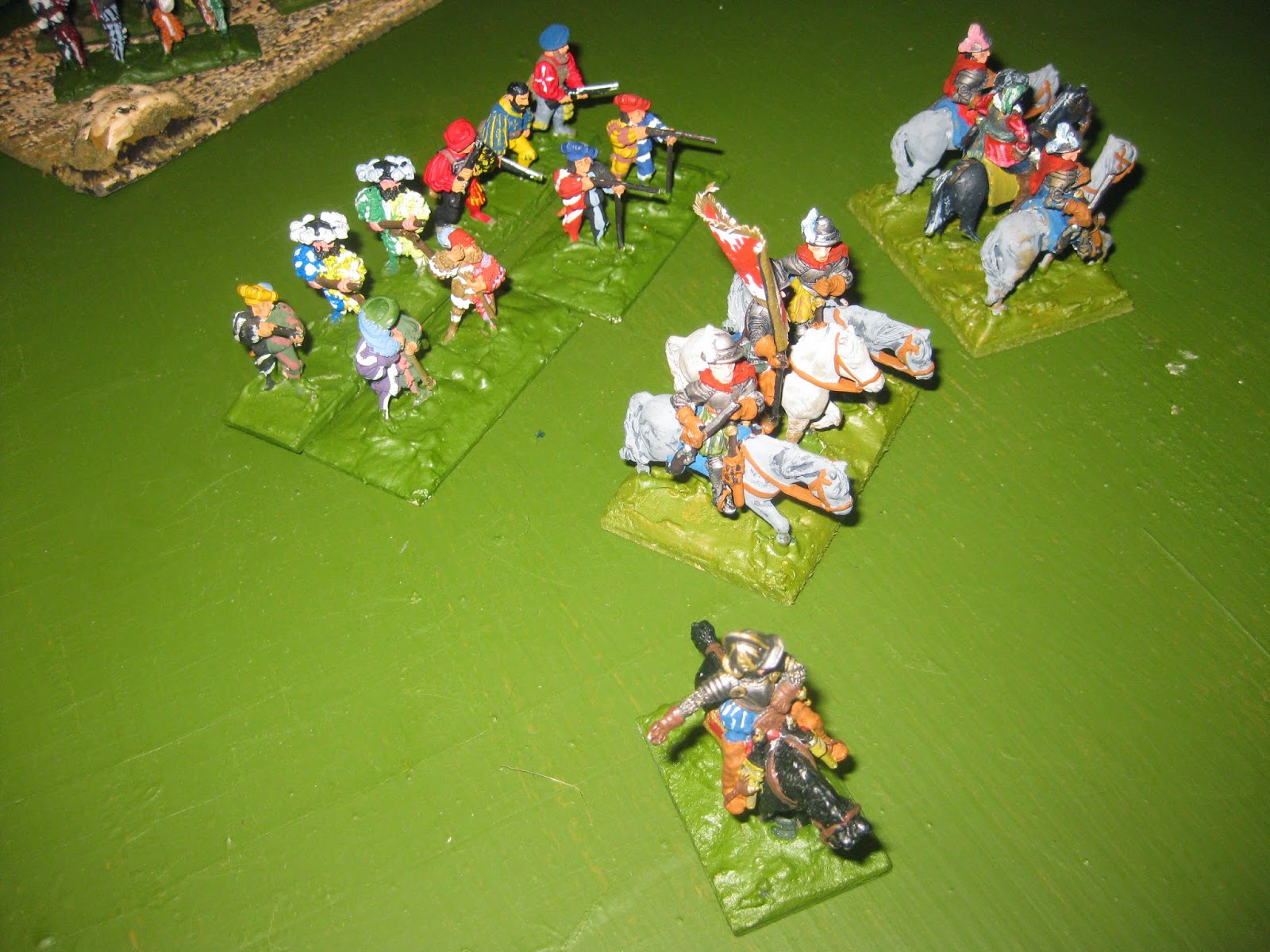 However, they retire back through the Swiss and turn on those pesky Hargaultiers, giving them a volley and roughing them up in hand to hand causing them to rout.

The game is close to being called at this point. We're nearing midnight and we've been playing for just over three hours. We had a slow start as we were learning the system, so we didn't reach the denouement. The Swiss had fought three rounds against the landsknechts and had them close to breaking. I'd lost my left hand reiter unit, but was squaring up to give the Burgundians a thrashing. With the Spanish right wing cavalry in rout I would be able to bring up my arquebusiers to support the landsknects. Together with my artillery the Tercio facing them would be in for a hot time.

I enjoyed the game a lot. Whether it's the rules or just the joy of getting out lots of old friends I'm not sure. The game looked right and a lot of it played well. Phil's left me the rules. We'll be doing this again.

* Like he was ever going to be offered the Huguenots
Posted by Trebian at 19:59