Another game in my attempt to refight most of the ECW, just not in the right order. This time I chose Nantwich, fought in January 1644 between the forces of Parliament lead by Sir Thomas Fairfax and John Lambert and those of the King, lead by Lord Byron.

Normally I rely on Richard Brooks' "Battlefields of Britain and Ireland" but on this occasion he was more interested in the bigger picture surrounding the overall siege of Nantwich by the Royalists than the main clash of arms. As the battle was fought in the middle of winter a flash-thaw of the River Weaver split Byron's army and trapped his cavalry on the other side of Nantwich. Fairfax blocked these with a small force of cavalry and infantry and then destroyed the Royalist infantry who were formed up near Acton church. Richard is very good on the manoeuvring, less so on the fighting.

Luckily for me I found a good wargaming description of the battle in an old magazine from 1978, written by Stuart Asquith, so I followed that instead.

The Parliamentarians were played by Chris W, and Phil ran the Royalists after I'd handled them for a couple of moves. The pictures this time are taken with my Canon SLR, using a 70-300mm zoom or a 50mm with a super-wide angle attachment.

First some pictures of the set up. 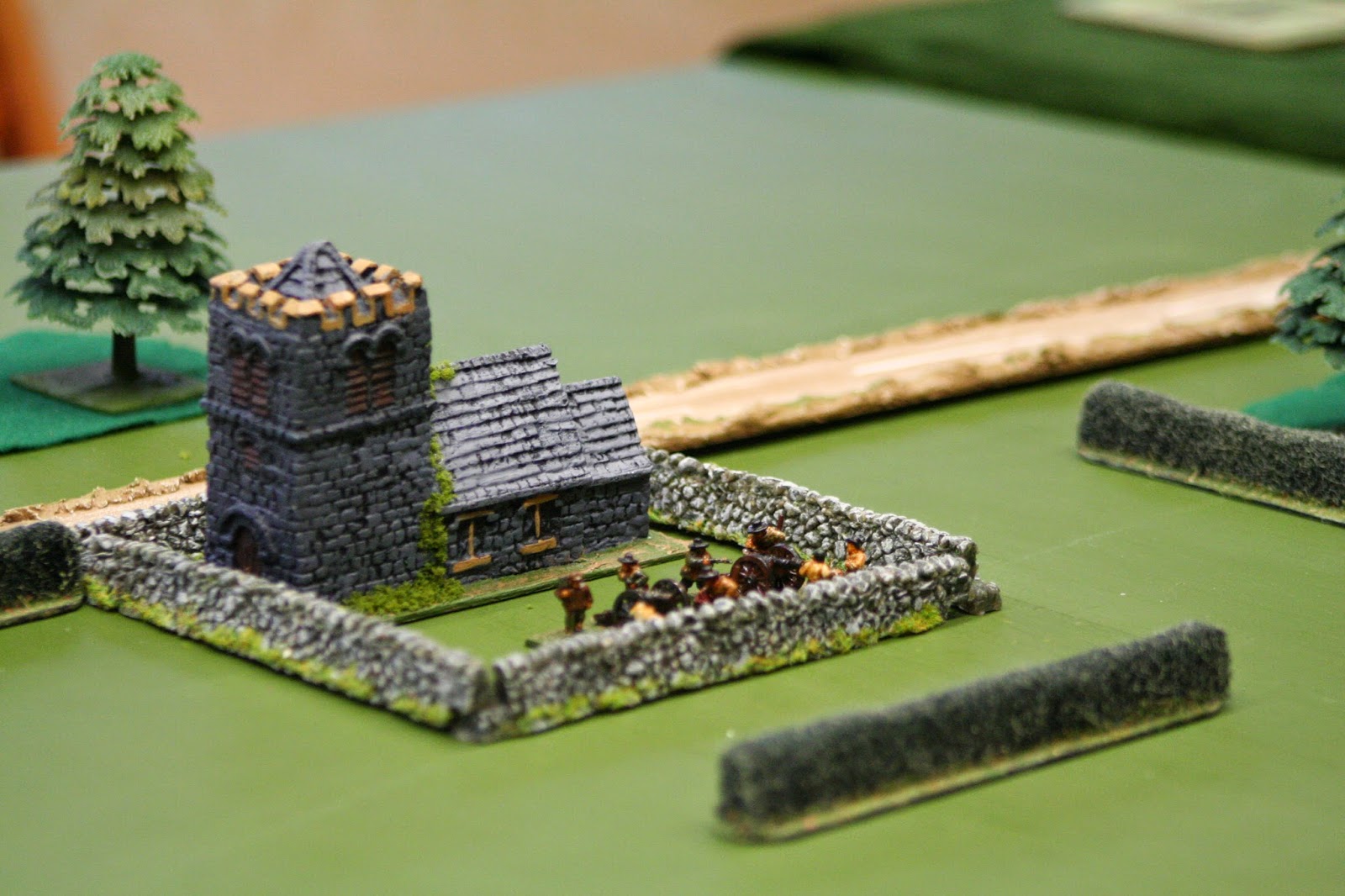 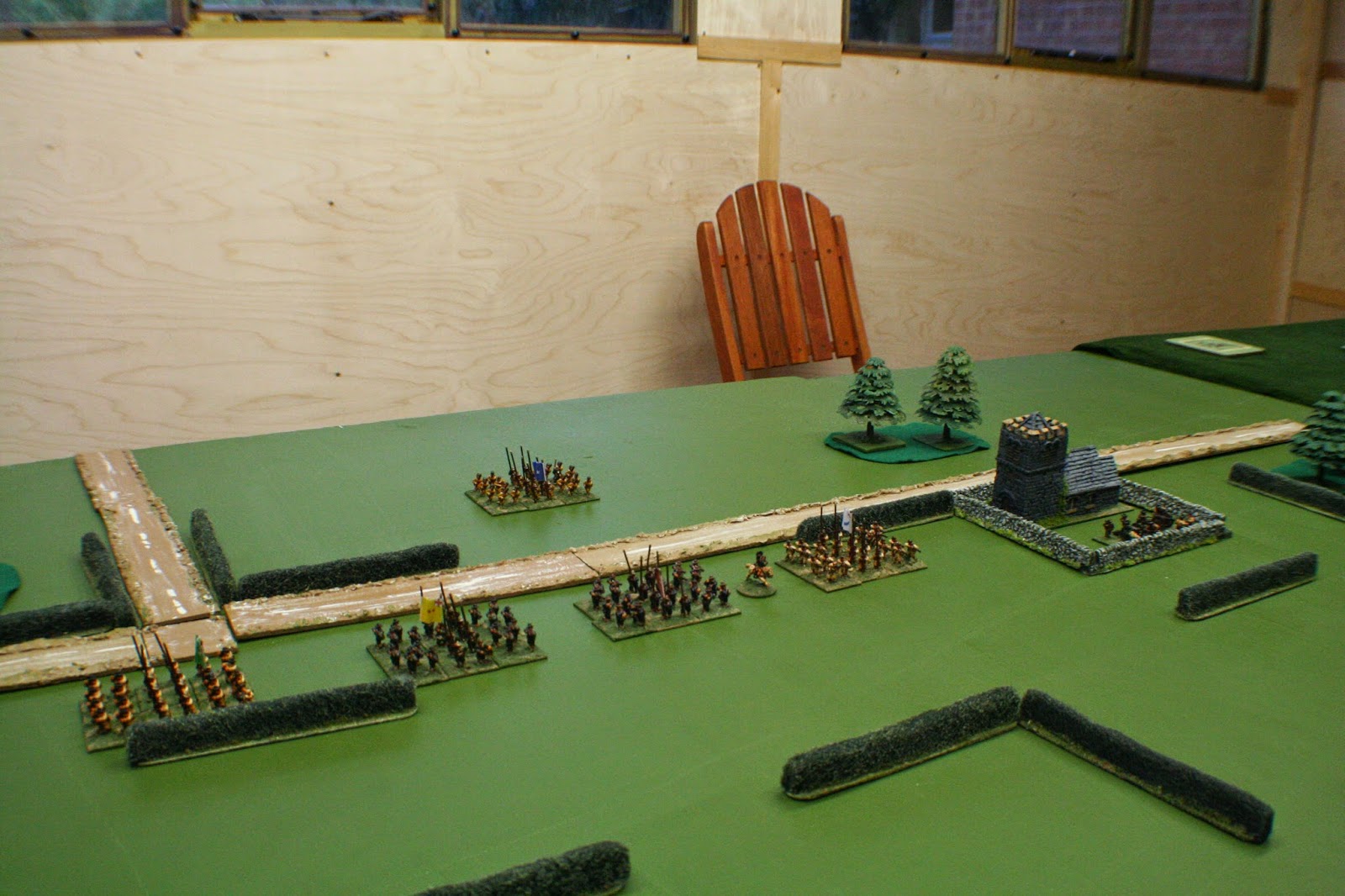 The Royalist position. Five infantry regiments. One is in reserve as a guard against troops sallying out of Nantwich. 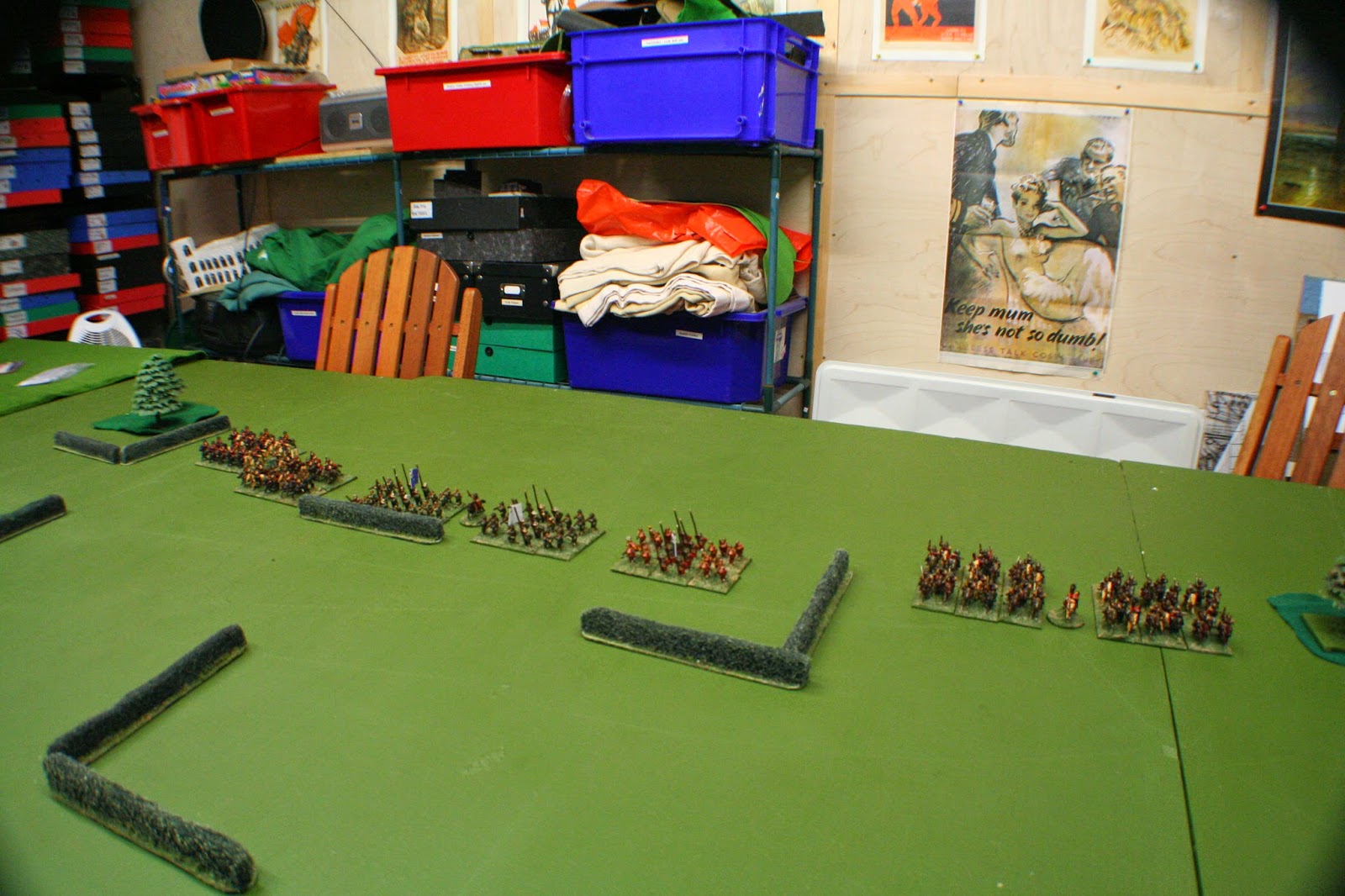 The forces of Parliament. Three cavalry and infantry units and one of dragoons. The dragoons are on the far left of the picture, facing off against the church. 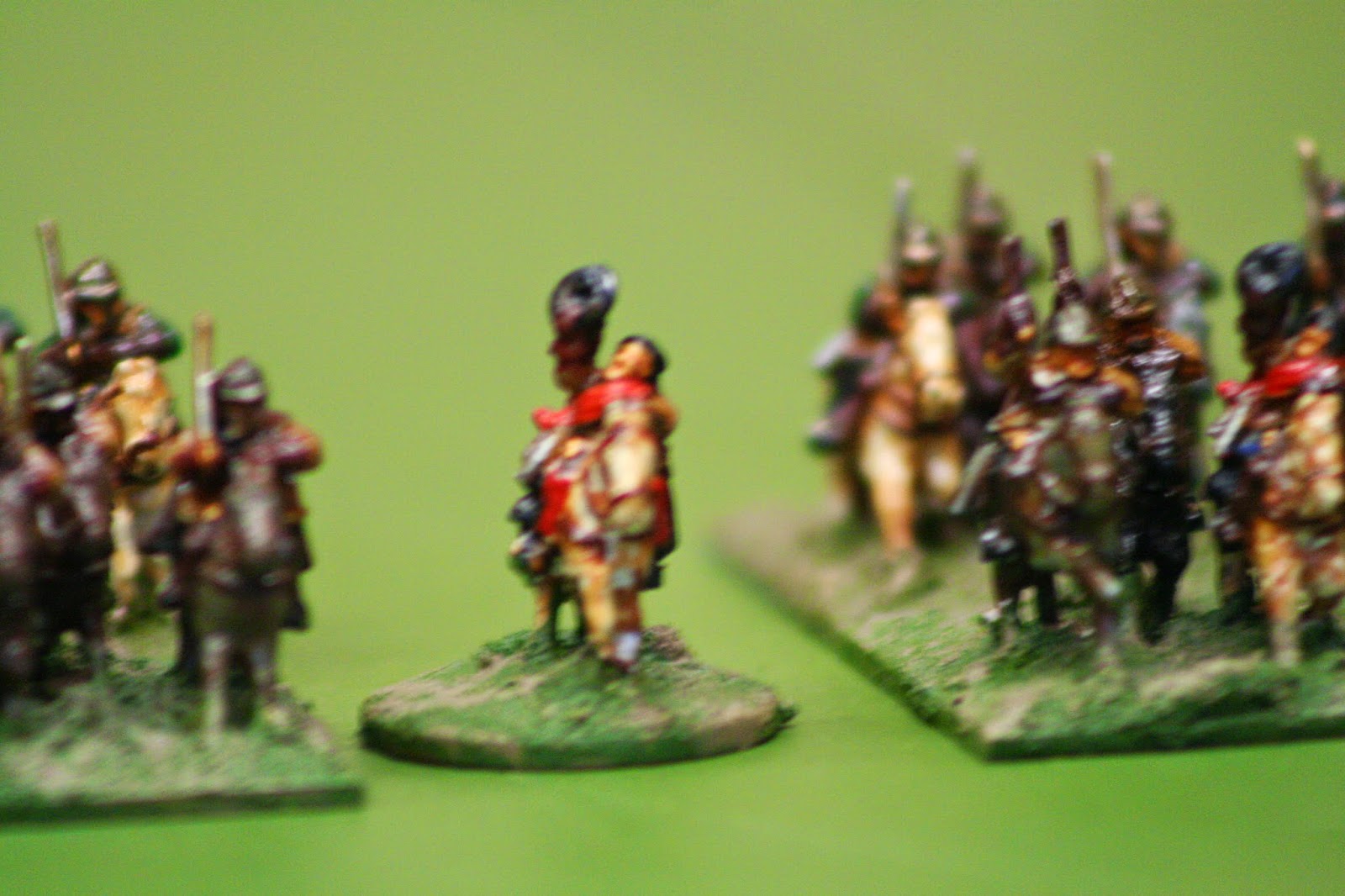 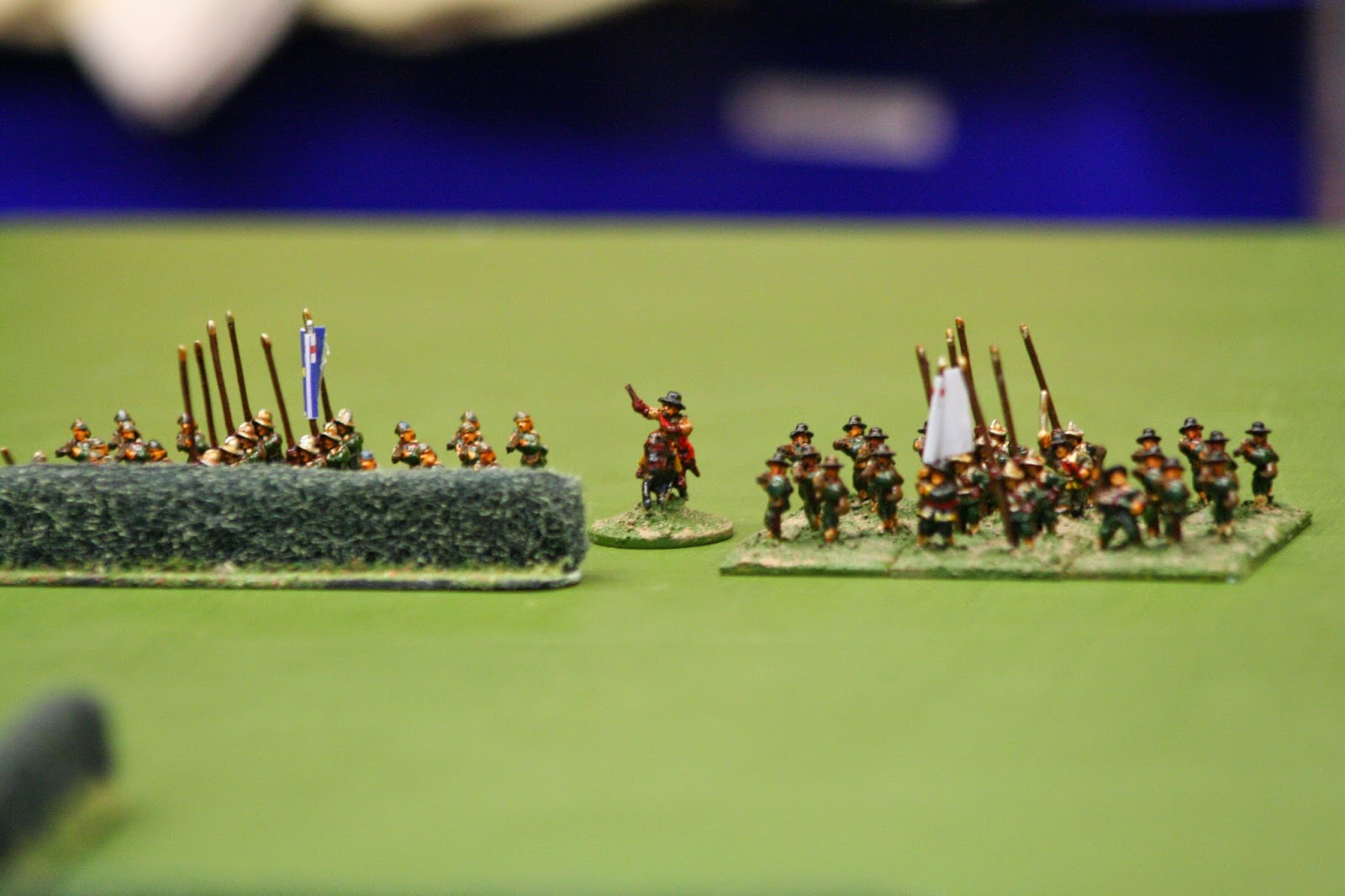 Colonel Gibbons takes command of the Royalist army as Byron has got himself stranded elsewhere. 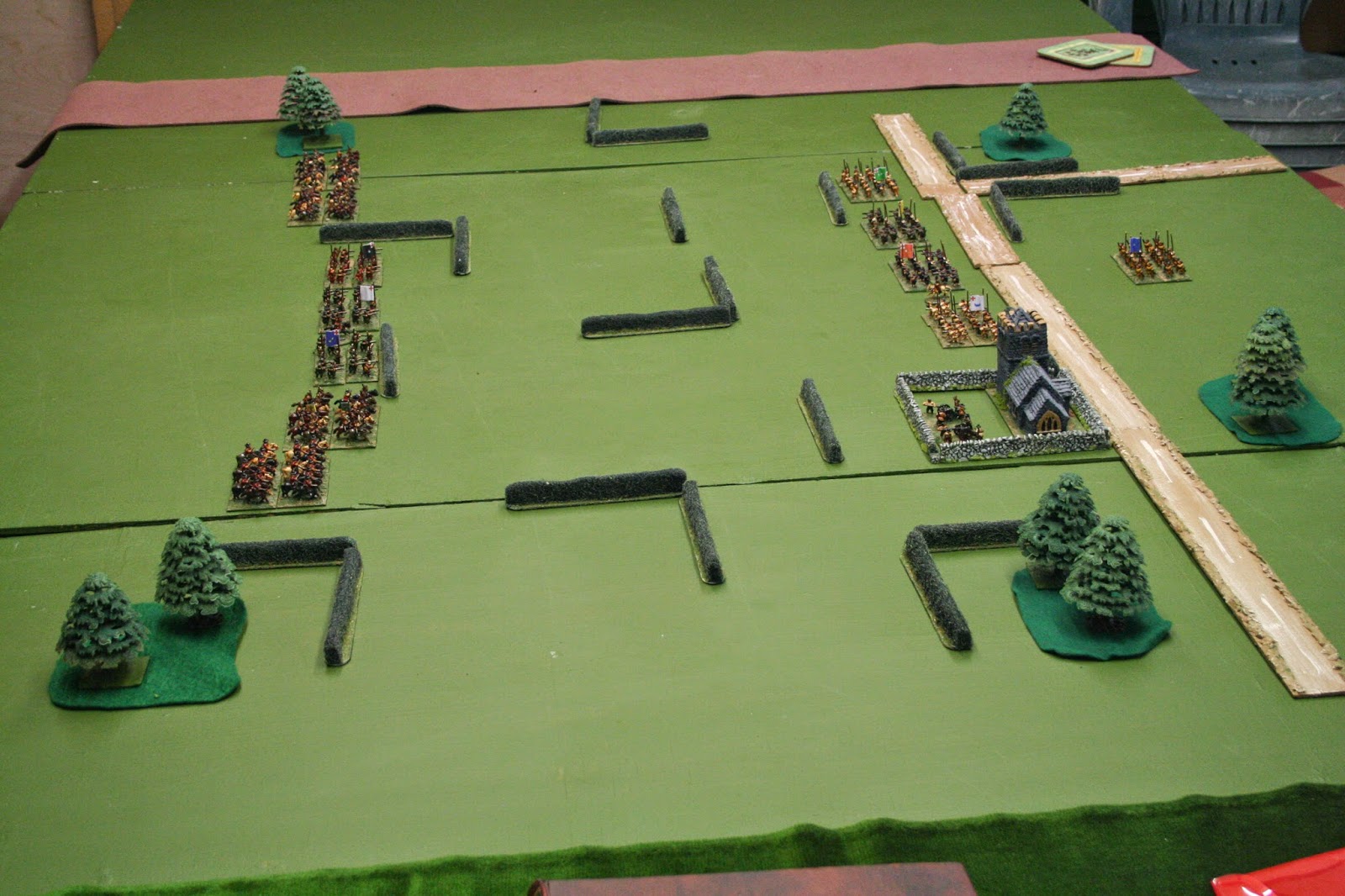 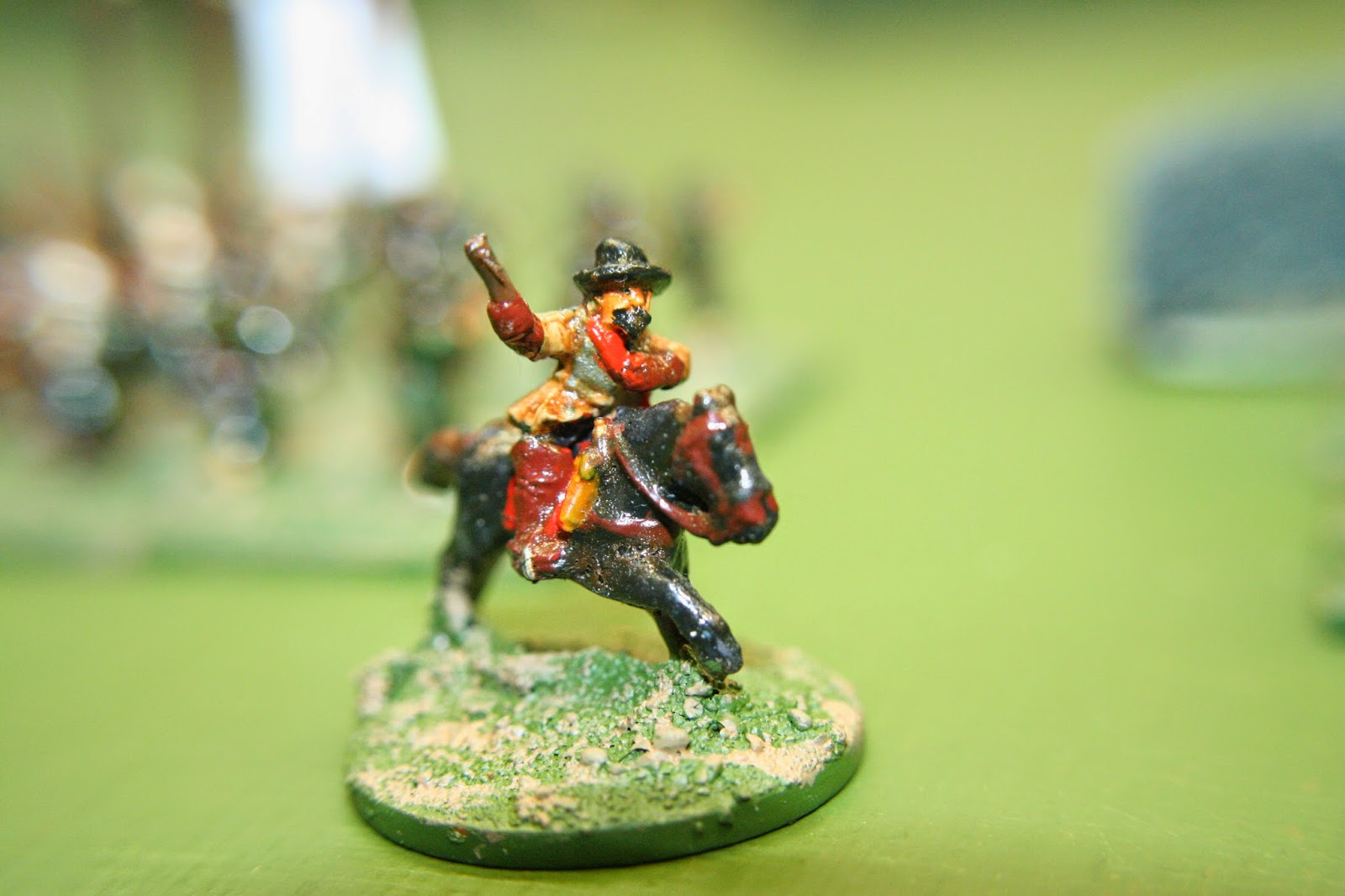 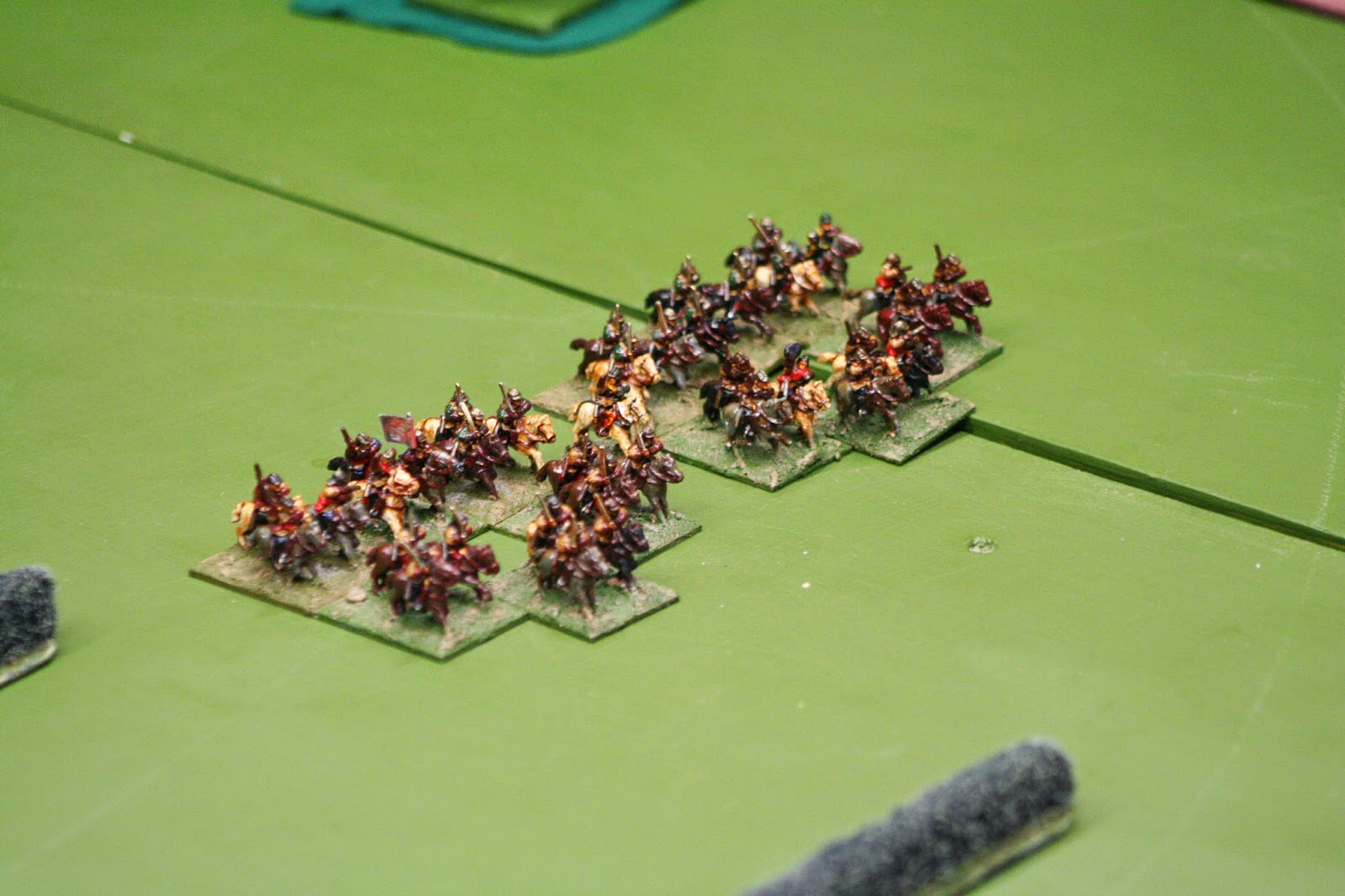 Parliament starts with an aggressive move forward. The middle base is advanced to show the unit is moving. A card needs to be drawn to stop it (unless it bumps into the enemy or terrain). 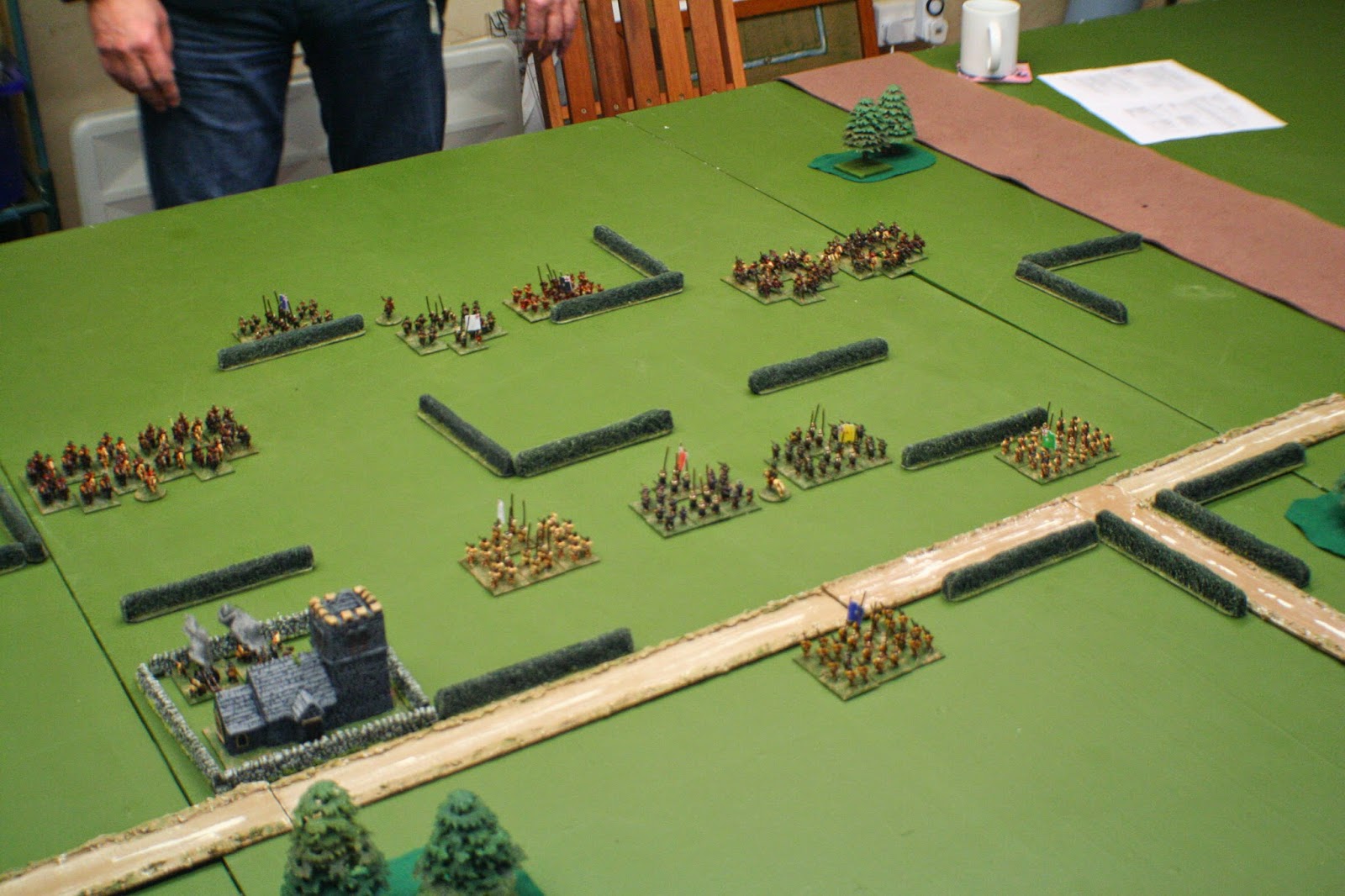 The end of turn one. We've both advanced. Probably unwisely for me as the Royalists. I was intending to occupy the centre of the board and hold the hedge line in the centre. On reflection this was a mistake as it allowed the position to get flanked. 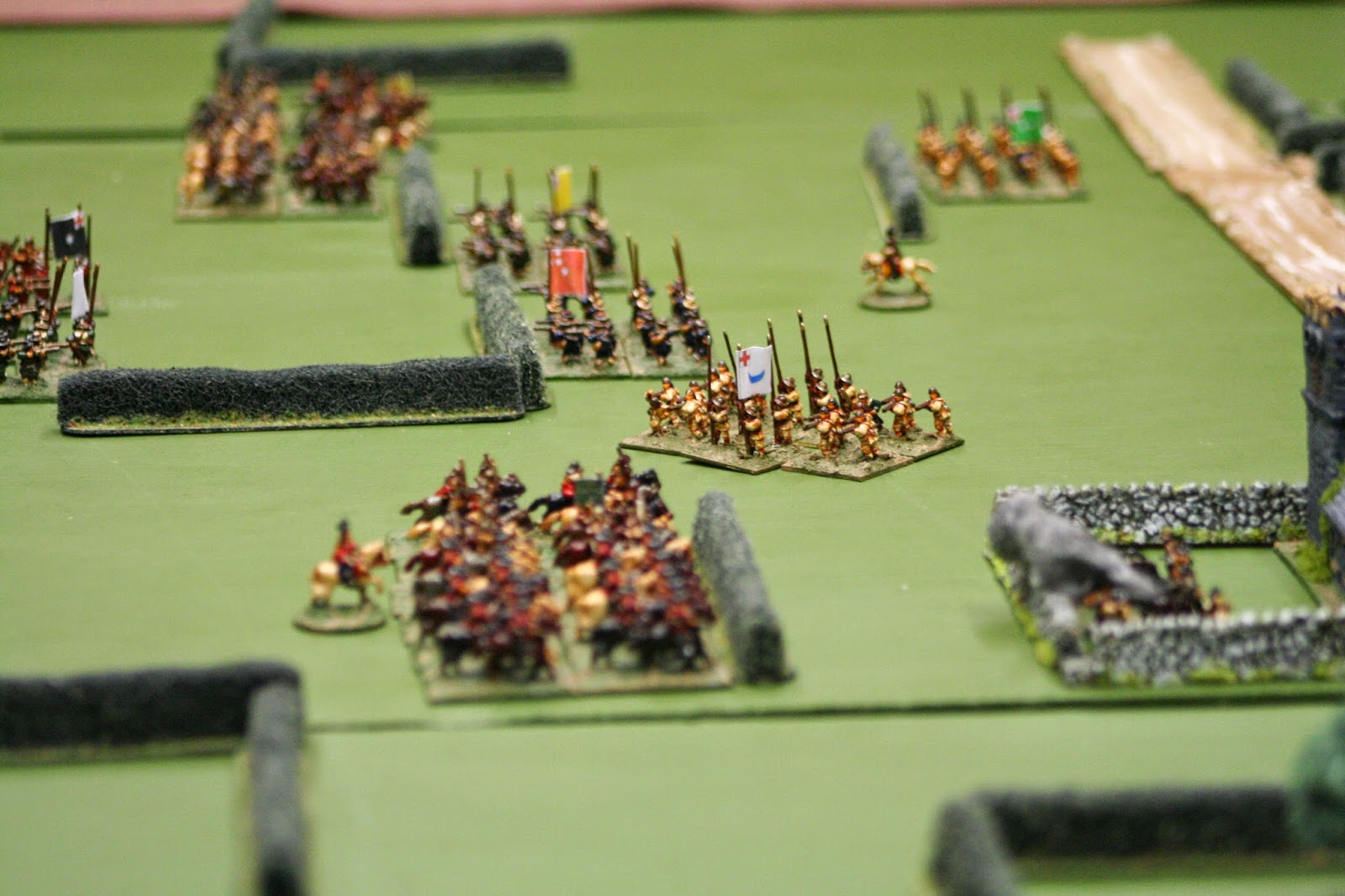 On Parliament's right the dragoons get up to the wall opposite the church yard and take some ineffective fire from the Royalist guns. 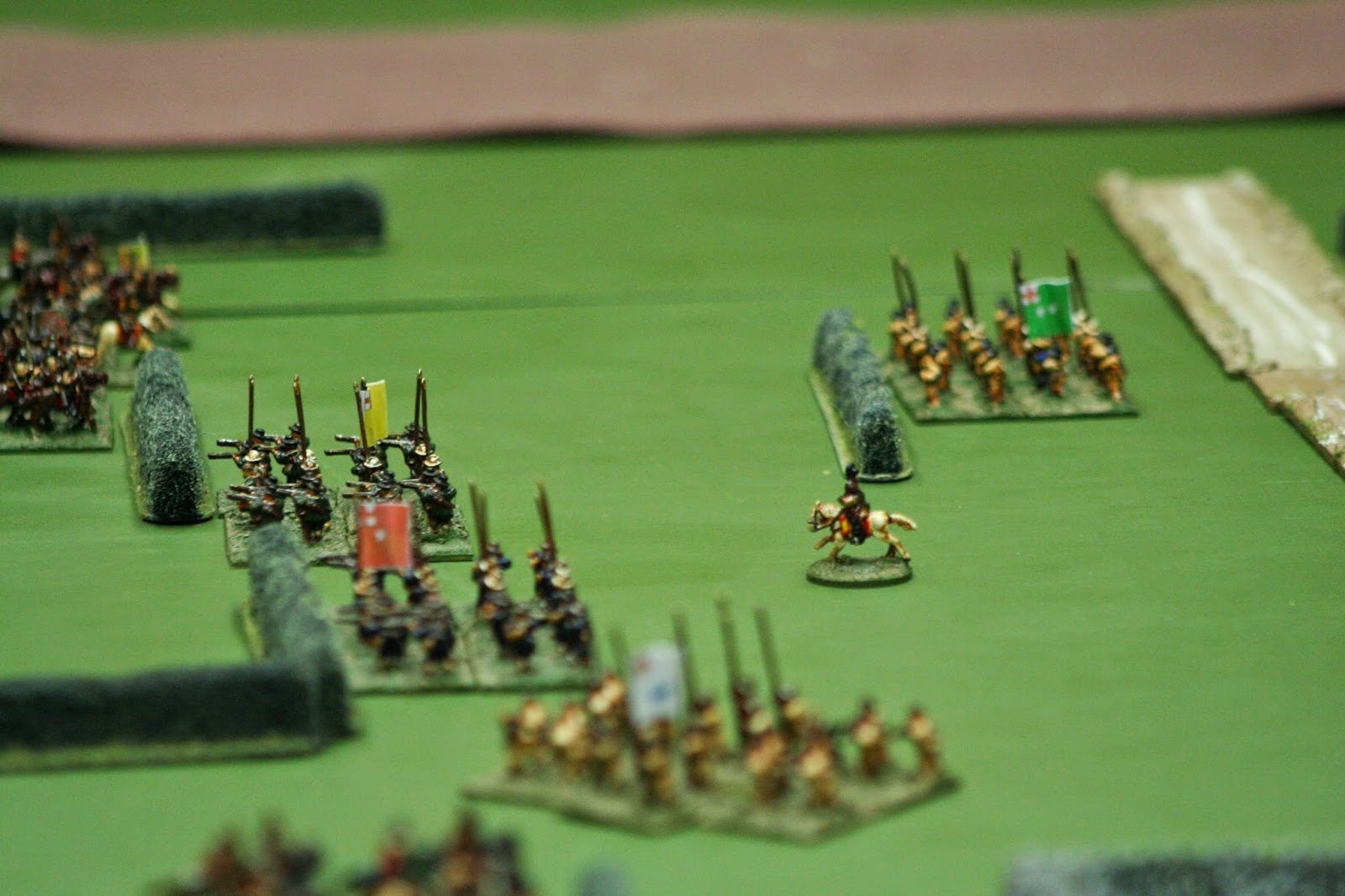 Elsewhere the Royalists get to the hedge line first, but that far end does look exposed. 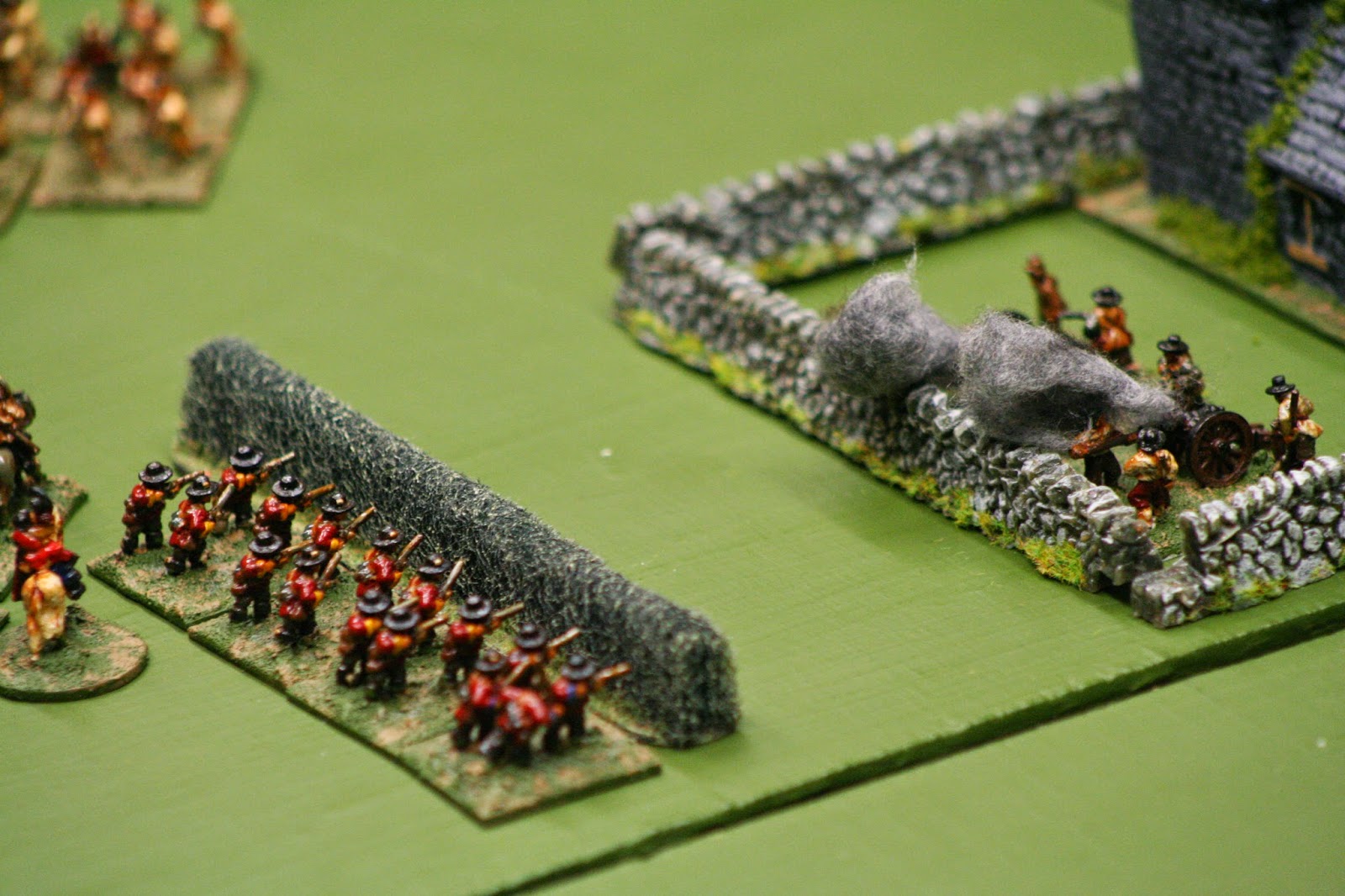 Dismounted dragoons exchange fire with the artillery. Why Chris chose to do this rather than work them round the flank I do not know and he was unable to explain. 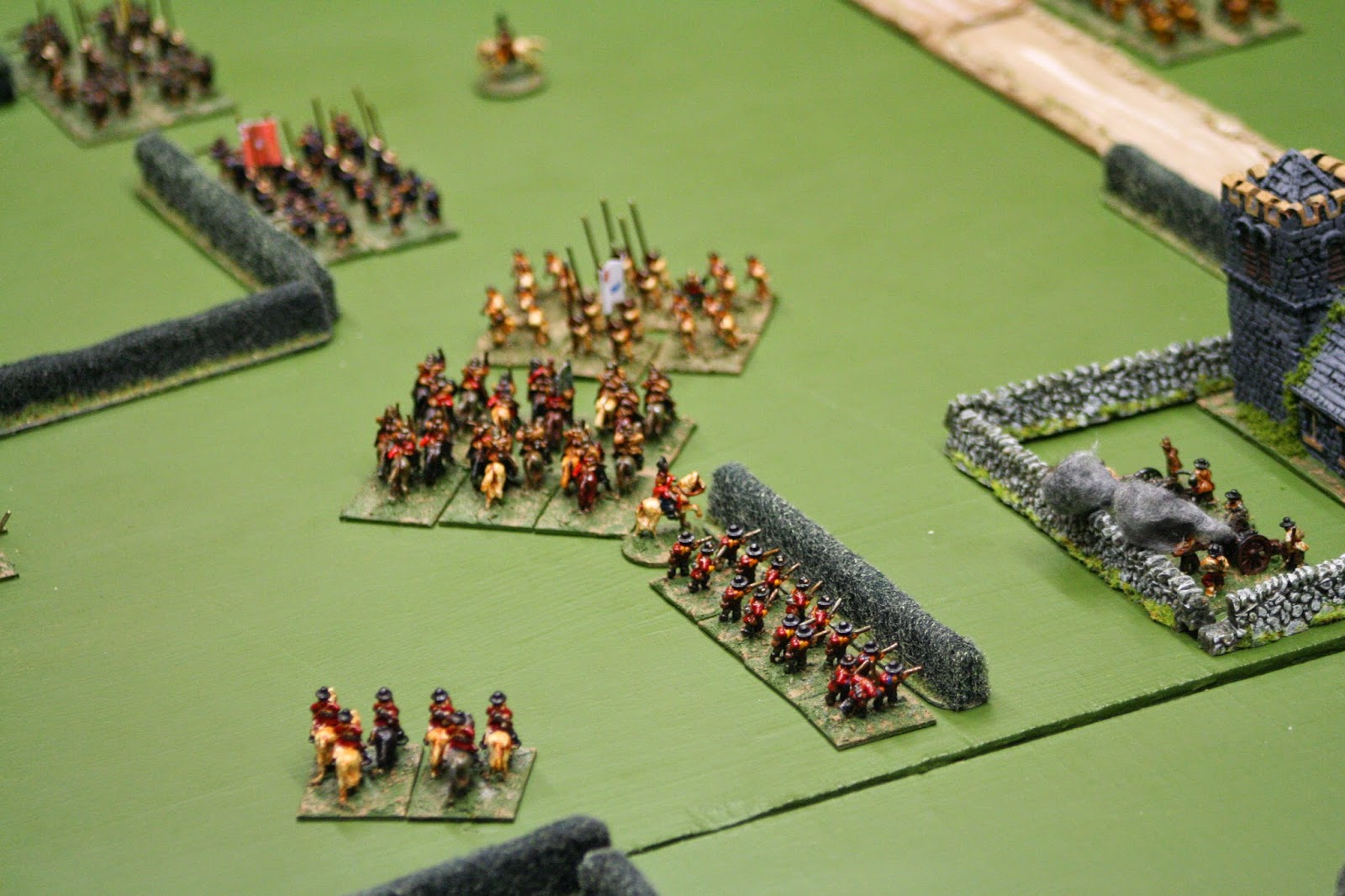 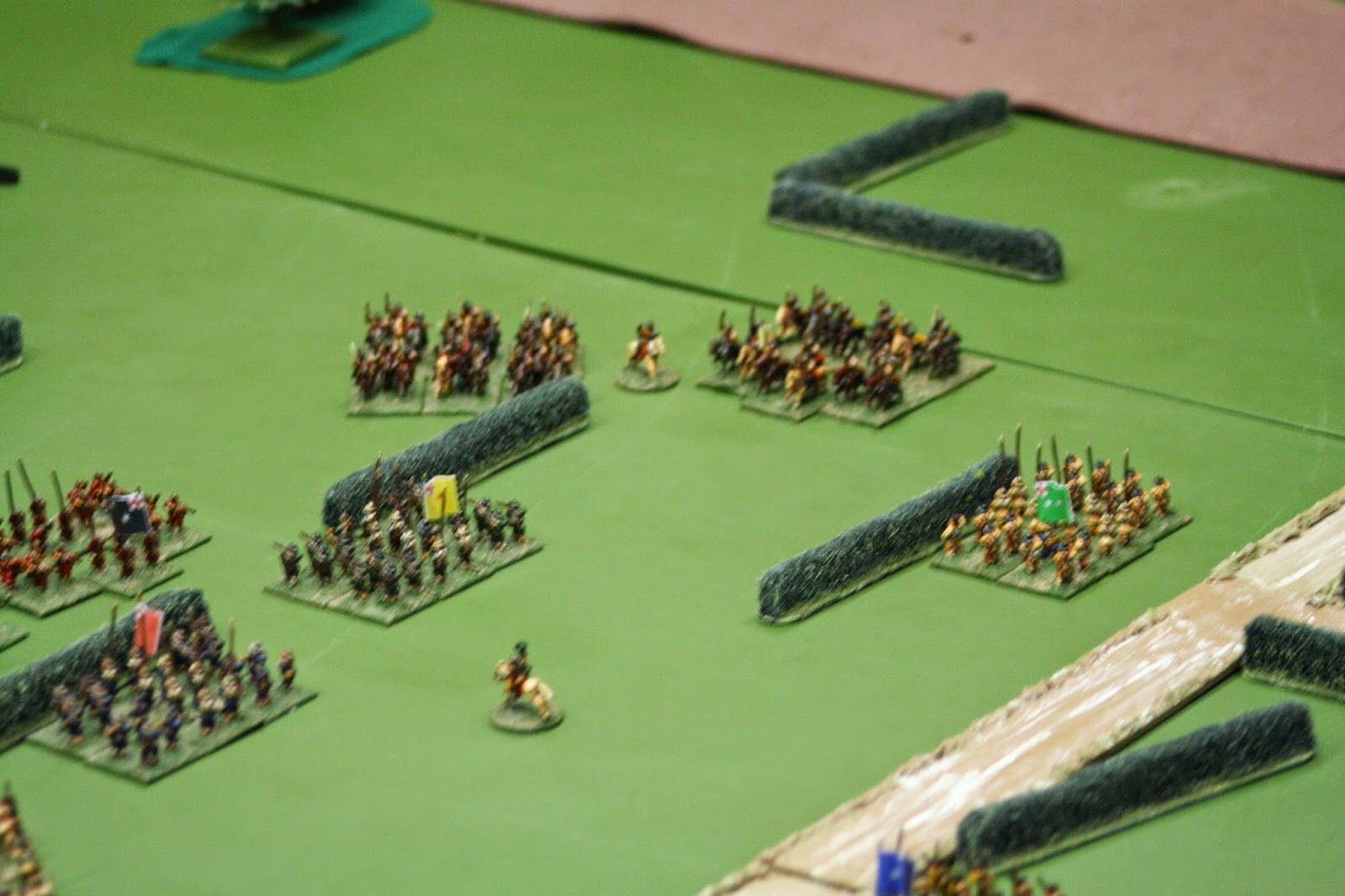 On the other flank the remaining Parliamentarian horse has swung itself round to try to roll up the centre. Only downside is the need to gallop past a formed Royalist foot regiment, ready and willing to hit it with enfilading fire.

(There will now be a brief interlude whilst I run the melee system completely incorrectly and get some stupid outcomes. After doing this three times I realise what I've done and we reset the board and run through it again. Luckily we could all agree what the die rolls were.) 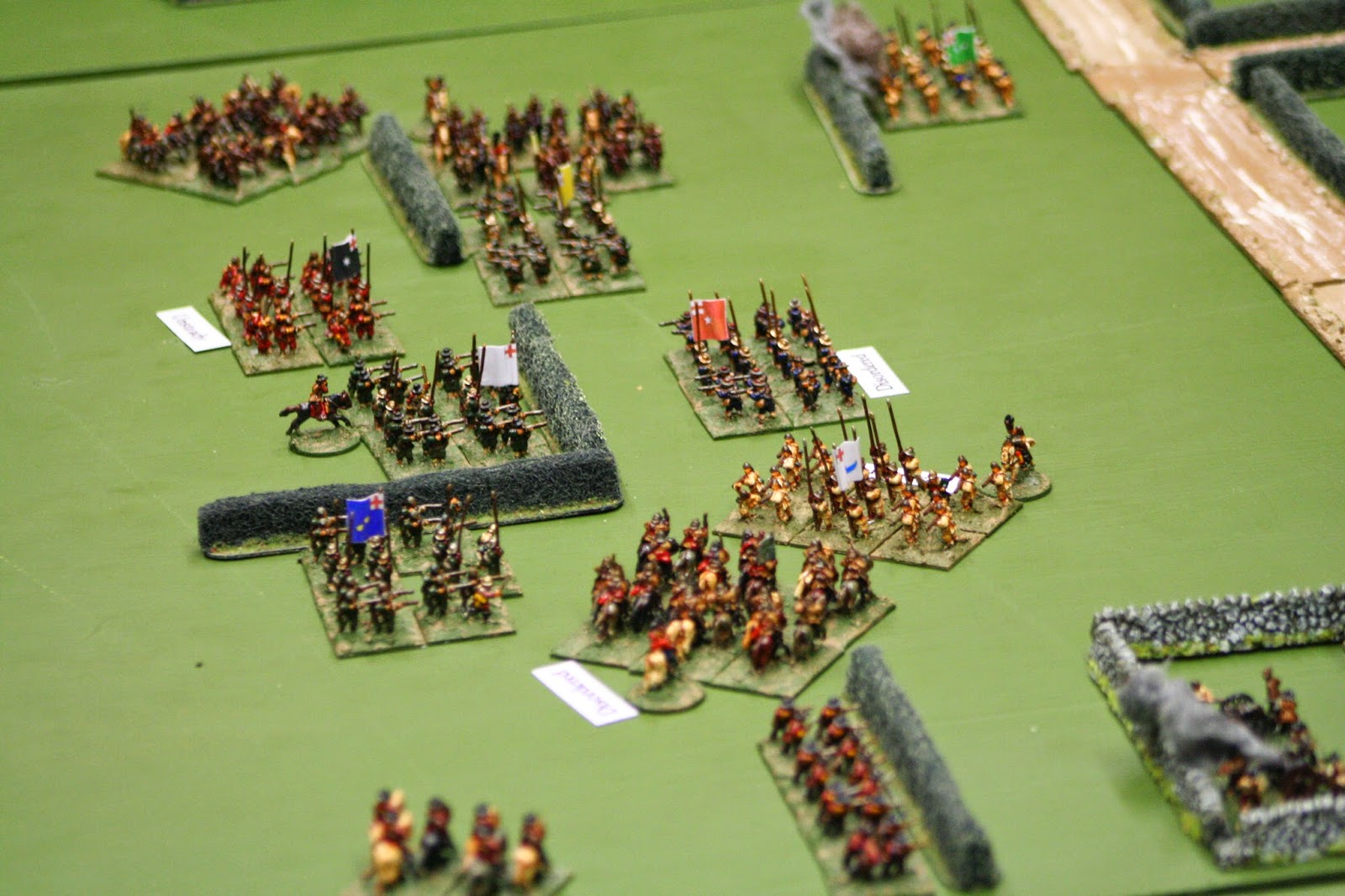 So, with the re-working the left hand Parliamentarian infantry unit had been driven off Unsteady (see white label behind them), but the central unit had gained the hedge line. The cavalry had taken a volley and dropped an organisation level. 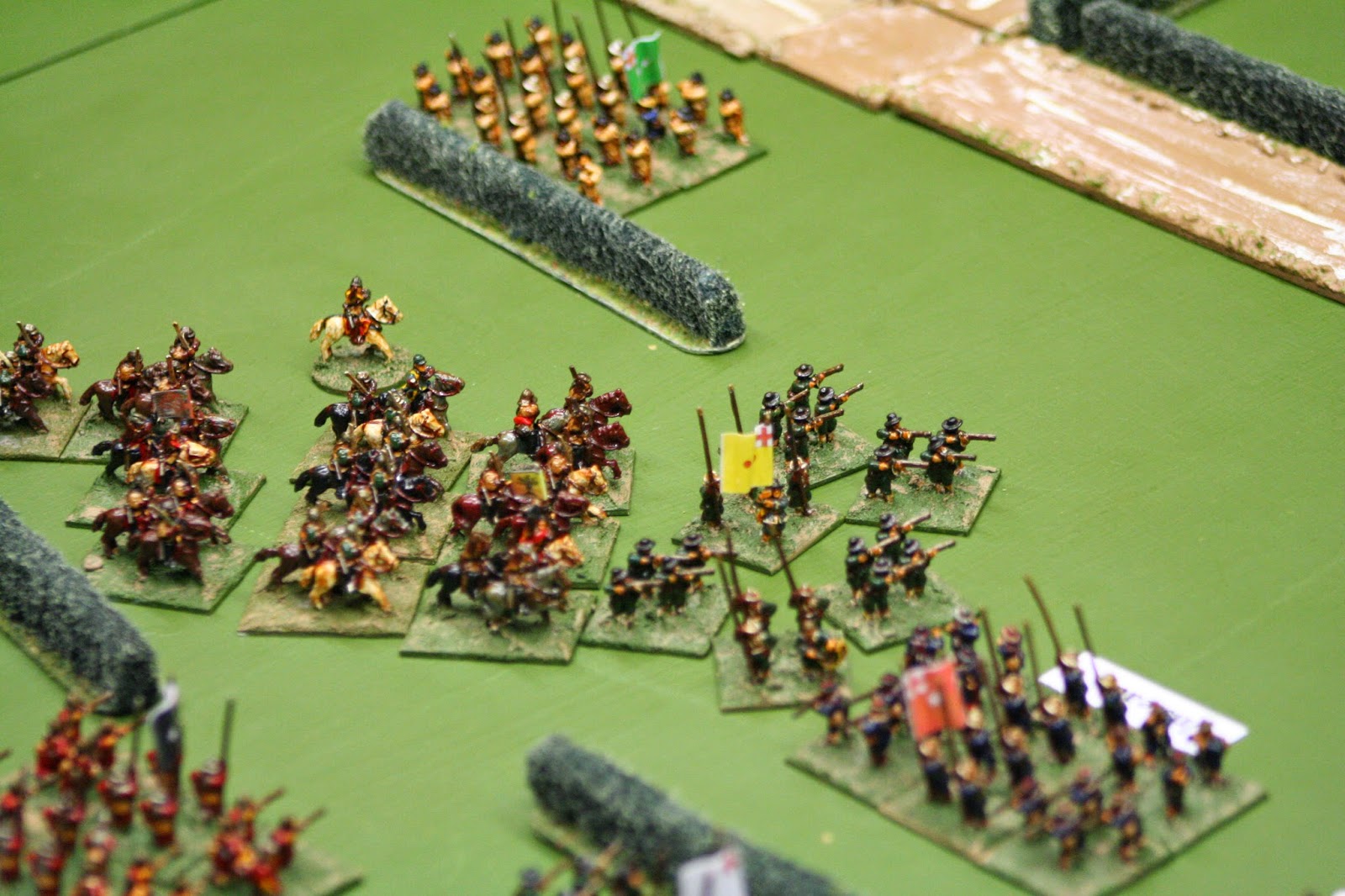 The Parliamentary cavalry delivered a volley of pistol fire into the end Royalist foot regiment, making them unsteady. They then laid in with their swords and broke them. 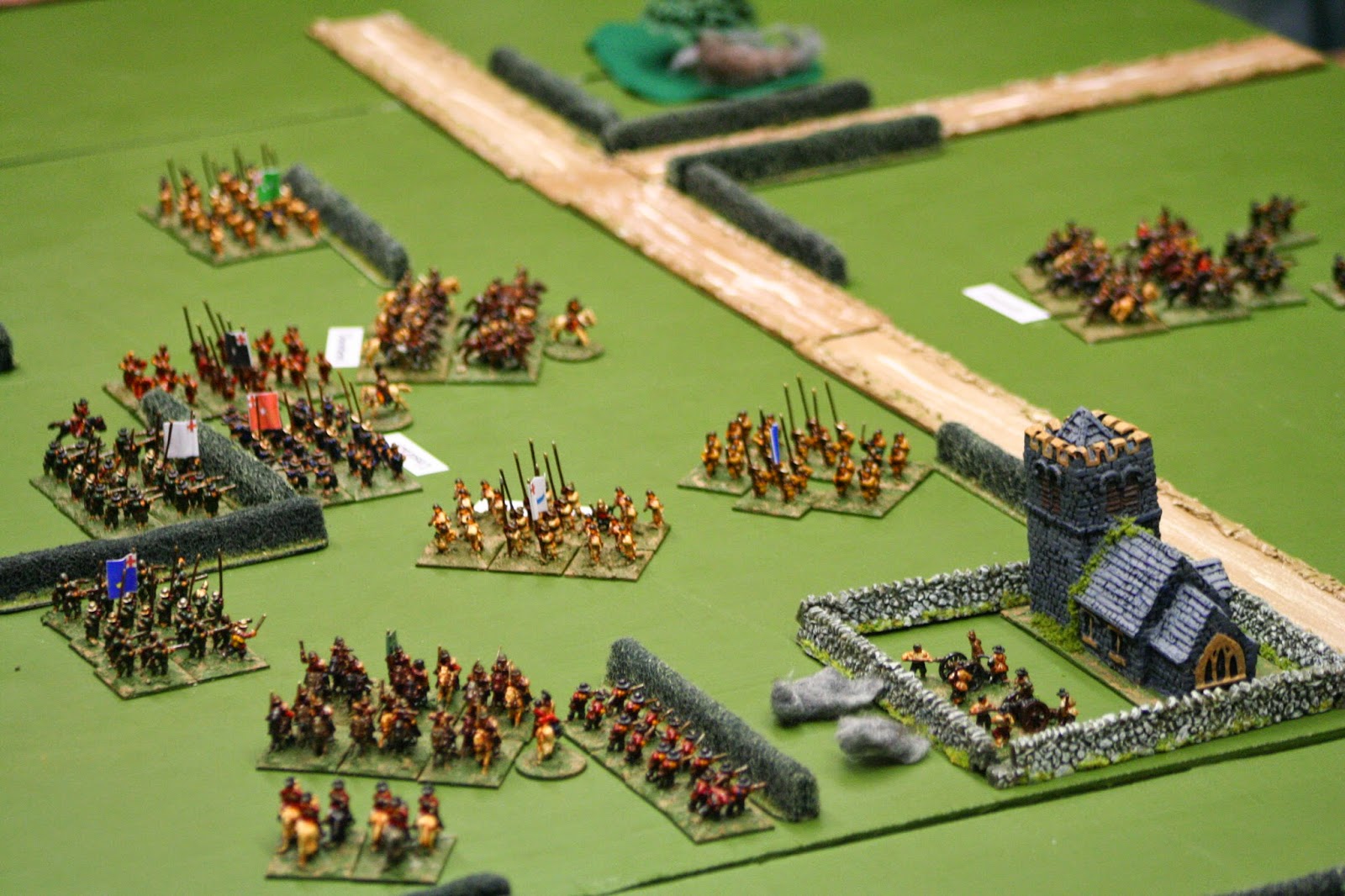 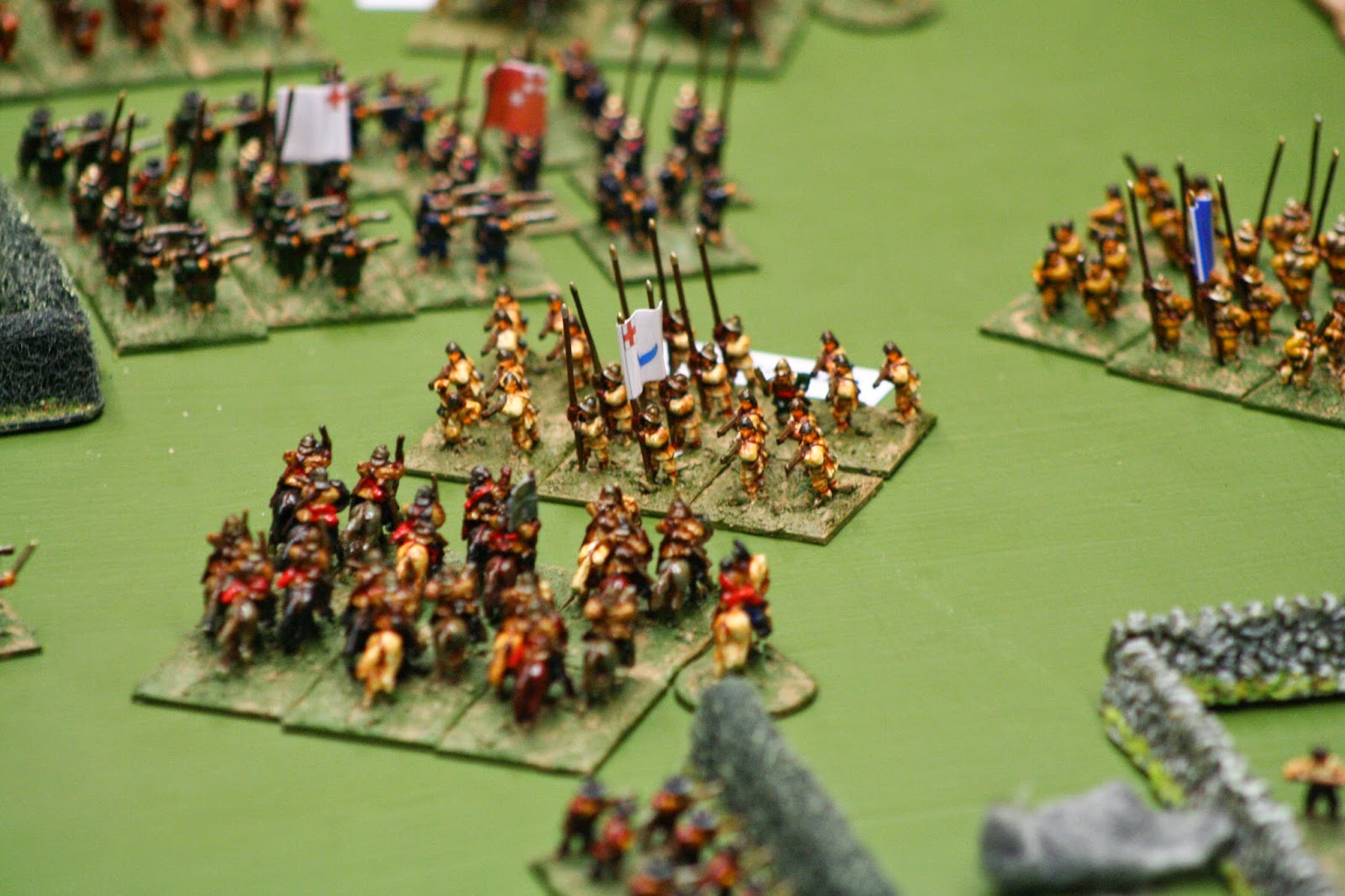 Reformed, the horse charged in again..... 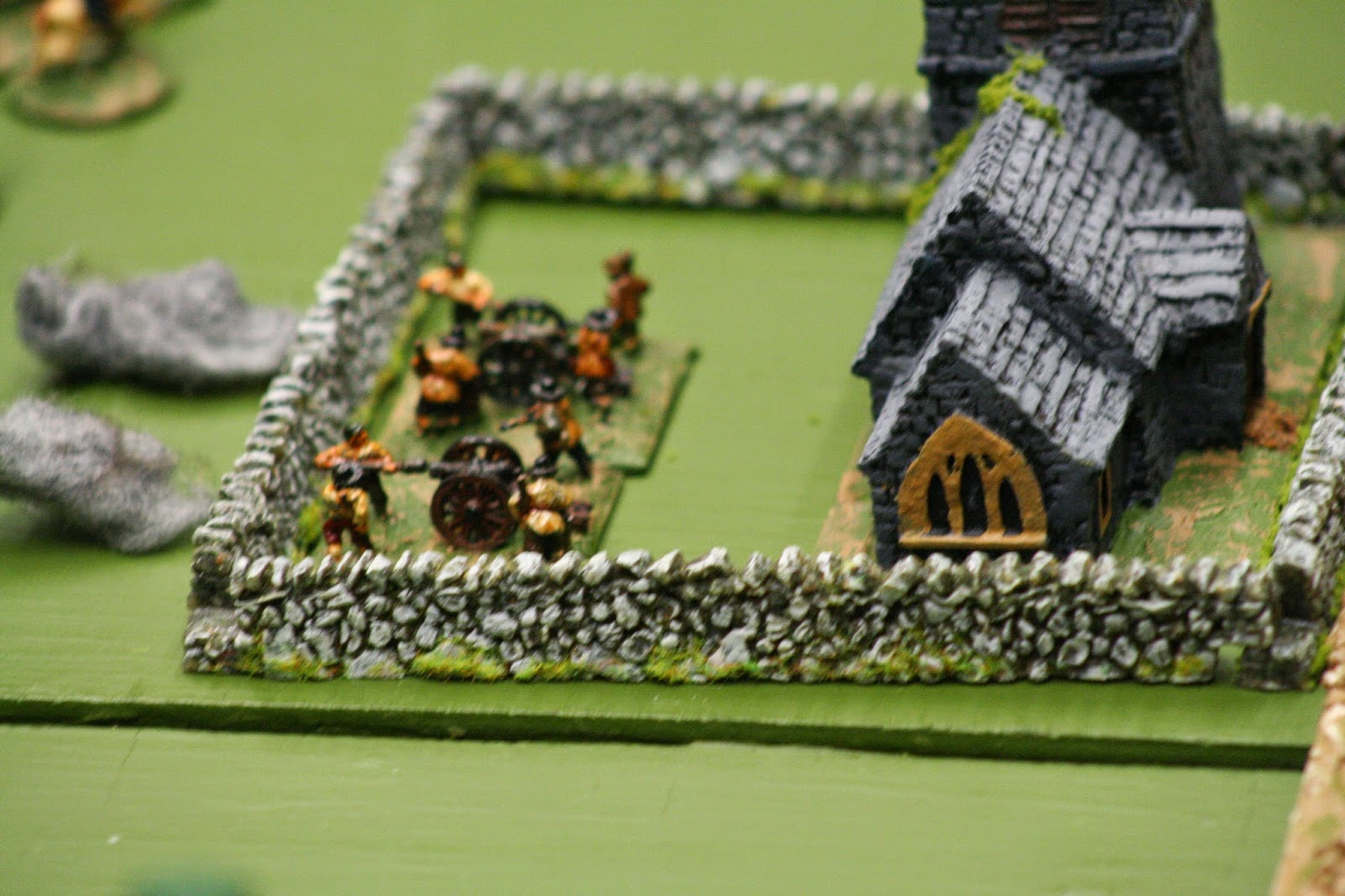 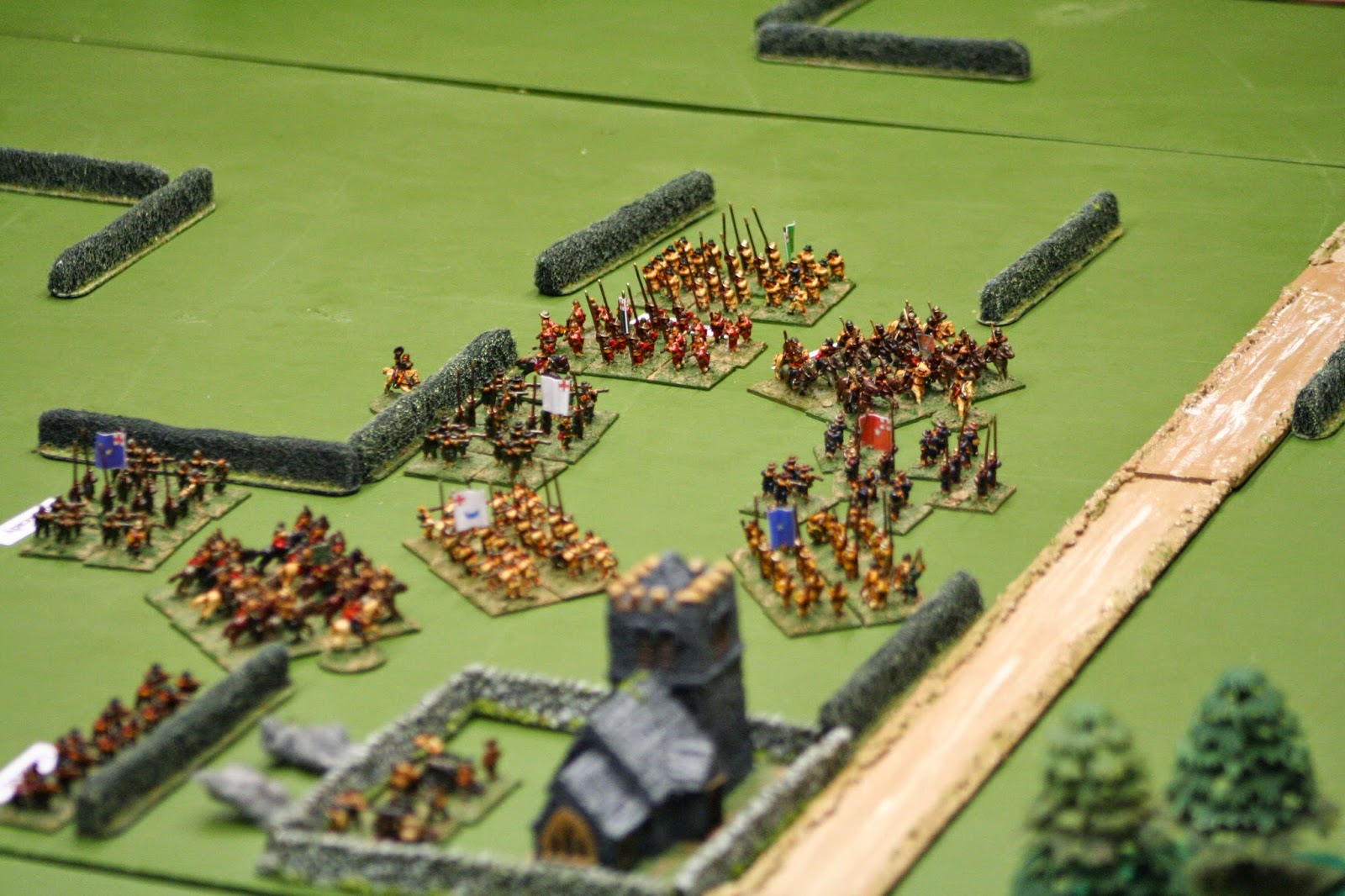 Final attacks were thrown in... 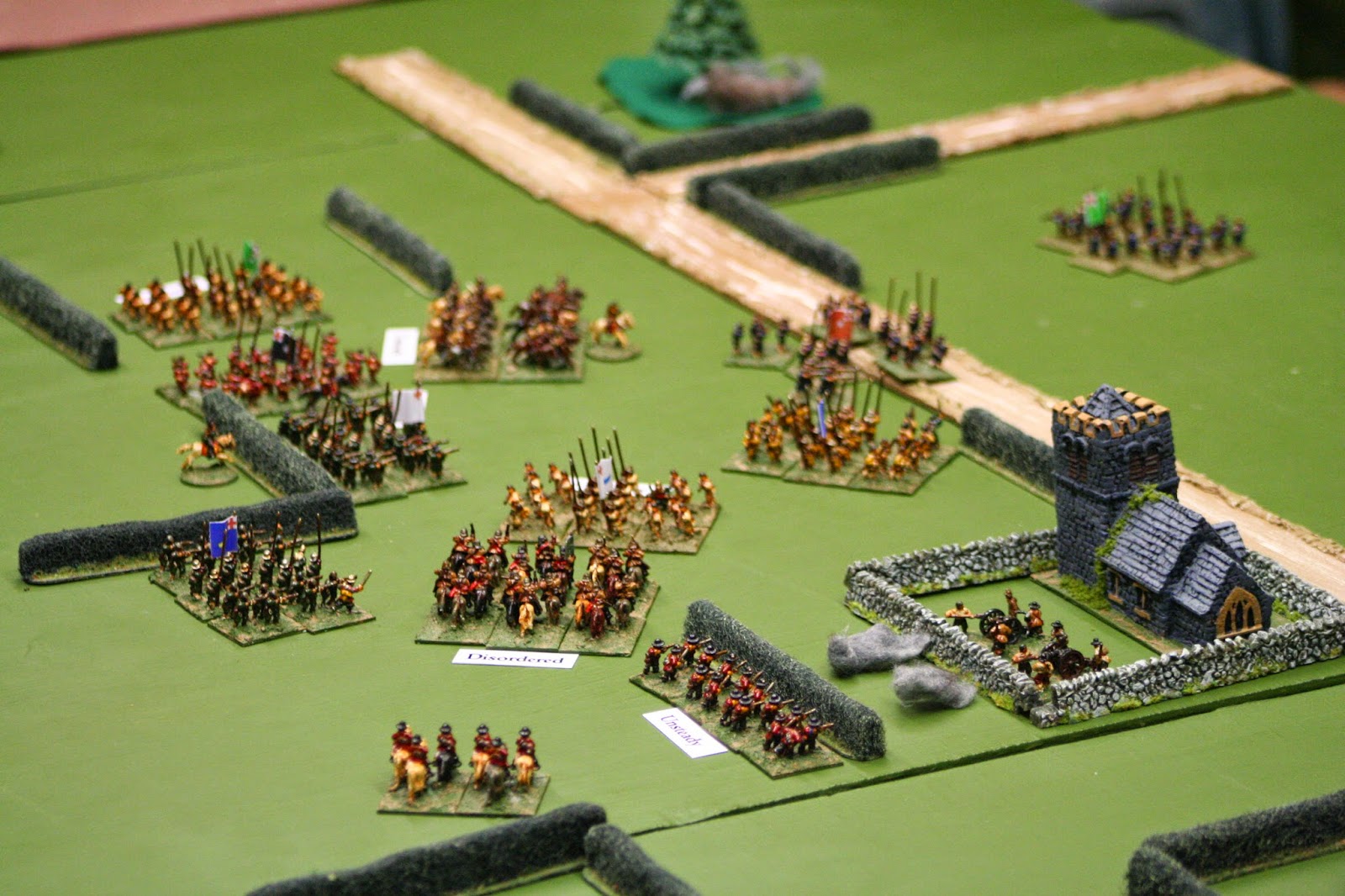 And the Nantwich garrison arrived. By this point the Royalists were pretty much rallying on the church yard, as they did historically, so we called the game as over.

A win to Parliament, as historically. The forces were mostly balanced, but the manoeuvrability of the cavalry proved to be key. This enabled an envelopment whilst the infantry engaged in the centre.

The battle was significant as Fairfax's first big win in the open field, and Byron lost his job to be replaced by Prince Rupert. The aim of preventing more troops joining the King from Ireland was only partially achieved, but some lad called Monk and about 1,000 foot were captured and swapped sides.

A tough, head banging, game for both players. I think the rules held up well, but Phil thinks the d10 and the melee system used in the game gives too extreme results at times. Chris W, in his first game, quite liked them. Any how, decide for yourself. "Victory Without Squares" is available as a down load, top right.

Next week Ceresole with FoG-R.
Posted by Trebian at 16:32