So, my second game of FoG-R featured again some much loved older figures and a date in Italy.

Richard and I faced off with the armies (I had the Spanish, Richard the French) and Chris A & Phil umpired. At this stage of the learning process having two sets of the rules and two people working out what is going on is a definite advantage.

Richard had the advantage of having played FoG (although that carries with it the risk that FoG-R works in different ways at crucial points). I resolved (despite reading the rule book over the last week) to rely on trying to use the troops historically and see what happens. 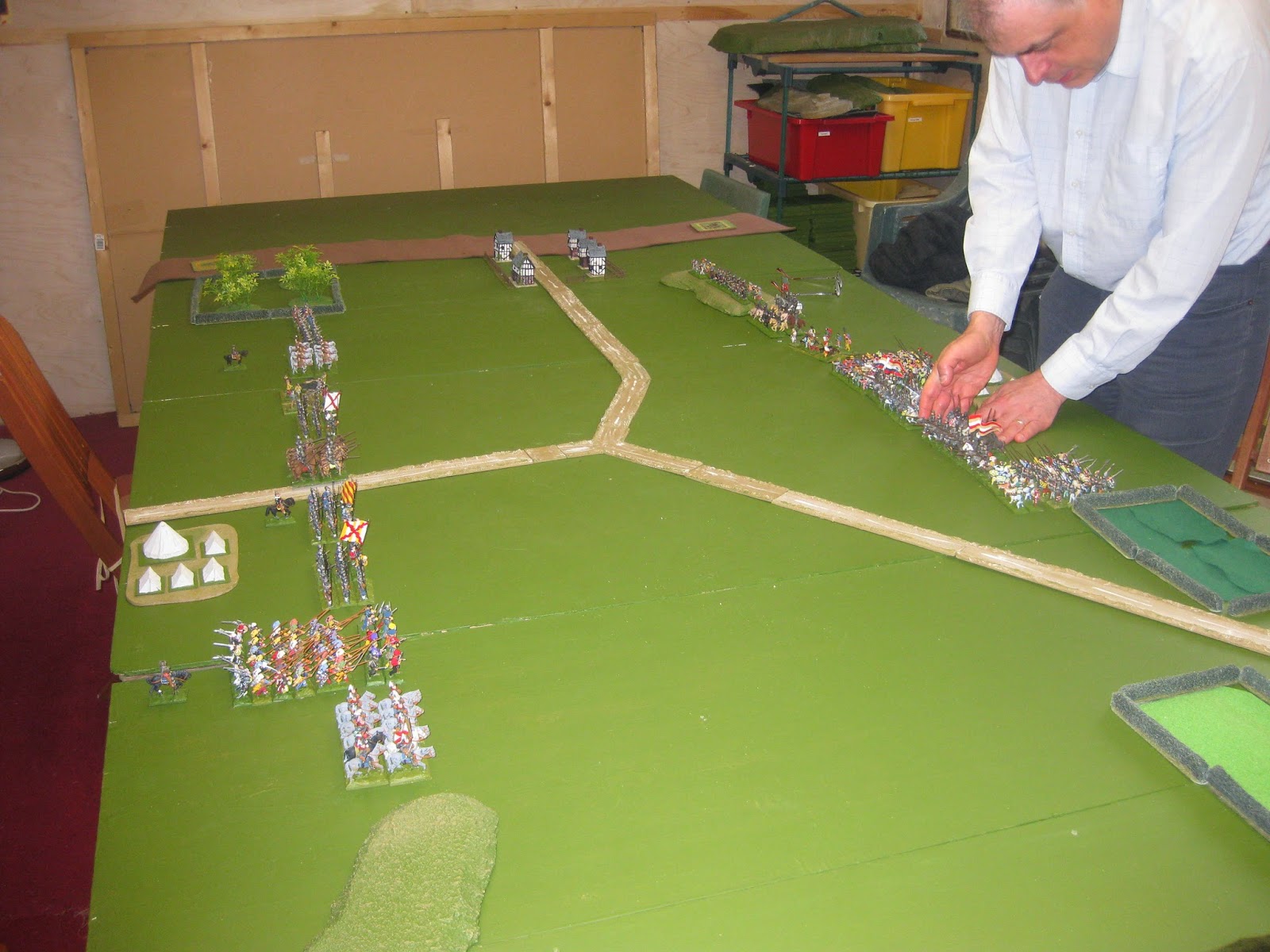 Richard swapped some of his units round. He's not that comfortable with the idea of putting his cavalry in the middle of the table, but the flanks are full of terrain, so that reduced his choices. 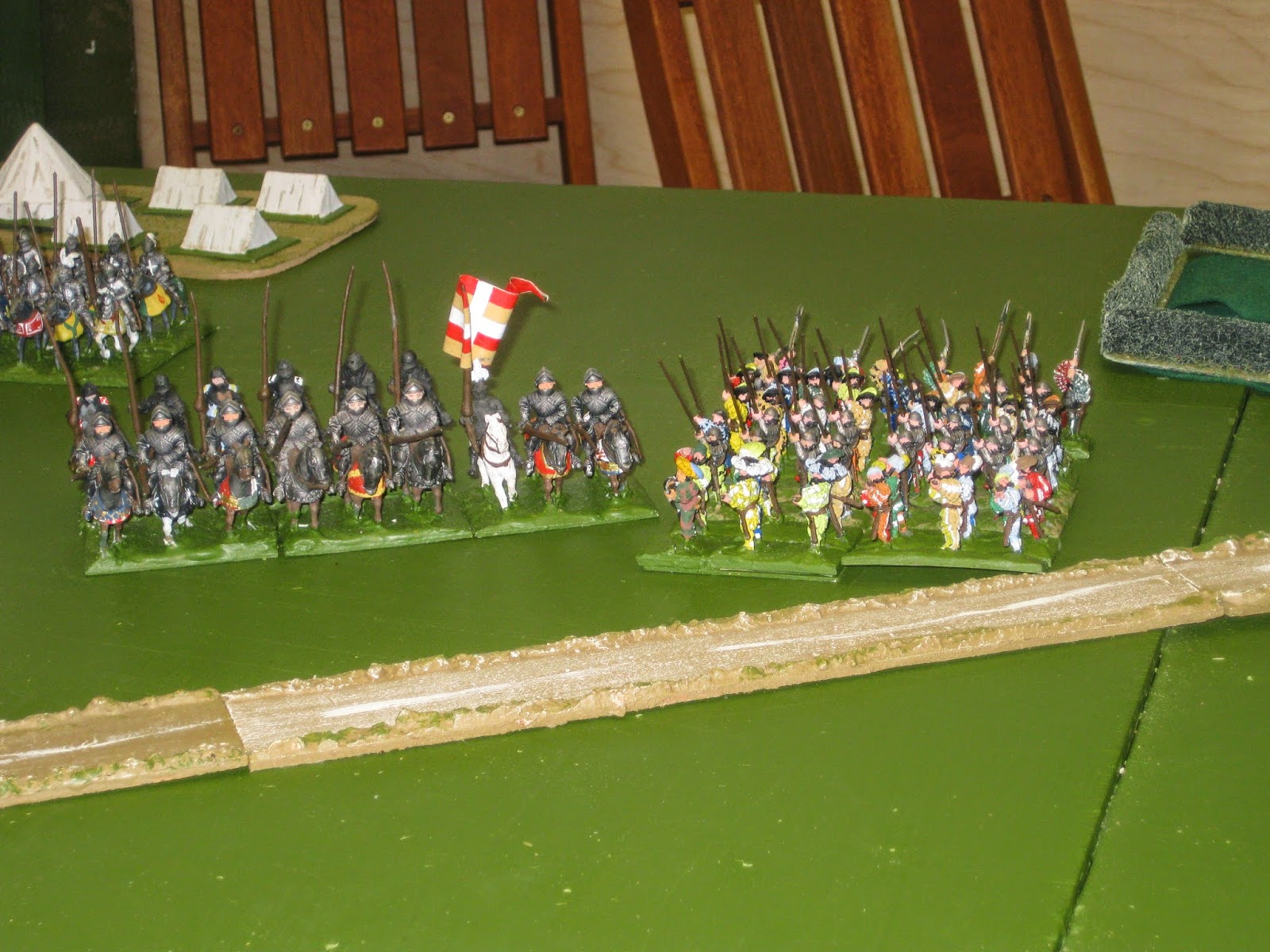 With an army stuffed with Gendarmes, Swiss and Landsknechts he headed off towards me, veering towards my right wing to try and flank me a bit. The French Italian Wars army from the basic rule book has a BIG punch. 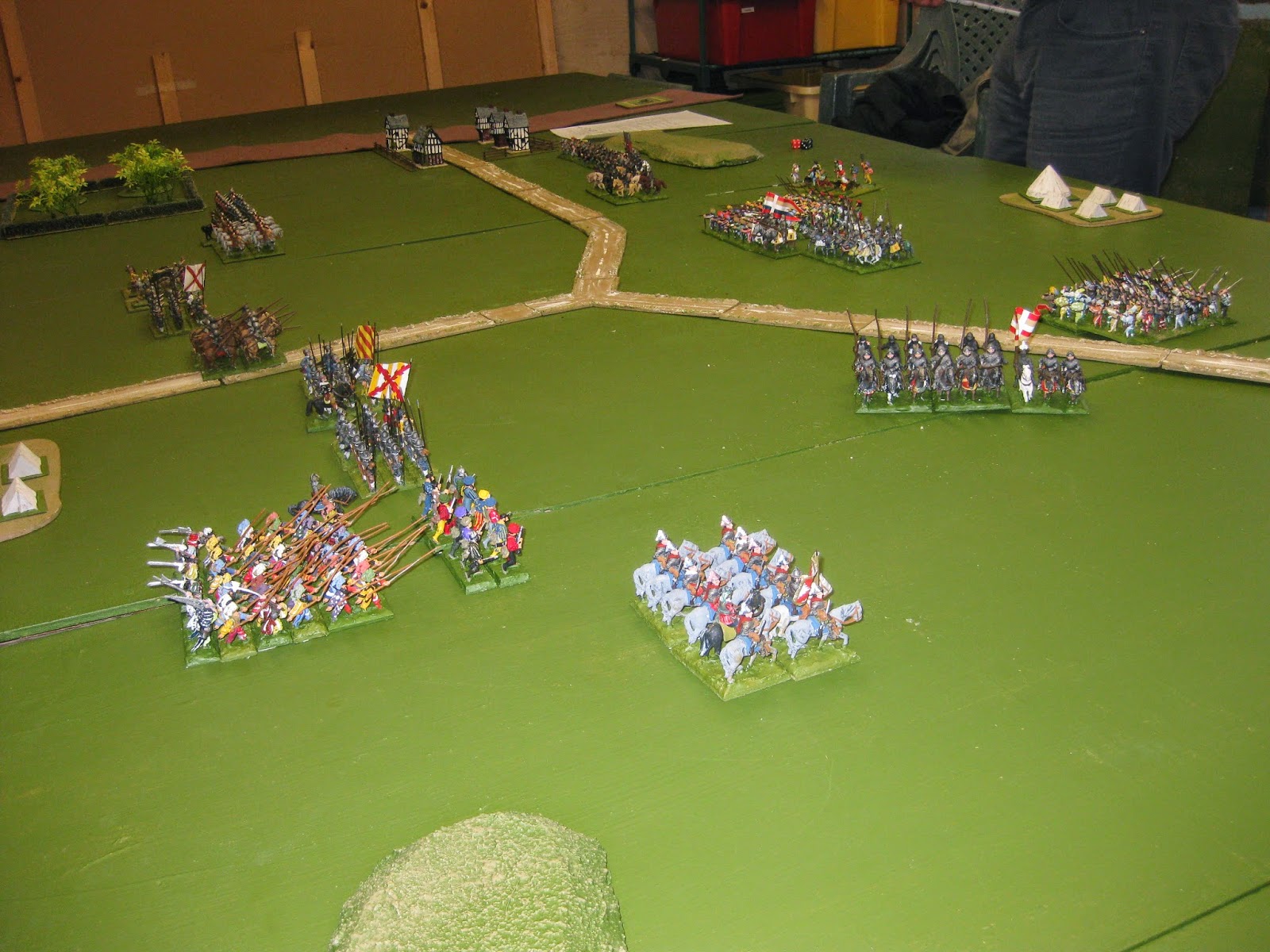 The meant I had to push my mounted arquebusiers out even further to the right. It wasn't an enticing prospect but I reckoned I needed to tempt the Gendarmes into trying to play tag with some lighter horse to keep them occupied. Elsewhere in the middle I'm heavily out-gunned by pikes and Gendarmes. I've got some Landsknechts and some Spanish lancers, but this is the pre-Tercio army with three smallish Colunelas making up the rest of my infantry. With my units of arquebusiers as well what I'm aiming to do is draw his larger units forward and them hit them with two to three of mine. 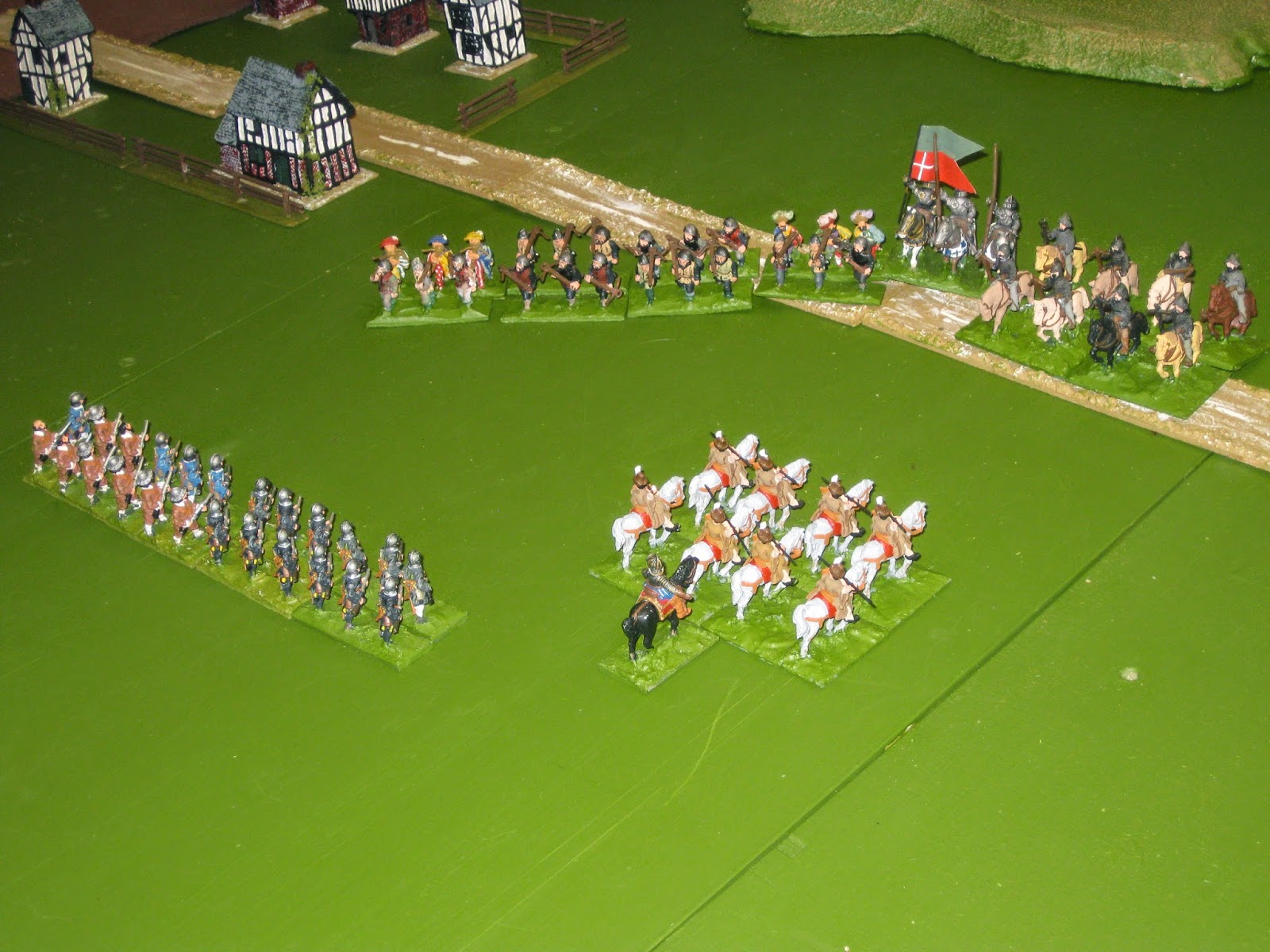 On my left I have some arquebusiers and Genitors (okay, the figures are actually stradiots) trying to hunt down some Aventurier cross bows and argoulets. 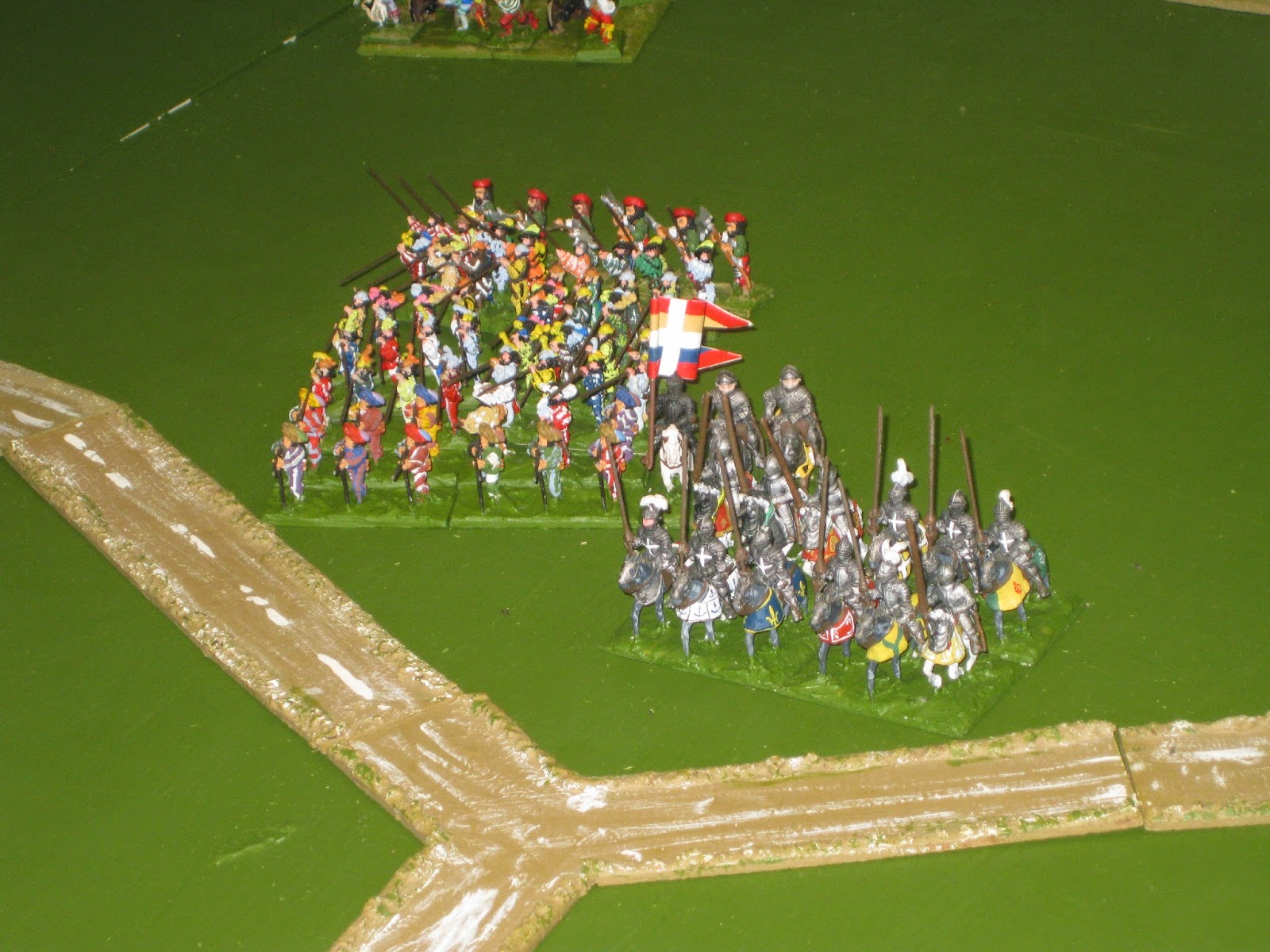 My, those pikes and Gendarmes look scary. 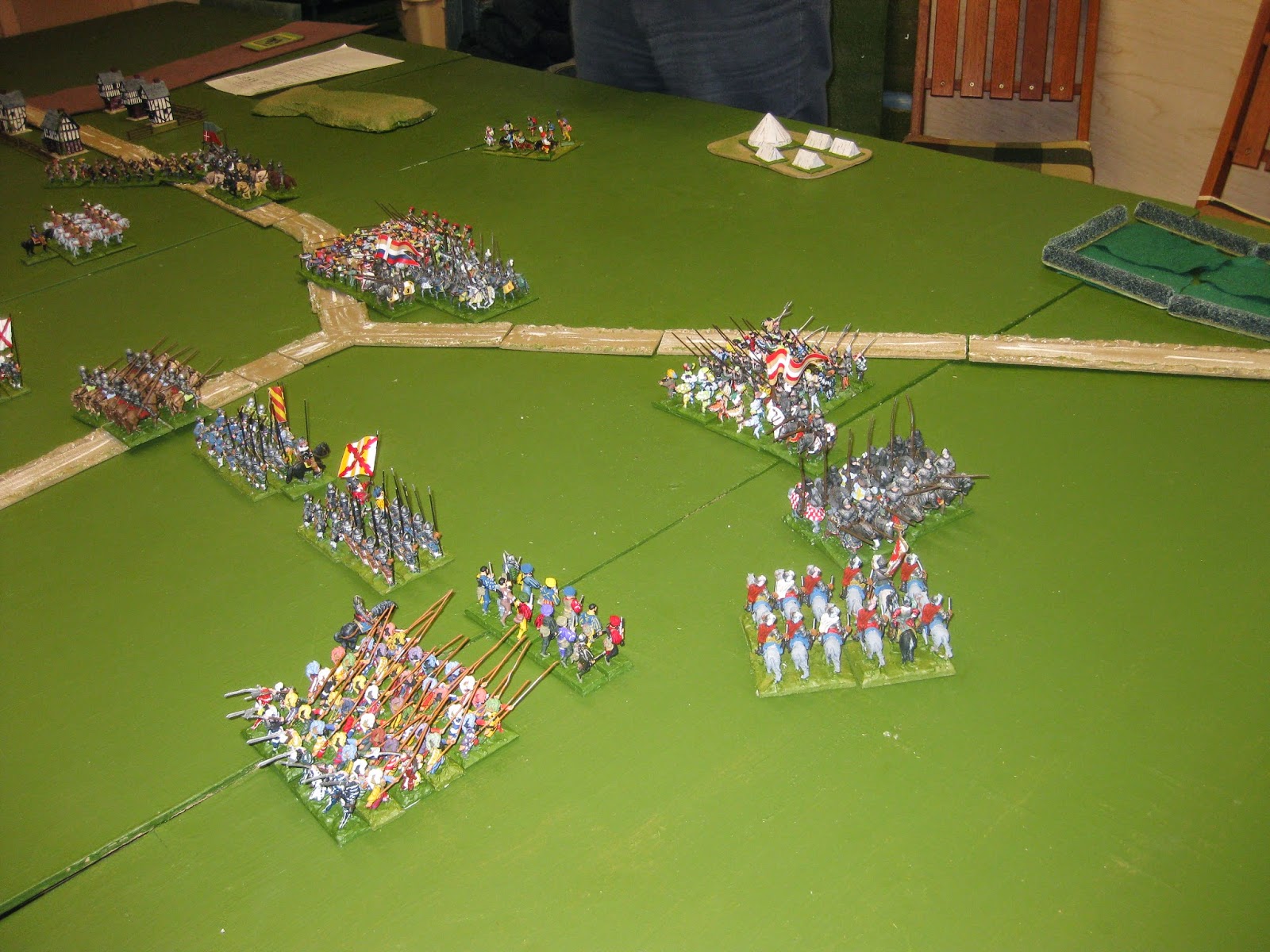 On my right as you can see I'm already pulling the Gendarmes wide to delay their involvement in the battle. I've pushed my centre up, but it'll become more concave later on. 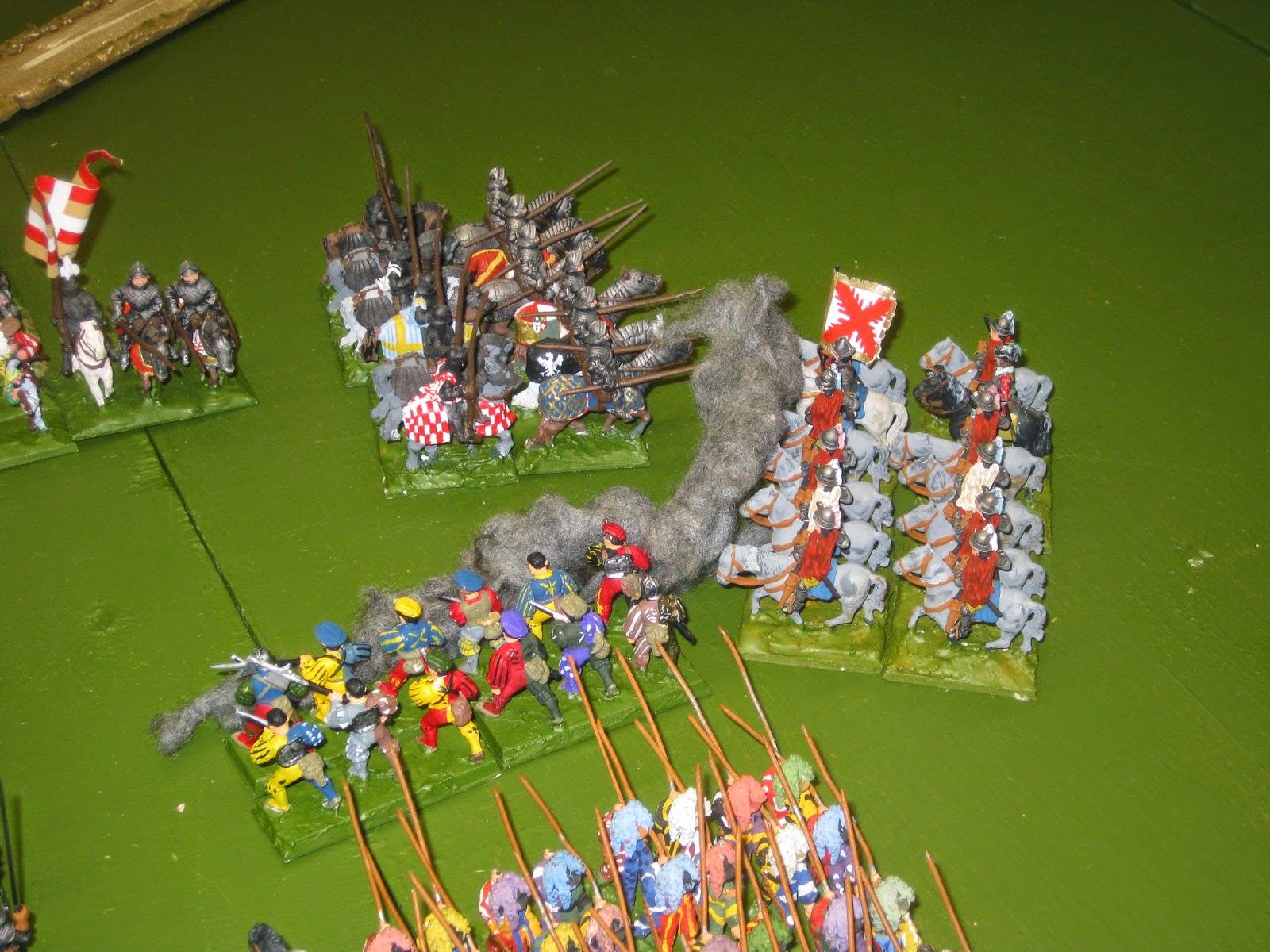 Having got the Gendarmes out on the flank, I'm able to give it a double volley of arquebus fire and disrupt the unit. 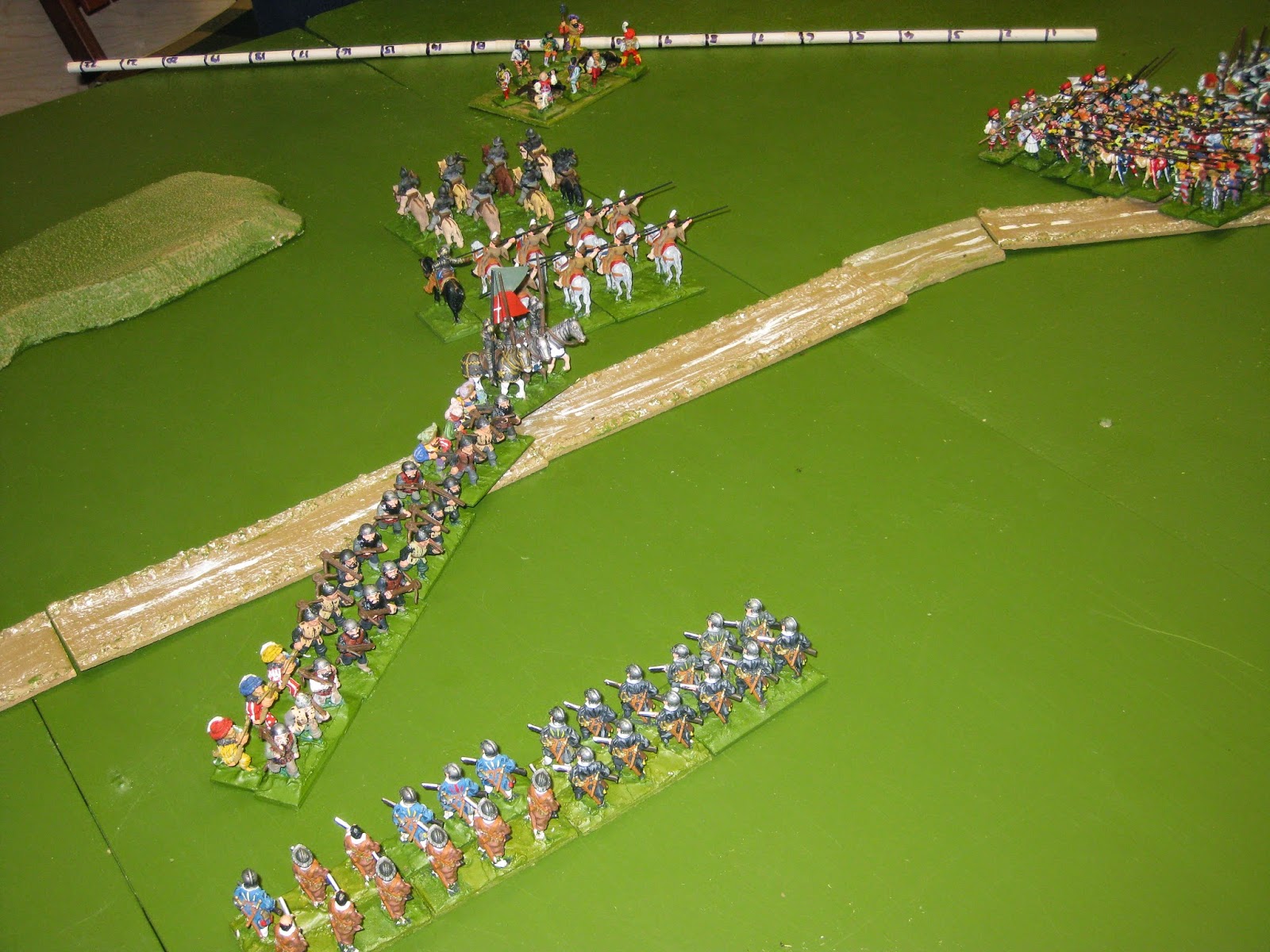 On my left Richard has evaded back away from my Genitors with his Argoulets. This enabled me to fight the battle on this wing on his side of the table. He was forced to support charge me or leave his artillery vulnerable to capture. Meanwhile my arquebusiers were gradually closing the range on the crossbow men. 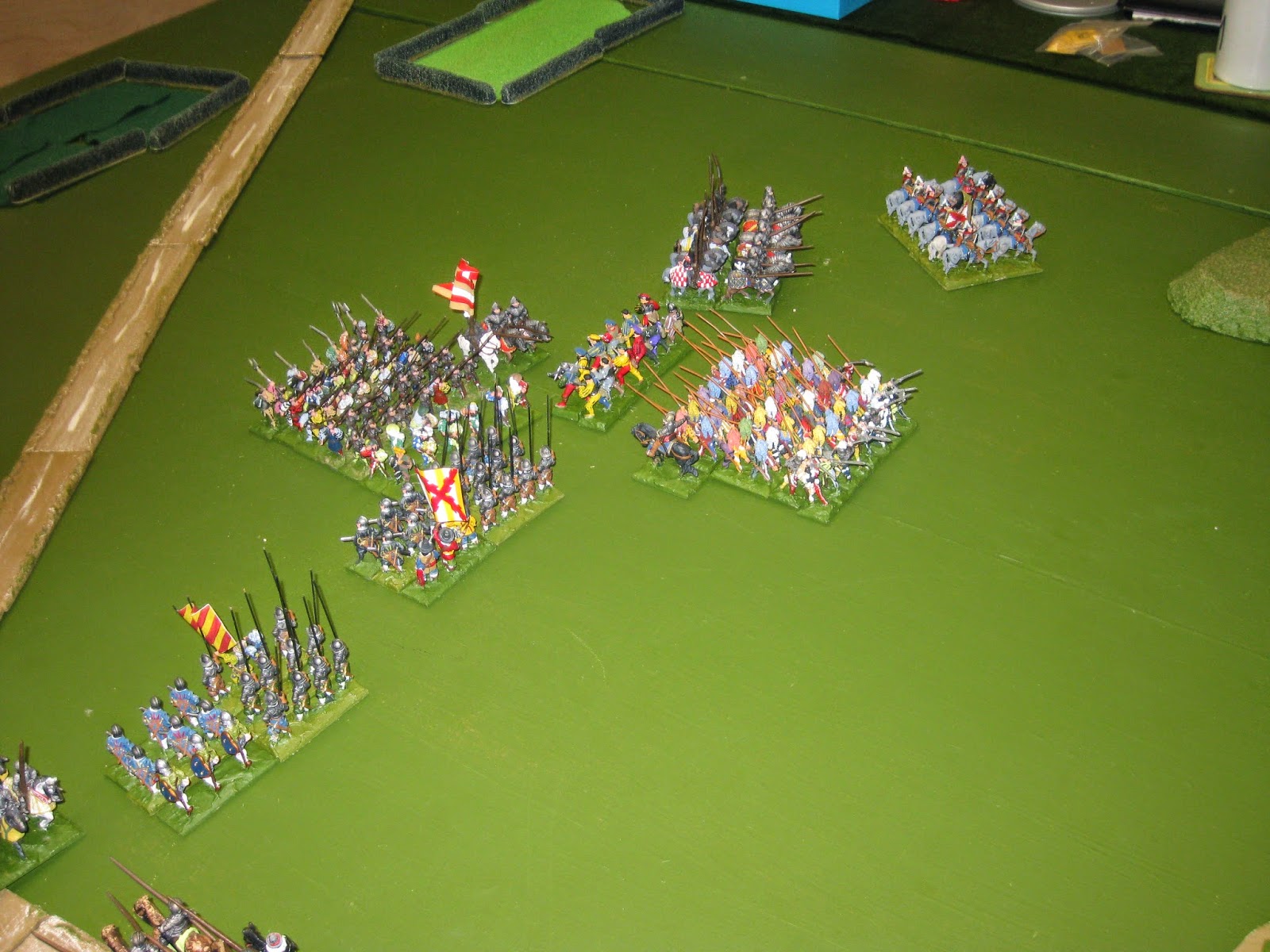 The Gendarmes are finally forced to declare a charge on my mounted arquebusiers, who skip out of their way. However, I've made a mistake and the Swiss catch my Spanish foot. These should be looking to attack the flank whilst my Landsknechts hold them to the front. Whoops. Forgot determined foot are FAST. 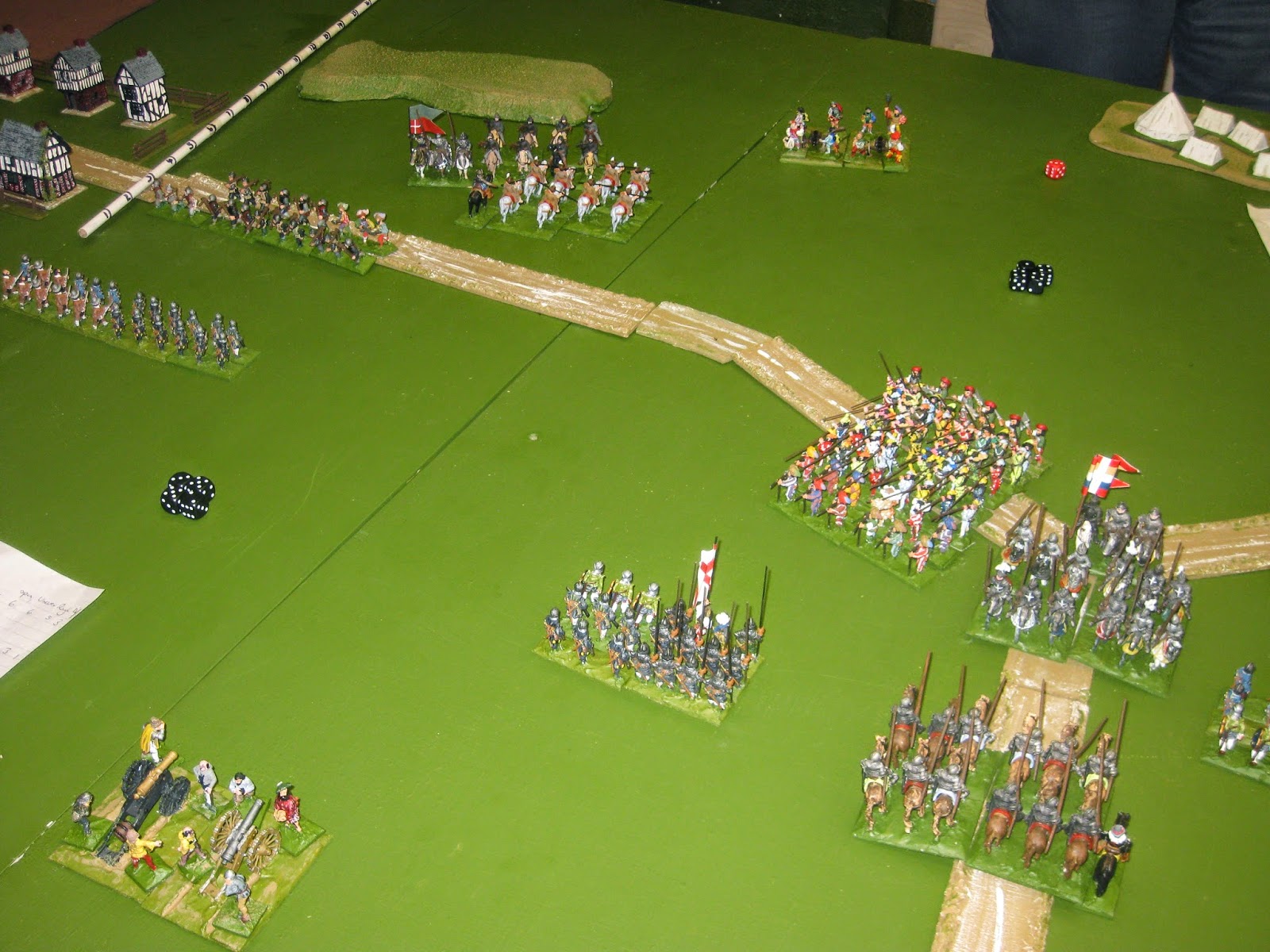 In the centre it's going better. The French Gendarmes are heading towards my slightly lighter horse, with one flank covered by Landsknechts. The other flank is open to one of my Spanish foot units, who are wheeling to hit them in the flank when the opportunity arises. 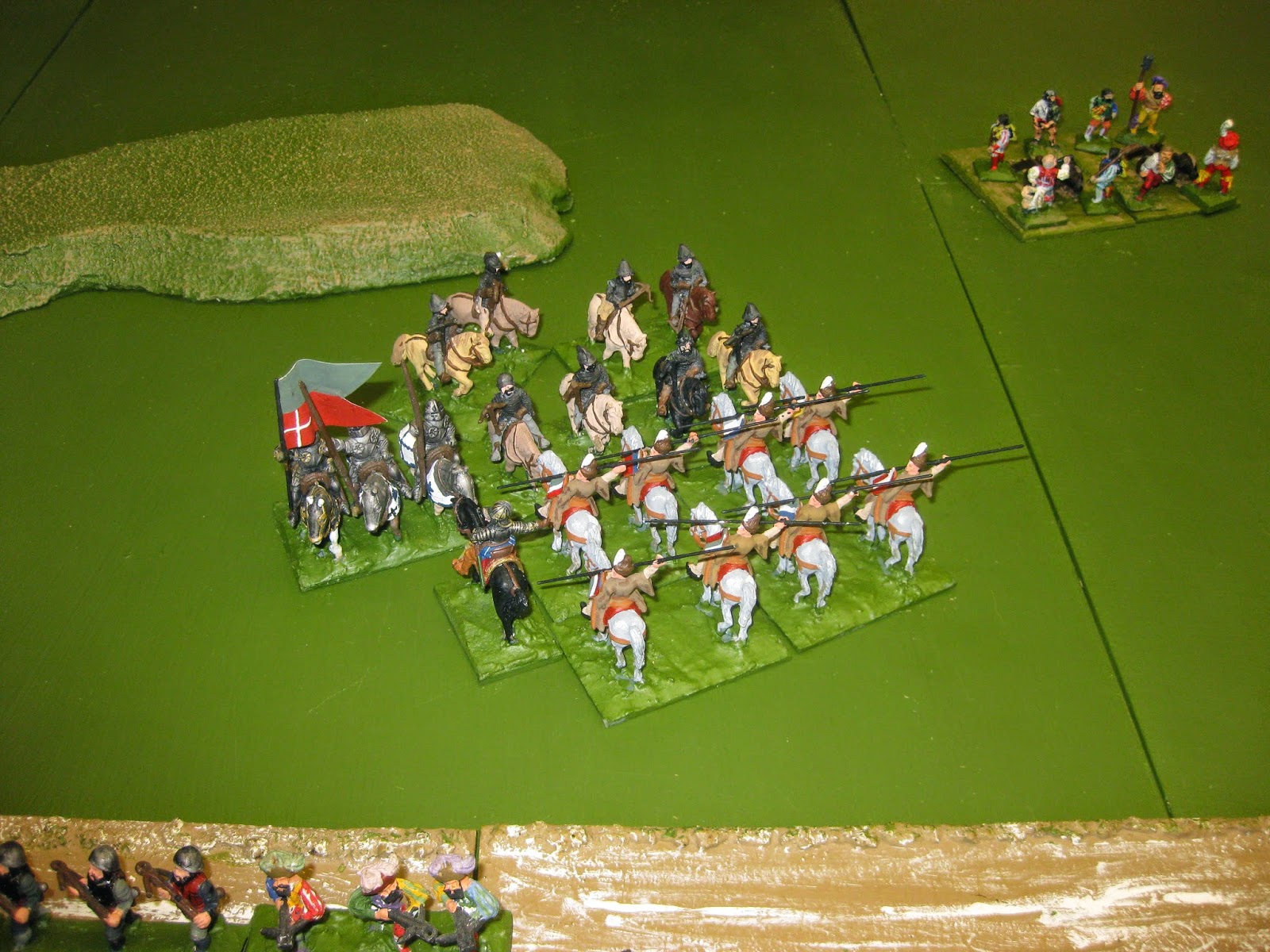 This is the high watermark for my light cavalry on the left. I've disrupted the argoulets, and things are looking good. If I can break them it opens up the artillery to capture. 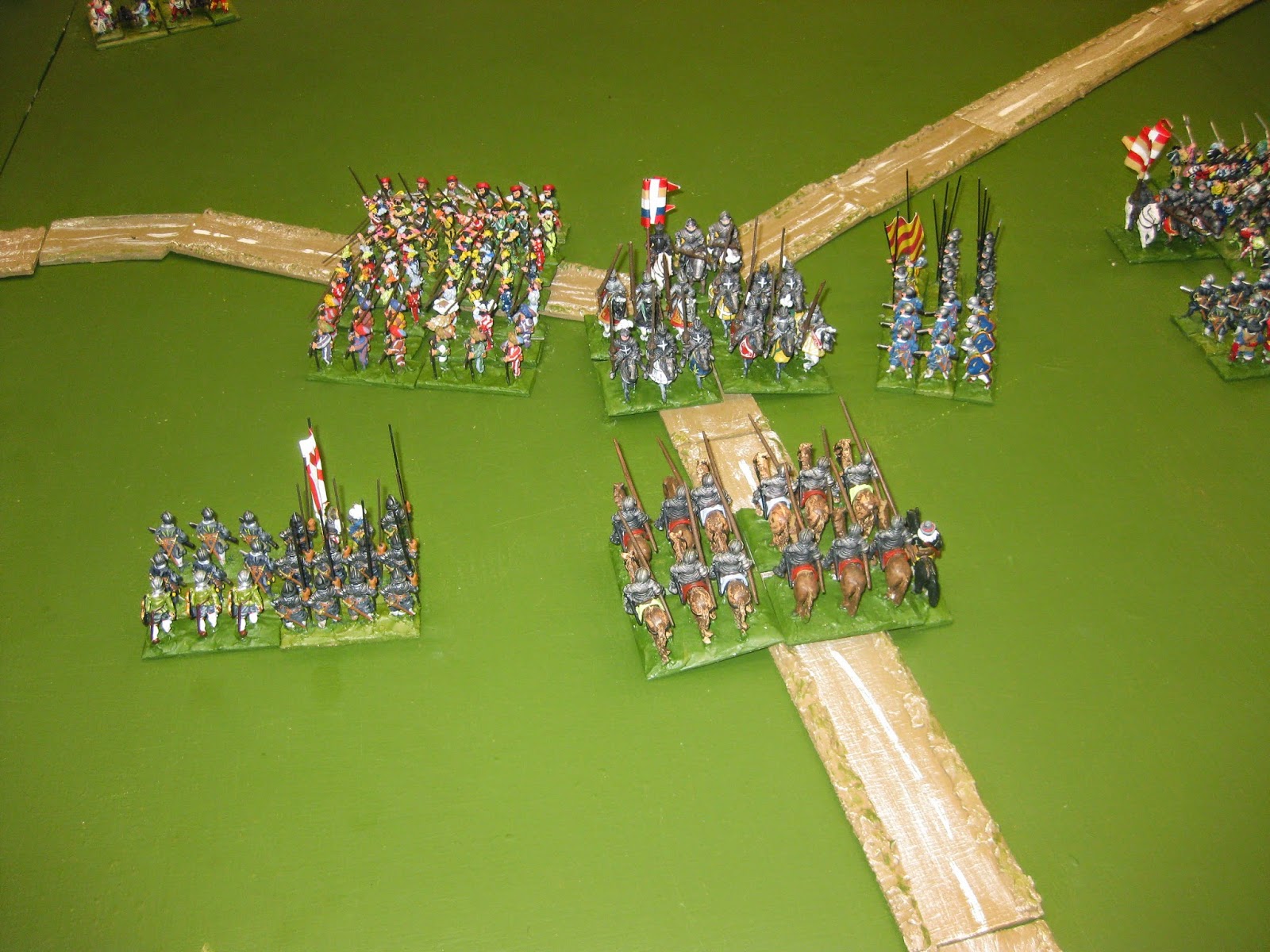 Yes, the French Gendarmes are right where I want them. A volley of arquebus fire, then I'm charging home. 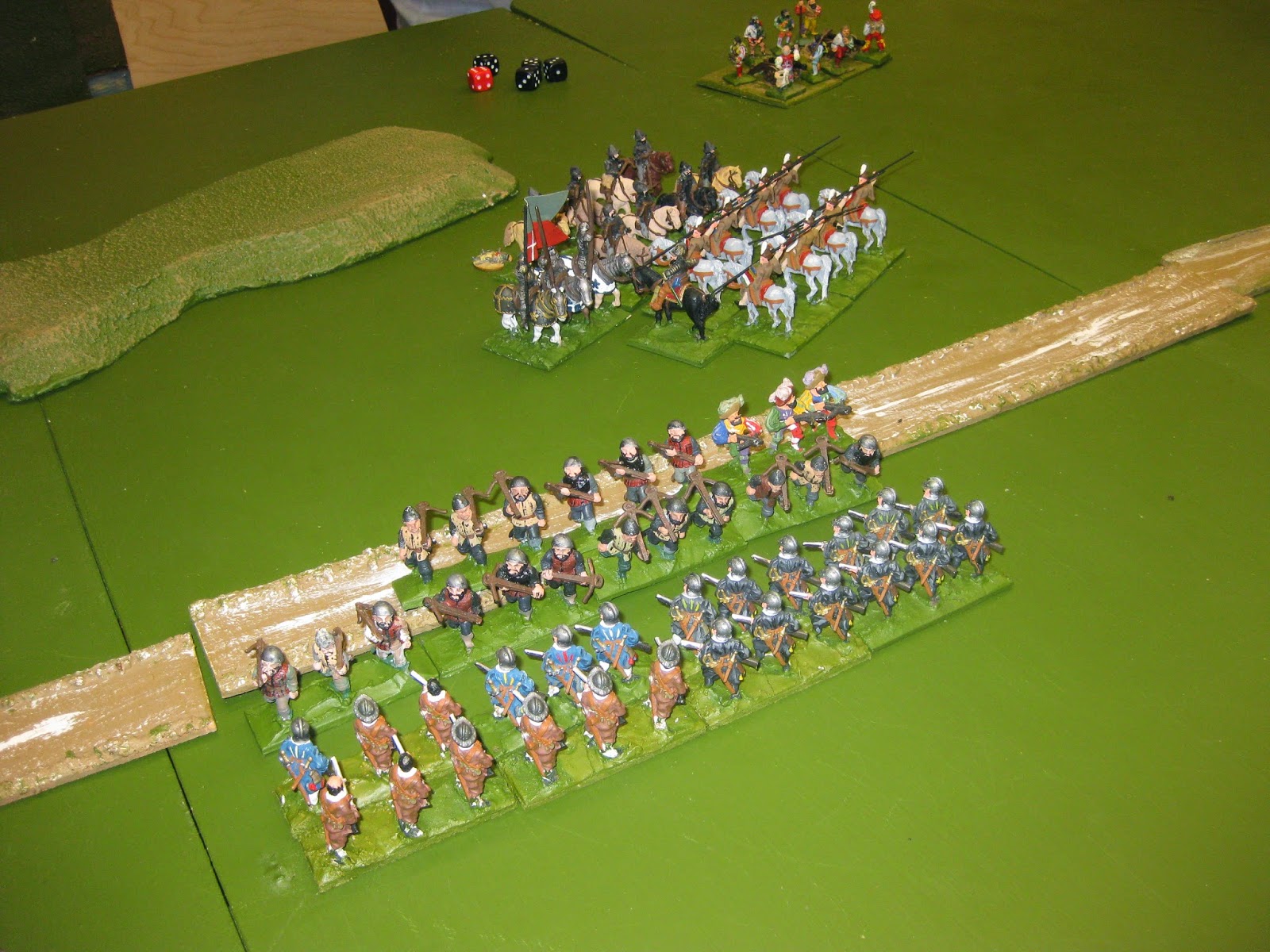 The cross bow men are starting to take casualties as well out on the left. 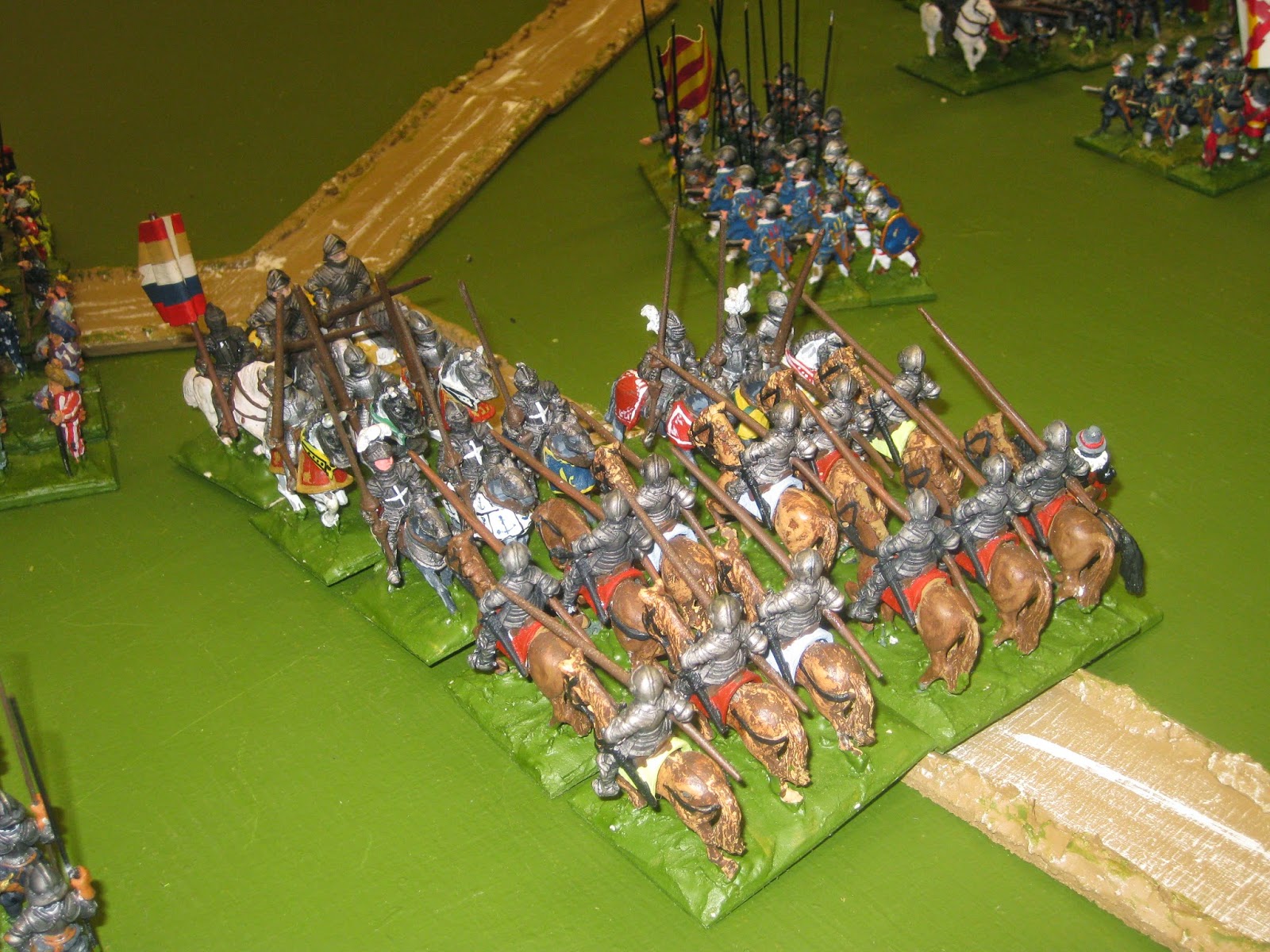 So, with one base of French Gendarmes shot away, in we go. Looking good indeed. 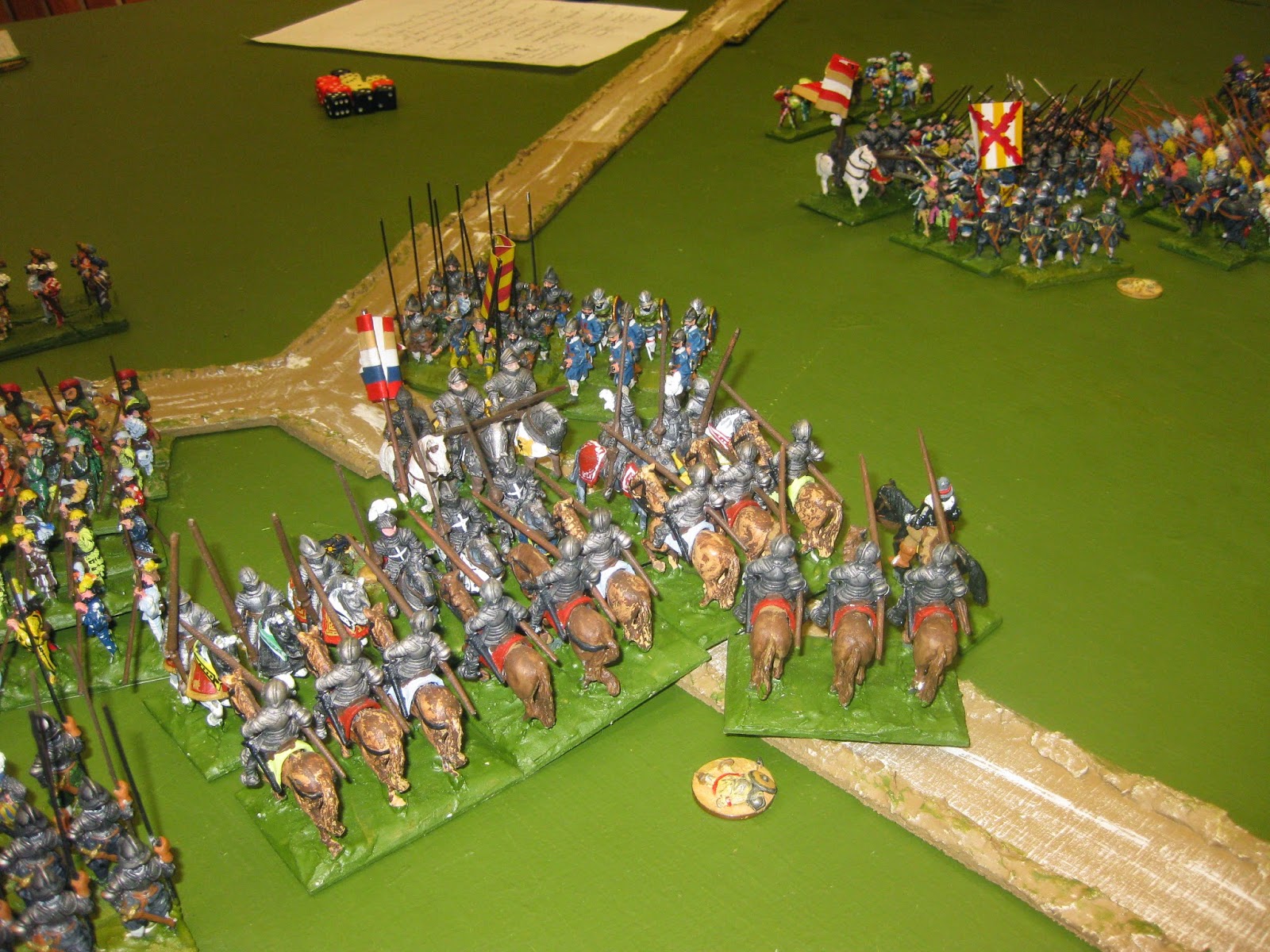 Okay, so I fail a cohesion test and end up a bit disrupted, but I've got him in the vice now. Honest. 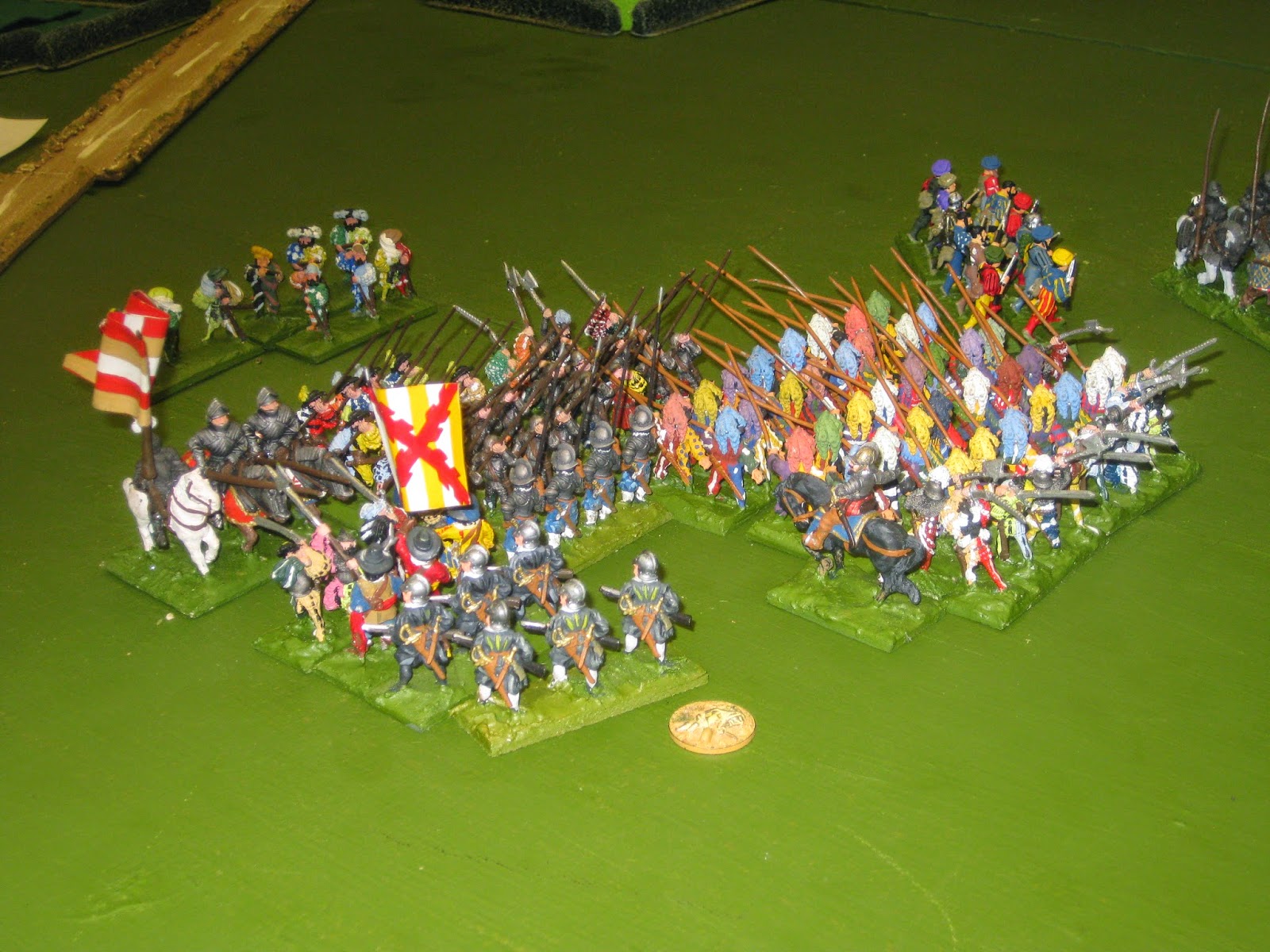 As I said, a mistake. My Colunela on the right is being ground away, and my landsknecht are failing to hit anything. Oh dear. 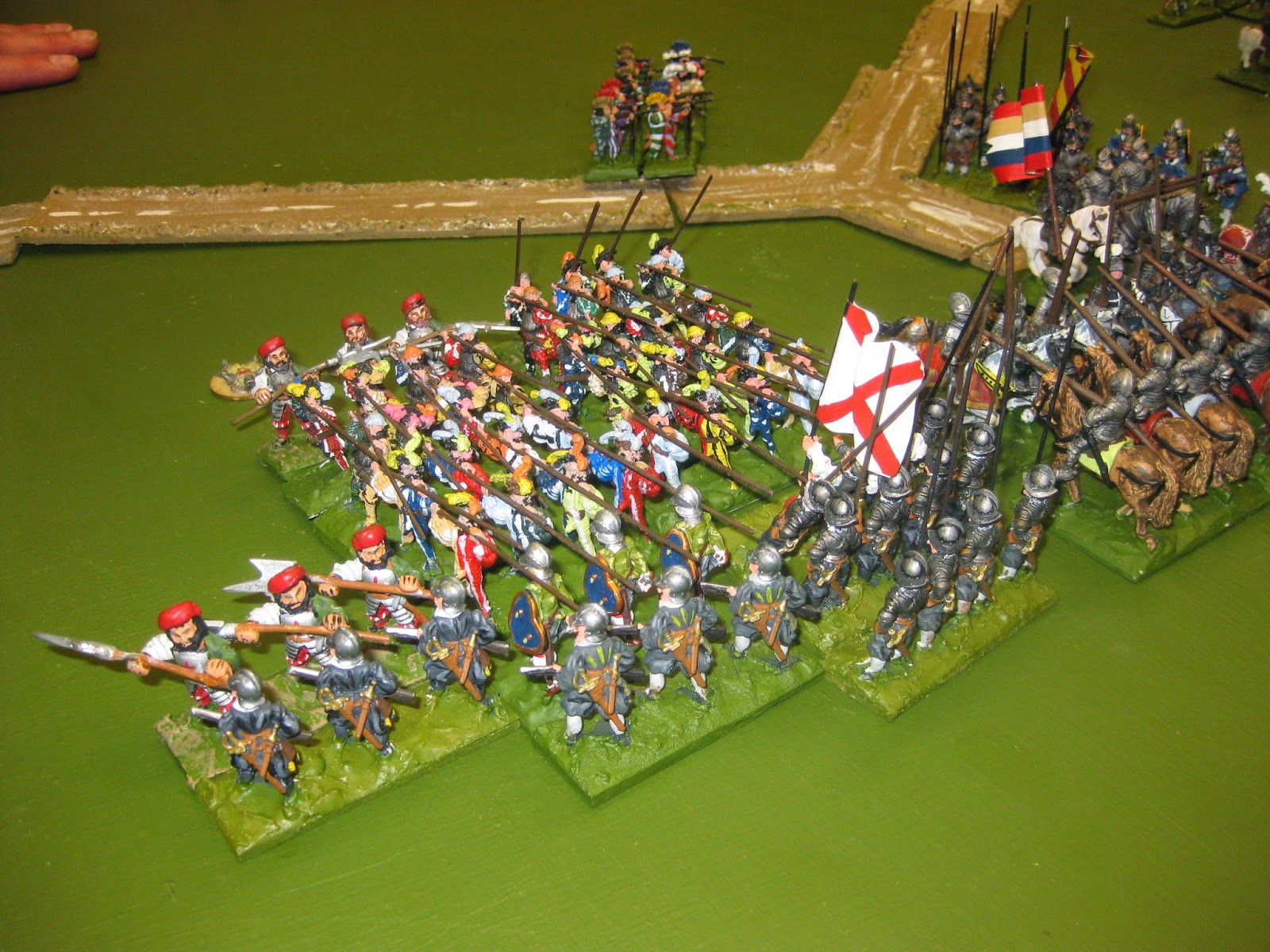 I'm forced to tackle the French landsknecht pike block in the middle head on with a Colunela of Spaniards, to keep them off my cavalry who are beating the Gendarmes. My hope is they can hold for a couple of moves until I can win the central melee and turn my spare units onto his flank. Not that Keils have flanks. Either that or die quickly so I can hit him with my artillery. 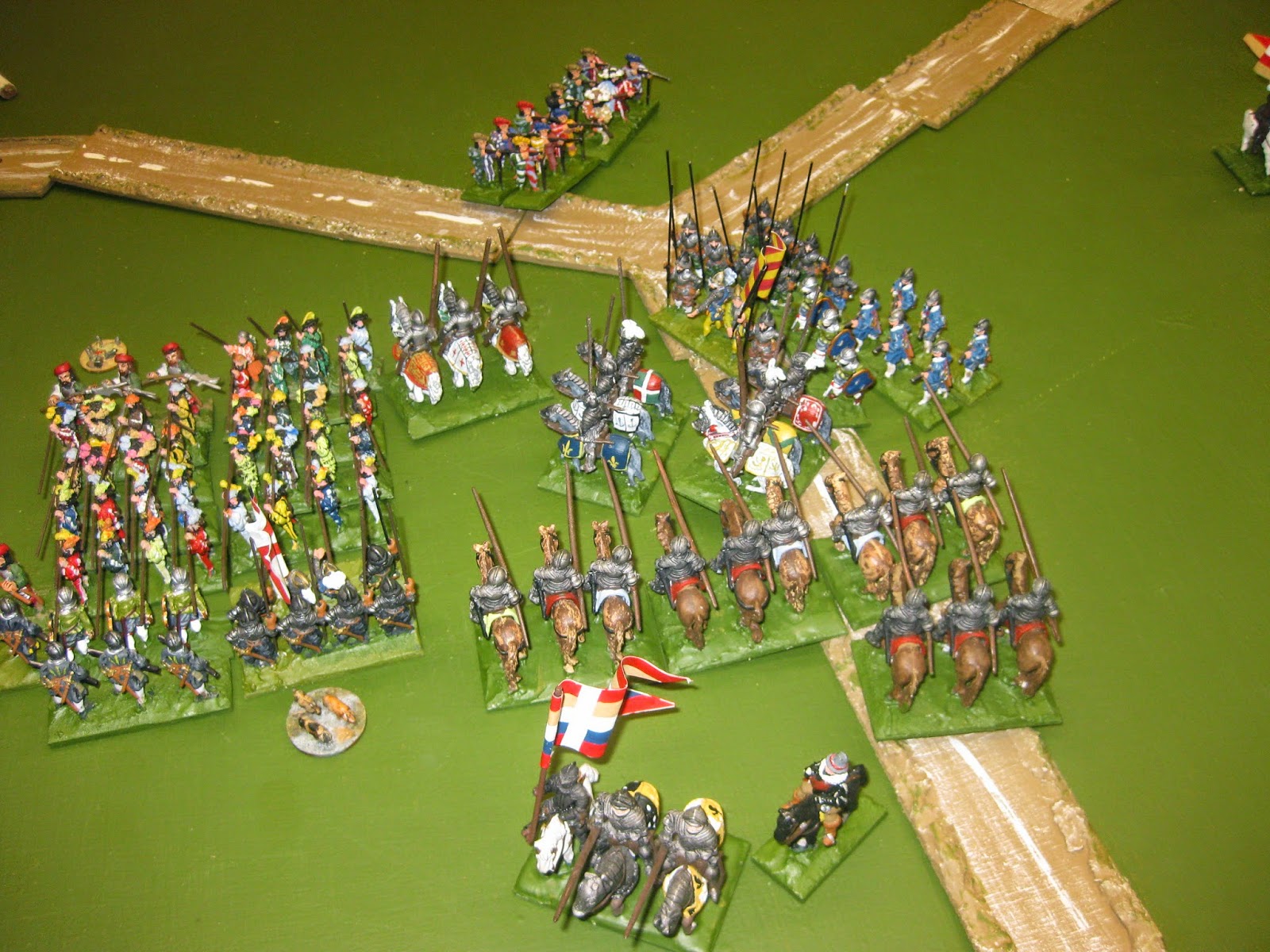 Then the Gendarmes collapse and with no rout path are slaughtered. Francis I is captured, and everything in the garden is suddenly rosy. 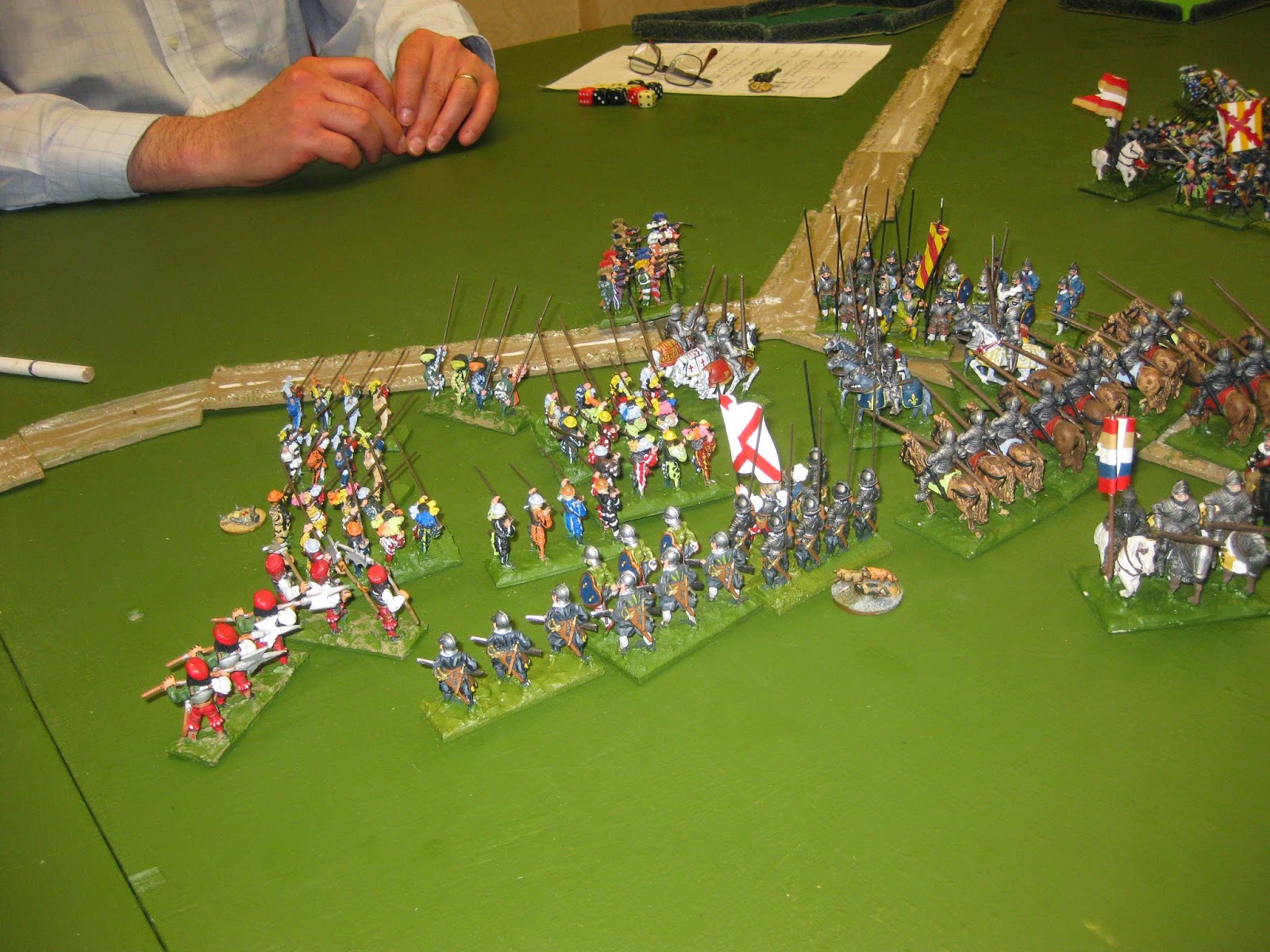 Then the landsknecht next to the Gendarmes fail the "friends routing" test, and break. Oh yes indeedy, it is going well. 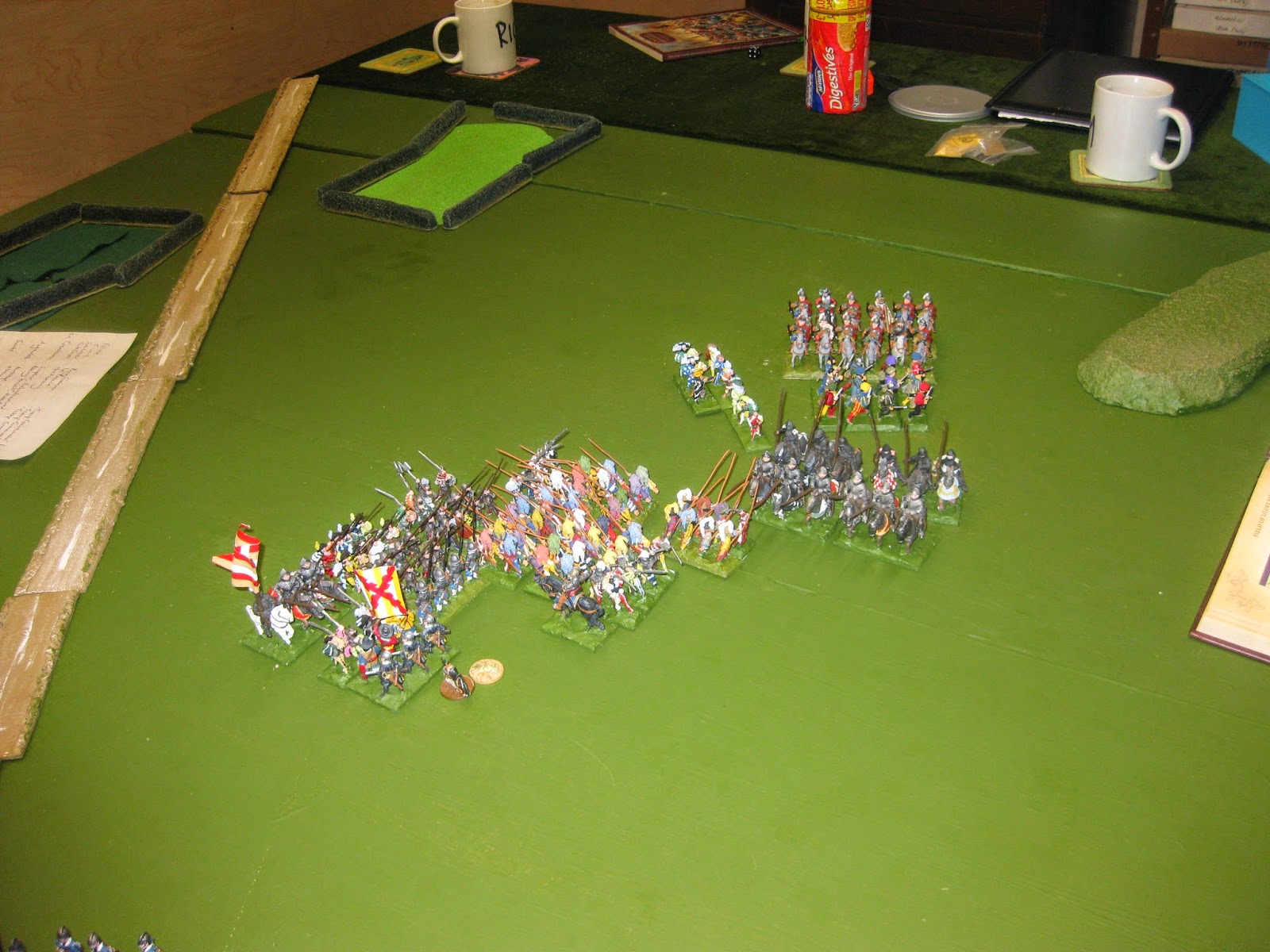 Richard endeavours to pull it out of the fire by throwing his other unit of Gendarmes into my landsknechts on the right. The Spanish foot is badly weakened and fragmented. 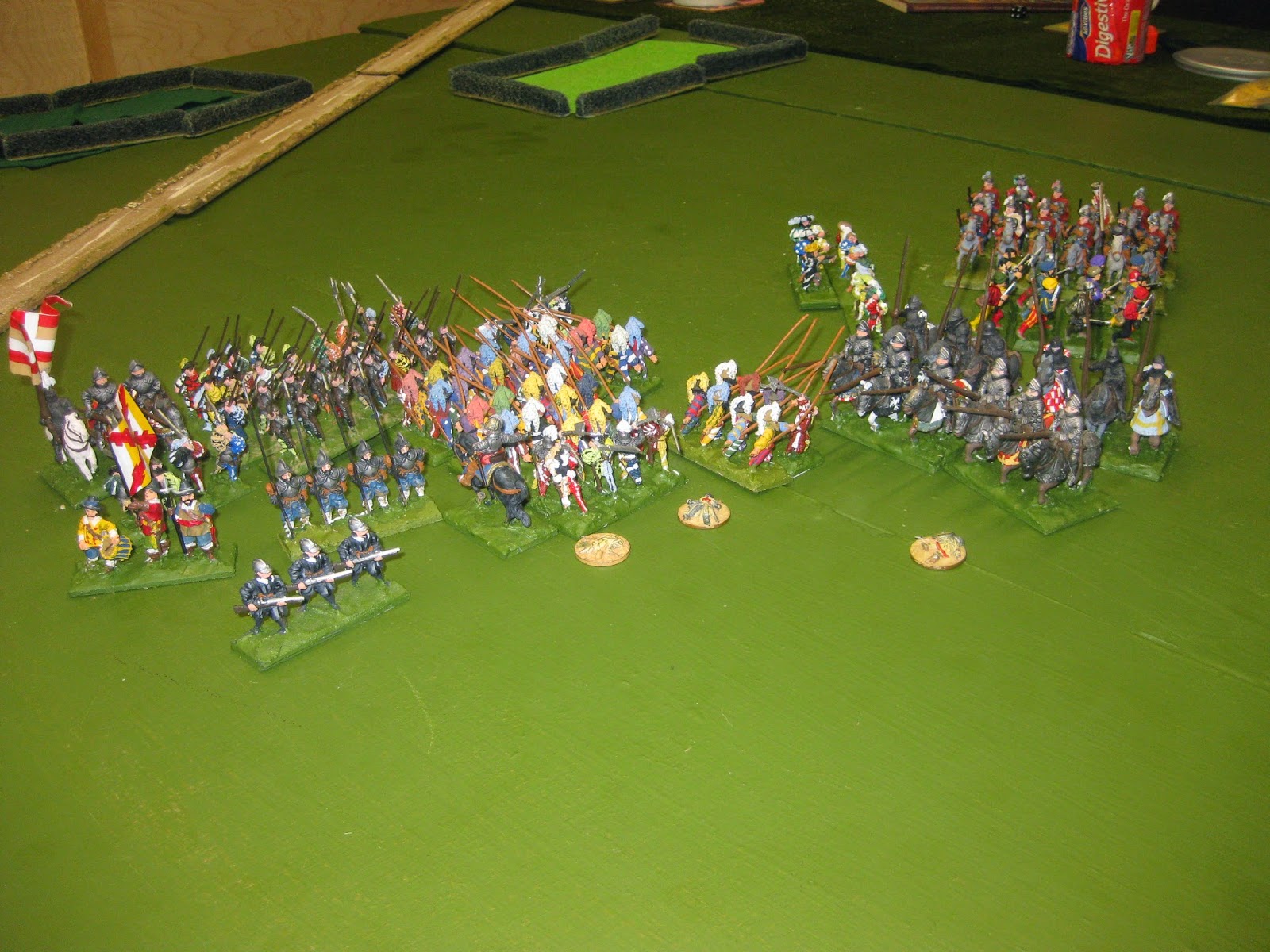 Sure enough they break. We have to end the game there for lack of time. We've been playing about 3 1/2 hours, and we're still a bit slow. Richard's convinced he's lost, I'm a bit more sure it's in the balance with me having a slight advantage.

Another enjoyable evening. Good to get the old toys out once more. My landsknechts & Swiss, all bought at giveaway, clearance, prices once more proving what a sound investment they were over 30 years ago.

Still learning FoG-R. We had to stop to look a few things up. As Phil observed, most people pick an army and learn the rules applicable to that. I'm a bit off that yet.

What did surprise me is that luck can play an enormous part in the game. The dice can stand what look like obvious outcomes completely on their head. I've no doubt a good player will win out most times, but the sheer scale of what outrageous fortune could fall surprised me.

Chris & Phil brought along some army books for me to look at. Chris had the "Wars of Religion" one, which is the main reason I didn't buy FoG-R when it first came out. I sort of expected it to have the armies for the French Wars of Religion in it. It doesn't.

Those armies, of course, are in "Teach & Treachability" or whatever it is called. I have that to look through now to see what else I can make out of my figure boxes.

My, my, those English Elizabeth foot regiments are BIG.