And here's the result of the last Spain v France match. Both sides playing away from home, as usual, but both also employing some ringers. The orbats were in an earlier post: Ceresole Orbat. If you are trying to follow the game both the army lists give the units in order from nearest the camera at the top of each list.

Phil played the French, a shoe-in for the dashing 24 year old Francis, Count of Enghein, whilst Richard played the older and more wily Del Vasto. I over saw the game (bit too strong to say I umpired it as I'm still a bit hazy on FoG-R) and intervened with some one off rules when needed. 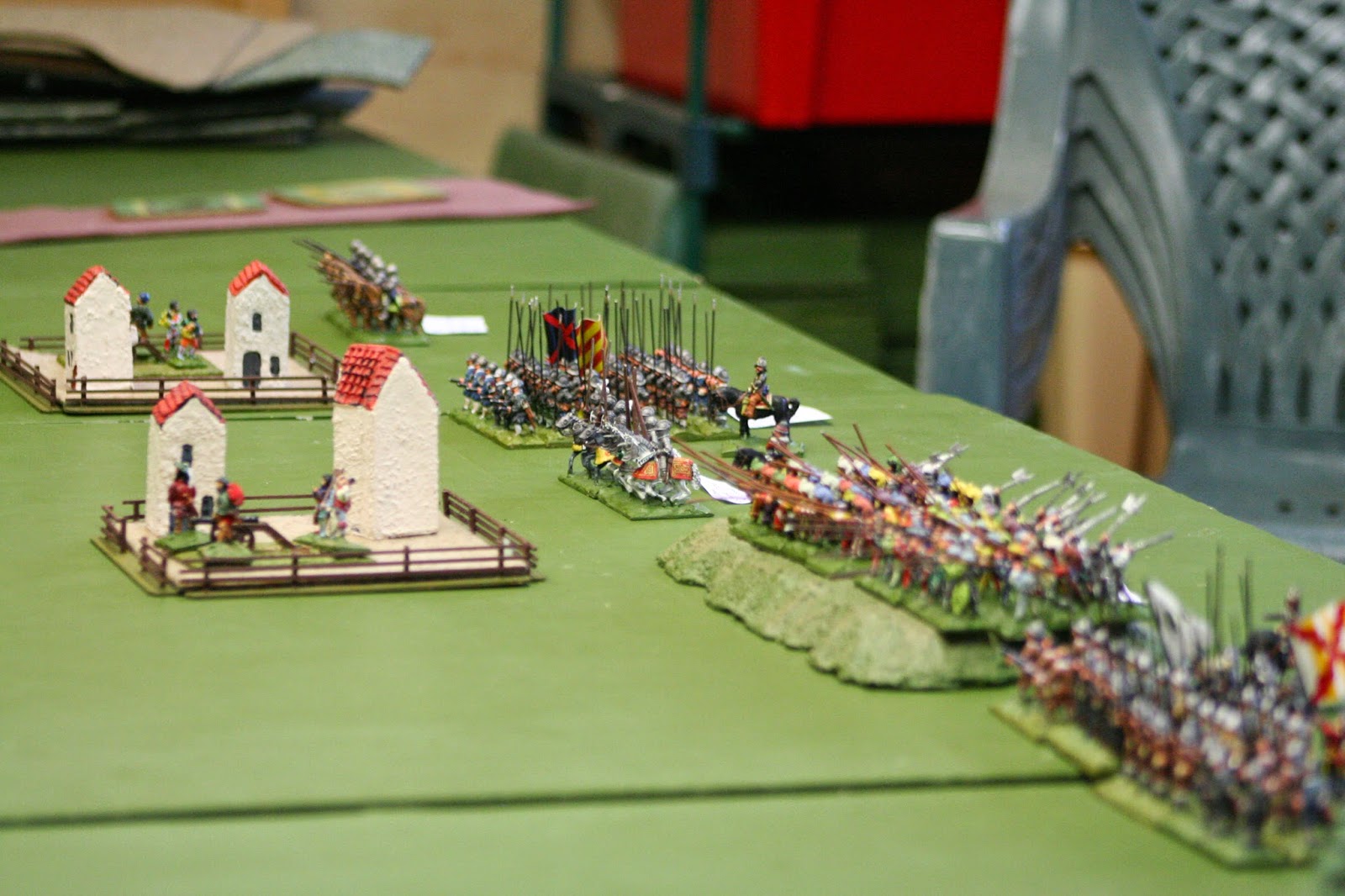 Most of the Imperialist army, in readiness for the battle. The buildings are two farms, much fought over in the initial skirmishing, but as far as I can tell utterly irrelevant otherwise. I added them mainly to break up the monotony of the green table. Their exact location is far from clear anyway. 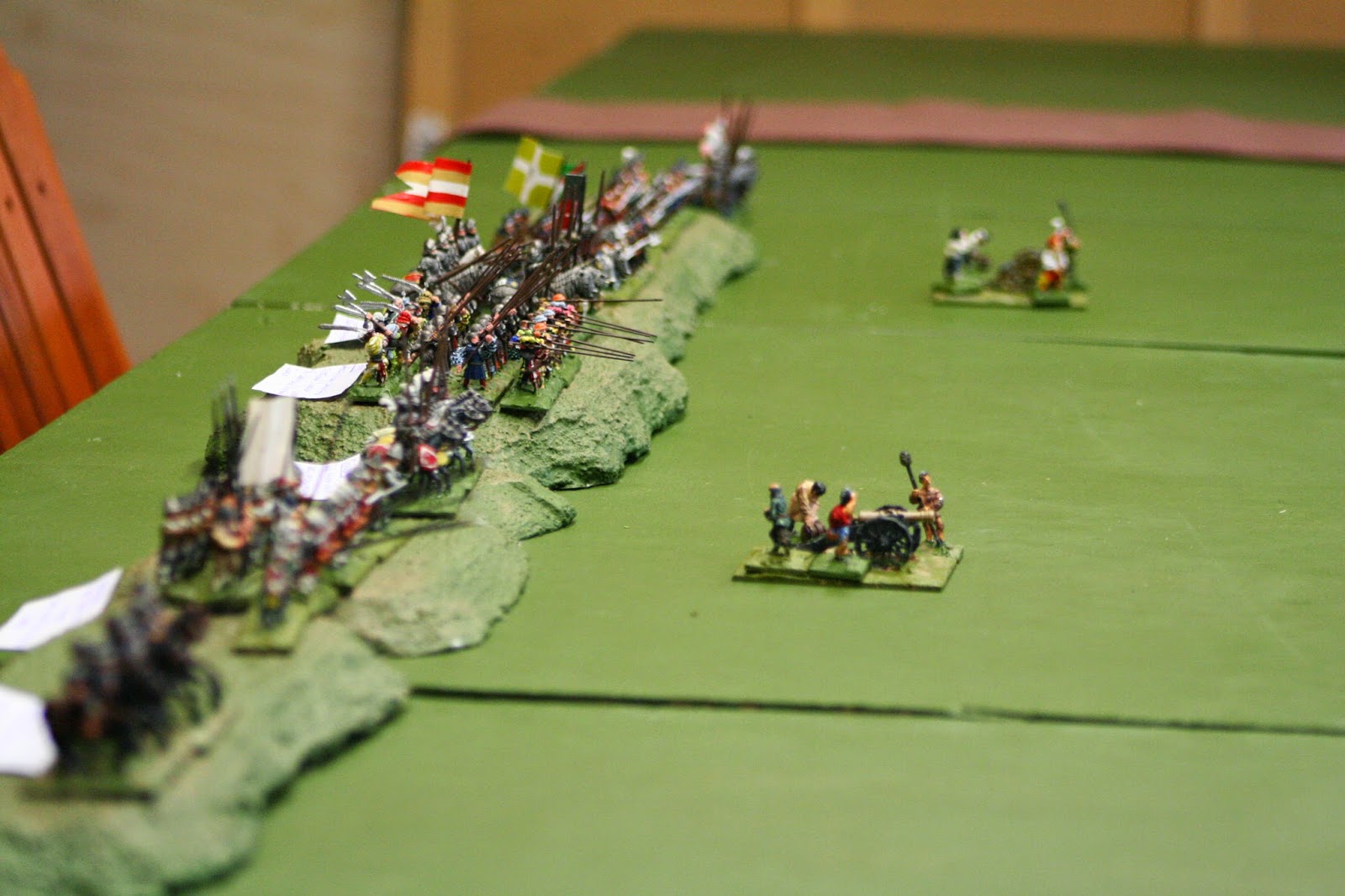 The French Army, arrayed on the crest line. Well, most of it. I'm shooting these pictures with a 300mm zoom lens so I can get close ups without leaning over the table too much, but it does rather restrict the wide shots. NB All these pictures were taken without flash, relying on the normal Shedquarters' lighting. 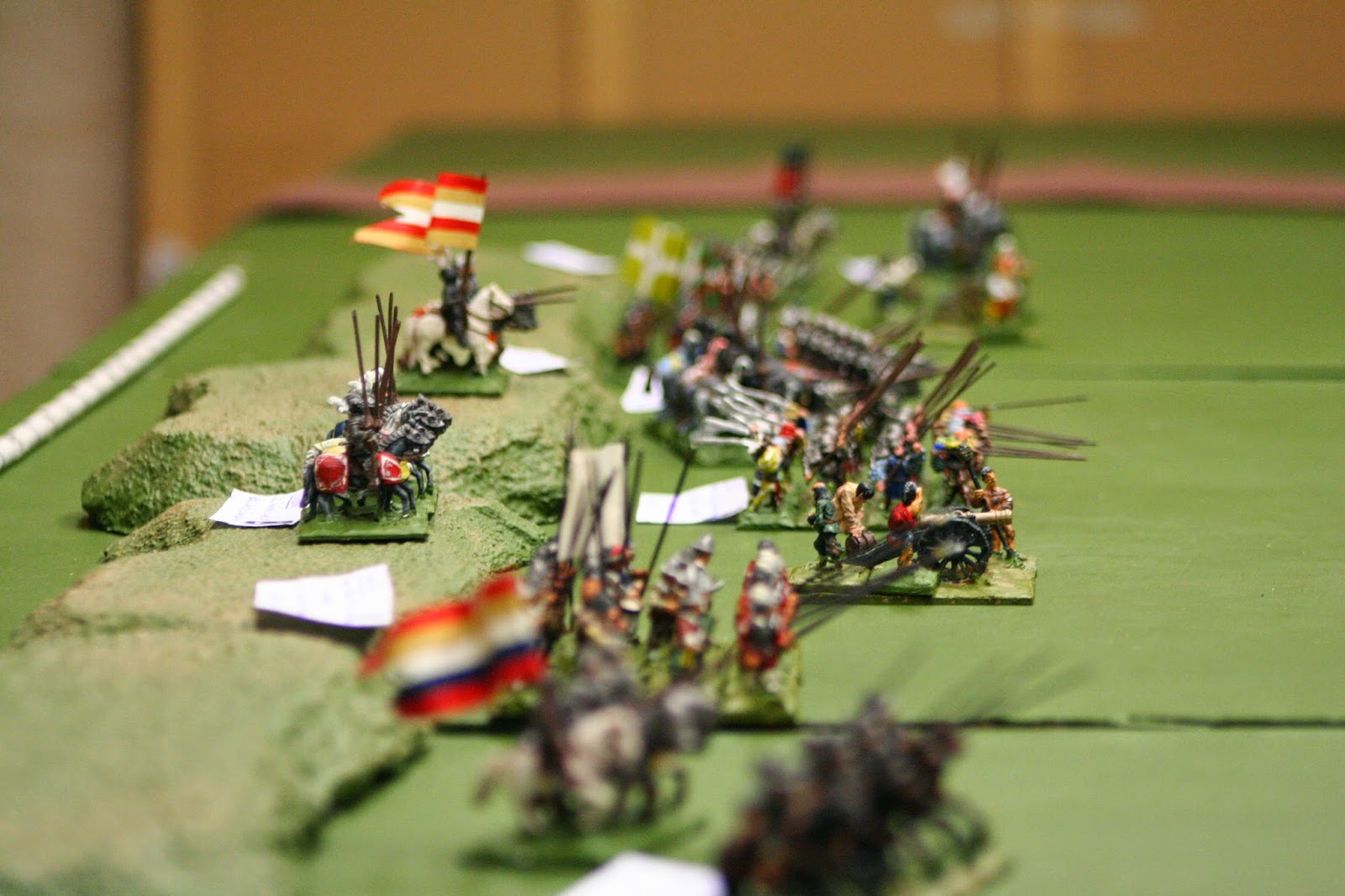 Richard won the initiative roll, and passed his turn. Phil got everything moving. A young, vigorous man in his first battle field command he was intending to show all he meant business. The French command figures are the elements of Gendarmes with big flags. 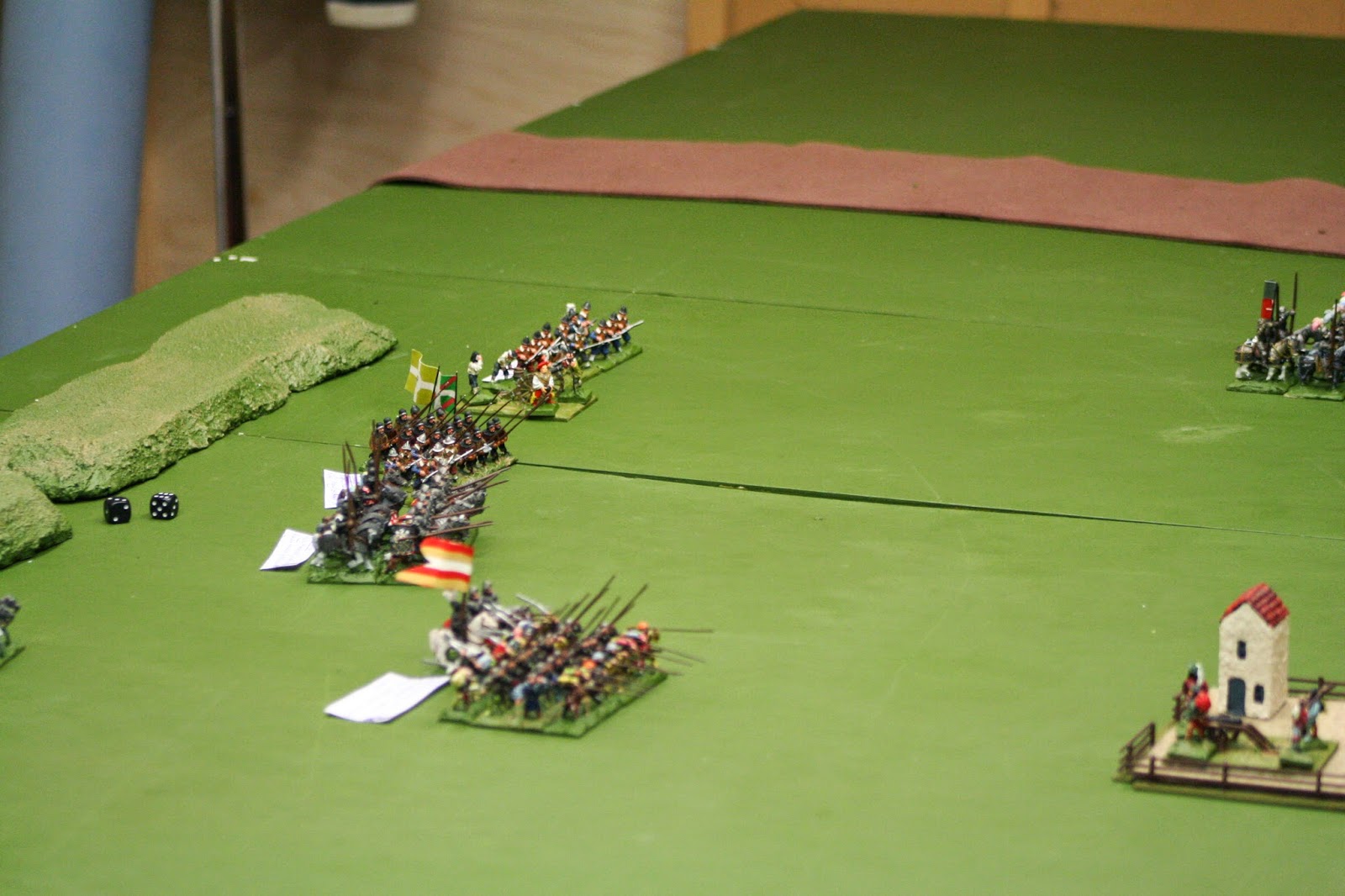 The Swiss put their heads down and  rushed across the table. Phil made full use of the chances for double or triple moves in this phase of the game. This helps to reduce exposure to artillery, but alas for him he lost a base in the Swiss early on, dropping the unit below the key "four ranks deep" in one file. 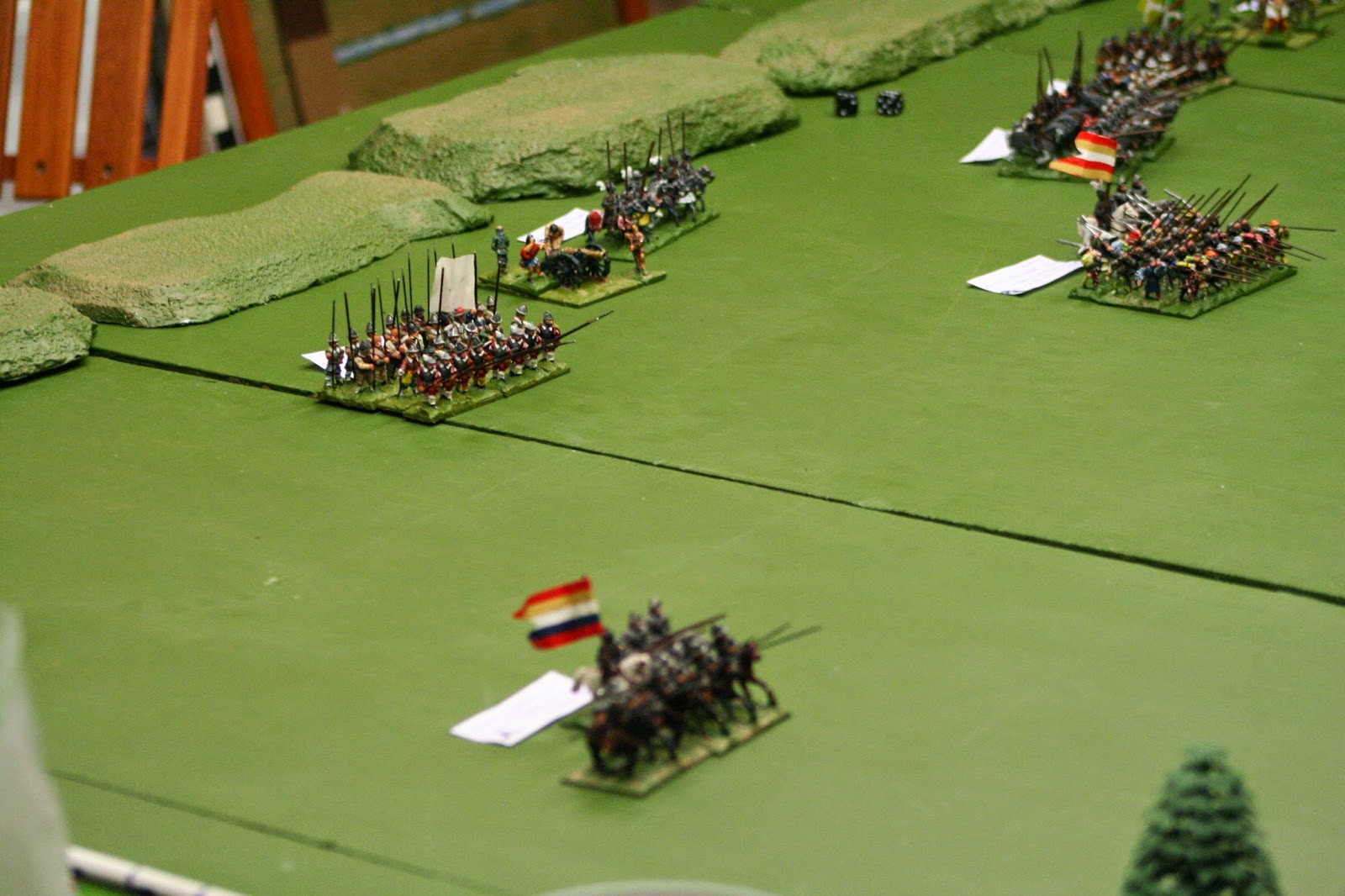 The rest of his foot lagged a bit behind, but Des Thermes and his "light cavalry" (actually fairly heavily armoured) near the camera pushed ahead in an attempt to get to grips and turn the Imperialist flank. NB FoG-R experts will note that I'm using two element units and so exposing units to a high risk of auto break. Because this was needed to fit the game in the space and time available I dispensed with the auto break rule for small units. 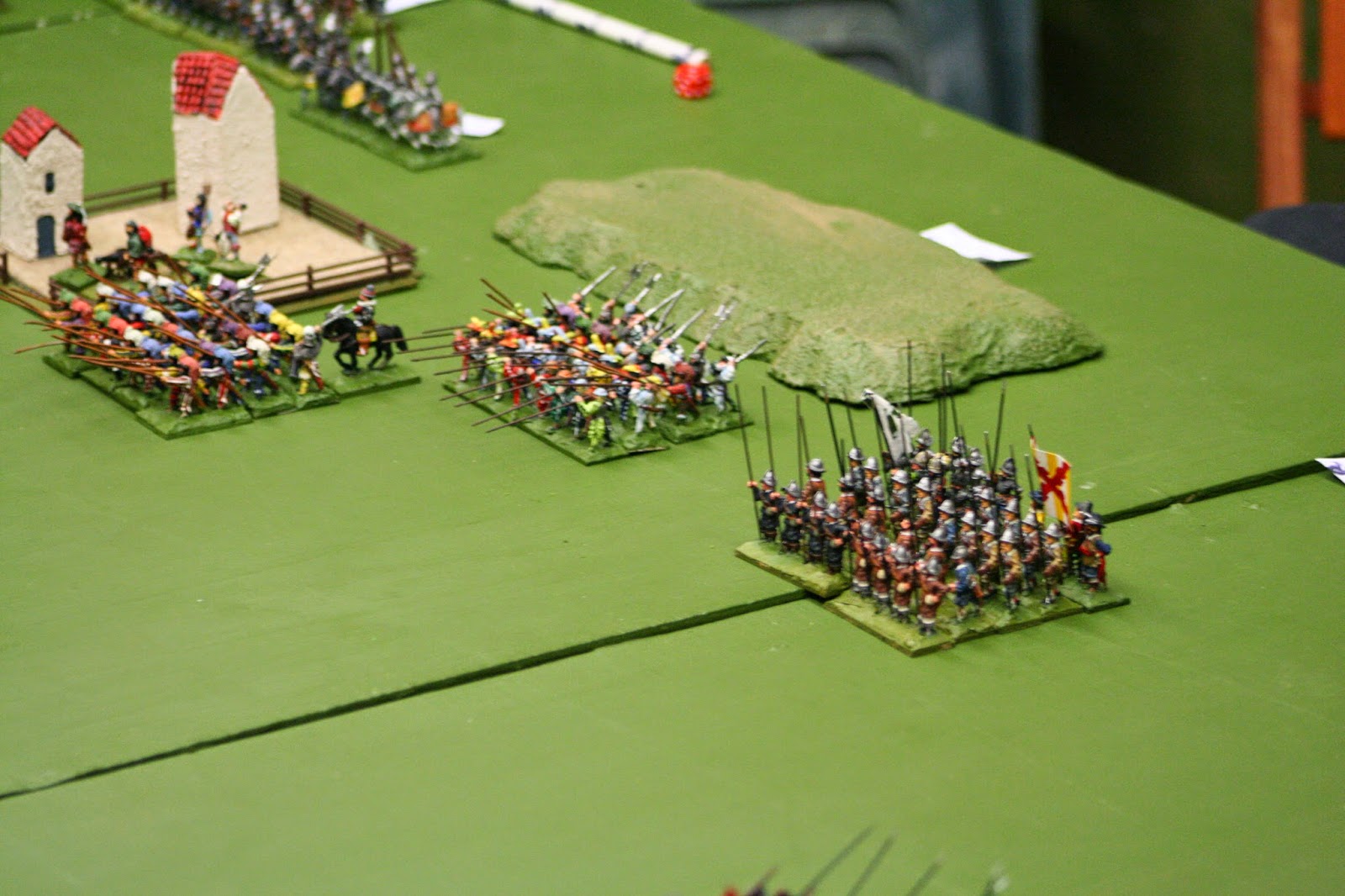 Richard responded to Phil by coming off his base line. He had an advantage in infantry units and was looking to break this flank and refuse the right with his tercio. 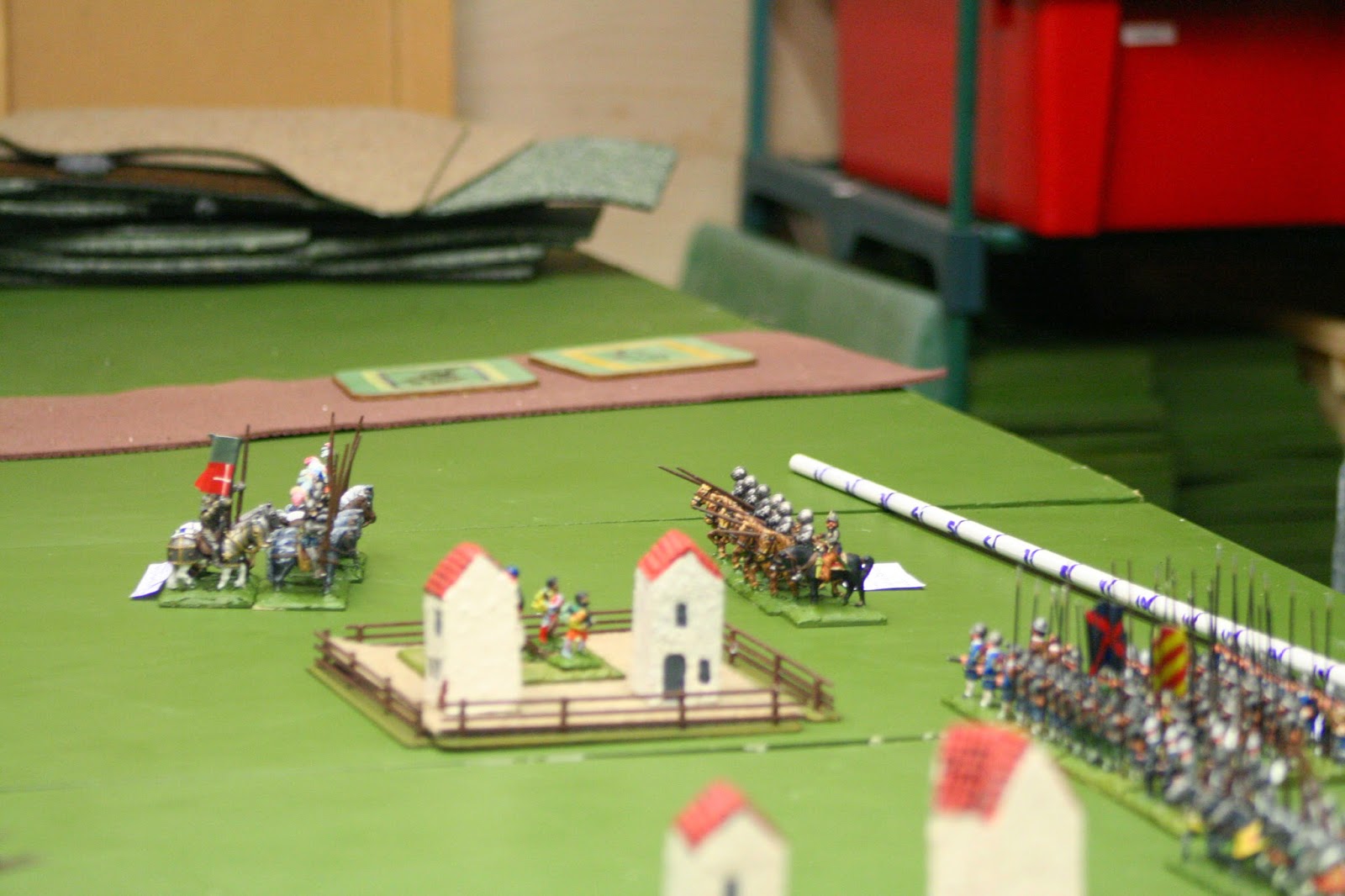 Phil, on the other hand, reckoned he could get a unit of "Mounted Archers" behind Richard's right flank. 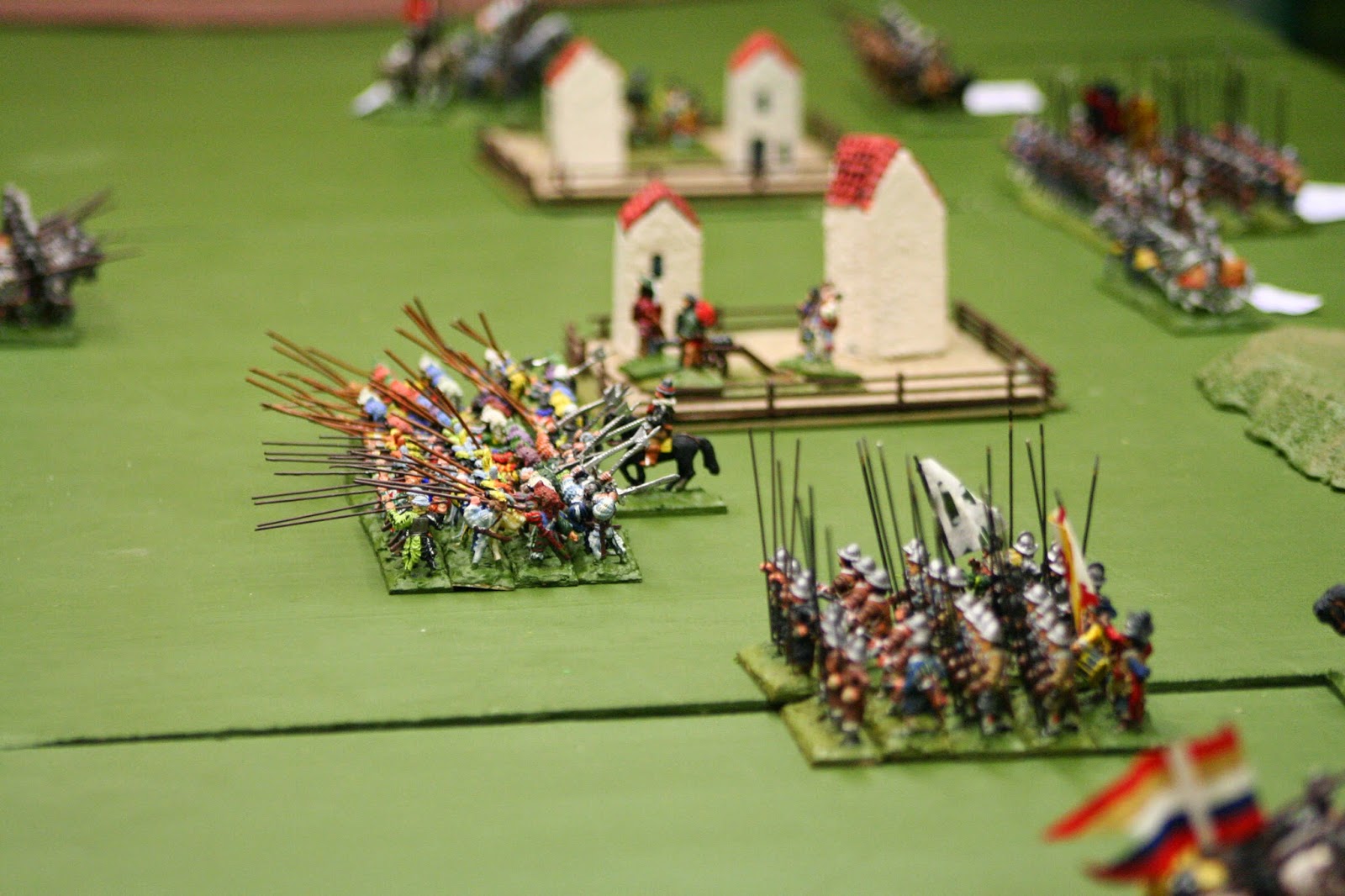 That's a chunky group of Landsknechts Richard has there. 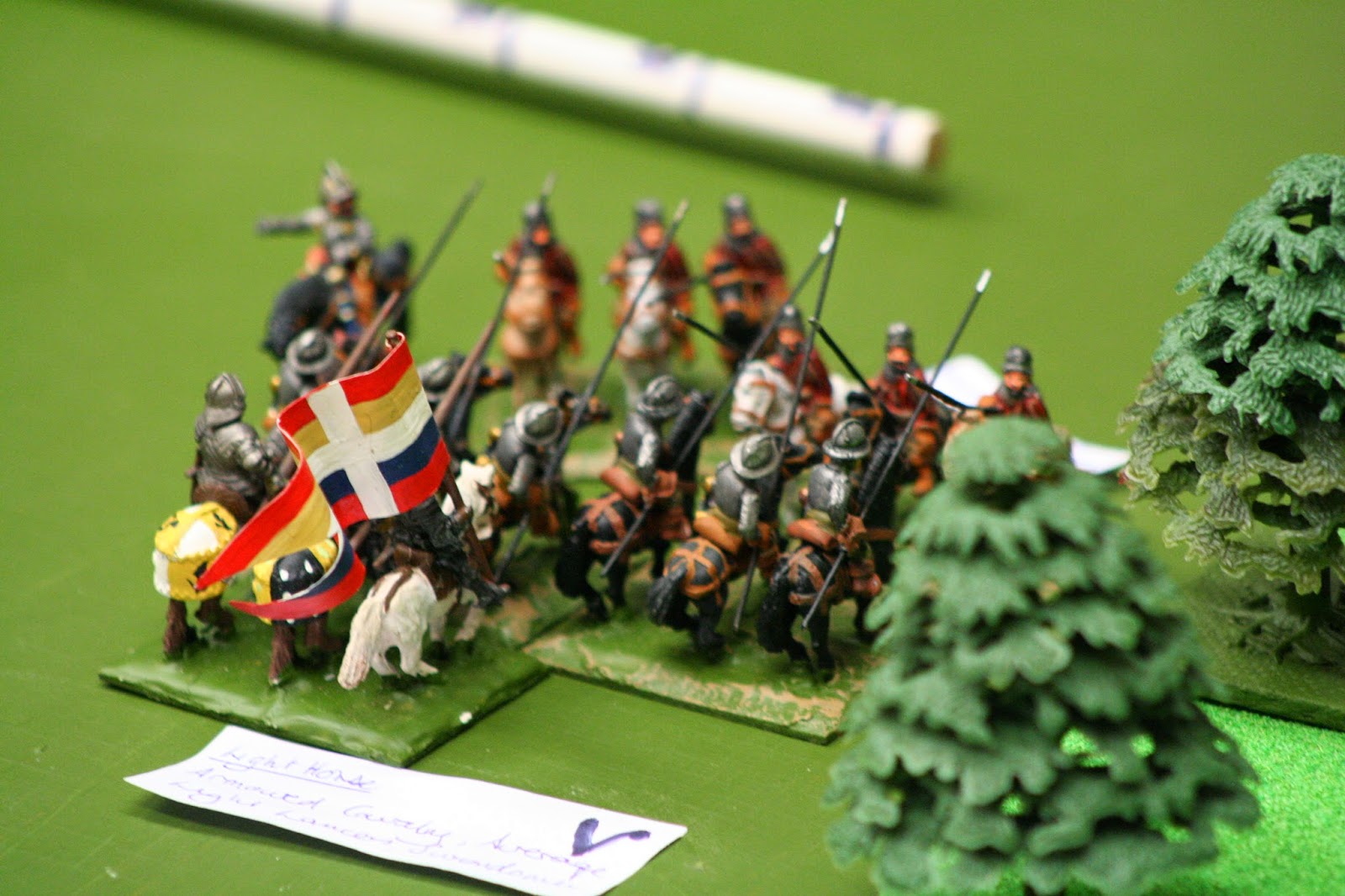 The clash on the French right started badly for Phil. The Impact phase achieved nothing. On reflection I should have give the French cavalry an advantage to help towards a more historical outcome. As it was both sides were evenly matched. The best that could be said for Phil was that when he finally lost the combat Richard's cavalry wasn't already behind his flank. If the combat had been fought more in the centre of the board it would have made a big difference to the final result. 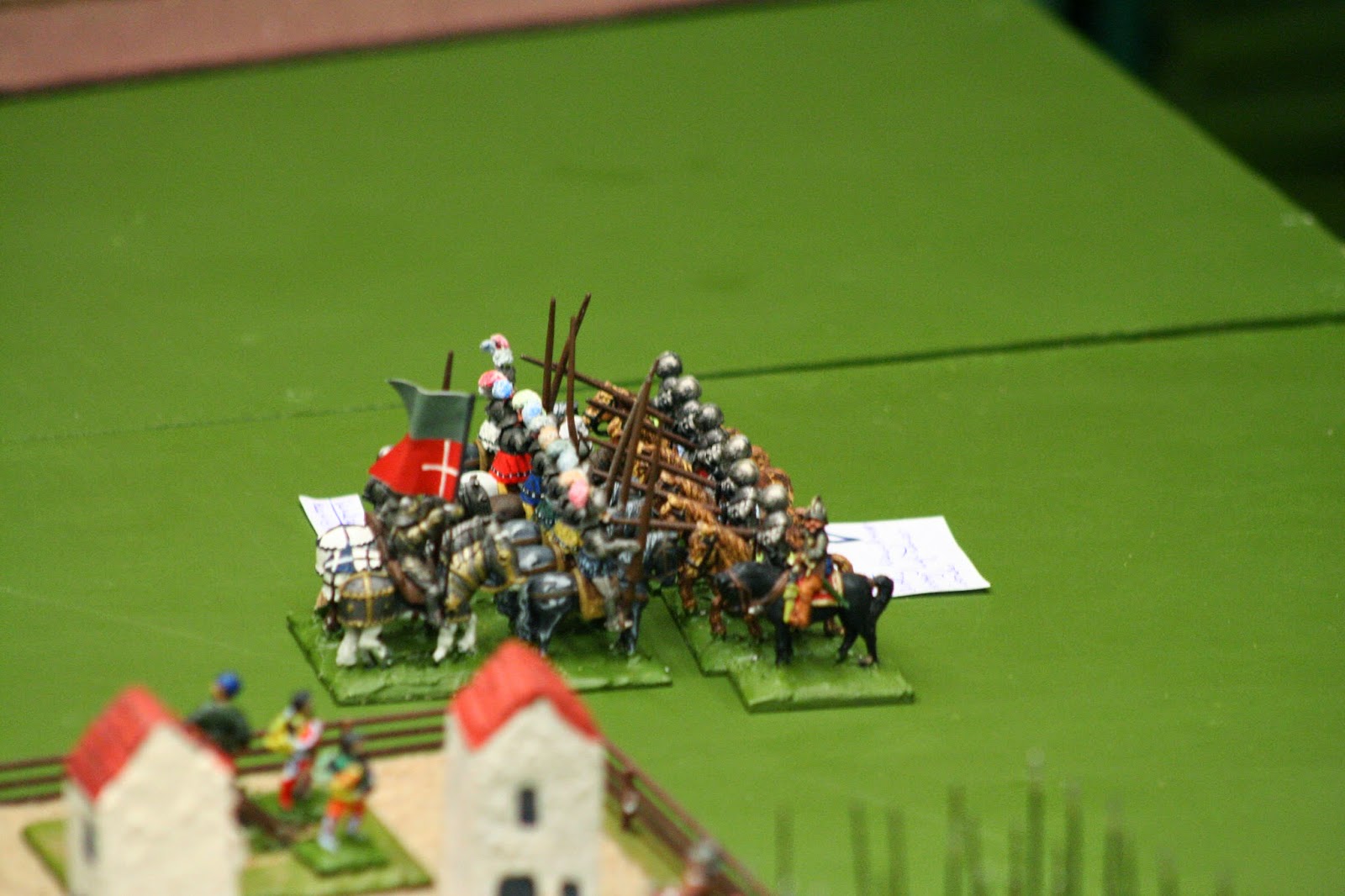 The other wing was a different story. BTW The pieces of parer are the unit descriptions, with a big, black, letter saying what Battle the units are in (Vaward, Main or Rear) 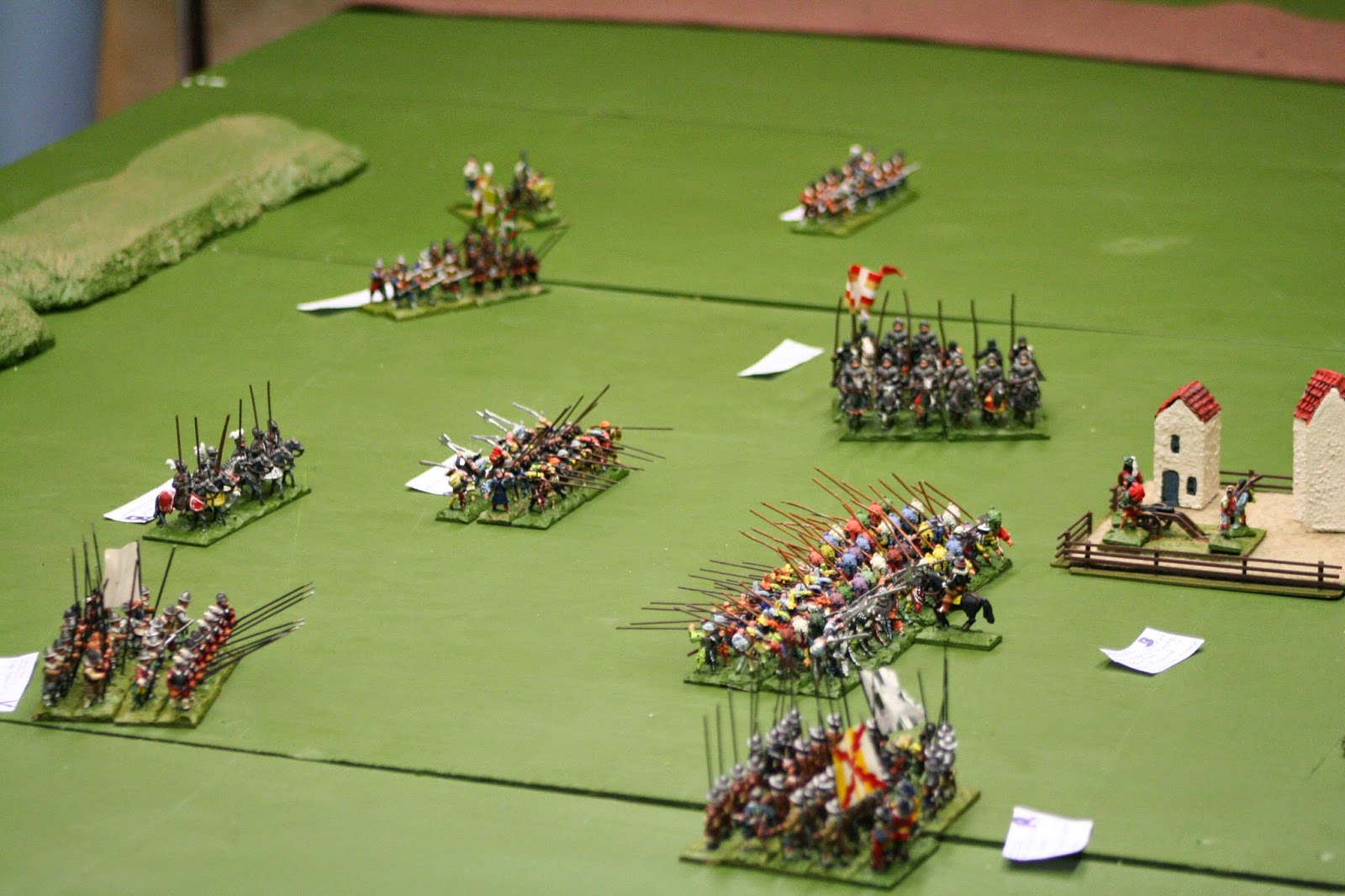 The Swiss are now two bases down, but Phil pushes on. He wants to draw the landsknechts on, pin them with the Swiss, then hit them flank or rear with his main cavalry, seen wheeling inwards in the centre. 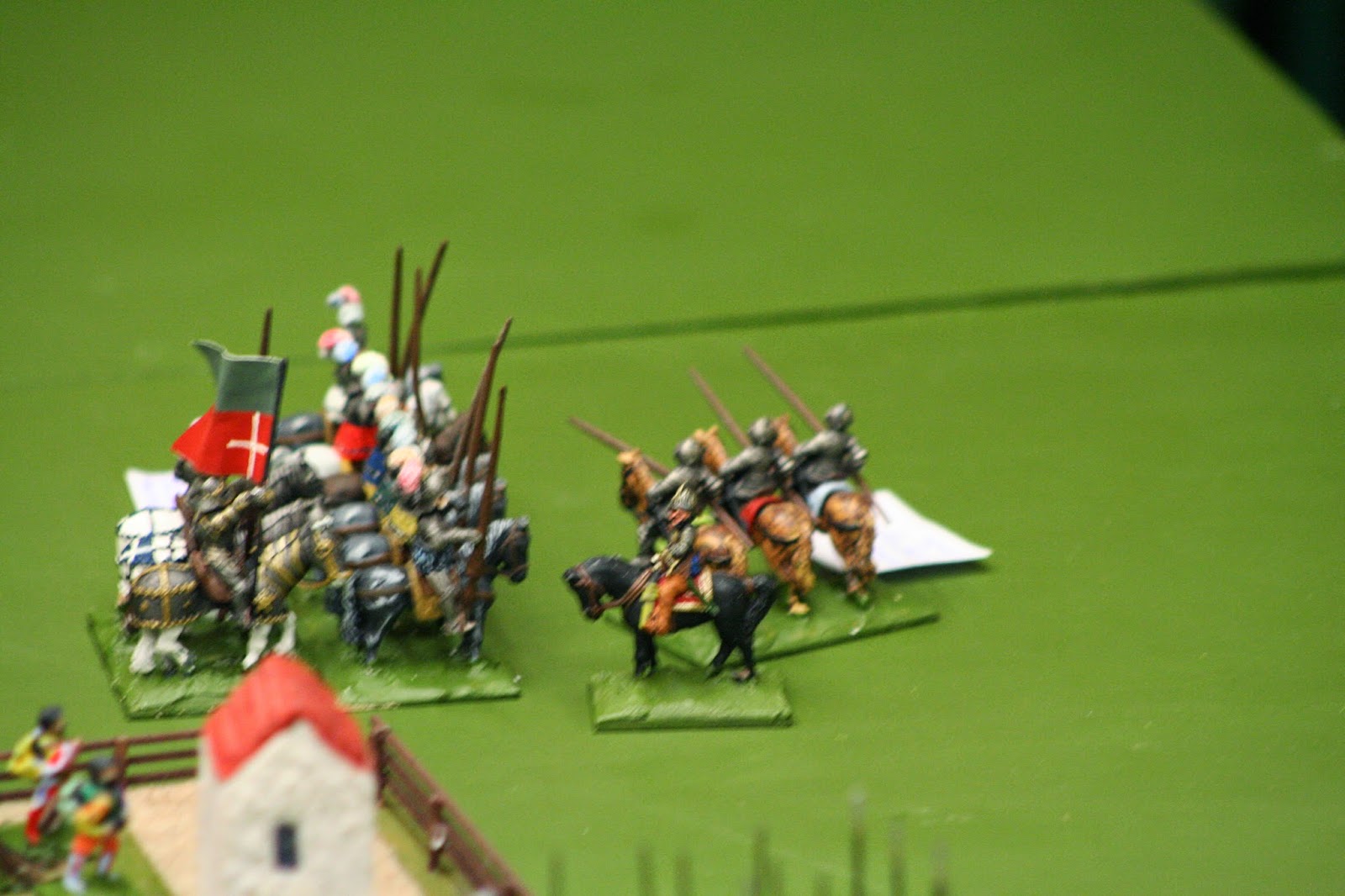 Richard's right wing cavalry collapsed rather quickly. His General did get away. In the end. 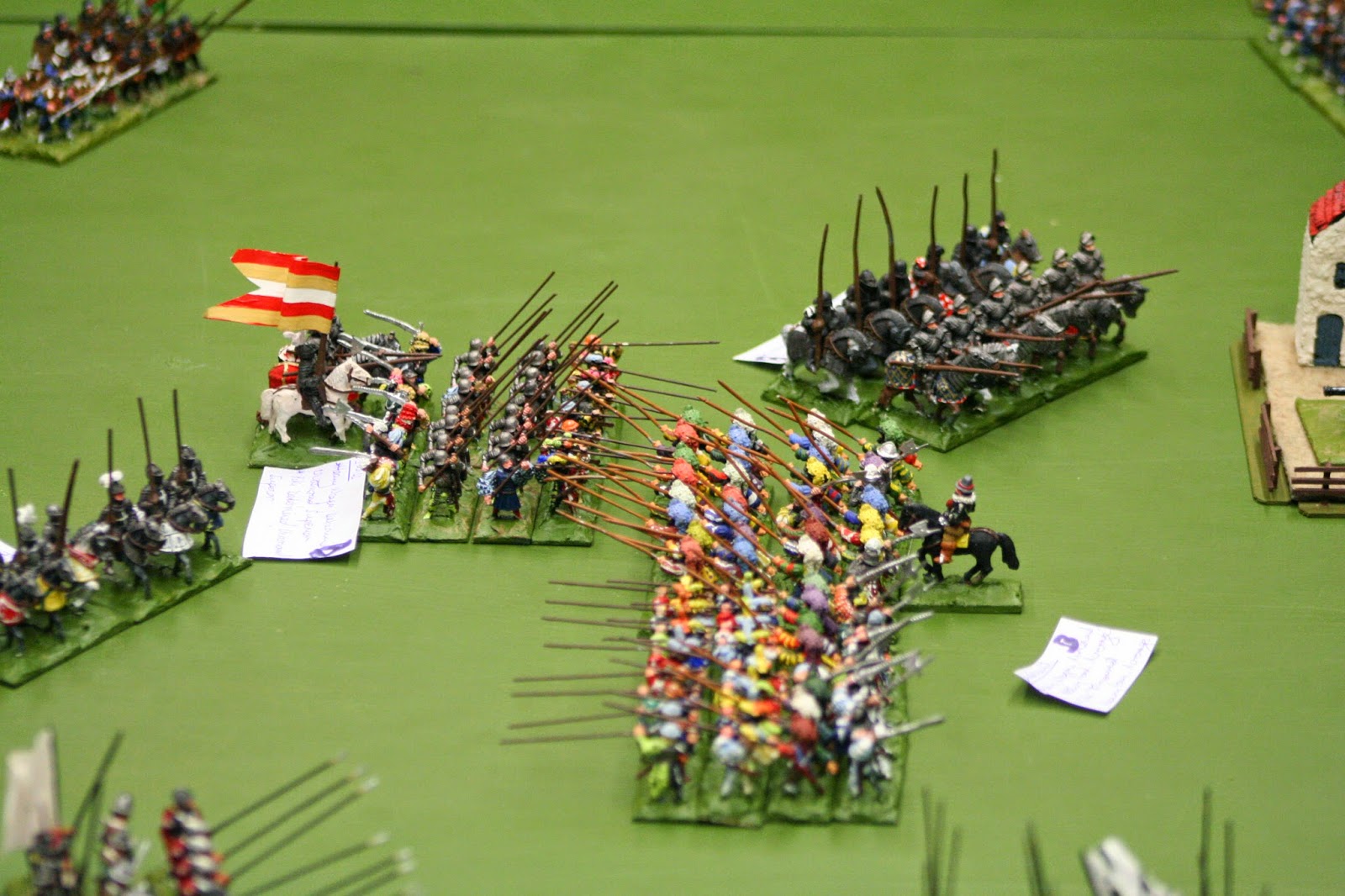 The centres now closed. The more sharp eyed amongst you will note that the Swiss are up to full strength. In view of the poor performance of artillery in the battle I had a secret rule that put casualties back when contact occurred. This meant that both sides were wary of the artillery, but no one was put out of the game by it. 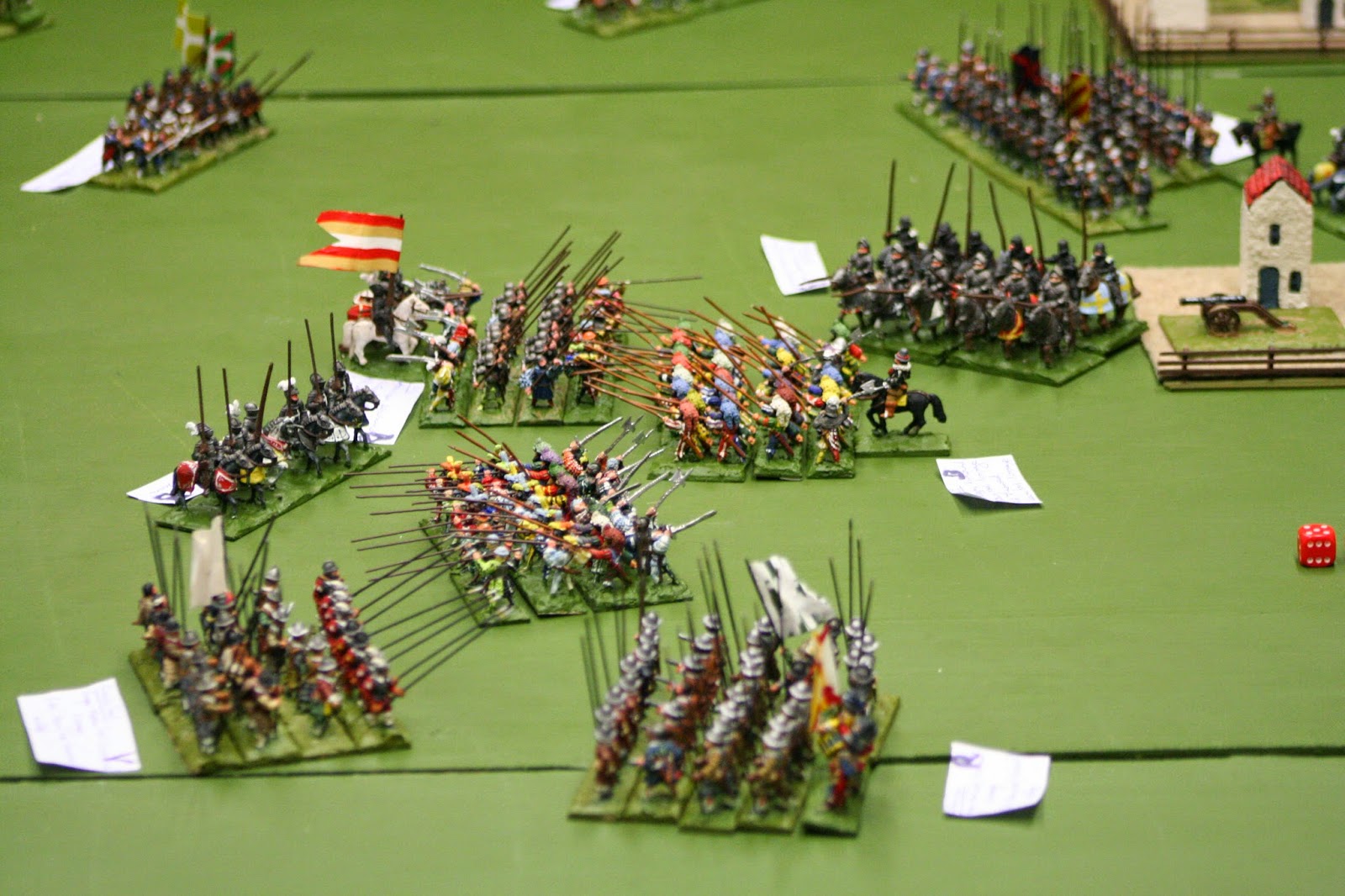 Richard has moved his Tercio and supporting Gendarmes up to threaten Phil's massed Gendarmes, but they are intent on wheeling into the rear of those landsknechts anyway. 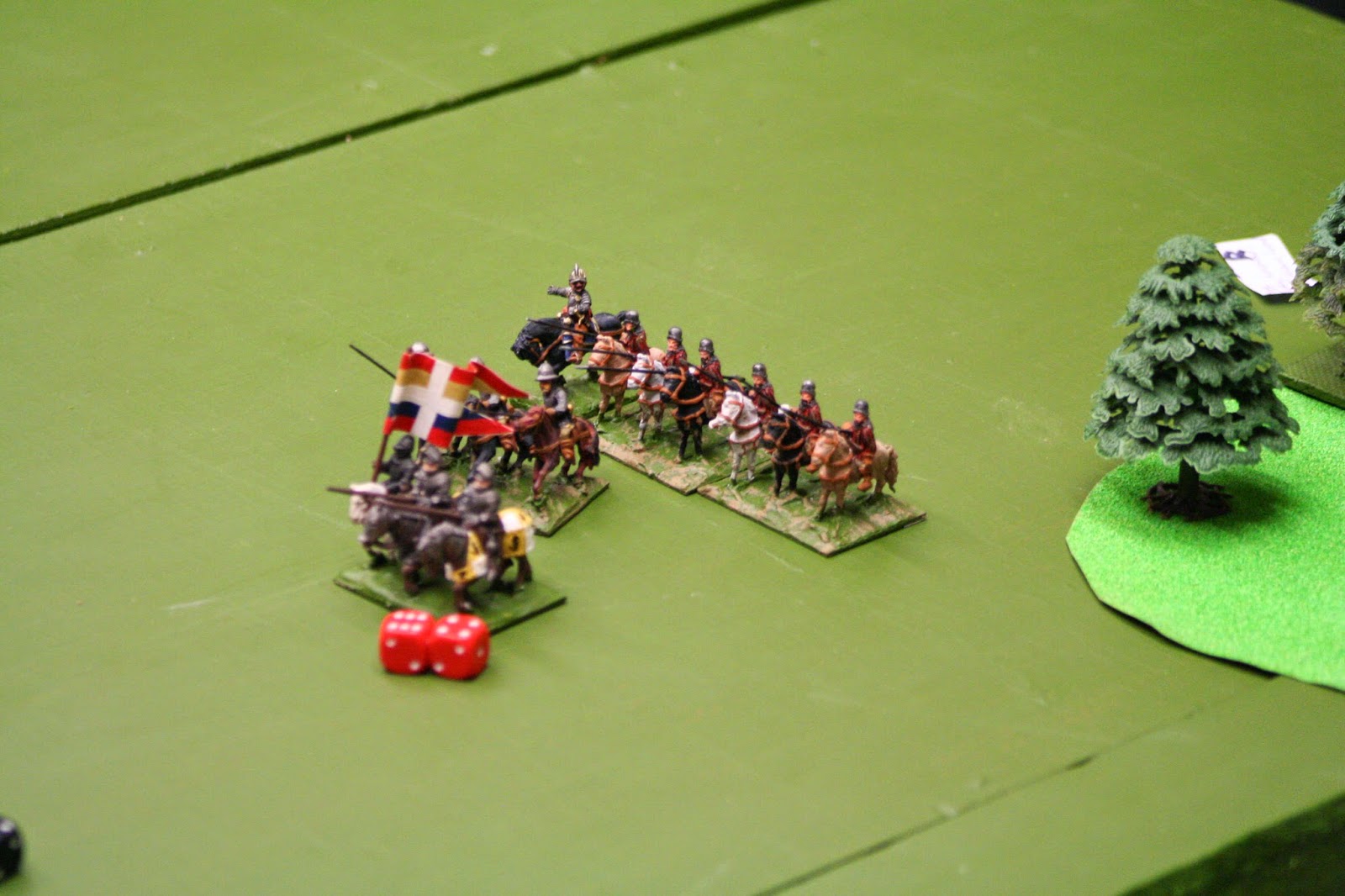 Phil's right hand cavalry, meanwhile, gave up the ghost and lost their commander to boot. All Richard had to do now was to get his cavalry up and into action. Had he made a mistake by choosing to fight so far back? 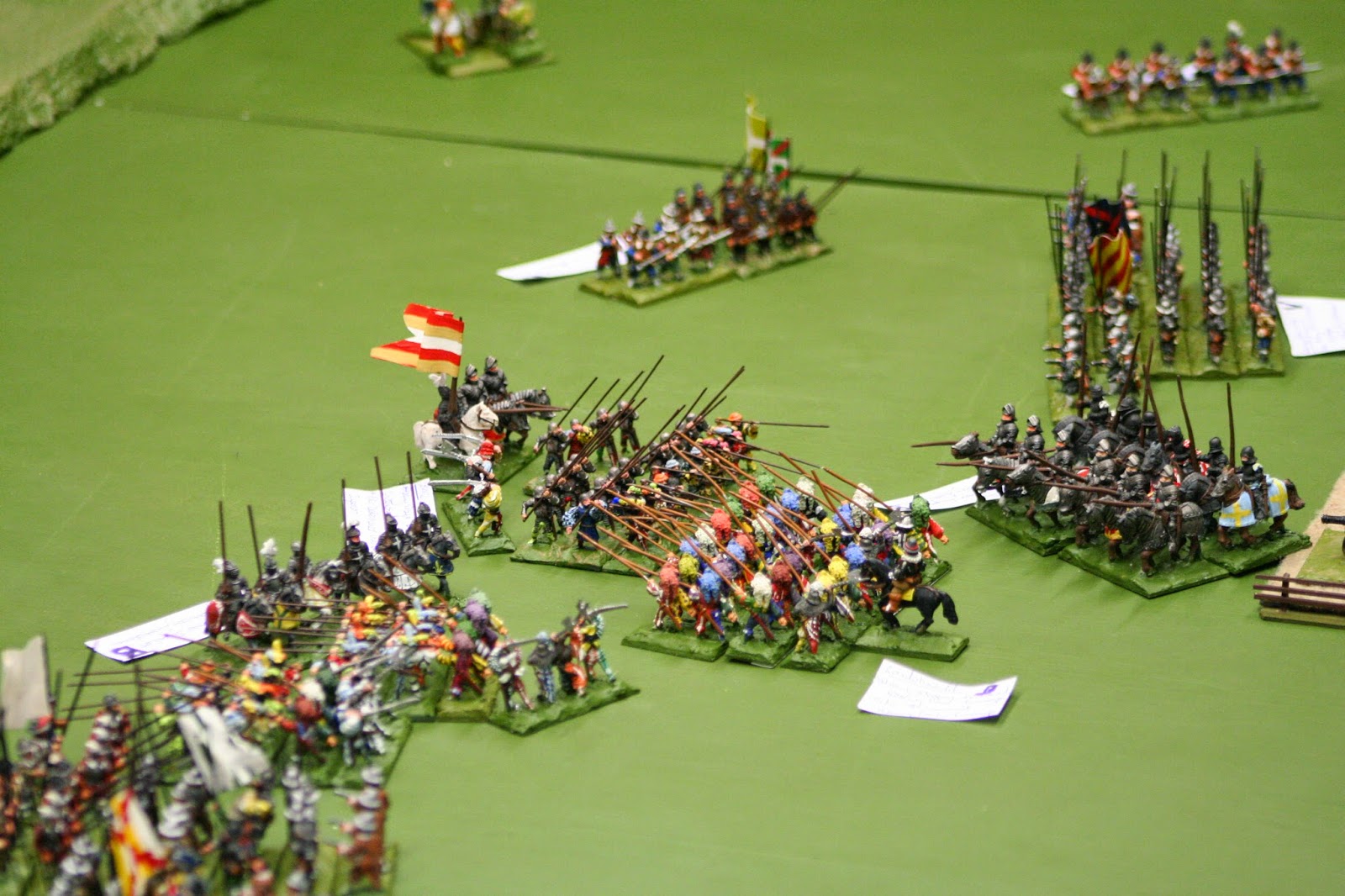 Everything has now hit everything else, pretty much. The French pike block and the Italians facing them were each given an arquebus volley as part of the impact phase to simulate the tactic on the day of embedding a file of arquebusiers in the head of the column to shoot the opposing side's captains. This worked to the French's favour. Elsewhere the Swiss were getting the rough end of it, and only the intervention of a small unit of French Gendarmes was holding up the unit of landsknechts closest to the camera which would otherwise have crushed the French foot. This charge went really well for Phil, disrupting the landsknechts. The added rule of letting him break off at the end of an impact phase was politely waved away as his eyes focussed on the opportunity this gave him. 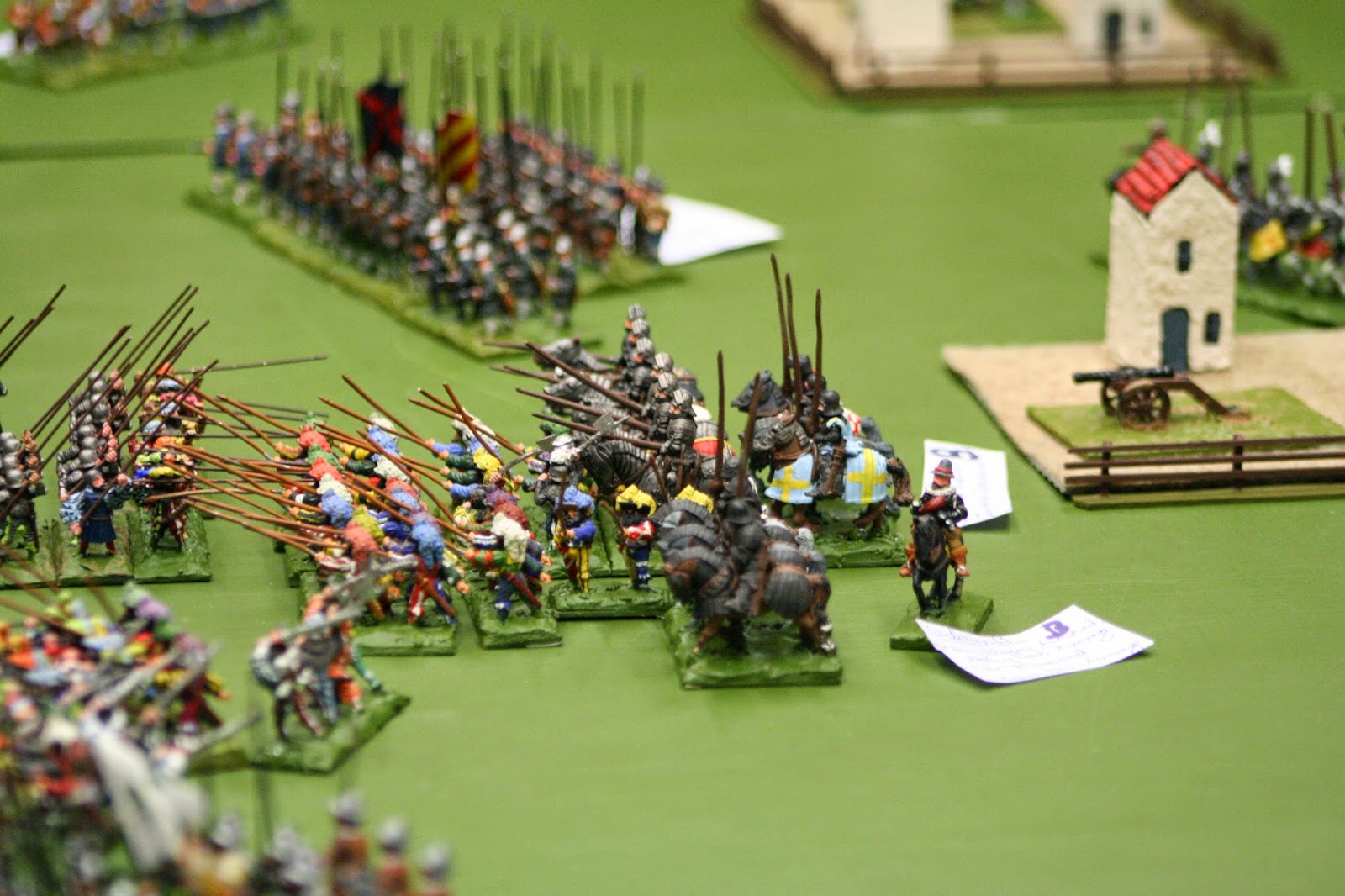 Bang! The Gendarmes hit the rear of the landsknechts..... 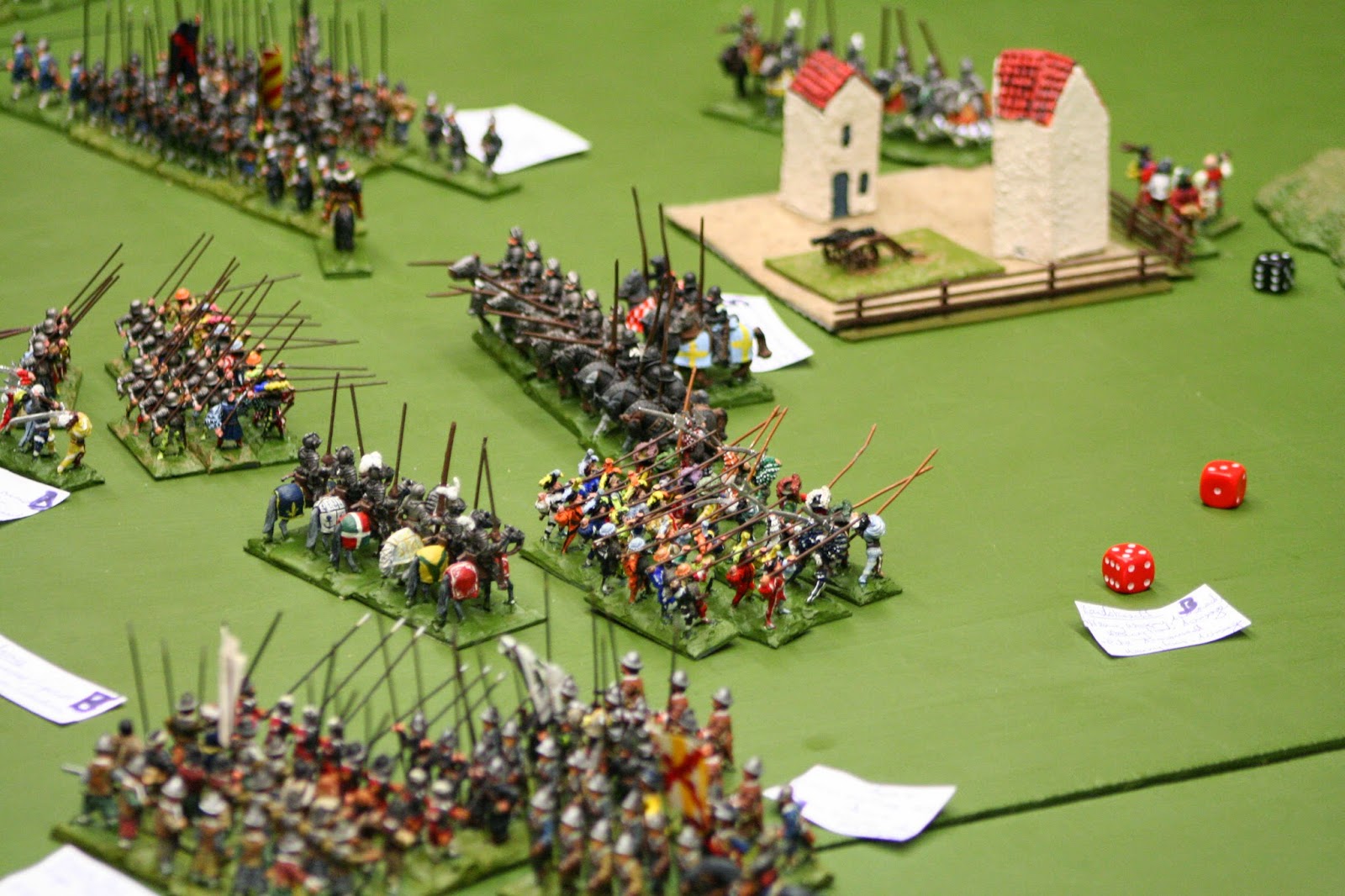 ... which they wipe out, saving the blushes of the Swiss who looked like they were taking a beating. At the same time fortune favoured the other, smaller unit of Gendarmes, who together with the French foot broke the other landsknecht unit.... 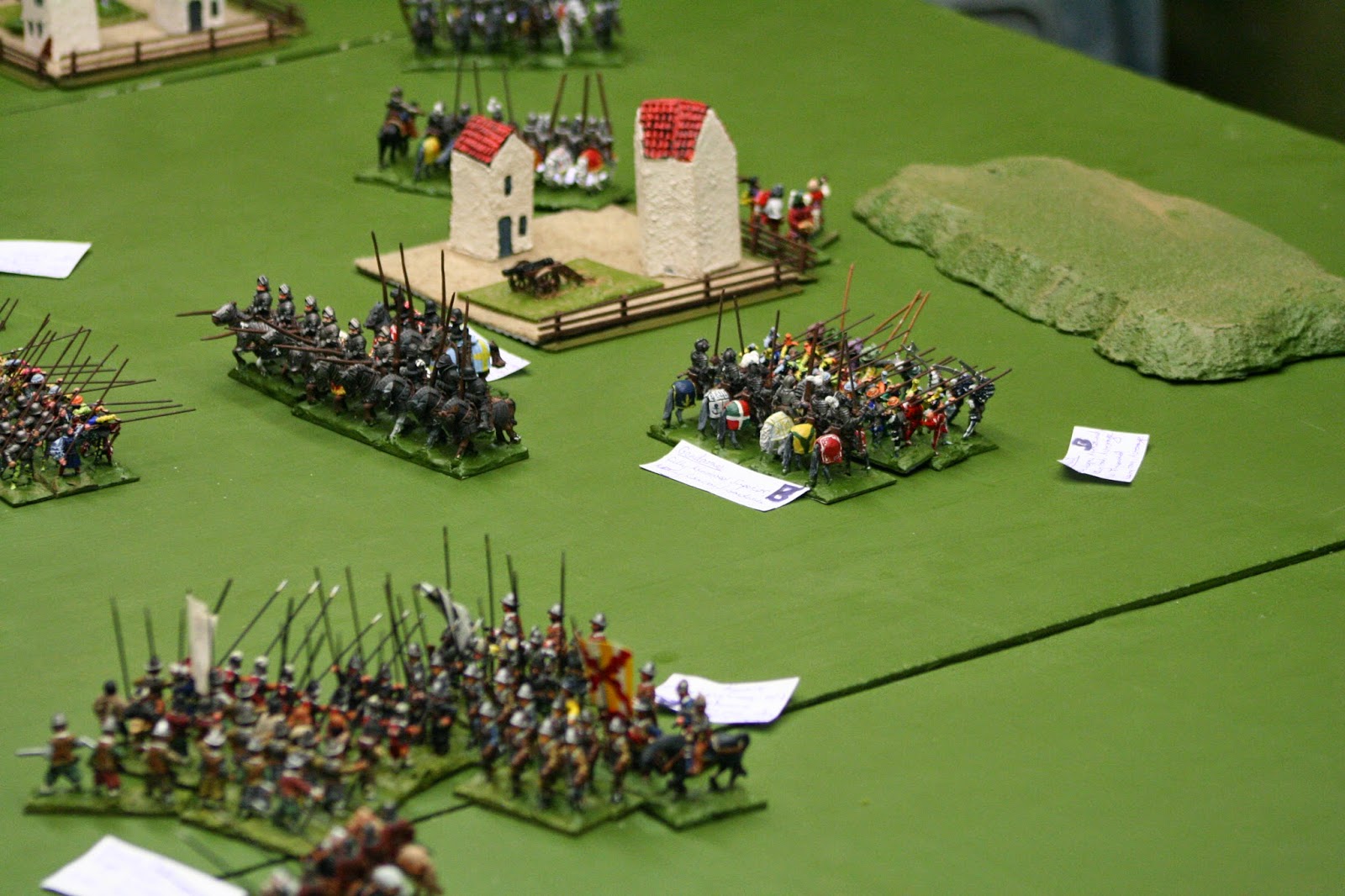 ...pursuing them through the gap in the line. 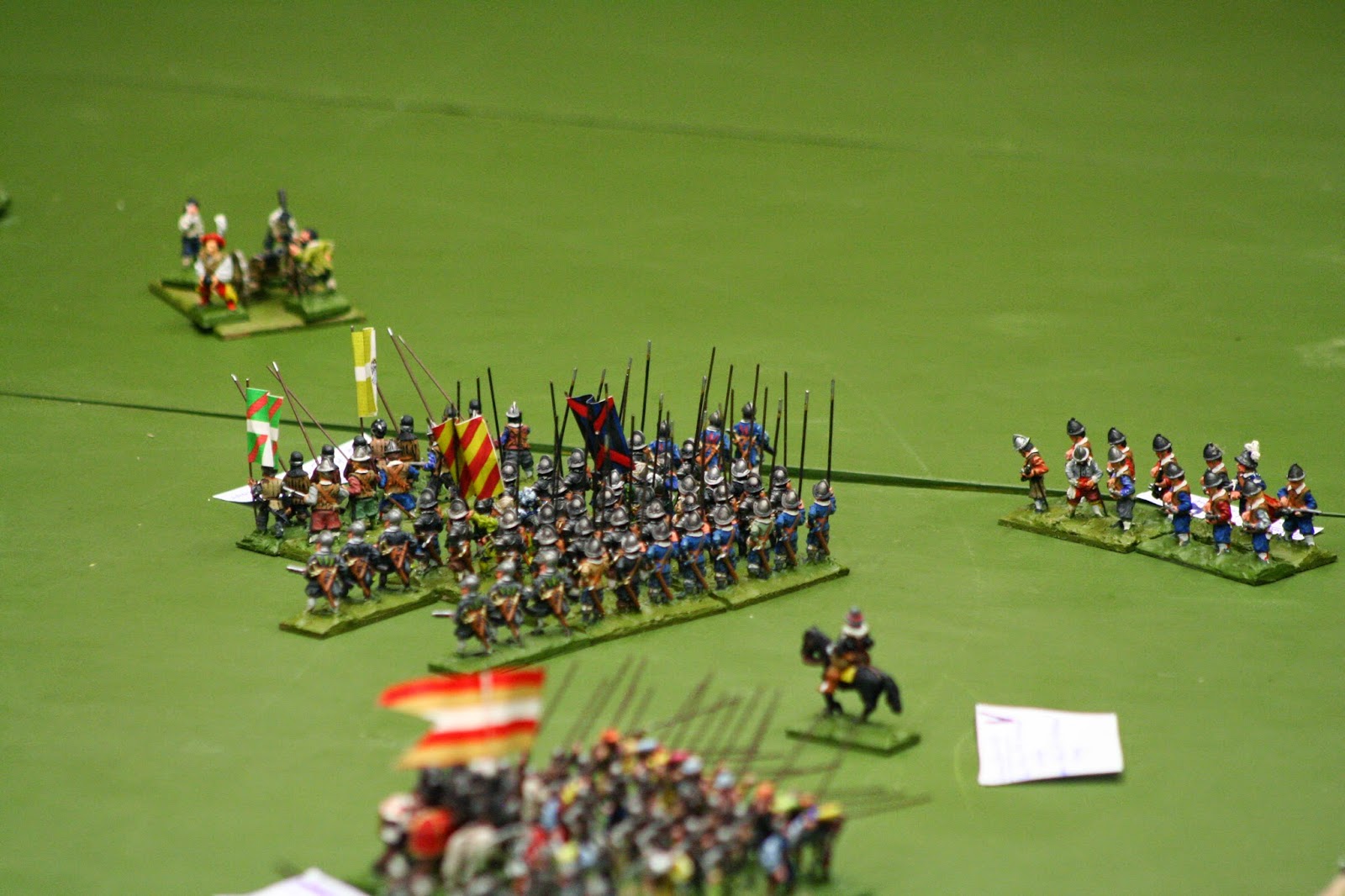 The Tercio finally advanced and got to grips with the Gruyere foot. These were soon destroyed. Del Vasto had fled the centre of the board to take refuge with the Tercio. 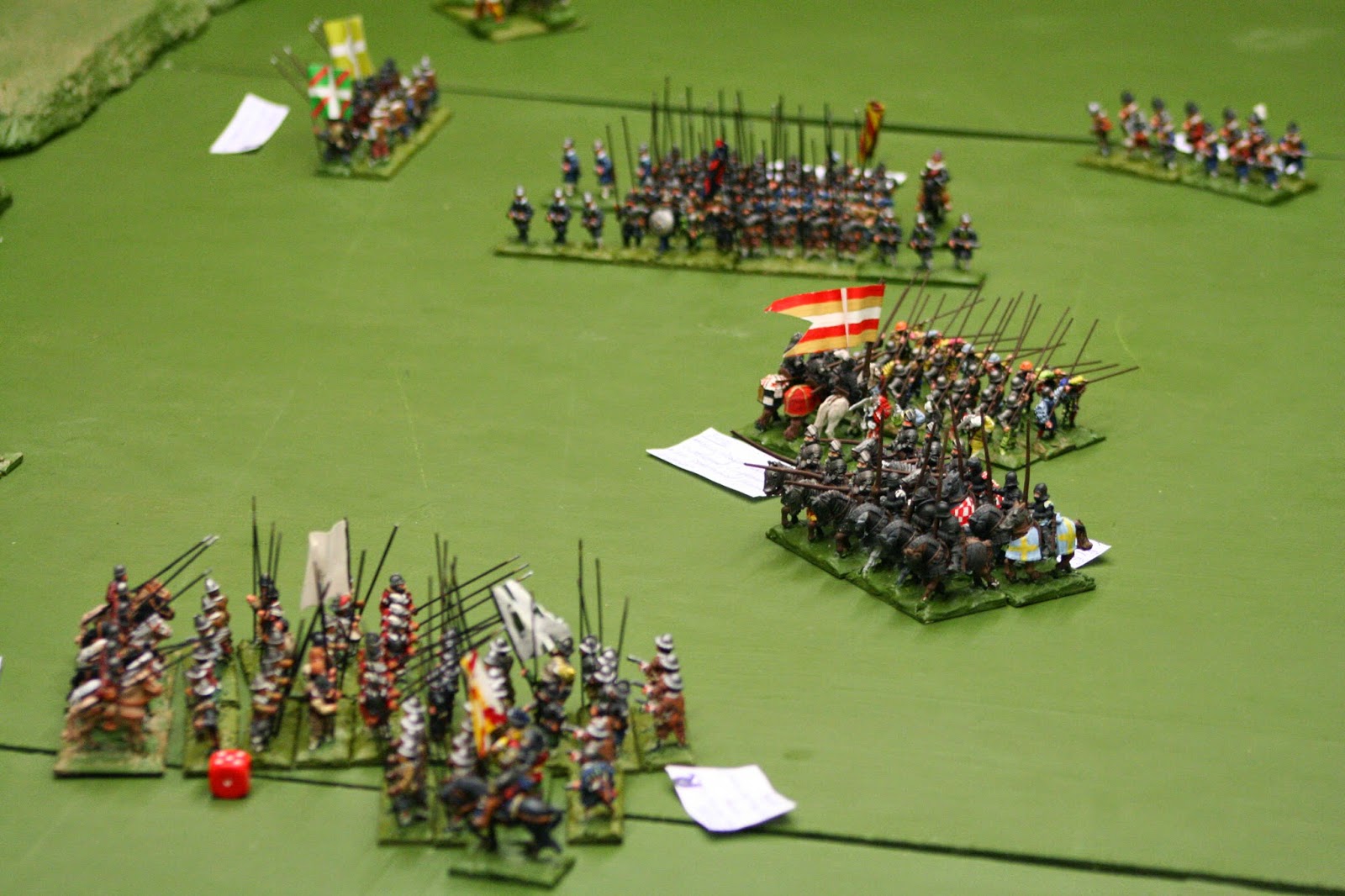 All too late to save Monluc's French foot, alas. The Italian horse finally got round and caught them in the rear. Trapped by the Italian foot to the front they were crushed. 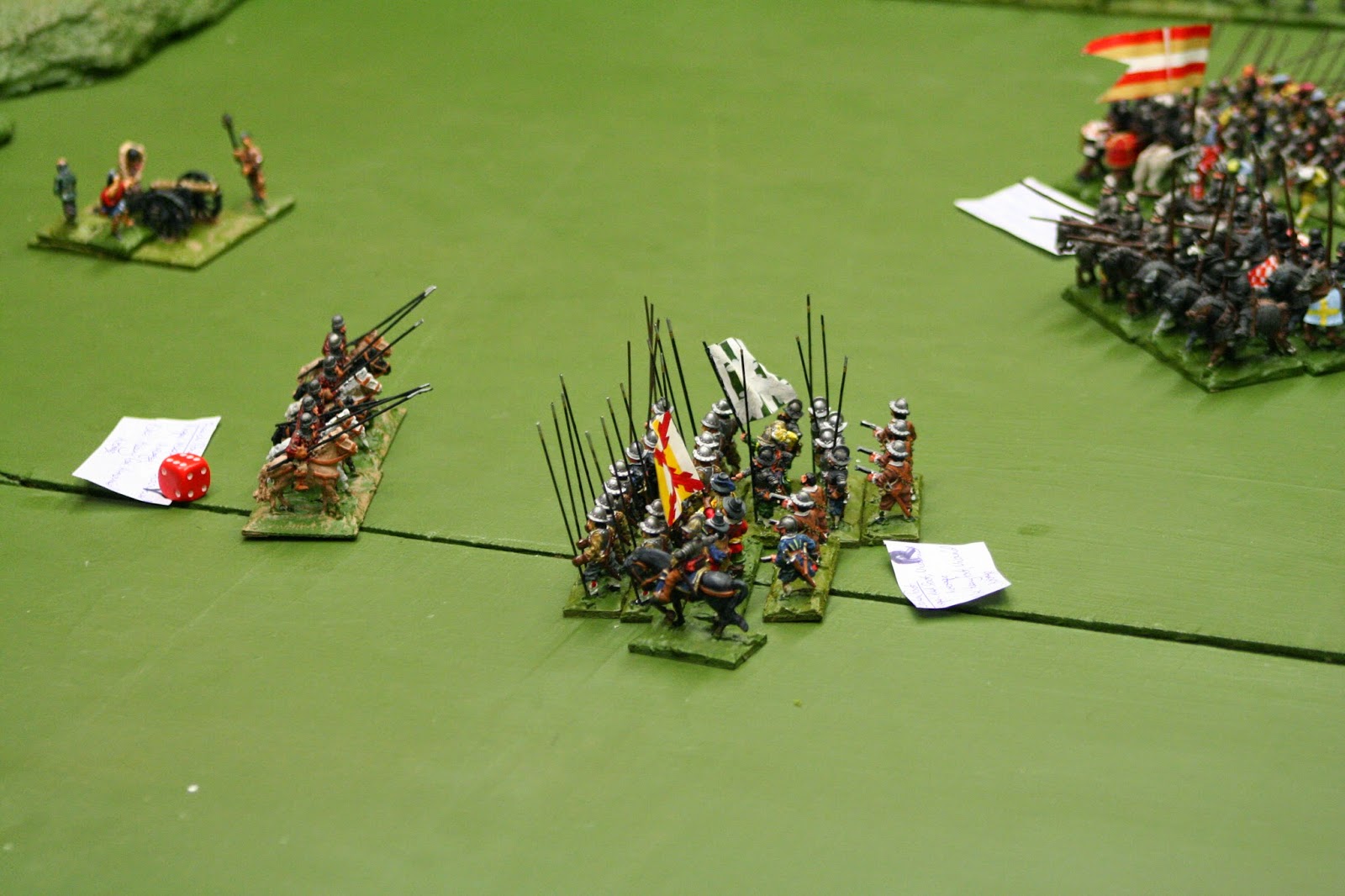 The good news was that Monluc wasn't killed. Not much else left, however. 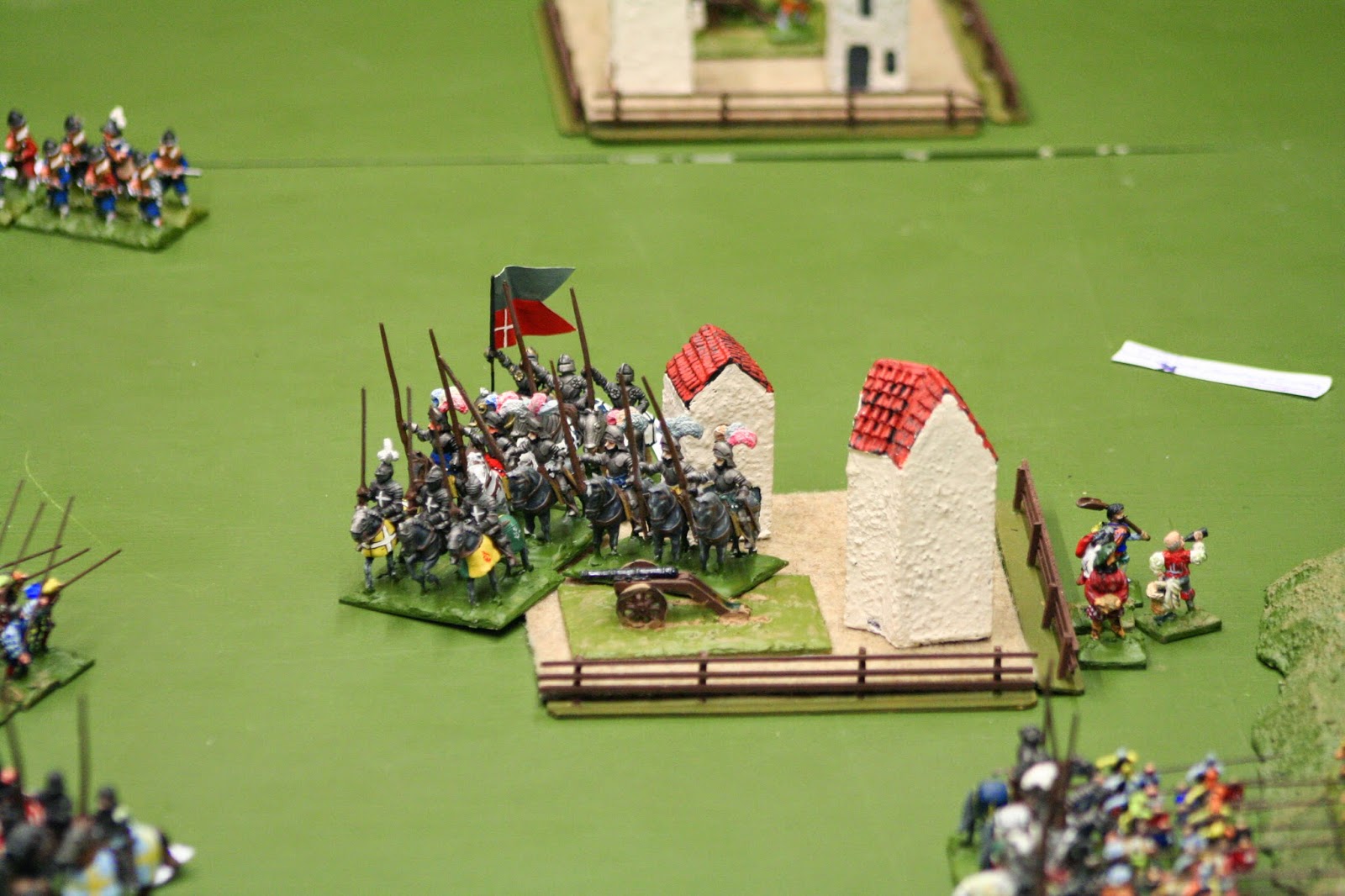 The Italian Gendarmes who had done nothing all game except keep out of trouble were finally hunted down by Dampierre's horse from the left wing and broken. 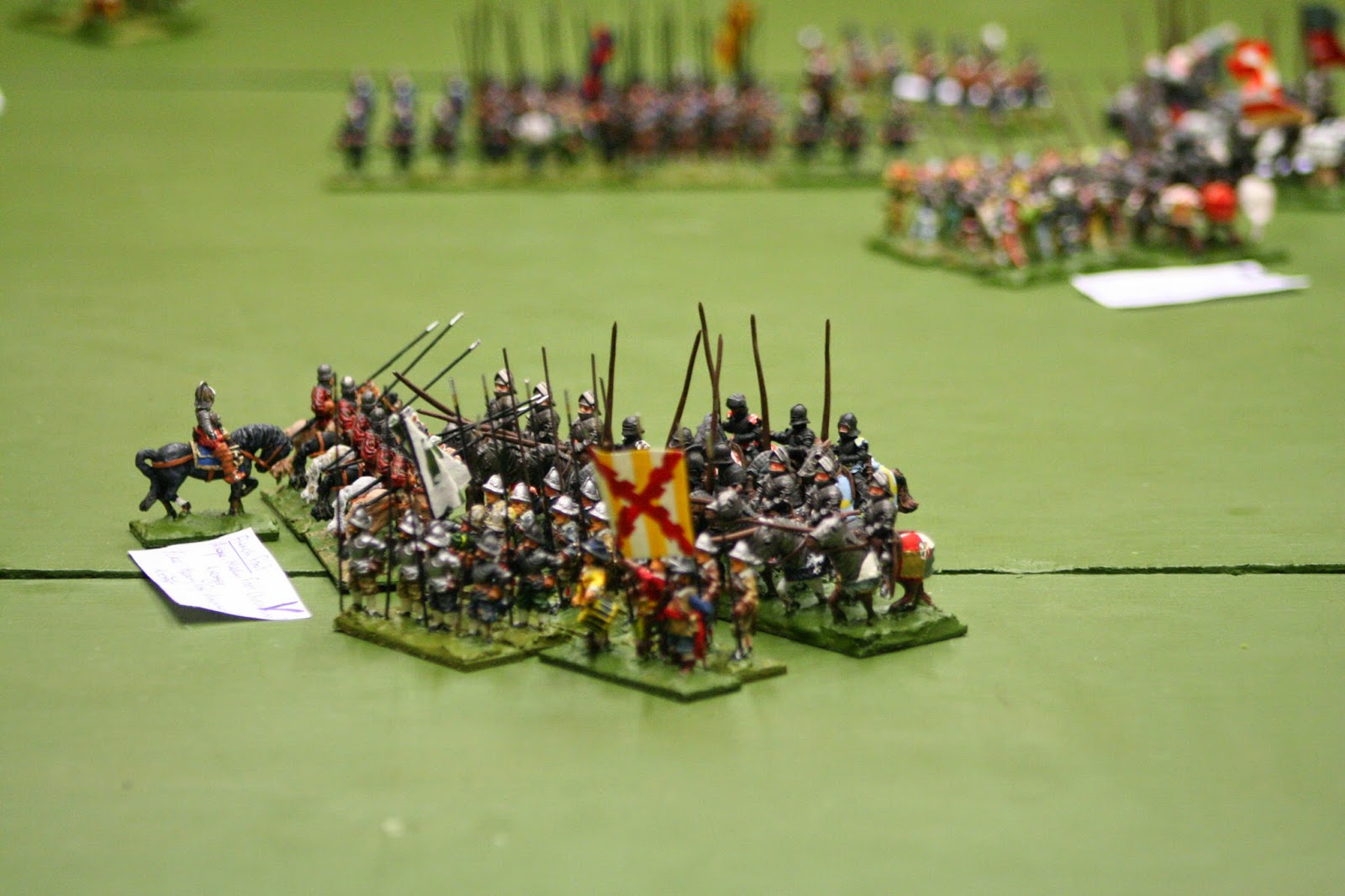 In order to stop Richard exploiting his victory over the French foot Phil threw his Gendarmes into combat with everything they could hit. 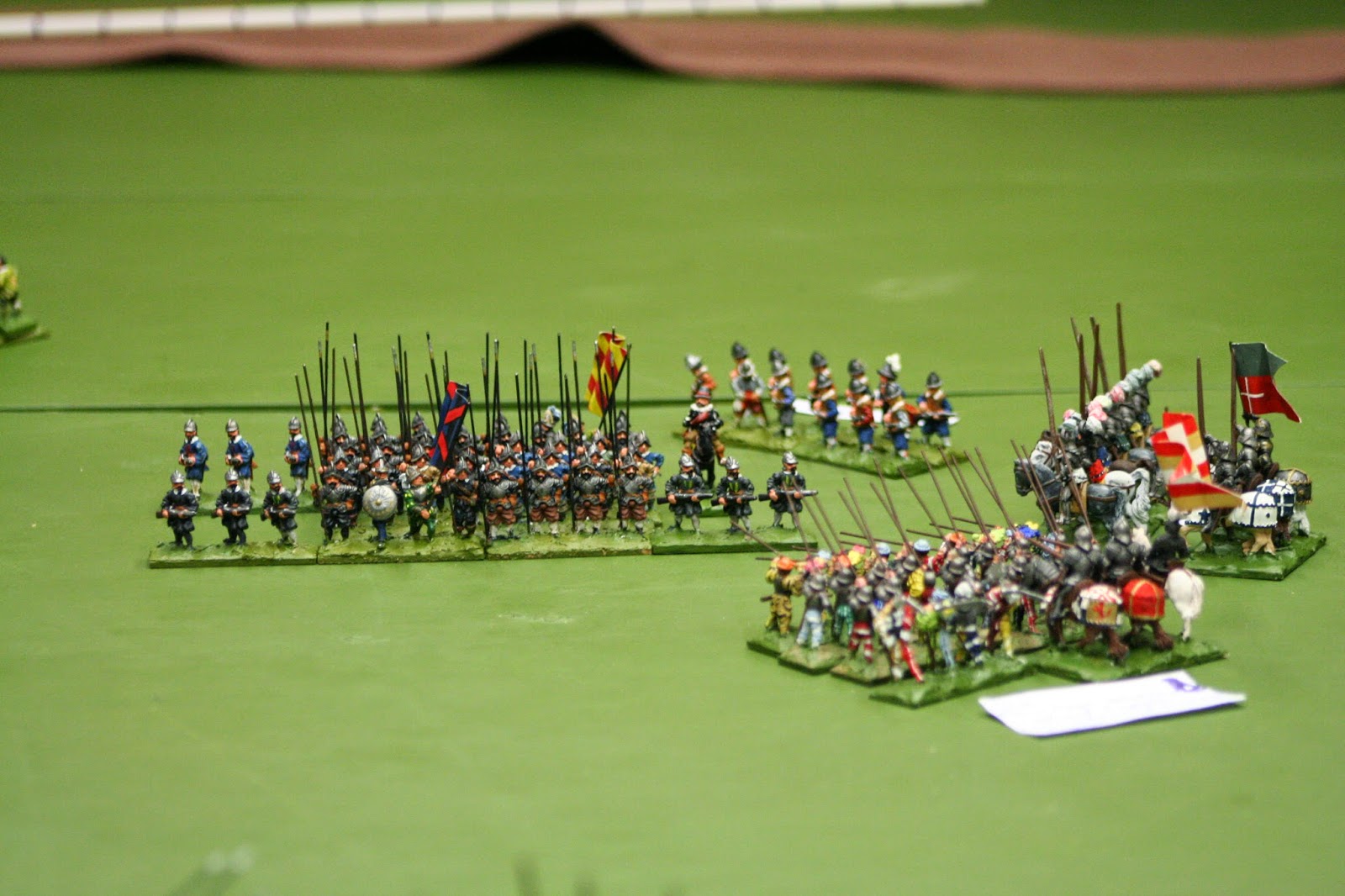 The Tercio was Richard's last hope. He turned it, in good order, into the centre but all was lost, pretty much. They were able to retire in good order. Win to the French.

A win to the historical victors, with some elements of the original battle occurring. As noted above I didn't get all of the unit categorisation correct.  I think Des Therme's men should have been superior, as should have been the tercio. I wasn't happy, completely, with the formations I set up and there should have been more firearms for the Imperialists. The special rules worked well, however.

FoG-R continues to entertain and baffle me in equal measures. I cannot hold all of the detail in my head in the way you need to in order to play the game well. I do not find it intuitive. However, the rule book is comprehensive and pretty well laid out. The index isn't bad at all, although occasionally odd. It is a better product than some other glossy, hard cover rule books, and uses its page count well. It often gives results that look and feel right, but, boy, does luck play a part at times. The wheels can drop off just simply by rolling a couple of threes

We will persist, I'm sure. May even buy a copy. My old lads are getting a good number of outings and enjoying themselves enormously. Although I hear that some of the landsknechts would like to play at being Swiss next time.