First game back from holiday, and for various reasons we're playing on a Thursday.

As CoW is looming the final play tests of "To Ur is Human" are becoming more important, or rather urgent. We haven't played a game for a while, and whilst I was away I was musing on late 19th century warfare and before that I was painting Assyrians. This meant there was a danger I would forget how they worked.

As it proved to be.

Now the rules are in close to final format - just some chrome to work on - I can start putting more terrain back on the table. This meant a game back in the fertile crescent, with irrigation ditches, palm groves, villages and fields.

Here we have a typical land dispute type game. On the right the aggressor city-state is giving those on the left a right see-ing to over some ownership claim on grazing land. To make their point they're going to burn some crops, groves & villages. A scratch force of locals and the provincial "Big Man" ("Lugal") are going to stop them, if they can.

Chris W was in control on the left, Phil on the right. 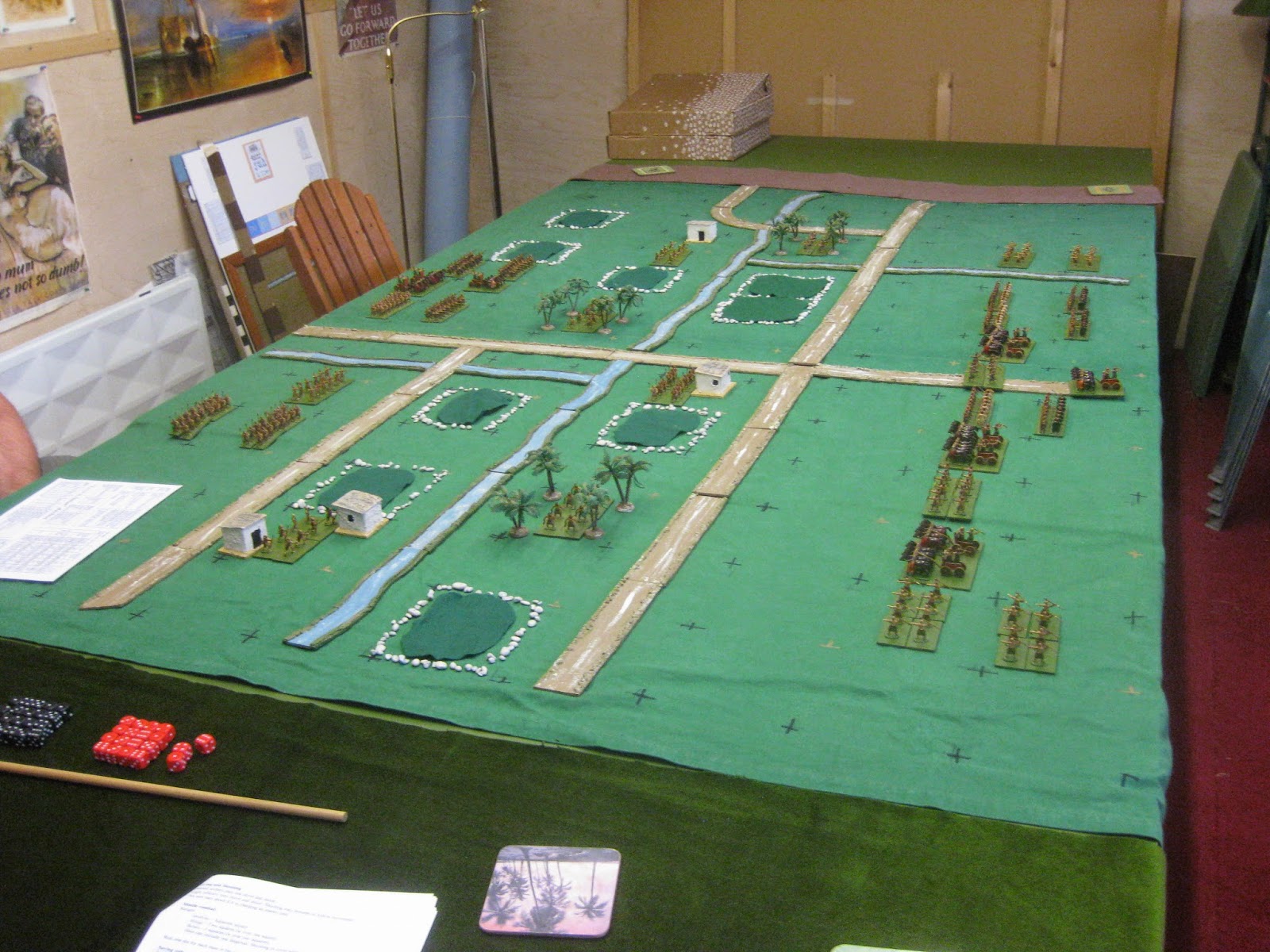 Phil's army started with a general advance. Negotiating the battle carts across the irrigation ditches at the crossing points meant that careful thinking was required to get them lined up properly. Elsewhere light infantry worked the flanks. 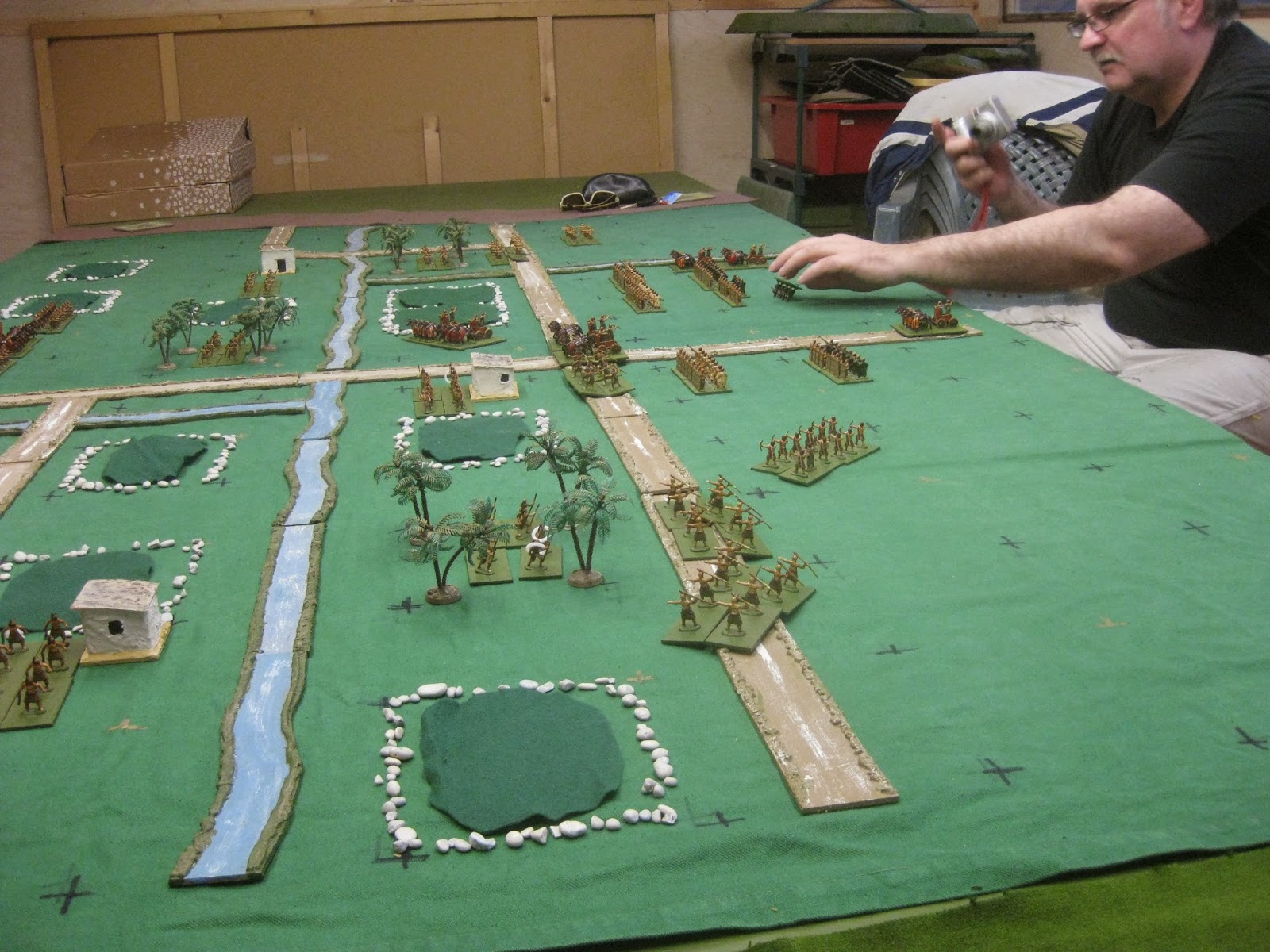 Chris was having none of this, - after some dithering, when he considered just retiring from contested areas - and started to develop local counter attacks, whilst holding onto his threatened objectives. 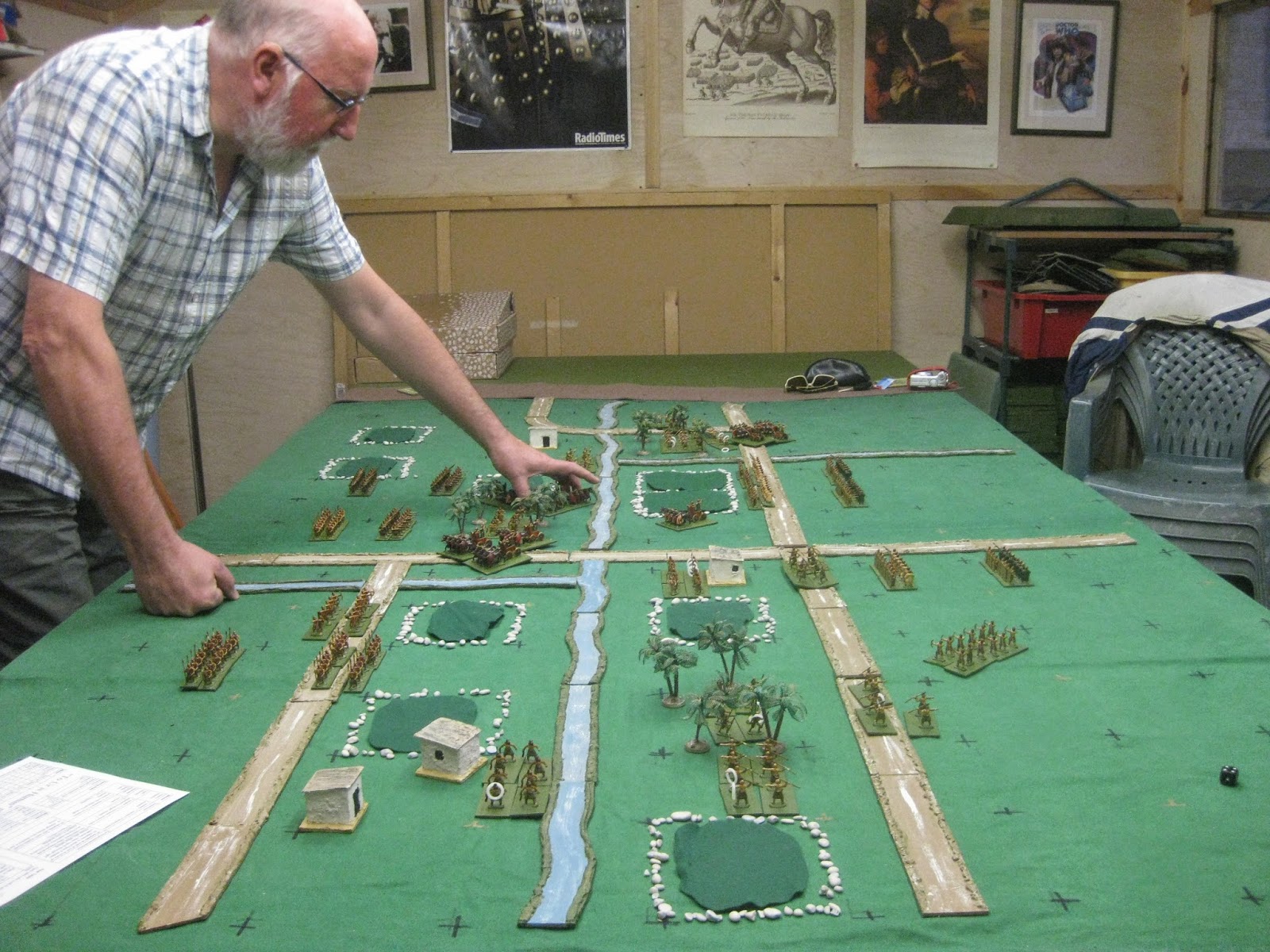 A nasty scrap developed around Chris' left flank palm grove, as Phil tried to get local superiority over the defenders. Chris rushed up more light troops to support his defenders.This combat would eventually provide a good test of the Fear mechanisms in multiple unit combats. 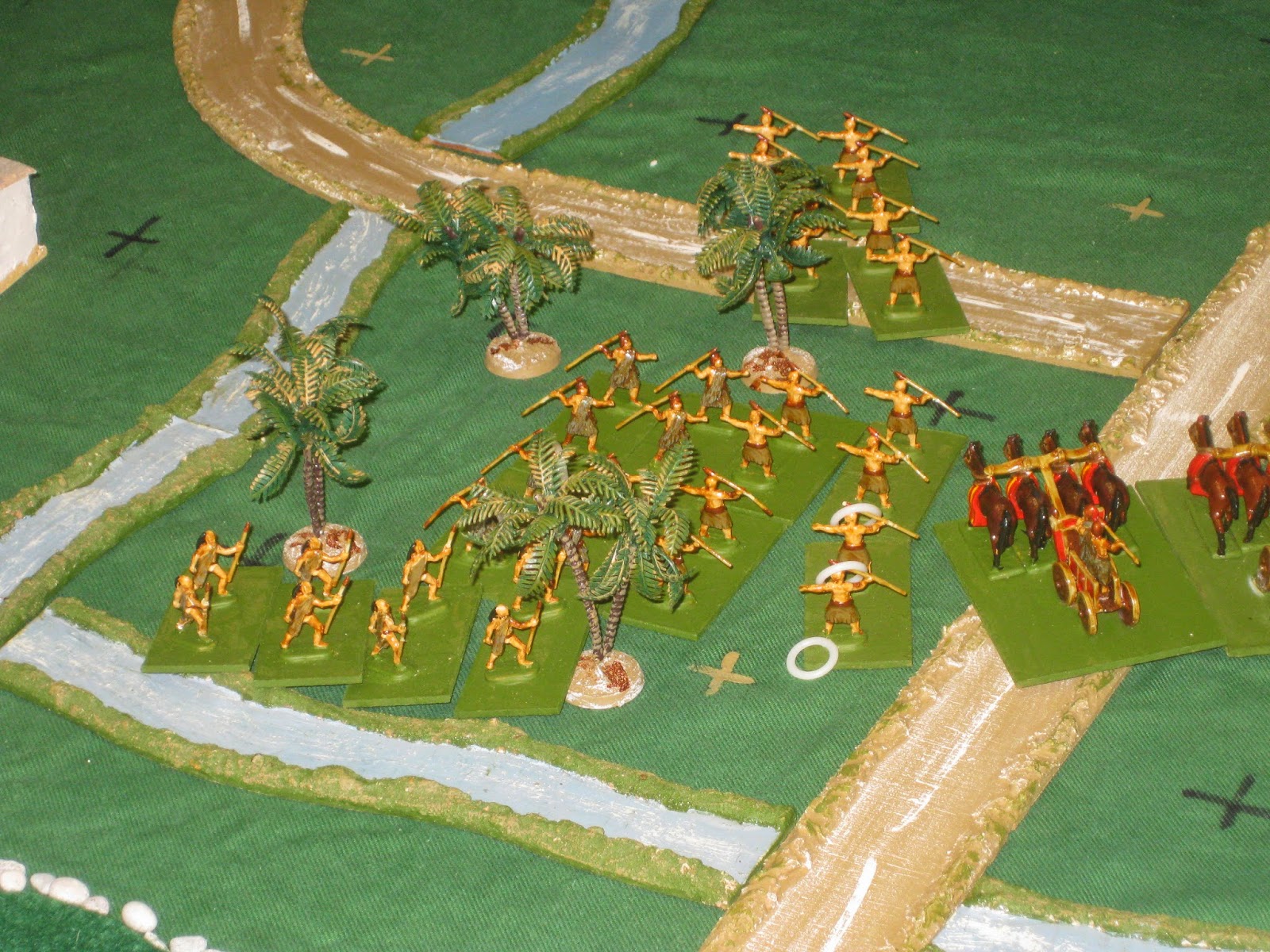 On his right wing Chris had succeeded in repulsing some of Phil's light troops, but the pursuit was drawing him away from his defensive line. In the middle Phil has pushed a unit of battle carts lead by his Lugal across the canal, and declared a charge on some of Chris' massed archers. 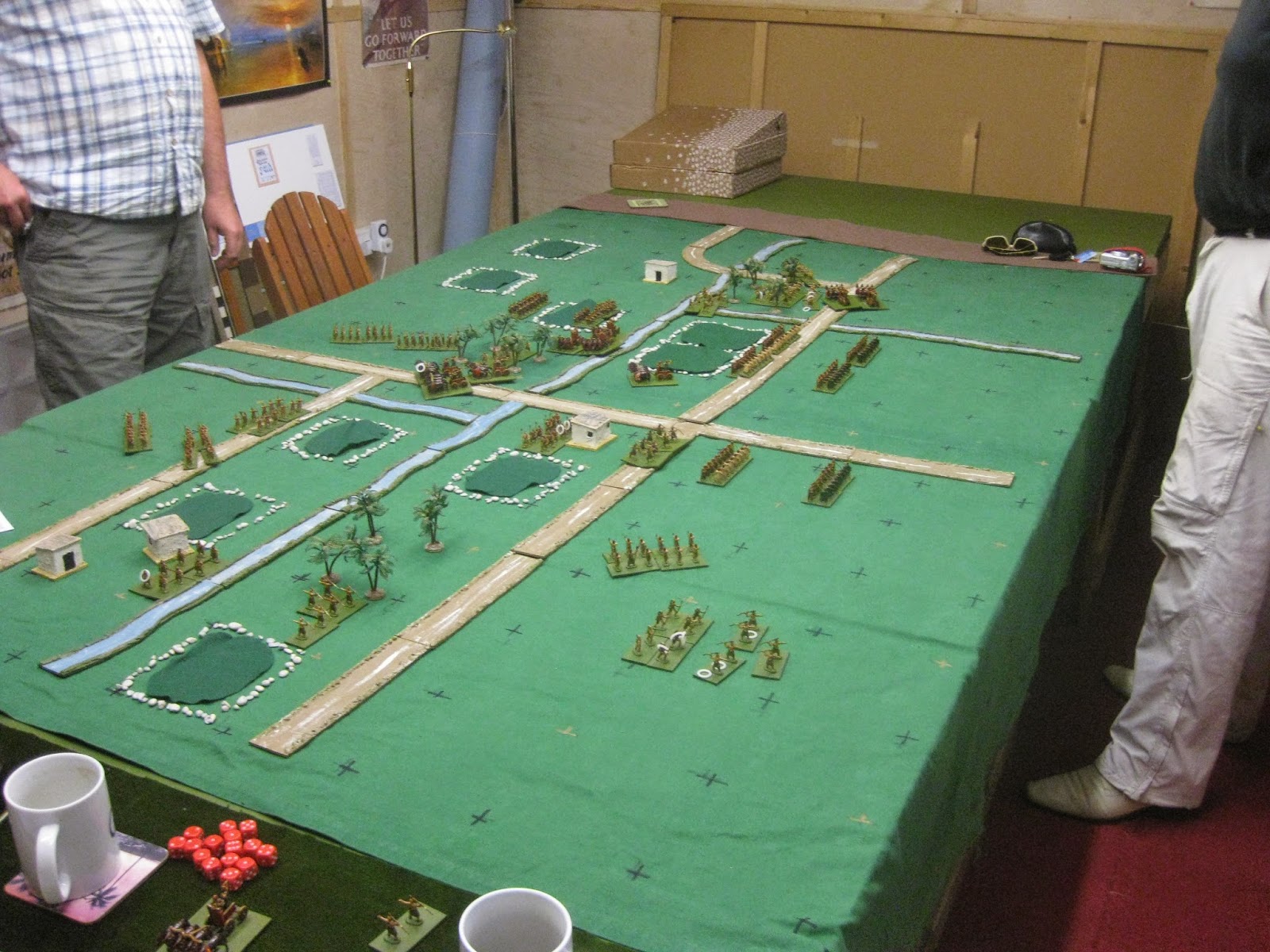 The mere threat of the on-rushing carts was enough to convince the archers they had more important business elsewhere, leaving the carts a square short of two heavy infantry units. 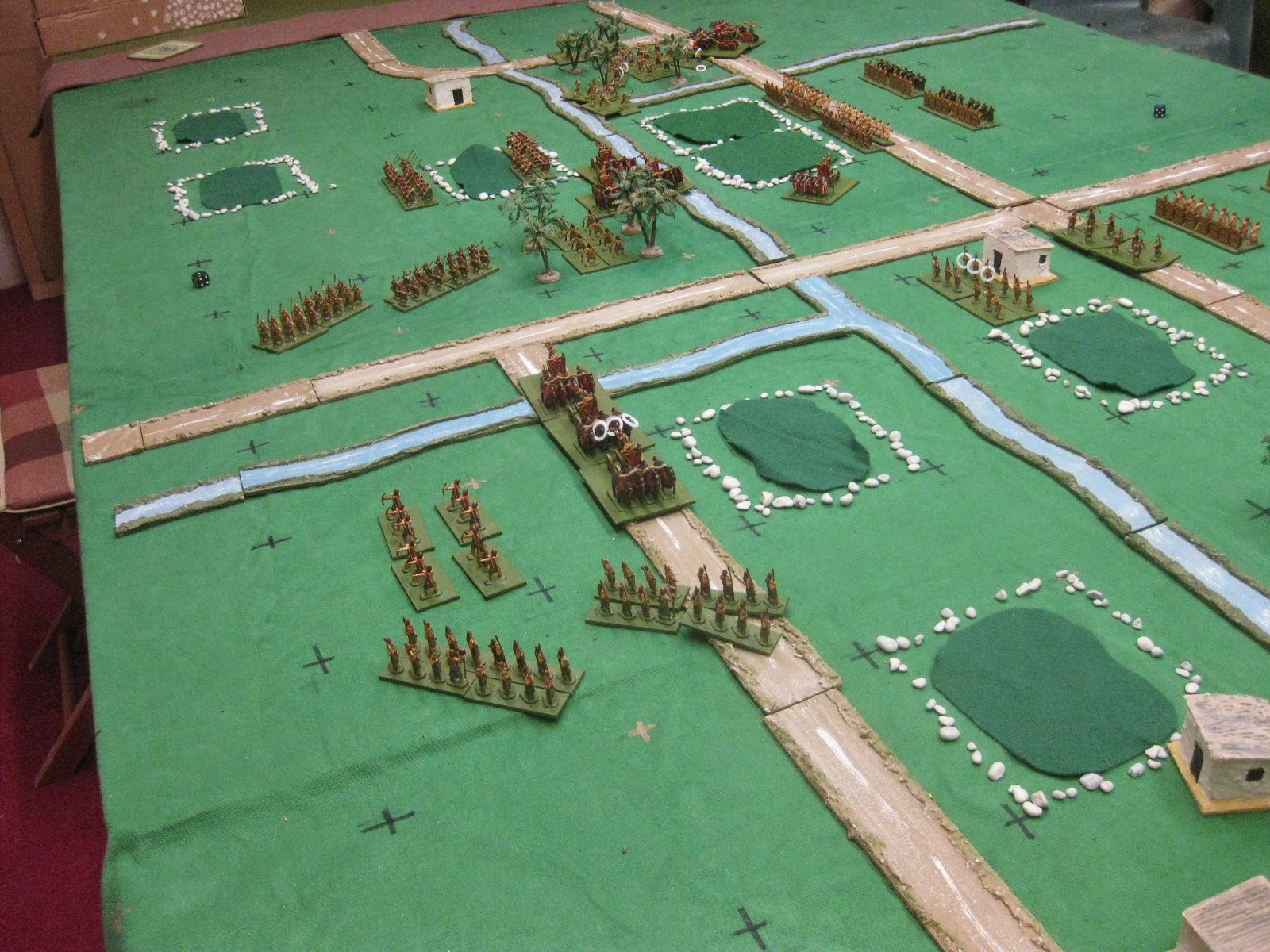 Ordered to counter charge the carts, the heavy infantry were not keen (ie failed the Fear Test) and dropped a fear level. Bad news. 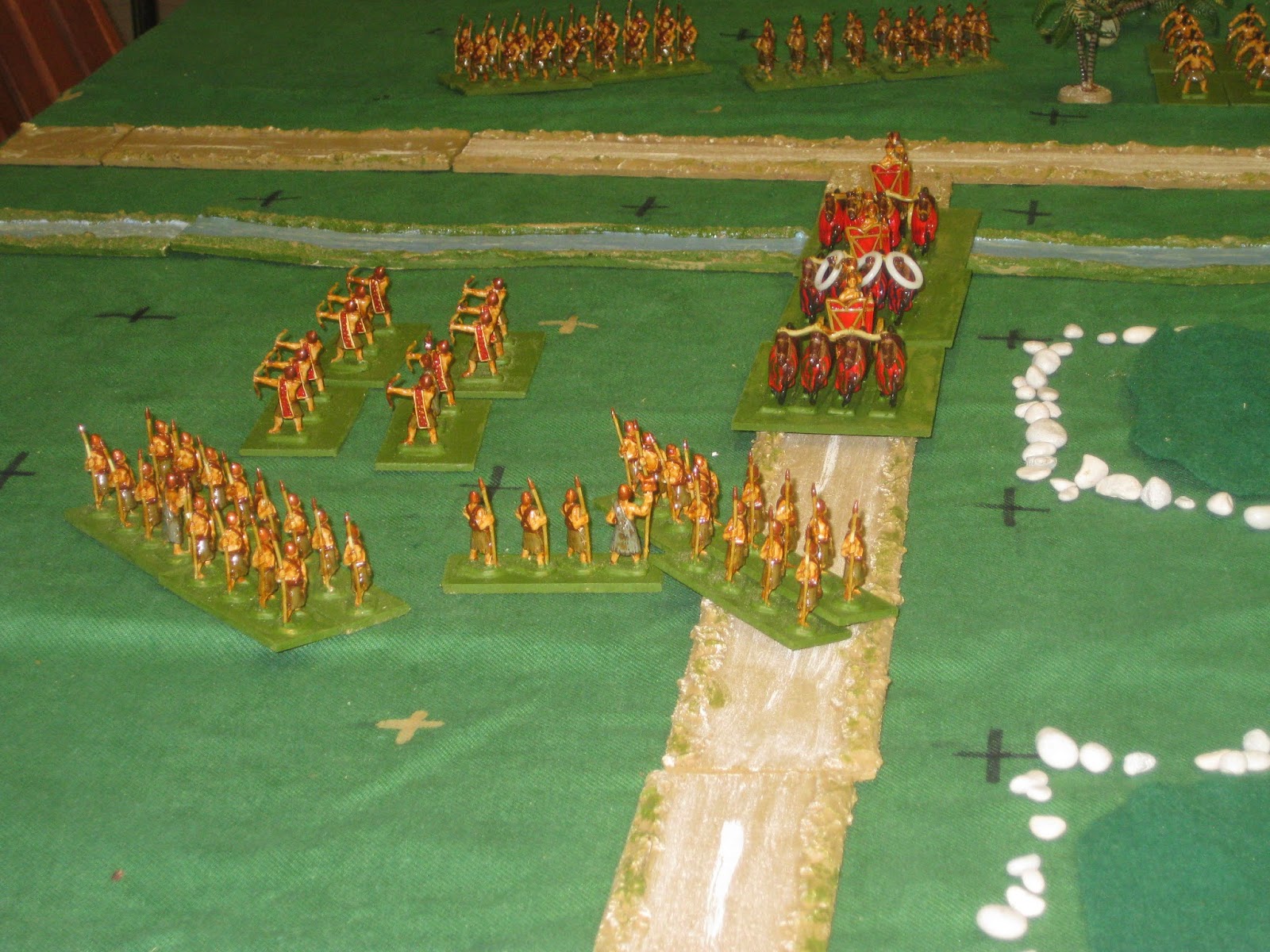 Elsewhere in the centre Chris' Lugal was endeavouring to stage a counter attack to disrupt the advance, using his personal battle cart unit. 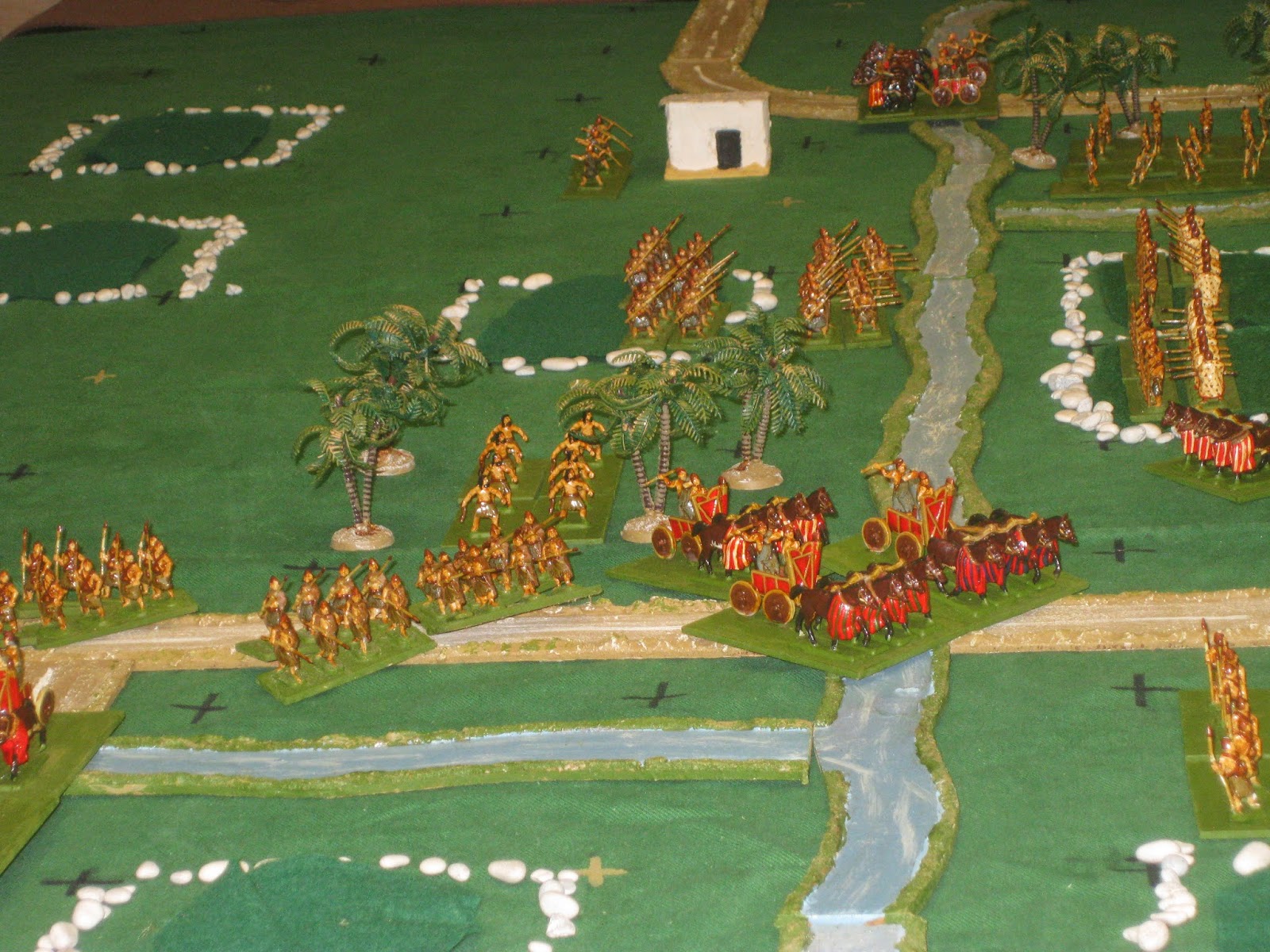 Not being one to pass up an opportunity Phil piled into the heavy infantry who had wavered in front of him, and they immediately broke. 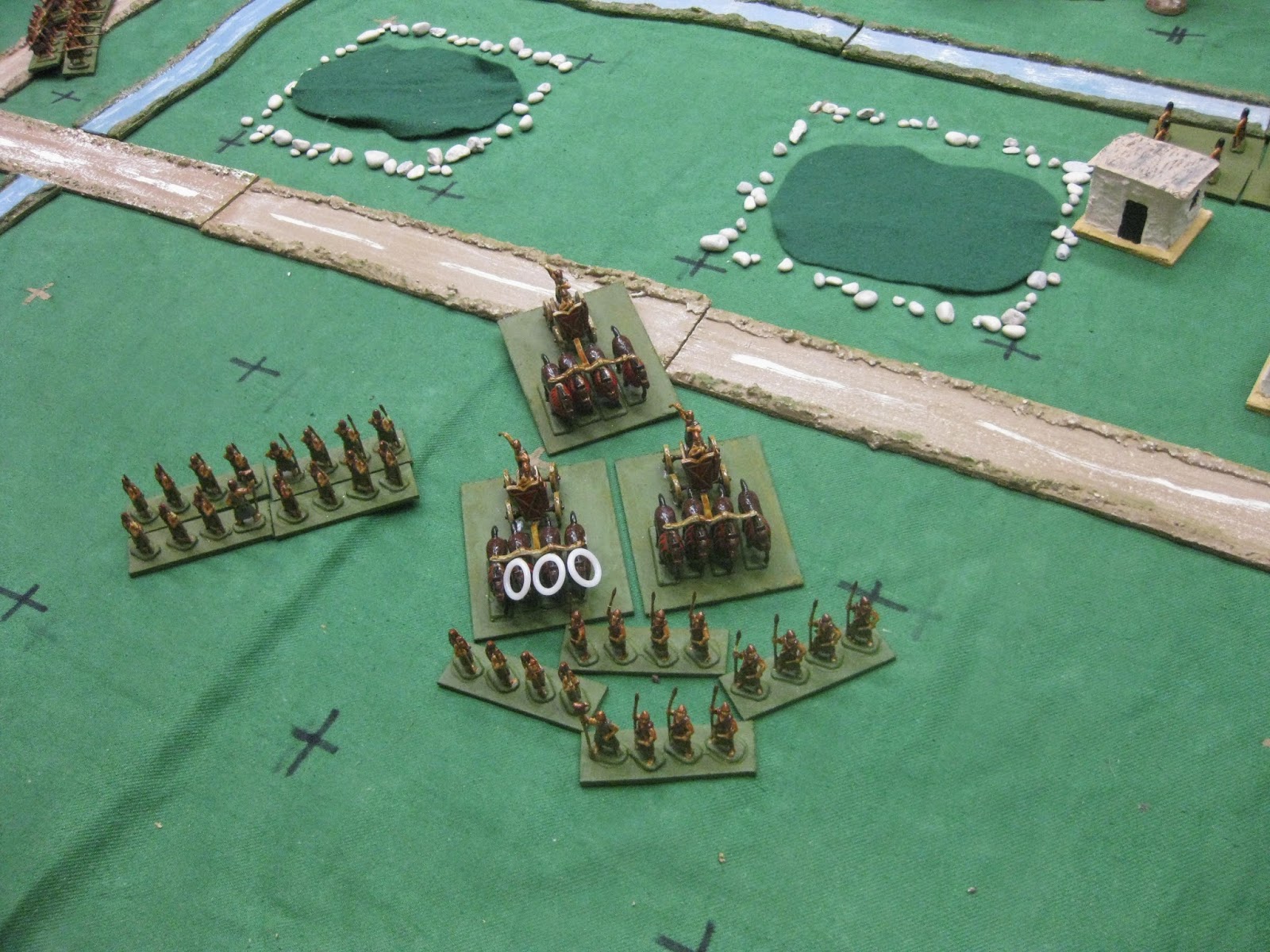 Chris' Battle carts stalled in the middle of the table, enabling a weakened unit of Phil's to charge them in the flank. They don't take kindly to this and drop a fear level. 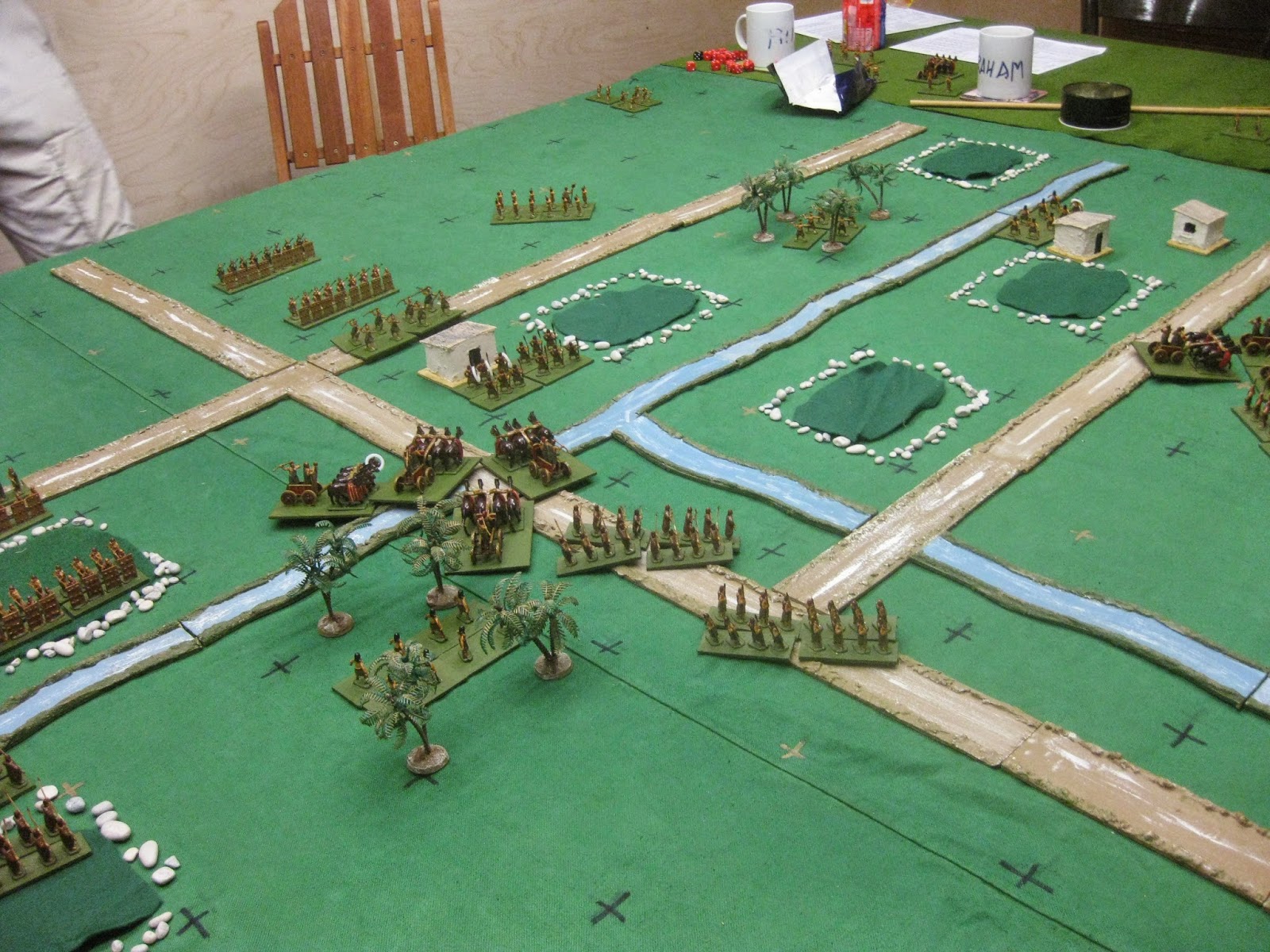 Phil has now been in possession of some squares long enough to set fire to them. 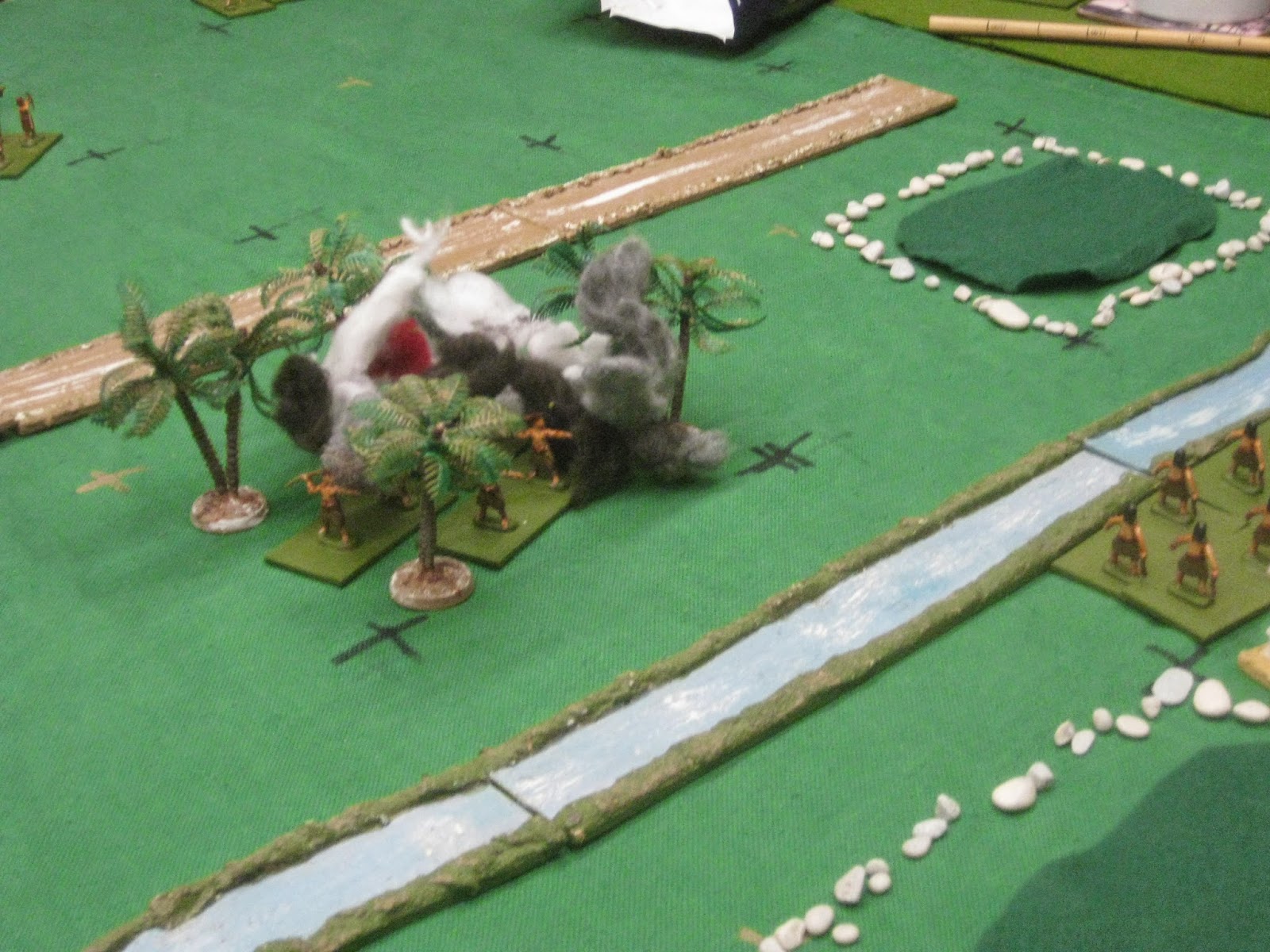 Despite being slightly worried by the flank charge, Chris's battle carts see off their opposite numbers, and charge into a supporting unit of Phil's heavy infantry. Note to self: Make it clear to players that fields with stones marking their outlines do not provide a barrier to battle carts. 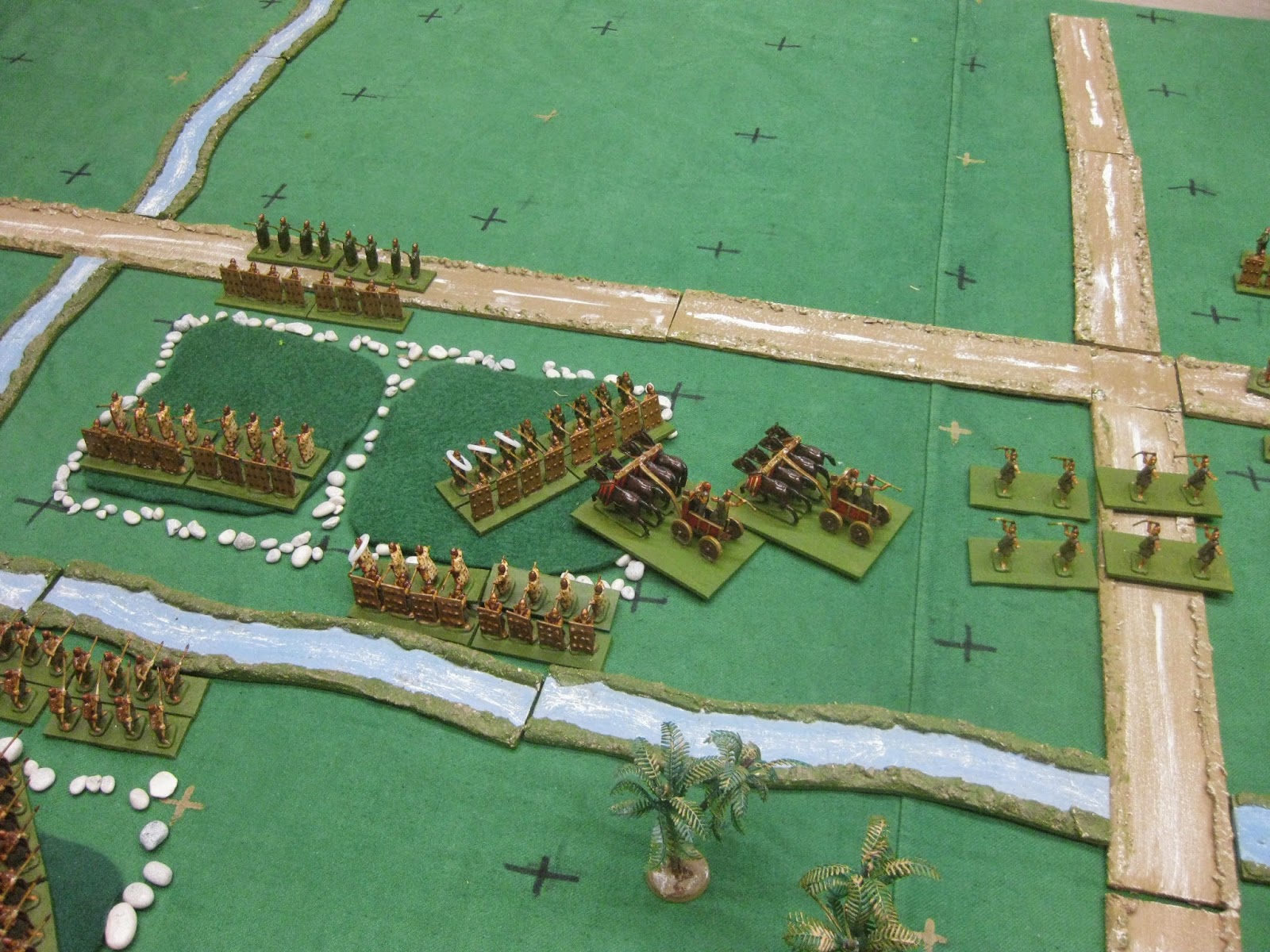 The charge does damage and bounces the infantry out of the field but doesn't break them. Phil is starting fires everywhere he can now. He has also got some infantry across the irrigation ditches and is roughing up my infantry (Chris has gone home by this point, so I'm overseeing the demise of his army). 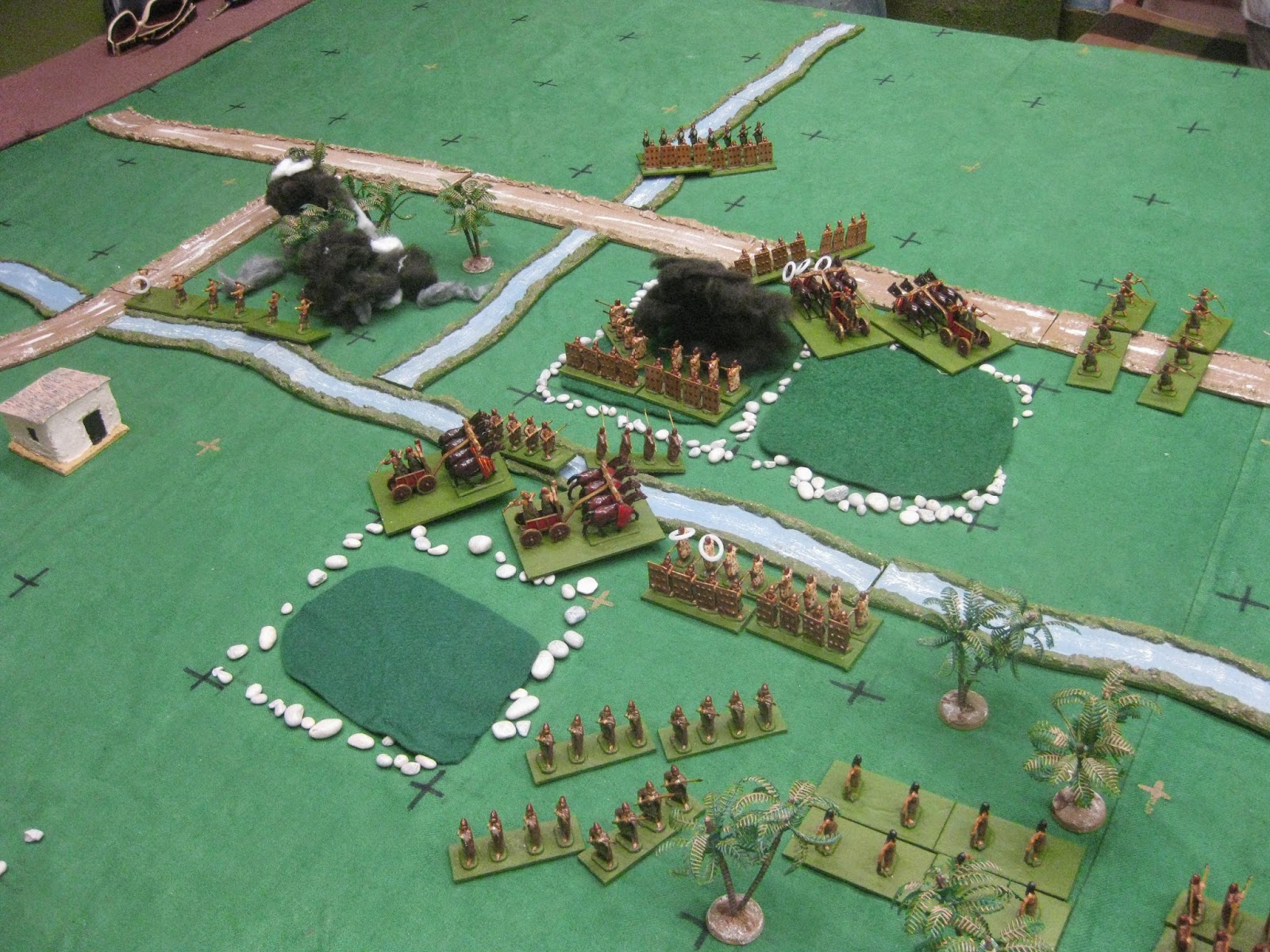 And that's about it. Most of the defenders are broken, dead or in fright. Fires are springing up everywhere. It isn't looking good for them.

Overall, once I'd got my head round what I'd previously written, the game played well. The main issues of dispute with the players have been marked out in the past and represent a difference of opinion on how things should happen. I'm getting the results I want however. A few changes are still required, especially in the pursuit area, I need to put some better troop definitions in the final set of the rules, but I'm good for CoW.

Email ThisBlogThis!Share to TwitterShare to FacebookShare to Pinterest
Labels: CoW, Sumerians, To Ur is Human