Back now from our trip to Peru, so normal service will be resumed shortly.

In the meantime I thought I'd share with you my thoughts on one of my holiday reads. 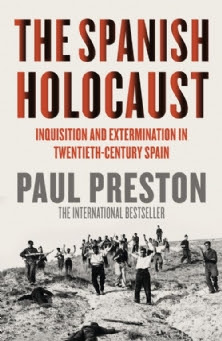 Sometimes - I don't know if you are like this - I acquire a book because the price looks good but I have no immediate need or desire to read it. One such book is Paul Preston's "The Spanish Holocaust" which had been remaindered at an attractive £2.99. This is Preston's account of the non-combat related murders and physical retribution inflicted by both sides behind the lines during the Spanish Civil War and after. As such it isn't really a book that informs one's understanding of the military side of the war, but is my opinion an important book that should be read if you want to understand why the War was important, and is important still.

It is a book that divides opinion. The use of the word holocaust in the title has been objected to as the slaughter does not compare to that of the Jews under Hitler. It's certainly the case fewer were killed, but it is also the case that a lot of people were, at least enough to warrant a description that means destruction or slaughter on a mass scale.

The second criticism is that the book contains unsupported accusations. It may have. But it is also one of the heaviest footnoted books I've read in a long while. It is meticulous in the accounts of the killings, torturings and rapes it gives and the sources from which they are obtained. It is almost as if Preston anticipated that this criticism would be made, and prepared against it.

Finally it has been criticised as Preston is clearly a pinko liberal who is biased philosophically against the Nationalists and is repeatedly unfair to Franco. Well, Preston may have left wing views. He is certainly more sympathetic to the Communists that the Anarchists (in contrast to Beevor), and he's clearly not a fan of Fascists. Even so he covers the killings on both sides in equal depth as far as I can tell. It might be fair comment that the Republic would have been as vindictive in victory as the Nationalists, but I doubt it.

The book does occasionally veer into judgemental language that mars what is a valiant attempt to be impartial. It must have been a really hard book to write. There's very little in it to bolster your faith in human nature.

It's a really hard book to read as well. The continuing repetition of the murders and indignities inflicted from location to location is unremittingly grim. Page after page catalogues what happened. Often the words are the same, only the places and names are changed. In the end I resolved to finish the book regardless as an act of remembrance for those who suffered, in the same way that the list of names is read out at 9/11 remembrance services.

At the end of it I was left with a feeling of intense fury that Franco got away with it. He died in his sleep with apparently a clear conscience believing he was doing God's work as a Christian. It's enough to make me want to believe that there is a Hell and he is burning very slowly in it whilst being force fed castor oil.

In a uncomfortable way the part of me that has designed one or two "black" games thinks that there is a game in there. In any event, even if there isn't, at £2.99 anyone who wants to wargame the SCW has no reason not to buy this book and read it.
Posted by Trebian at 17:26