This weekend is CoW. Unusually the preparation for my session (I'm doing "To Ur....") is finished so no need for any testing this Wednesday. Consequently I needed to find something quickly to fill an evening. I've been churning out Assyrians & Medes at a reasonable volume over the last couple of weeks and a quick check revealed I had enough done for a 75 point game using Armati 2nd edition.

There are some newer army lists on the Warfloot website so I pulled those down and got the figures out.

I like Armati. It has a neatness and simplicity to the core system that appeals to me and it gives a quick game if you don't over think it.

This Wednesday I was joined by Will & Chris W. Wednesday night regular Phil couldn't make it, - he hasn't finished his CoW preparations so needed the evening to attend to his terrain.

The pictures for this game are a bit mixed, - the light was such that the flash didn't always flash, so the colours vary depending on the angle I took them. For this game Chris & I shared the Assyrians & Will took the Medes. My initial thought was that the game would favour the Medes as they had a preponderance of cavalry, in particular in the light area. 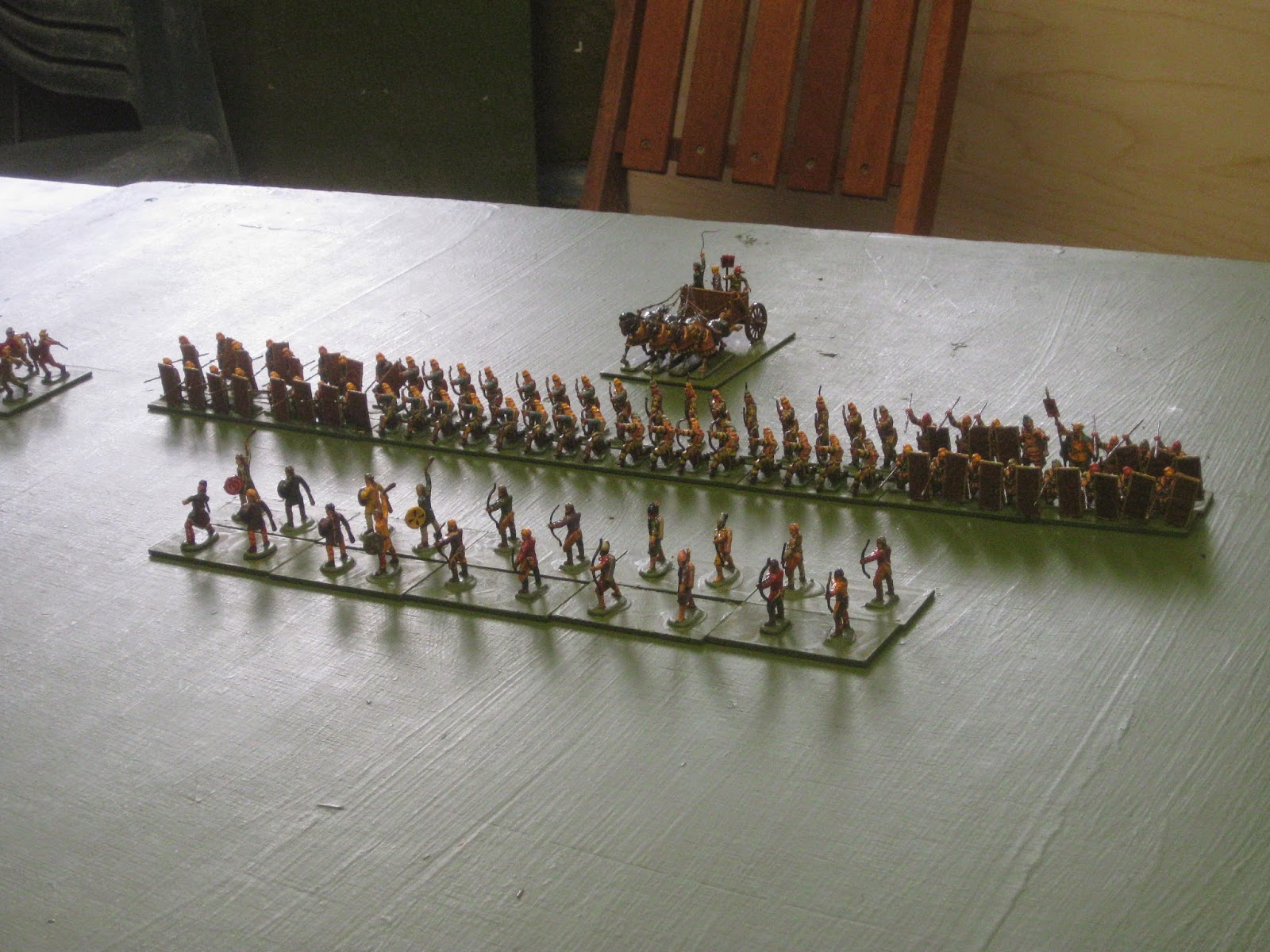 This is the Median heavy infantry line, with the skirmisher screen in front. This is one of the pictures where I couldn't get the camera to flash. 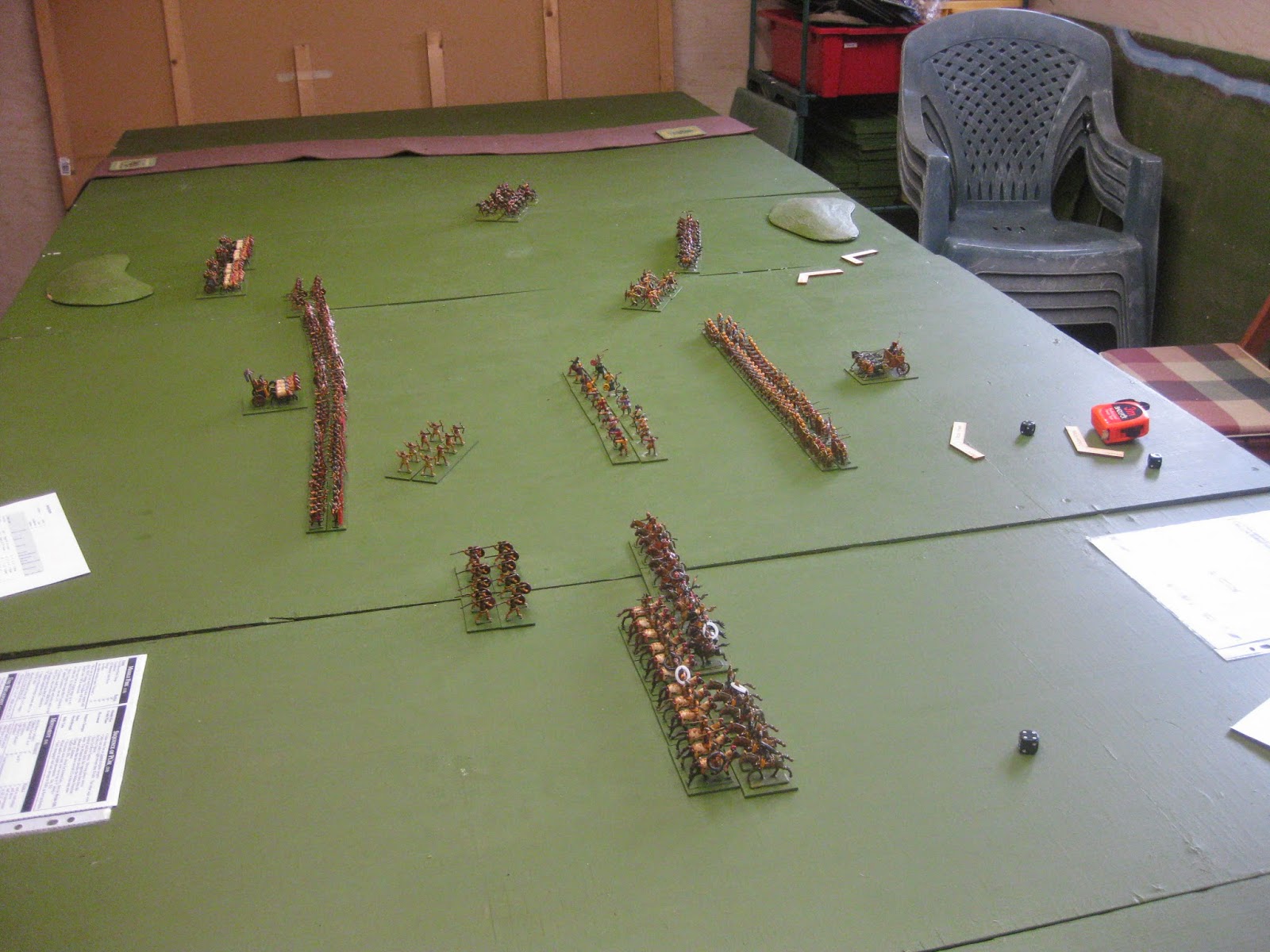 After turn one we already have a cavalry melee. This came as a surprise to all of us as we are used to playing Armati with 15mm figures where the movement distances are a bit shorter. I'm commanding this flank. I decided to commit to the action even though we were outnumbered 3 to 2 in terms of cavalry as I reckoned I could get my light infantry up to even out the fight. I also didn't want to fight the melee behind the flank of my infantry. In the distance Will is going wide with three units of Scythian light horse archers. 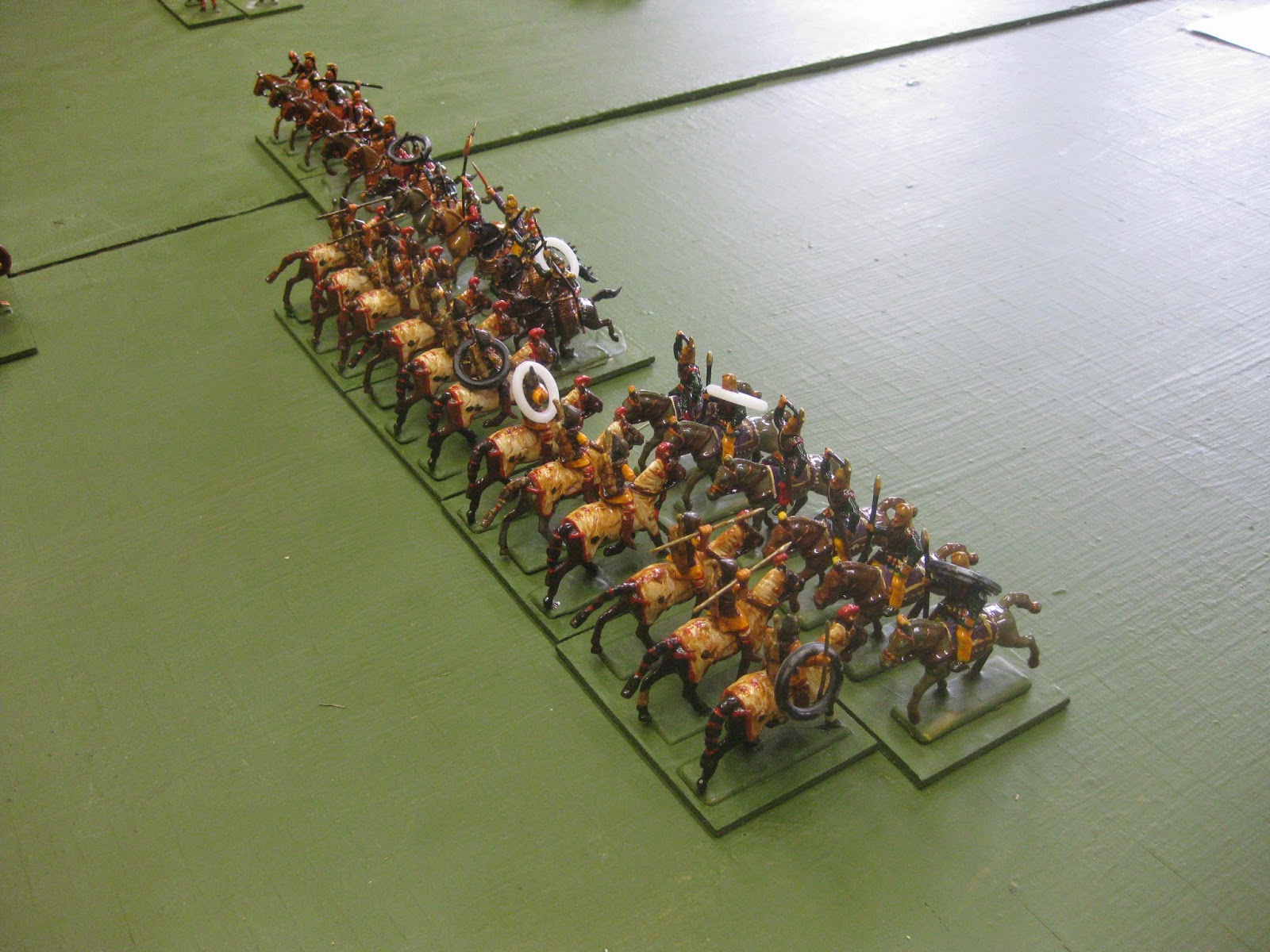 A close up of the cavalry melee.  I've inflicted more hits than I've taken, which is a start at least. 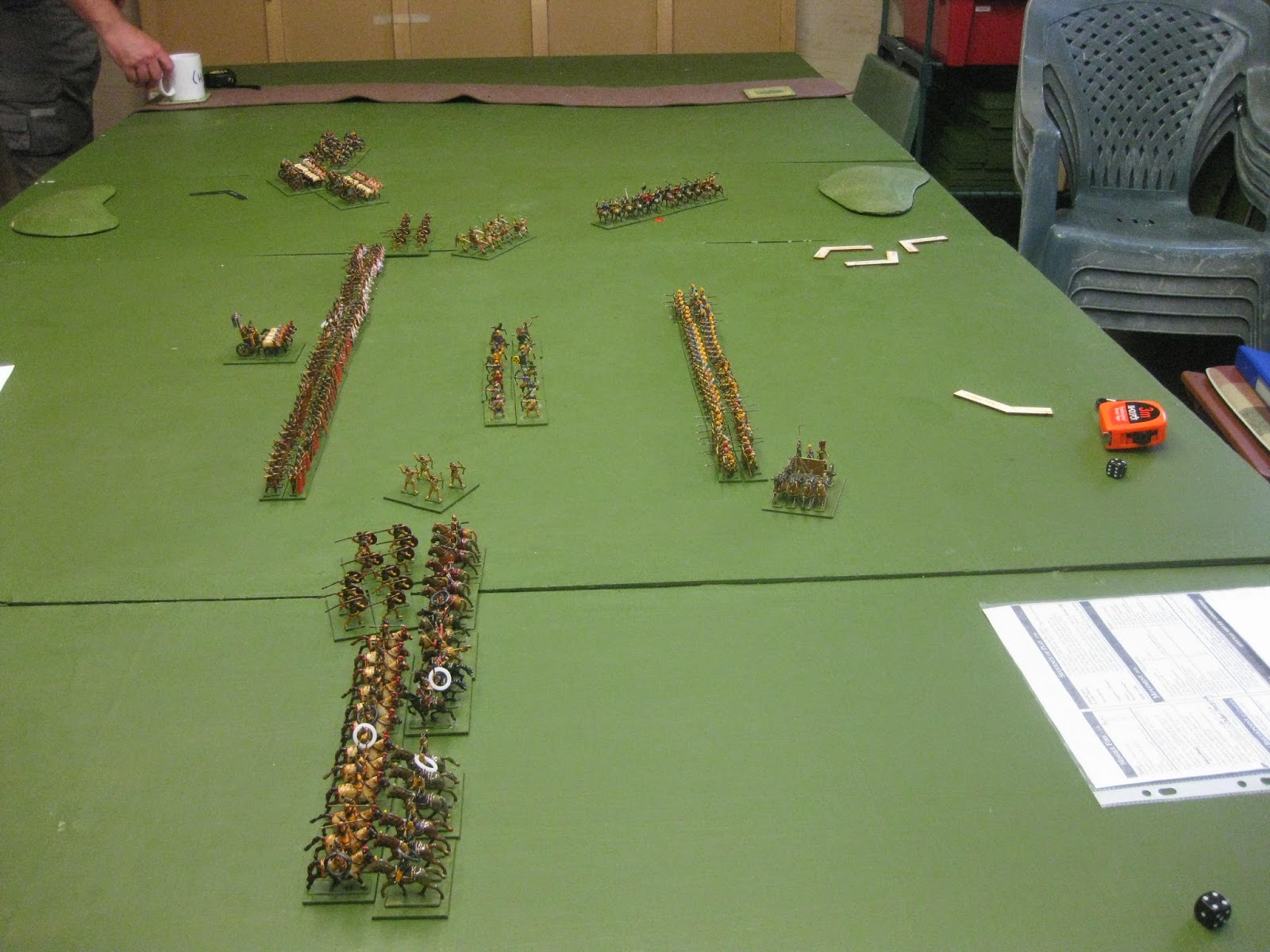 Will then made an error of judgement and brought his horse archers in charge range of the heavy chariots, which therefore manage to get into contact. Meanwhile the infantry lines close. Will is starting to regret putting his skirmishers in front of his main line bow units. 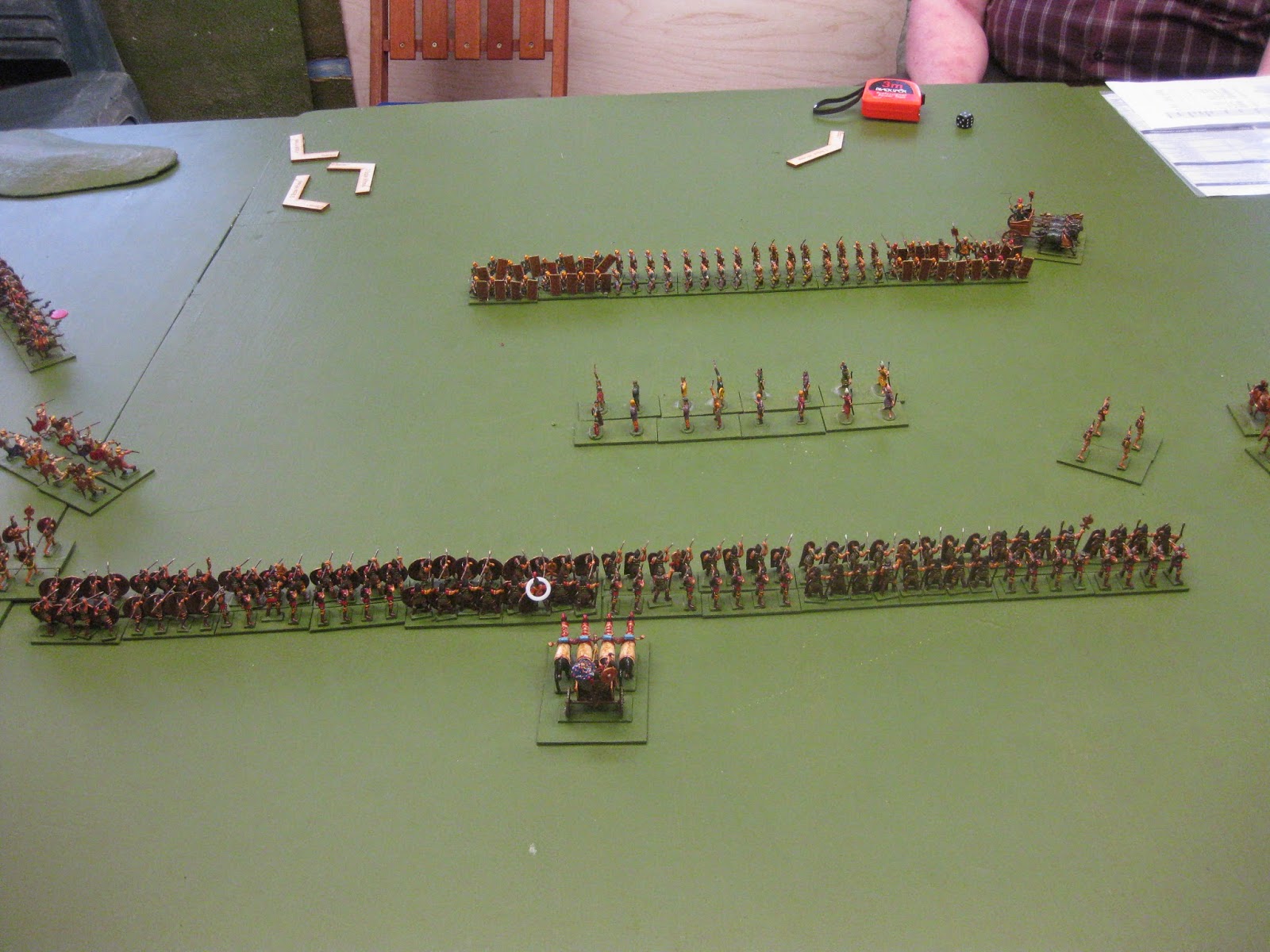 Frankly I think our heavy infantry line looks much scary than Will's. 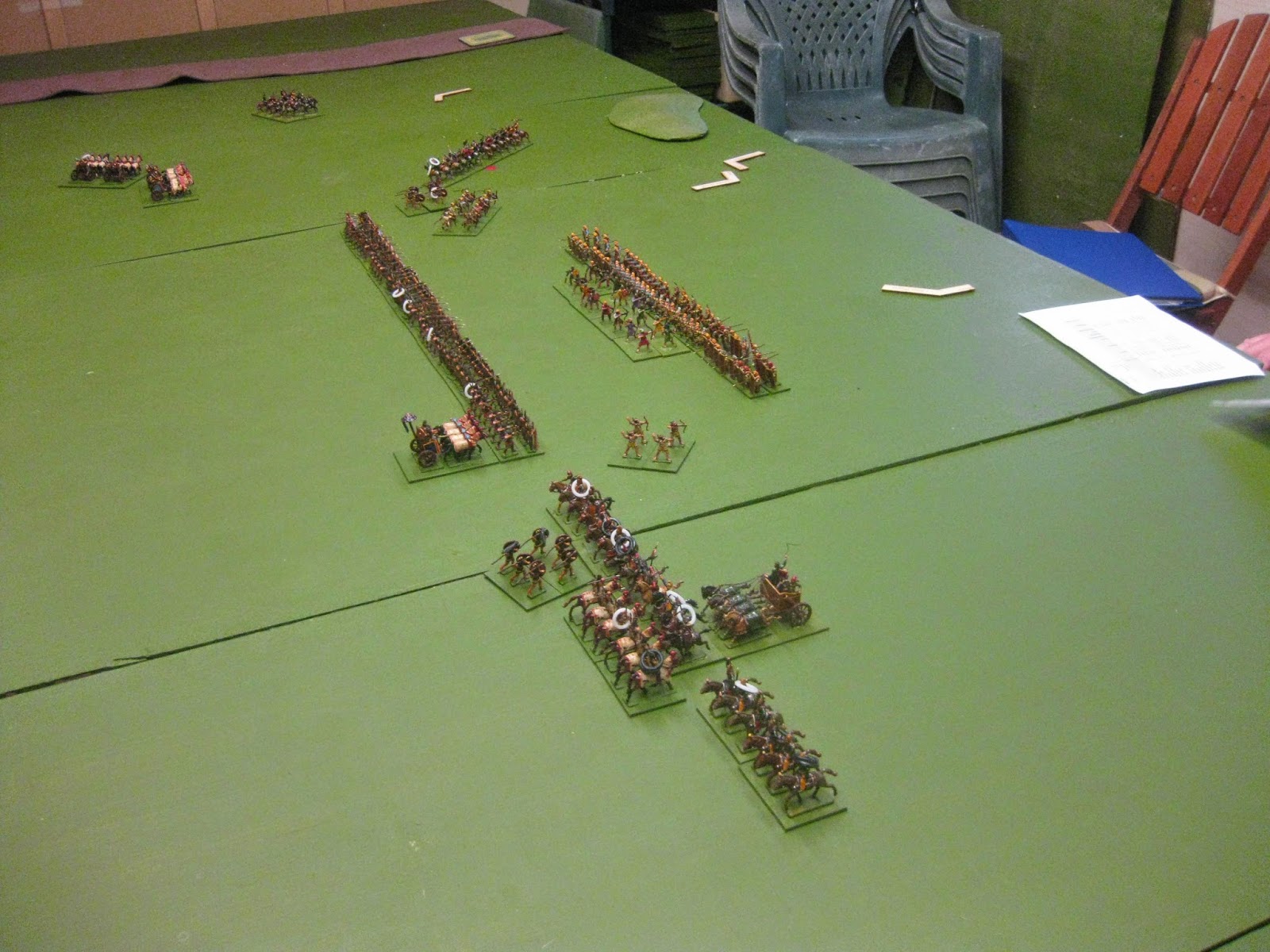 Having lost one of his horse archer units in the melee Will is now in the position of having to evade to stop losing all of them. He's likewise backing out his skirmisher screen as quickly as possible. This of course hands the initiative to us for movement and melee direction. 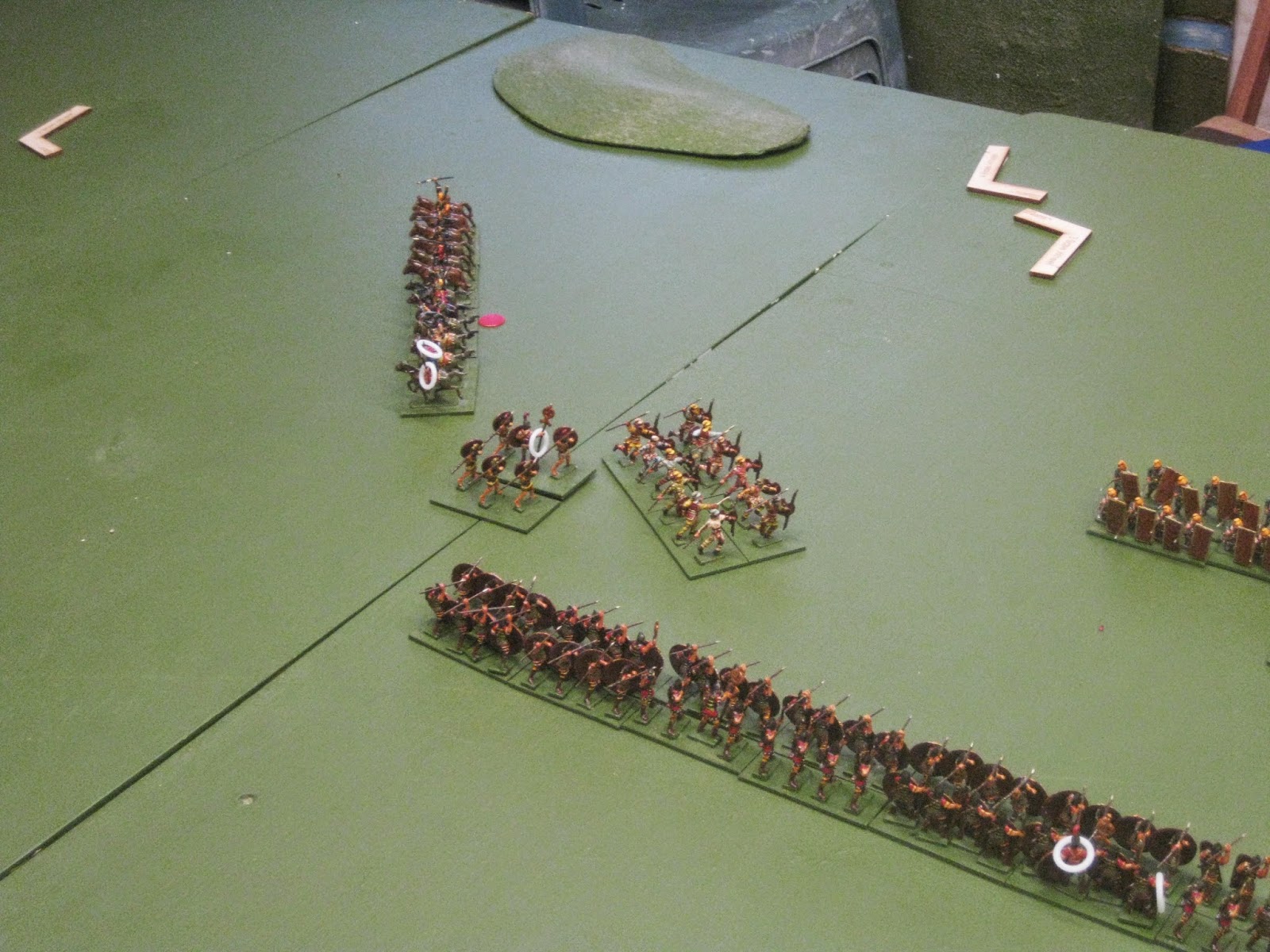 You can't see it in the photo two above but our light infantry charged into the Median heavy cavalry. We lose then in the melee eventually, but inflict a hit or two, which I was quite happy with. 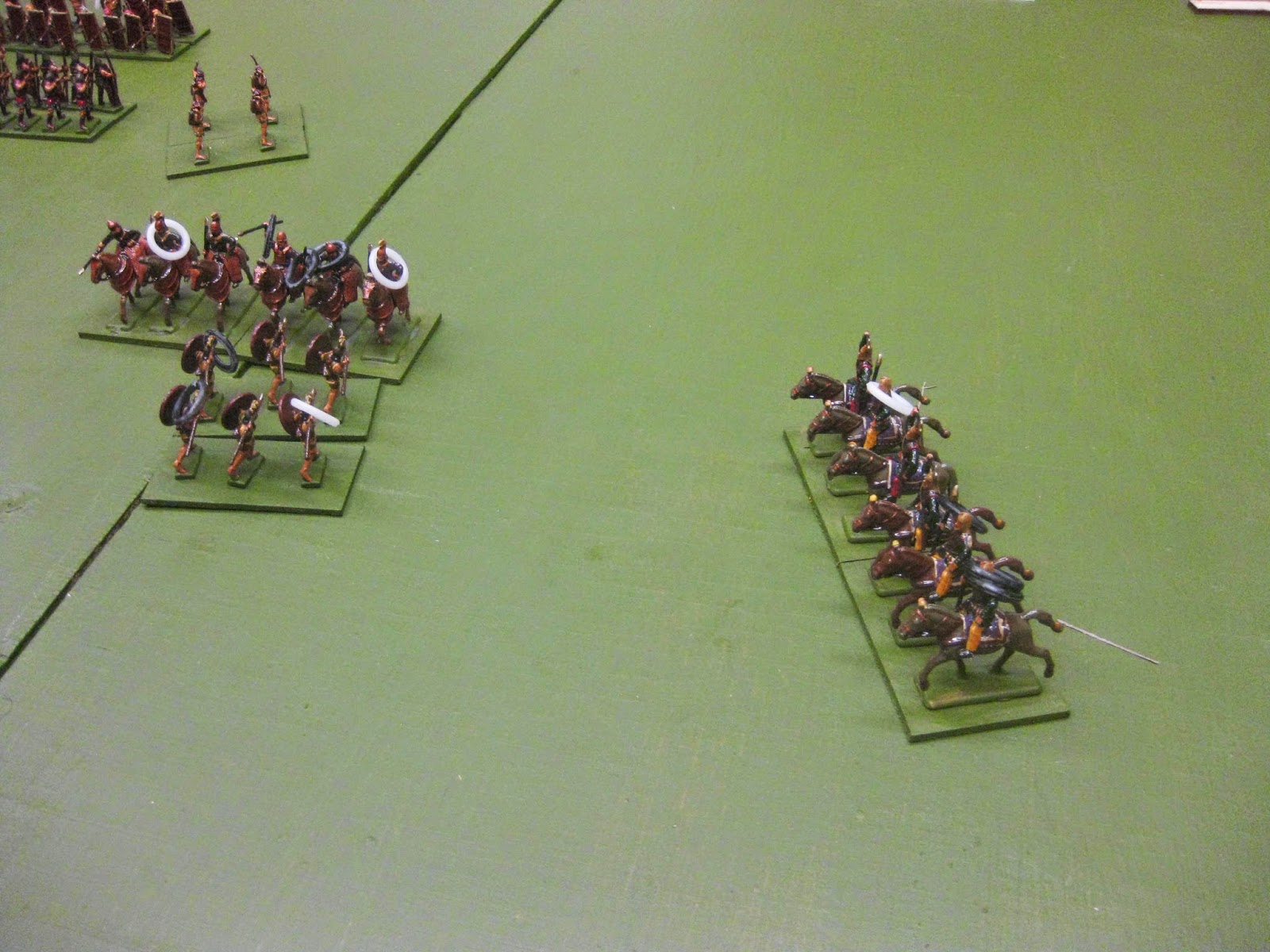 On my flank it's all looking a bit horrible. My lights have failed to break the heavy cavalry they're fighting and Will succeeds in killing both my cavalry units, partly because he was able to turn in his end unit. 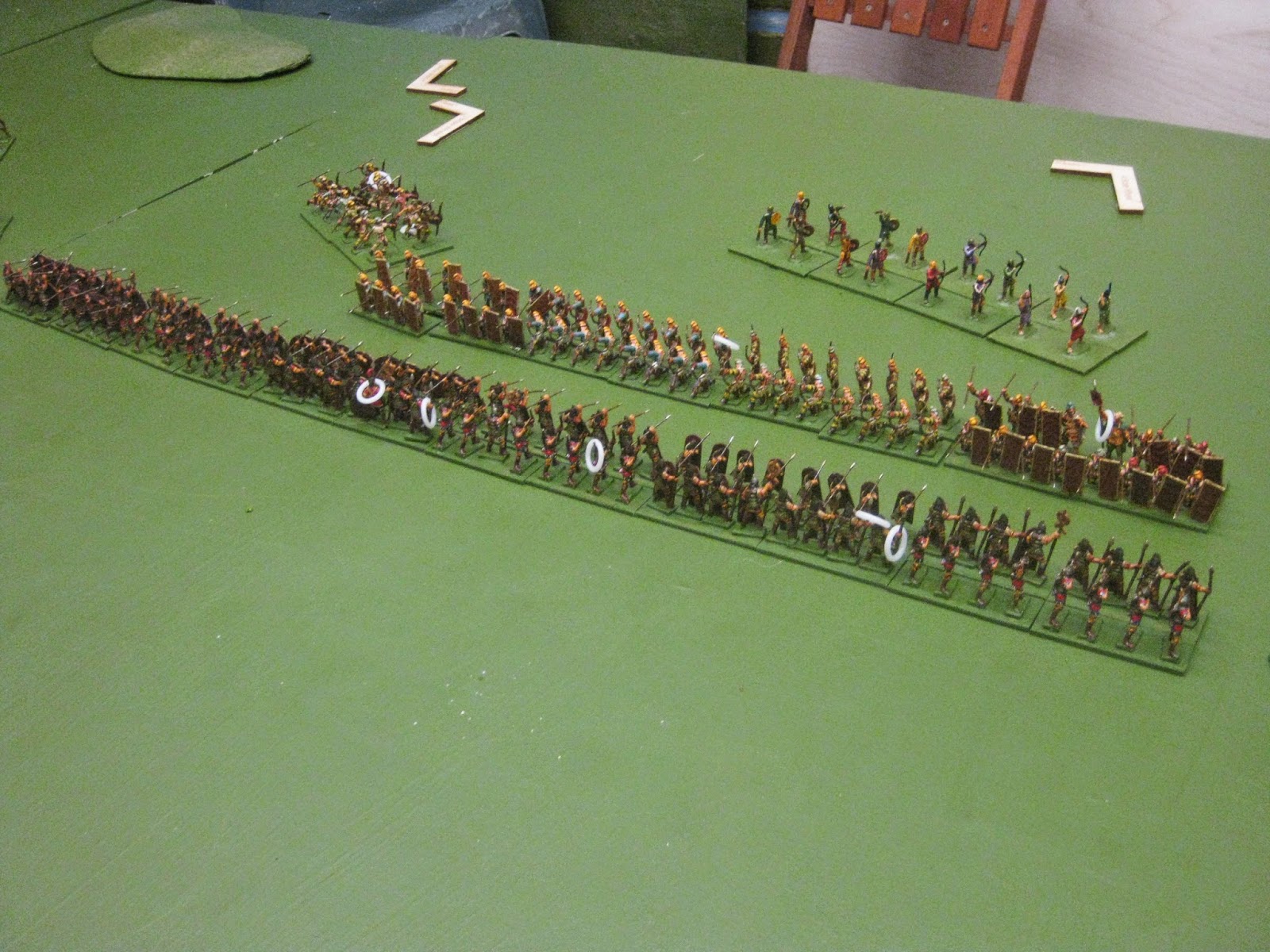 We've driven off the skirmishers  and are bearing down on the Median line. Overall we have the advantage in melee factors, but not by much. Plus we have taken more missile hits. 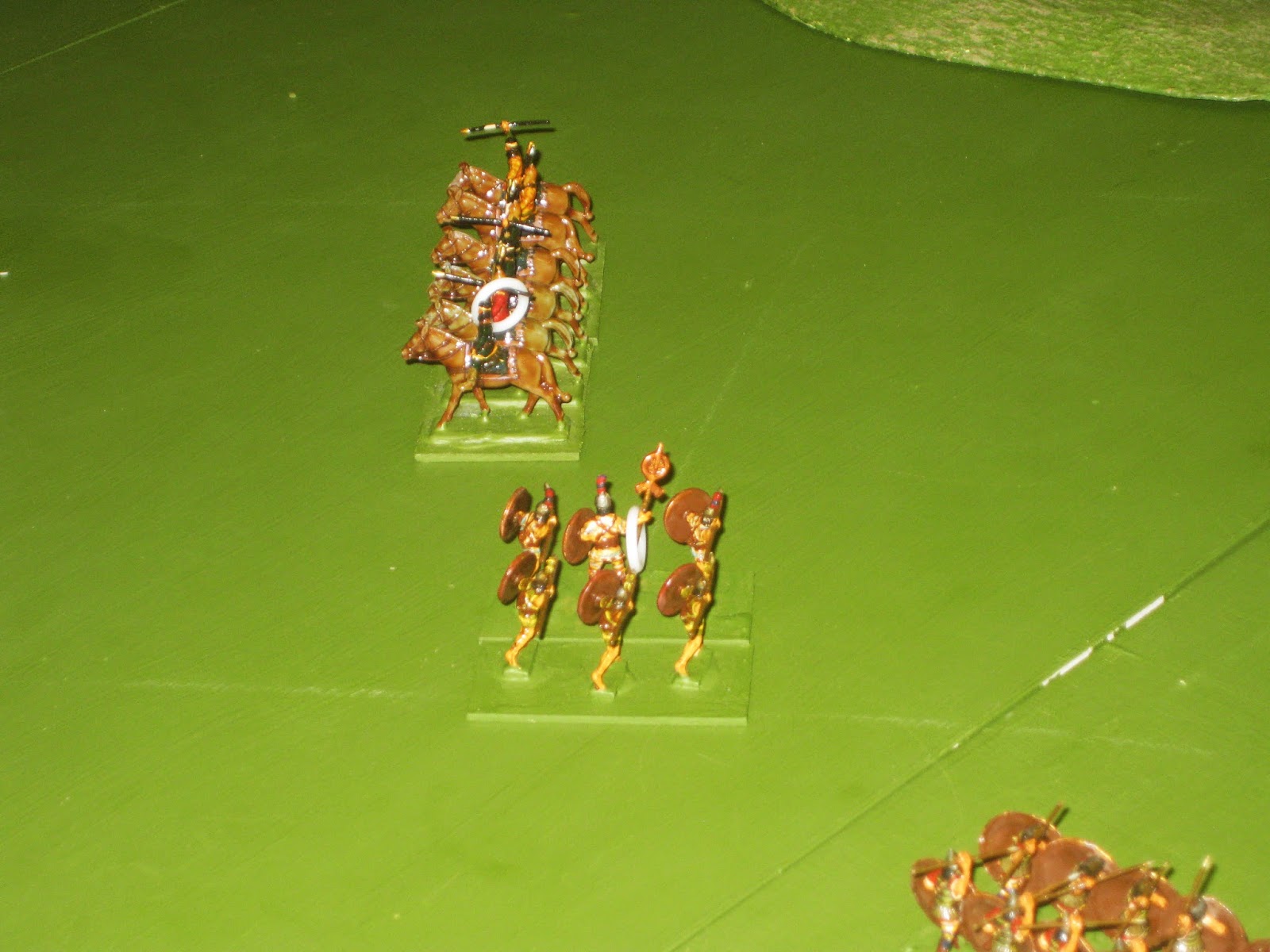 Good news on our left, however, as our remaining light infantry are able to charge into the rear of the cavalry and break them. This is the consequence of Will having to evade to avoid losing his horse archers. Here we're driving Will's cavalry out wide through a combination of the heavy chariots and light infantry. 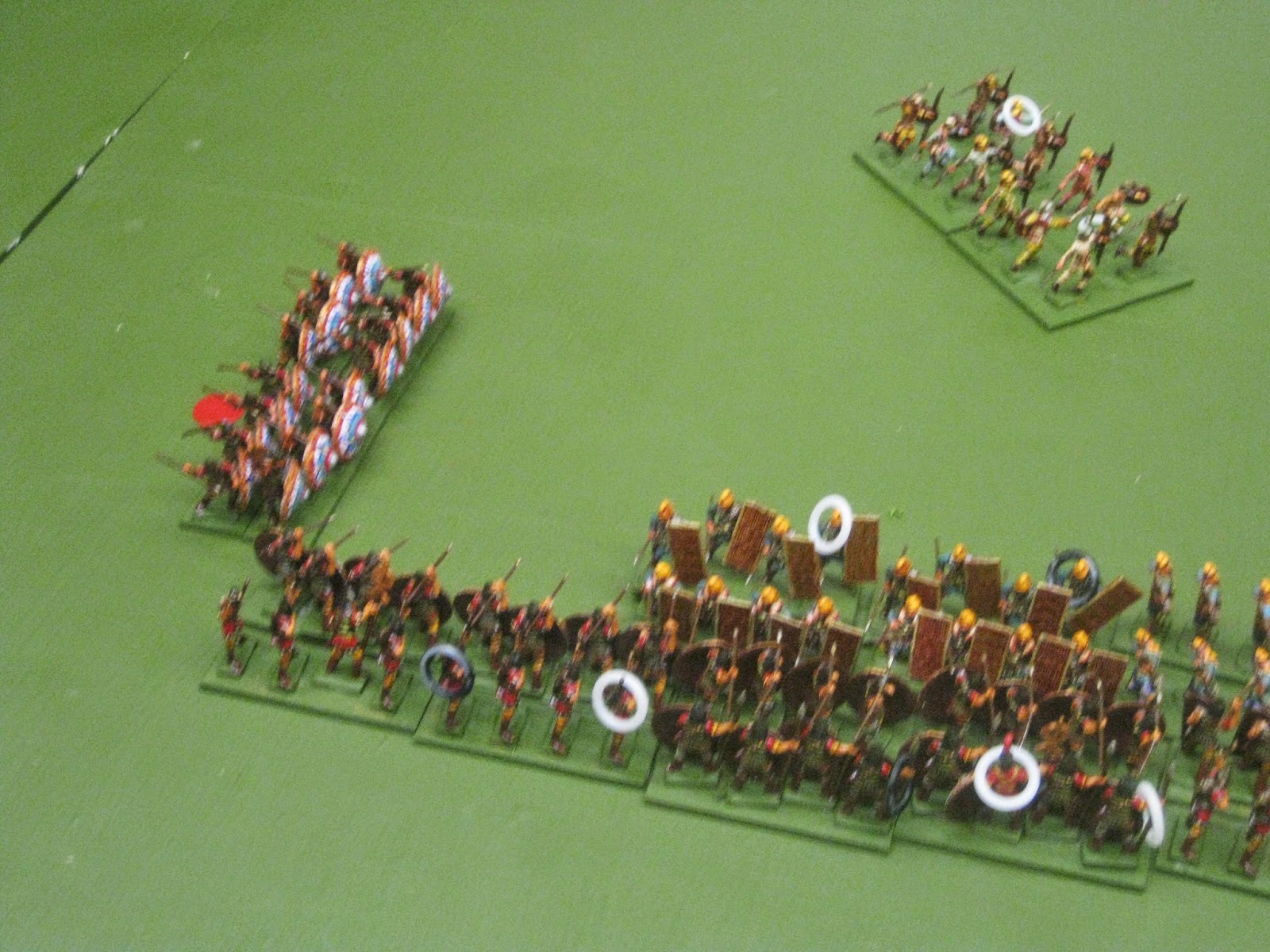 I forgot to take pictures for a while, but the melee on the right wing with two heavy cavalry units against one light infantry unit has gone really well. Through sheer luck I outscore both cavalry units for two turns and if the flanking cavalry were not veterans they would have broken. In the middle we're able to turn one of our heavy infantry units to threaten to roll up the Median line. 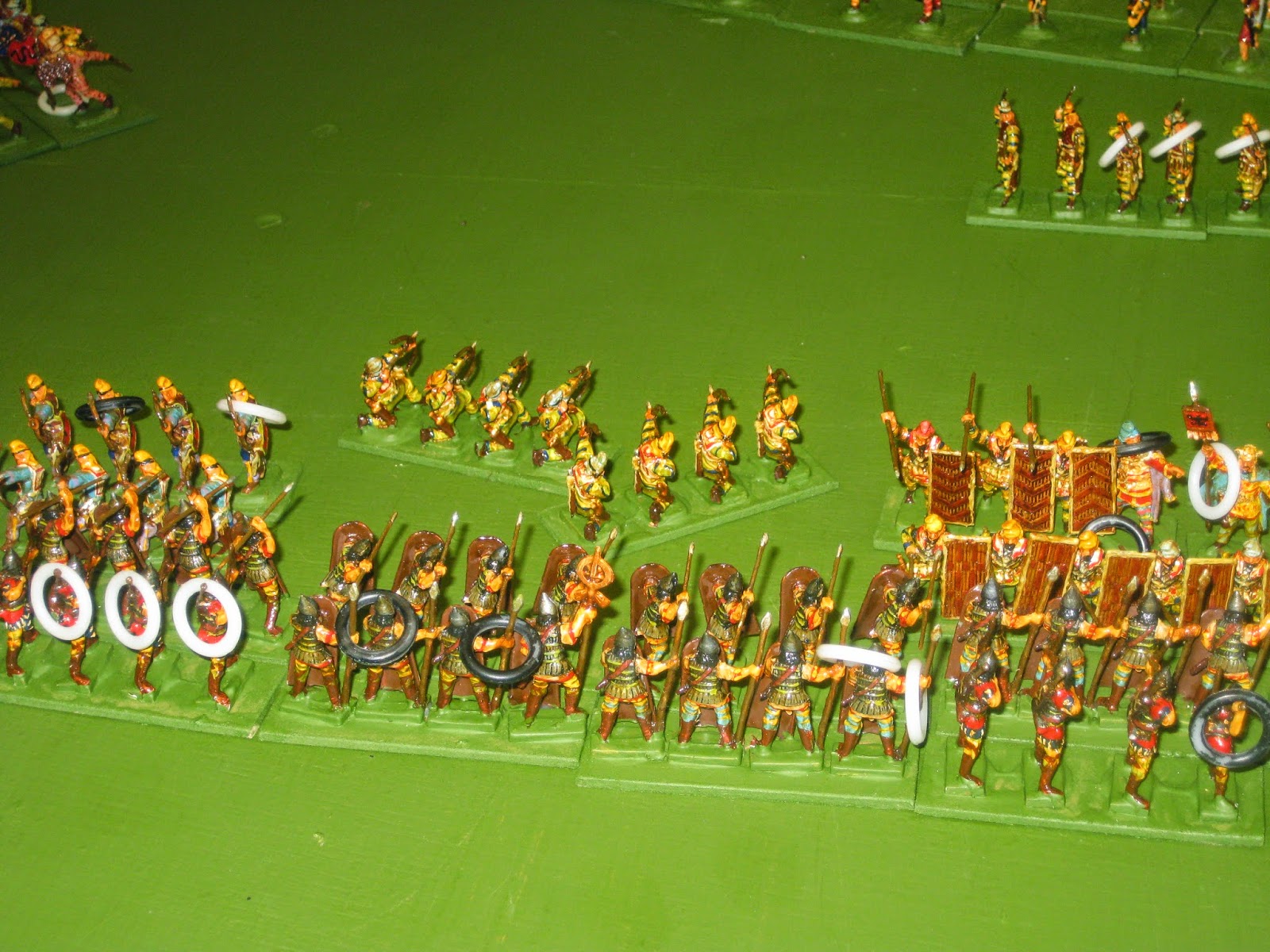 In the end the flanking unit aren't needed, as we break an archer unit in the middle of the line and reach the army break point. It's been a really close battle, but the Assyrians won out in the end.

A very satisfactory evening's entertainment. I'm afraid that we're not that sophisticated as players so we have to concentrate on troop based tactics, not rules based. That means we make mistakes (as Will did by coming to close to the chariots with his horse archers) but it also means that games are more plausible and the intricacies that can arise in Armati from the angles of movement are mostly overlooked.

Now, need to pack for the weekend.
Posted by Trebian at 12:01