Battle of Asculum, 279BC

Okay, here follows an account of the refight of Asculum that took place on Wimbledon Men's Final day in Shedquarters, Northampton.

The role of Pyrrhus was taken by Mr Phil Steele (reprising his role from the earlier refight of Heraclea). Chris Ager & I took the Romans, Chris being the Senior Consul. As I was umpiring as well I took serious guidance from the Senior Consul before committing myself to anything. Well, I could have just umpired, but there were lots of my toys on the table and I wanted to push them around.

Before we start I will point out for the more nerdy figure spotters amongst you that not all of the figures are exact matches for their historical predecessors. With a game on this scale with over a thousand figures deployed from my personal collection I had to use some proxies. You will therefore see some Carthaginians masquerading as Italians in the Epirot army, and some Gallic cavalry doing likewise in the Roman. In a game of this size I feel sure lots of people wouldn't notice if I didn't point it out. 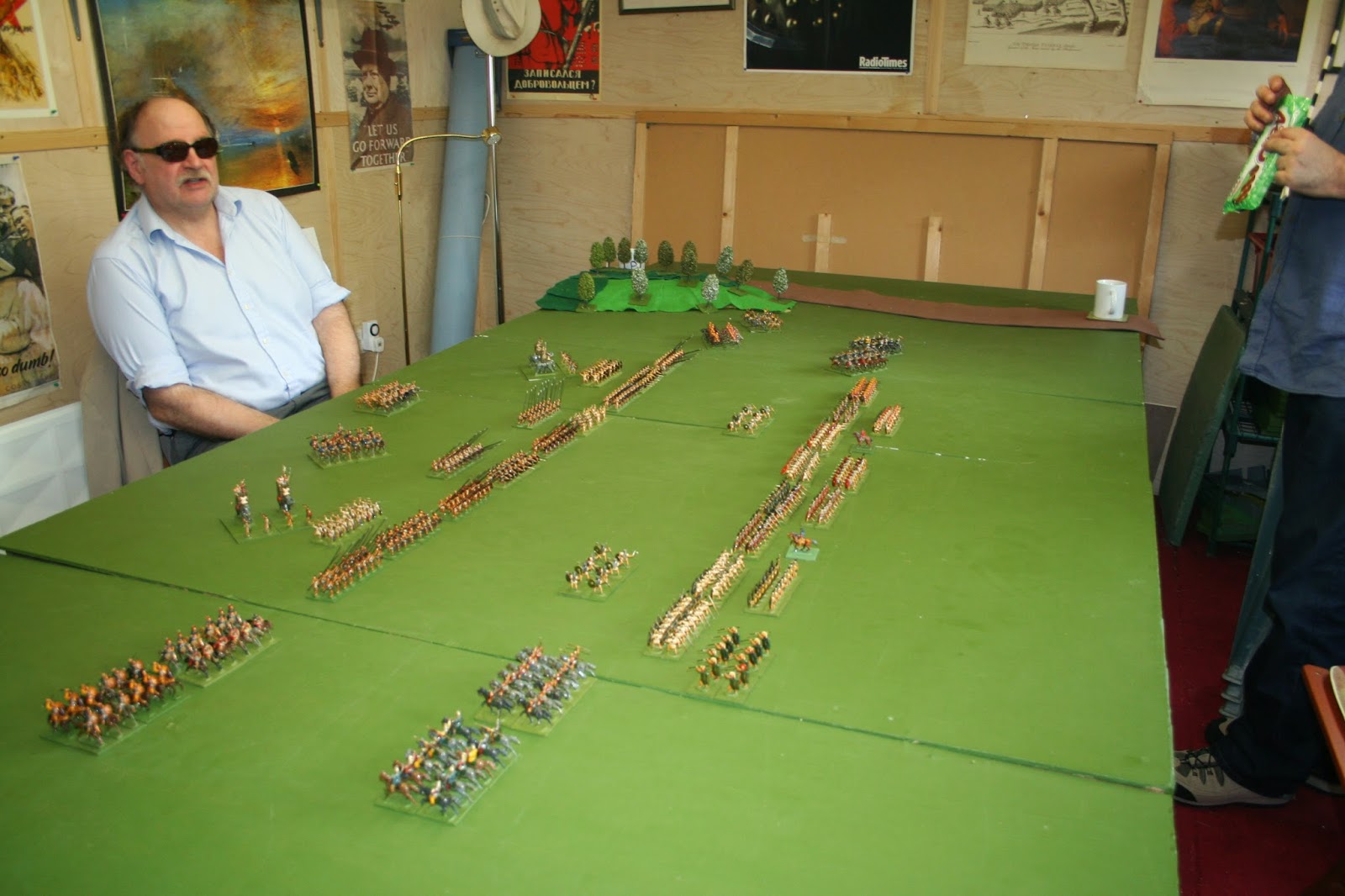 So here we are turn one or two. Phil's on the left, Chris is eating mint Aero. I have command of the two legions closet to the camera.  Phil is rapidly deploying one elephant unit to each flank from the reserve position. He's also sending an elite cavalry unit my way as well, accompanied by Pyrrhus himself. 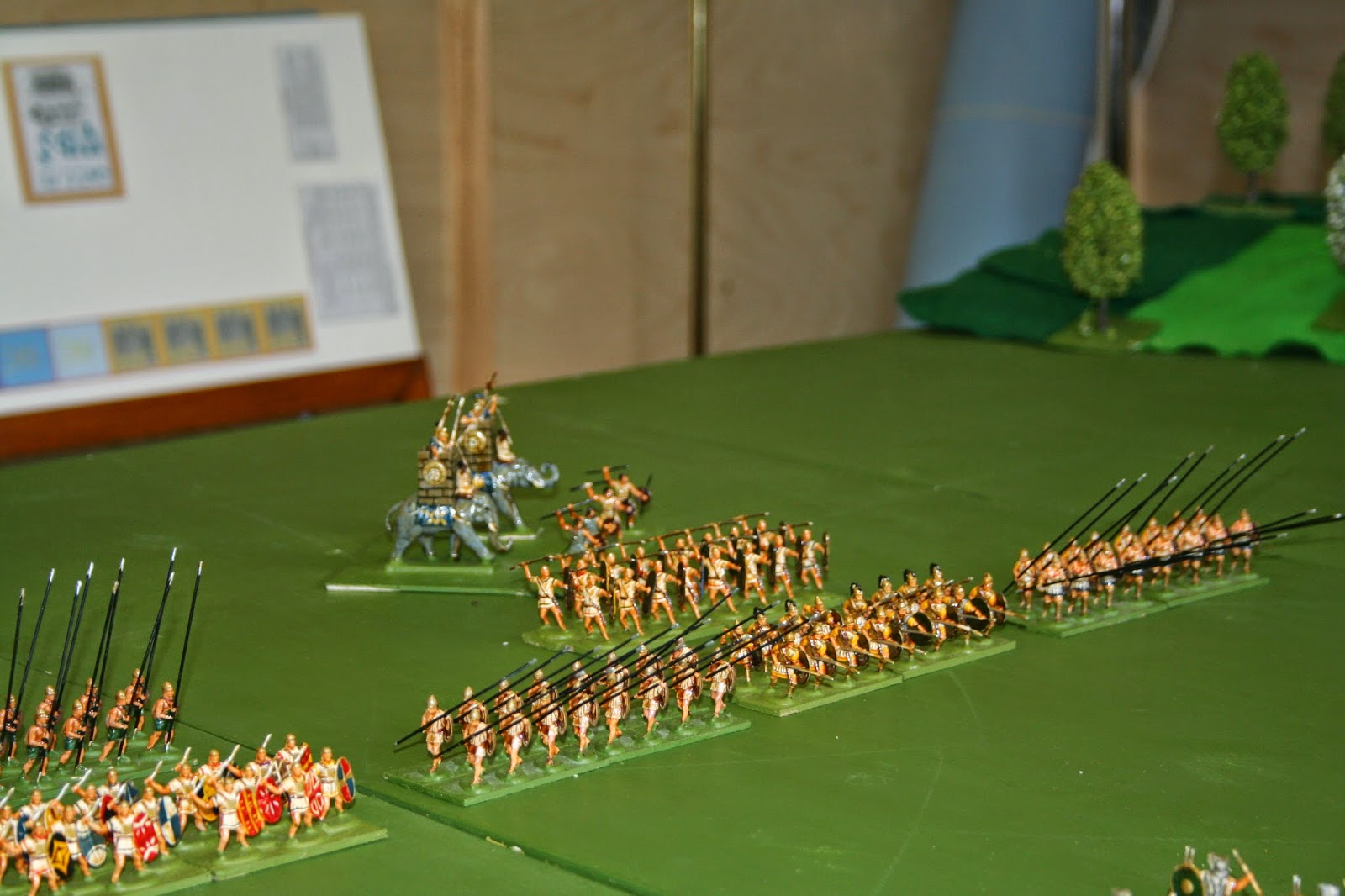 Here's a close up of the elephants on Phil's left flank, off to bother Chris. Note to self: Looks like the rear of that elephant base needs touching in with a bit of green paint. 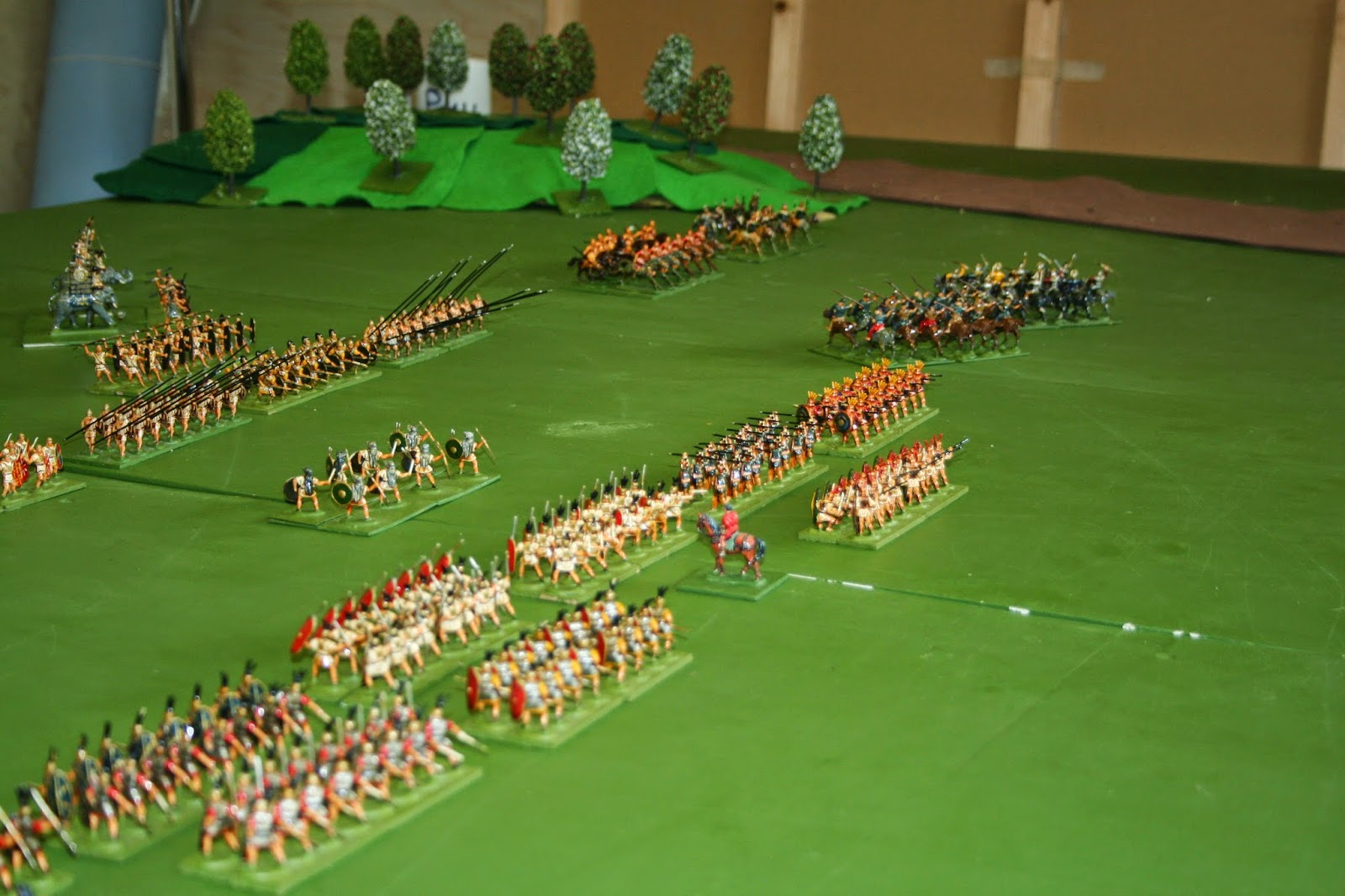 Phil has an infantry overlap on the left flank, although his cavalry is weaker (it's one heavy and one light unit). What I think he's trying to do is draw Chris out wide and delay combat until he can get elephant and cavalry reserves over there to help out. 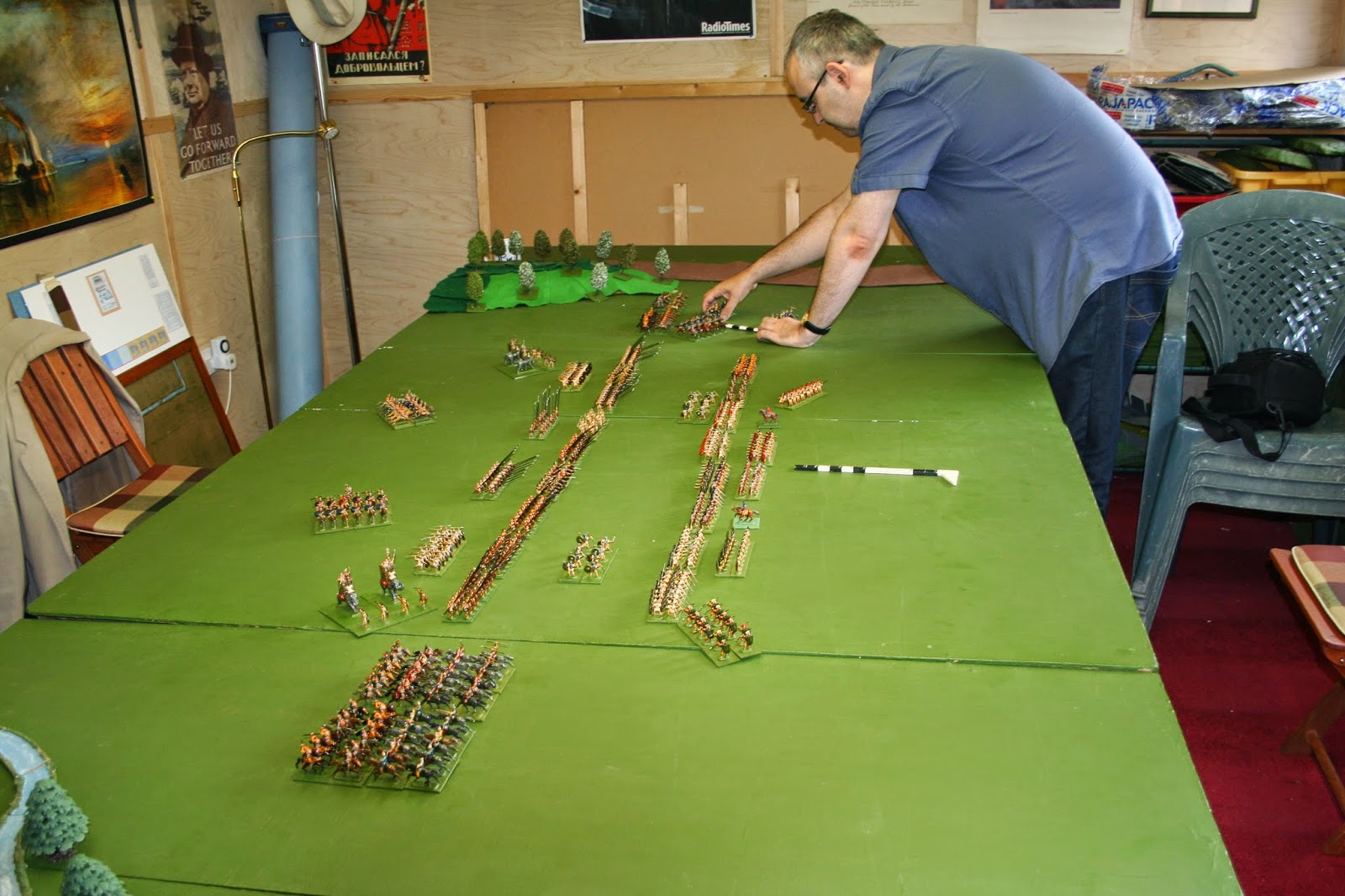 Chris is wise to Phil's tricks and so is measuring carefully to make sure he doesn't get caught out. Fat lot of good that did. Near the camera my cavalry units have matched up with Phil's. I'm rushing light infantry support across, but I think Phil's elephants looks like they'll get there first. 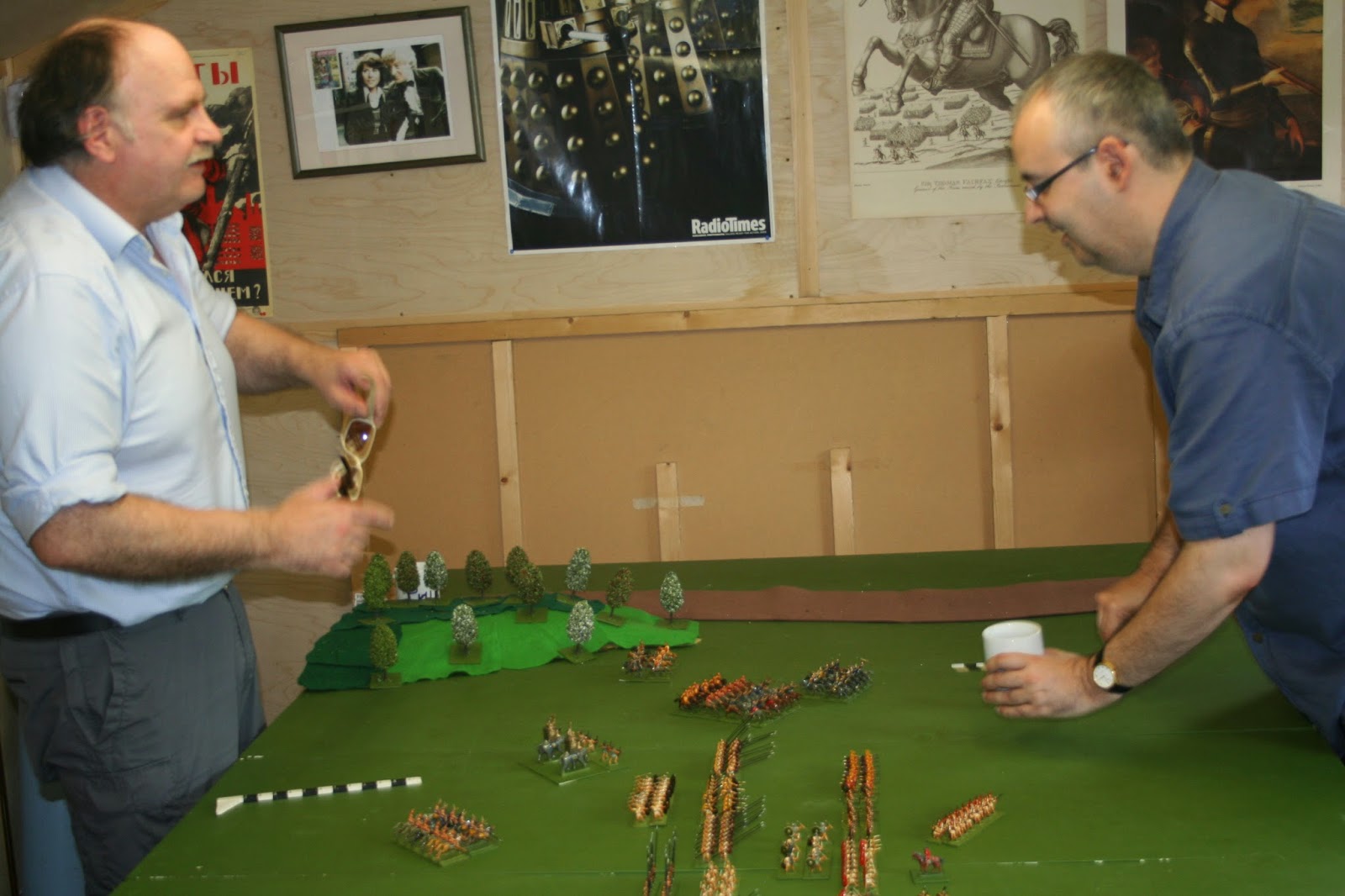 Phil is now explaining why Chris won't be able to catch his light cavalry. Or something like that. Chris clutches his coffee cup, looking for inspiration. It never did come. 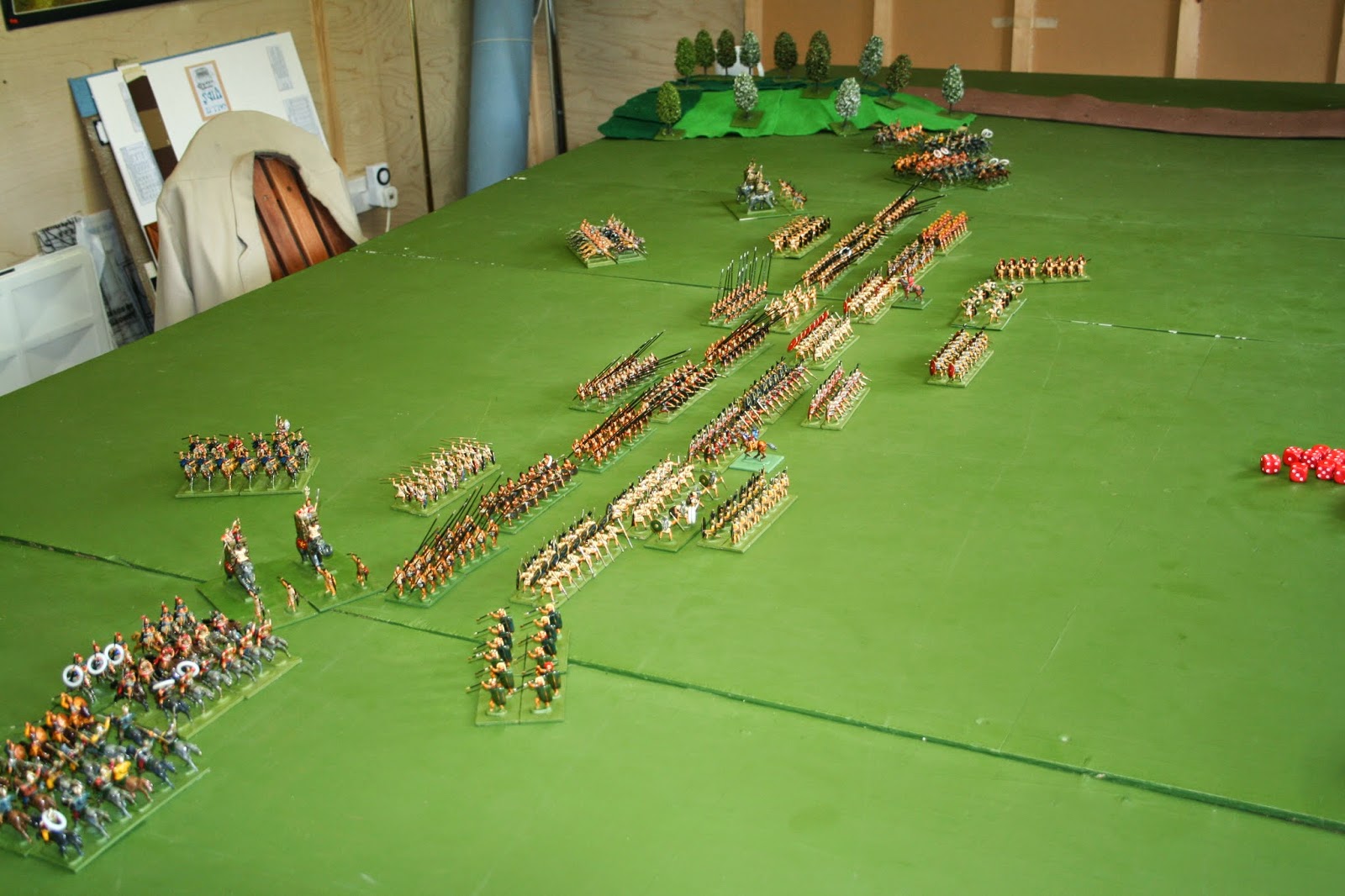 The infantry lines closed up pretty quickly. The Epirots were slightly stronger than the Romans, but if we delayed the clash we'd probably be fighting with our flanks turned. Besides, legions against phalanxes. What could possibly go wrong?

On a positive note my cavalry is holding its own, despite the elephant inspired morale rolls. And my anti-elephant light troops are closing in fast. 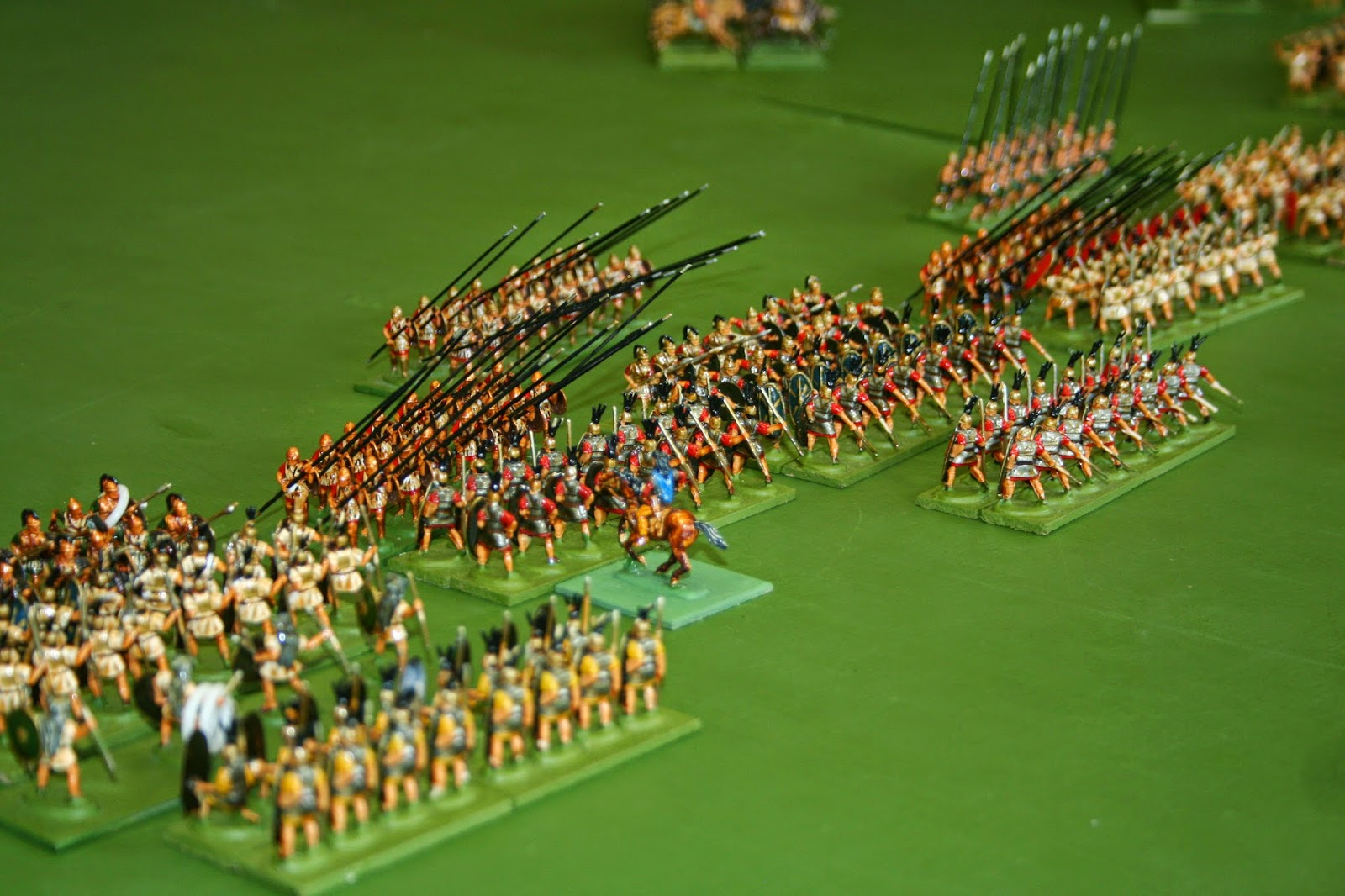 Here's a close up of the infantry clash. You'll spot my consul figure in the blue cloak in the middle, bravely inspiring his men to greater efforts. 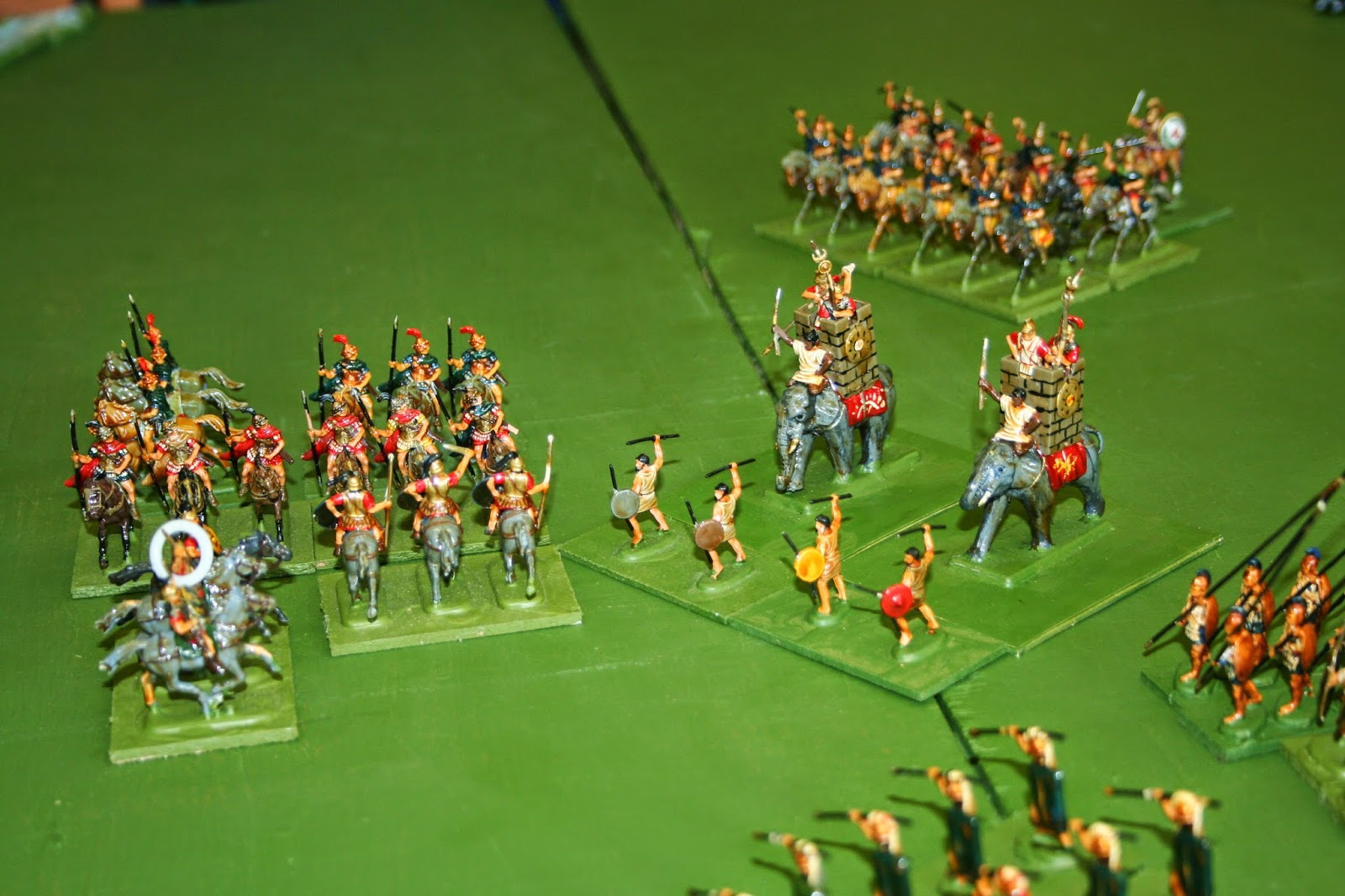 The cavalry melee on my flank is all going Pete Tong. I'm inflicting hits, but I've been flanked by the elephant unit. It's not looking good. Why do I let these things happen to me? 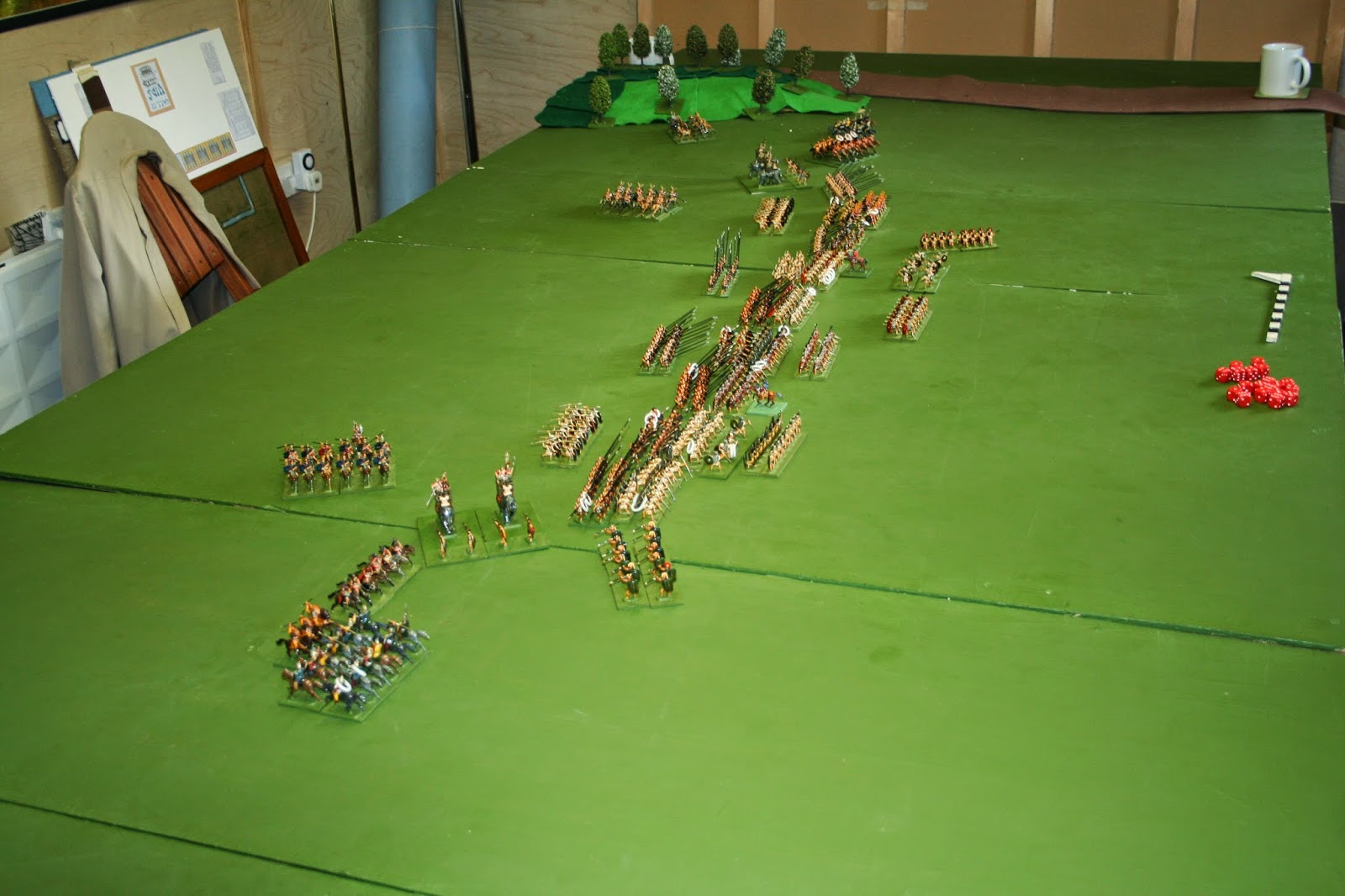 A long shot of the battlefield. I'm down one cavalry unit on this flank, but the infantry fight is pretty evenly matched. Chris is being pulled backwards and forwards on the other cavalry flank, but at least he's stopped the line being turned, and he's able to send some reserves over to stop Phil's spare left hand phalanx getting behind his line. 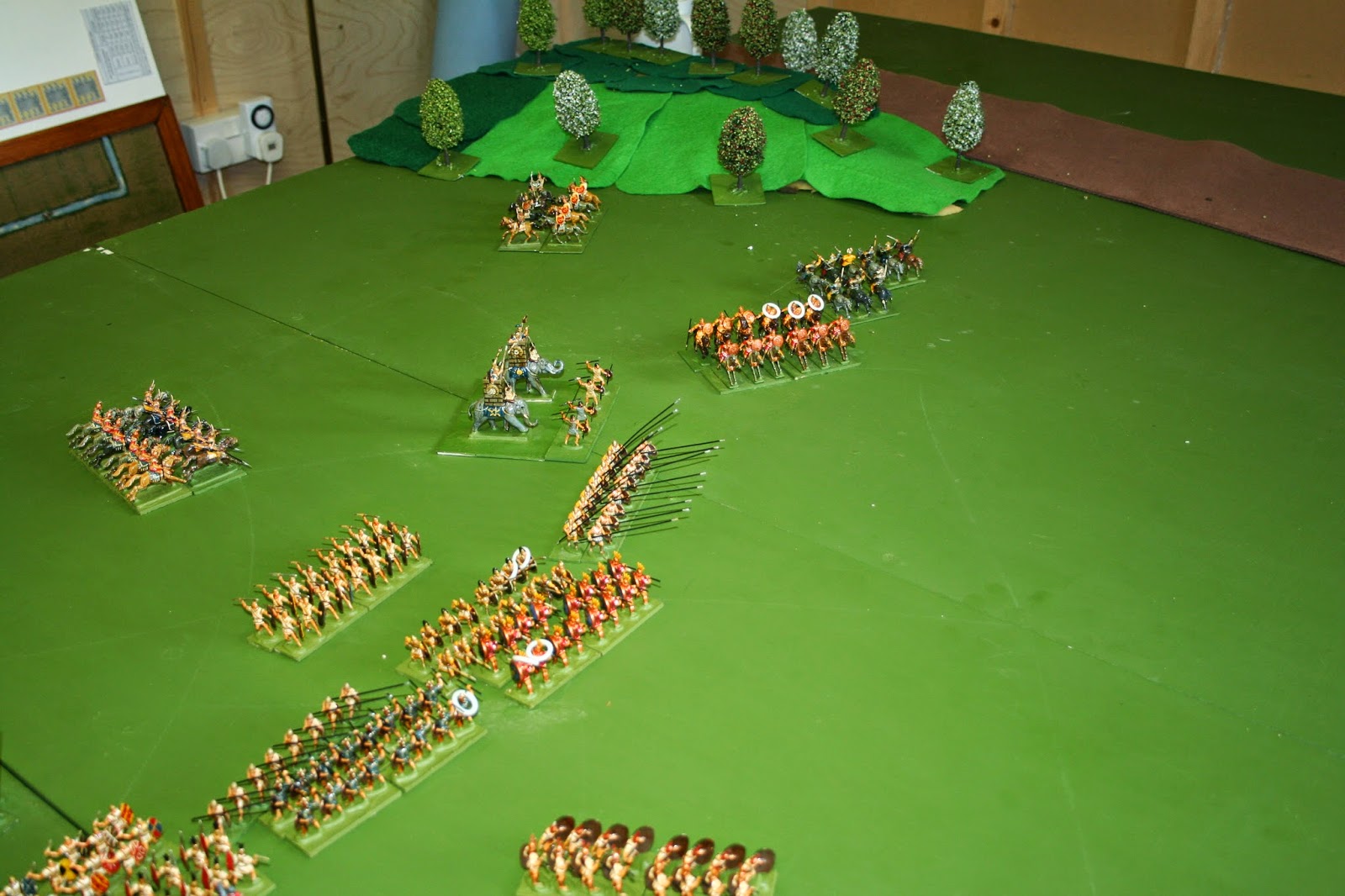 A better view of the Roman right flank. Chris is down to one heavy cavalry unit by now (that's his with the three bases). Phil's taken three hits on one of his heavy units, but alas Chris lost a whole unit inflicting them. This was partly due to the elephant morale rolls. Chris is now trying to play hide and seek with the mounted troops on this flank, trying to delay them some more. 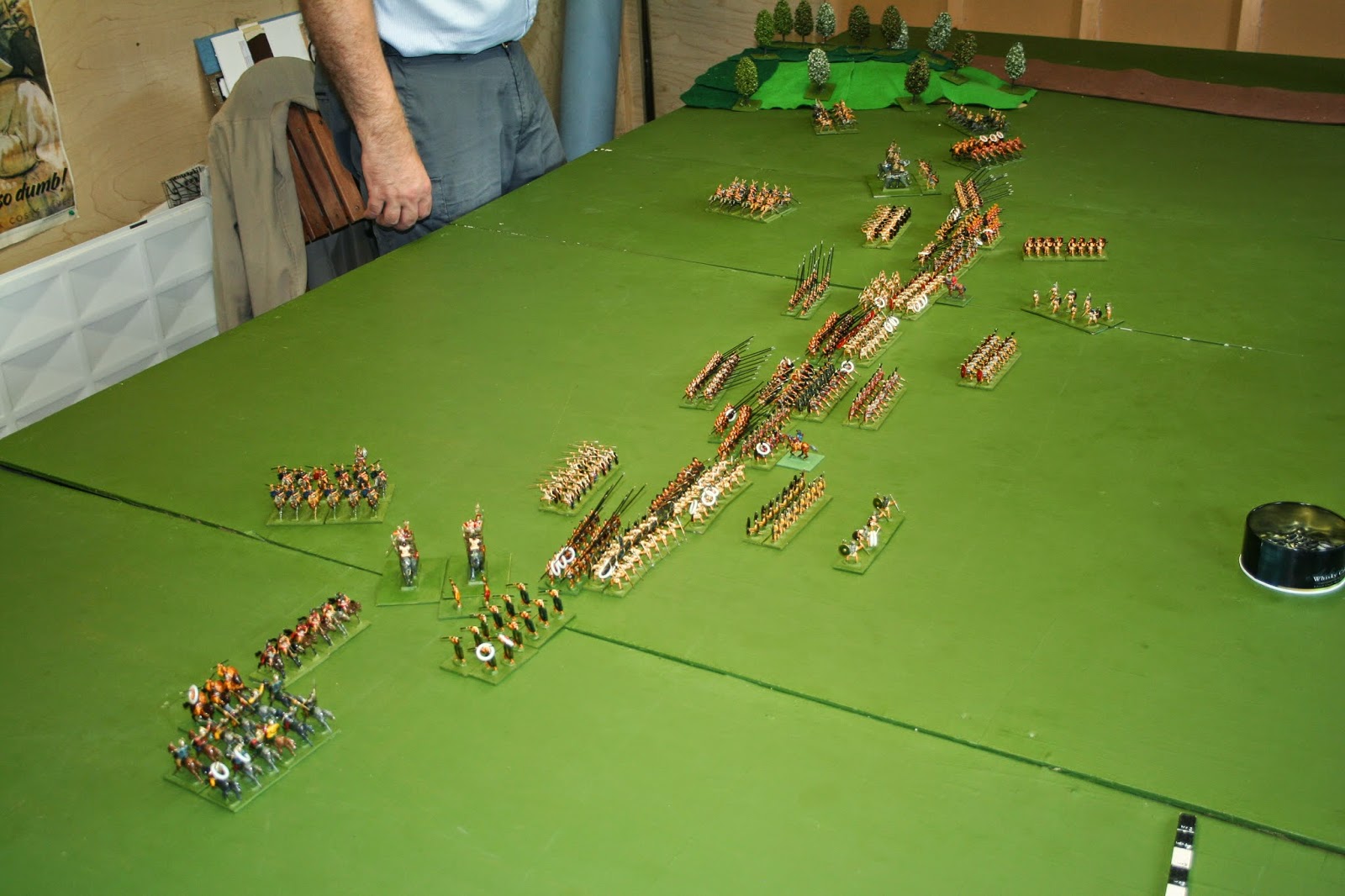 The action is intense all along the line now. I've managed to get my anti-elephant light troops into the elephant unit on my flank, and with a bit of luck I can wipe out Phil's outer cavalry unit before his reserves catch up with me. 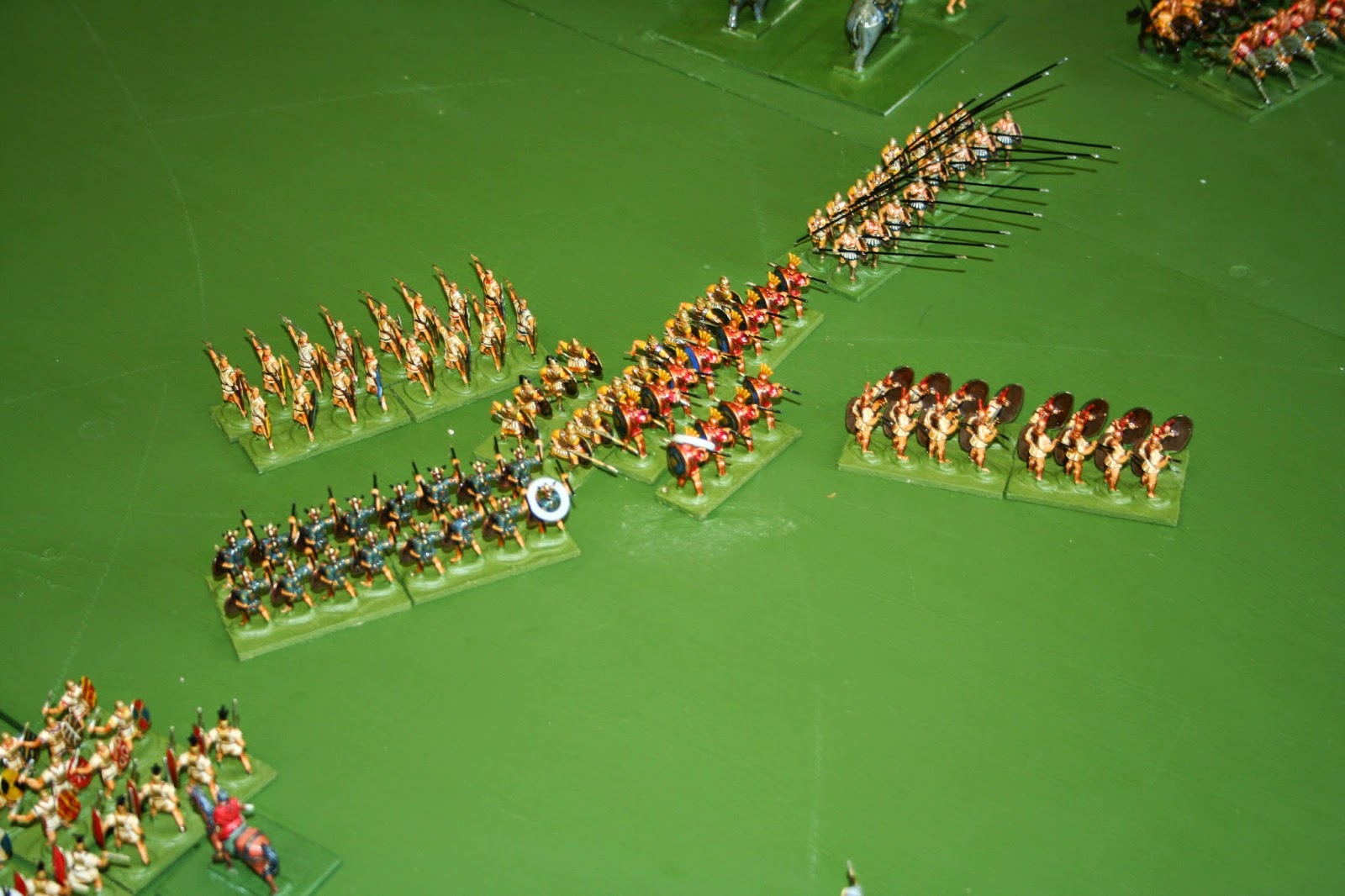 At last some undoubted success for Chris. His blue-tuniced unit has broken its opponents for only one hit in exchange. Can it now exploit the hole so created? All it needs is for the unit on its left, ably led by Consul Chris (with the red cloak), to hold out for a turn or so. 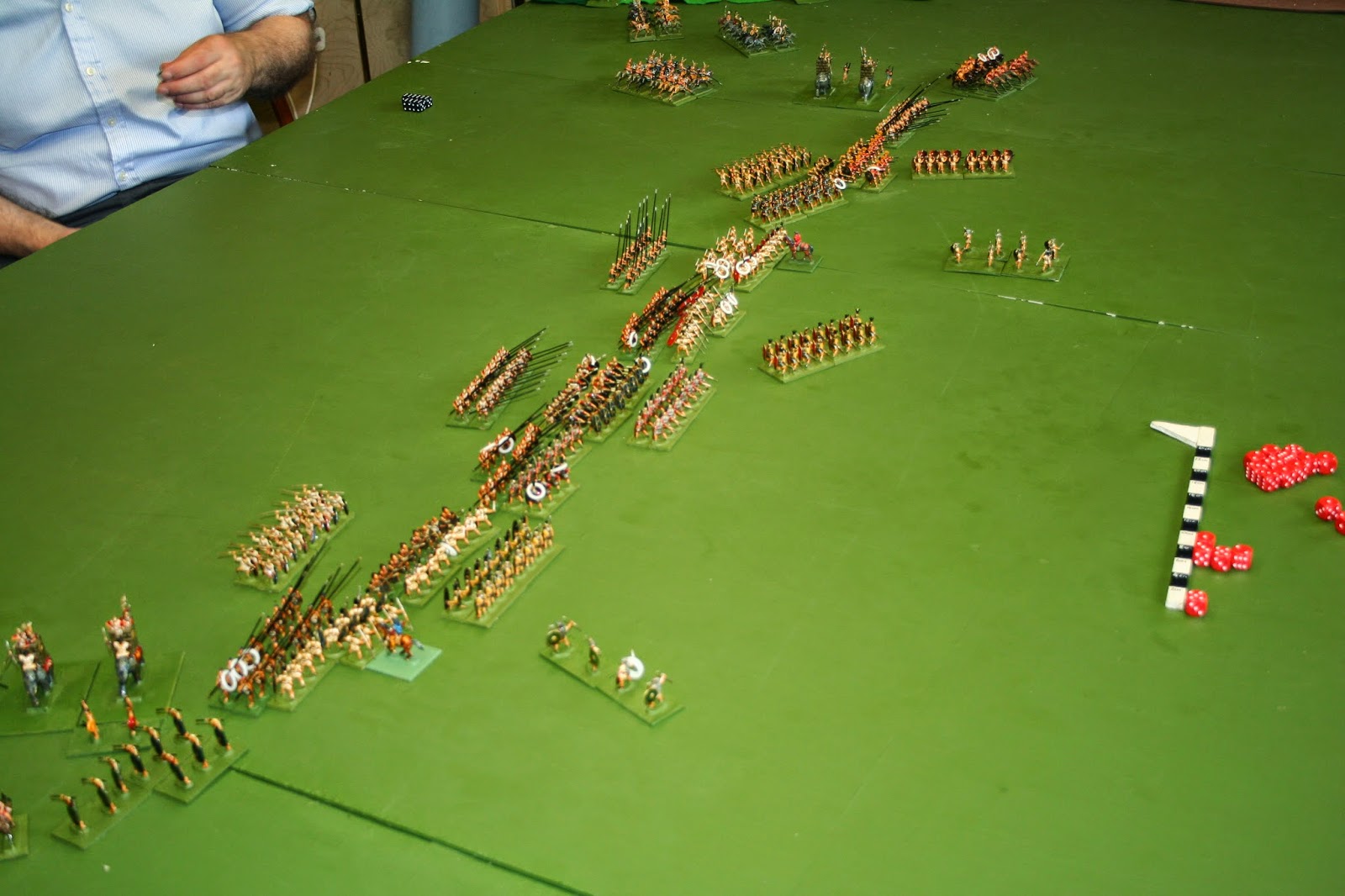 It's not clear from this picture who is winning the infantry fight. I thought at the time that we were just edging it. 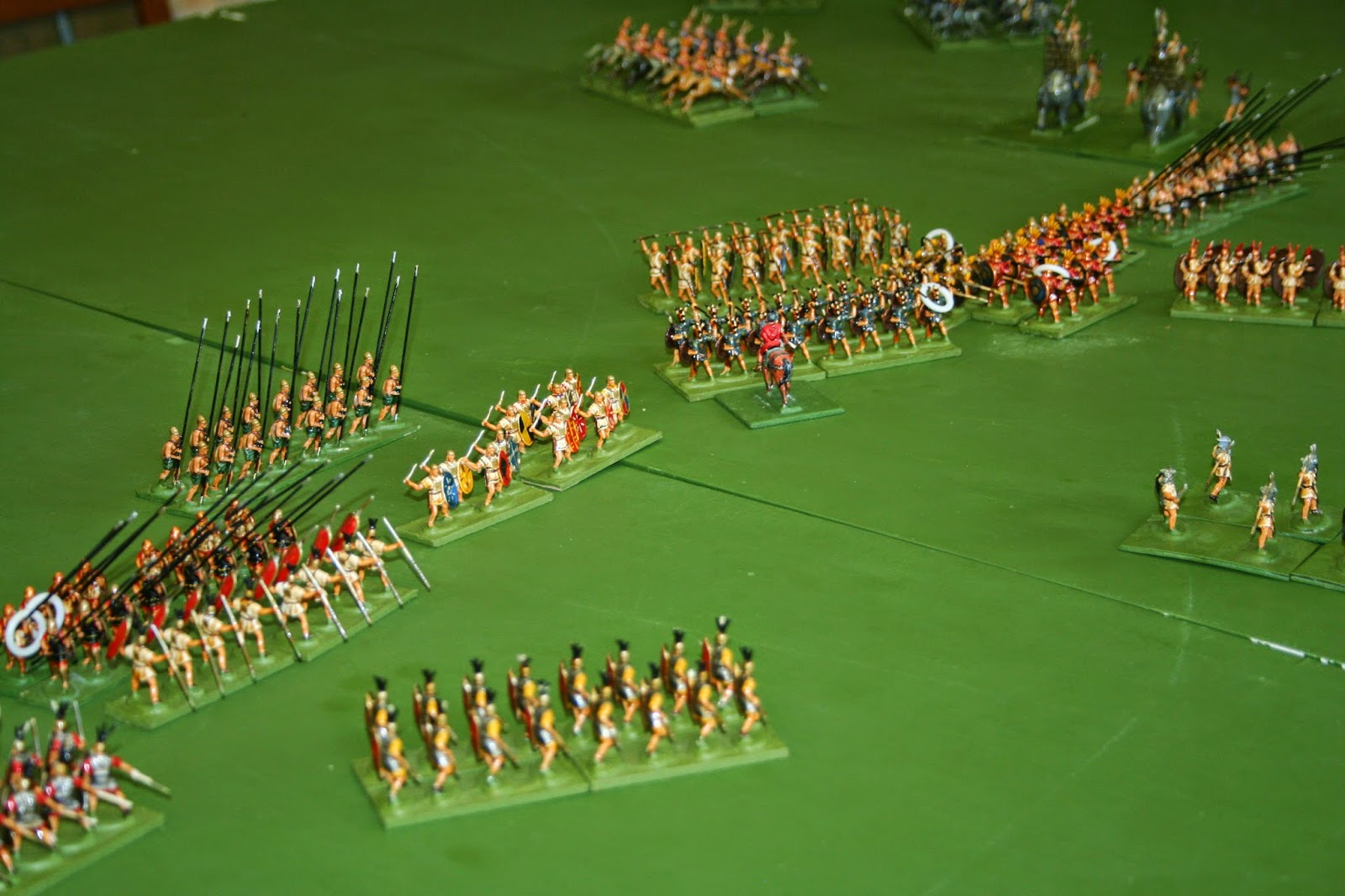 Alas the unit to the left of the gap collapsed the next move, leaving Chris' Consul to scurry for shelter with another unit. This was not a good omen. In fact it became a bit of a theme for this flank for the rest of the game. 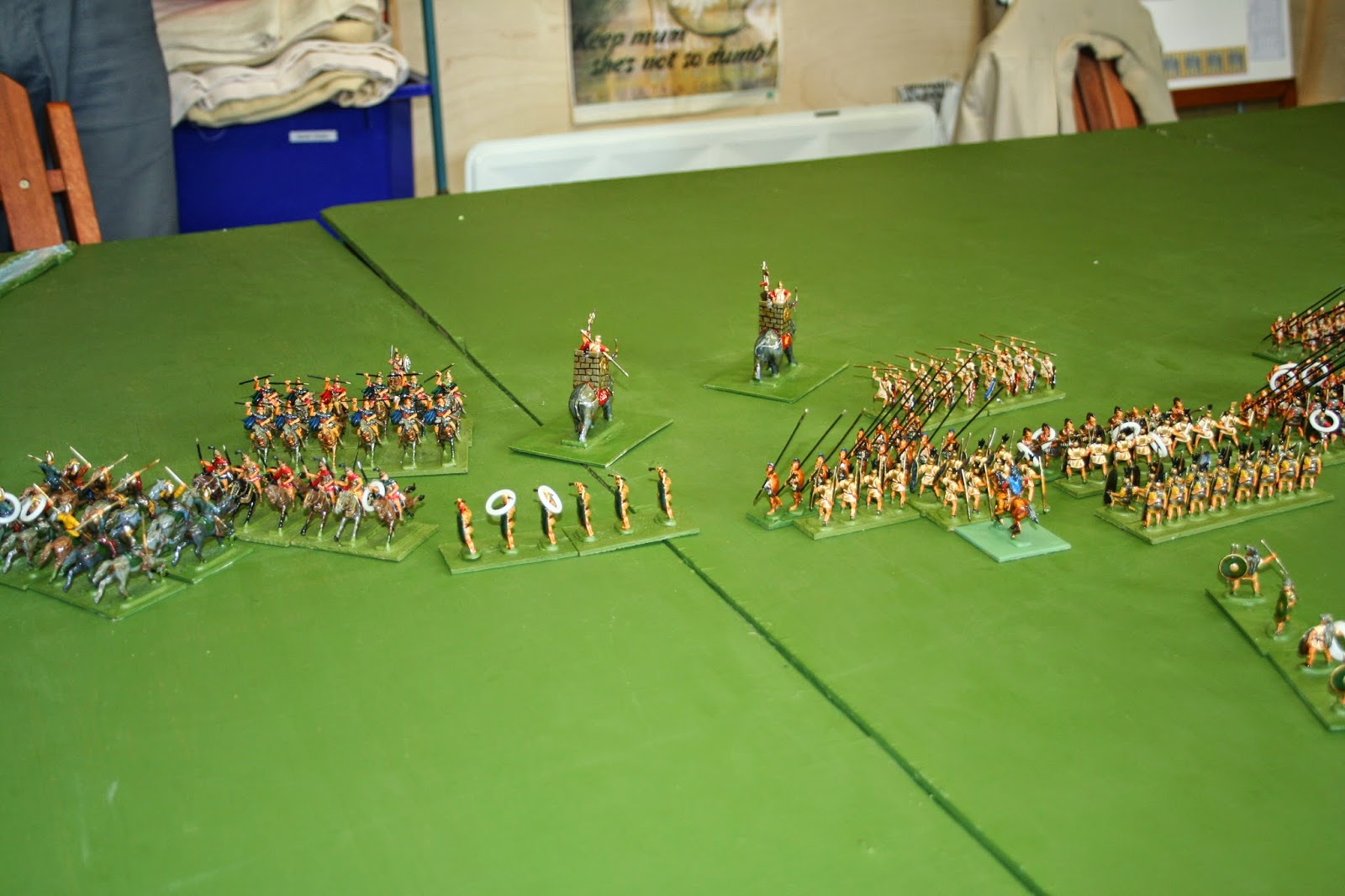 My light troops came up trumps against the elephants and broke them on my flank. Here they are, fleeing to the rear and unfortunately missing all of Phil's surrounding troops. Shame. Could really have done with some pachyderm friendly fire to help us out. 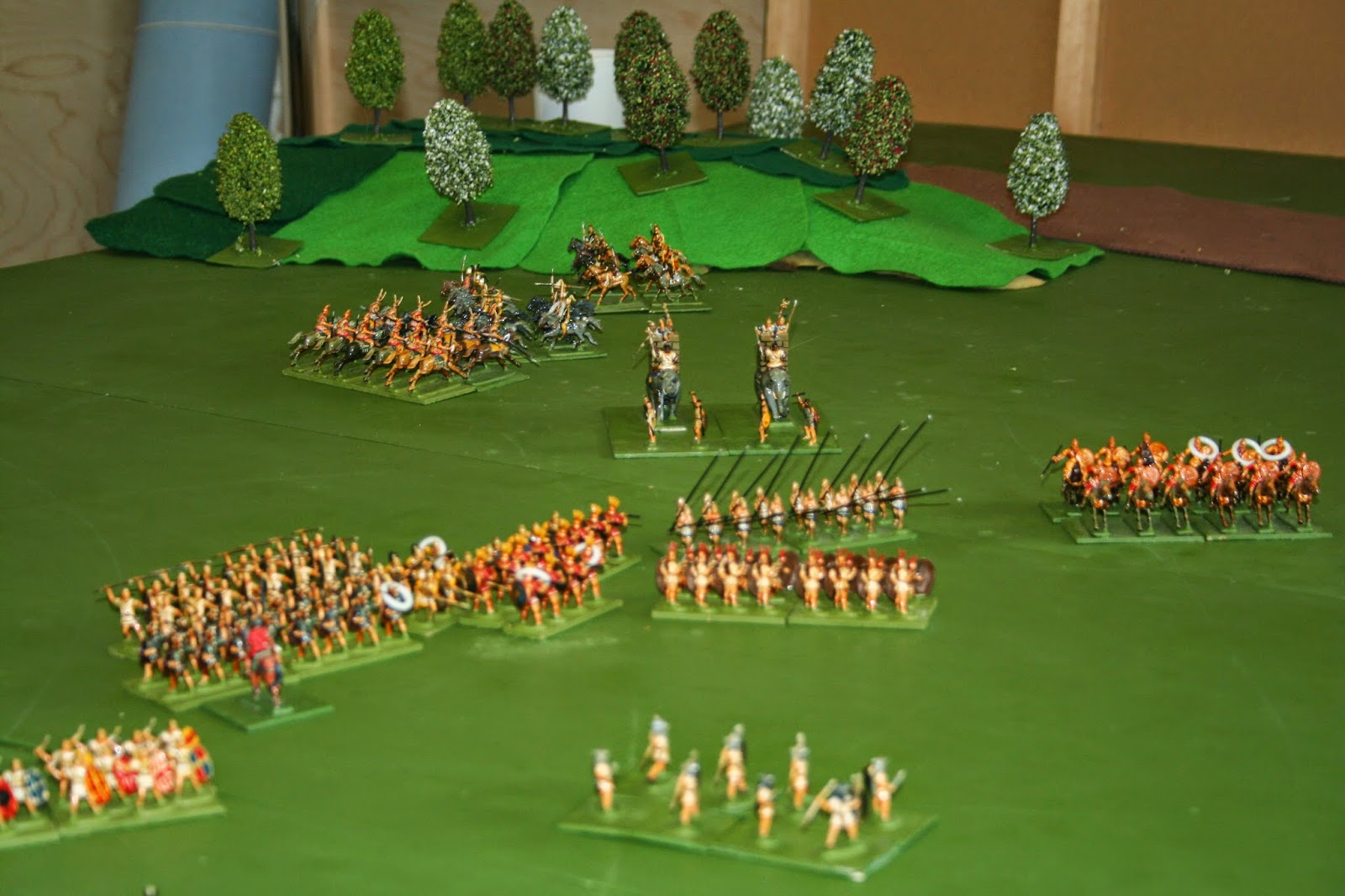 Our right flank is looking a bit of a mess now. Whilst Chris is plugging the gap where that spare phalanx is turning the flank, those cavalry and elephants have nothing much to get in their way. 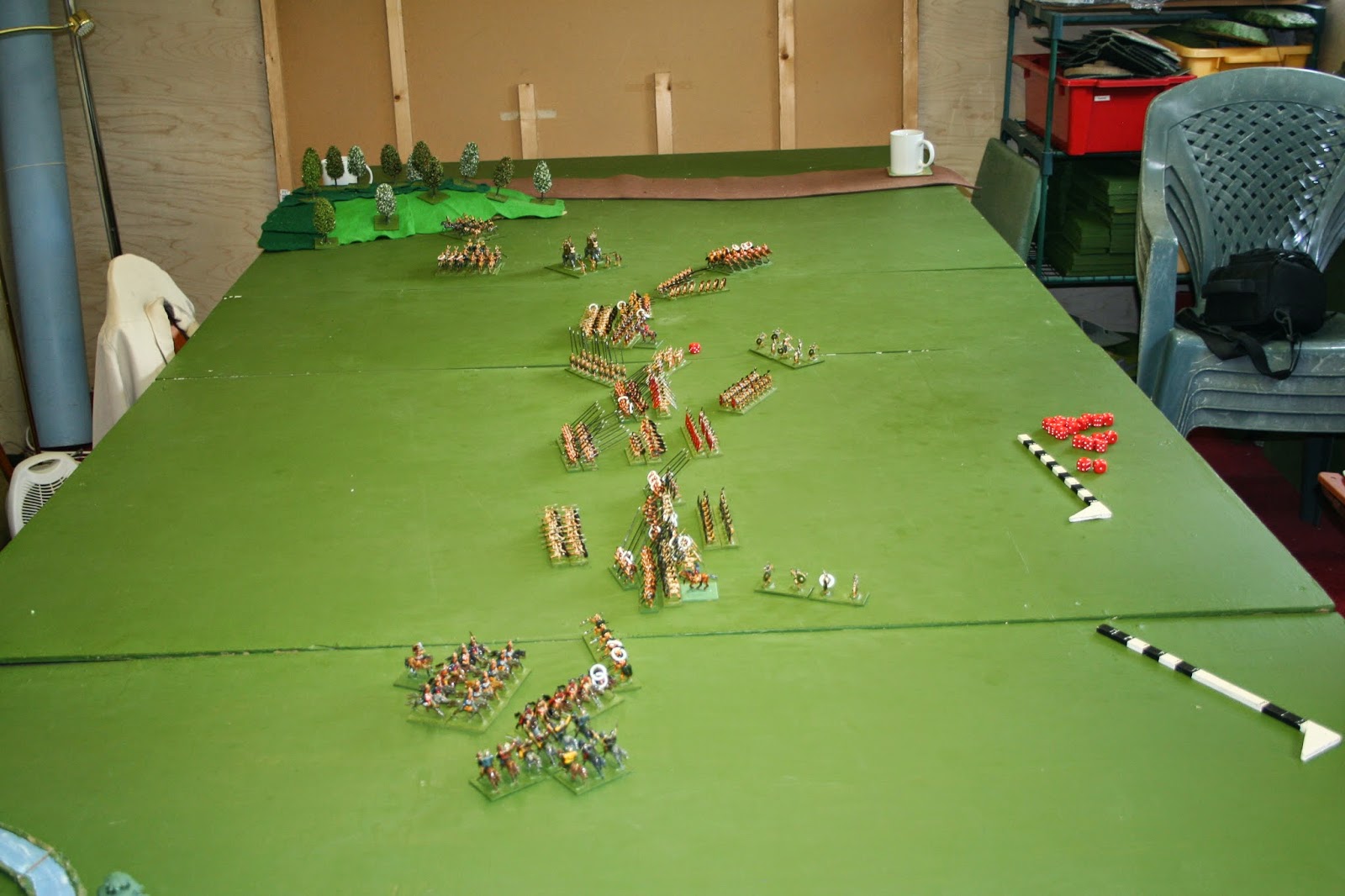 There's holes appearing in both sides' infantry lines now. I think by this point I was coming to the conclusion that we were losing. 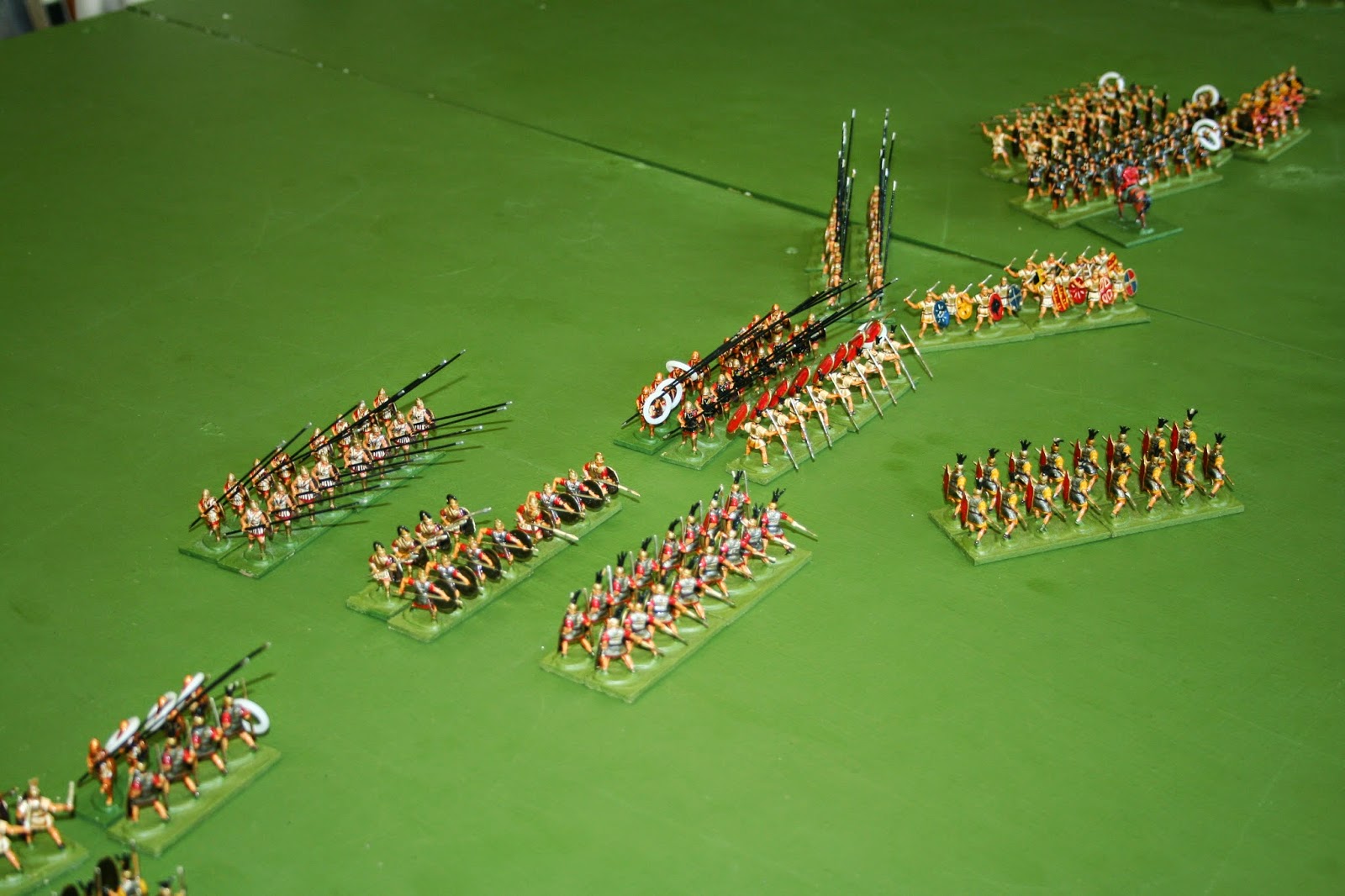 Our reserves are being sucked in quicker than I'd like. That red shielded unit in the middle of the picture looks like it'll fold shortly, and the yellow shirted "triarii" are rushing across to stop the unit that's already broken the line. Our blue-tunics at the top of the picture have been well and truly held up. In the lower middle I've inflicted one base loss on that unit backed by the phalanx and lost a unit in the process, so that's my reserves waiting for them already. 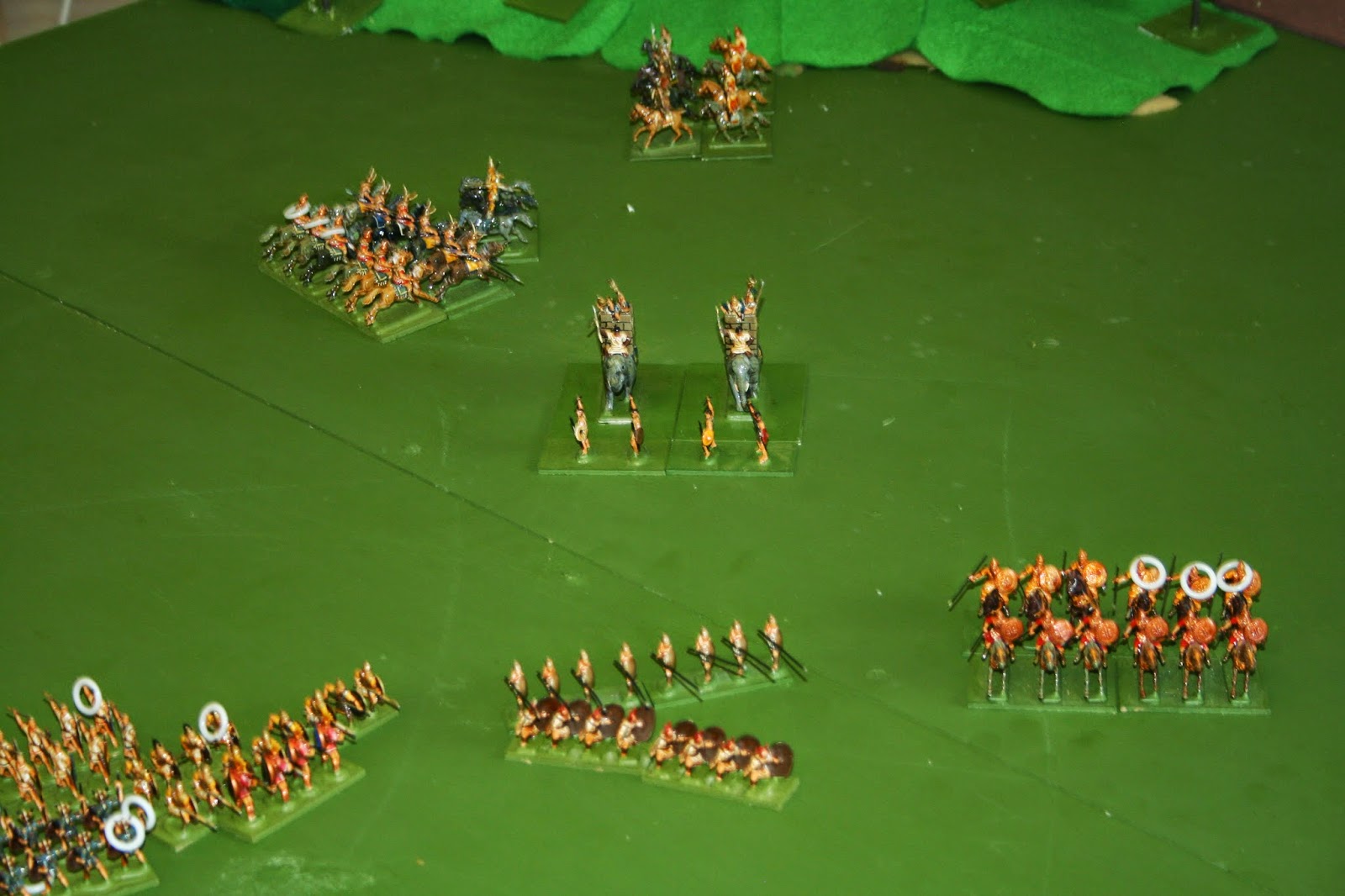 Chris' right flank goes from bad to worse. He's going to lose that red-tuniced unit down to one base in the bottom left of the picture, and the conflict at the end of the line between the turning phalanx and the reserve unit has been quick and bloody. At the top of the picture you can see Chris' last cavalry base about to die. 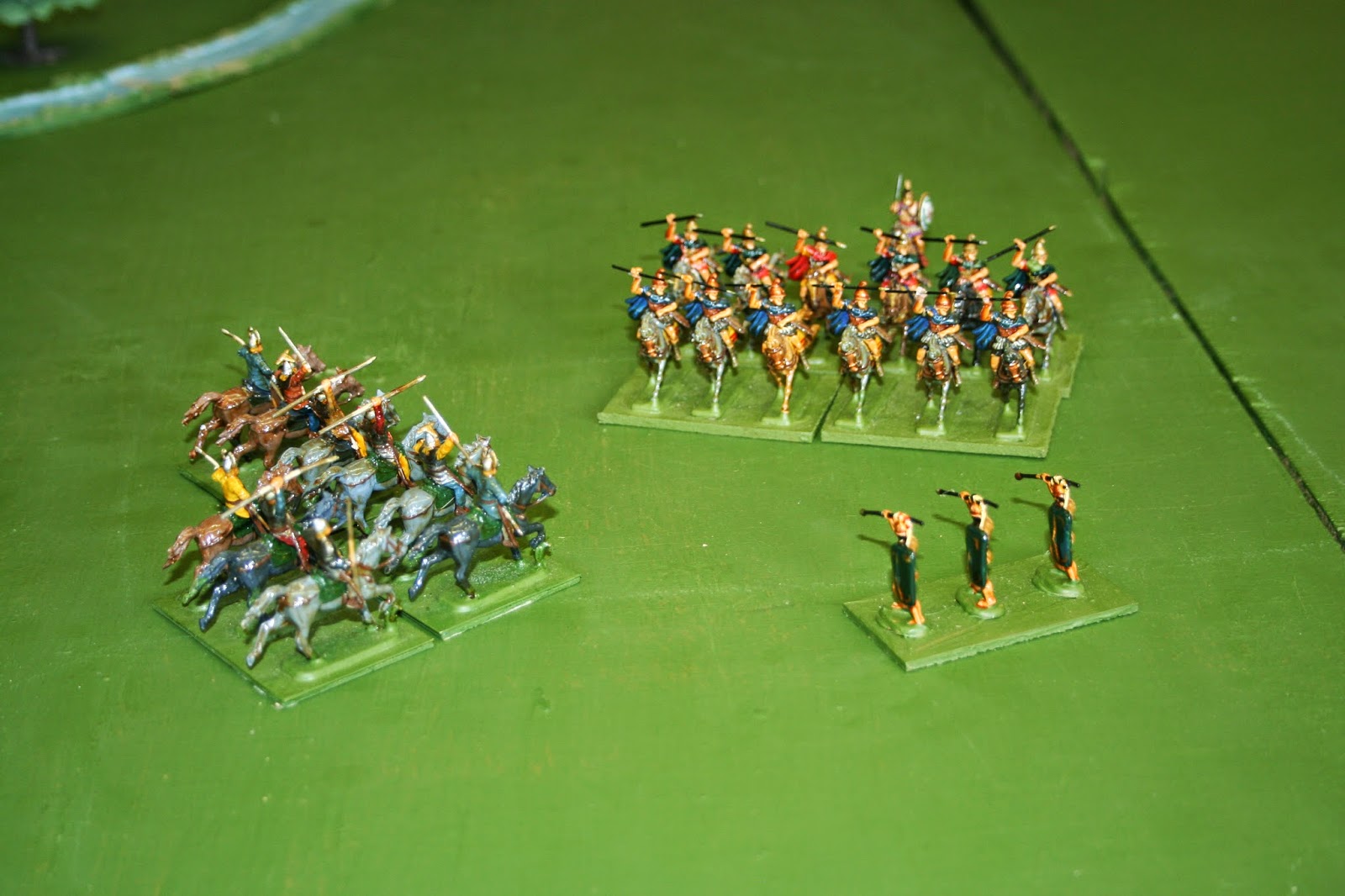 A-ha! A victory. Can you see Phil's other cavalry unit? The one not commanded by Pyrrhus? No you can't - 'cos I just killed it. 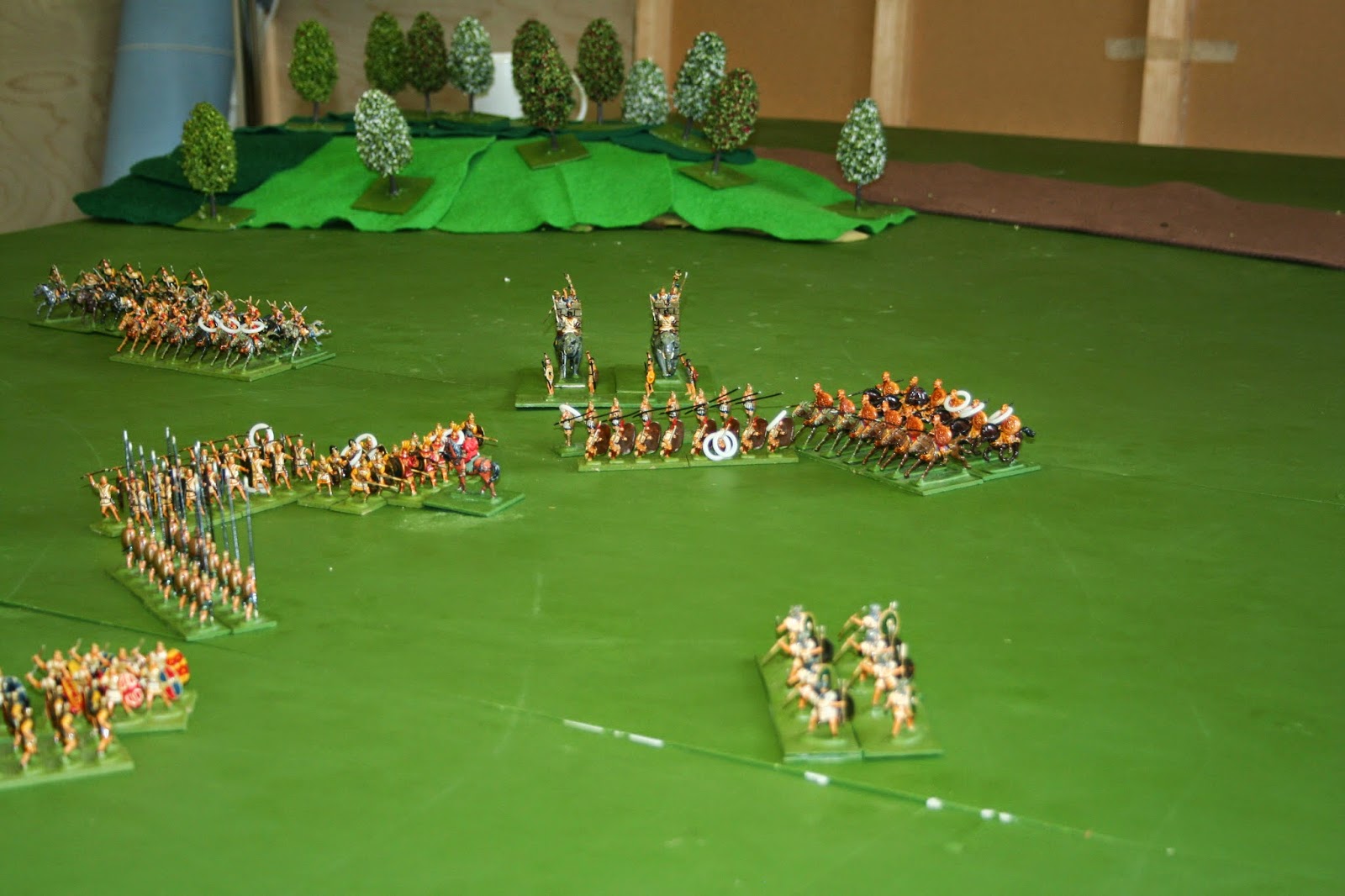 The blue unit died suddenly, and Consul Chris hopped along to another unit. Best of luck guys. Phil has now got his spare cavalry unit into the flank of our flank guards. Um. 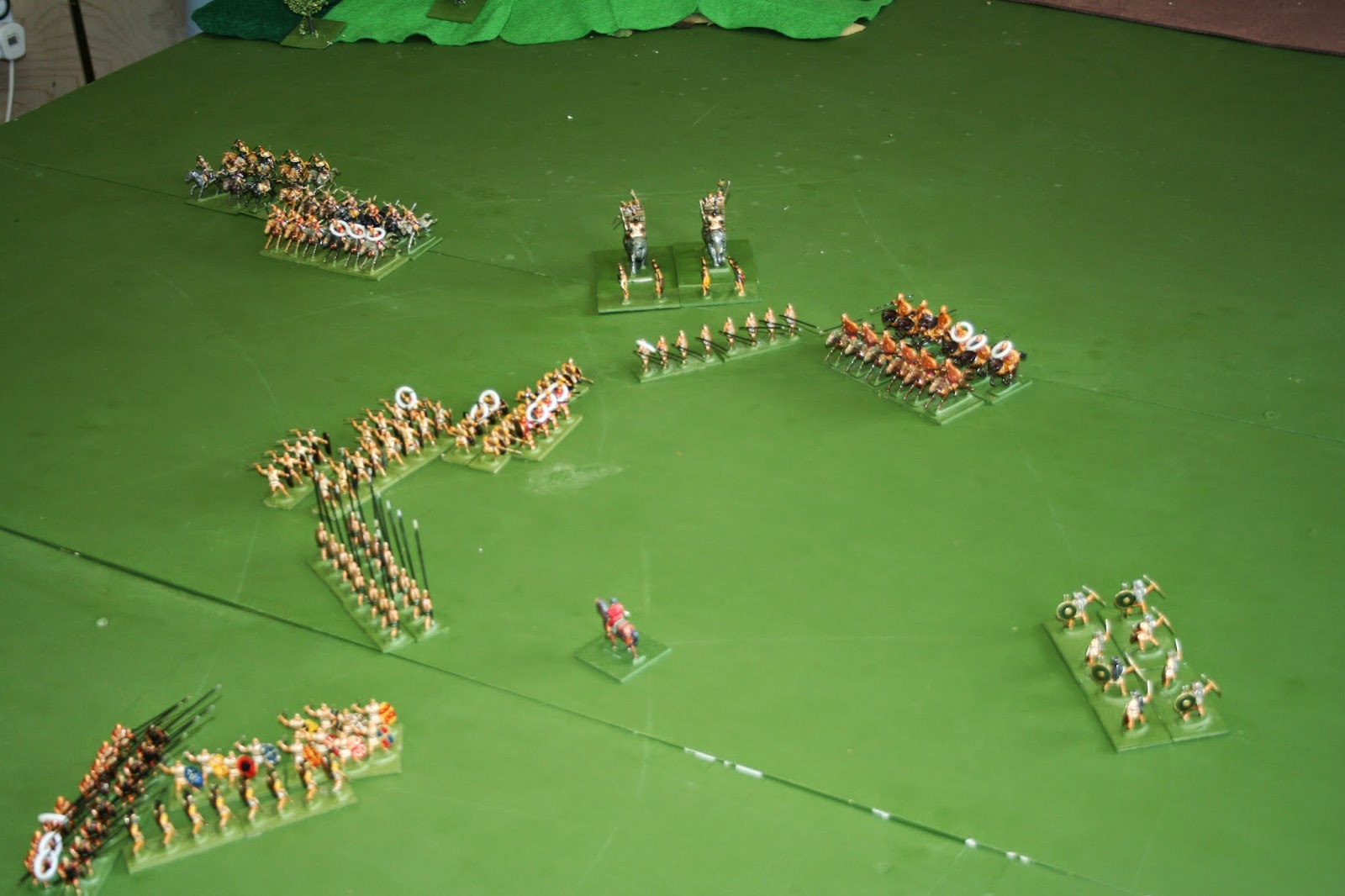 And before you know it Chris' Consul figure has lost another unit and is standing in the middle of a field on his own. Sort of a "Billius Non Matius". That velite unit bottom right is all he has left of two legions. 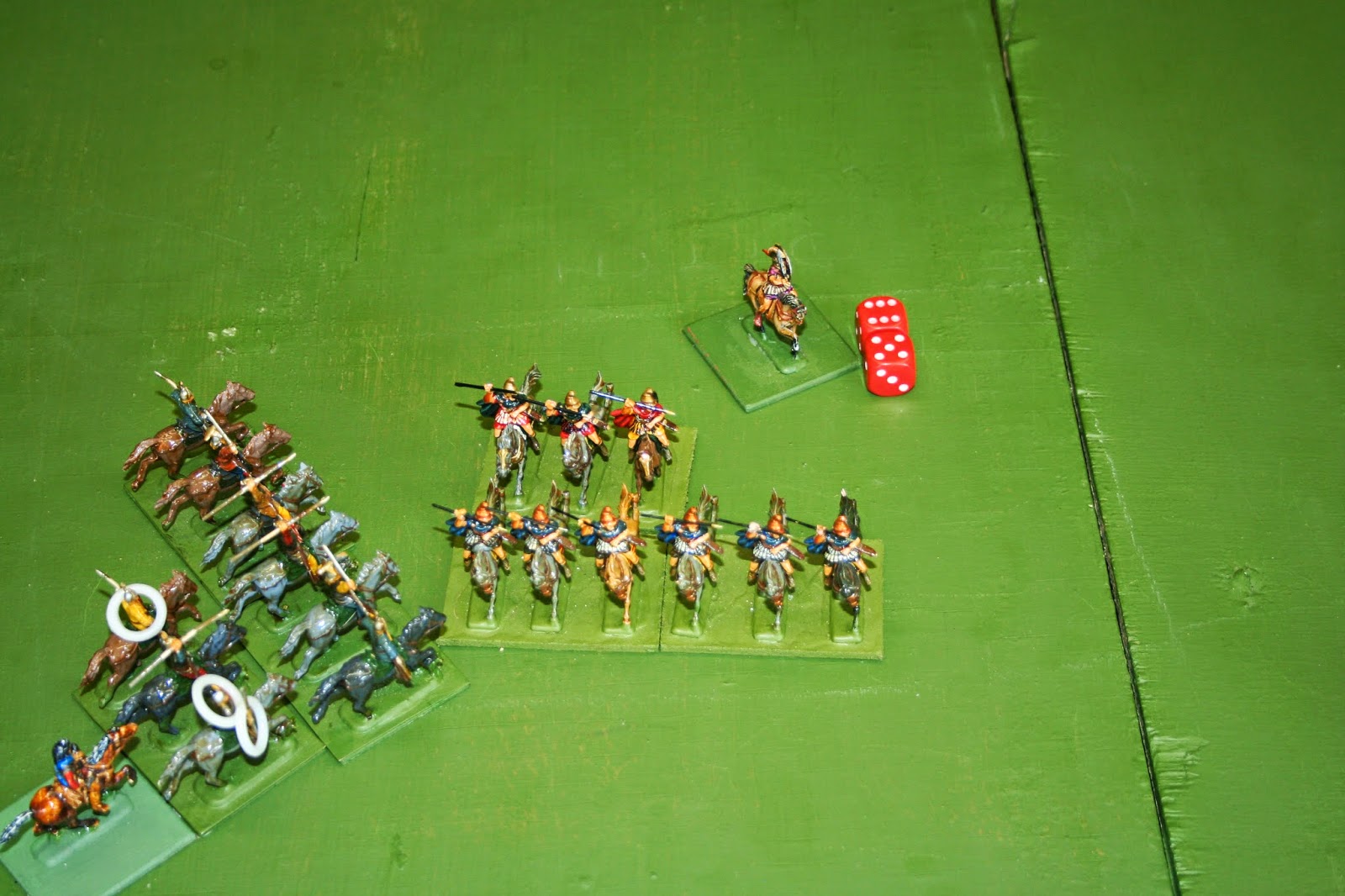 However, things weren't going all Phil's way.  He finally gets Pyrrhus into action and promptly dies after two rounds of combat. No special "Pyrrhus is still alive" rule for this game, unlike Heraclea. 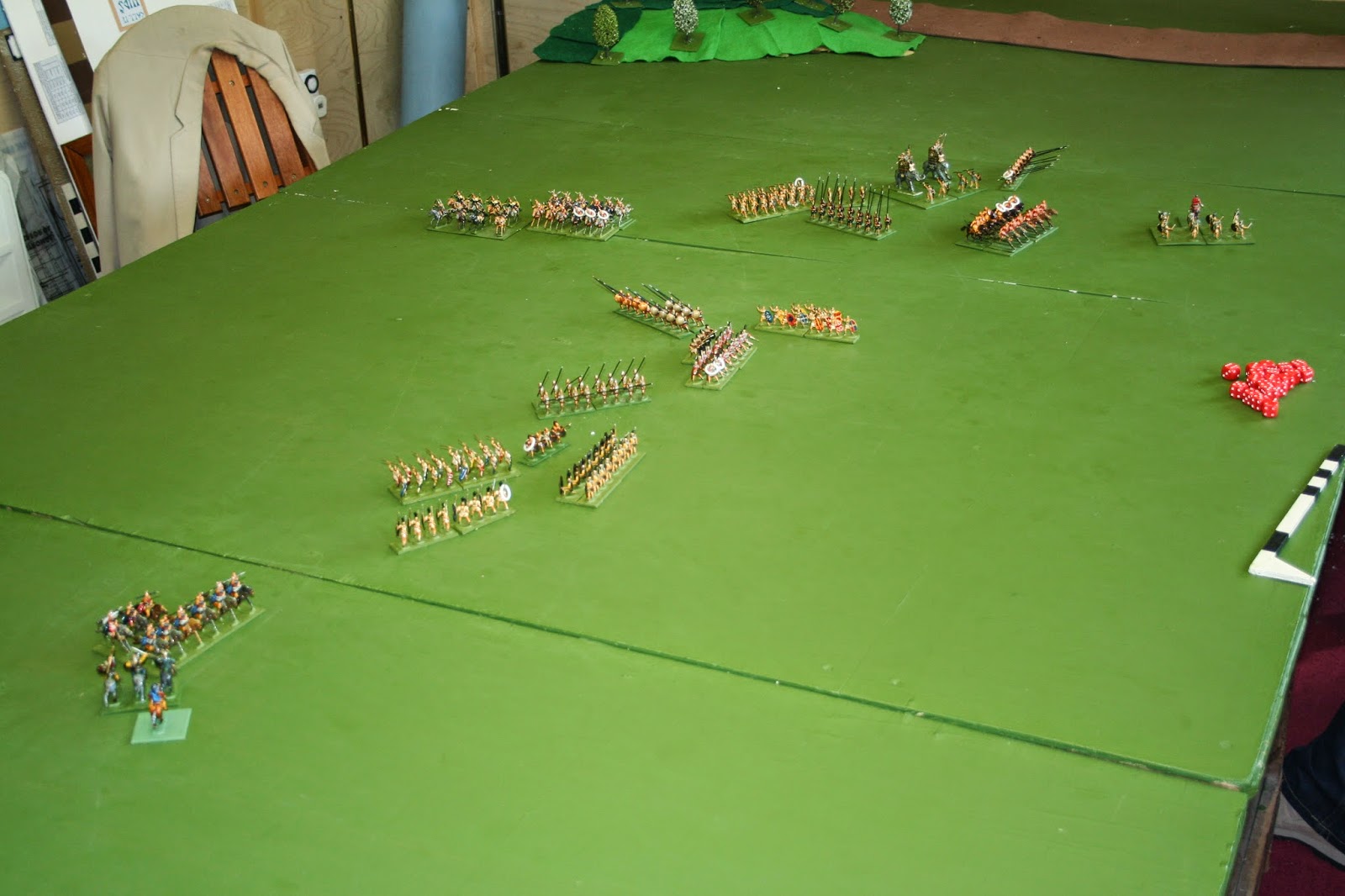 And then it was all over, pretty much, as another couple of our infantry units died.

A pretty decisive win for Pyrrhus, with not a lot of casualties compared to the Romans. Just goes to show that if you have a bigger army with better quality troops you'll probably win.

I'm not sure what this tells us about Asculum as a battle. The descriptions we have don't tally and there's no clear description of the action anyway. Of the battles in "Lost Battles" this is the one, so far, that is the closest to being totally made up.

It took the three of us about 3 1/2 hours to play the game, including a couple of coffee breaks, so once again very pleased how AMW holds up in the classical period and delivers plausible results in a reasonable time frame for a game.

That's us done with Phyrrus, I think. Might look at some Roman v Gauls games next, but I fear that the warband rules won't favour the Gallic masses and they'll be a bit of a walkover for the might of Rome.