After its successful try out at CoW I put Rapid Raphia on for the Monday Night Group this Wednesday. Chris W & Phil, who had missed the session at Knuston, played Ptolemy & Antiochus respectively. Even making allowance that it was the first game for both of them it didn't play as quickly as I would have liked. We had a nail biting finish but it took an hour and a half. The system has a lot of decision making in it as the players have to allocate cards each turn, althoguh I think that after playing the game once the initial turns will pass much more quickly. 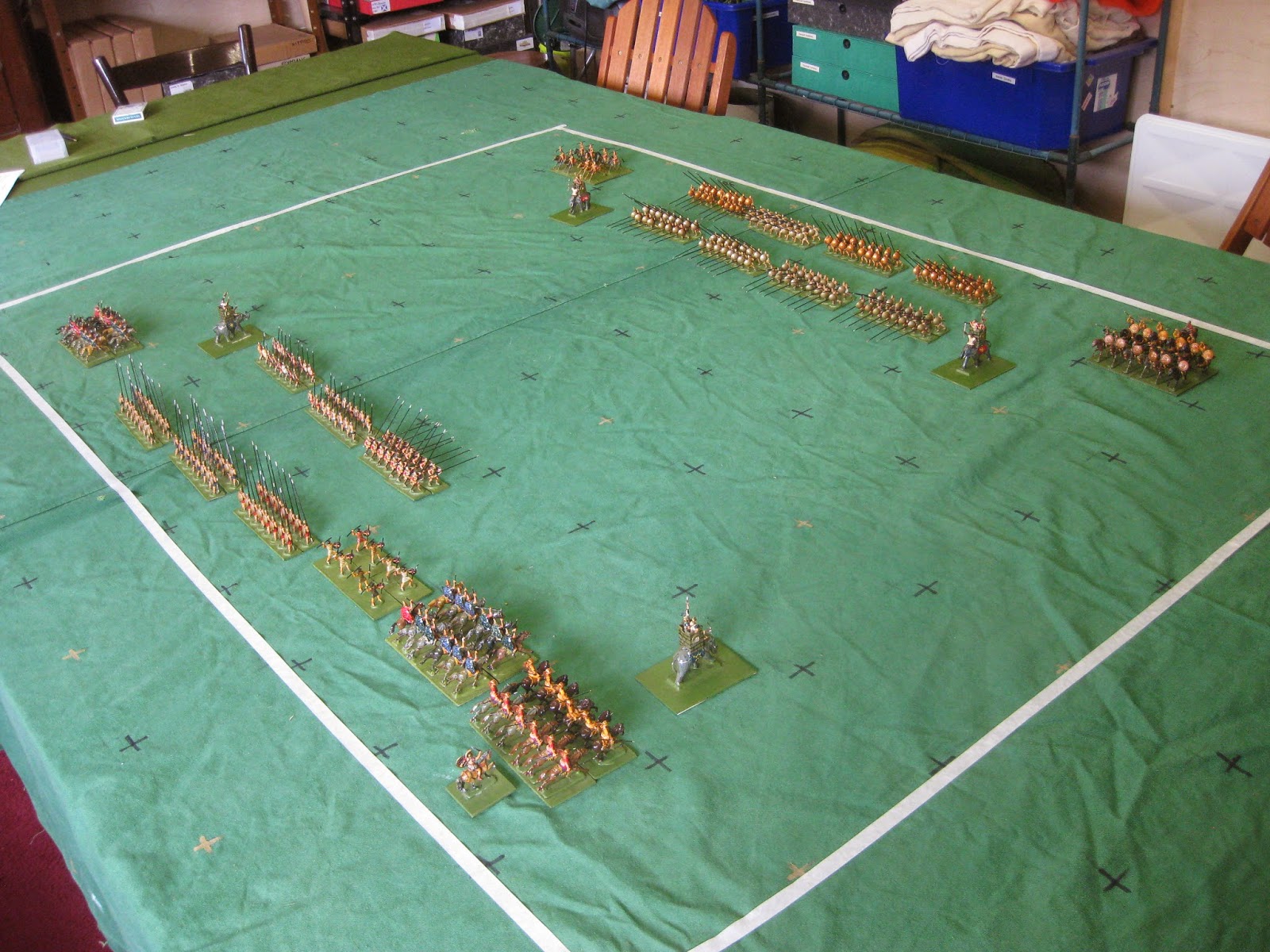 For this game I put the big cloth out and upped the unit size to four bases each. This is unnecessary but improves the look of it and allows for the use of bigger playing cards. 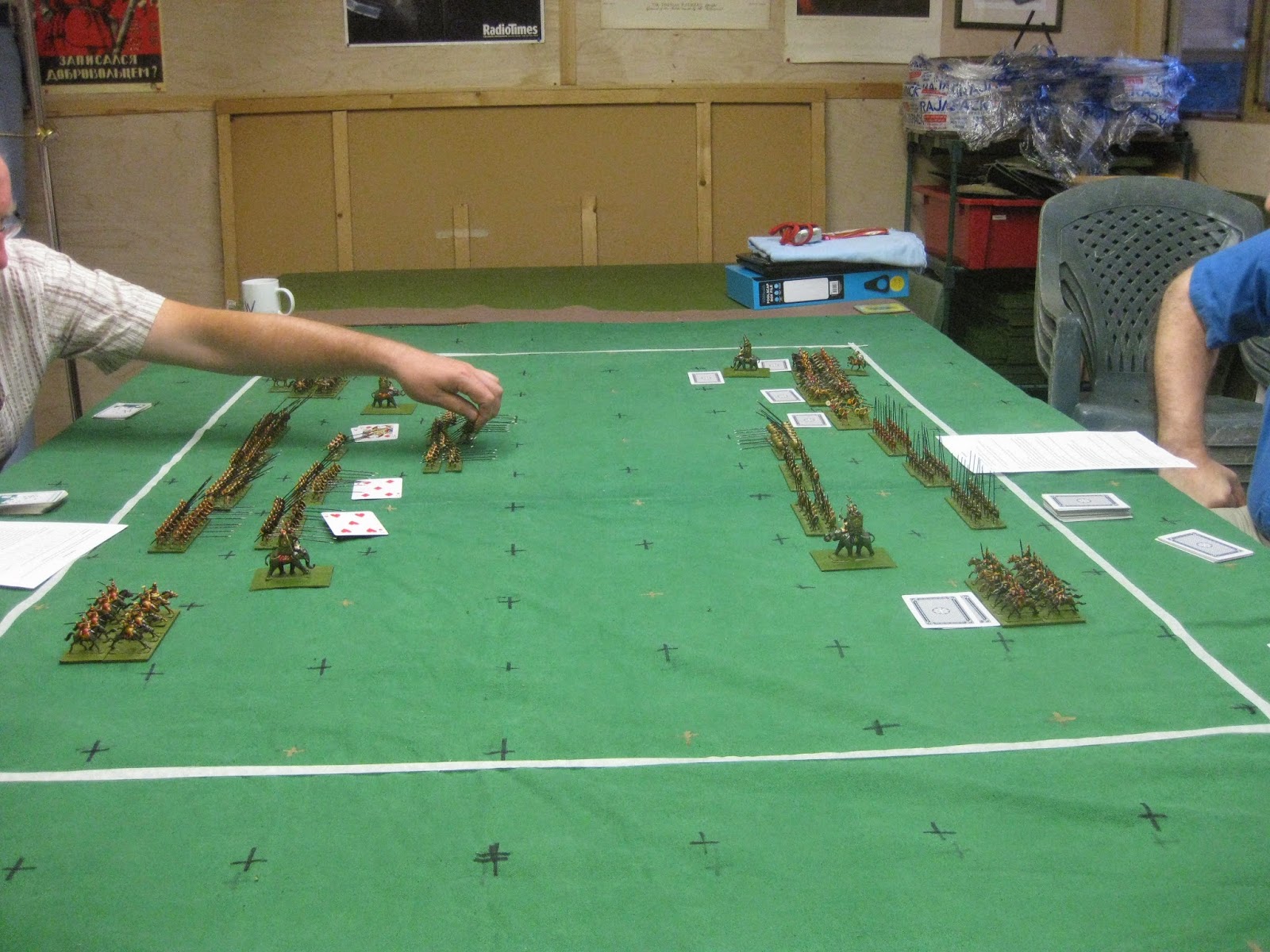 Opening turn. The Ptolemaic phalanx moves forward. Phil has decided to go for a quick win on the flanks as he has a slight superiority in these areas. 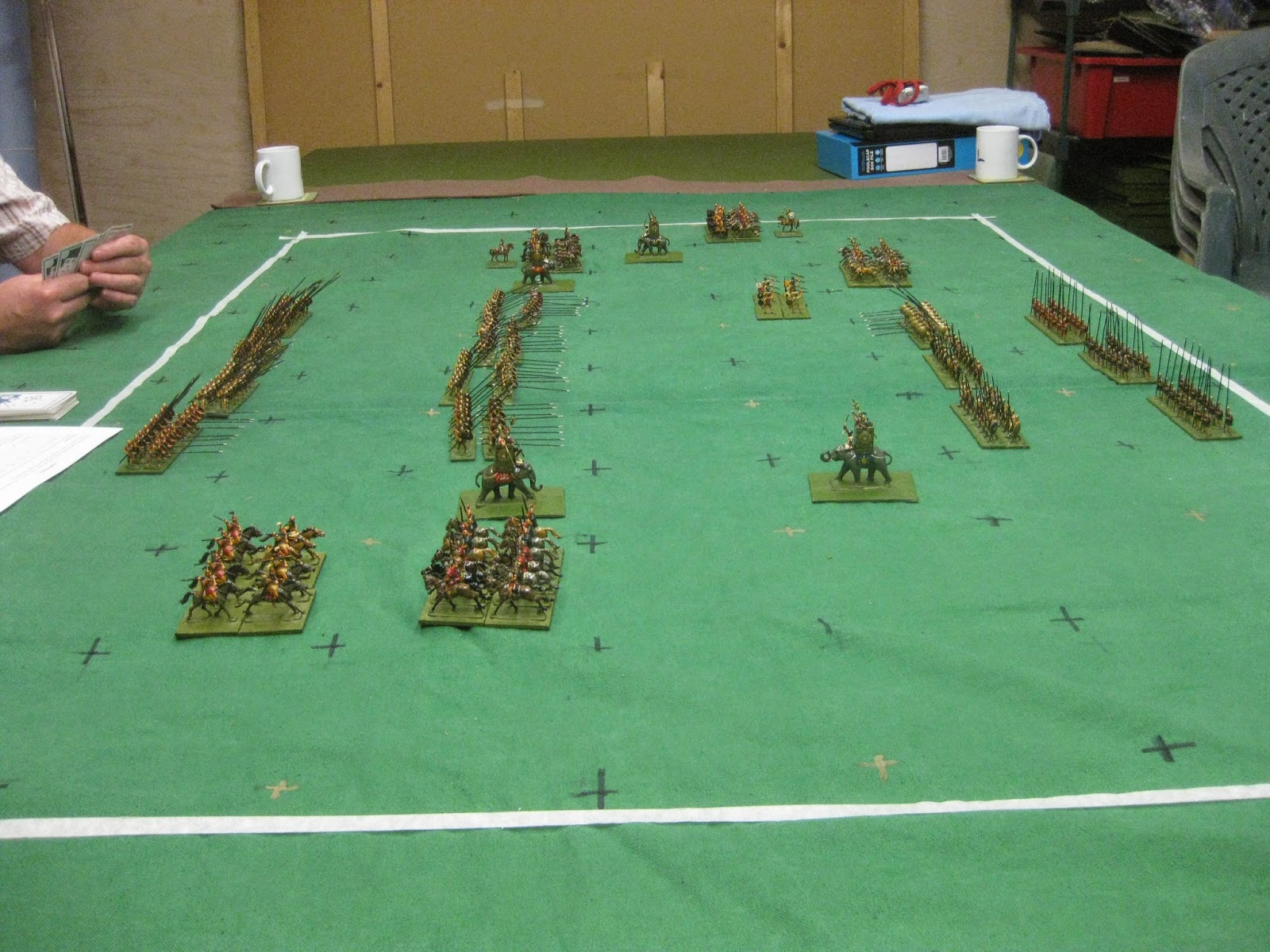 Phil has pushed forward on both flanks, holding his phalanx back 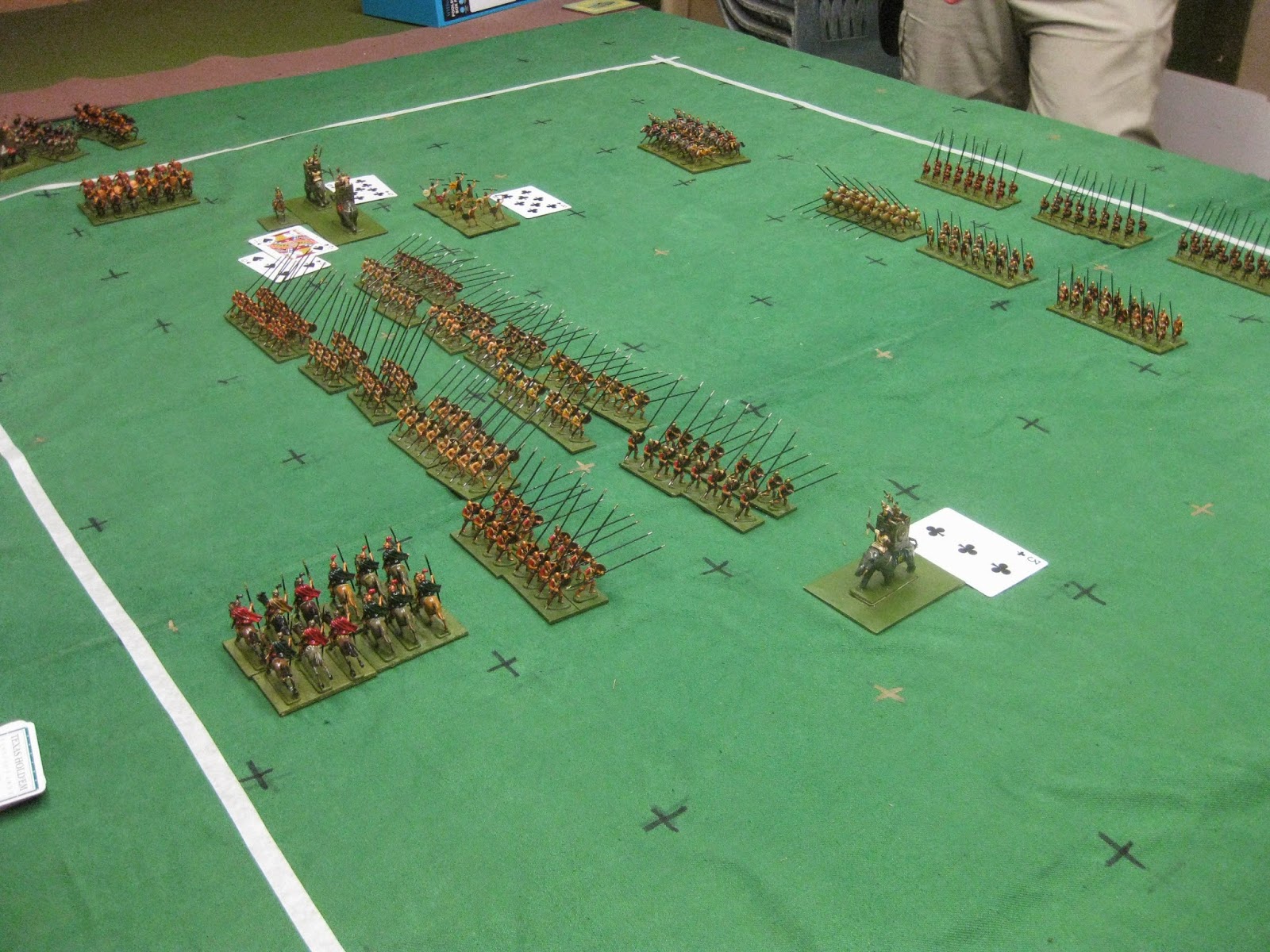 Chris' light cavalry initialled evaded and then got trapped with no where to go and so got destroyed. On the other flank Phil has done very will, removing an elephant and  the opposing cavalry. Ptolemy has got himself killed as well. 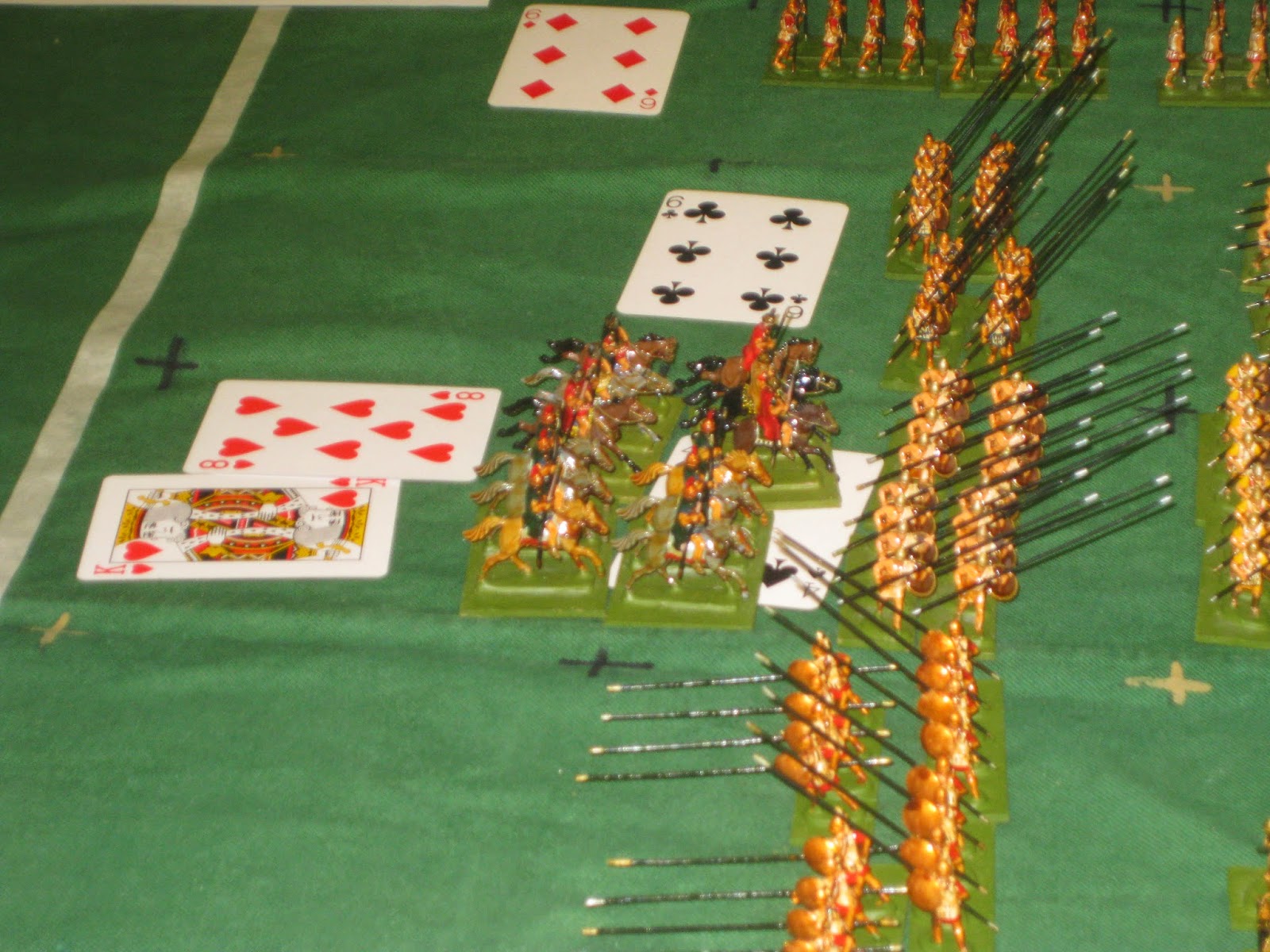 The Seleucid cavalry have now looped round the back of the phalanx and charged it in the rear, breaking another unit. Ptolemy's men are now down about 5 units, so on the verge of defeat. However, Antiochus is running out of cards. If Chris can hold on he can get a draw by forcing Phil to withdraw. 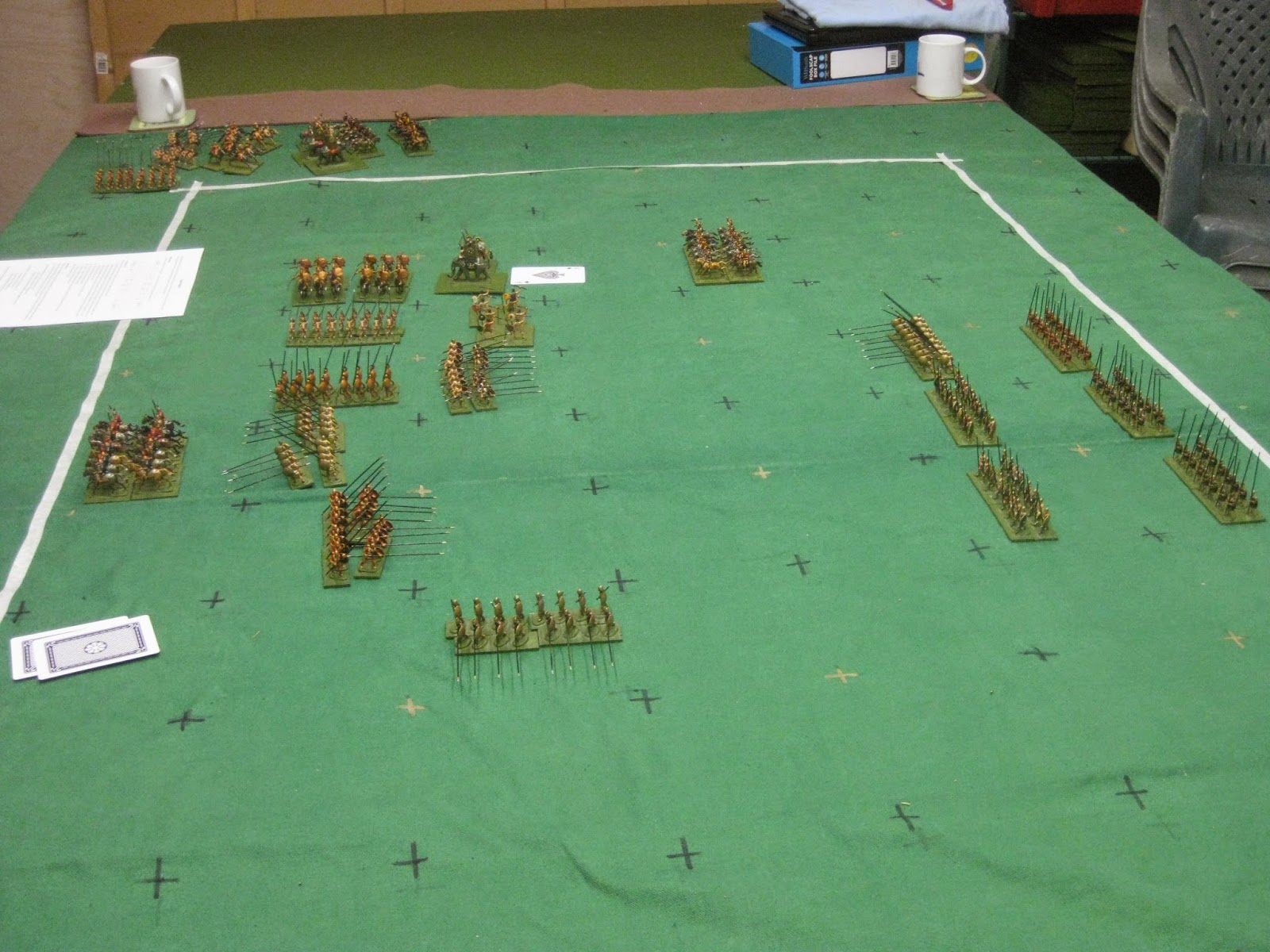 However he went all out to inflict some pain and blew his remaining cards so both players ran out at the same time. With another unit going down, Chris lost.

As no game survives contact with the players, these changes/clarifications were made:

1) Players get one shuffle and re-deal at the start of the game if they don't like their first hand.
2) Both players now move before combat is resolved.
3) Heavy infantry may not move and change face.
4) Heavy cavalry playing black cards to move must go straight forward with no change of face.
5) Elephants do not have flanks unless they are pinned fighting to their front
6) General cannot be attached to elephant units
7) If forced to retire into friends they can only retire if they have the same facing. If they can't retire they are destroyed.
8) Heavy infantry with only one card and it is black still add half of the value, rounded up v cavalry & elephants.
9) Evading units must move directly away from the line of attack without turning.
10) The General counts as a unit for victory conditions.
11) After a General is killed the other player turns over the top card of his deck. If it is higher than the number of units left (counting J=11, Q=12, K=13, Joker = 0) the army breaks.

Any comments and any feedback on other try-outs of the system welcome.

(We discussed increasing the applicability of the rules, - perhaps a "Hasty Hydaspes" may emerge, for example)
Posted by Trebian at 14:14