Mrs T & I agree on many things. However, she doesn't really wargame and I don't find Wimbledon riveting. So, this afternoon whilst Mrs T was catching up with Roger Federer et al I sneaked off to Shedquarters to try out some of my newer figures.

I'm painting up Medes & Persians mainly to take on my Assyrians but you can't pass up on the classic match up that is early Achaemenids v early Greek hoplites.

This is a core Classical period game and so any set of rules should deal with it capably. In the case of AMW there's not a lot of skill as both armies line up against each other, but it is quite tense. The Hoplites are very much superior in hand to hand to the Persian infantry, even the Immortals, but the relative bow range and move distances make for a tense approach. The Greeks have to put their heads down and run at the Persians, but they'll take three rounds of archeryanyway. That should inflict about 3 hits, - one shy of killing a base. Hoplite units down a base lose a lot of their advantages (but not all) and once the Persian cavalry has cleared the wings they can assist the infantry in grinding down the hoplites, hopefully before they all die. 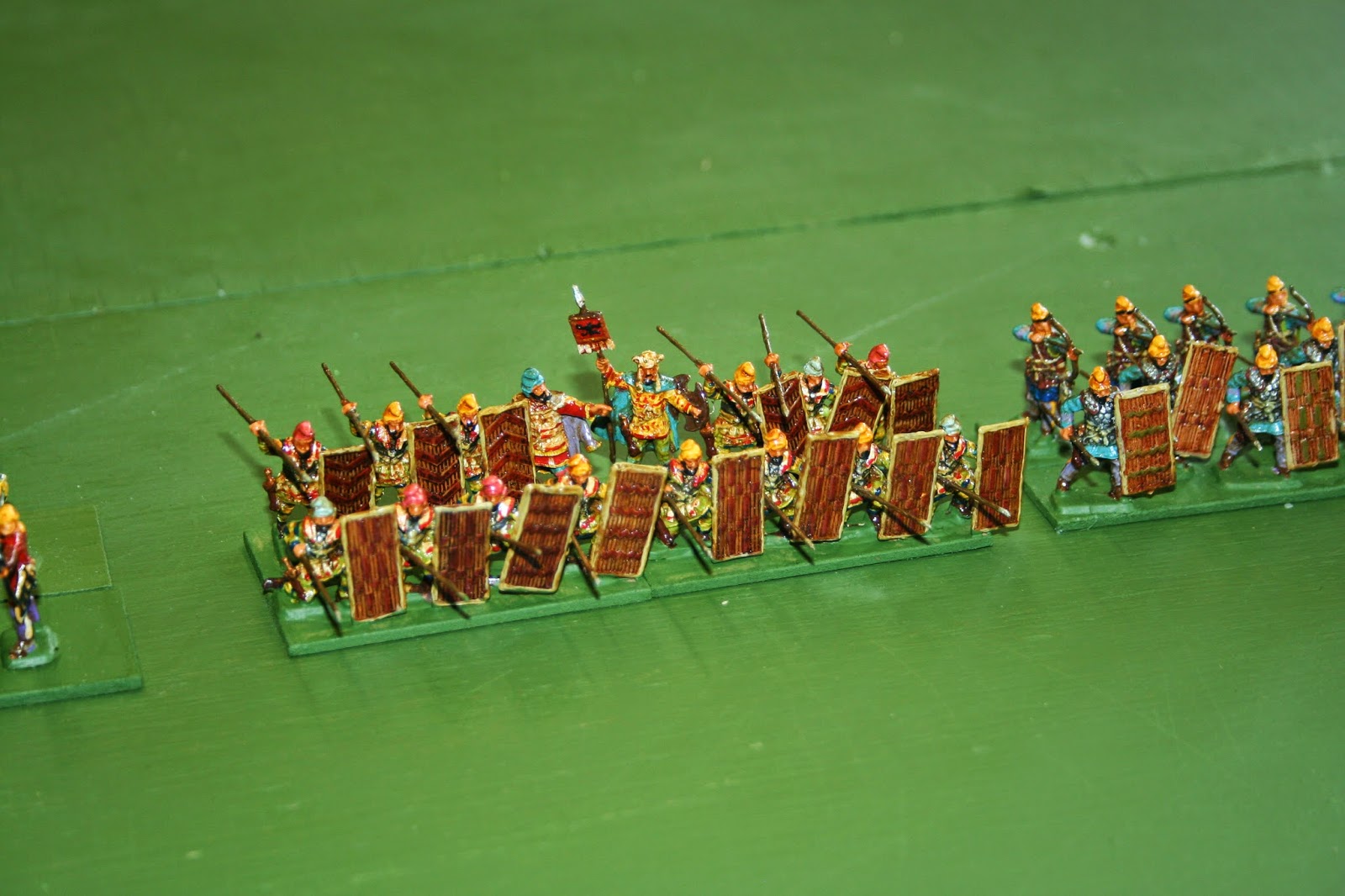 Here's a close up of the Persian infantry doing duty as Immortals. The figures are Zvezda/Italeri, and really rather good. 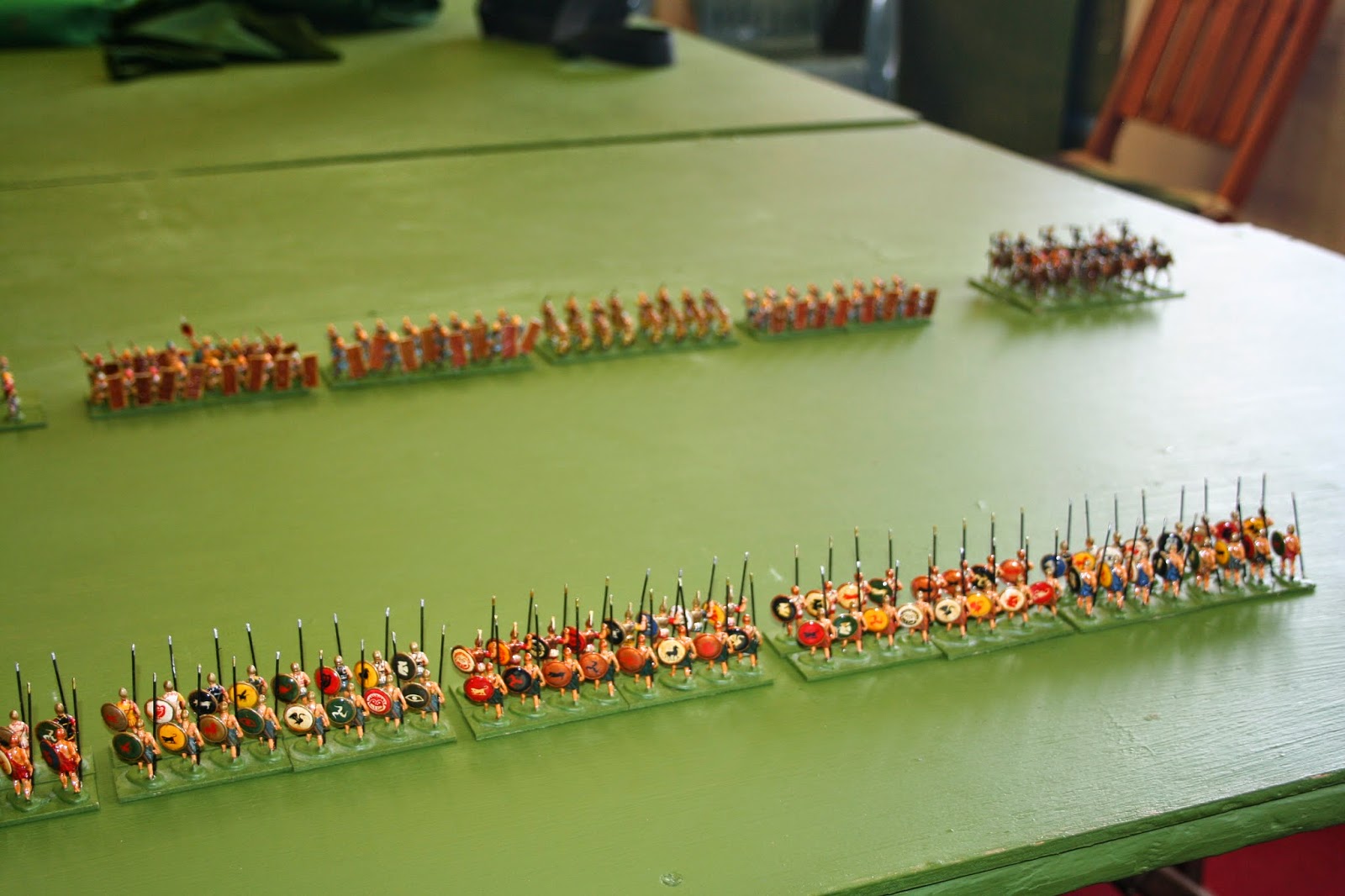 The opposing infantry lines. There's some bow armed Heavy Cavalry out on the Persian left. Neil doesn't allow them to move and shoot, which is a trifle harsh in my opinion. These are the only bow armed Heavy Cavalry in the Classical army lists and I was wondering if it was an over sight, but in the later section he allows similar cavalry to shoot, but only after moving. Light cavalry can shoot before or after movement. 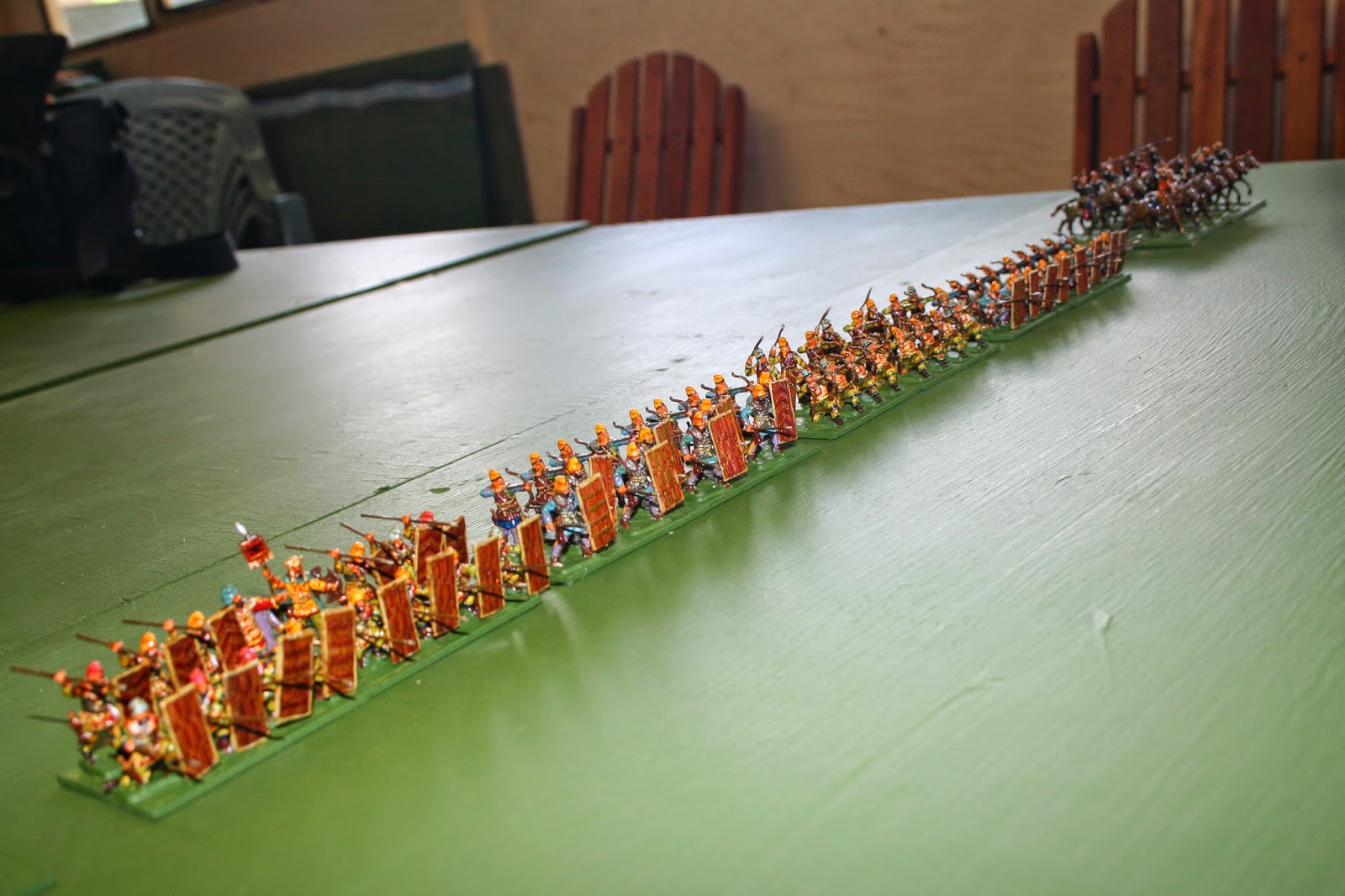 Here's a better picture of the Persian infantry line, waiting as the Hoplites run towards them. 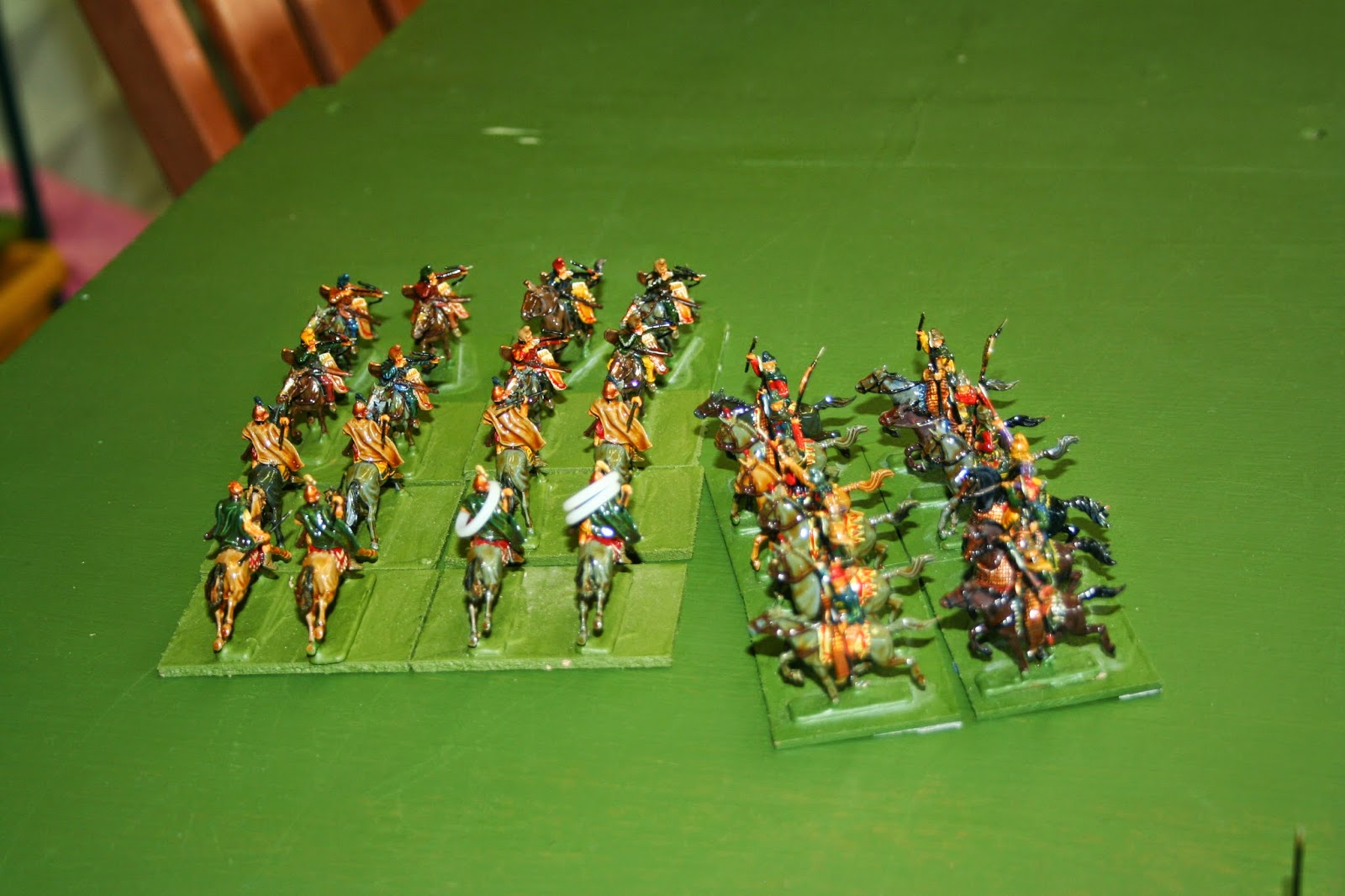 The Greek cavalry on the left got a bit caught by the Persians, and didn't last very long. A turn of hoplites at the left hand end of the line was required to fend off the Persians once this combat was over.. 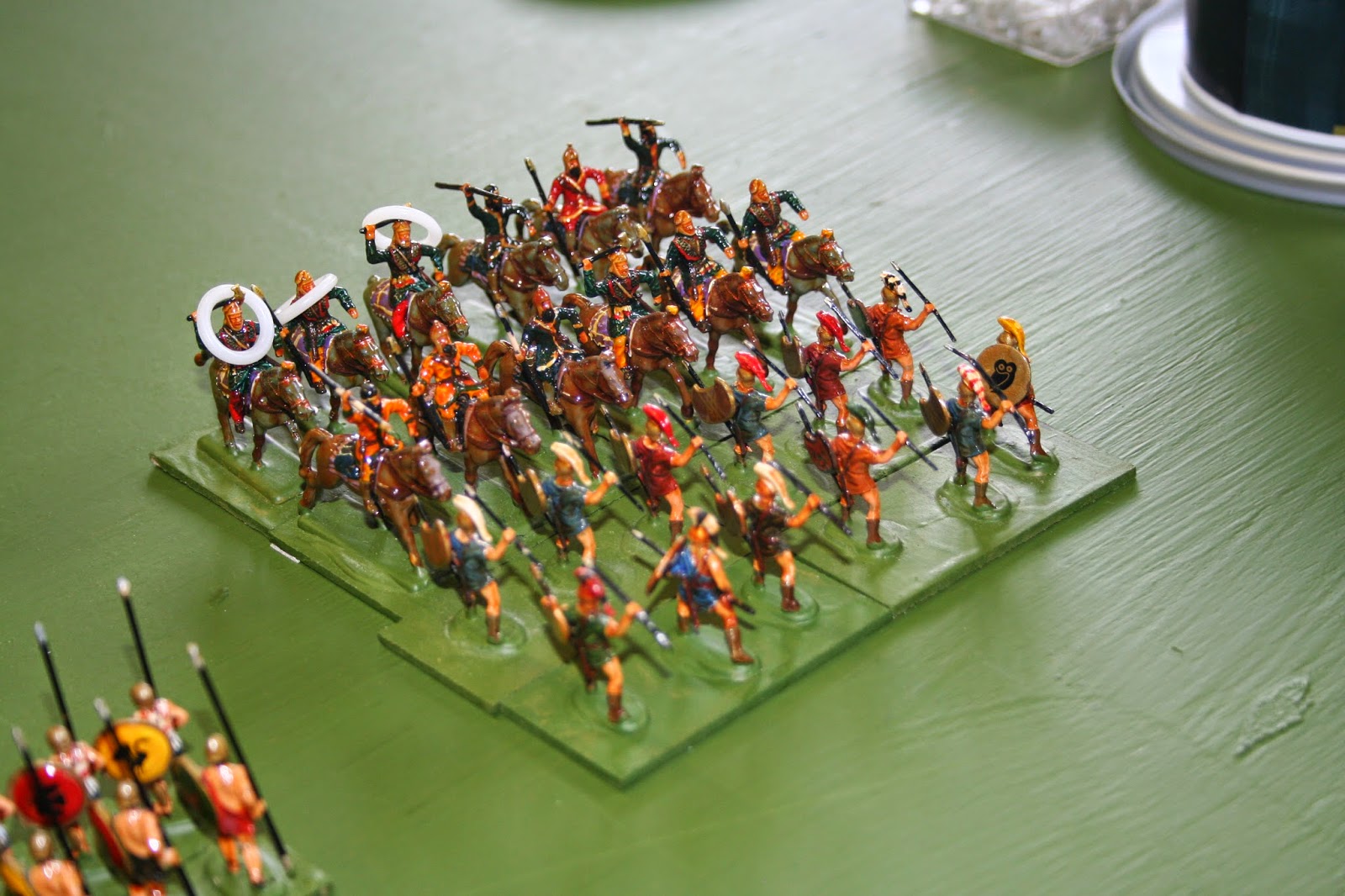 Similarly on the Greek right their light infantry got run down by the Persian heavy cavalry. However, some mean dice rolling did quite a bit of damage and held them up for a move or two longer than expected. What you hope for with the Persians is to win the flanks quickly and then chuck the cavalry into the rear of the hoplites whilst they're fighting the Persian infantry. 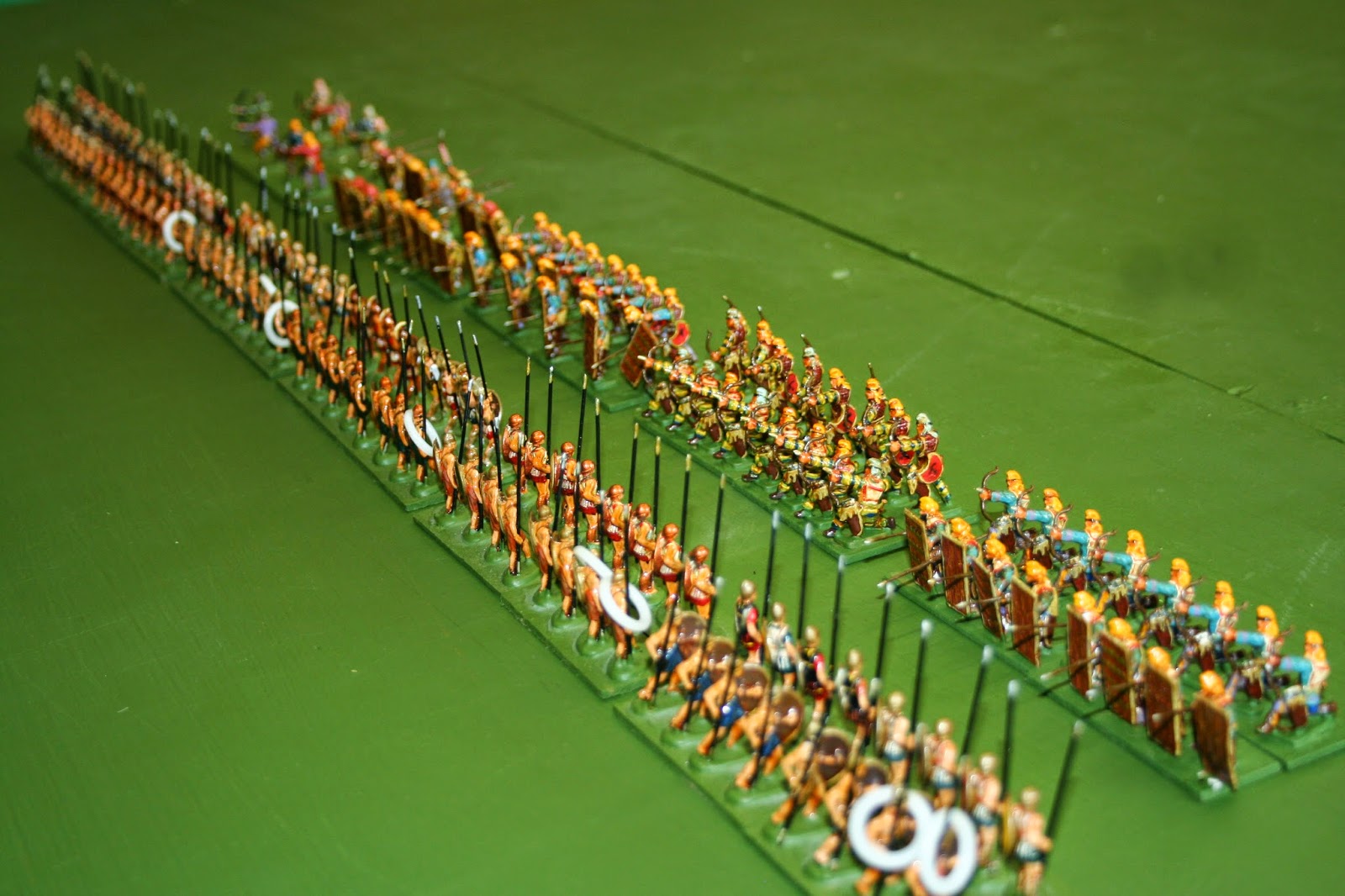 The lines close. The archery has had a small effect all along the line, - but probably not enough. You'd hope at least one unit would have lost a base. 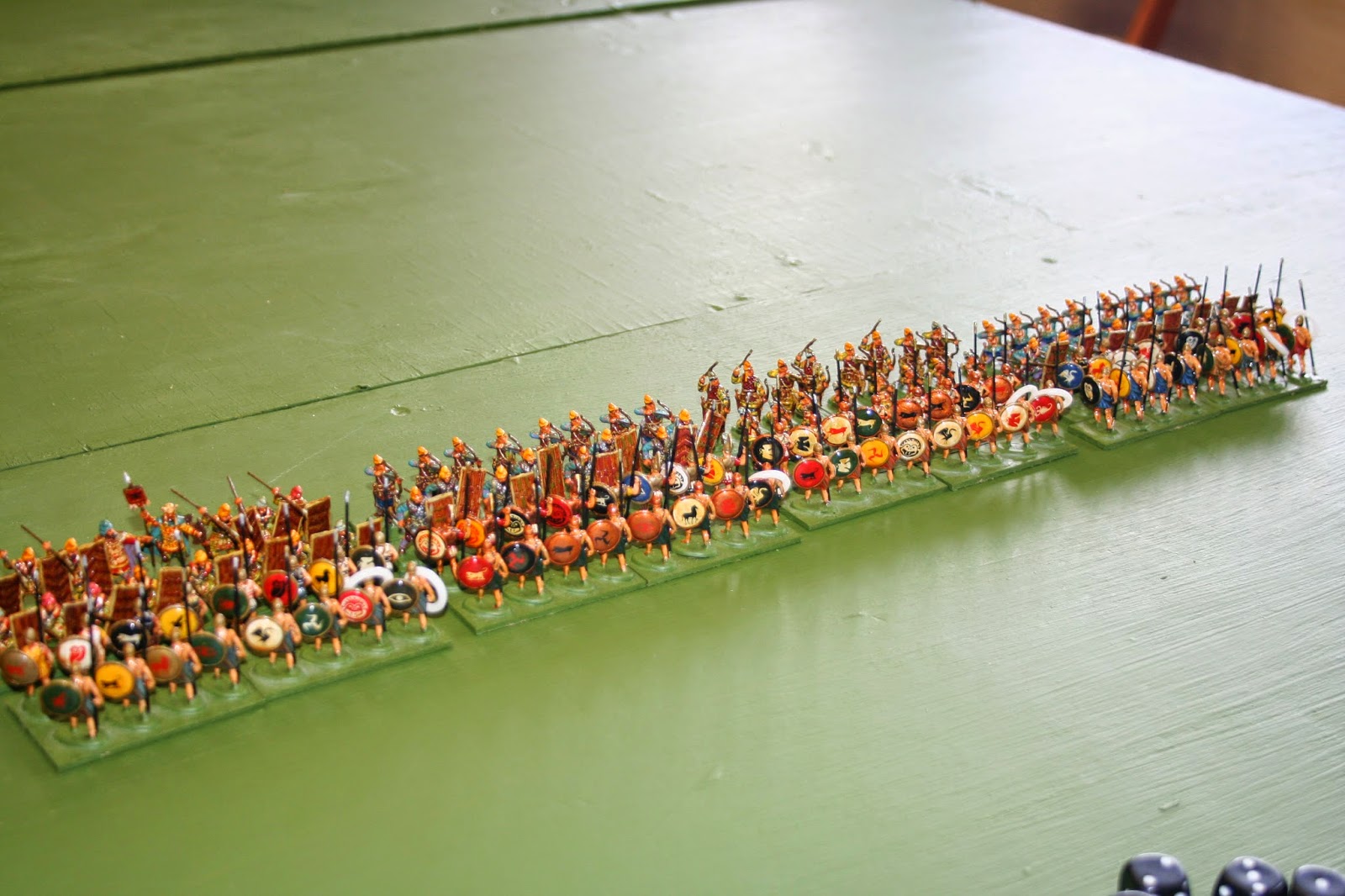 The lines all clash. Just off screen to the left a valiant group of Persian light archers are doing their best to delay some hoplites turning the line. 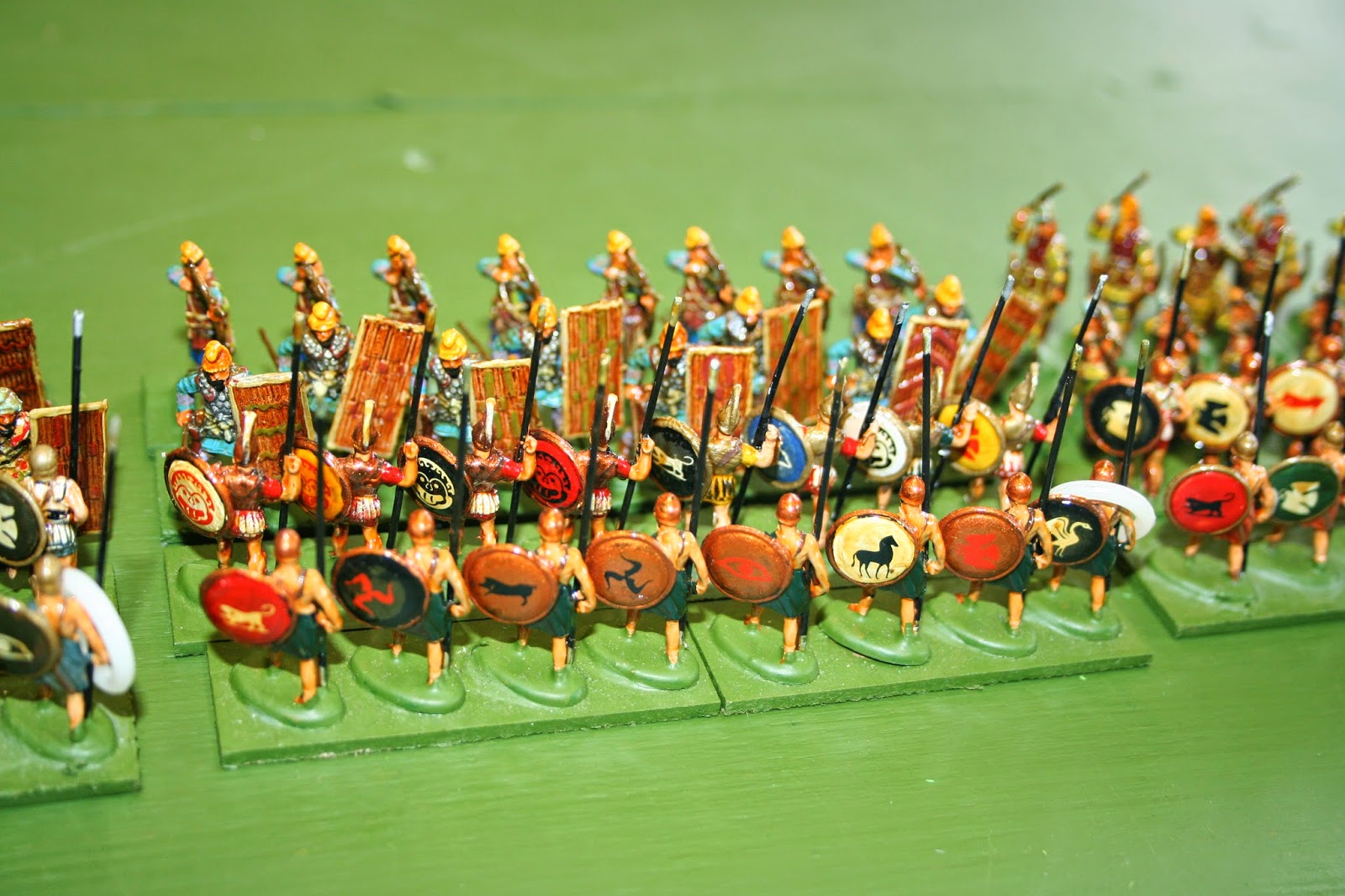 Another close up of the action... 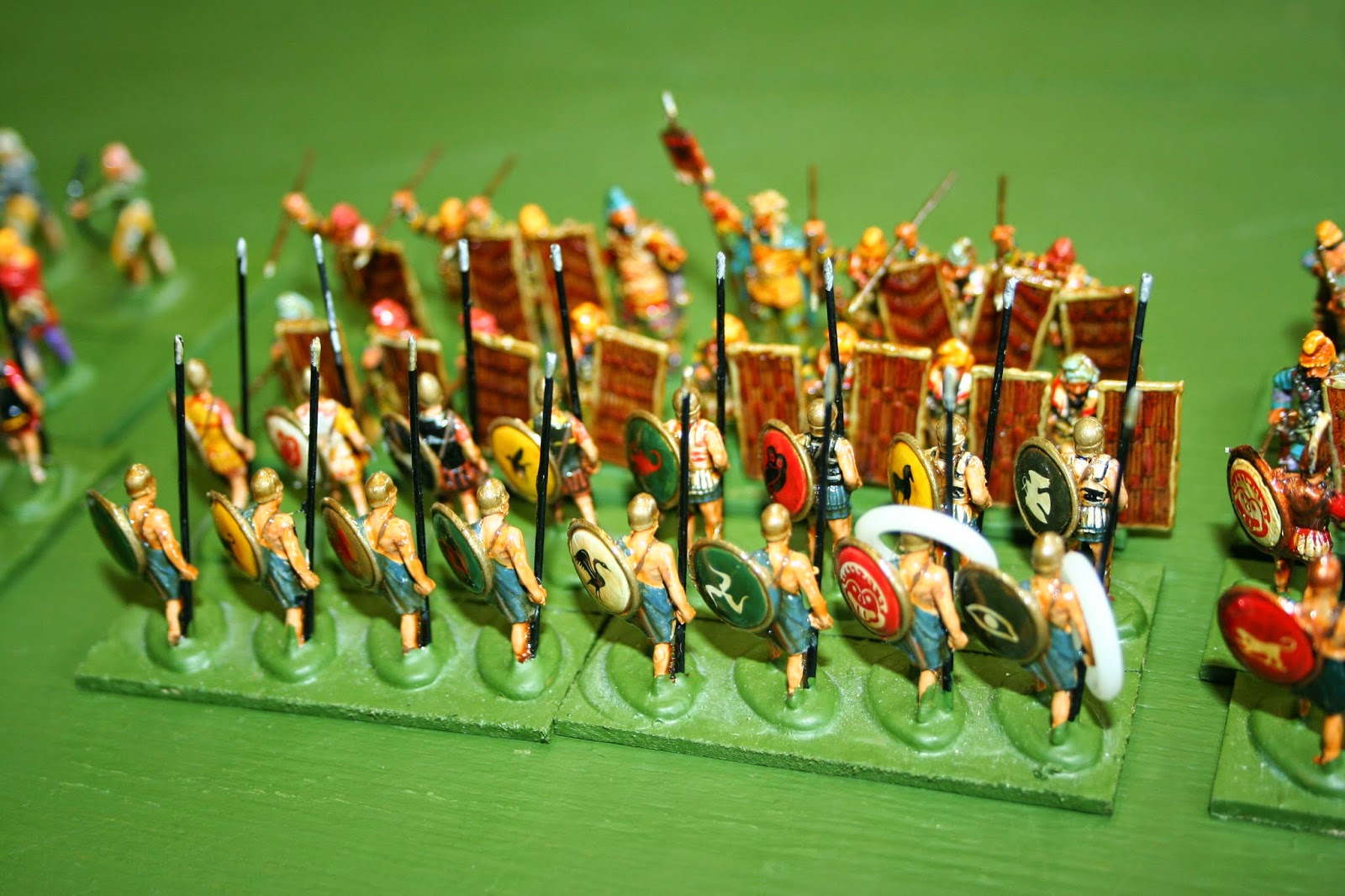 ...and another. BTW I used a playing card activation system for this game to make things a bit less predictable. 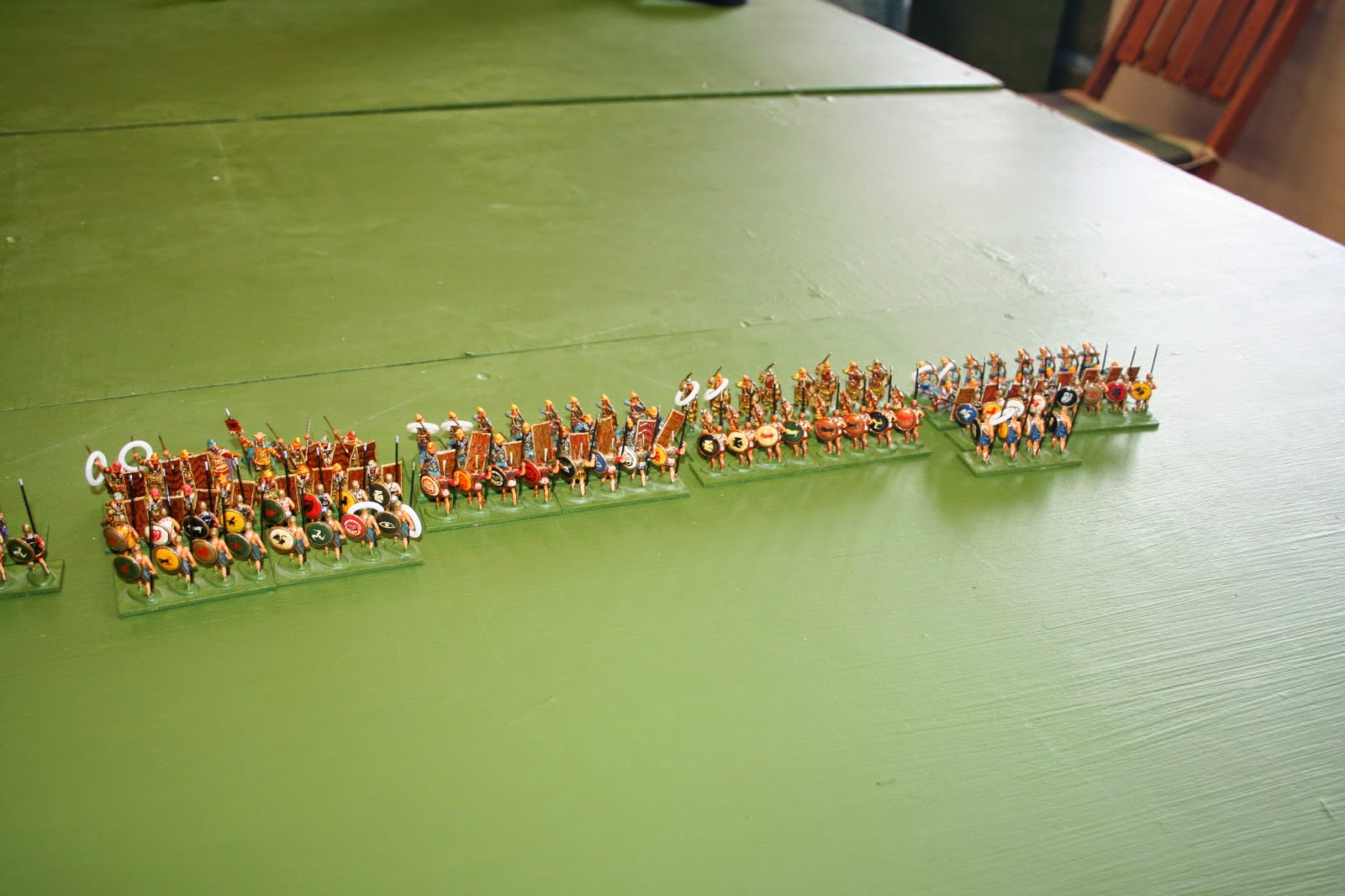 A remarkable sequence of dice rolls lead to the Greeks losing the first round combat pretty much everywhere (except against the Immortals) and also failing subsequent morale checks. Looks a bit dodgy in the middle, doesn't it? 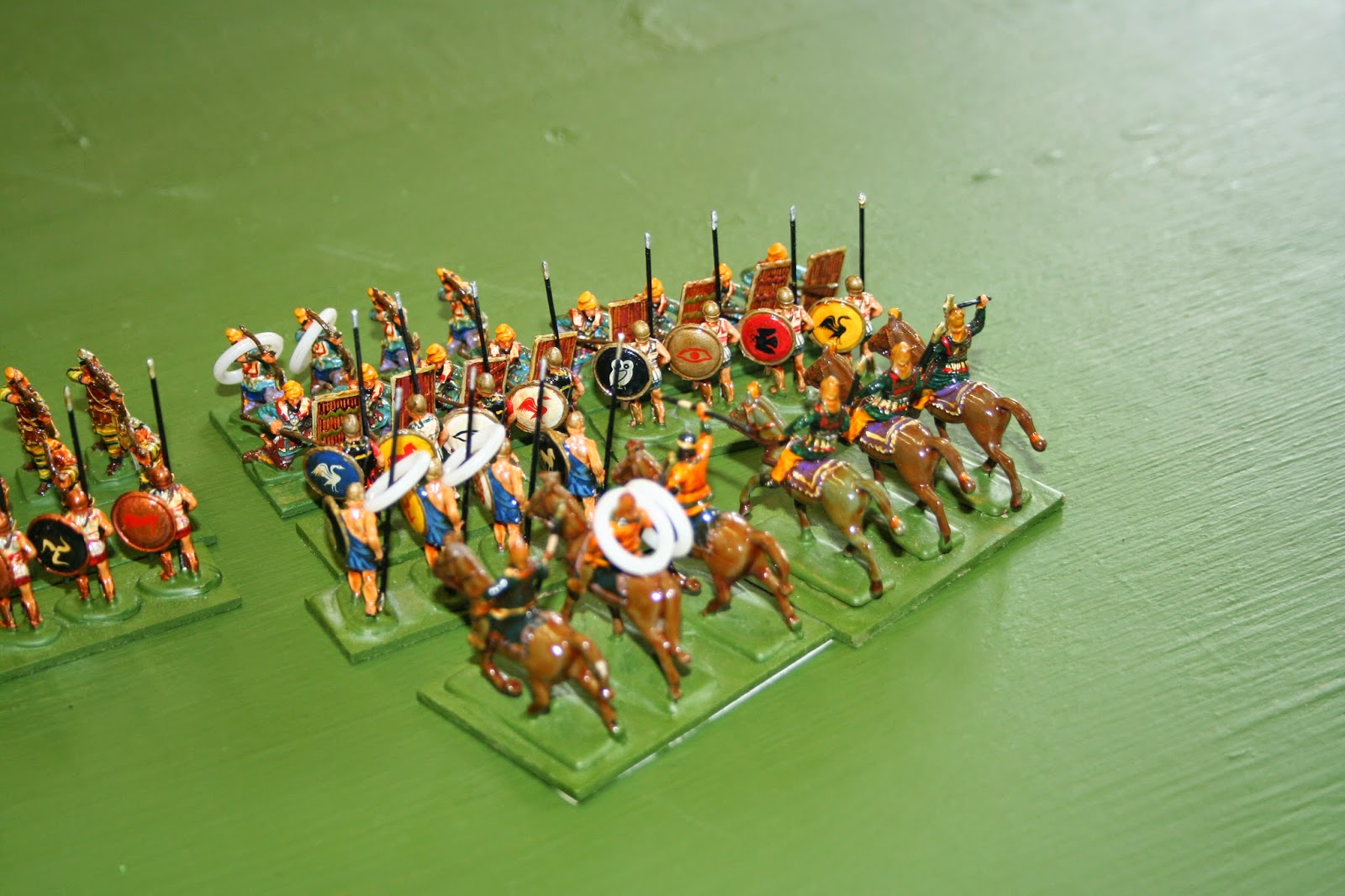 Finally free of those pesky light infantry the Persian left wing cavalry pile into the back of some hoplites. 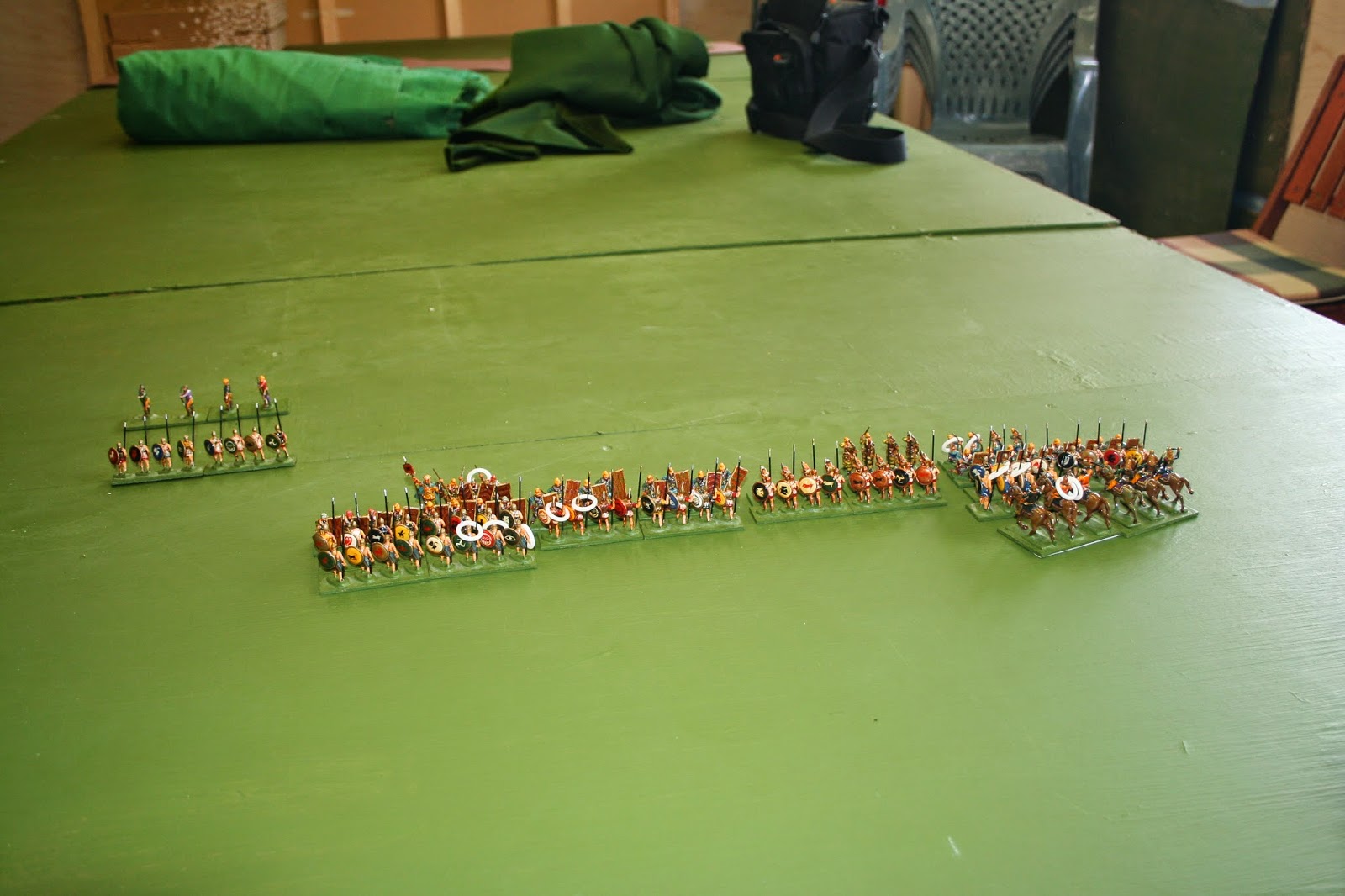 As you can see the right of the Persian line has gone, and the light infantry are retiring away from the hoplites facing them. Their archery was singularly useless throughout the entire game, not inflicting a single hit.. 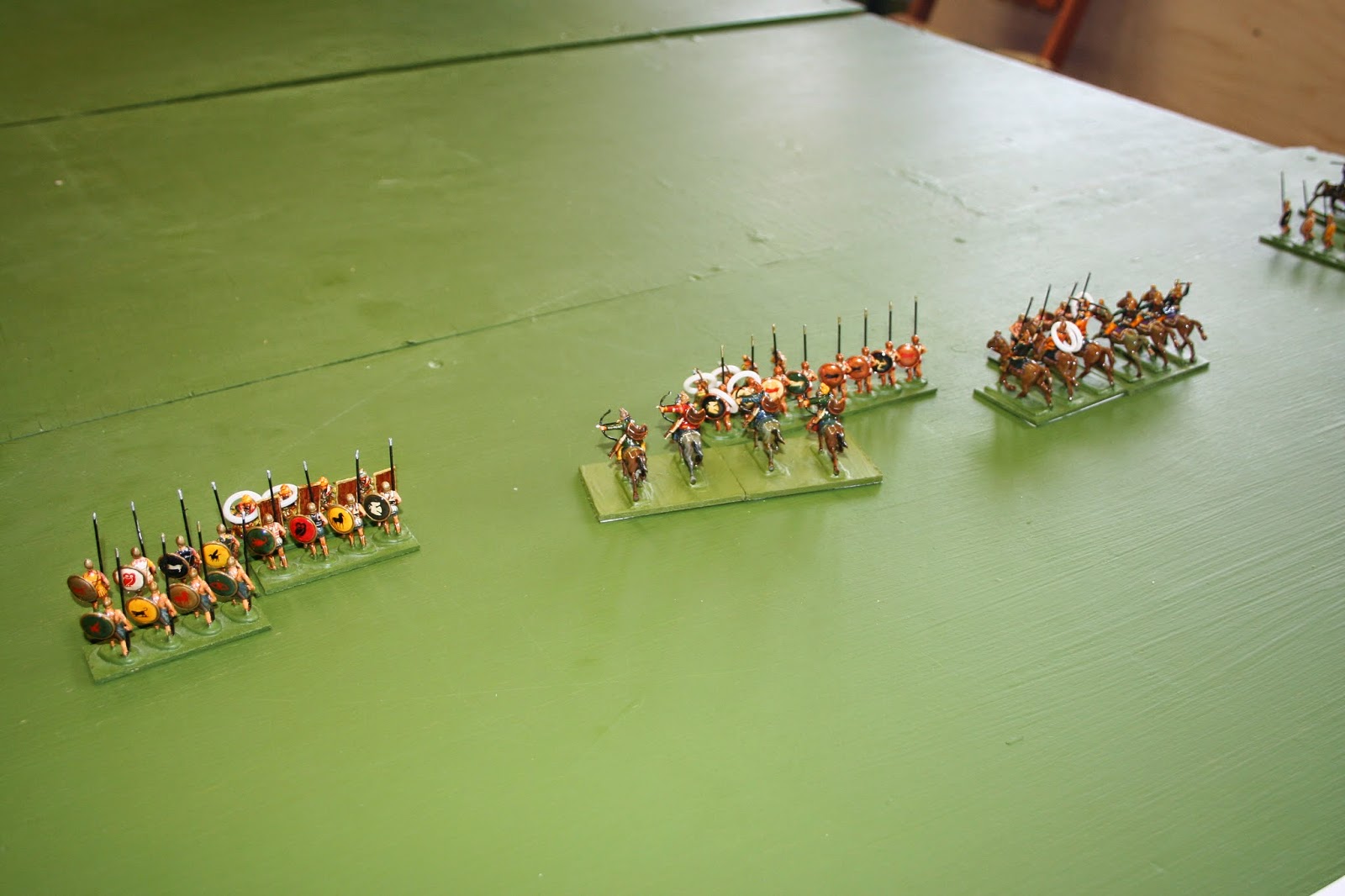 Despite a good start the Persian infantry can't sustain it. Even when they kill a base, and even taking into account their big shields, the Greeks are still rolling more dice and getting better saving rolls. 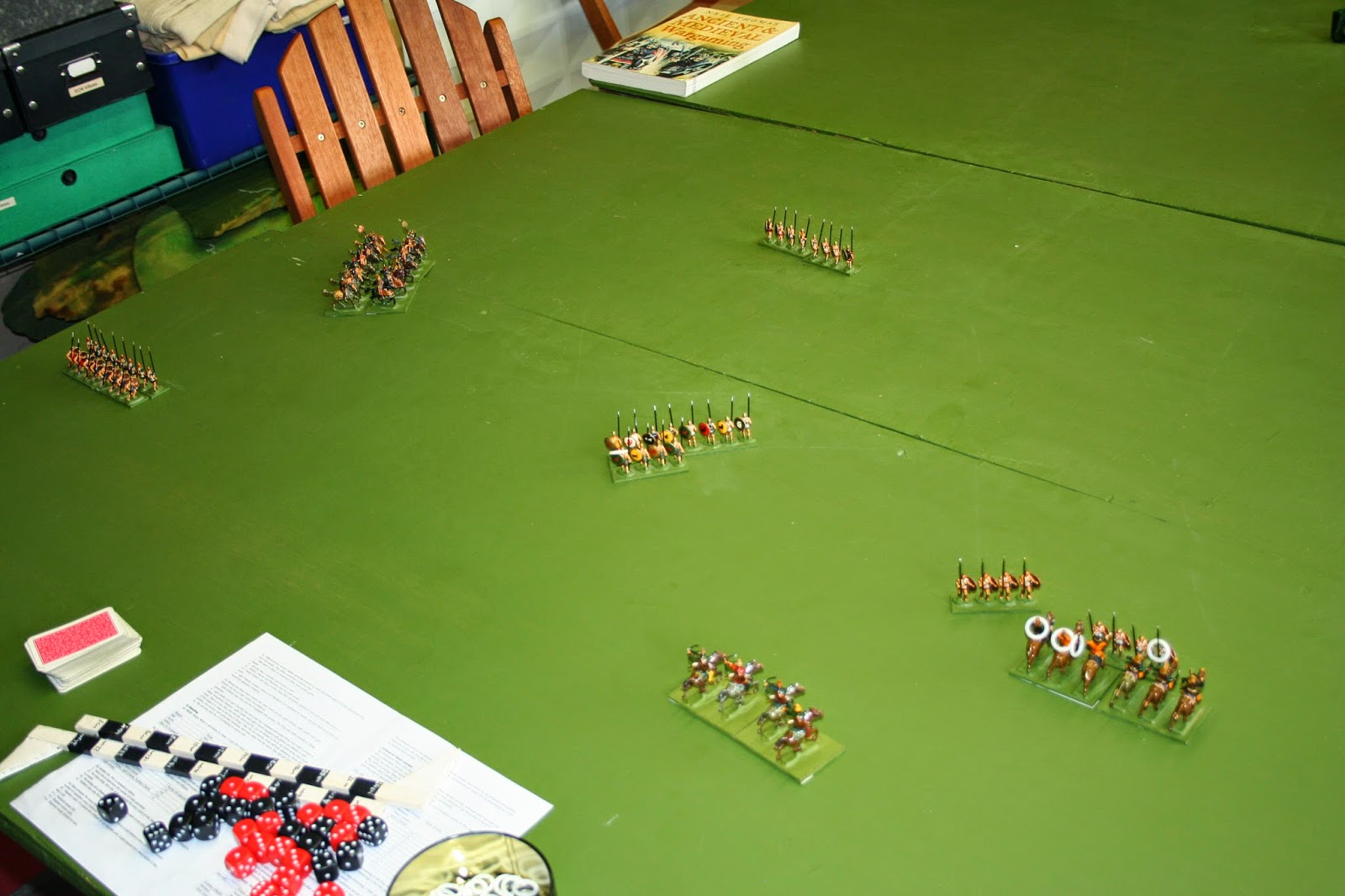 And then it's all over, with some hoplites marching off to loot the camp.

Well, it passed a pleasant hour or so (interrupted to do some gardening Mrs T has started but couldn't finish). The Persians need to be really lucky to win the basic game, and not letting the Persian heavy cavalry move and shoot is a bit of an issue.

Good to get the new toys out on the table, however.
Posted by Trebian at 17:12