There's been a recent TMP thread about who would win if you matched Hannibal's army from Cannae against Alexander's from Gaugamela.

Such conversations are essentially sterile; there's over a 100 years between them and circumstances and tactics change for a start. One was a head of state, the other wasn't etc, etc. We can only know what happens within a given period. Elite status, for example, is a comparative evaluation. Are Alexander's elite only as good as Hannibal's average troops for example.

Anyway I had some free time on Friday and I have enough figures for the armies (refought both battle in the past). I had Lost Battles and AMW to hand, - so why not try it out? After all, it looked like rain, so I couldn't really do any gardening.

I used AMW with the rule tweaks for Generals and Elites from the previous blog about Paraitakene. I took the numbers from Lost Battles, and adjusted them in proportion so there was an even number of units aside. I set the table up as Cannae as Sabin argues convincingly that there's no completely open flanks on either side. It's also Hannibal's masterpiece, and I thought he might need a hand. I tried to follow the opposing Generals' opening plans until they no longer seemed to make sense. 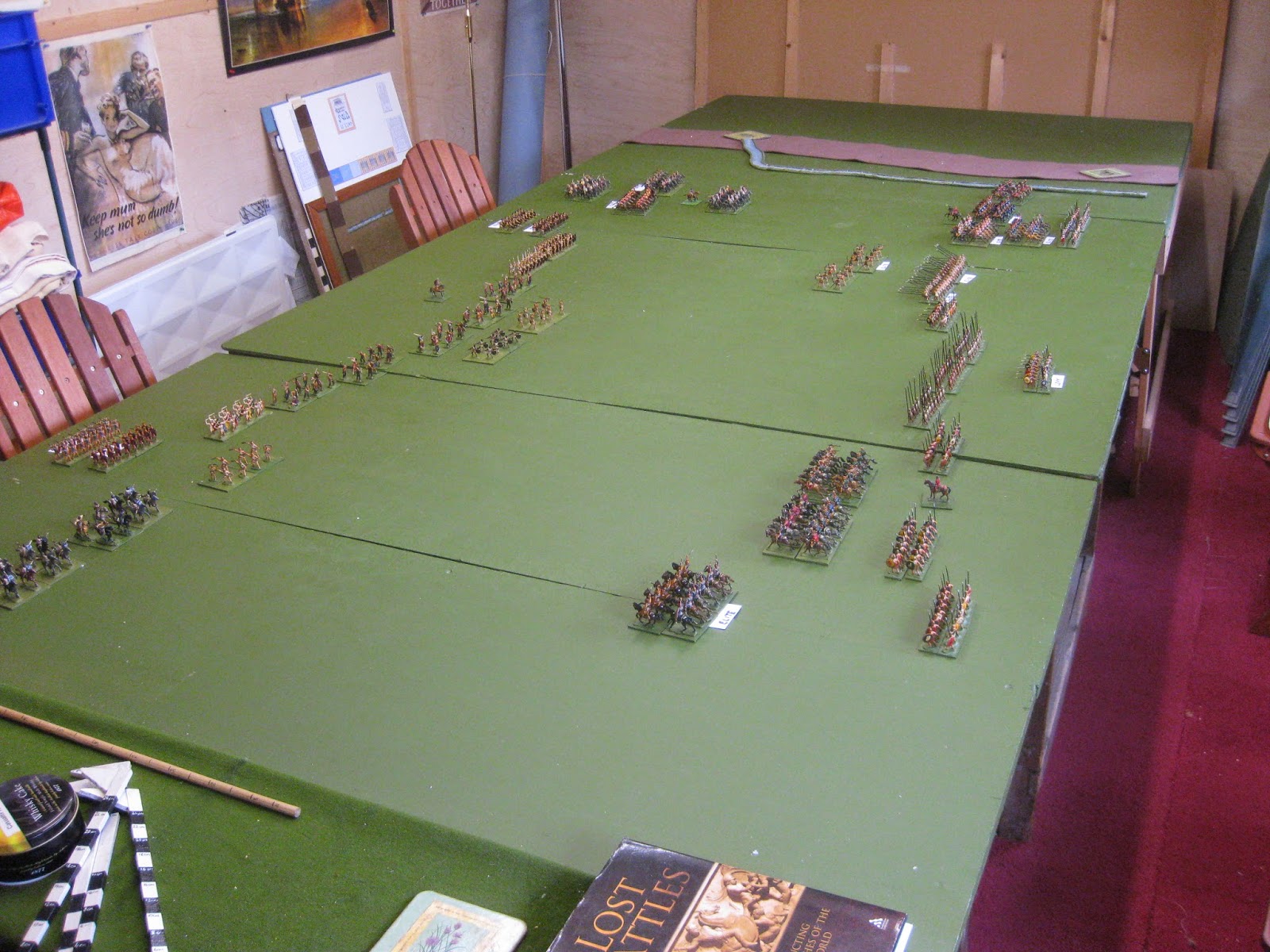 The set up. Hannibal to the left, Alexander to the right. 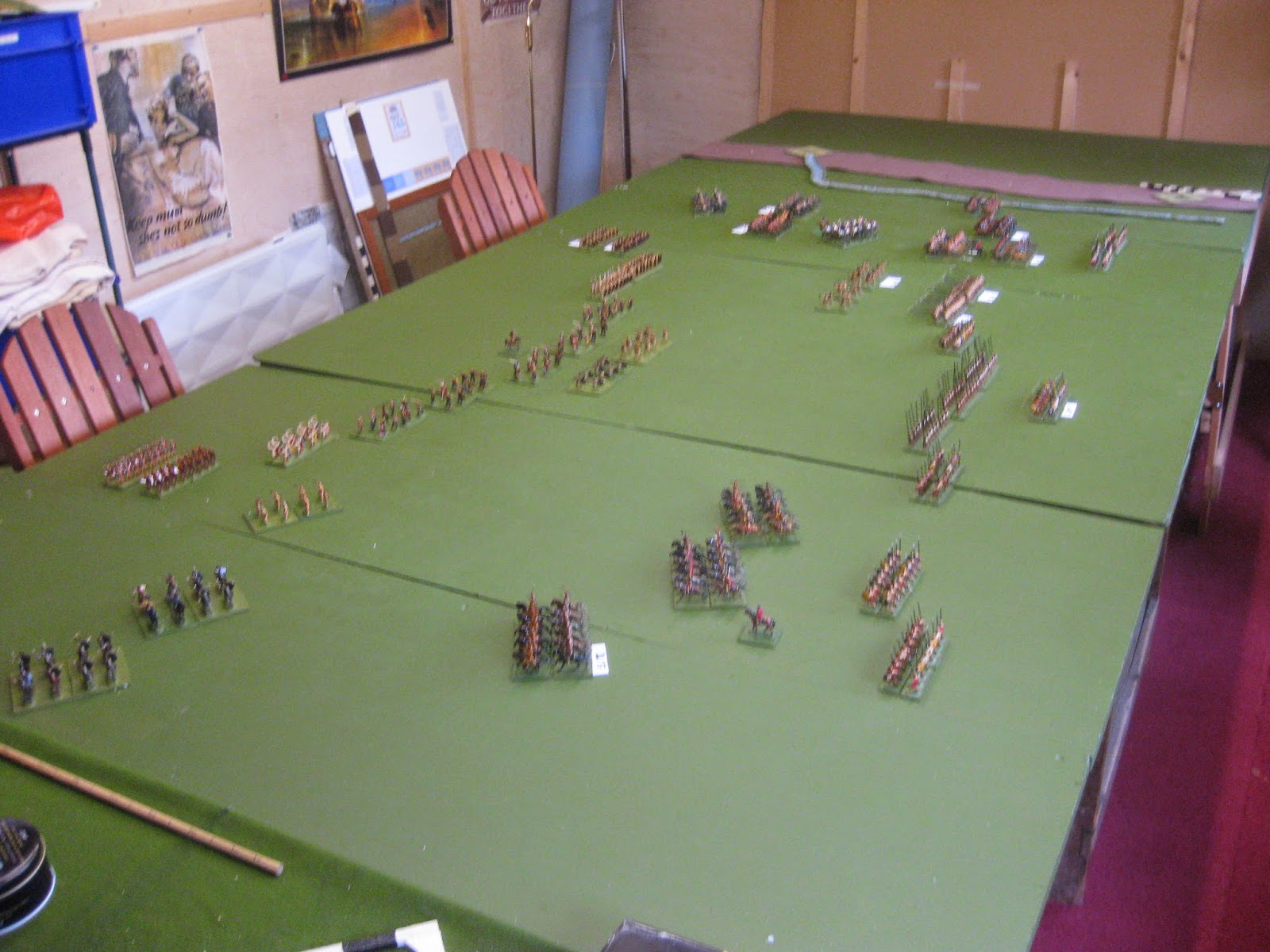 Opening turns. With Hannibal's Numidian Cavalry going out wide, nearest the camera, Parmenio has to react similarly to avoid being encircled, rather than just refusing the flank. The presence of the supporting infantry out on the flank means there's depth in the position to enable this to happen. 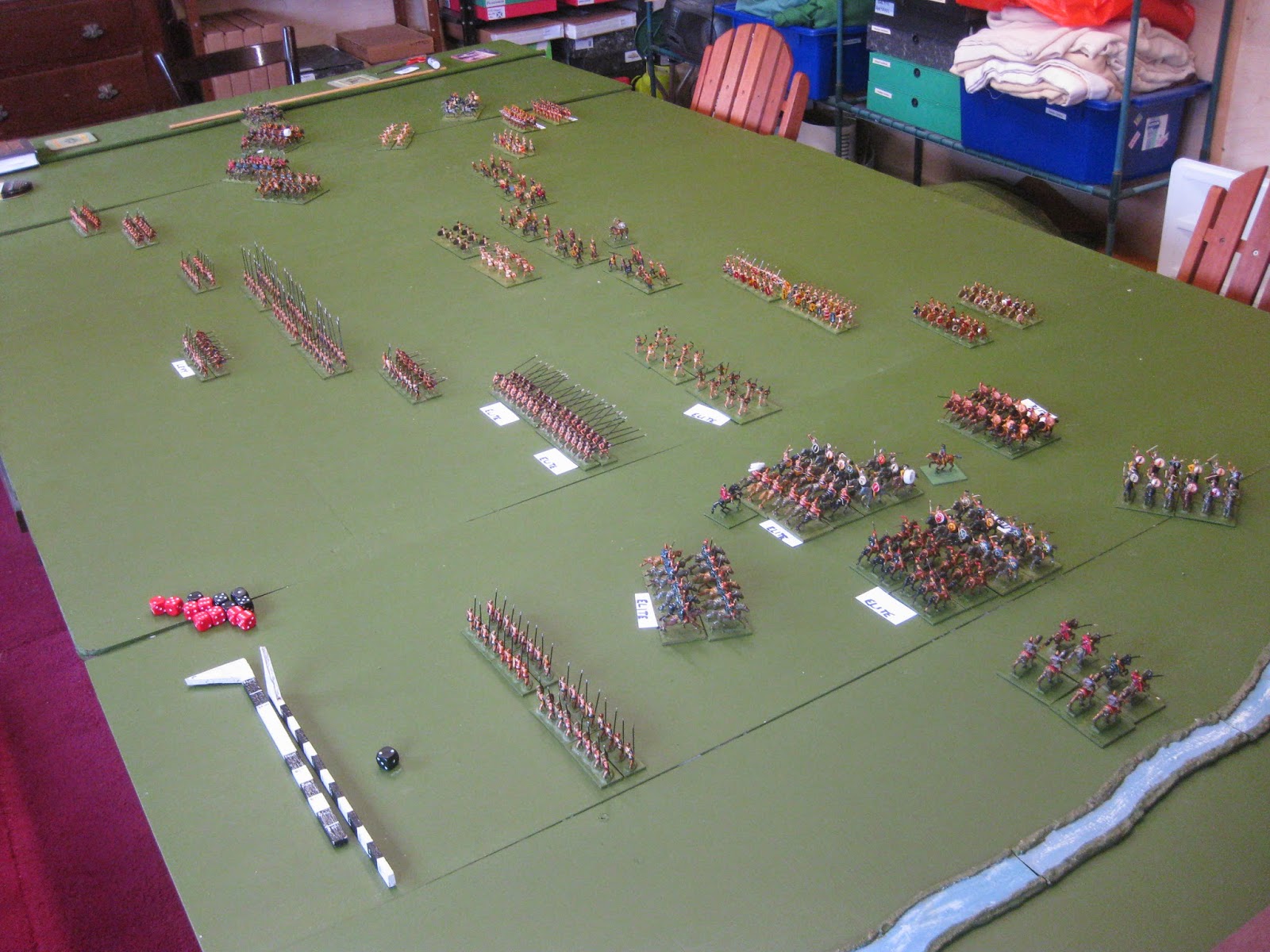 On the other flank Alexander and Hasdrubal have not wasted any time in getting down to it. Hasdrubal has an advantage in volume of heavy cavalry over here, but Alexander has his Prodomoi to give him flexibility. Plus he has his Companions, who I rate as the best cavalry on the board, and he's leading them too. 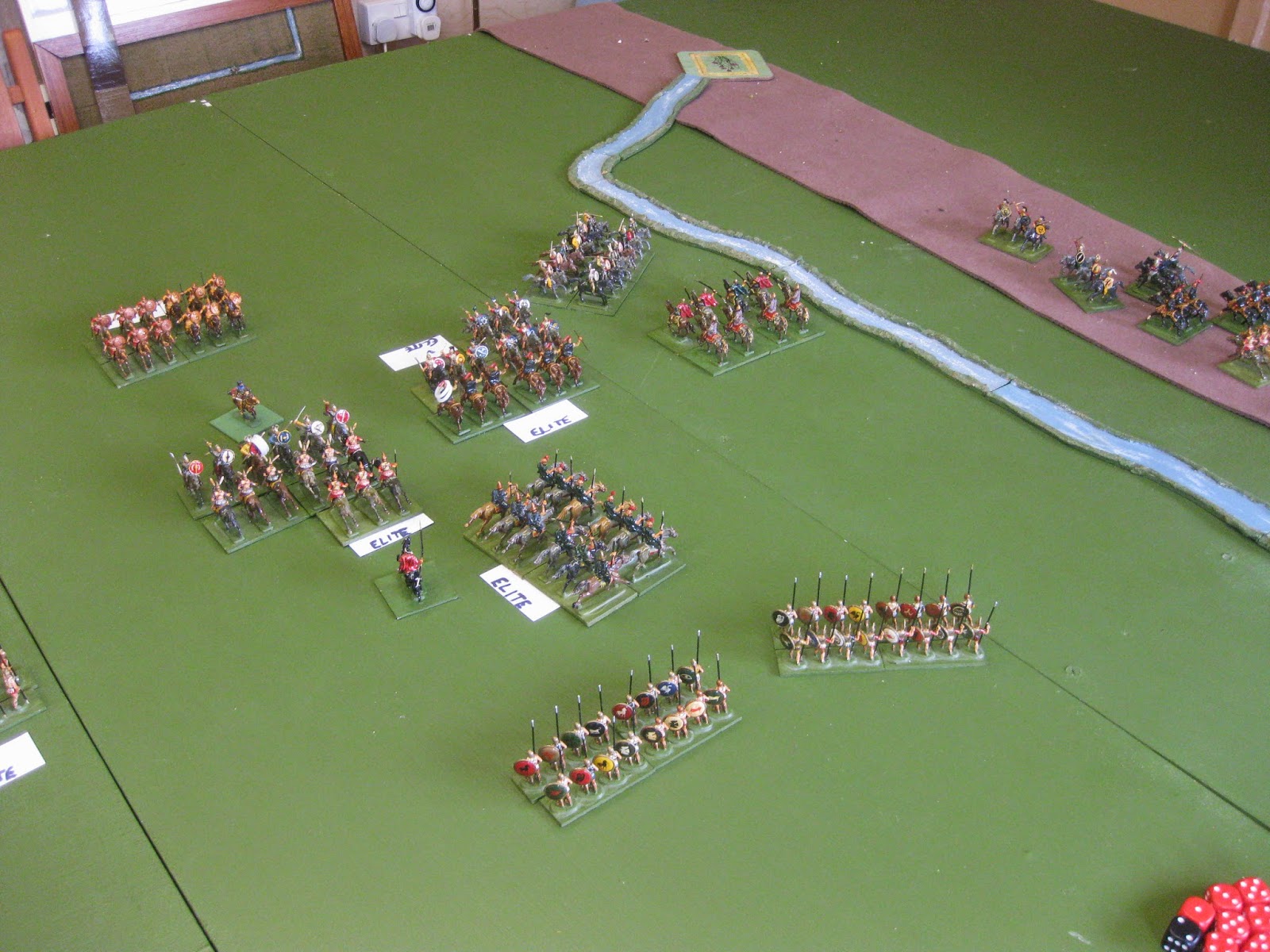 Hasdrubal's cavalry take a pounding, but Alexander has lost a base as well. Alexander has to commit his reserve cavalry line to cover the Carthaginian heavies coming up along side the river. The supporting hoplites on this flank are moved up to cover any breakthrough in the centre. 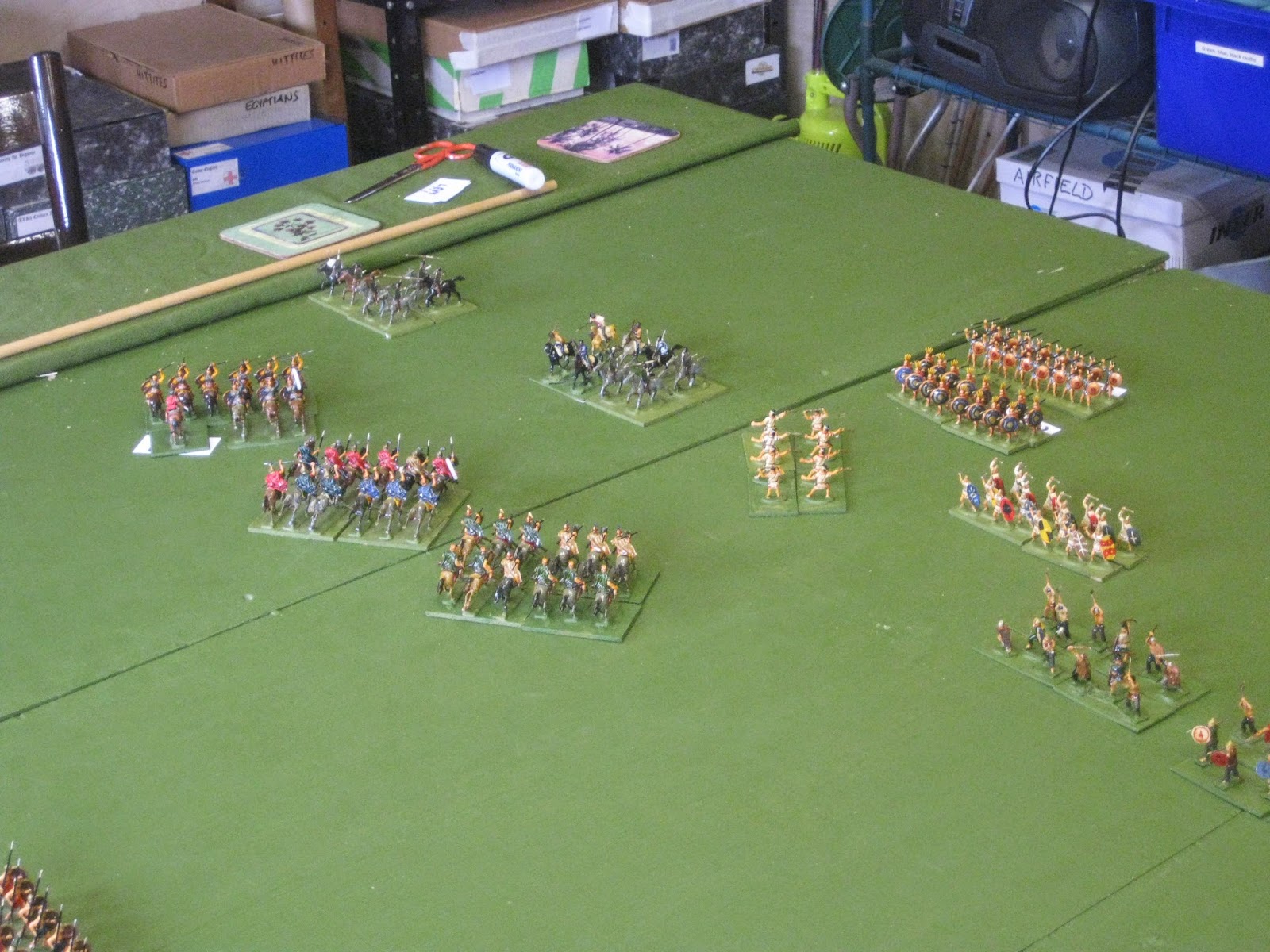 The Numidians' skirmishing has taken a base off Parmeio's horse, but they have to retire in the face of the heavier cavalry. The presence of the Cretan slingers should slow up the Macedonians, however, and provide cover to the infantry. 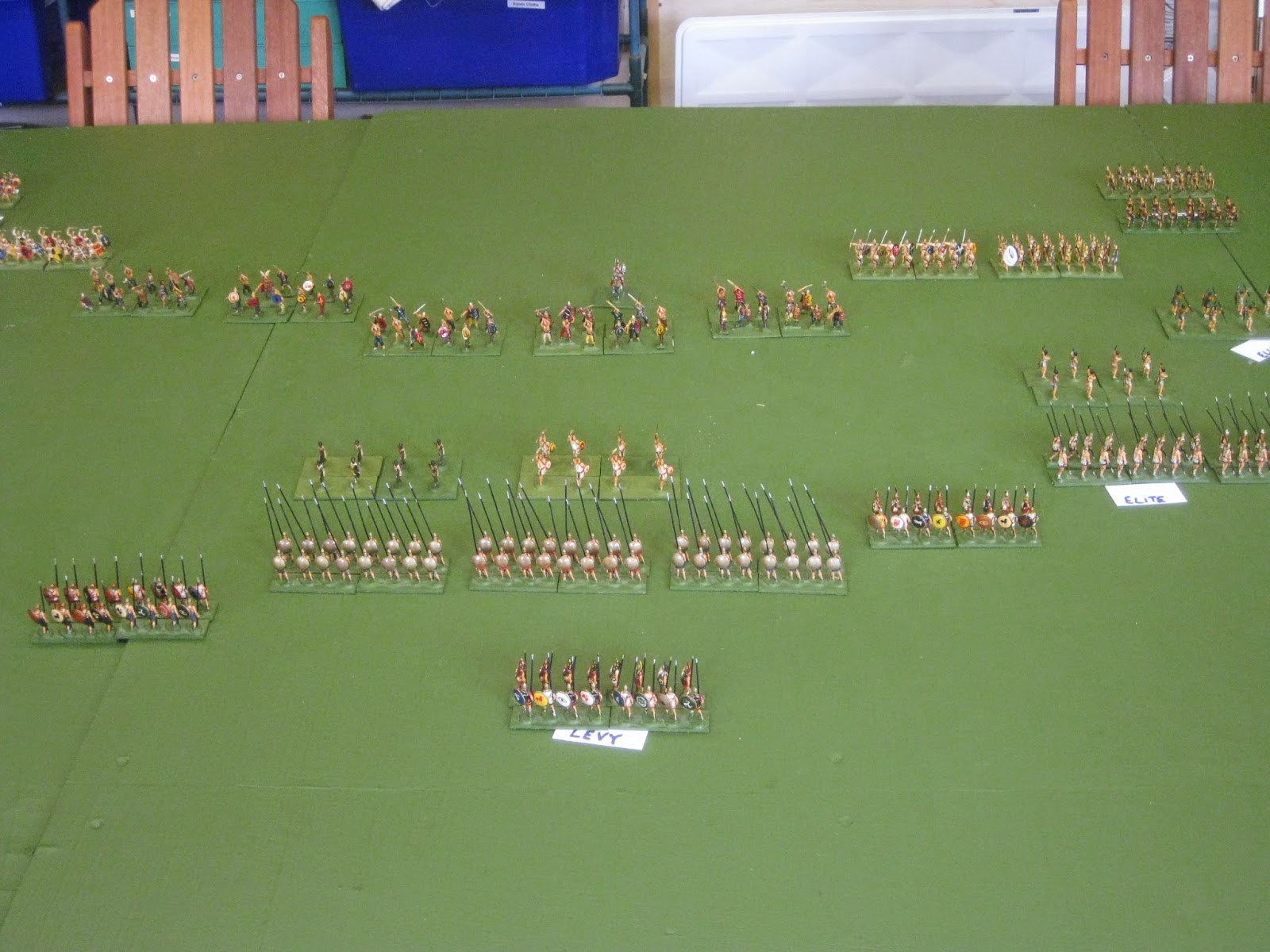 The centres close. The Macedonian light infantry covering the Hypaspists are able to inflict some hits on the Spaniards covering this flank. Hannibal's lights in the centre are endeavouring to do the same. 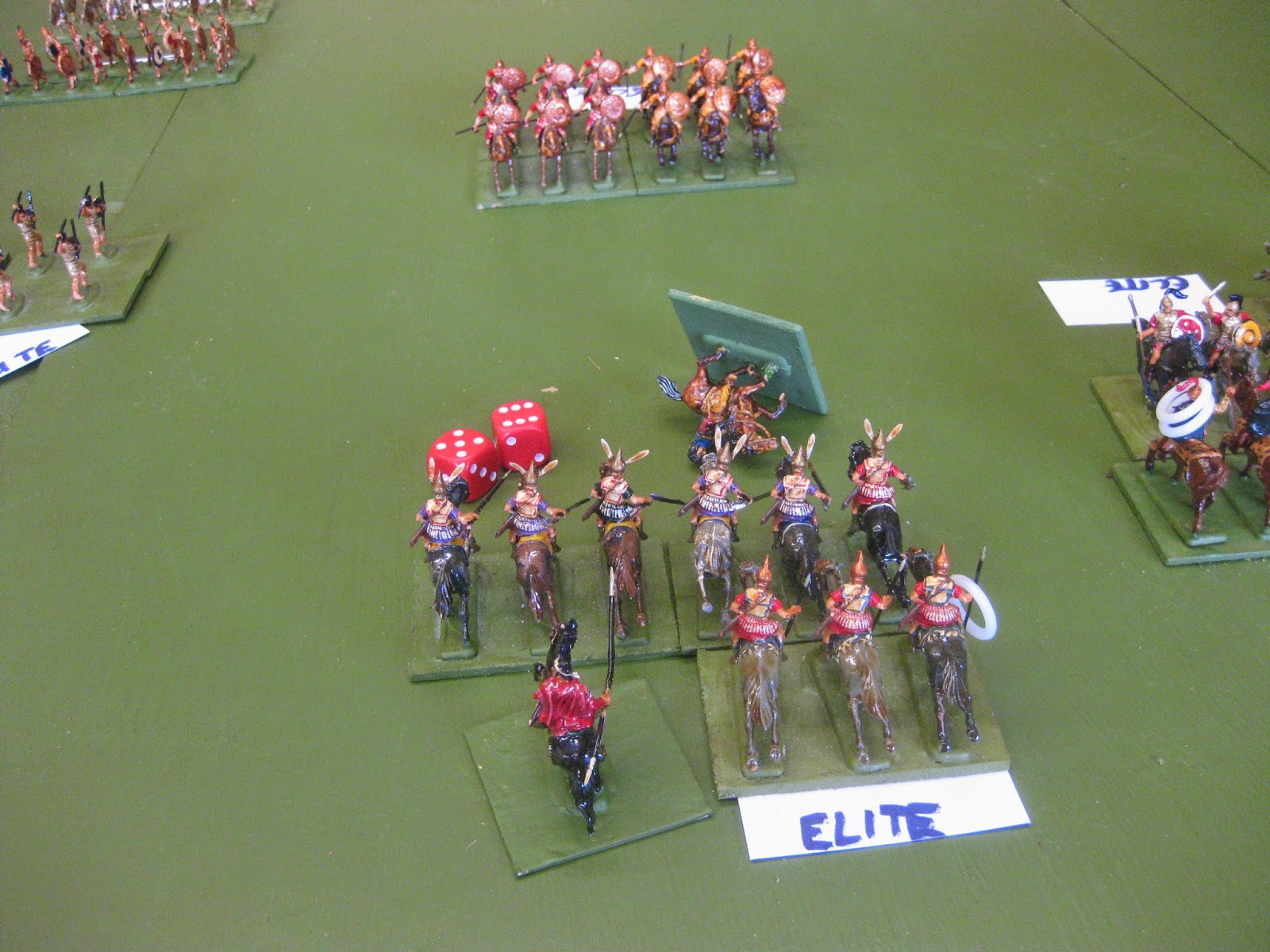 Alexander is doing well against Hasdrubal, wipes out his cavalry and also kills him. This is a serious set back for the Carthaginians, to say the least. With the flanks so important in this battle having a General in position at the point of action on each flank is proving effective for the Macedonians. The light troops in the centre skirmish and do a speed bump impersonation. Under AMW it is a good idea to knock a base off phalangits/hoplites as it seriously degrades their performance when fighting other heavy foot. Well worth sacrificing some light troops to achieve. 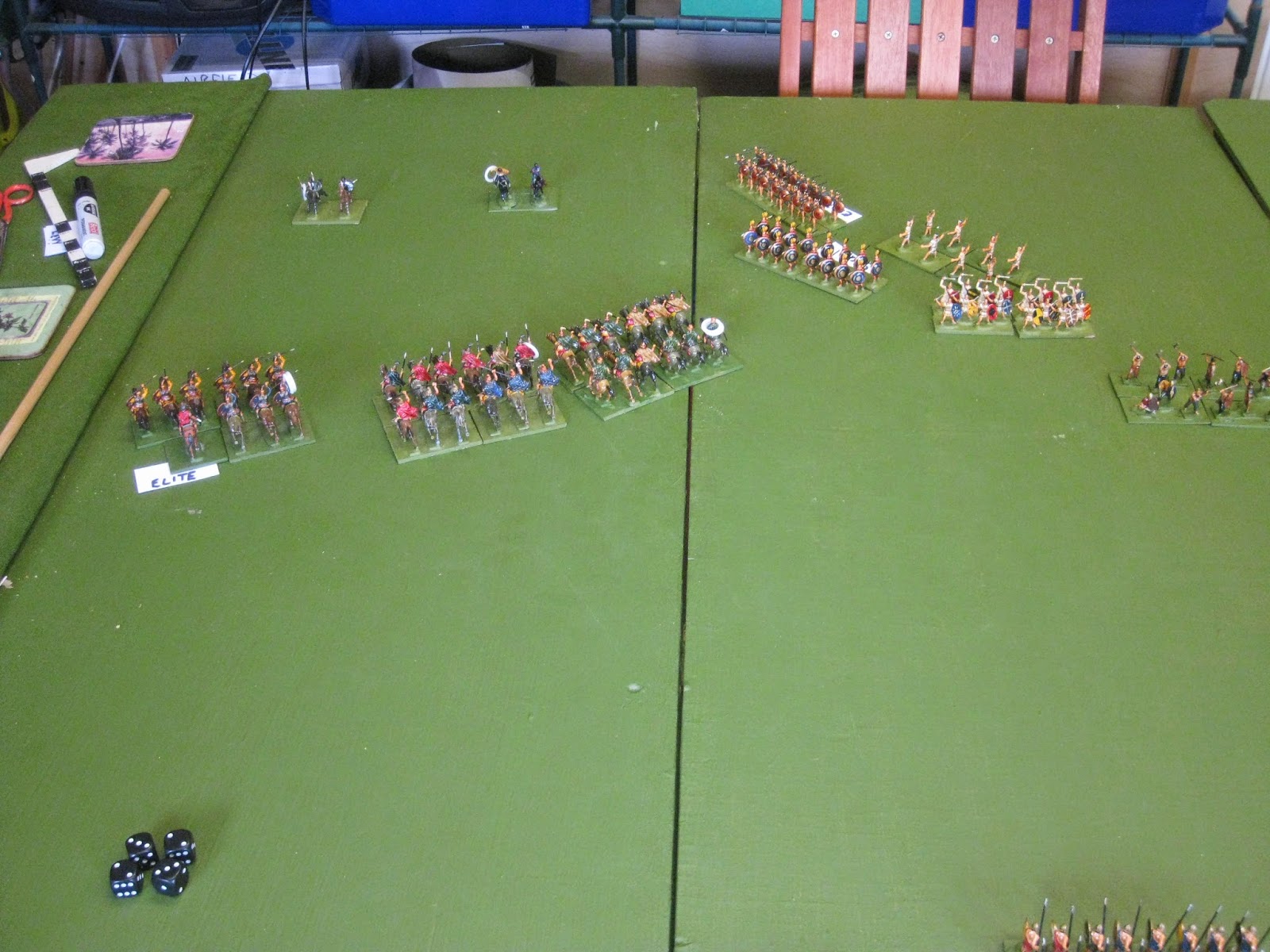 On Hannibal's right the Numidians ran out of room and took some casualties. They have effectively been driven off by Parmenio's cavalry. The African veterans are having to react to this threat, rather than support their infantry, wheeling outwards. 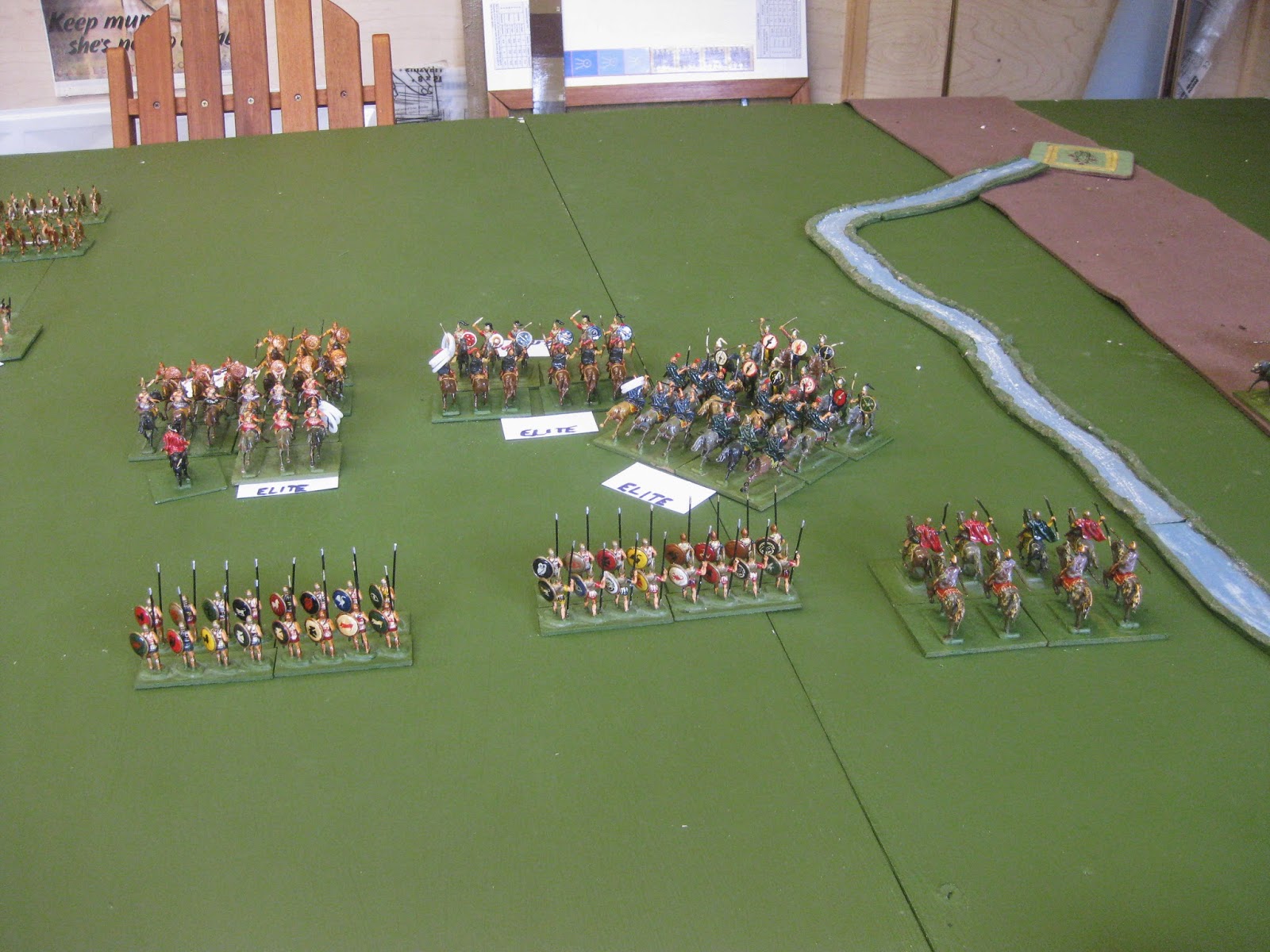 It's nip and tuck on the other flank. Alexander has barrelled into some more Spanish heavy cavalry whilst the other units line up and get stuck in. The Prodromoi have kept out of trouble and are lining up to hit that Carthaginian unit in the flank. 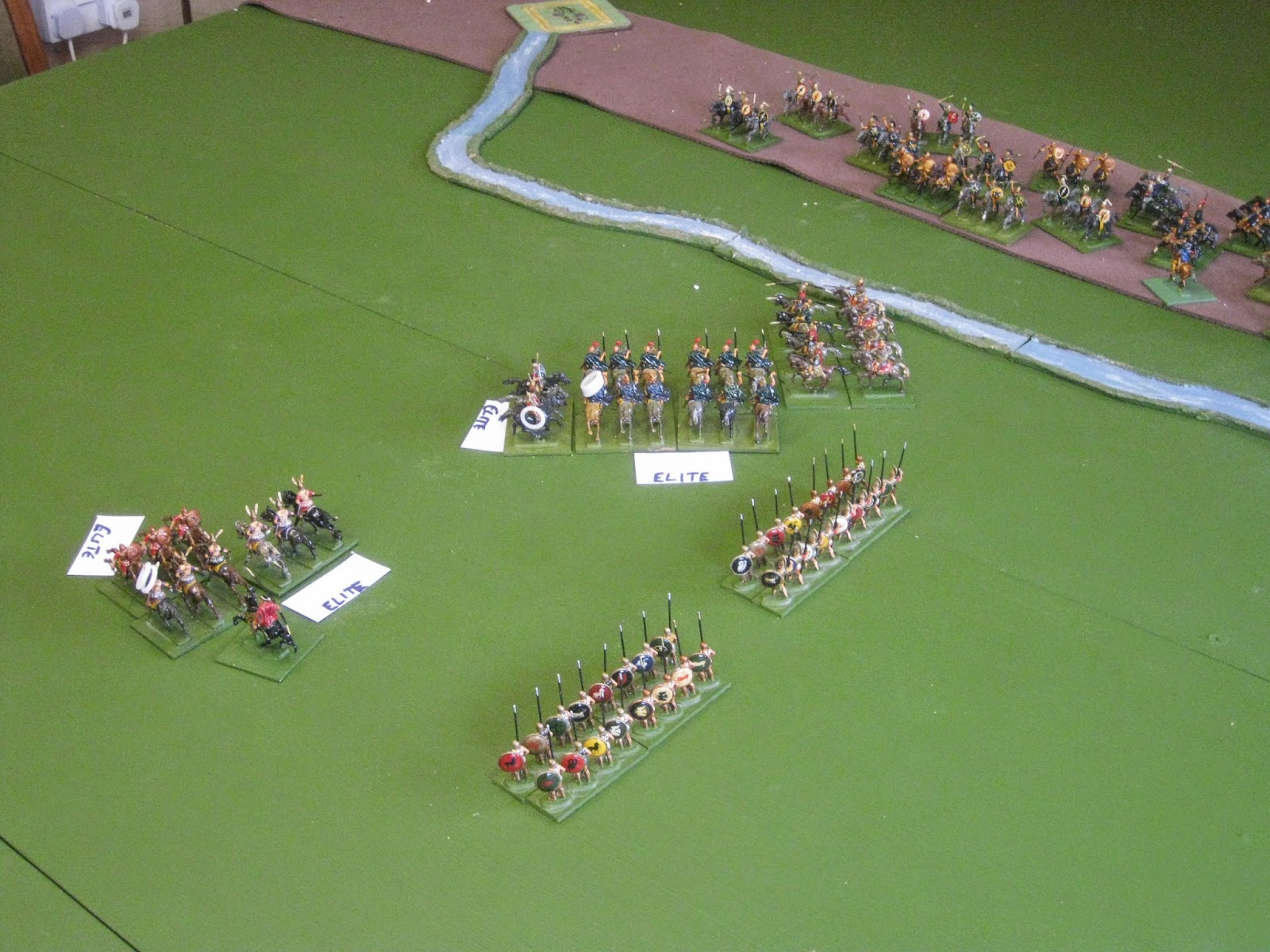 Next turn Alexander loses his middle cavalry unit and the remnants of their opponents hit the side of Alexander's other heavy cavalry unit. Alexander is making good progress with his second opponents of the day. The Prodromoi throw themselves into combat and secure the destruction of the left most Carthaginian cavalry unit. 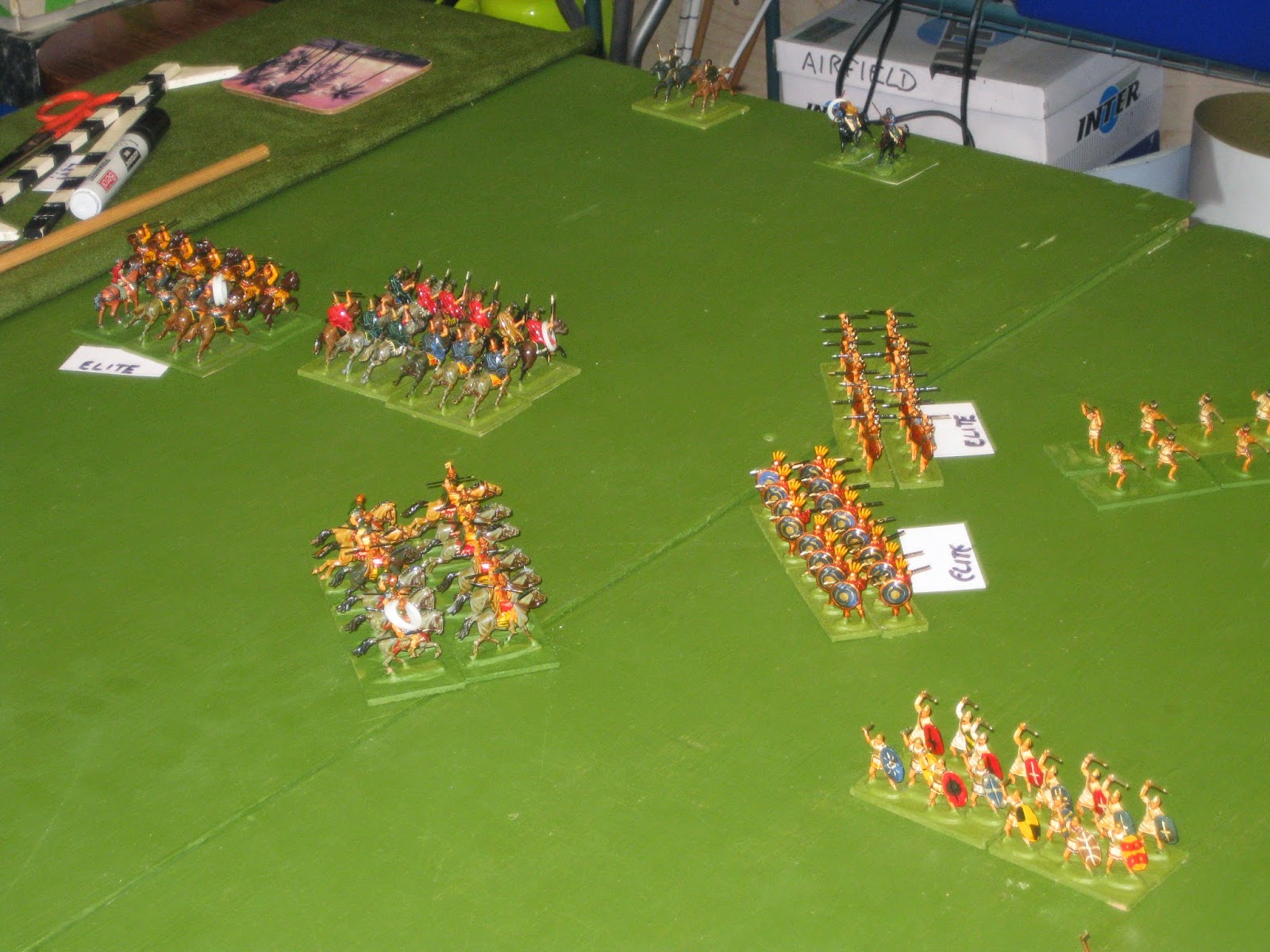 On the other flank the Africans are forcing Parmeio's cavalry out wide and prevent them from attacking the main line in the flank. 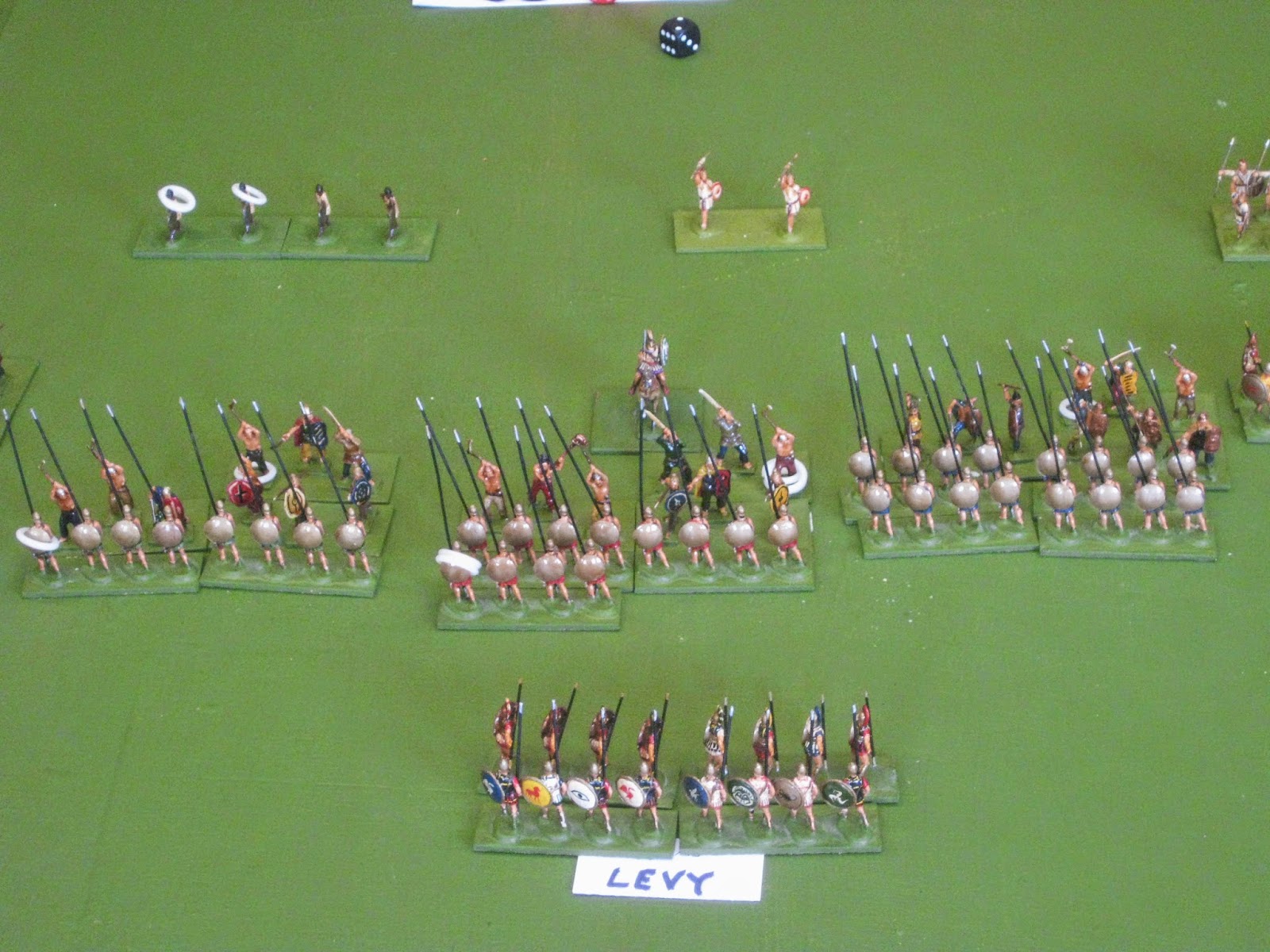 In the centre the infantry finally collide. The Celts put up a good showing against the pikes (the left hand phalanx is cut to half strength by their initial charge), but it is hard going. Hannibal is able to shore up the centre by getting involved. He needs some wins here, with the flanks both looking a mess. 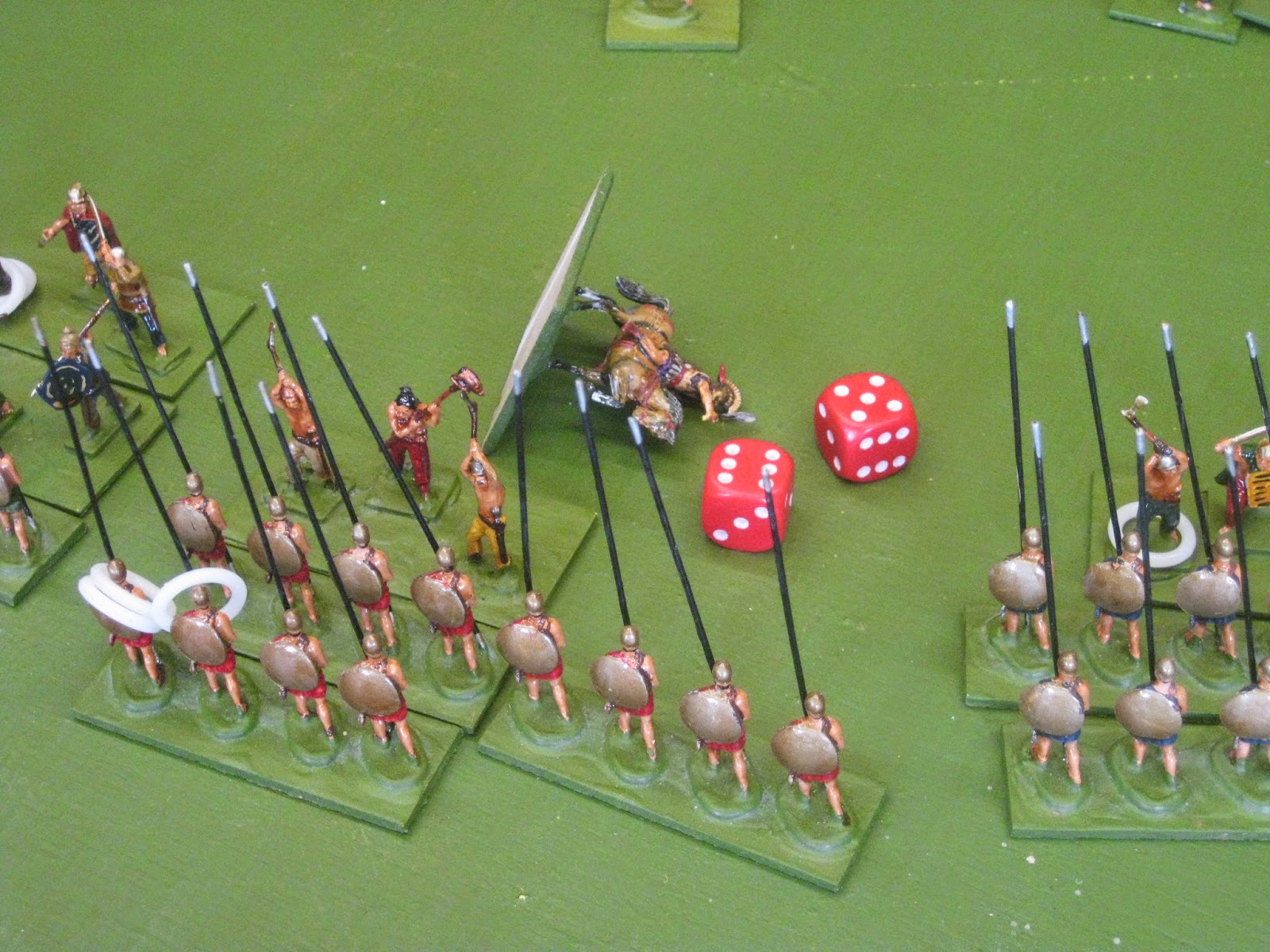 And then it goes seriously wrong. Hannibal was needed in the front line to stop it collapsing too quickly (Generals get selective dice re-rolls, which can be devastating in melee) but his Celts are on the end of a thrashing this turn and he fails the General kill roll. Both the Barca brothers down and out in the same battle. 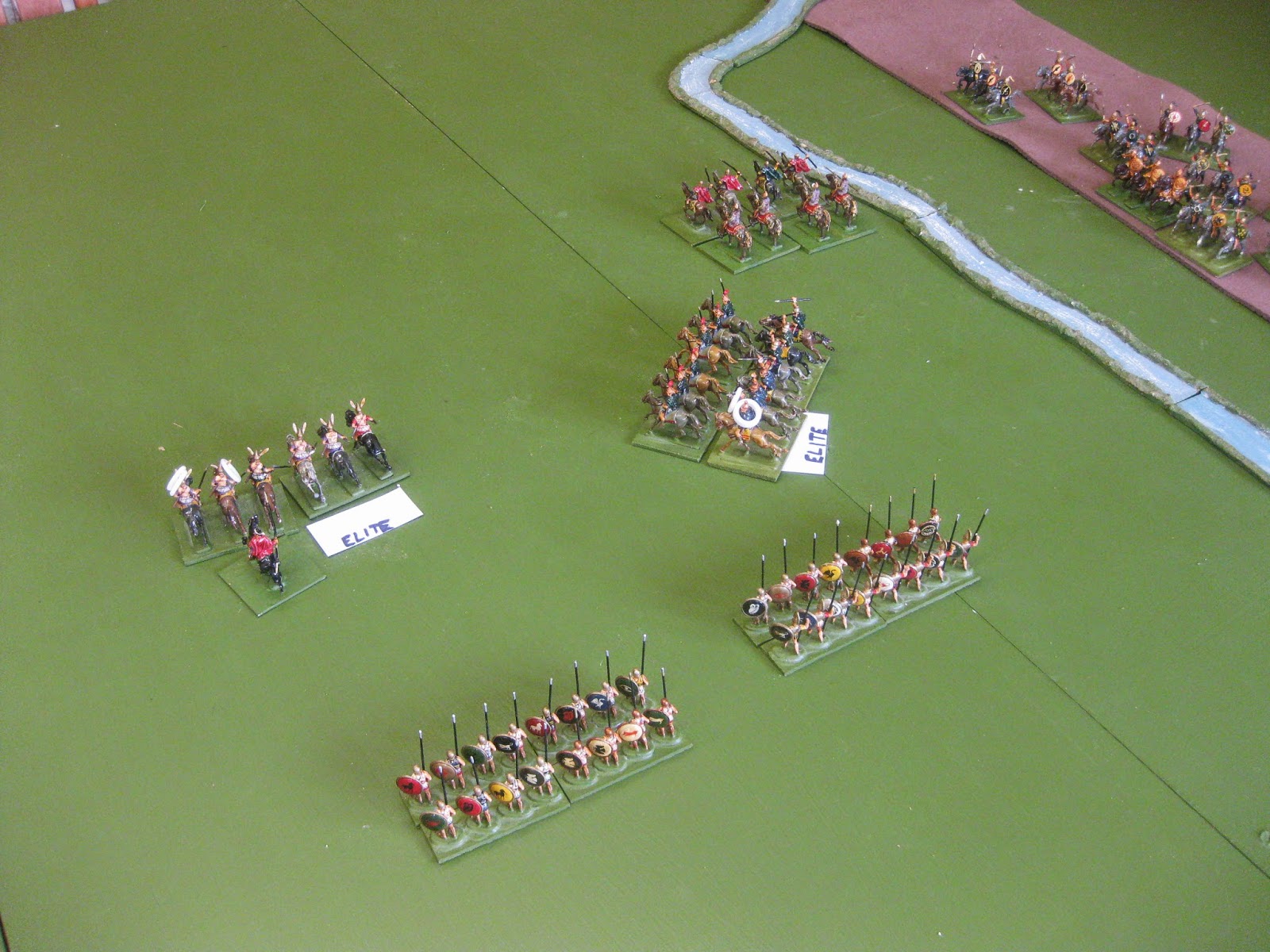 The right wing has now cleared up for Alexander, and he can now turn the flank of the centre. 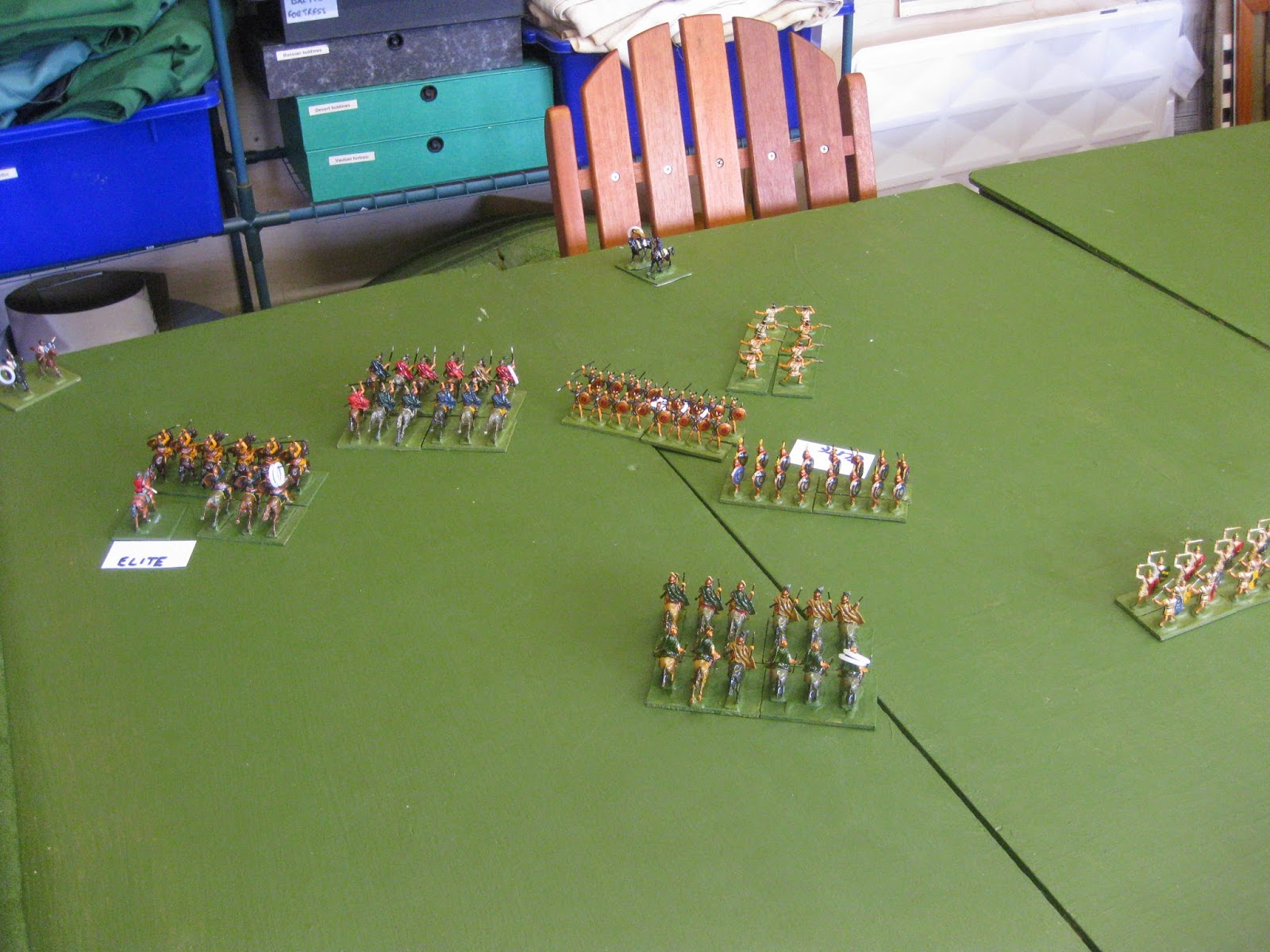 The left wing is more problematical, as the African veterans can keep forcing the cavalry out wide by turning to face them, effectively operating on internal lines. 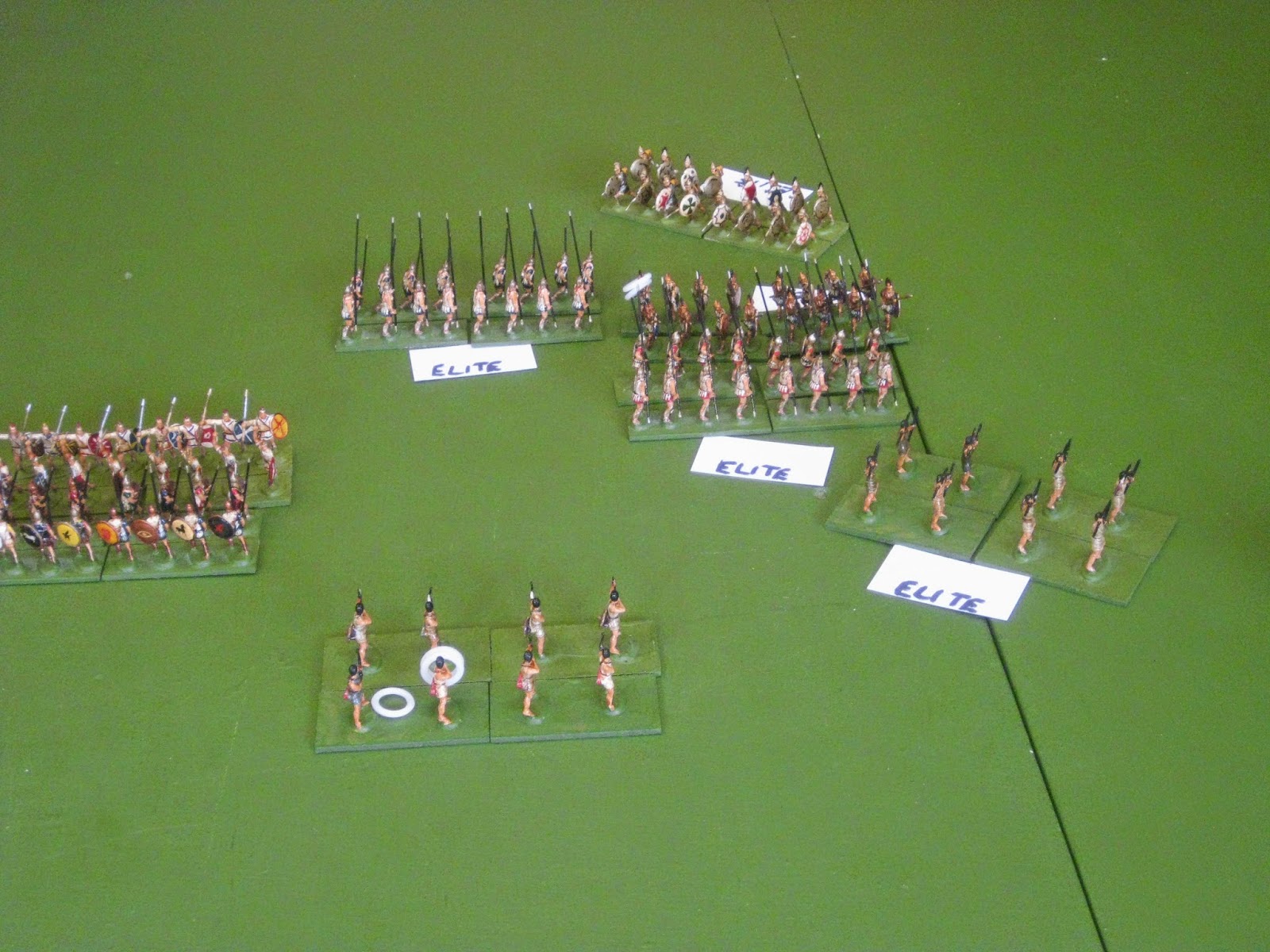 The other big clash of the day, - Hypaspists v  African veteran foot. The Hypaspists have a leg up due to hits inflicted by their light troop supports. 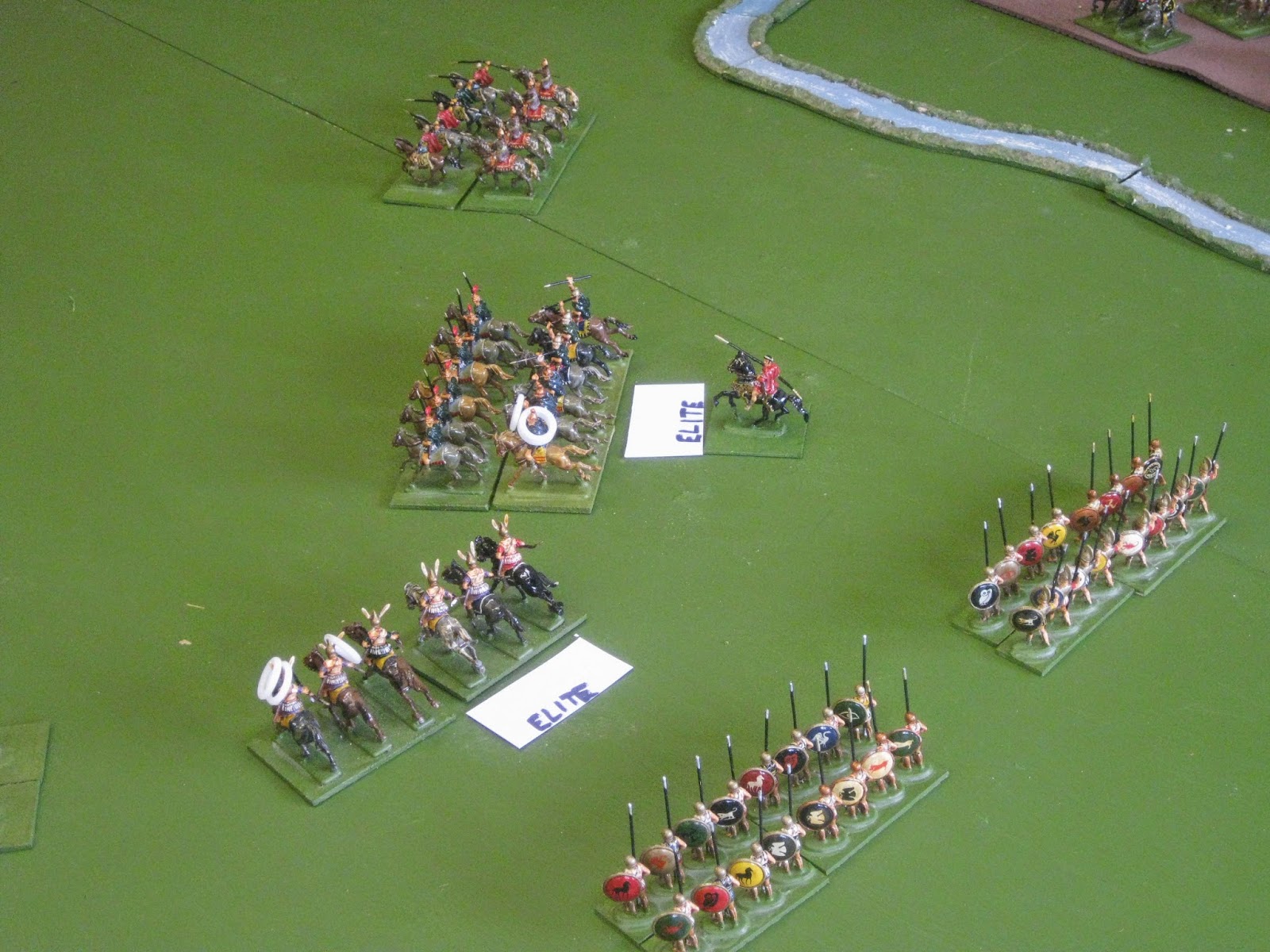 Meanwhile Alexander swaps units to one with a longer life expectancy. 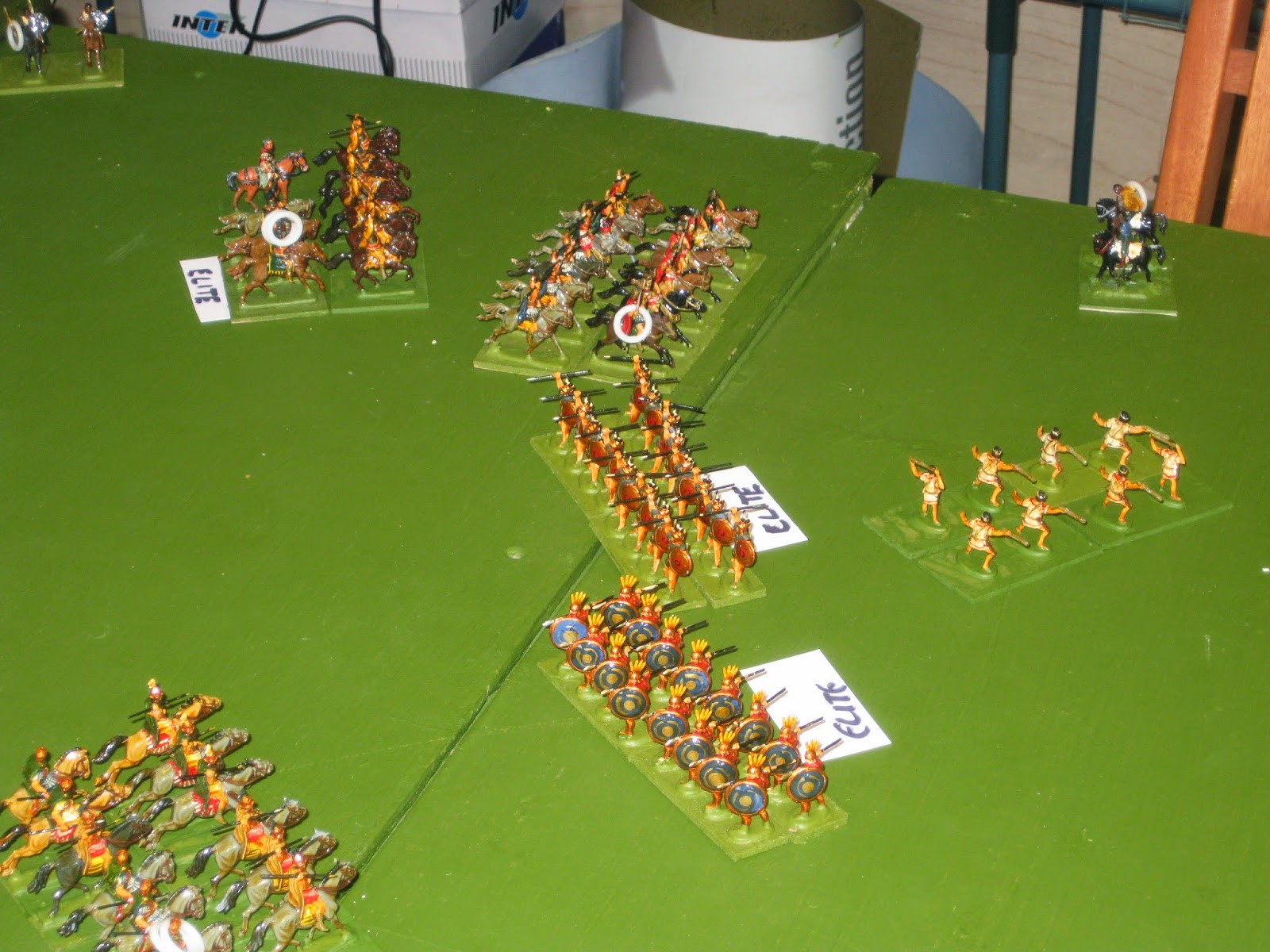 This is getting very frustrating for Parmenio, but he eventually turns the position. 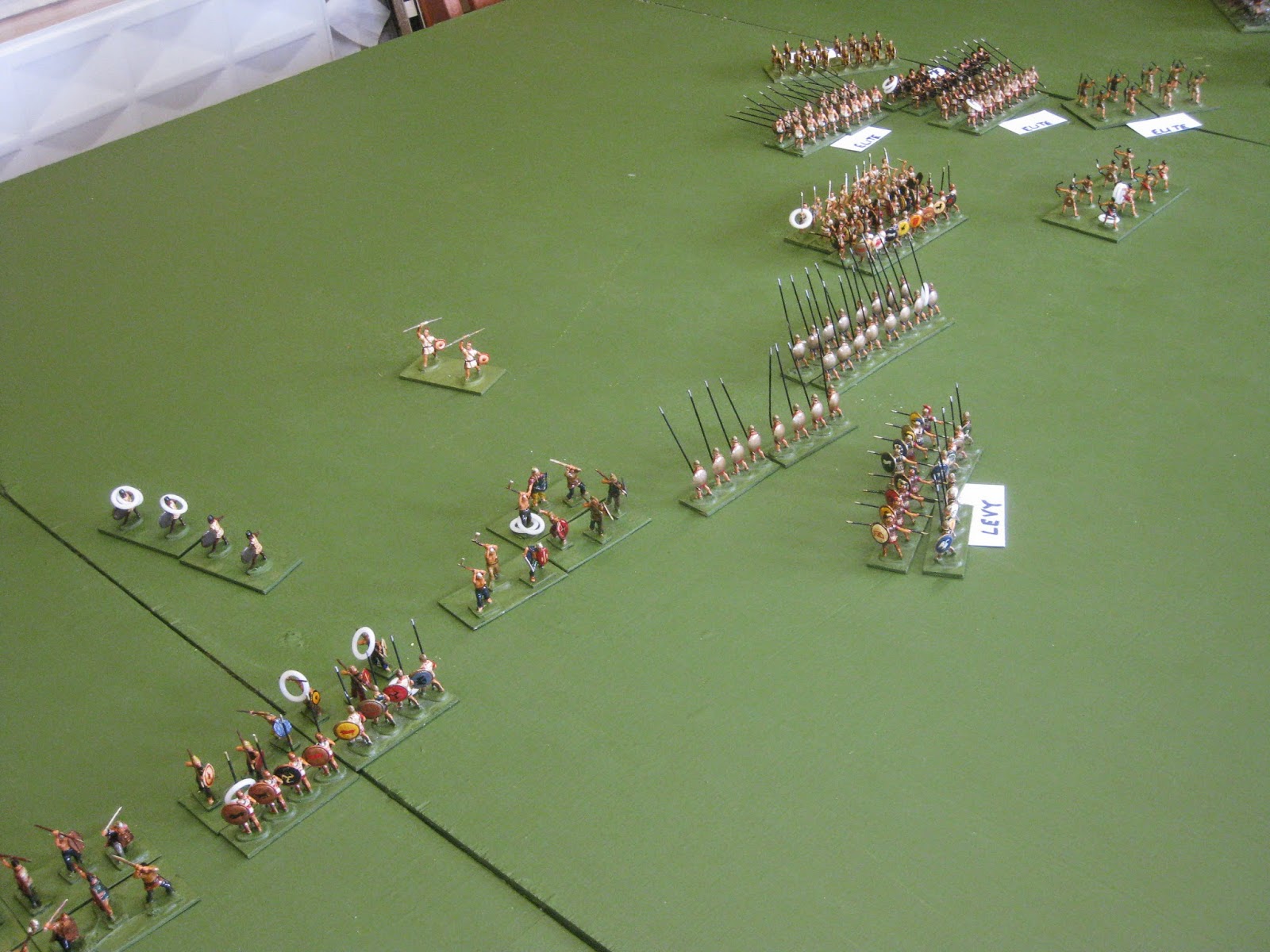 The Celts in the centre have finally collapsed, and the phalangites advance into the pocket... only there are no sides to it any more. 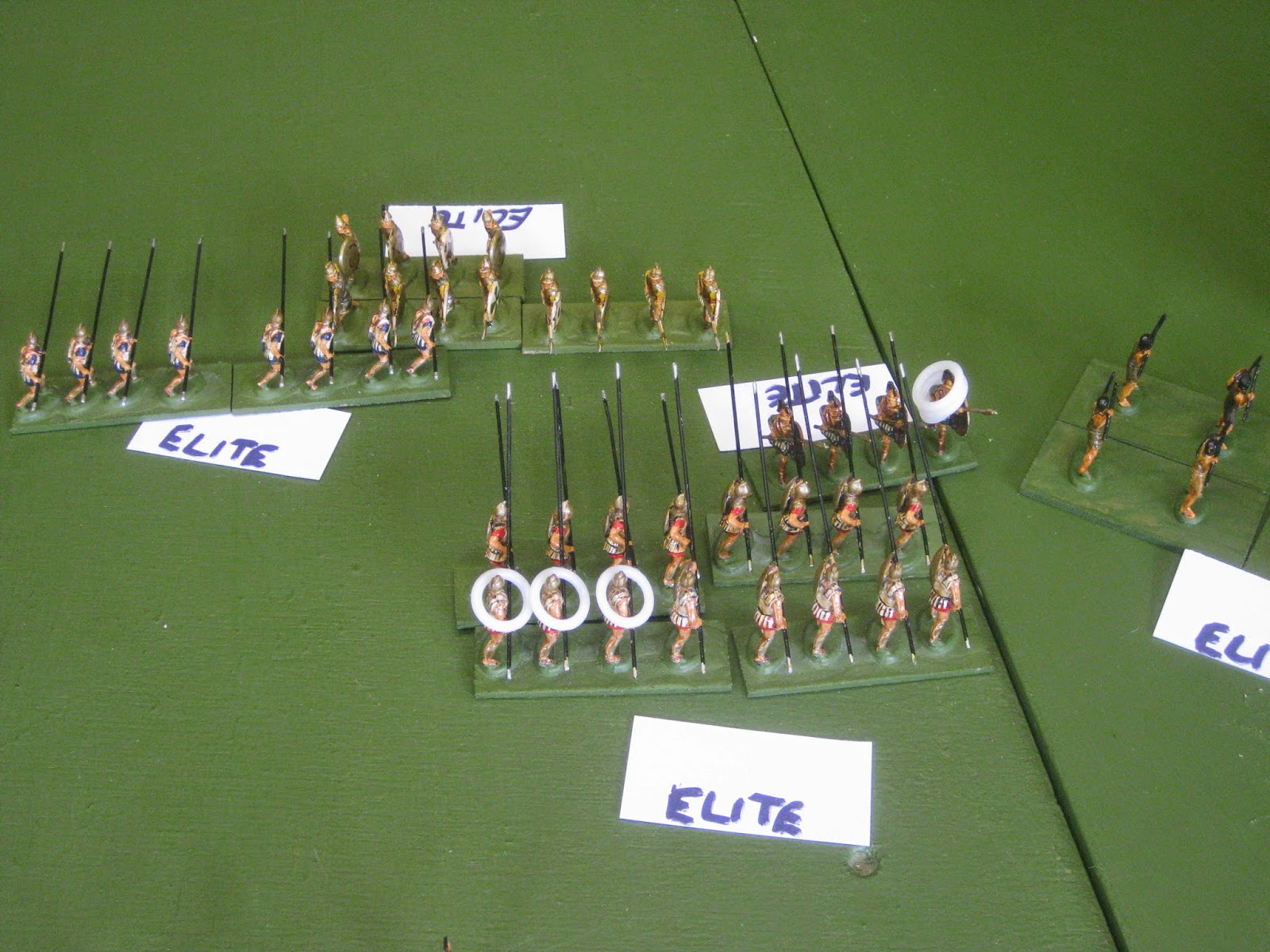 The clash of the infantry titans is in the balance, with both sides looking like they're going to lose a unit. 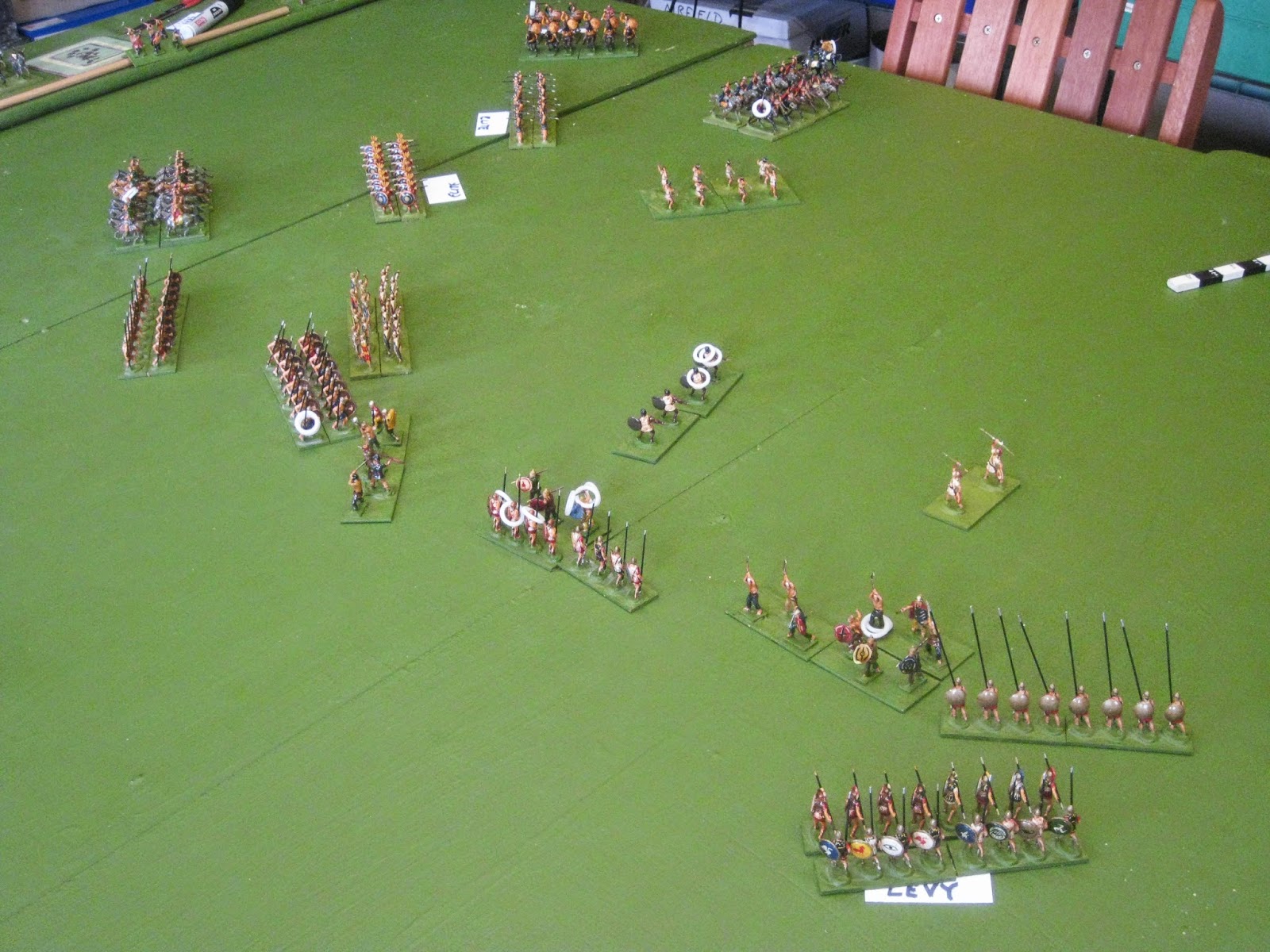 The infantry fight on the other wing / centre has become very scrappy, but the Macedonians clearly have the upper hand. 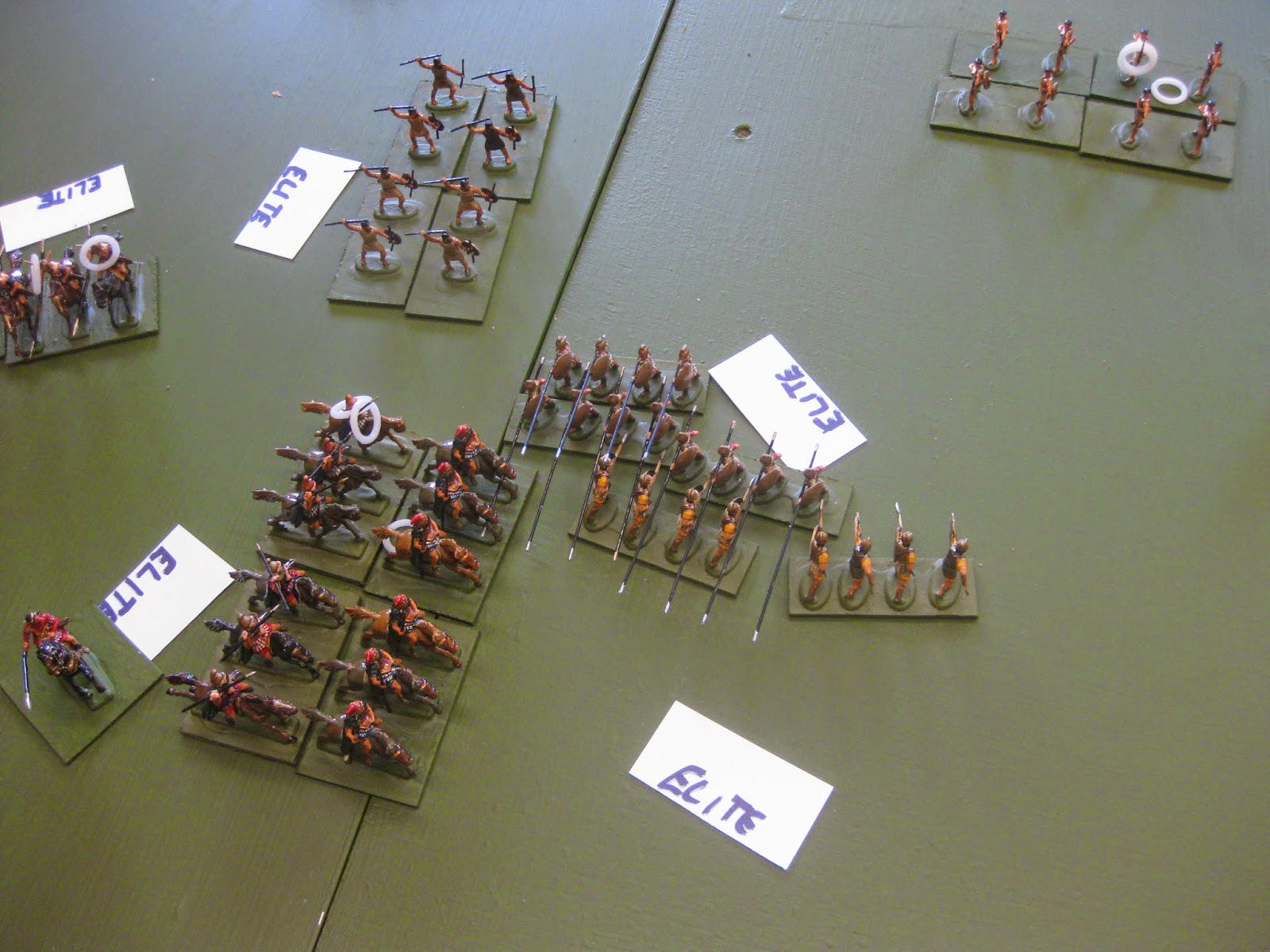 We're down one African veteran and one Hypaspist unit a piece, but Alexander has got round onto the Carthaginian's flank. Can't be long now. 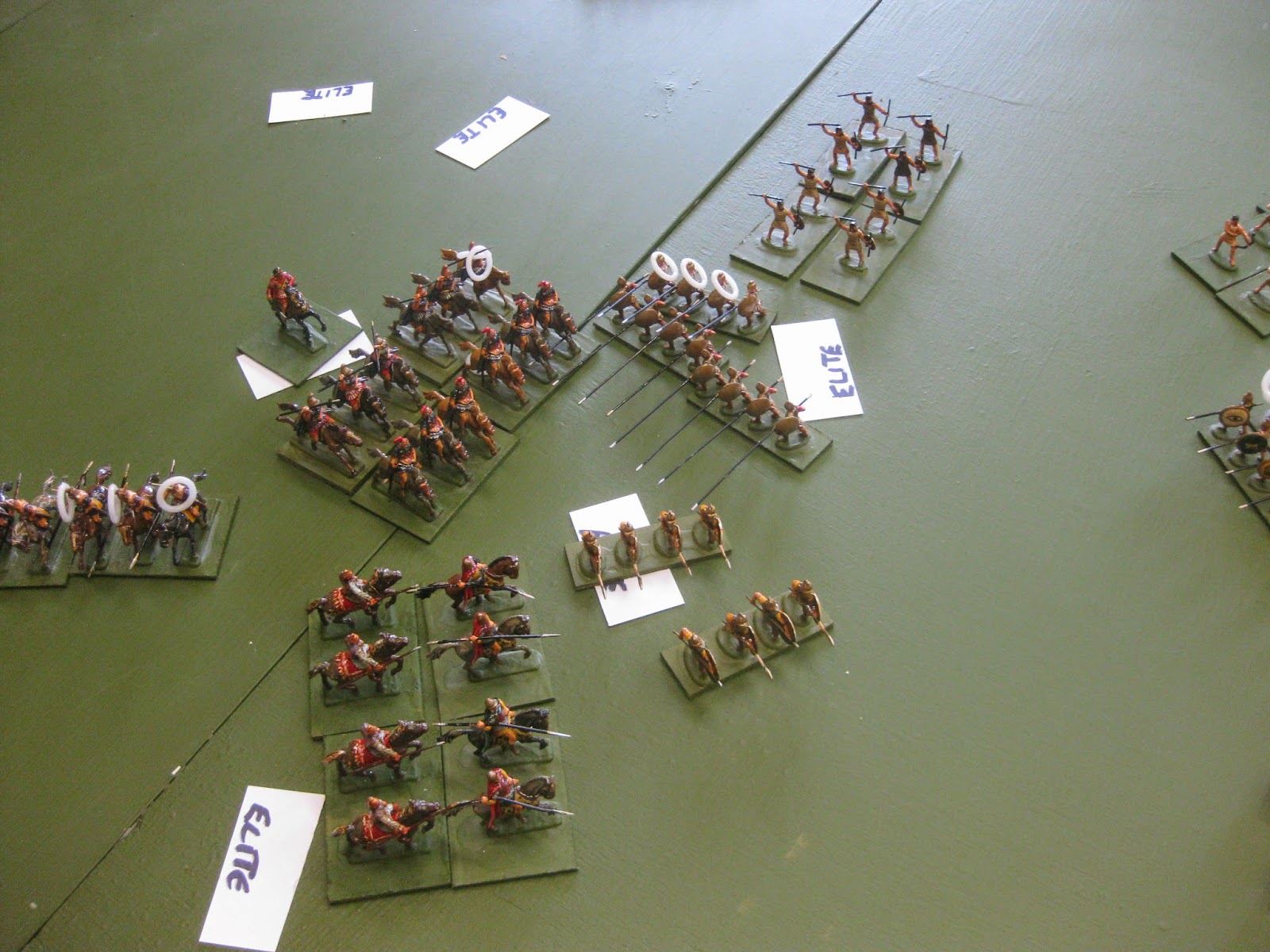 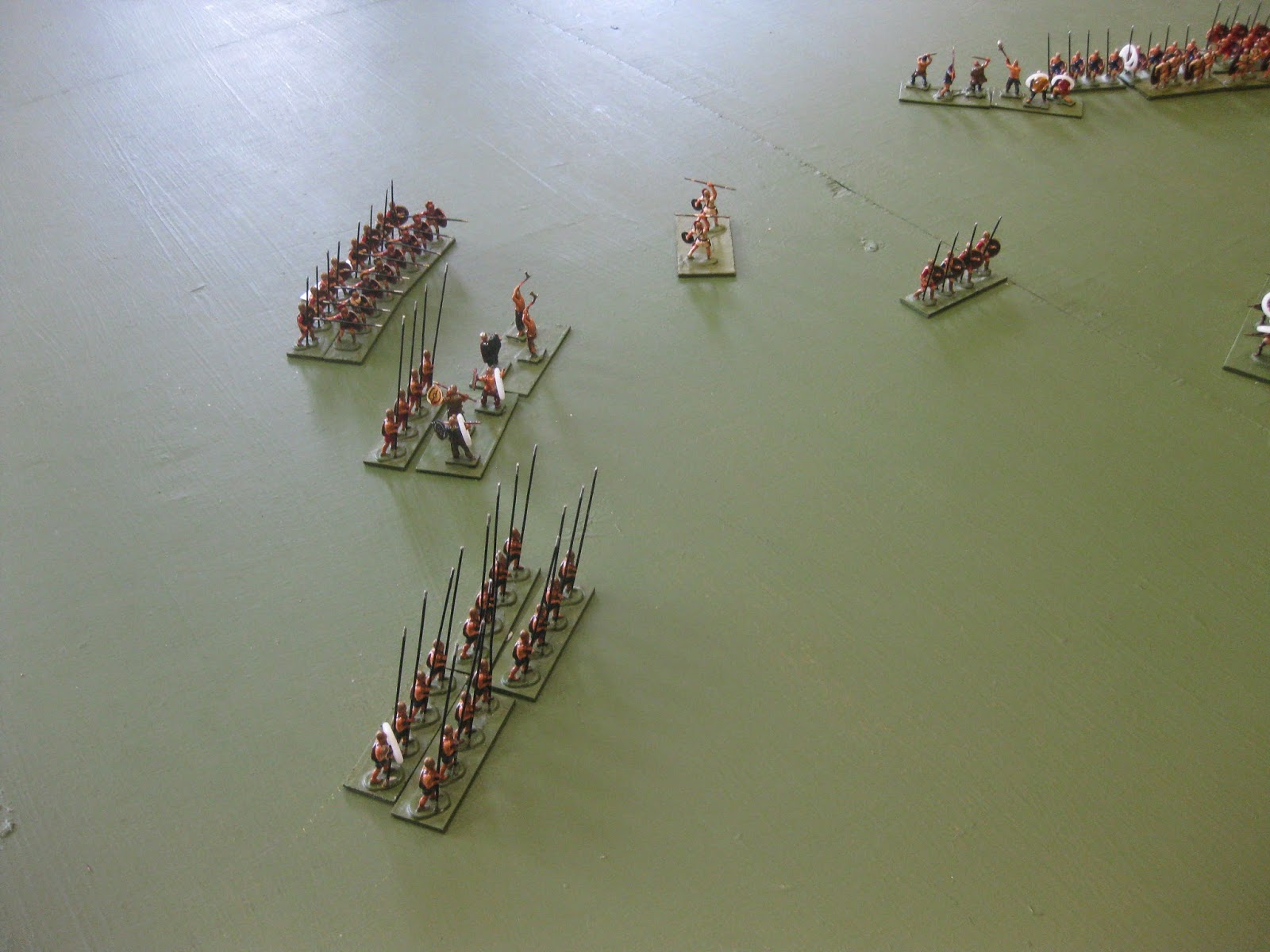 The Macedonians have now also cleared the centre. 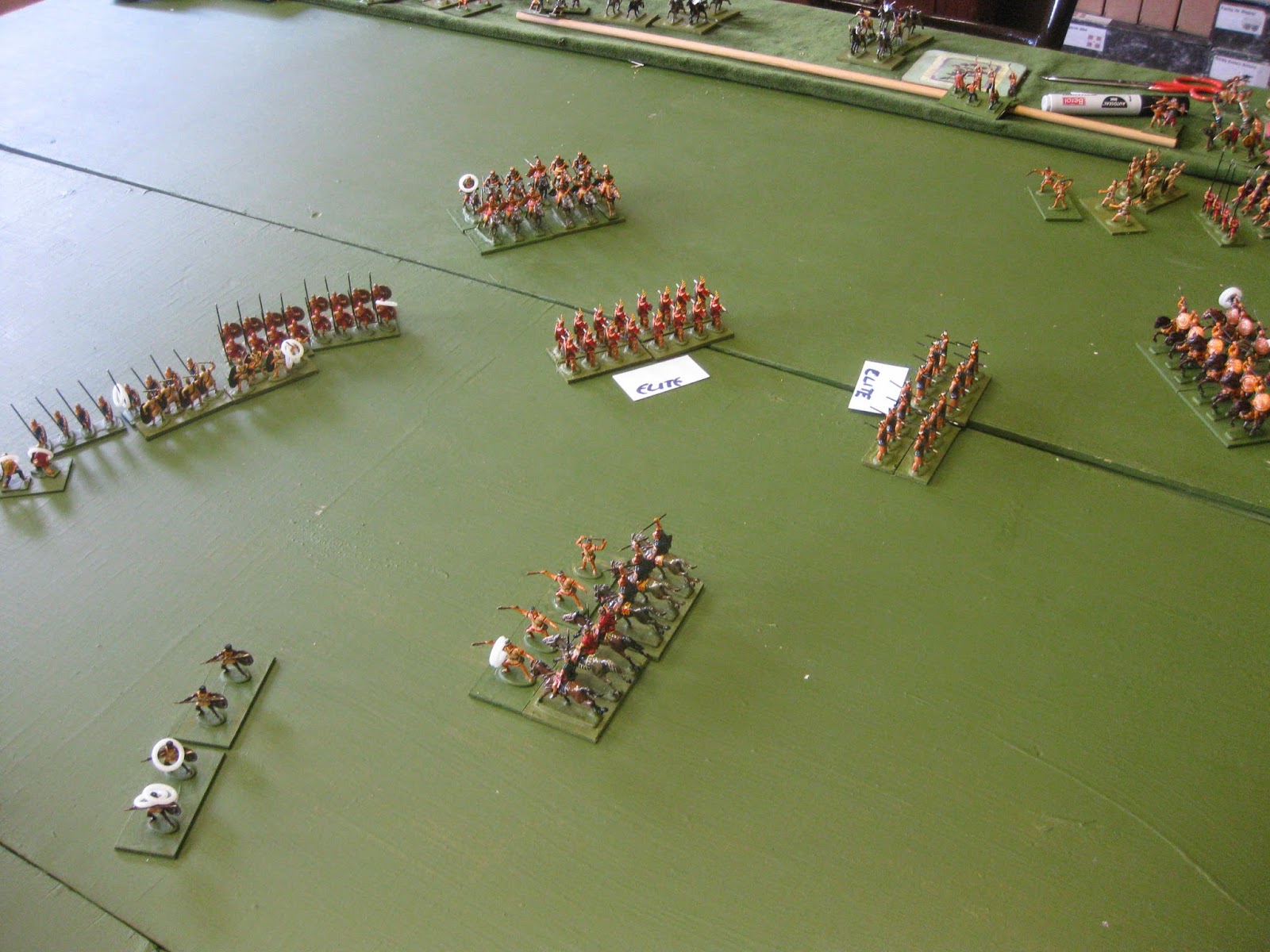 The remaining Carthaginian veterans on their right are now effectively circling the wagons for a last stand, fighting back to back. 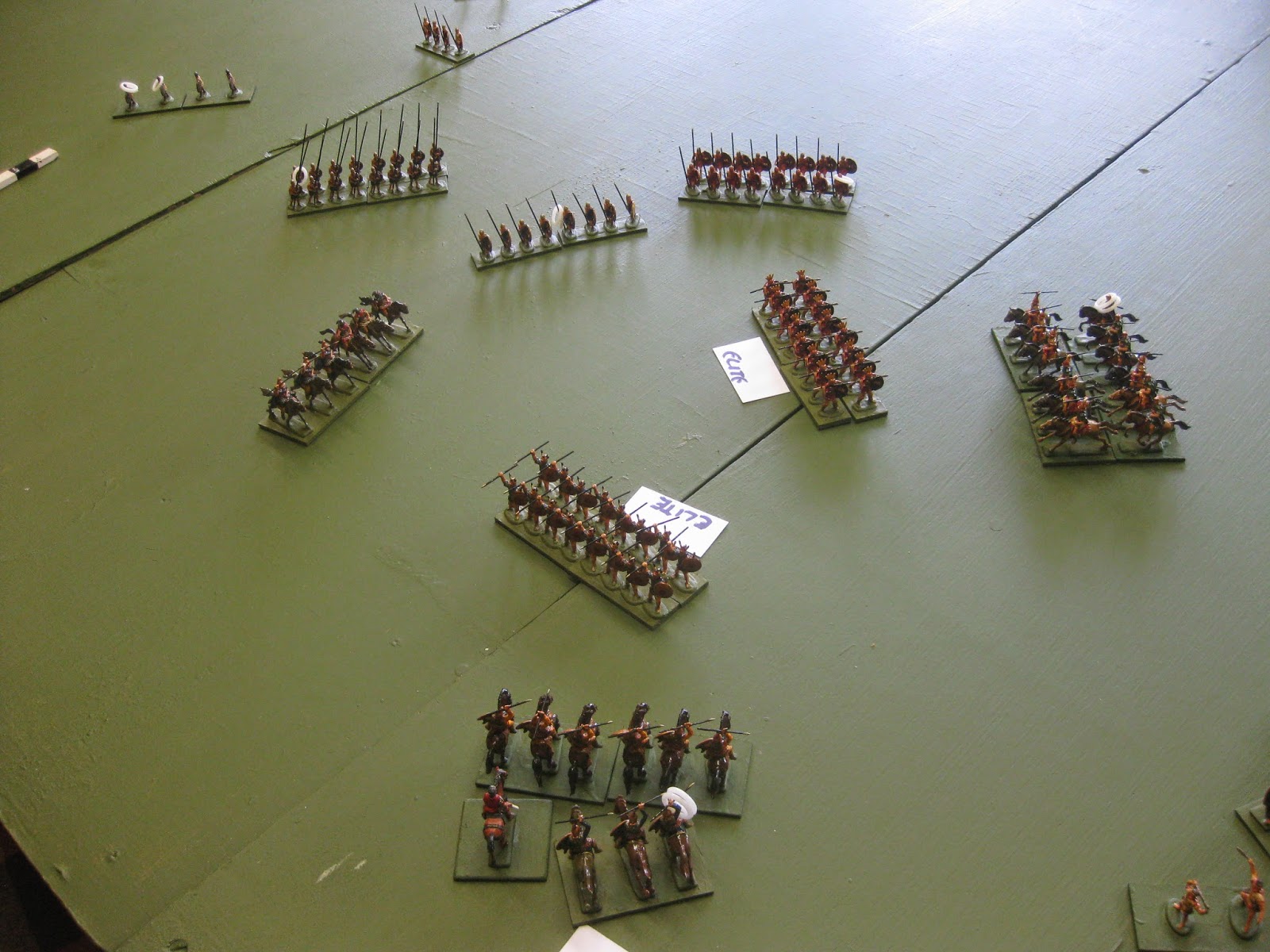 And this is how it ended, with the last two Carthaginian units surrounded. Perhaps Alexander will be merciful.

So, a clear major victory for Alexander. He was lucky in the game, and of course a lot of it depends upon how you rate the troops. I think the Companions are the best cavalry out of the two armies. They decline under the Successors and lose their hard charging ability. I also think that the phalanx is superior to the Celtic warband.

It is often overlooked that Hannibal only ever won if he had cavalry superiority, - which in his period was mainly down to who had the Numidians. Alexander does not concede the cavalry advantage in this army, unlike the Romans. Hannibal would never have fought Alexander in a battle like this, - not if he had any sense, - and would have had to manoeuvre to get some form of terrain advantage. Which means Alexander would have refused to fight, or found a way to negate the advantage. Then add to that the fact that Alexander is not just a tactical genius, but a strategic one as well. Hannibal may be the former but he isn't the latter.

So, an enjoyable way to spend the day, but it probably proves nothing.
Posted by Trebian at 15:01