Is this my favourite game?

So, Monday afternoon Mrs T went off to visit a friend for a cup of tea and chat so I thought I'd squeeze in a game. I e-mailed Phil and suggested "AK47 Republic", partly because Peter Pig have just made it available as a pdf on their website. By pure chance he'd just found his copy of the 1997 classic version. It seemed as if fate had thrown us together.

I've got several versions of the original rules, including a 1997 v1 and the May 2006 v2. The latter includes all the suggestions made on the RFCM Yahoo Group and frankly has a load of stuff in it that it shouldn't as everyone's pet ideas got pushed for inclusion and Martin just seemed to lose all critical faculties. Looking back I understand why he dumped it and went off to do Reloaded.

Still, back to the story. I went for a classic game. 6' x 5' table, type three terrain and one of my earliest armies,- a Dictatorship with a two tank unit and a mortar battery. As the table was bigger than normal I also gave all my infantry trucks as well. No particular attempt to finesse the points system with that one.

Phil had his PANTO (PAN-african Treaty Organisation) Dictatorship as well. This has a helicopter and APCs with heavy weapons in it.

Phil attacked, I defended. I got some heavy weapons from the political chart. Phil played a blinder and got everything. 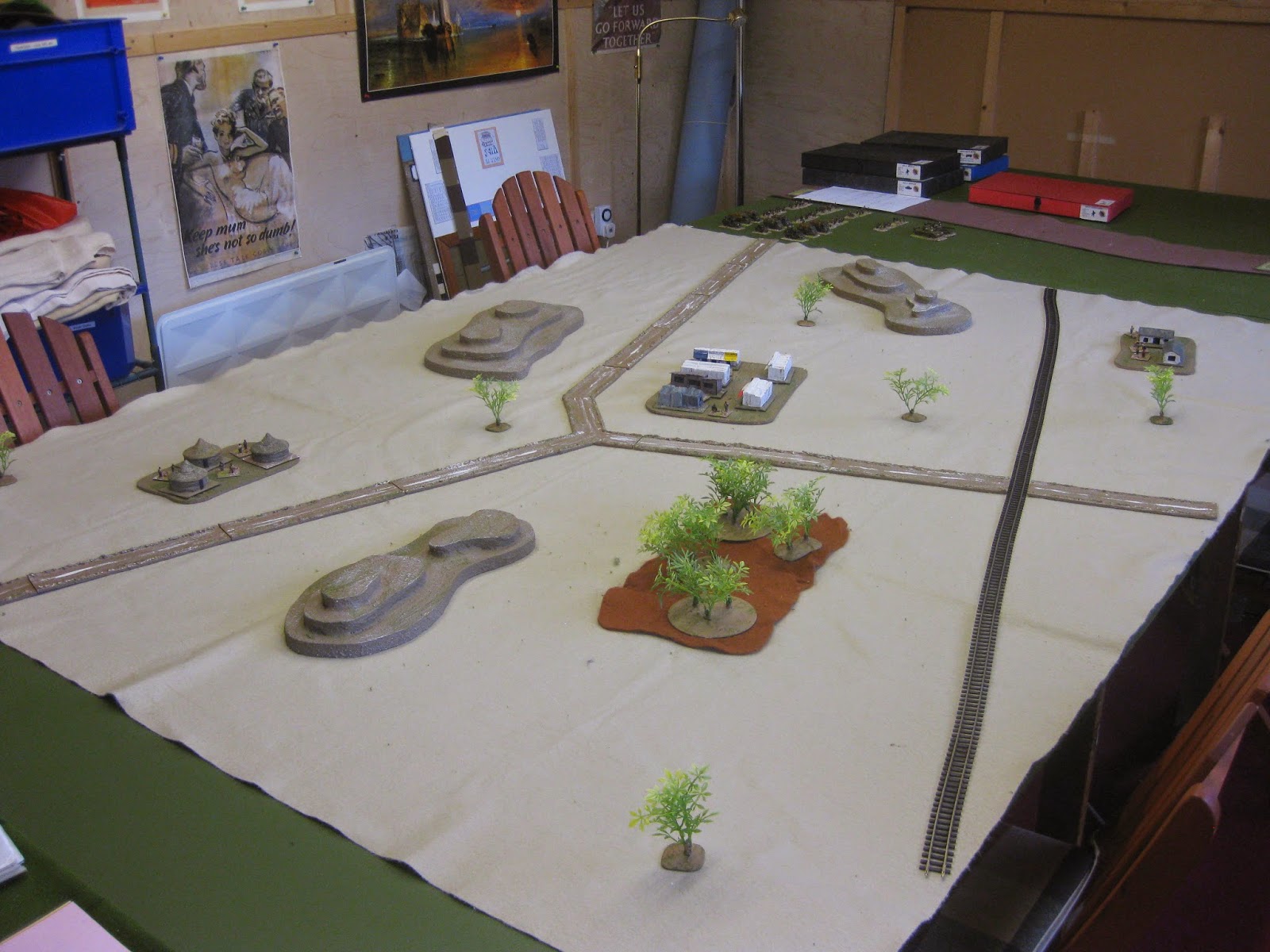 This is the table before we got the troops on. The ridges are gently undulating hills. The trees are scrub. For objectives Phil chose the hill in the centre left, the main central village and the aid station top left. I made him come on from bottom left. 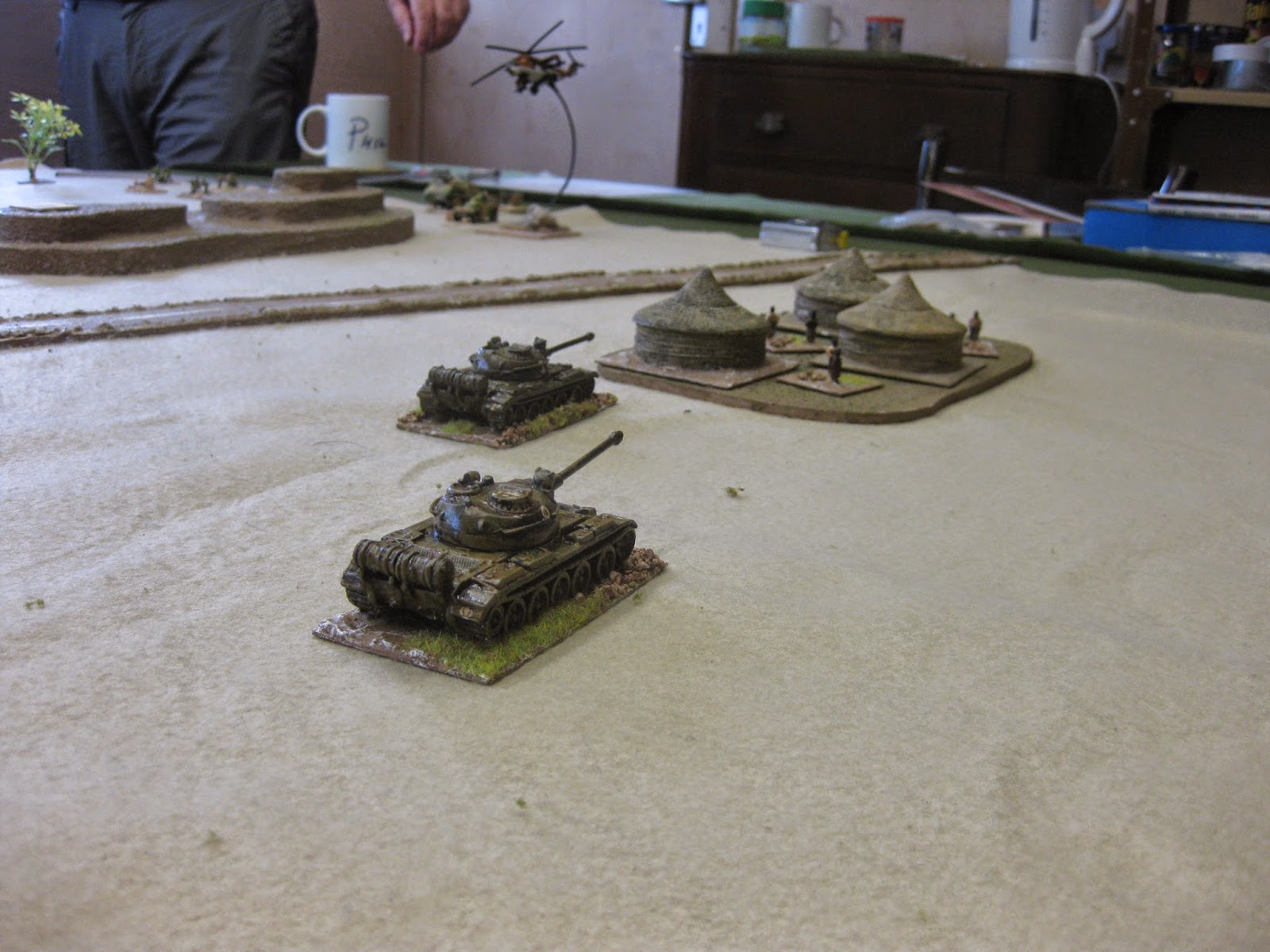 I got three units on. My tanks, the mortars and a militia unit with my C-in-C. Phil got his attack helicopter (gulp) a regular unit with supporting vehicles and his C-in-C's APC with AA gun. Or something. 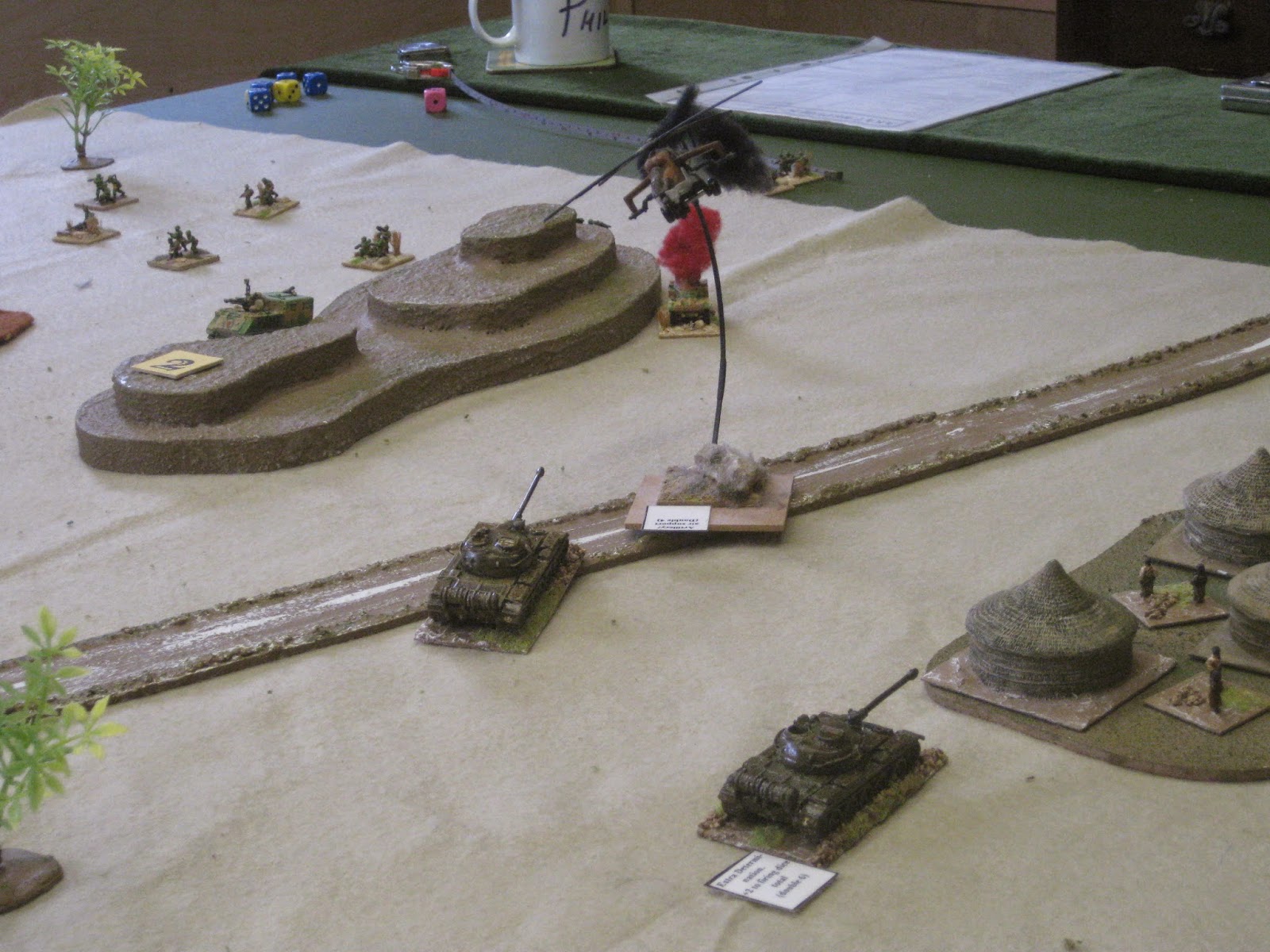 The helicopter immediately took on my tanks, who had hit one of Phil's support vehicles for his infantry unit (see red smoke). His infantry were meanwhile rushing my militia hidden in the scrub. My mortars were on the central hill, mostly out of range. His General is skulking behind the hill near the objective marker. 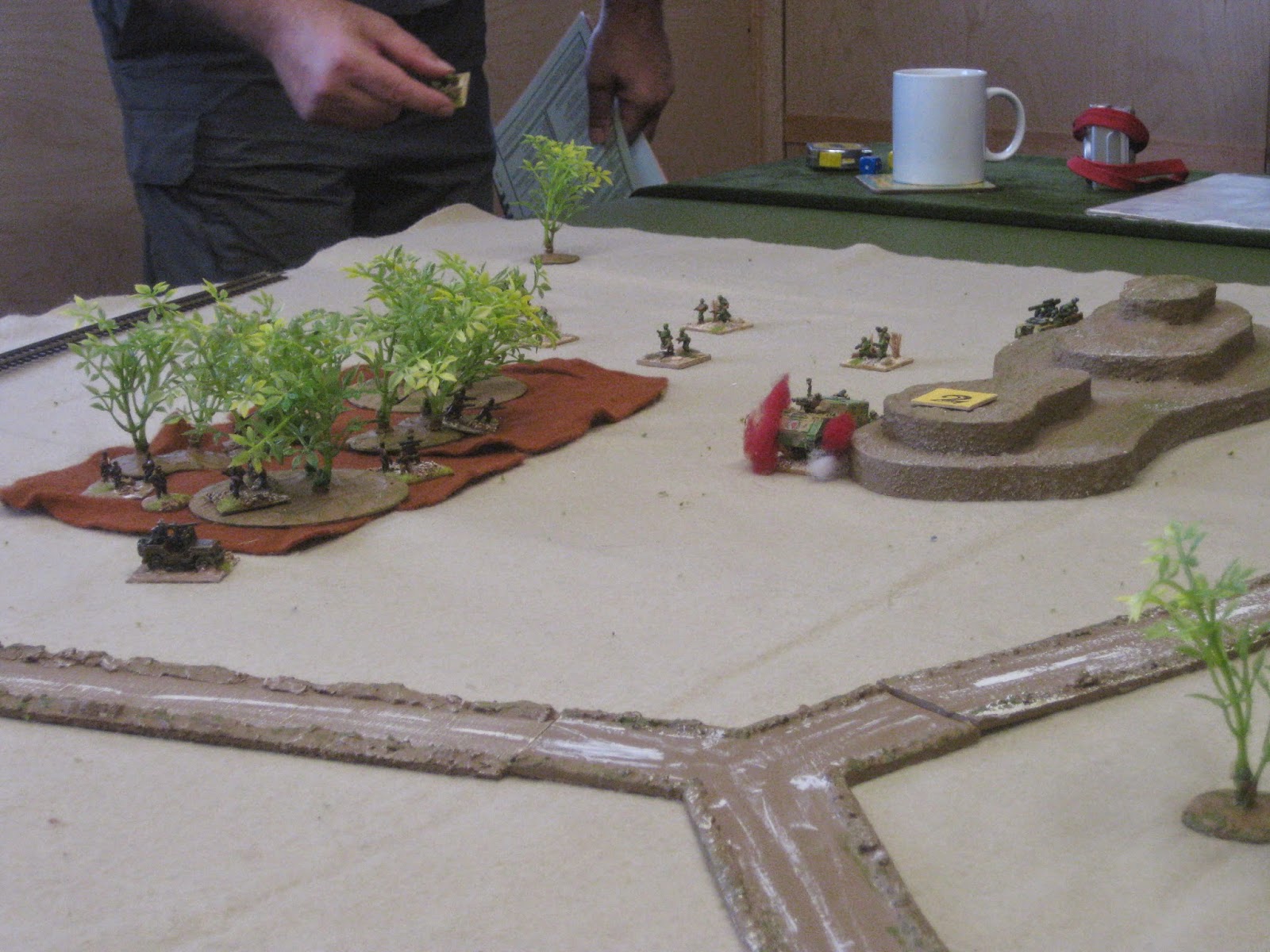 Never underestimate your opponent's militia units. My militia had a jeep with an HMG on it (when I bought my initial AK47 kit Martin hadn't produced the Toyota technical) drove up and blazed way at the General's APC and brewed it. Luckily for Phil the General escaped. In this turn I also hit the helicopter, but it made its saving roll for moving. 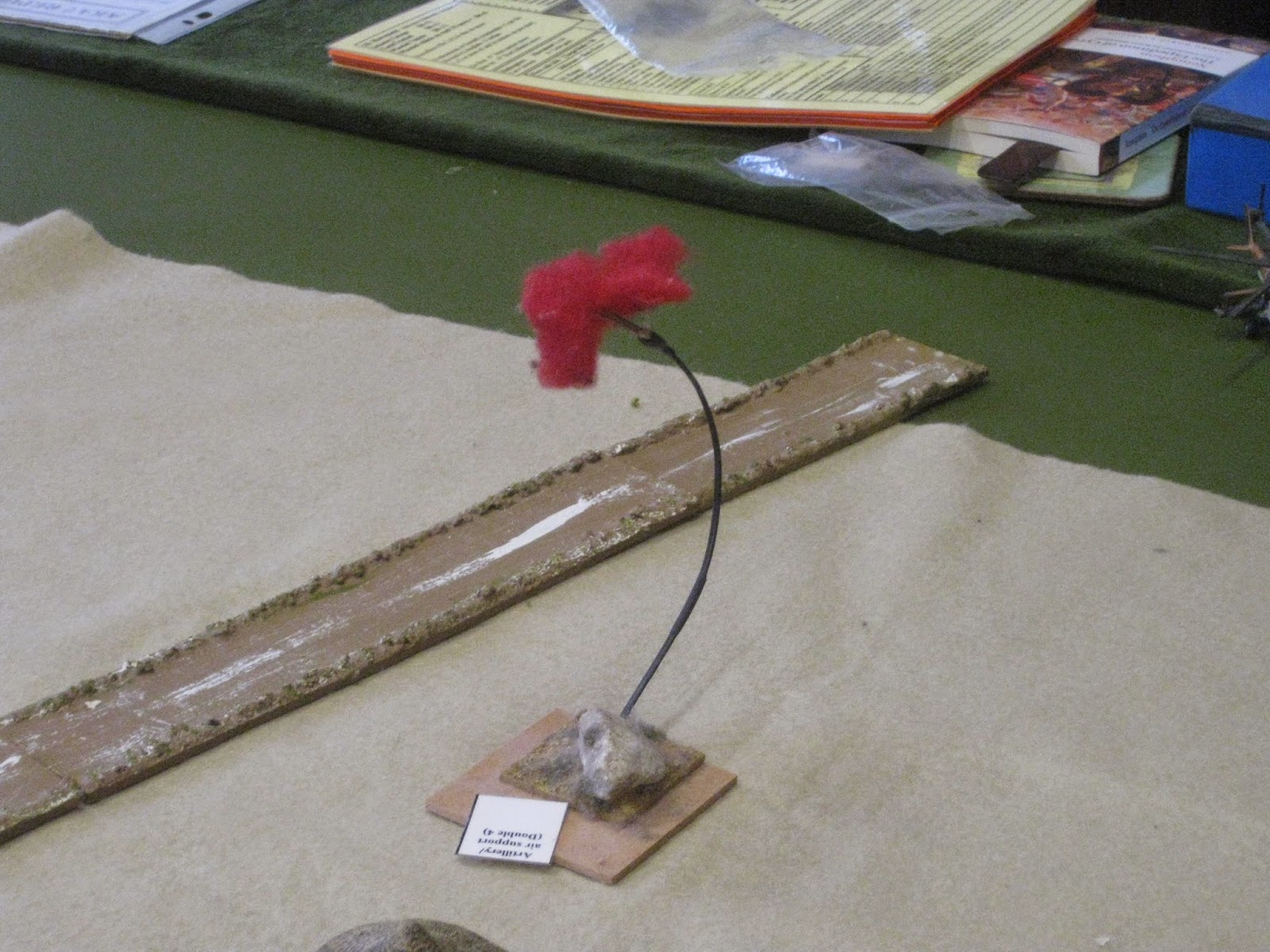 Next  move I hit the helicopter again, but due to rolling a "1" for movement it didn't get a saving roll. Phil took it really well. Honest. 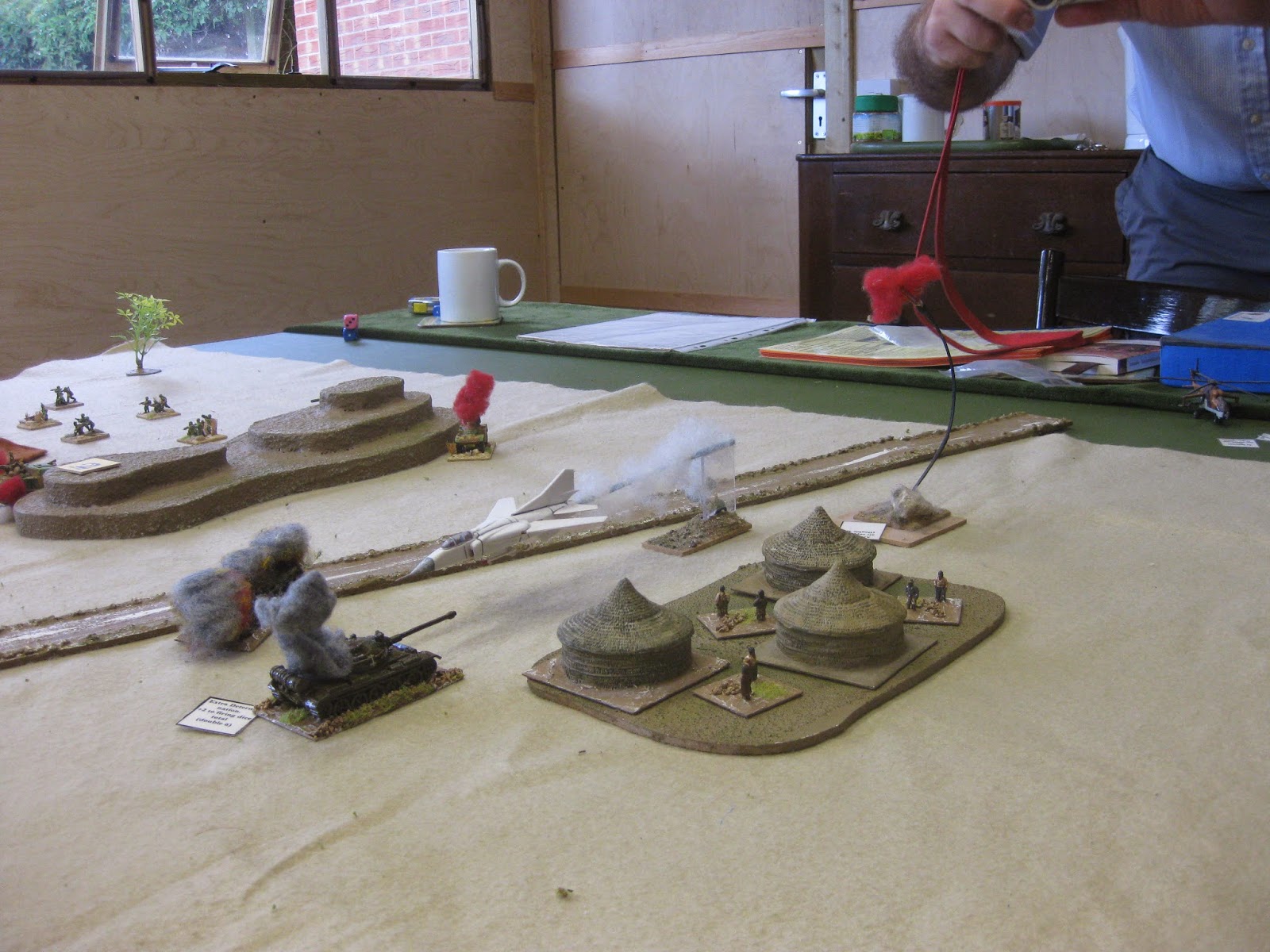 He also got some revenge by taking out one of my tanks with an airstrike. 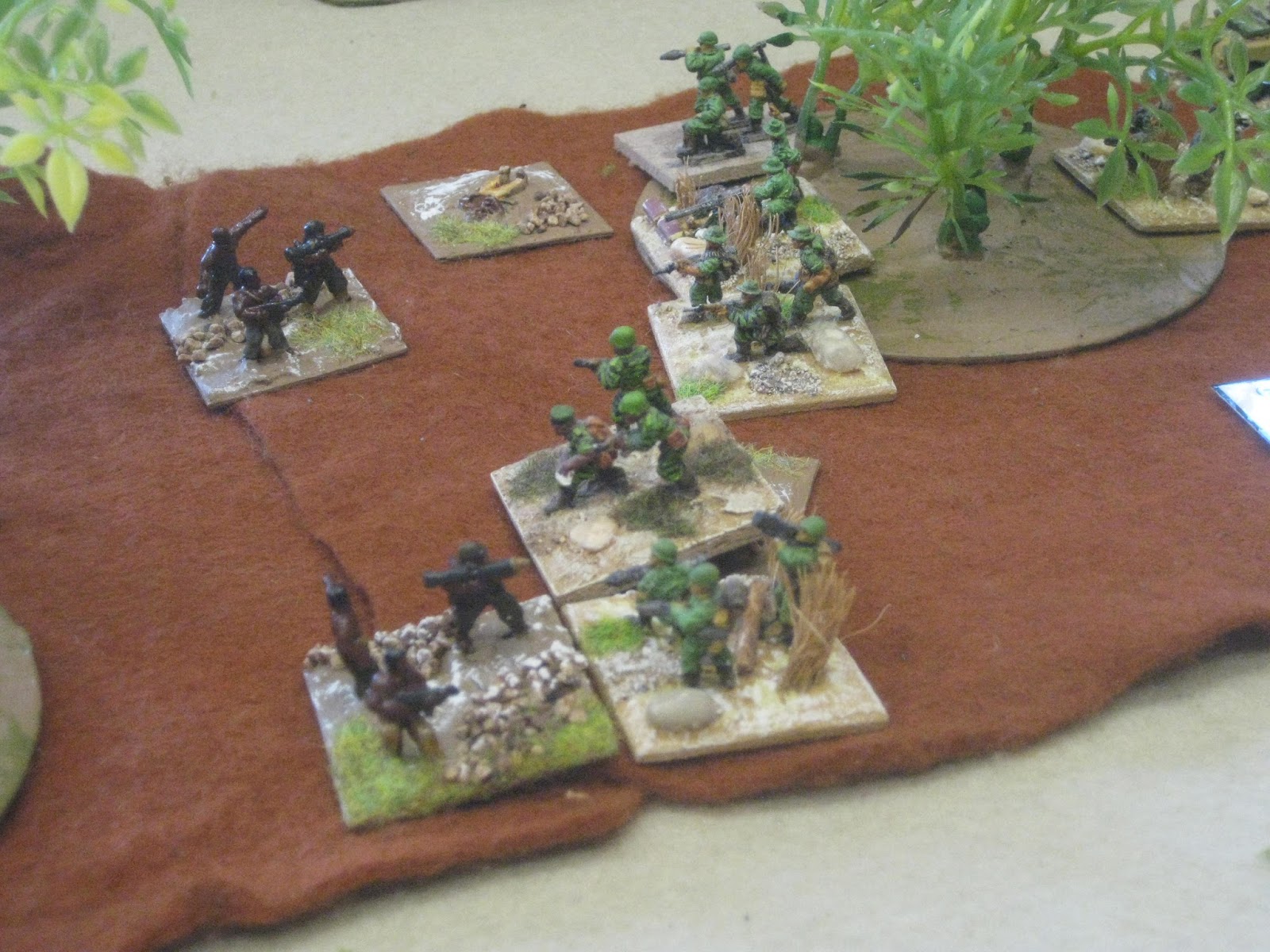 In the scrub land the infantry were going at it tooth and nail. Lots of close assault and RPGs failing to fire. Both units now had a General in attendance which helped with morale. Unless you were Phil, rolling a series of 1s. 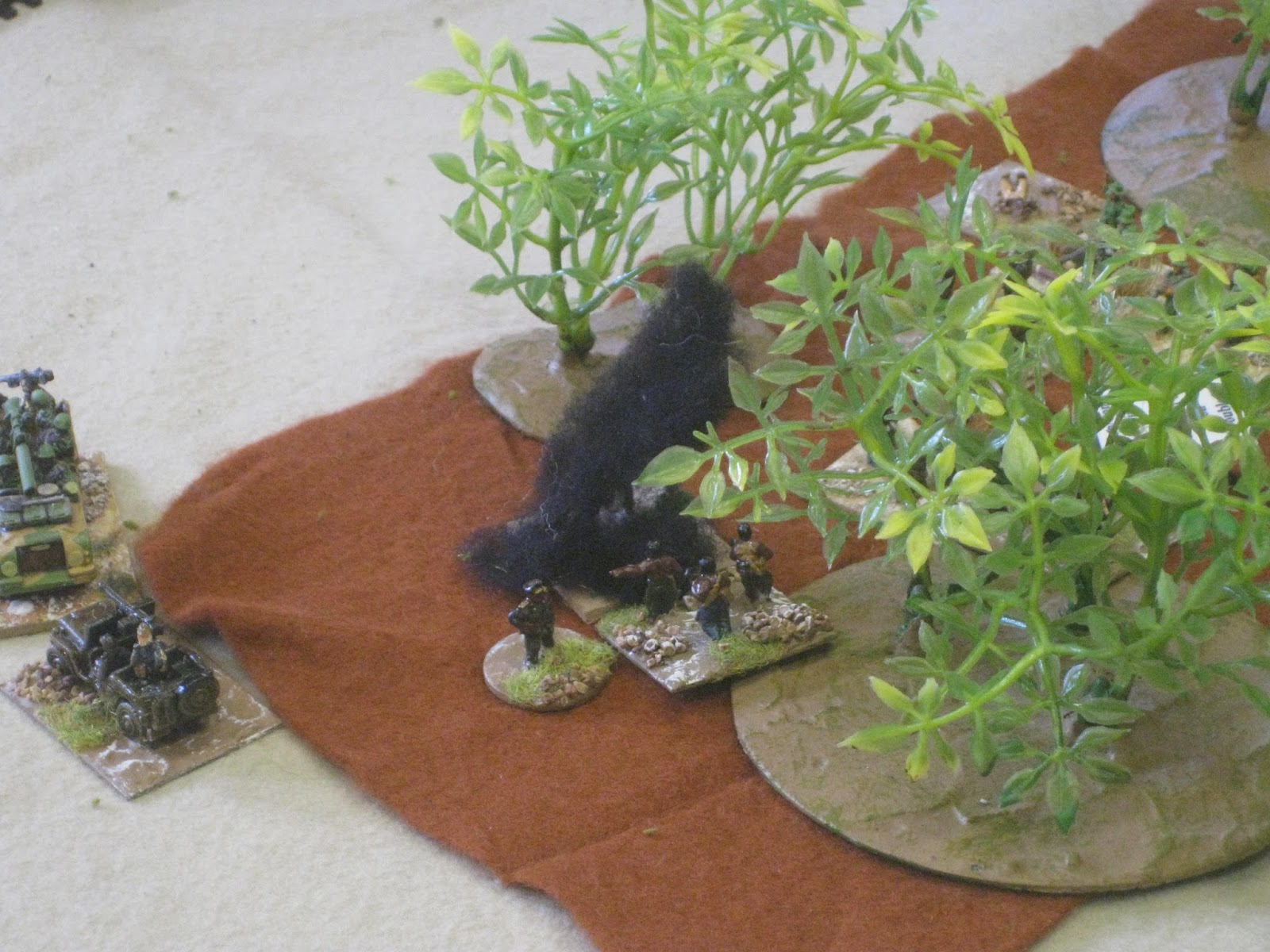 I was not doing very well in the exchanges. This shot shows me actually pinning an enemy infantry base. It's also the turn before.... 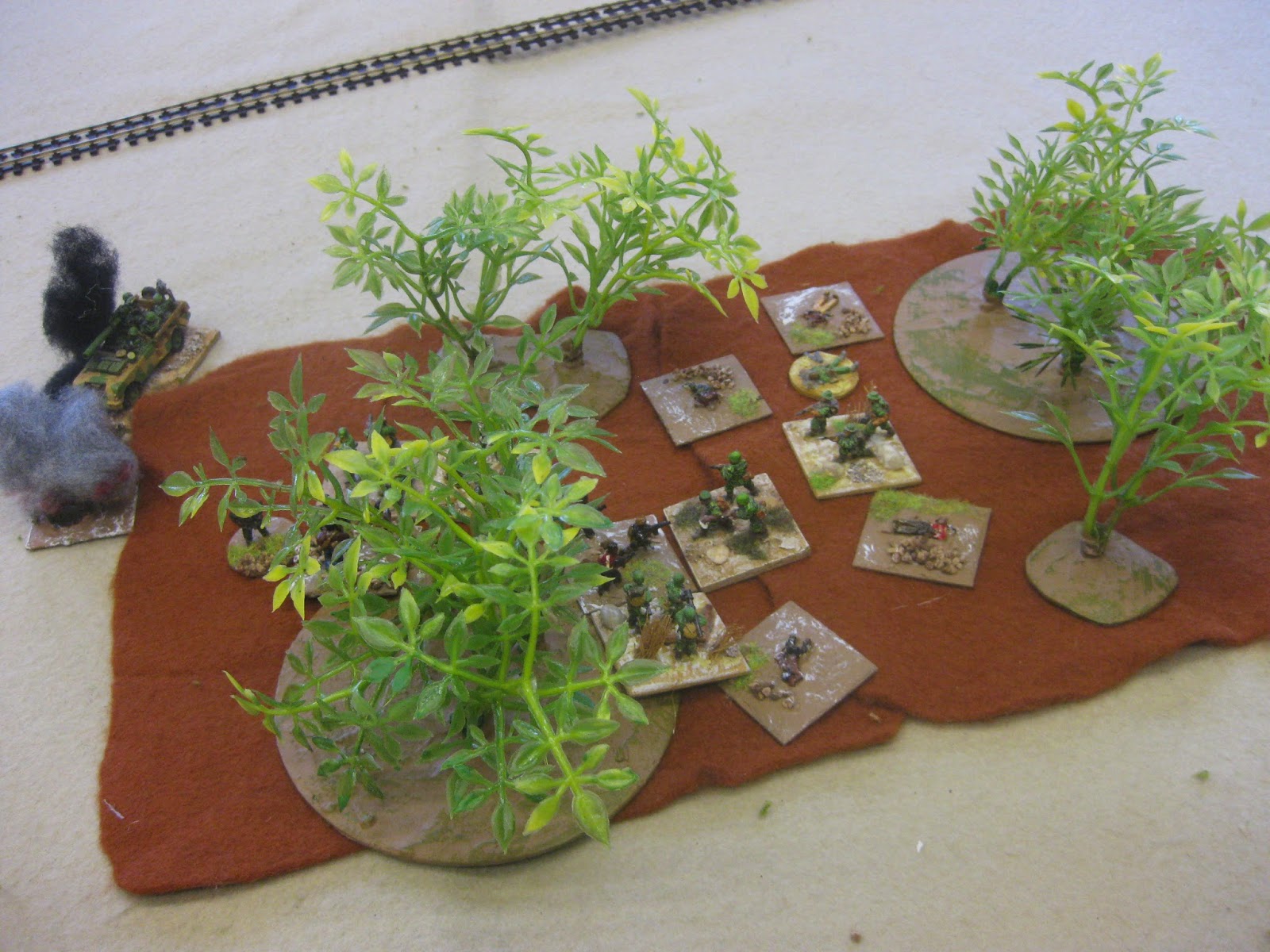 ...the two units' supporting weapons vehicles blew each other up. Terrific. 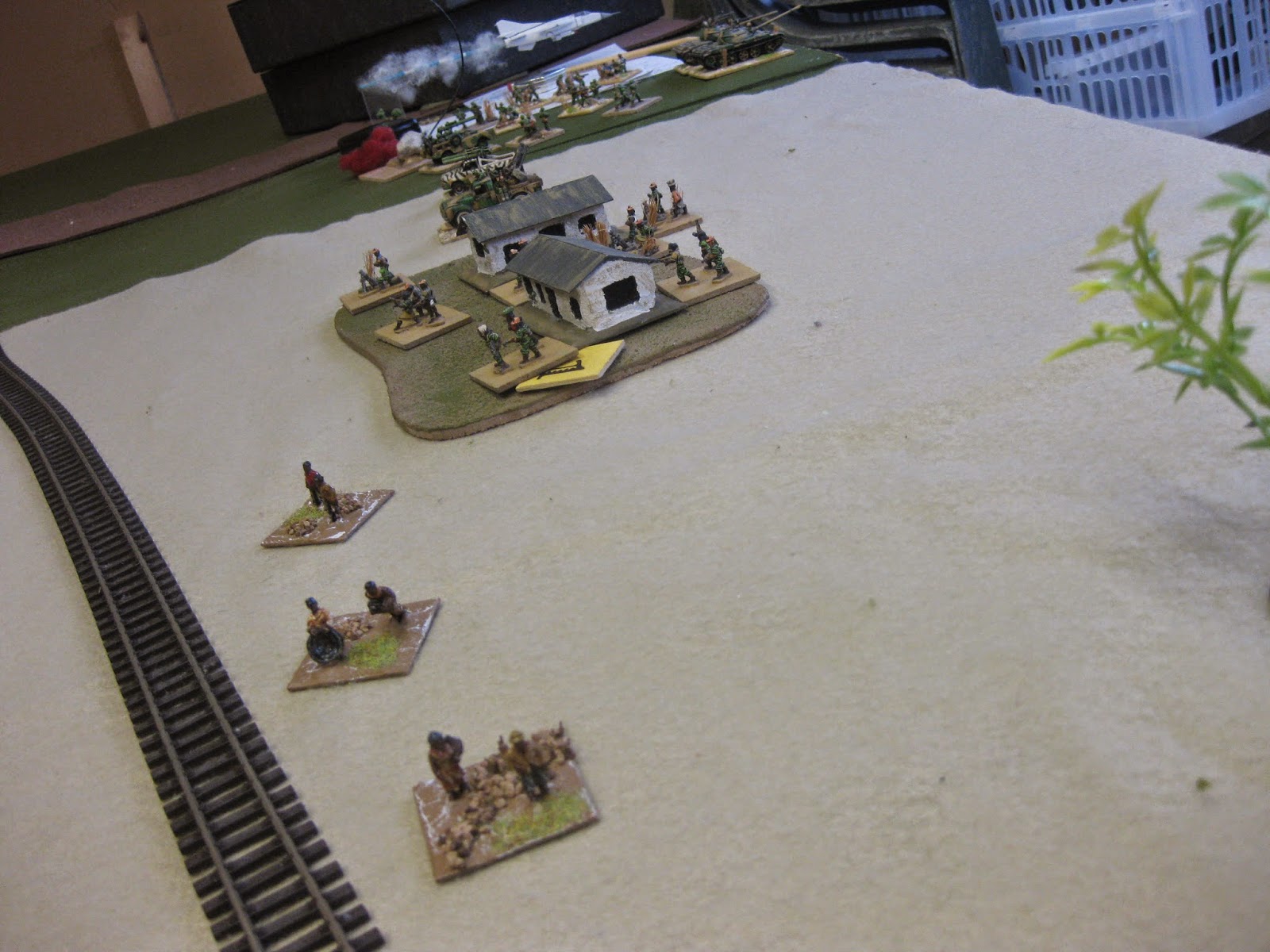 Phil by this point had some late arrivals on the table, and had occupied the aid station. This prompted a flood of refugees. 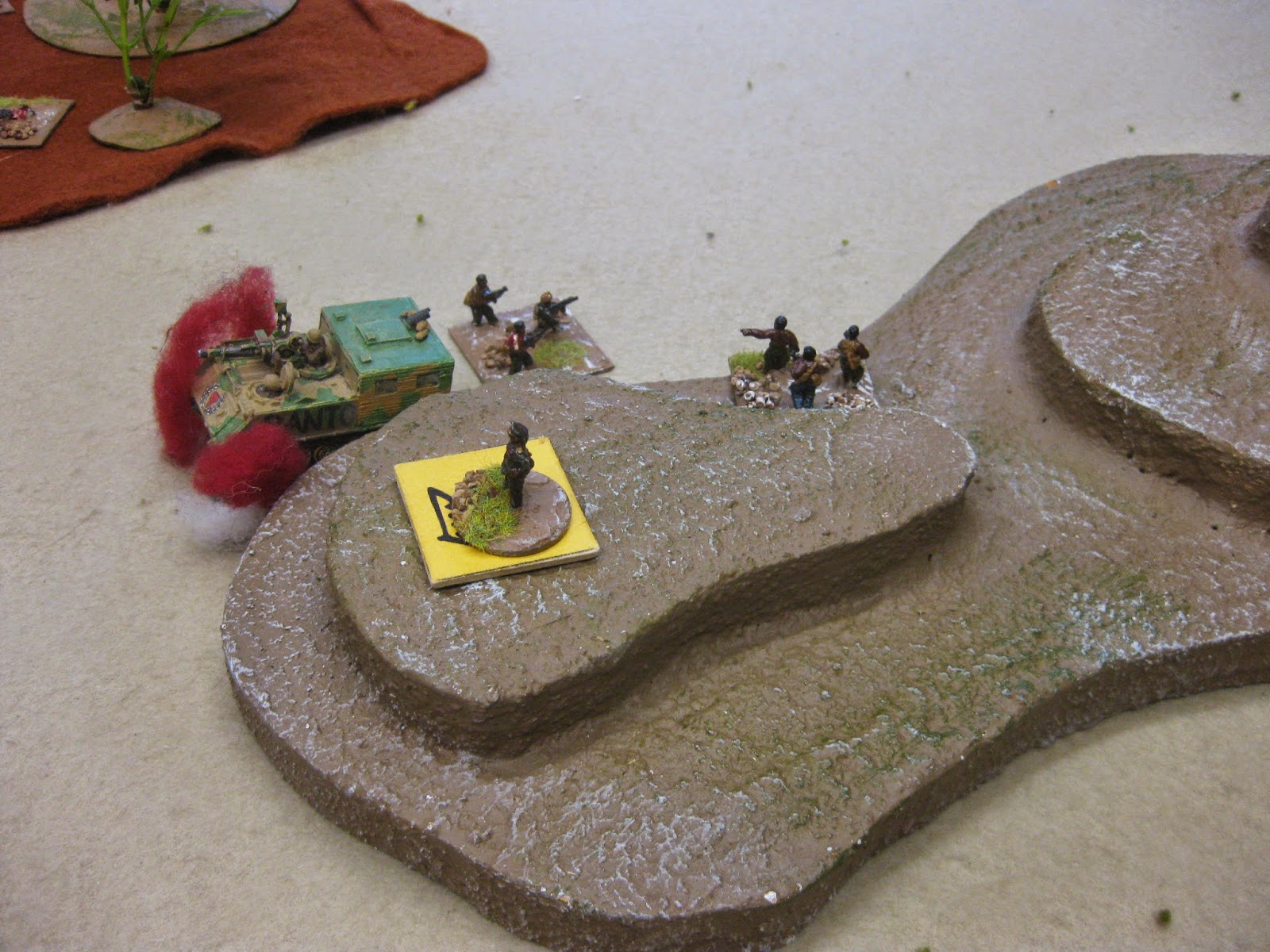 Phil's infantry in the scrub failed a third morale test and broke, allowing my General to take the high ground.

There was some more argy-bargy at the other end of the table, but I succeeded in seizing another objective just before the game ended.

I ended out winning by a good margin (50 points) but the game was much closer and I'd have been in real trouble if we'd gone on another couple of turns.

Whenever I go back to "AK47 Republic" I'm struck by how fresh and exciting it still is. Sure the rules are a bit of a mess in places, but it works, and works really well. The rules are simple enough but have clever nuances. It is a work of genius. I would be so proud of it if I had written it.

As a footnote I saw on TMP that "AK47 Republic" was listed as one of the games that a contributor wouldn't play for some moral reason (too close to today's news was the reason). In a hobby where people have SS units etc etc and will play games set elsewhere featuring modern armies I have never seen the problem. Without it I'd never have done the reading and research I did on modern Africa and my understanding of that part of the world would be so much worse.

Still, each to his own, I guess.