You will recall that on Parataikene Day we also played a War of Spanish Succession game put on by Richard Lockwood. The rules were his own, written in a coffee shop on his way here. We liked what they were doing and he sent me a copy and also the results of some further playtesting. It only remained for us to give them another go.

I had to make a few quick changes, - Richard's armies are 15mm with eight company bases to a battalion. Mine are 20mm with three elements. Pretty much identical really. 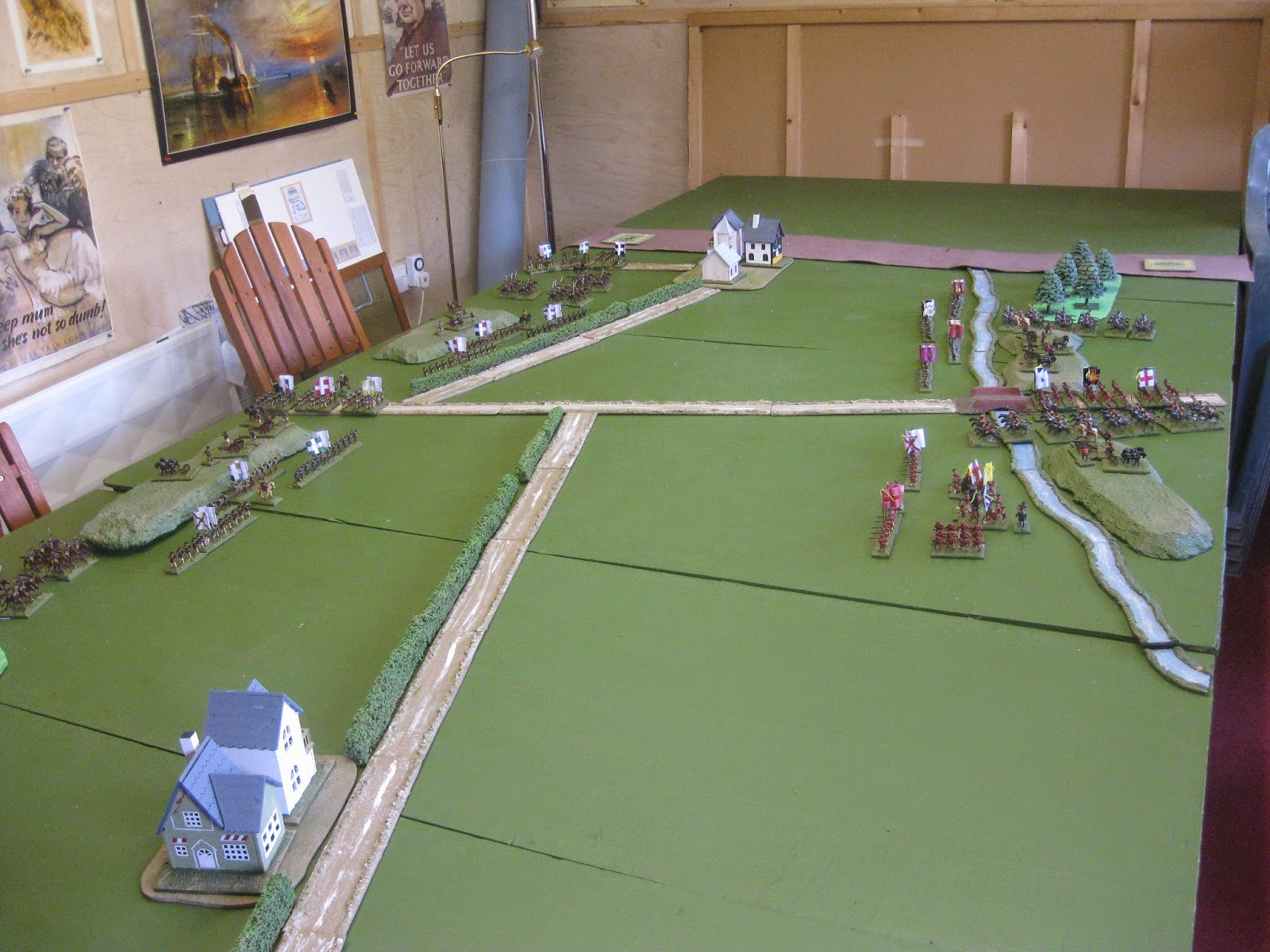 I threw some European looking terrain on the table, and deployed everything I had. Anglo-Dutch are to the right, French to the left. The Anglo-Dutch are effecting a river crossing and trying to capture the road junction. The French are trying to stop them. 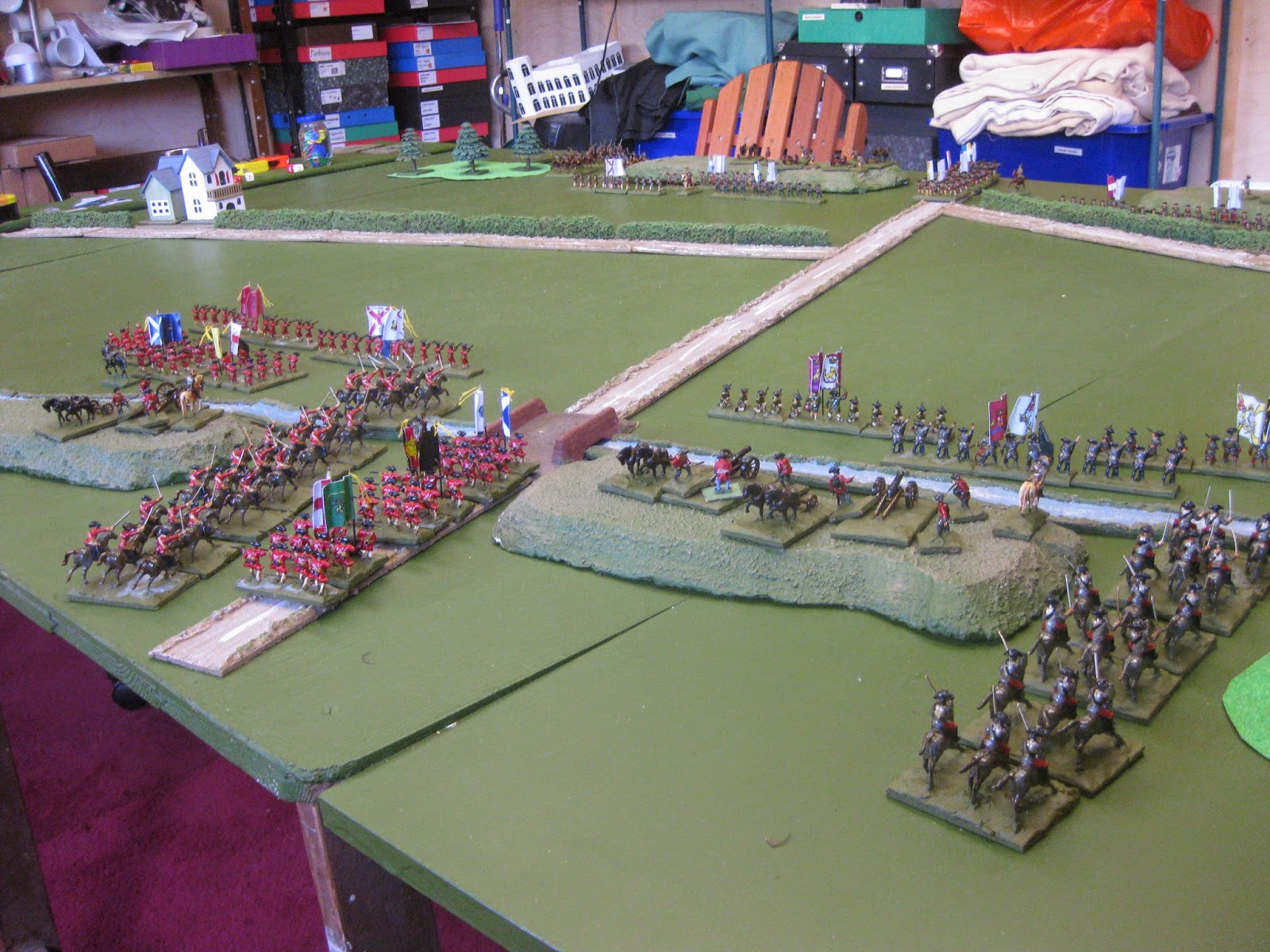 This is just another gratuitous shot of some of my figures. 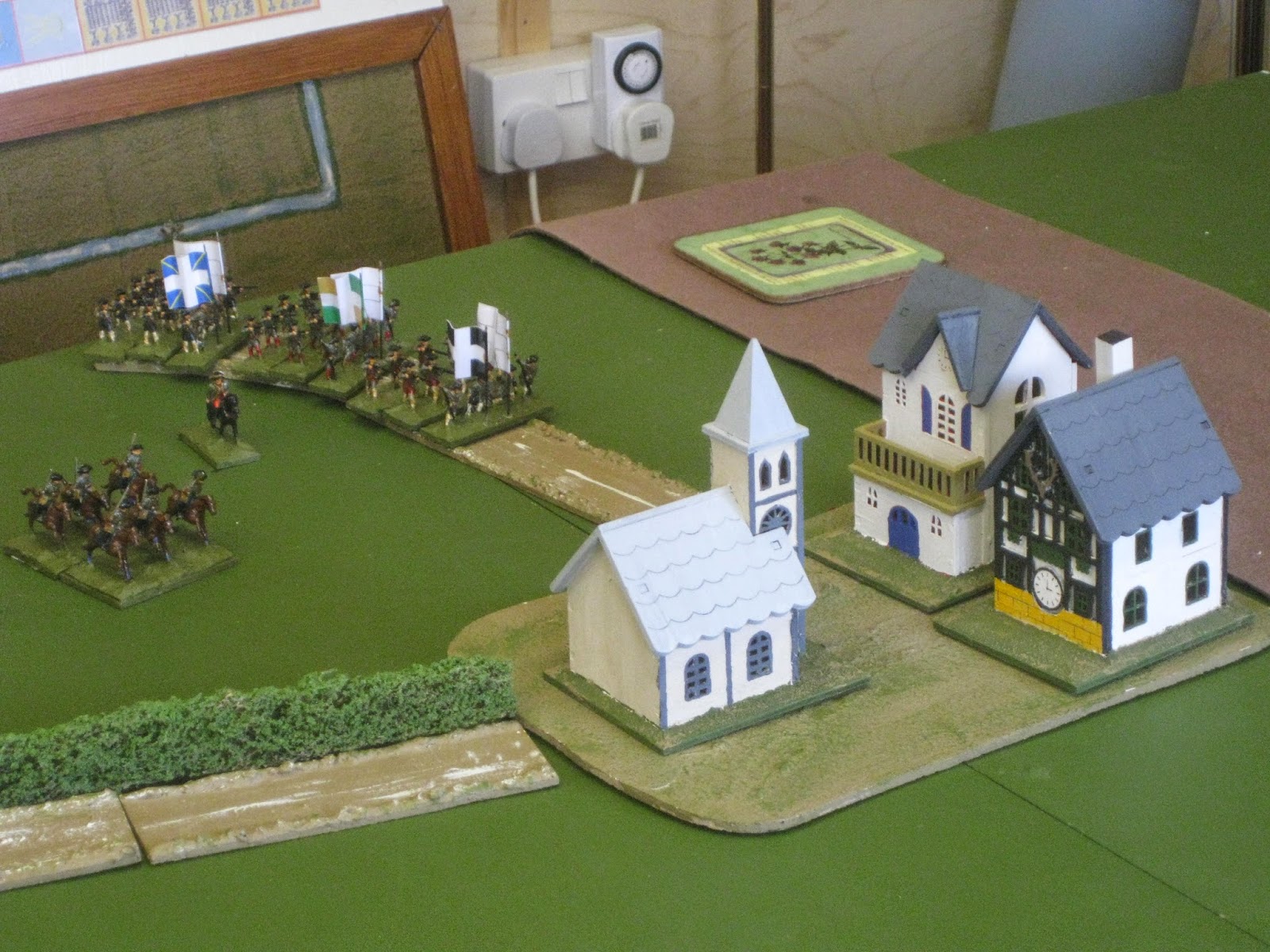 Phil arrived and took the Anglo-Dutch, so I got the French. In classic WSS fashion I immediately despatched three battalions of foot to occupy the village. If you are interested in where the buildings came from you only have to ask. 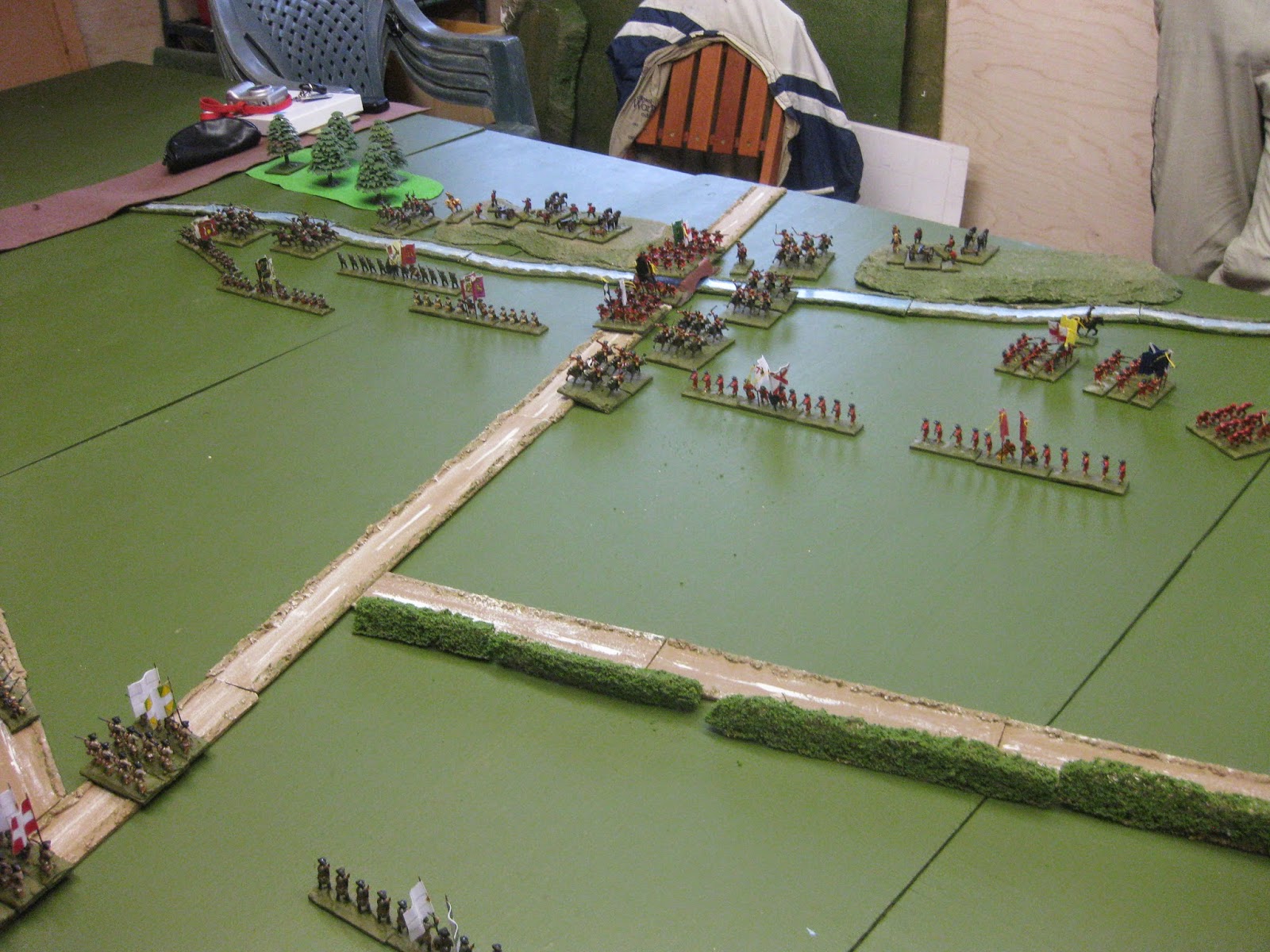 Phil boldly advanced down the road, pushing his cavalry ahead to try to catch me before I deployed. 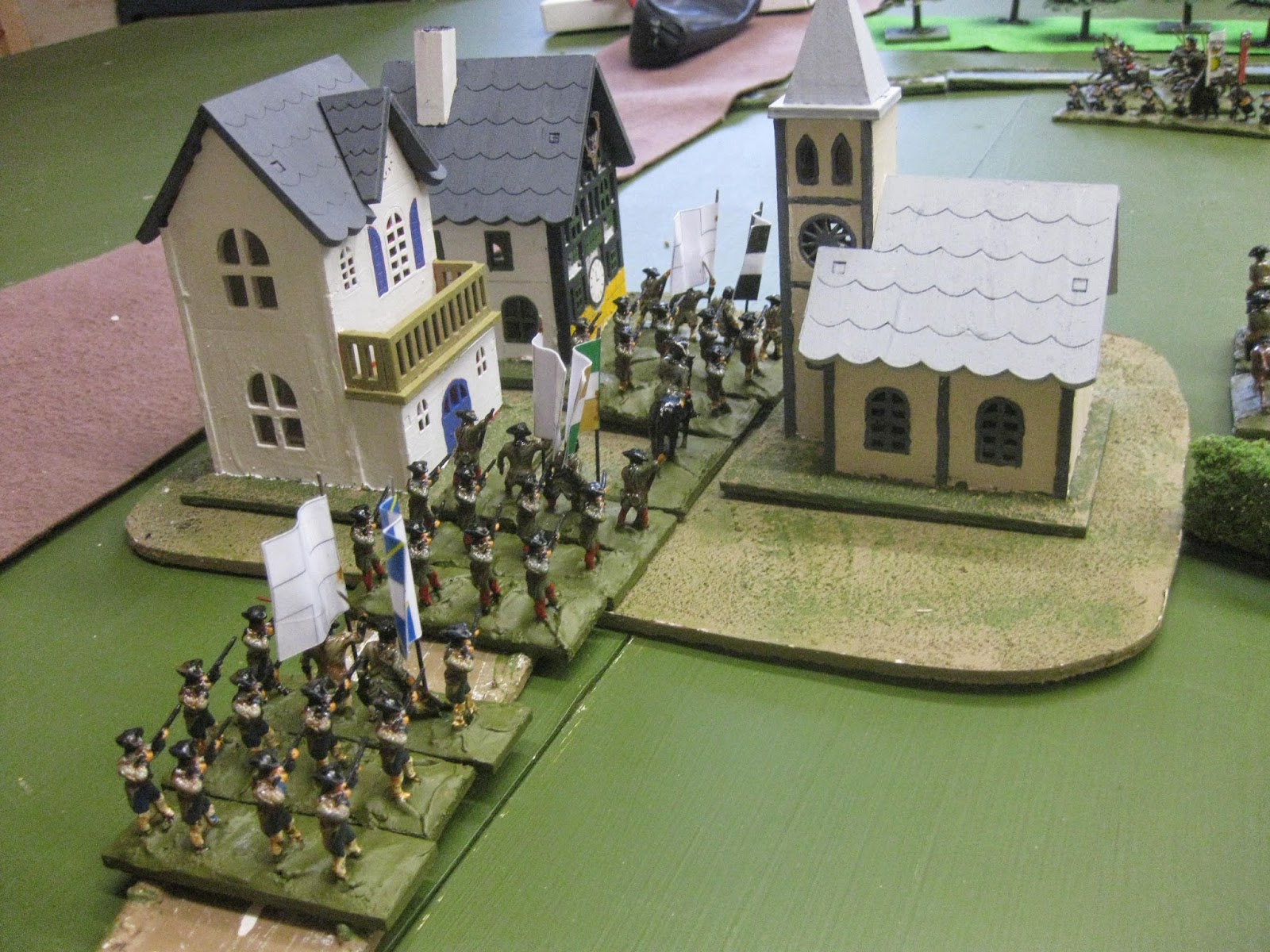 I started to occupy the village on my left. 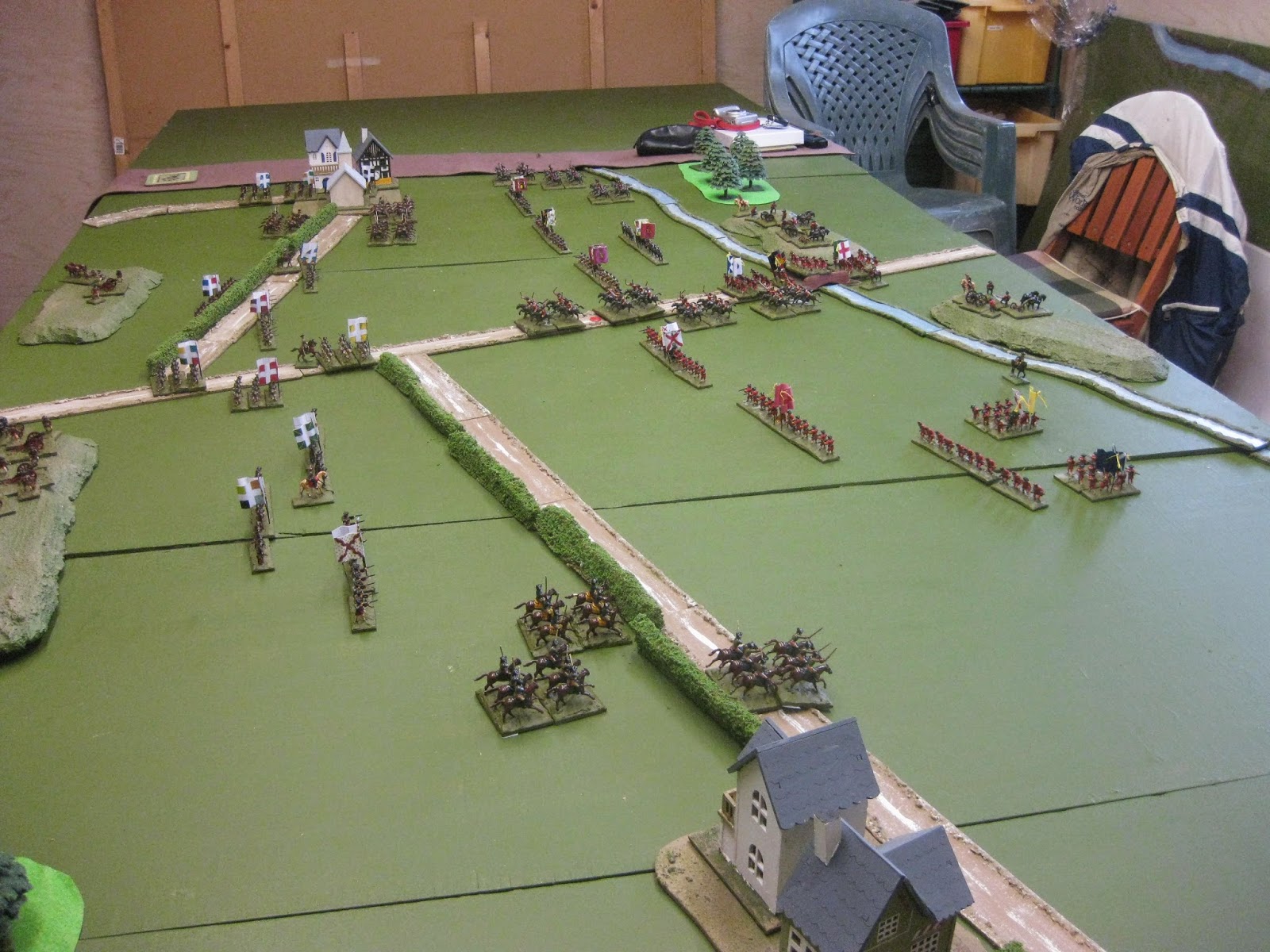 As we advanced towards each other I congratulated myself on how nice my 30 year old Airfix conversions look. Thanks to Pete Berry of Baccus for talking me into doing this army when I was a student so he had an opponent for his GNW Swedes. It has been re-painted and varnished since then, and given new flags, but it's still the same army to me. 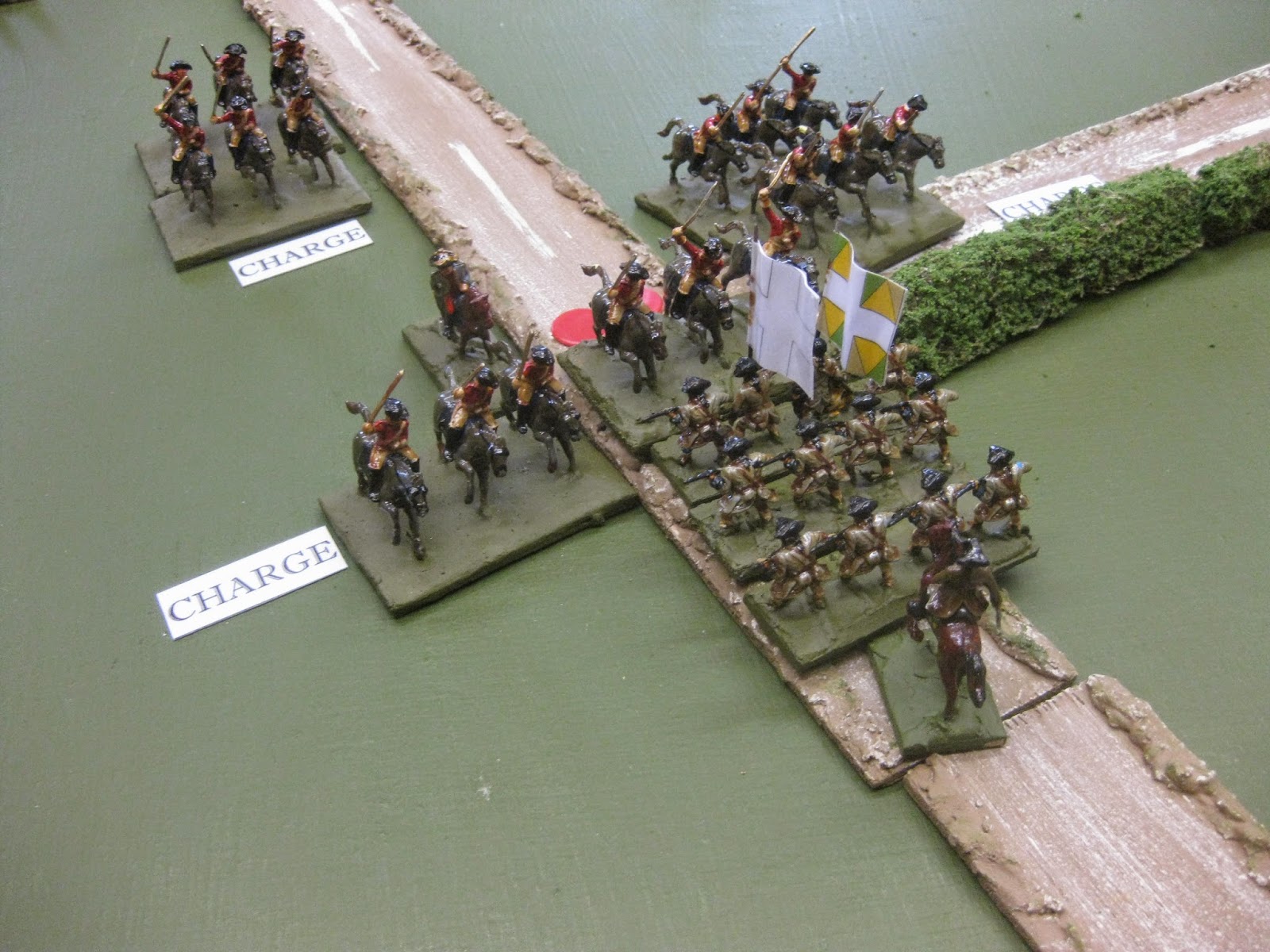 Phil seized the initiative at the appropriate point for him and charged headlong into the front of my infantry column advancing up the road (yup, get me before I deployed). The red counter indicates I have inflicted a "Disruption Point" (DP) on him with my musketry as he came in. Cue discussion on what should be happening as this didn't happen in the previous game. I argued for my column being a bit like a square mainly because I didn't want to lose the game this early. Phil was too polite to push the point. 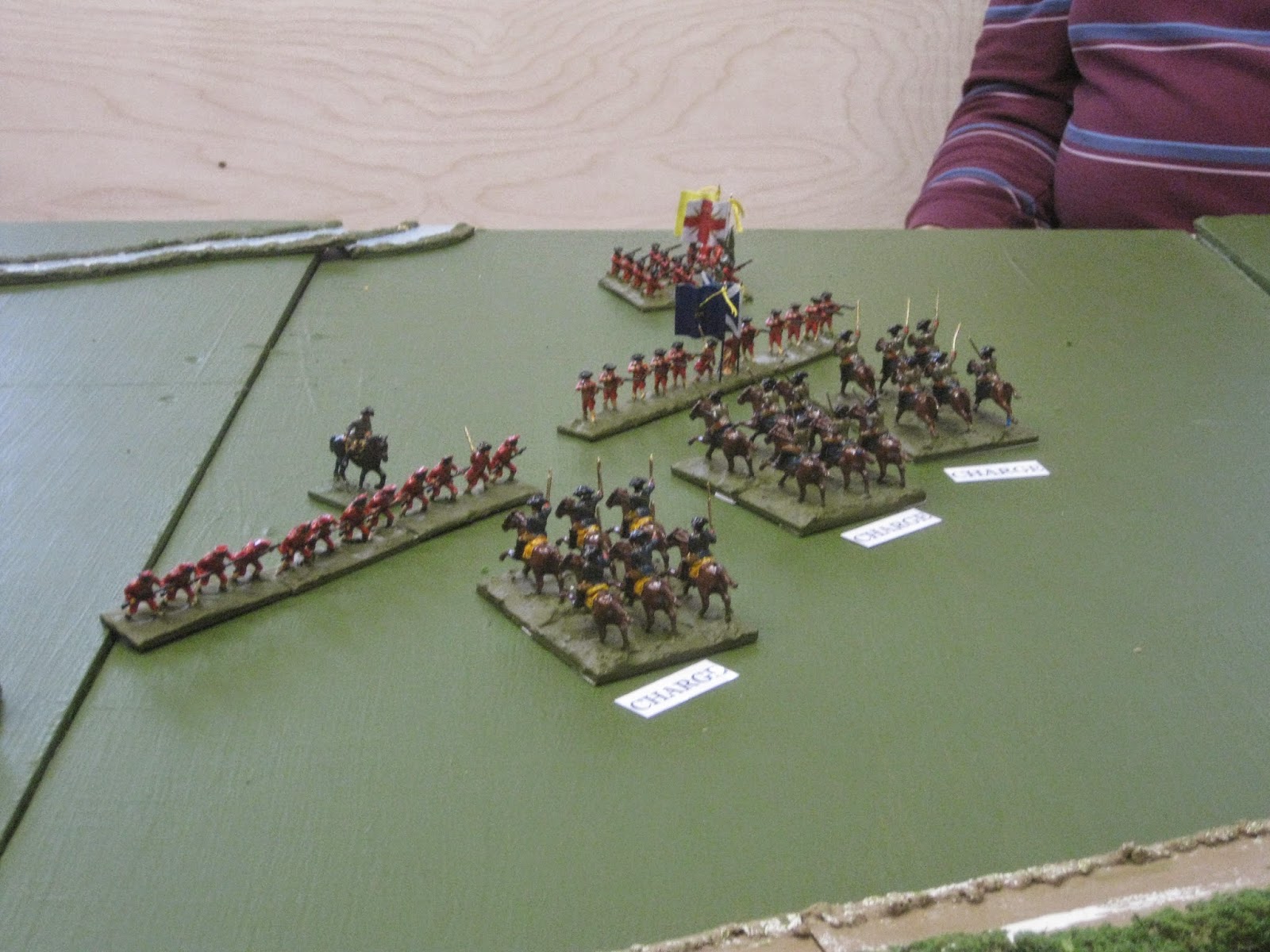 On my right flank I launched a charge with my horse against Phil's flank guard infantry. More of that later. 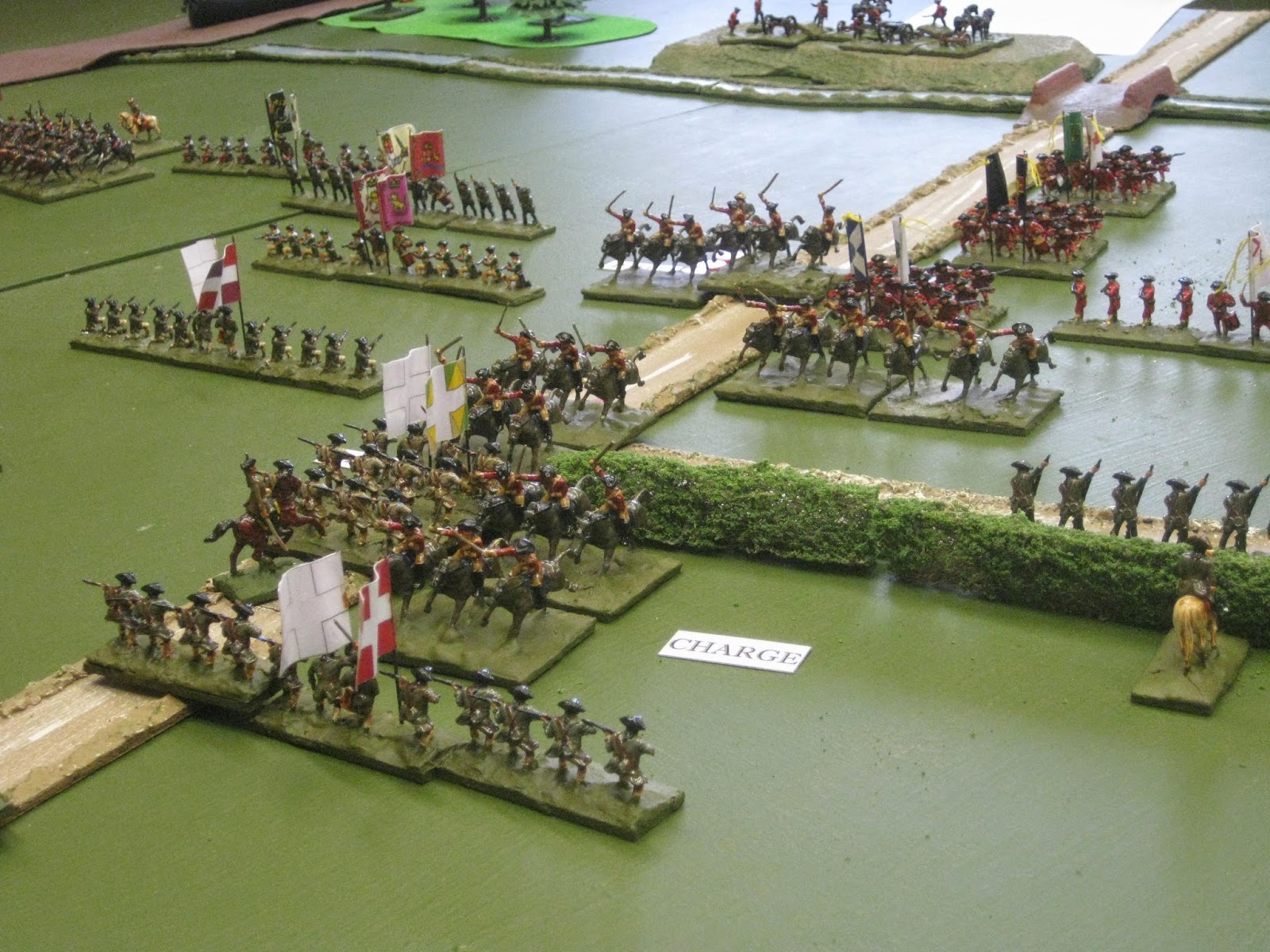 My remaining infantry moved up and deployed as Phil charged more cavalry at my centre. Don't know what I expected in the game, but it wasn't this (when I set the figures up I was intending, as the Anglo-Dutch, to weaken the French centre with my infantry then bust it open with well timed cavalry charges). 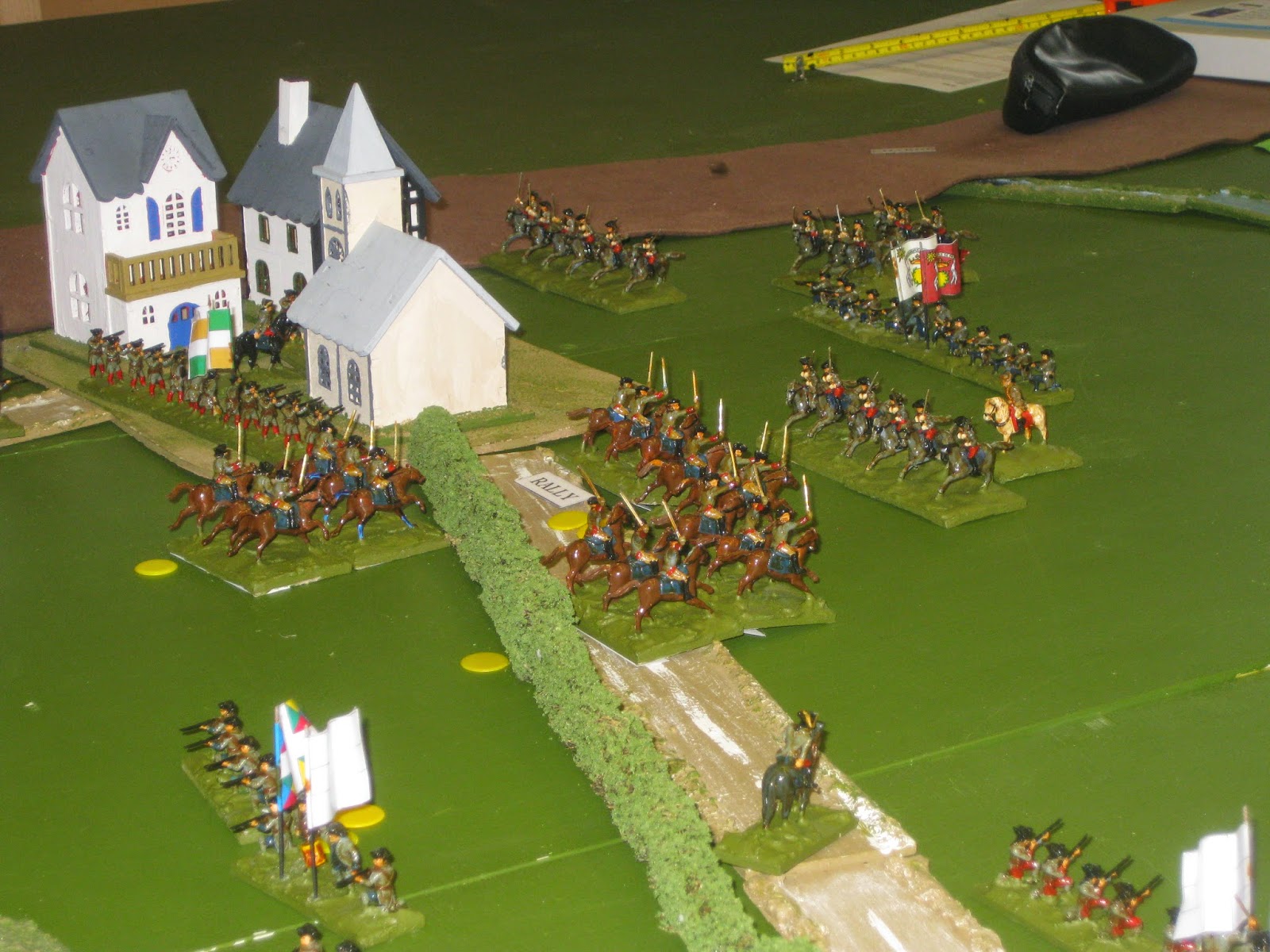 The village on my left sees cavalry swirl round it. Phil has charged down the main street (out of picture) and I'm pinning his infantry with my cavalry. As you can see it is costing me some DPs. 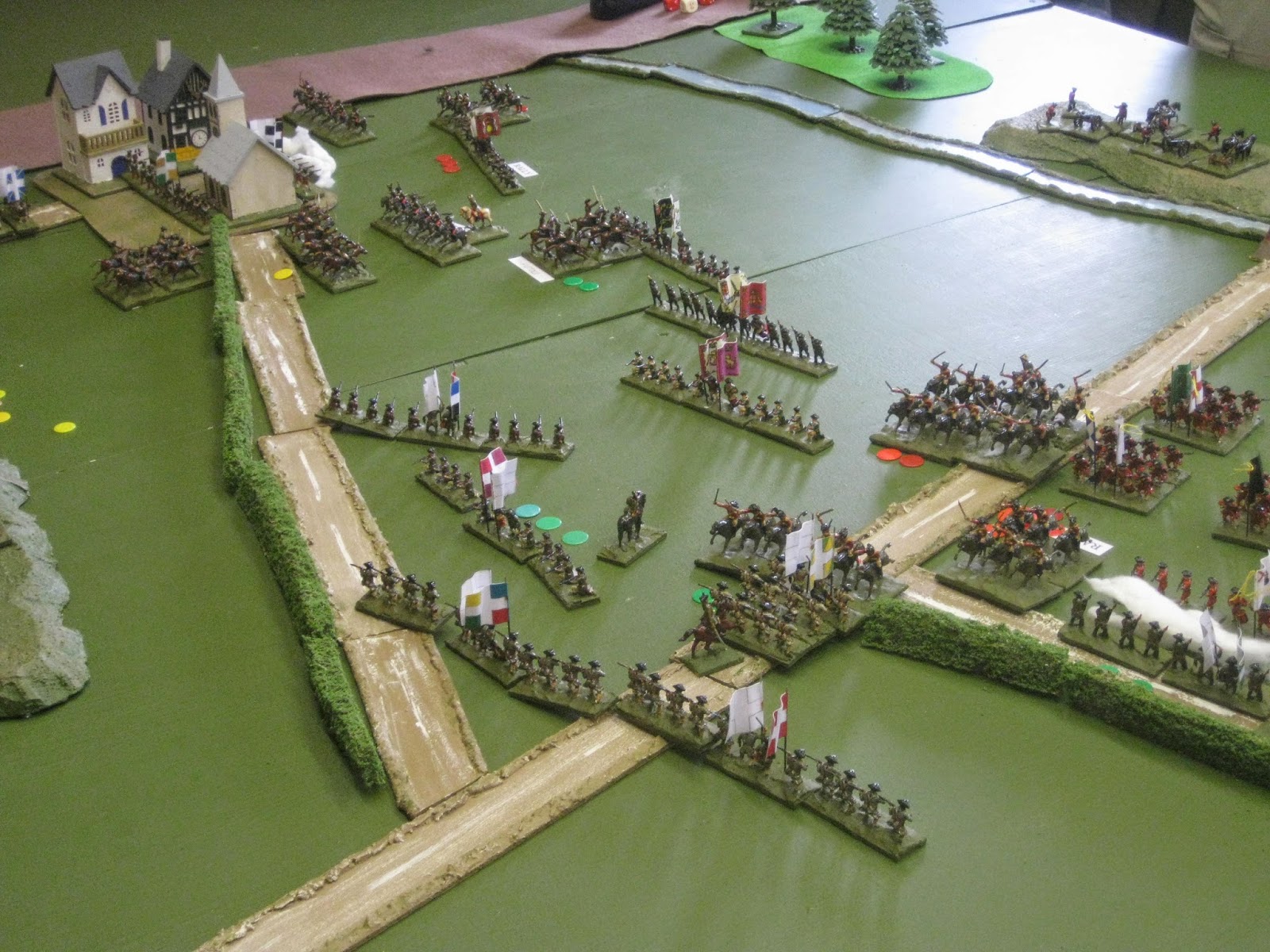 The combat across the centre has become more generalised, with infantry firefights breaking out. One of my battalions has broken, failing a die roll against its DPs. You can see the yellow trail of shame off to the left. My infantry in the centre are holding on against the cavalry, due to the efforts of the brigadier attached to them. Another one of my units, the one with three green DP markers, also fails a die roll against them and beats a hasty retreat. Dammit. 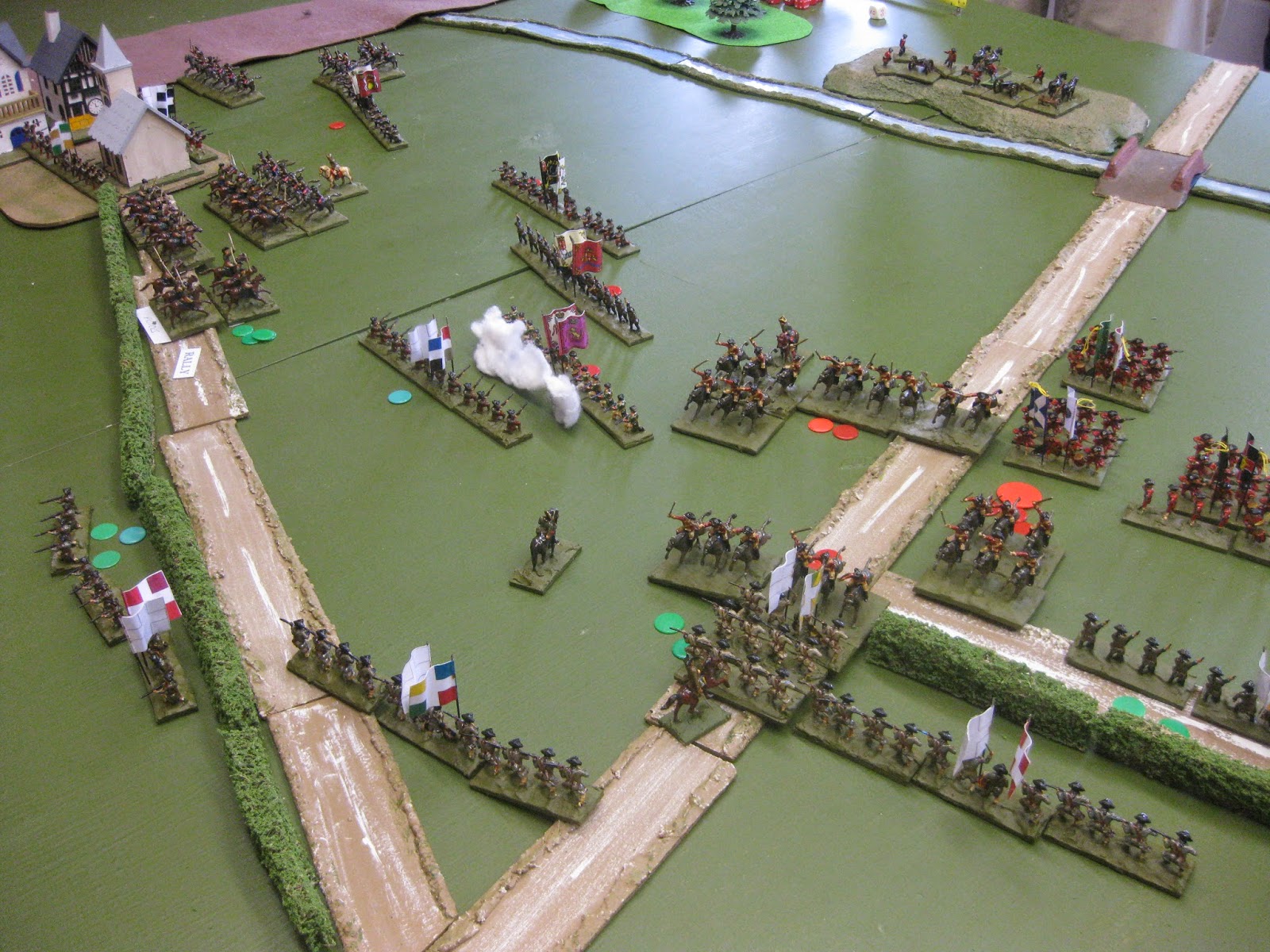 I have to move some more units up to plug the hole. Luckily Phil's cavalry is fairly tied down, so can't get at me. 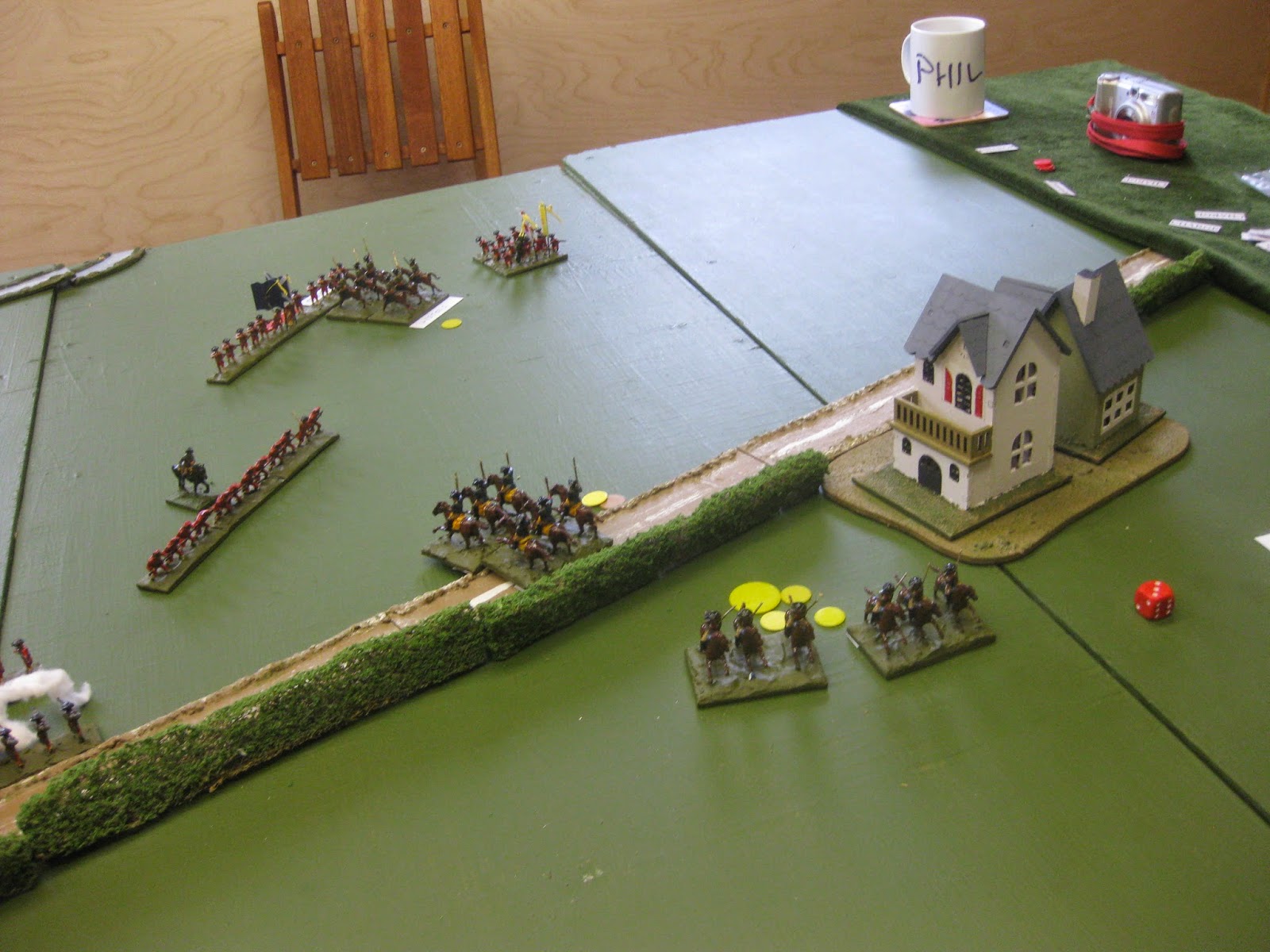 I'm light a few pictures on this flank, but the cavalry attack didn't go well, with two out of three units being forced to retire. The remaining unit is still stuck in and doing okay, despite being pistoleers rather than hard charging cavalry.

We ended the game at this point as we had run out of time. It was all looking a bit sticky for me, and another half an hour would probably have seen me retiring en-masse.

Richard's rules were basically one side of A4 so were never going to answer every question we had, so lots of notes were taken. Having said that it was a known work-in-progress when we started. The DP mechanism with the associated recovery process and outcome moves works very well. The core of the system is solid. What Richard needs to do is work his ideas up into a full set of rules, filling in the gaps and hopefully not losing what makes them fun.

Another enjoyable afternoon's game.
Posted by Trebian at 13:39