Pride goeth before a fall and a haughty spirit before destruction, as the proverb goes.

A Wednesday re-match of Assyrians and Babylonians. Will took the Assyrians this time, and I increased the size of the armies (well, no point in leaving toys in the box unnecessarily, is there?). 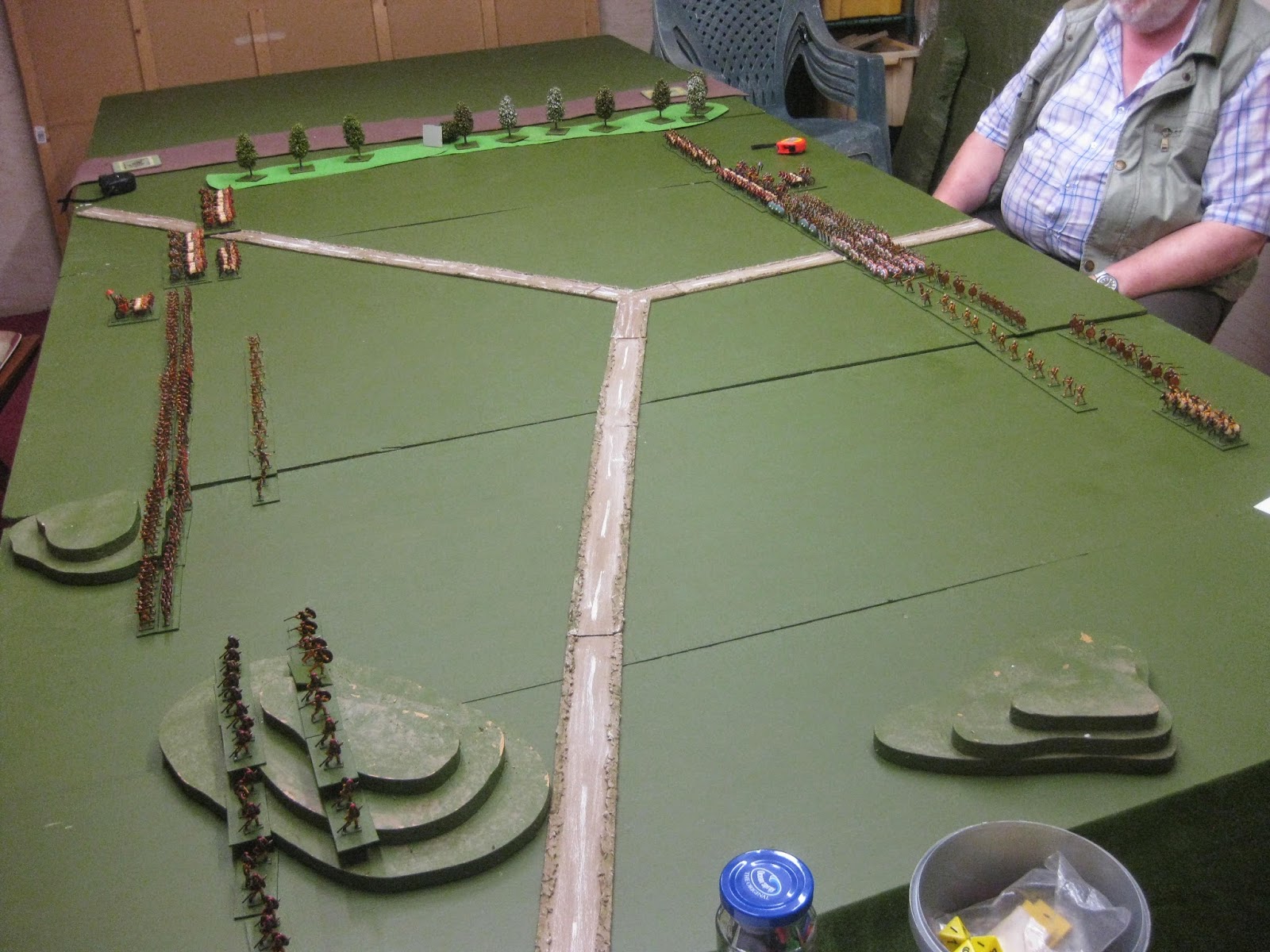 The big plan this time was to refuse my right with a load of light infantry and pack the left with my chariots and cavalry. In the middle a screen of skirmishing archers would inflict a few hits on Will's superior infantry before dropping back to enable my massed archers to stick in a few vollies before contact.

Will, concerned about the trick I pulled with the chariots last week, deployed all of his heavy infantry in depth to stop me breaking him with impetus. He also had a light weight wing, opposite my right, and most of his mounted troops opposite mine. 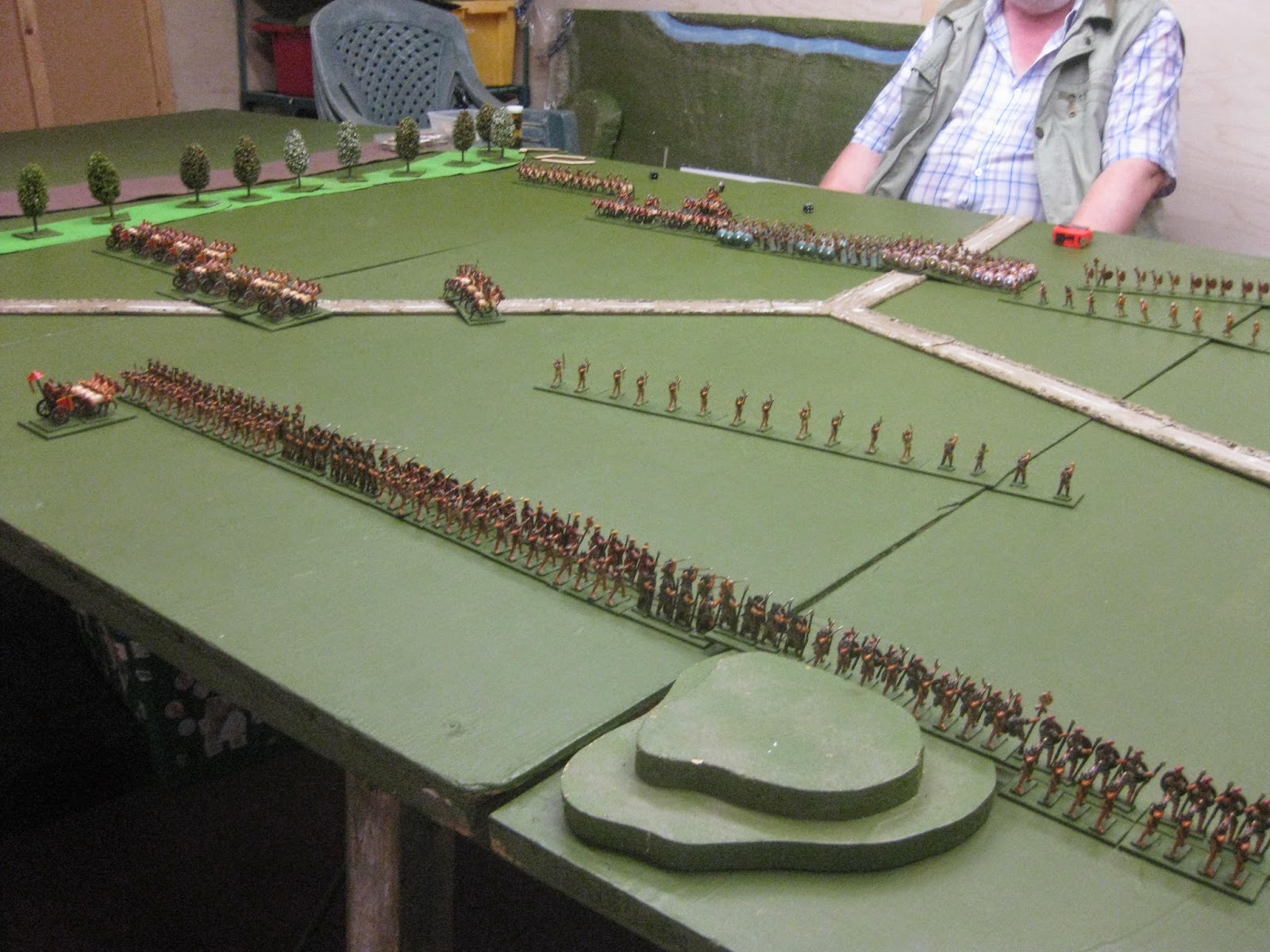 Losing the initiative roll, Will asked me to move first. I pushed up on my left held back with my heavy infantry and started to close with my light missile troops. I also made a BIG mistake. I moved my roving cavalry unit towards the centre to make room for my chariots. Alas I also moved them into archery range and took a couple of hits. The loss of this unit soon after was critical to the eventual outcome and was completely avoidable. 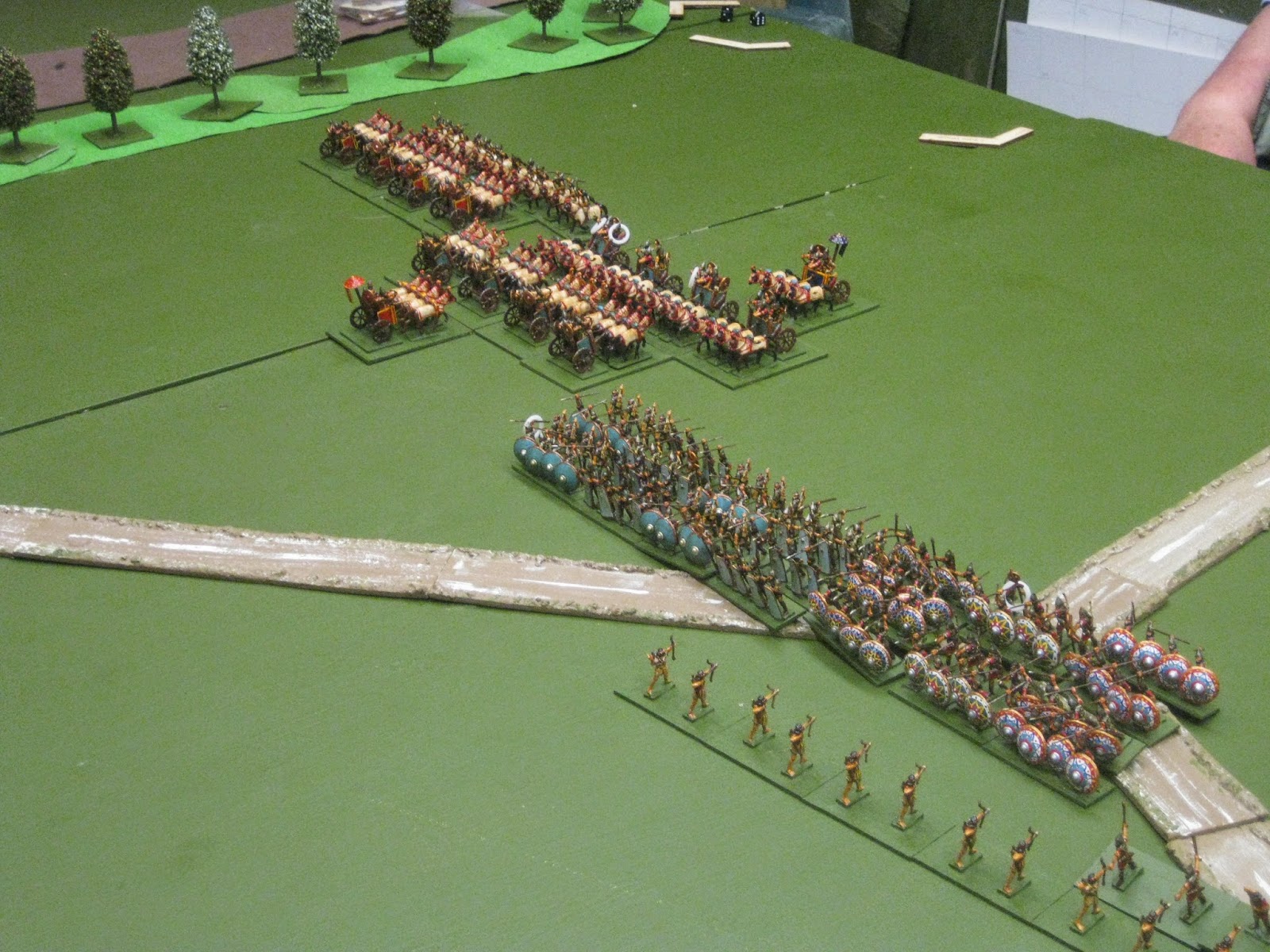 The chariots and cavalry clash. I'm on evens on one of these combats and at an advantage on all of the others. My chariots perform really well against Will's chariots, but against the cavalry where they should win they start to come unstuck.

In the middle Will's infantry close the gap. At least I start to inflict a few hits on them. I'm going to need them if the main lines ever come to blows. 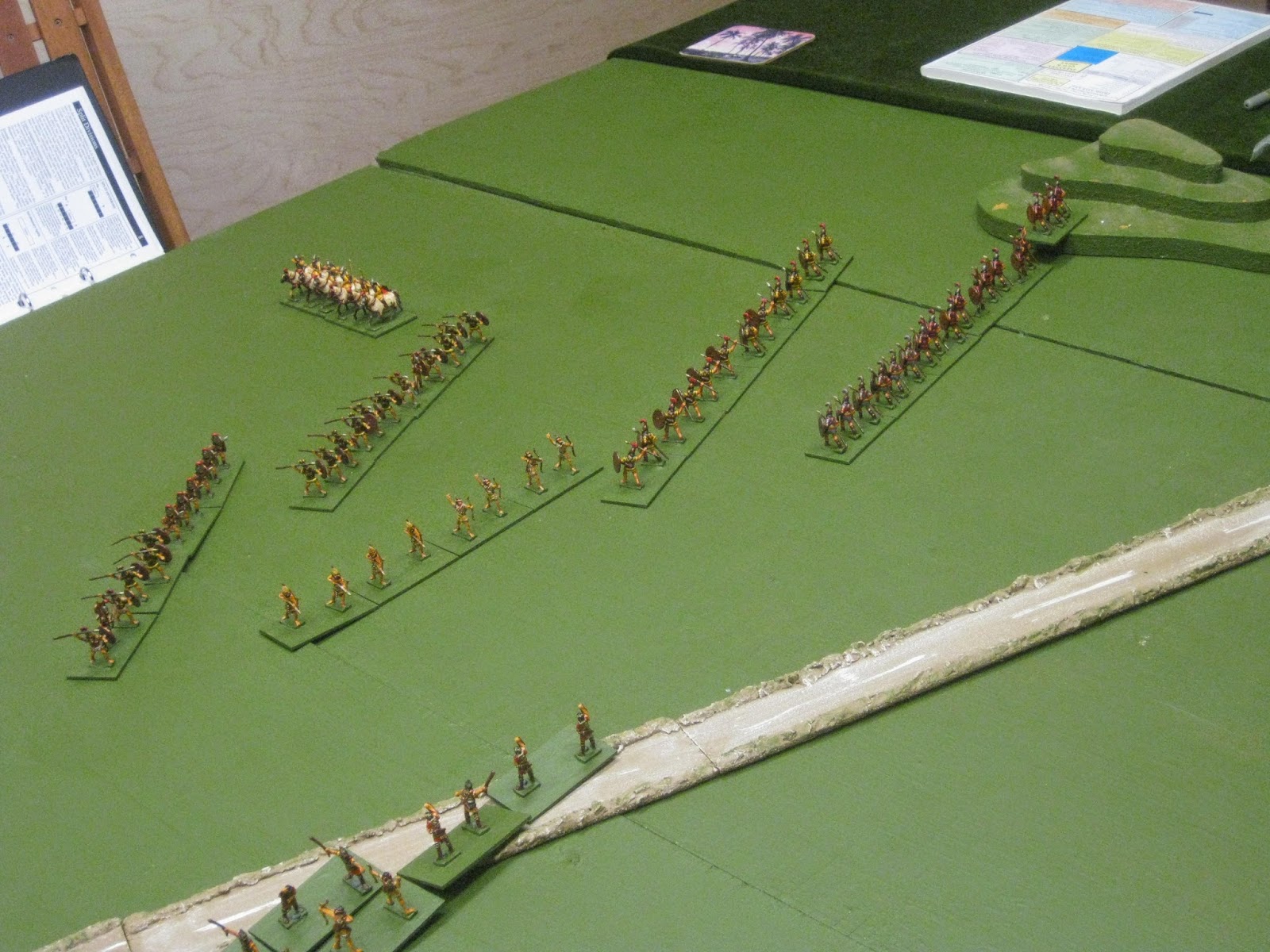 On the other wing the light infantry start to face off. This wing is a complete non-event as regards the eventual outcome, with no army break points at risk out there. 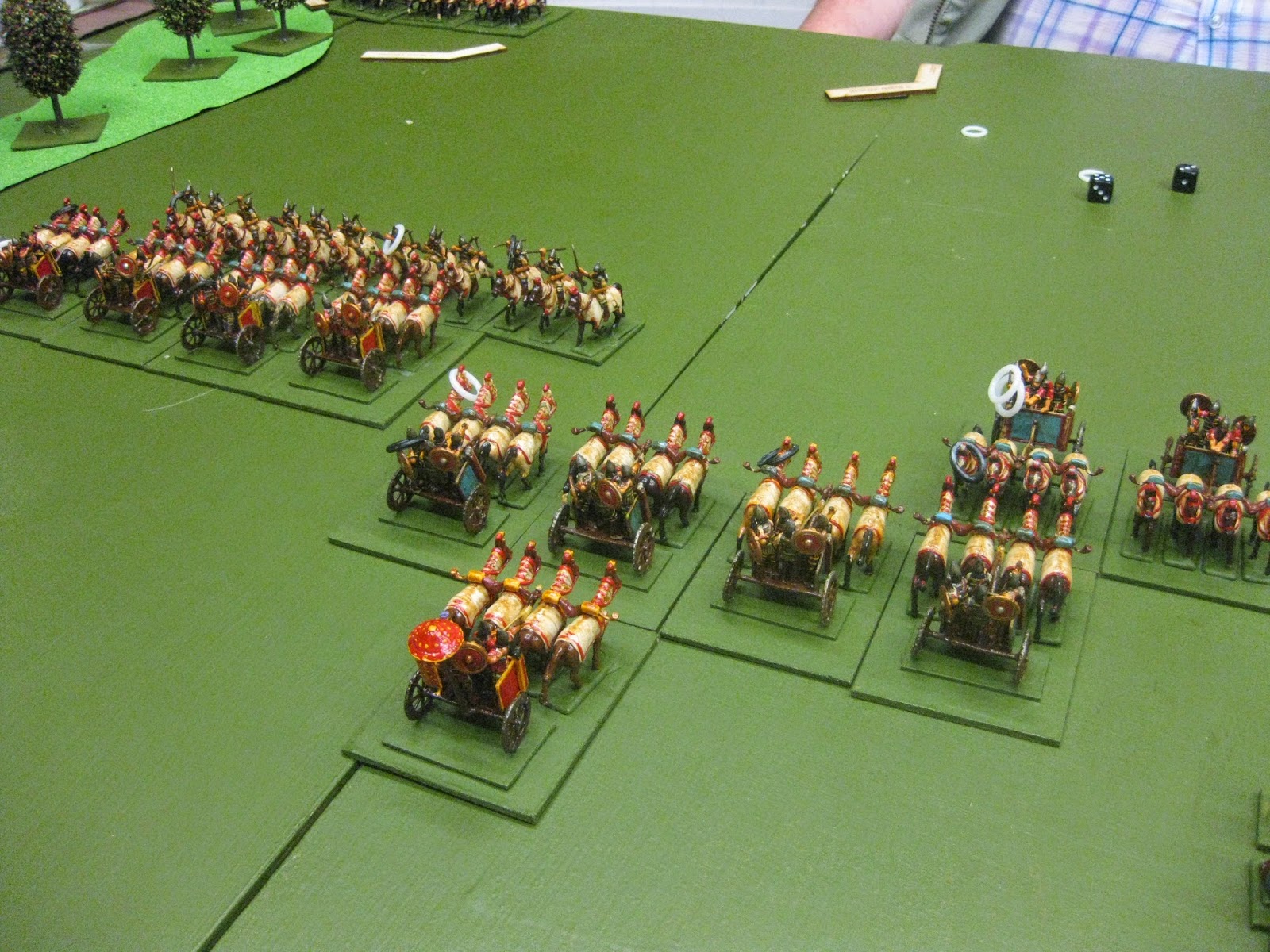 Second round of combat and I've already broken one chariot unit  and killed the general. The cavalry are still giving me problems. Part of the problem is my continuing failure to win the initiative at all. Not because I want to move first but because deciding melee direction once in a while would help. 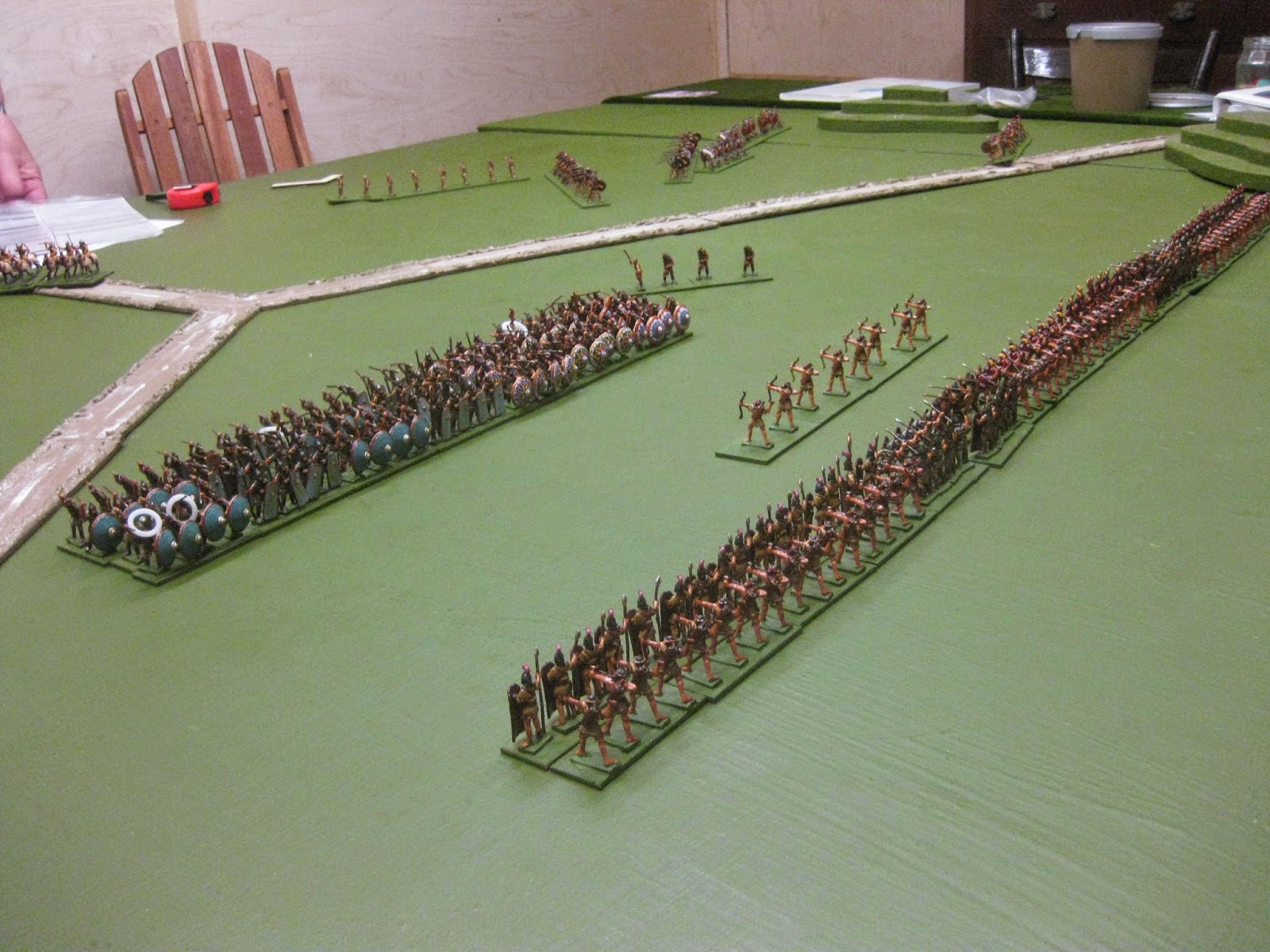 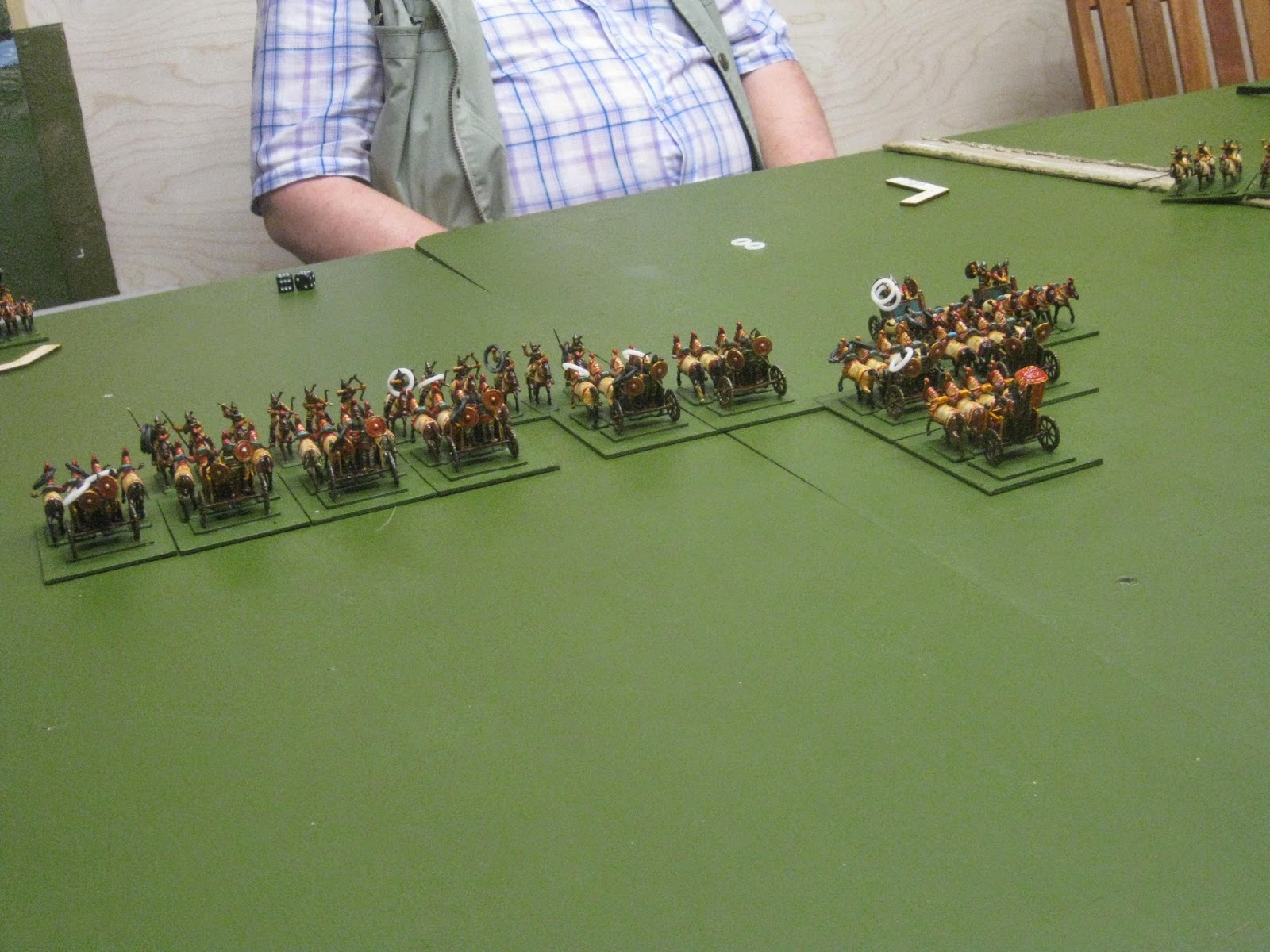 Stage two of the cavalry/chariot combat. Following up on breaking the chariots last turn I am able to throw another chariot unit into the cavalry, and crucially I have impetus. Of course I then throw rubbish all along the line and the impetus counts for nothing. Those cavalry have a charmed life. 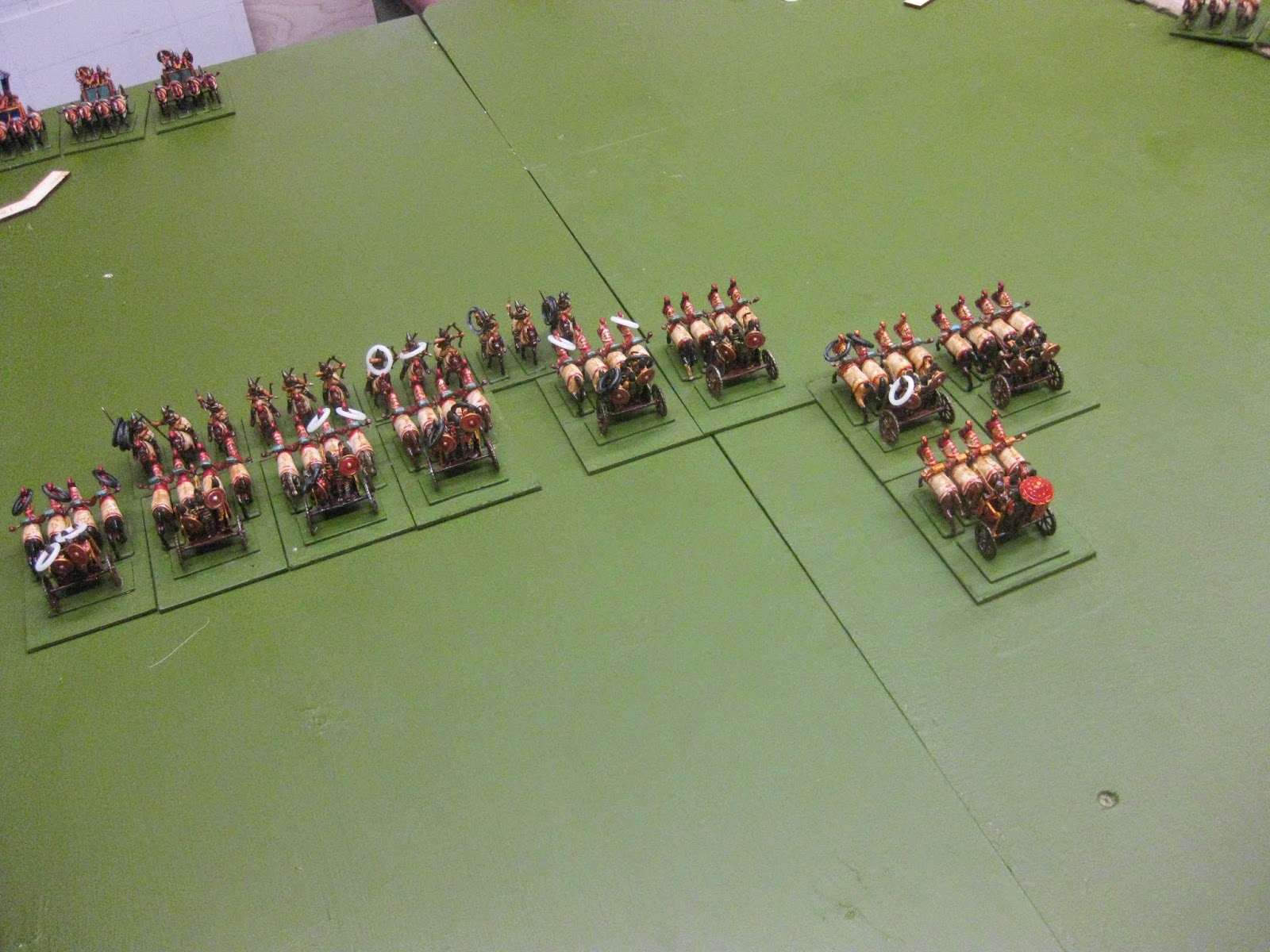 However I do break Will's other chariot unit. Alas because of the depth of the chariot unit I'm unable to wheel towards Will's cavalry coming in from the right  in my breathrough move. This will eventually cause me a real problem. 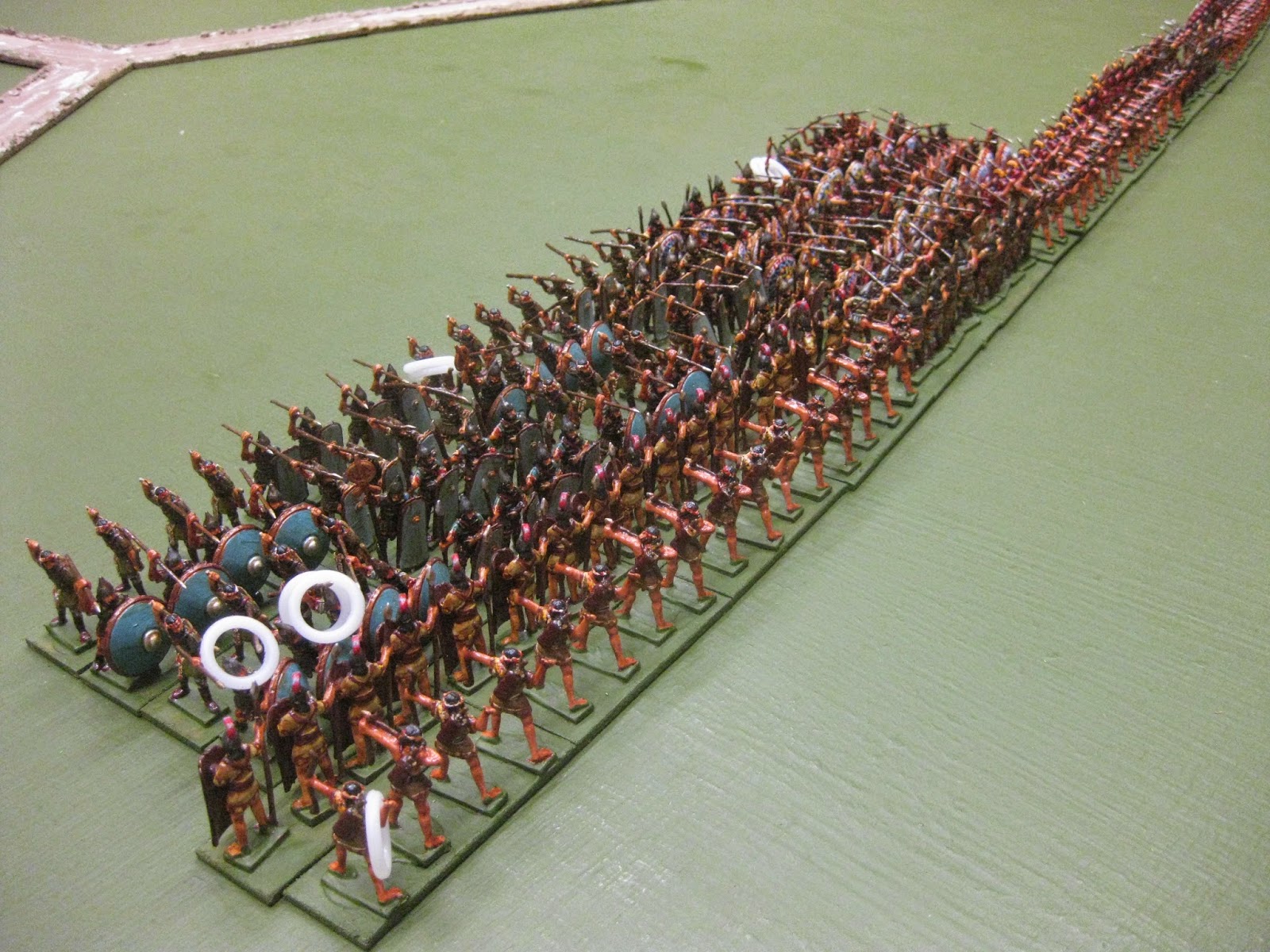 We finally clash in the middle. I've done enough damage to a couple of units that they'll break with another hit. What I need is to win the initiative so I can choose melee direction. I really, really need to go from my left as that end blue shielded unit is one of those close to breaking, and it is one of the few combats where I have the advantage. 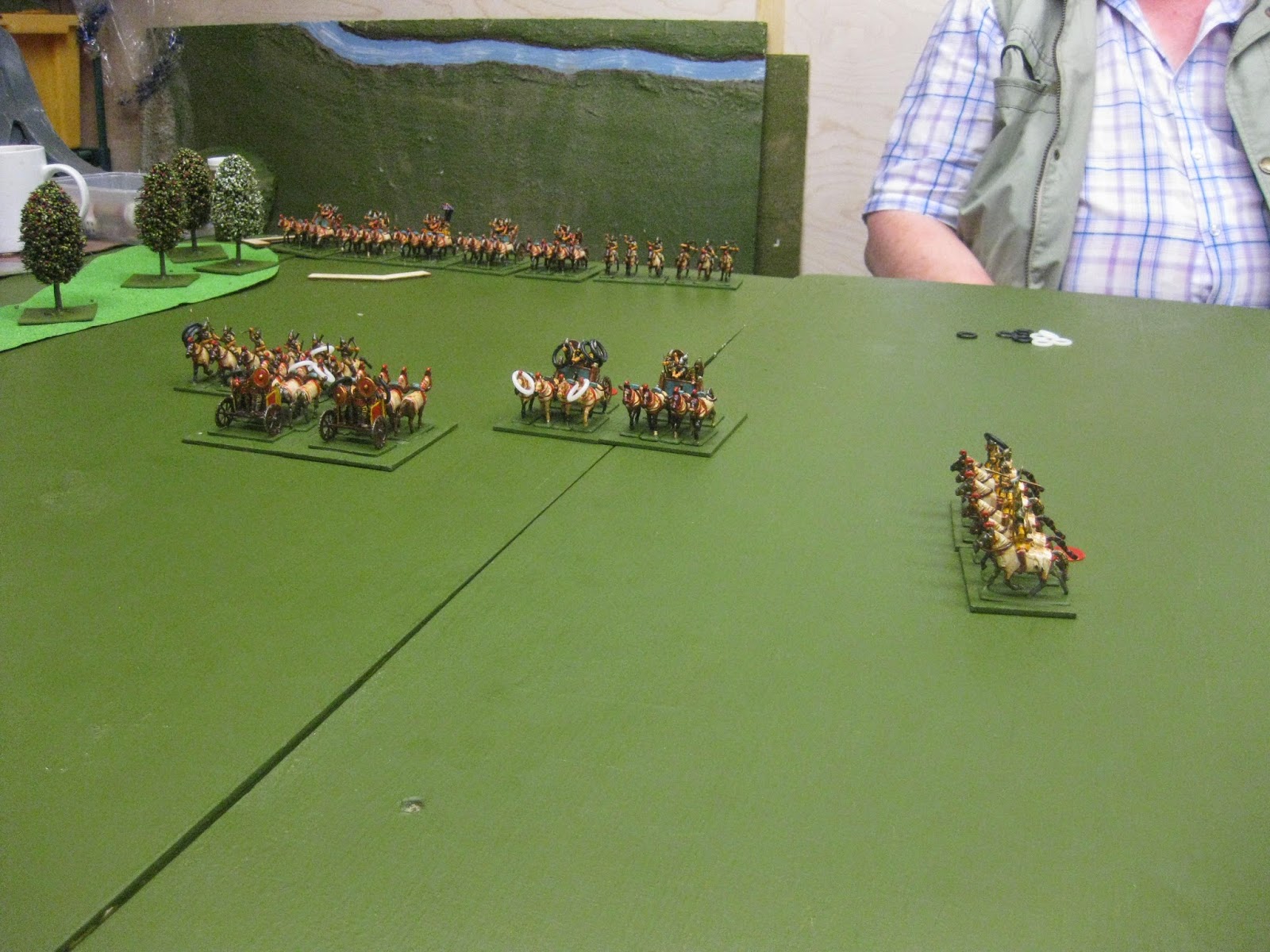 There's a few pictures missing here. My end chariot unit mistimes it's wheel to the centre and Will's cavalry  catches them in the flank after much re-measuring. They break, taking my General with them. Two of my remaining chariots are also broken by the cavalry without inflicting a single hit (that's 6 rolls at +1 where I'm outscored everytime). 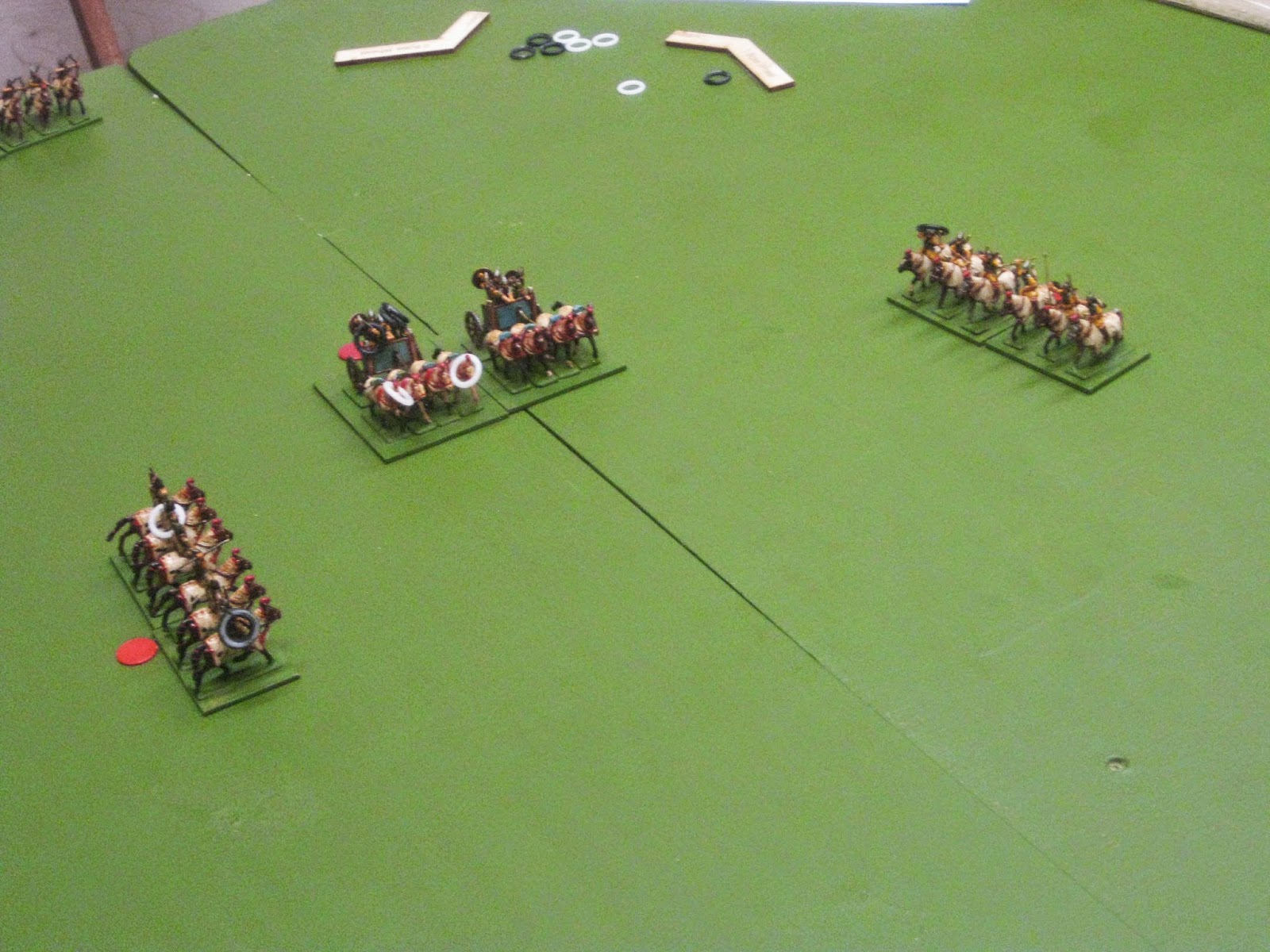 That leaves my remaining chariot facing off against two cavalry units. 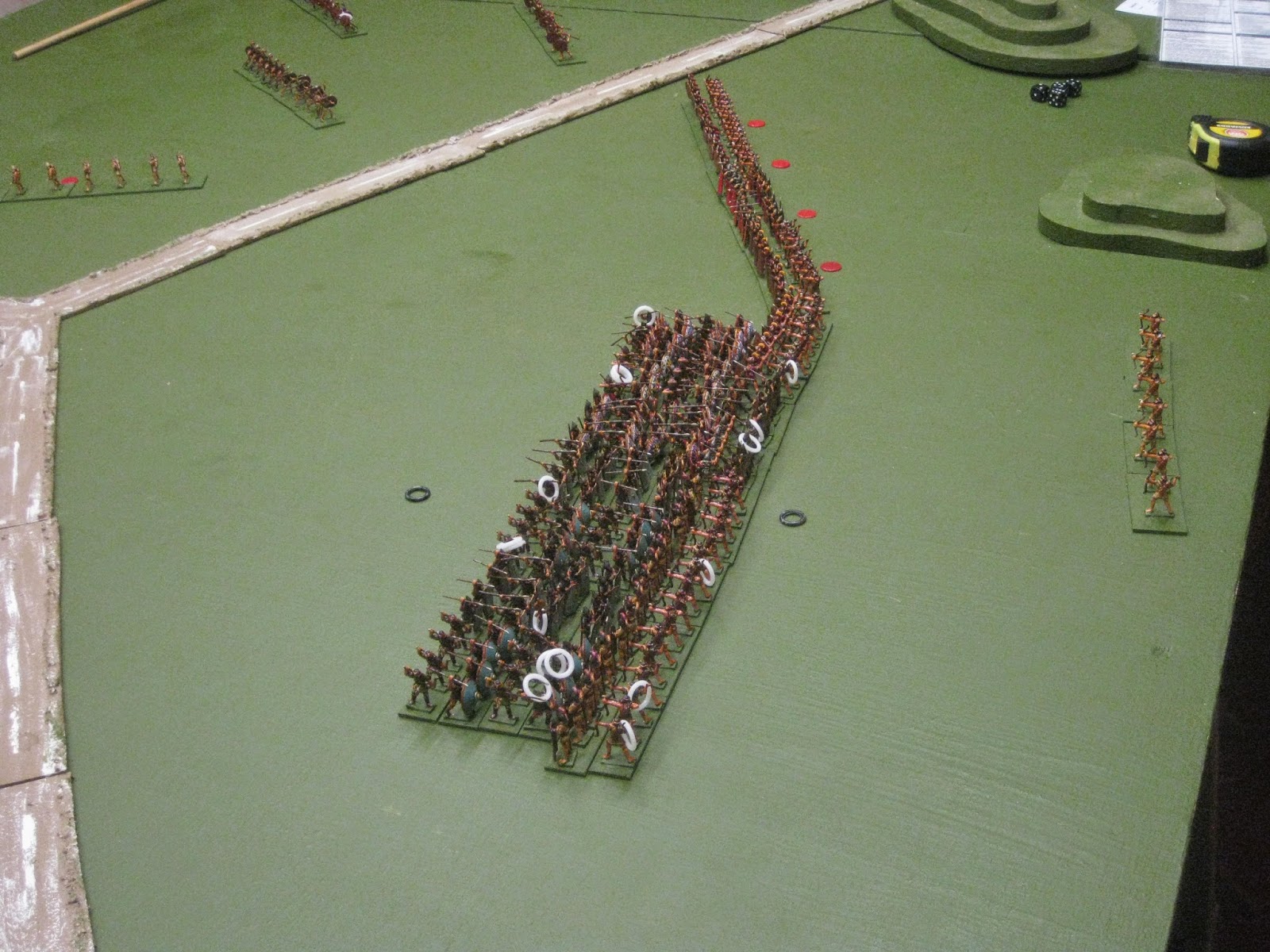 In the middle Will's luck is variable and I inflict as many hits as I take. Crucially none of mine are on his already weakened units, and two of his are on the same unit of mine. 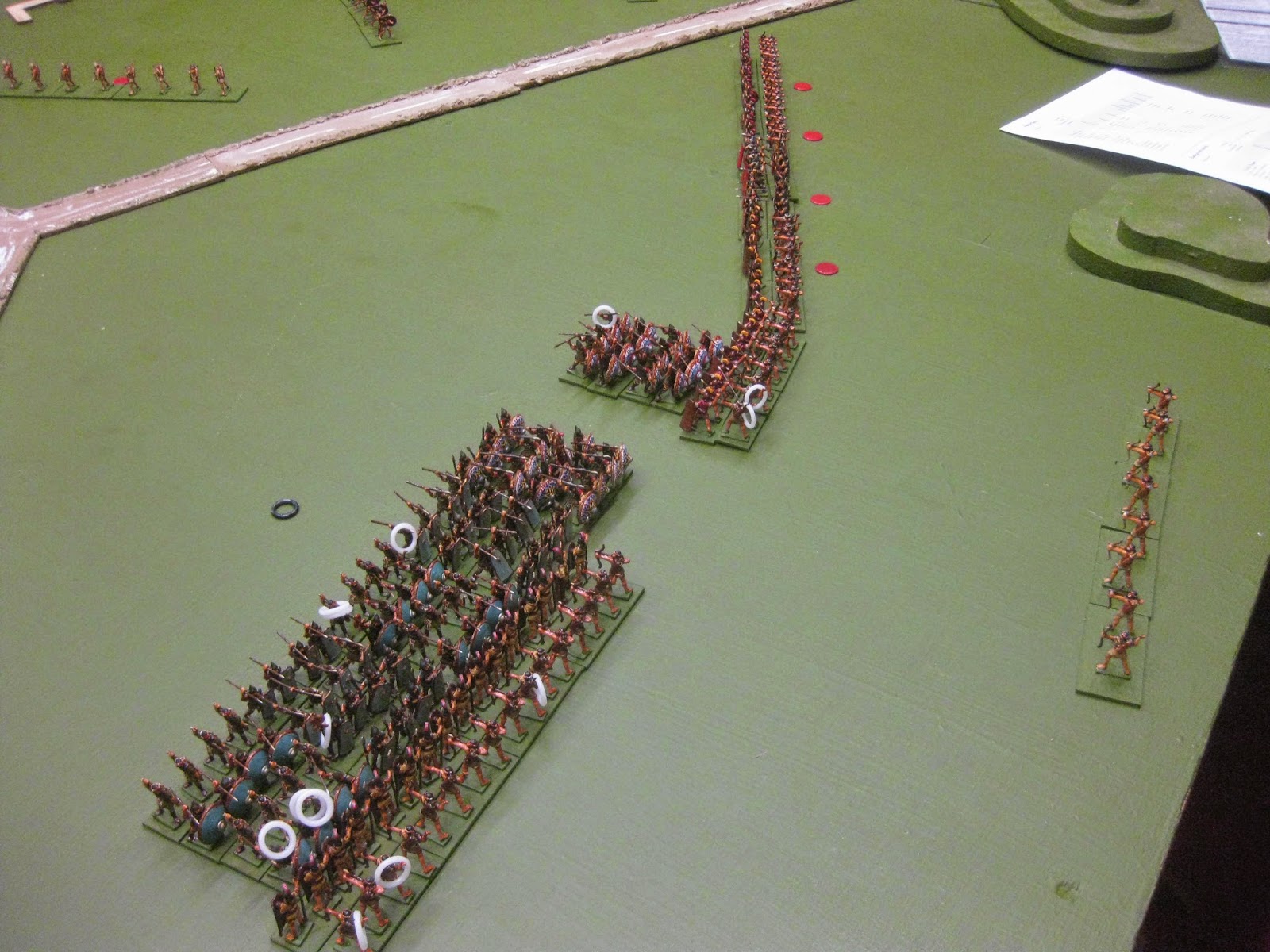 Entering the last move I'm down 5 units and Will is down 4. We both have a break point of 6. We're fighting from right to left again. I break a Guard unit to bring us up to 5 all, but next unit along Will hits twice, again, and I'm down 6 units and the game is over.

So, a close win for Will and I am disabused of the foolish notion that I might be a tactical genius.

Until next week, perhaps.
Posted by Trebian at 10:21