This weekend was my birthday weekend. The Peronne game I reported a few days back was my birthday game for this year (although there's also another game to write up if I ever get round to it).

Anyhow, birthday treat this year was a visit to London.

We started (after finally getting there, - transport issues) with a trip to the Imperial War Museum. I haven't been there for years, so a catch up on the general collection & the WW1 stuff was well overdue. 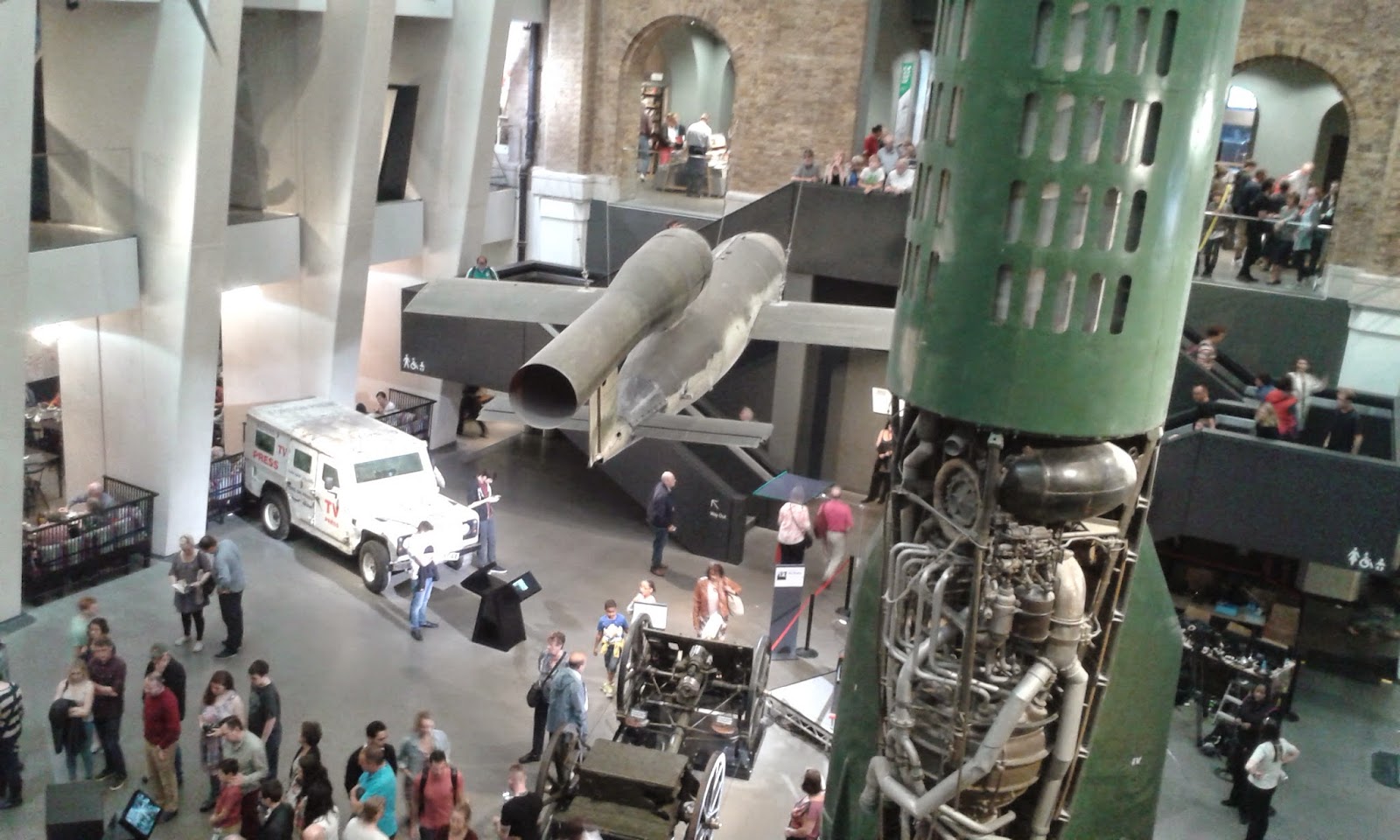 Well, we had a few issues. The place was heaving with people. The Great War is so fashionable now everyone has to have a piece of it, and where better to get your piece than the IWM?

What this means in practice is that the access to the brand new WW1 galleries is restricted to a certain number of people, and you have to get a ticket from the desk, even though it is free (like The Ufizzi in Florence). Next available access 3:45pm, by which time we needed to be well away. Humph. Still we could look at the rest of the stuff.

Well, the museum still has some cracking exhibits (Monty's staff car, bits of a Lancaster, nuclear bombs etc), but it's gone a bit modern-y. It's been zoned, and there's lots of audio visual and the exhibit descriptions are on post-it like things. It must have looked great in the design, but it's impossible to look round when it's busy.

And the general level of ignorance isn't helped by a general lack of understanding and the widely held belief that everything is a machine gun. I quote:

"Oh look a machine gun!"
"So it is dear"
(No it isn't, it's an anti-aircraft gun from the Falklands War)

Ah well, enough of the appetiser. Off to Hammersmith for the main course of the day: 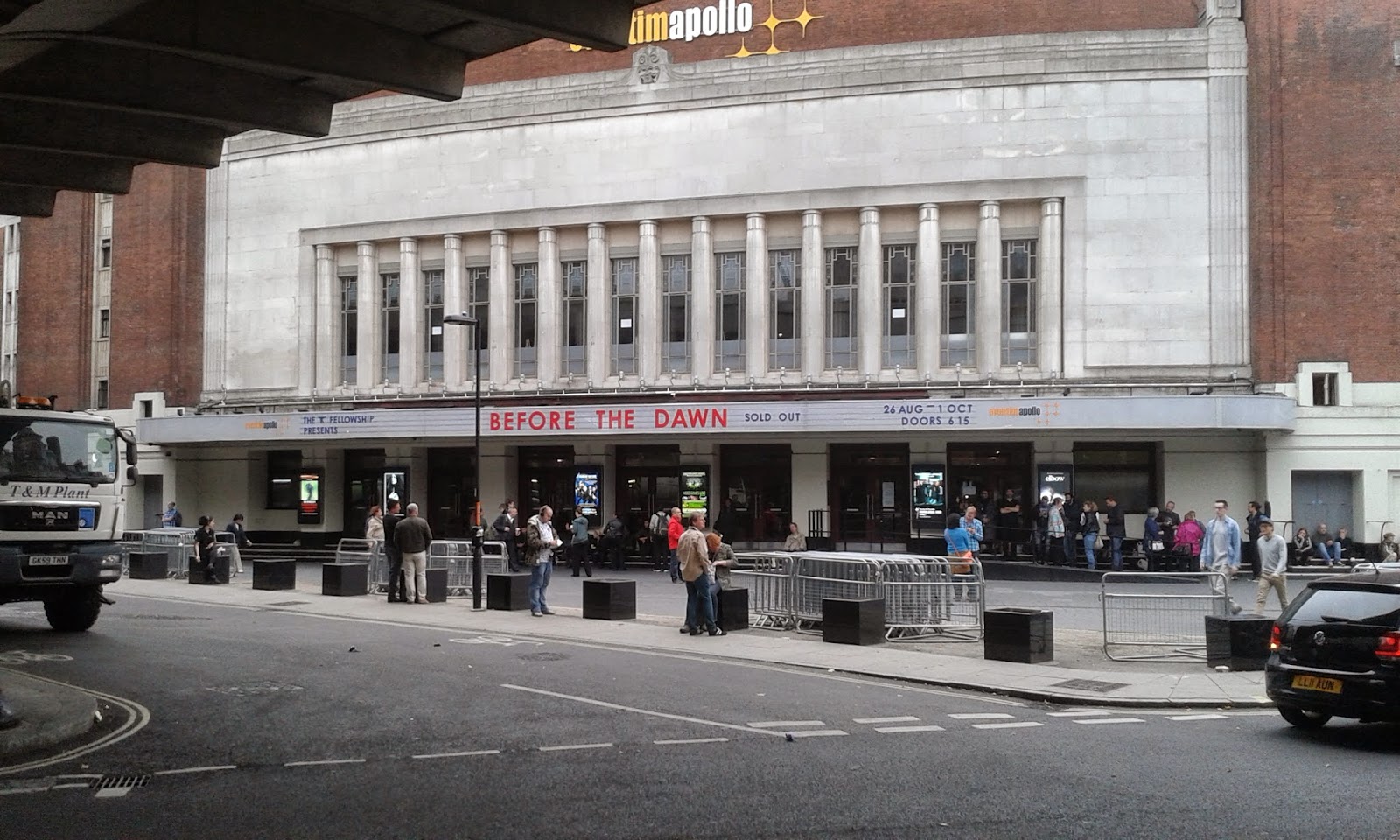 Yup. Ms Kate Bush performs live, just for my birthday. We meet up with our son & his girlfirend (he had to get the tickets as our internet access is so rubbish). 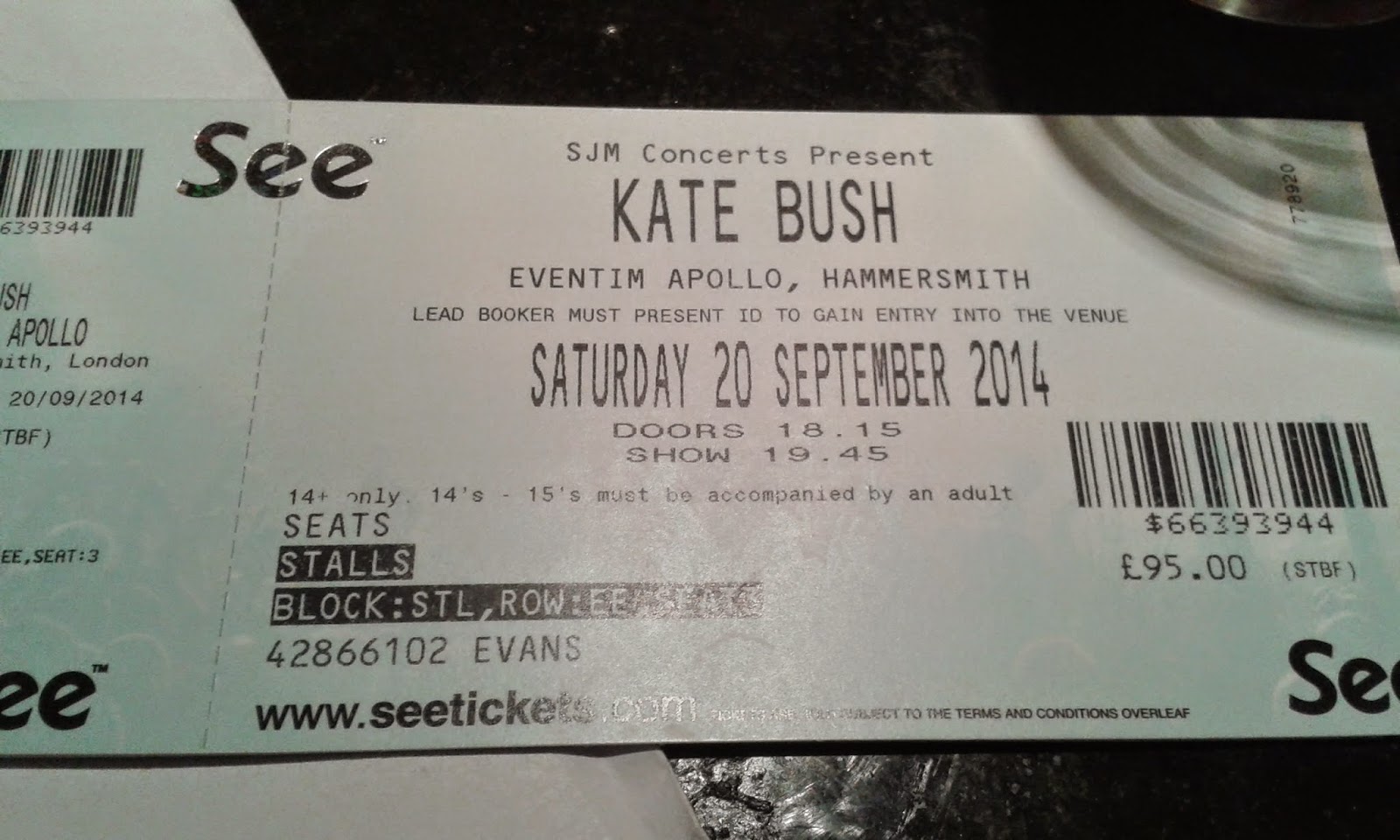 In accordance with her wishes, no pictures of the show were taken (a practice followed by pretty much EVERYONE in the theatre) but here's the opening band set up: 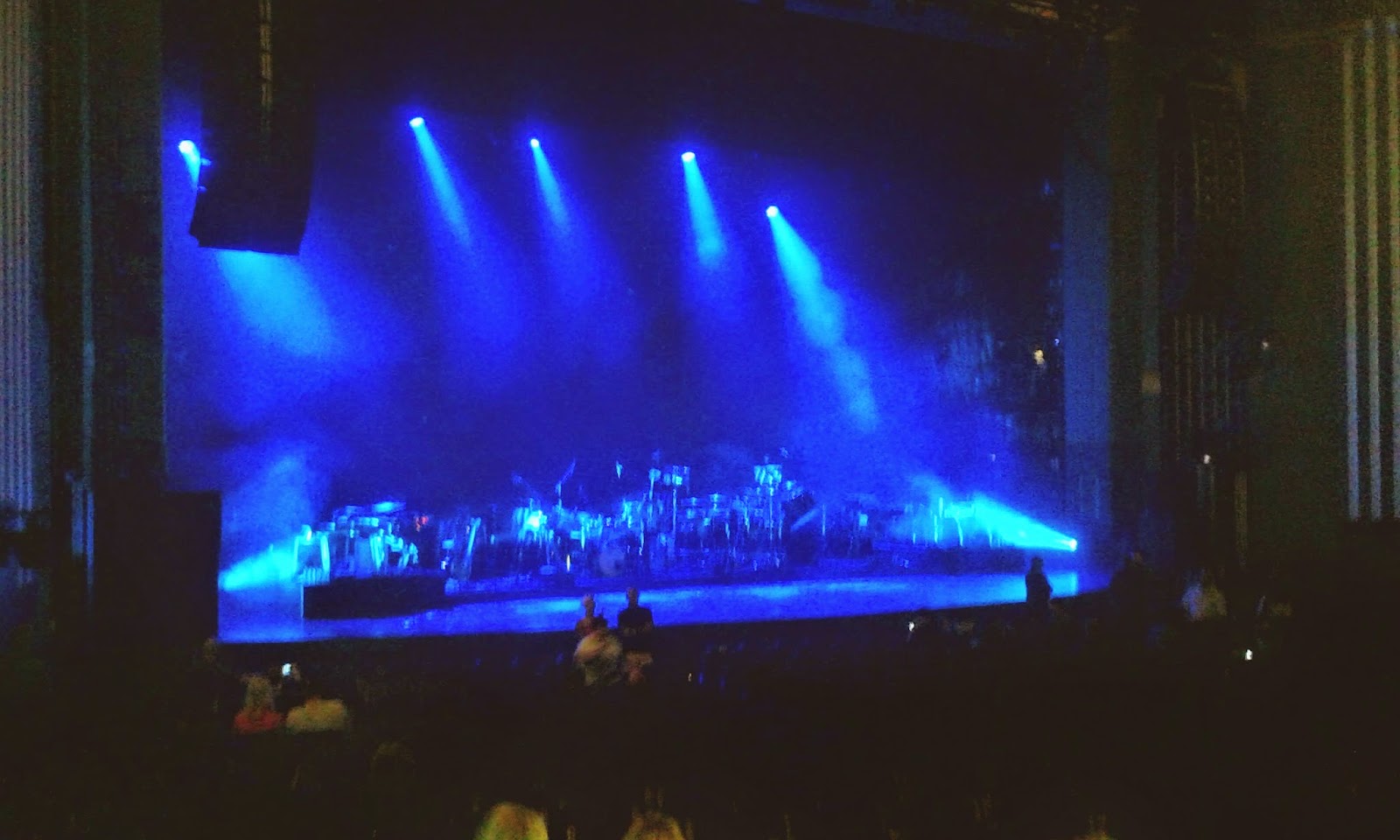 And this is the half time curtain: 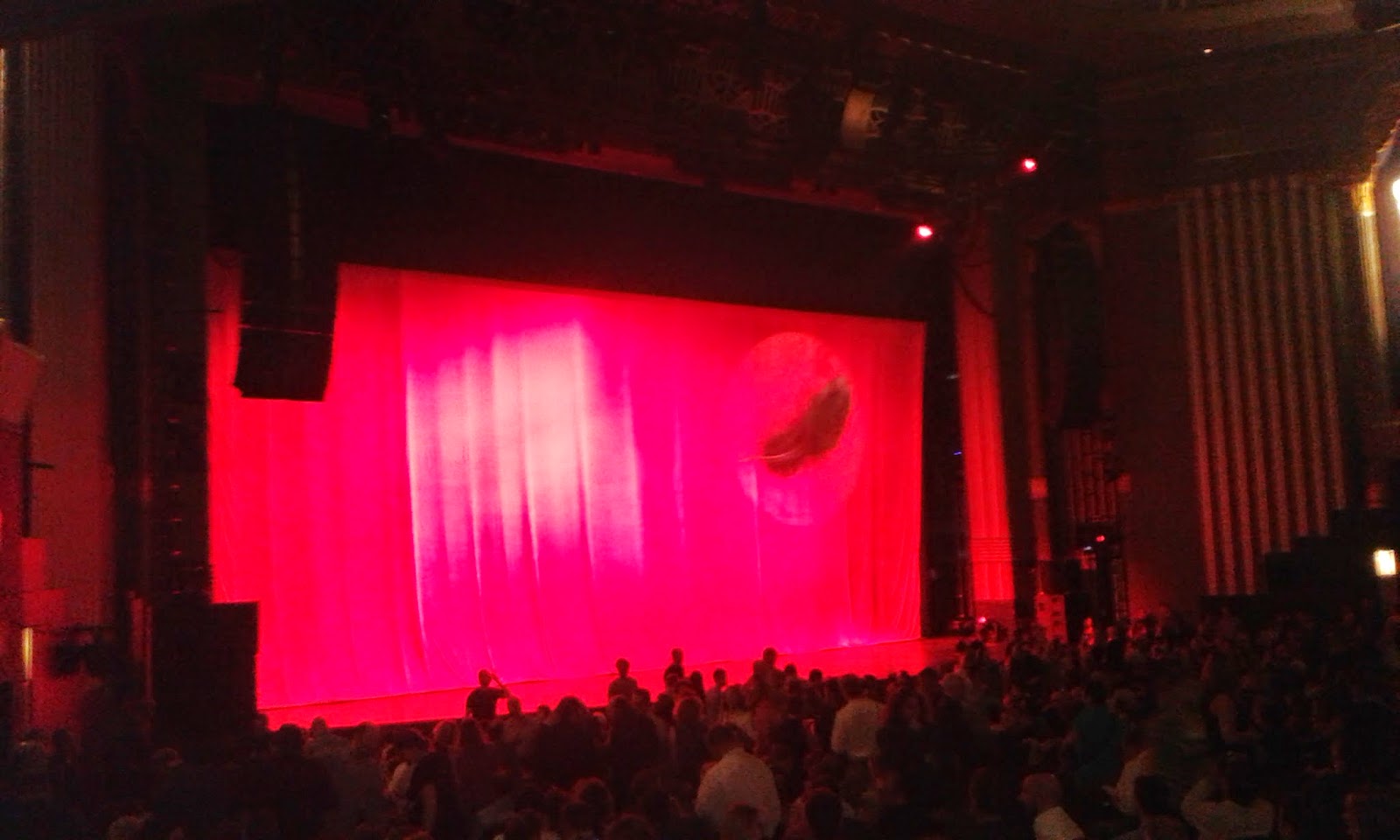 I didn't go and see her on the original tour in 1979. I was doing A Levels and thought they were important. Anyway, it'd be easy enough to see her on the next tour, wouldn't it? Didn't think it would take that long.

The show is a performance, - it isn't a concert. There's an opening 30 minute set, then a theatrical interpretation of "Ninth Wave" from "Hounds of Love", followed by a 20 minute intermission.

It is simply a brilliantly imaginative show. Slightly bonkers, as you'd expect, but totally professional. She started on time, she finished on time. The sound was perfect and the visuals stunning.

I know a lot of people (including most of America) do not get Kate Bush. For those who do, there's both so much and so little to say. She's unique (she's only a few weeks older than Madonna, but so, so different). Despite all the genius and madness she comes over as really normal. Her interaction with the audience carries the air of someone astonished she can't believe her luck and amazed that people care about what she is doing. Her delivery is self deprecating, and her delivery so, so, English. She describes her band as "Shit hot" in a middle class Kent voice in a way no one else could do. She's not pretending to be anyone else except for herself.

And then at the end of the show she has us all sing Happy Birthday for one of the crew. Okay, so it was for someone else, but it was my birthday too.

And I bought a T Shirt. 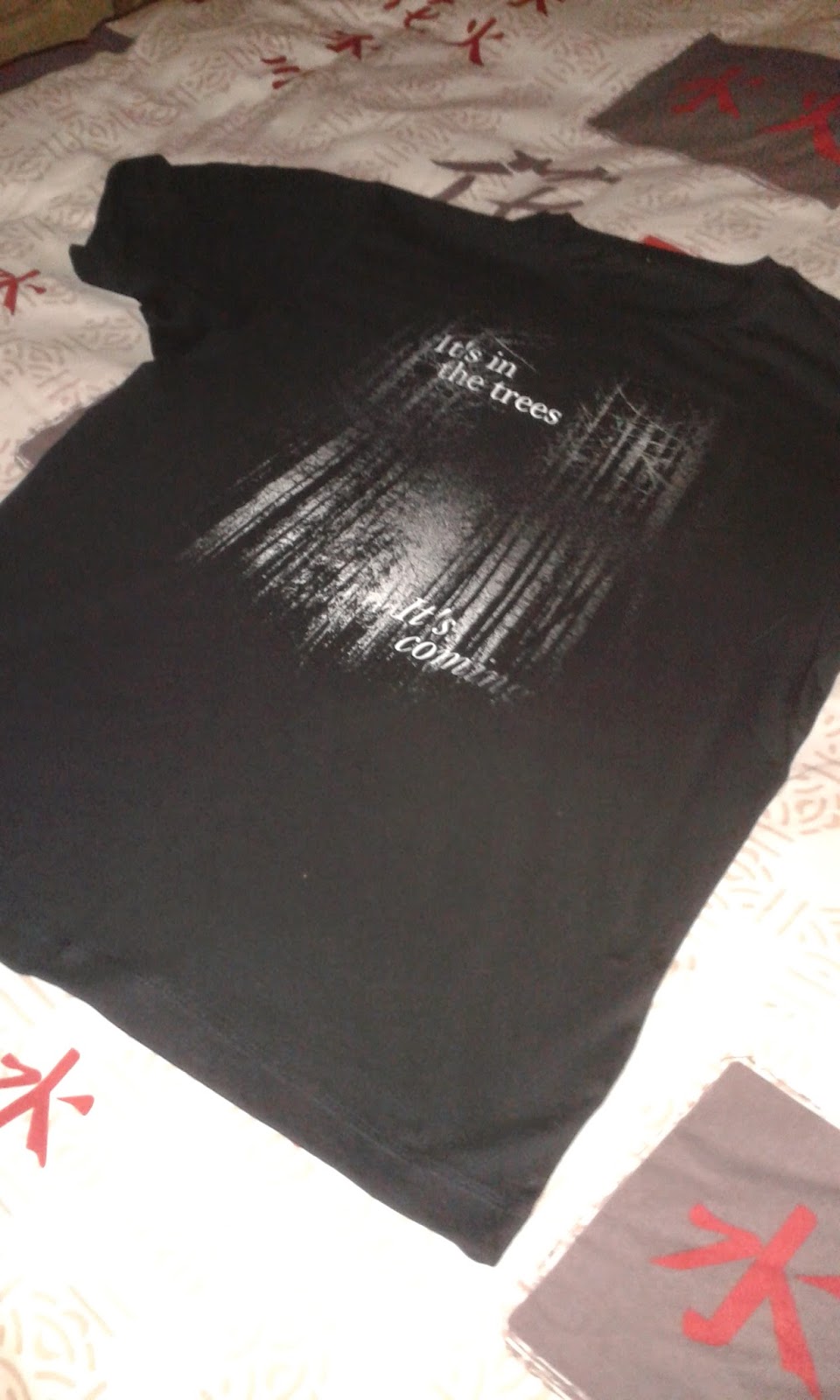 It's in the Trees, it's Coming.

Then it was here, then it was gone. Except in memory.
Posted by Trebian at 20:54