I've got PBI Japanese. I bought them because I wanted some XIVth Army & they needed opponents. Phil has some Manchurian suitable Russians. Why, I really can't say. Any how, they're the only PBI armies we own that are compatible as opponents. So why not?

I've never been to Manchuria, but a quick internet search indicated bits of it might look like China, so I used that as a basis for the terrain.

Unusually for us we went through the whole "snakes and ladders" set up rigmarole (not one of RFCM's finest moments, in my opinion, and neither was the previous battleships version) and I ended up defending, despite really wanting to attack. I had three basic infantry platoons, a HMG platoon and three tankettes. Phil had a whole load of stuff, including a couple of flame-thrower tanks and some other armour (BT-7s, I think). These will inevitably prove to be a challenge for the Japanese. 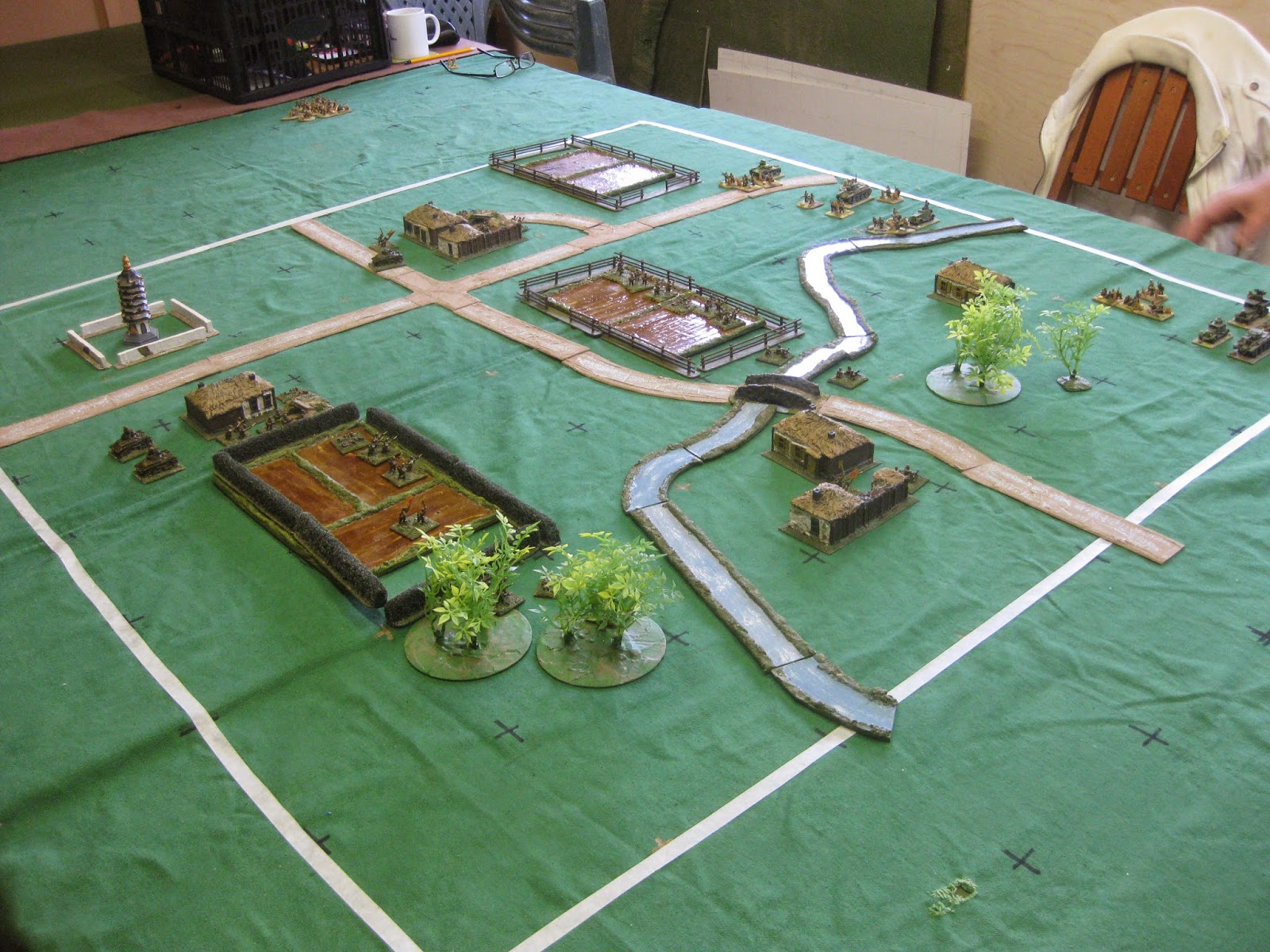 Phil started by rushing my right wing HMG position with as much armour as he could muster. If you look closely you'll see that the middle tank has been converted to have road wheels and no tracks. 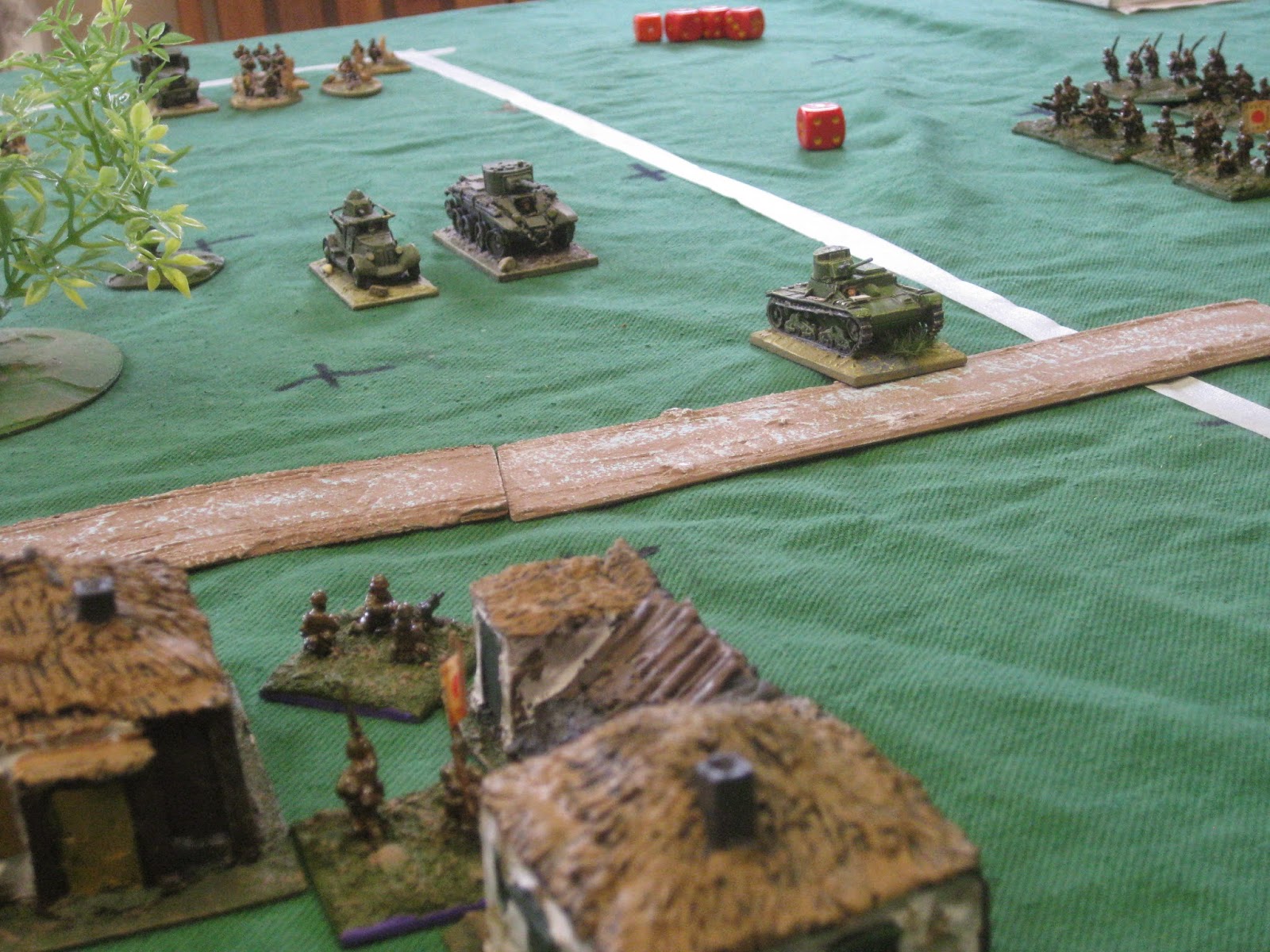 The HMGs are my main anti-armour unit, but they were singularly unable to hit anything with opportunity fire as Phil advanced. 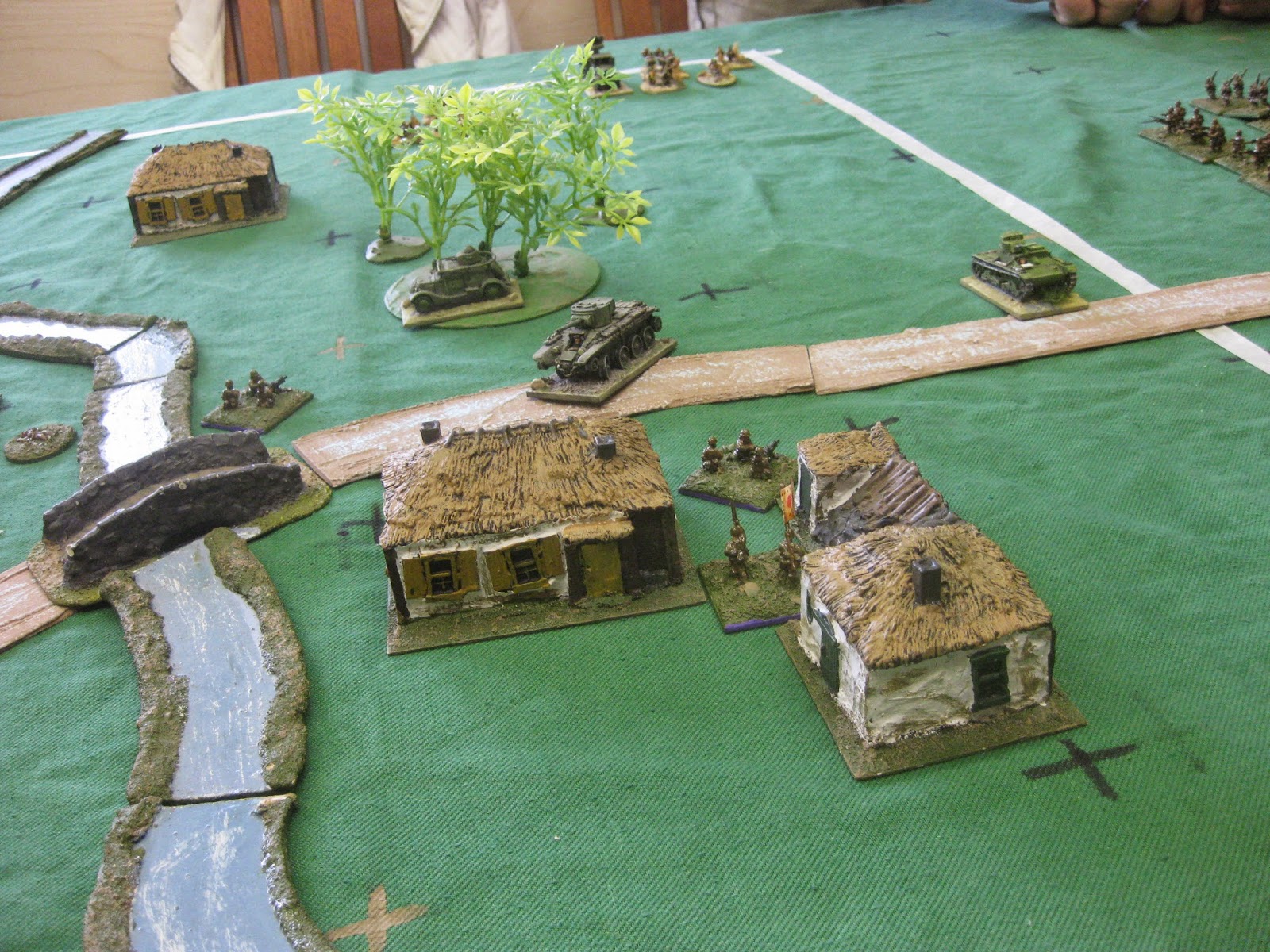 I did manage to shoot up his AA truck as it came too close, however. An early, and rare, victory. My malfunctioning MGs still couldn't hit anything and started to take casualties. 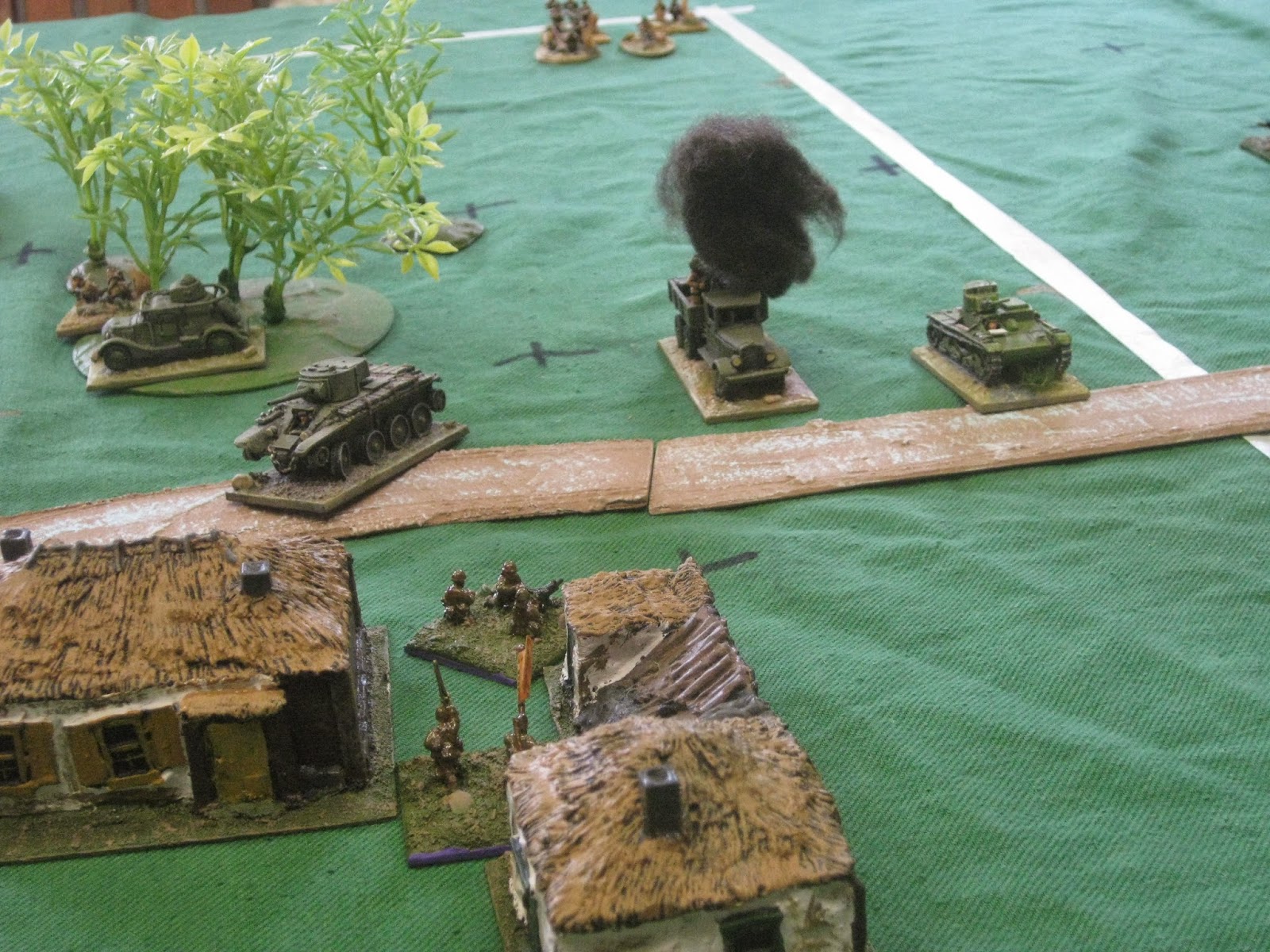 In the middle a bold thrust was made on the central section in the paddy field. Again opportunity fire was not my friend (several hits, all easily saved) and I took two hits (that's about all I took, and needed "anything but a 1" to save. As you can see, I found the "1" on both occasions). 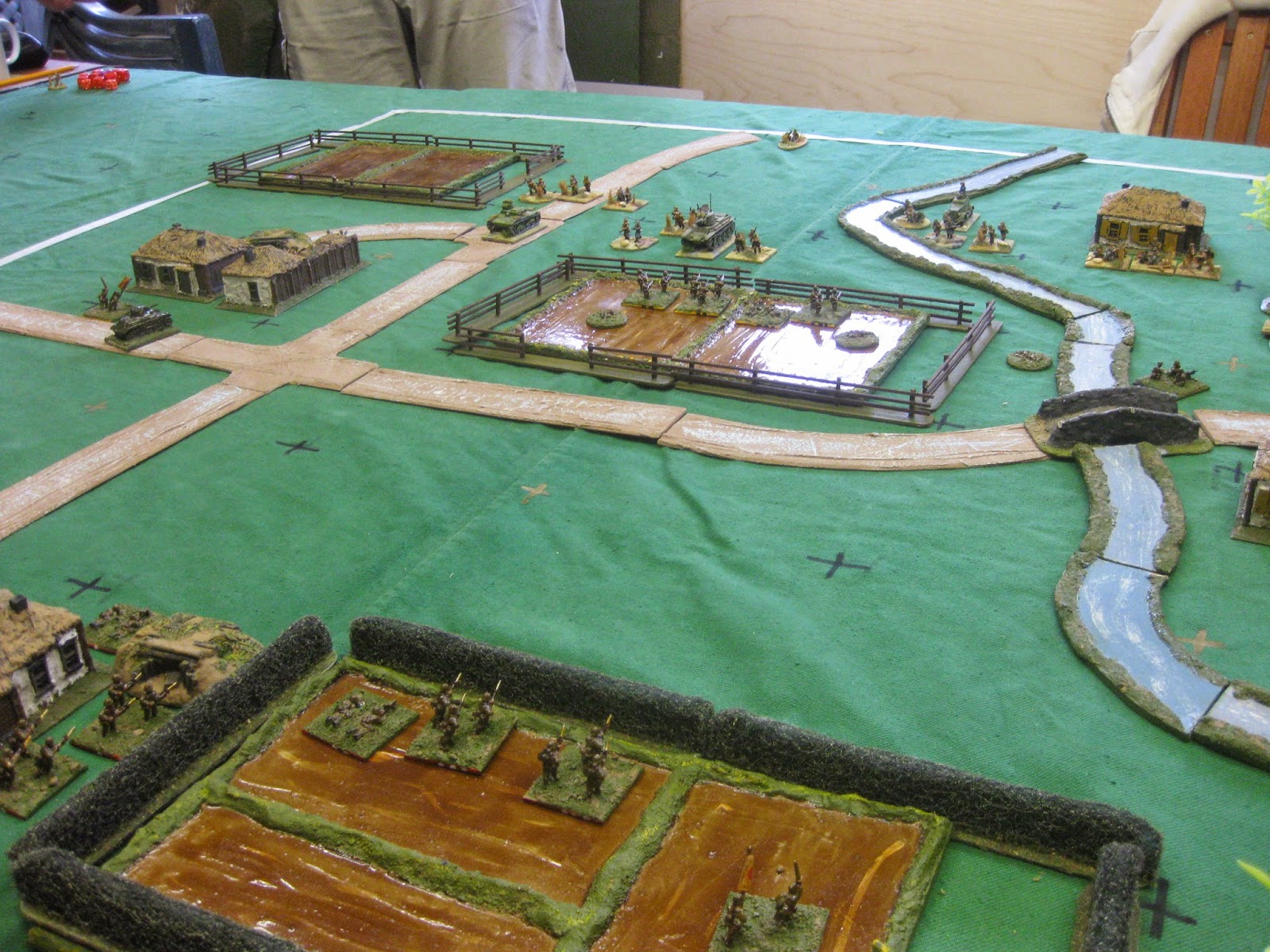 A turn's heavy firing from me produced no outcome. Phil was shepherding his units in the middle with armour to give them partial cover, but even so they're moving and I should get at least one hit. Over to Phil, who close assaults my MG command post (again no hits from op fire) and overruns it easily, losing only one casualty. Most of the work was done by the flame-thrower tank. I've lost my HMGs and inflicted one solitary firing casualty. 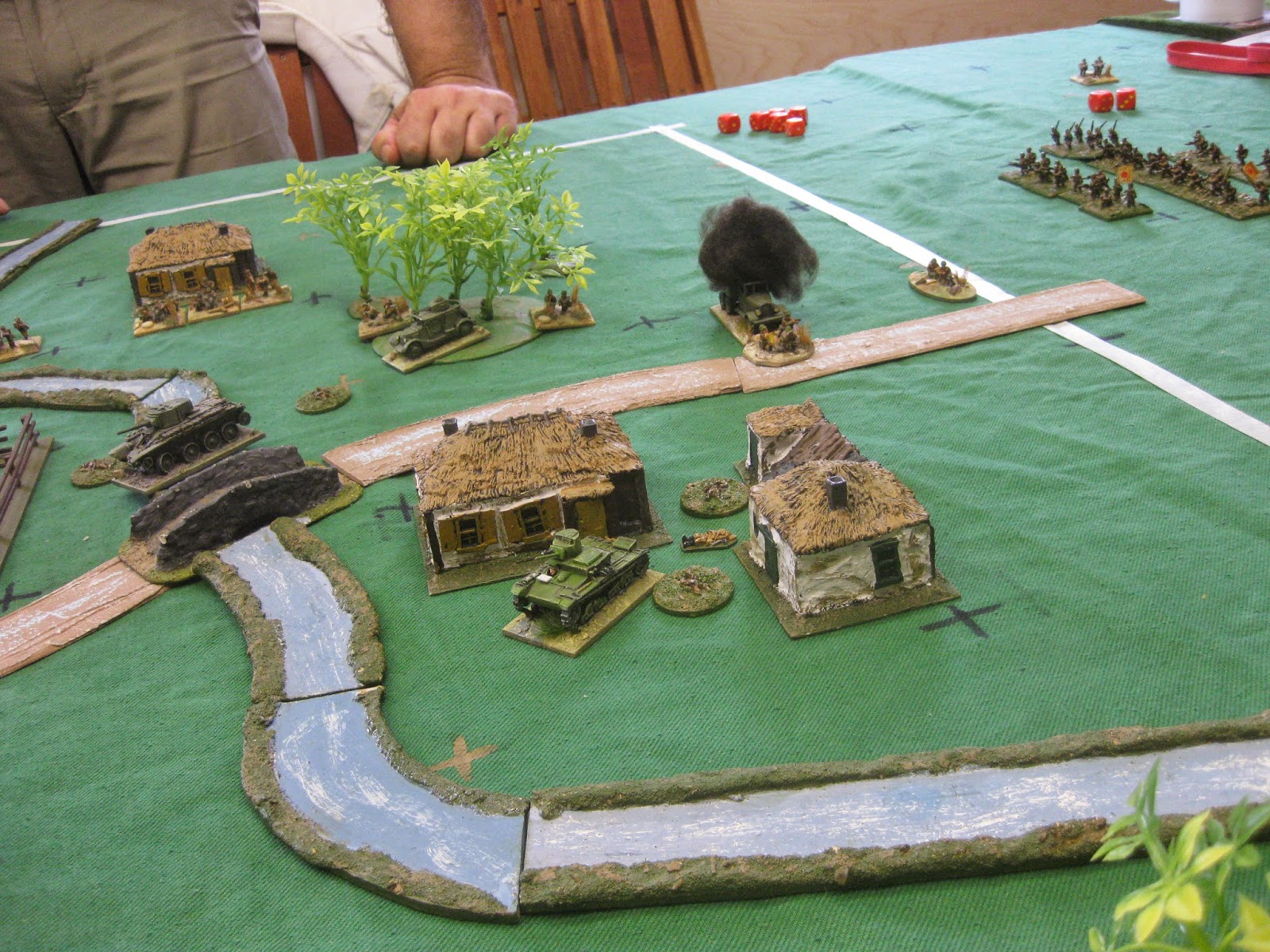 In the centre my tankette failed to scratch the armour of Phil's flame-thrower tank, and couldn't damage it with op fire either (the odds are I should have got at least one hit). Phil, on the other hand completely fried my little fellow with one quick burst. His general advance elsewhere has mixed results. He stalls at the T junction outside the farm and I wipe him out with a bayonet charge. In the middle my chaps in the paddy field are easily overrun. The fellows in the neighbouring field fail a morale check and leave the safety of their position to go and stand in the open, where they are promptly all killed. 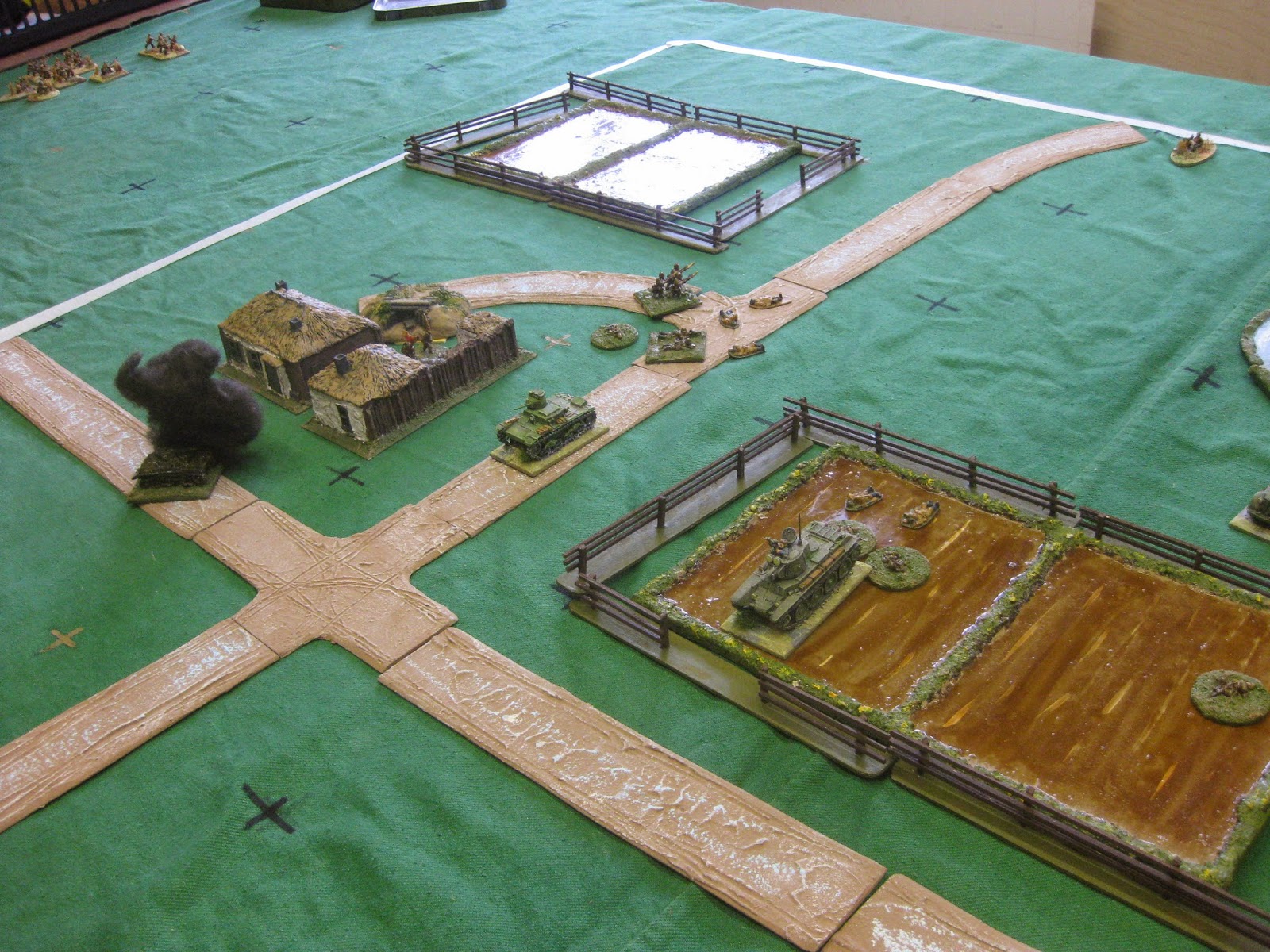 Phil now starts on my reserve line with a flame-thrower attack that kills one of my rifle squads. 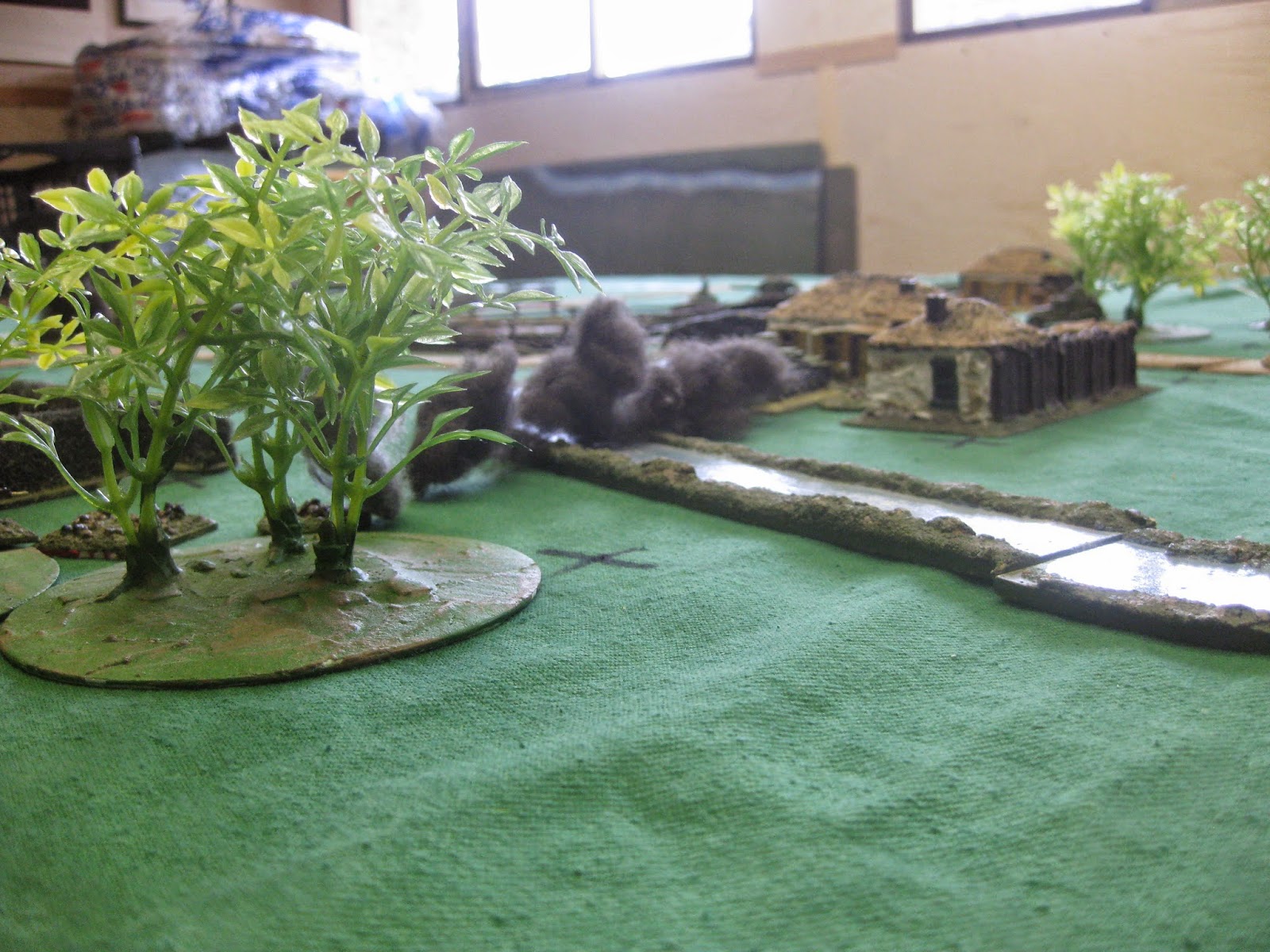 The squad that launched the attack on the group at the T junction are all killed before they can regain cover, so the platoon is reduced to just the commander. He refuses to run away in the break test. I have finally hit that flame-thrower vehicle with one of my tankettes, and immobilised it. Alas my brave infantry assault from my surviving stand fails to have any effect, and he returns to the farm. 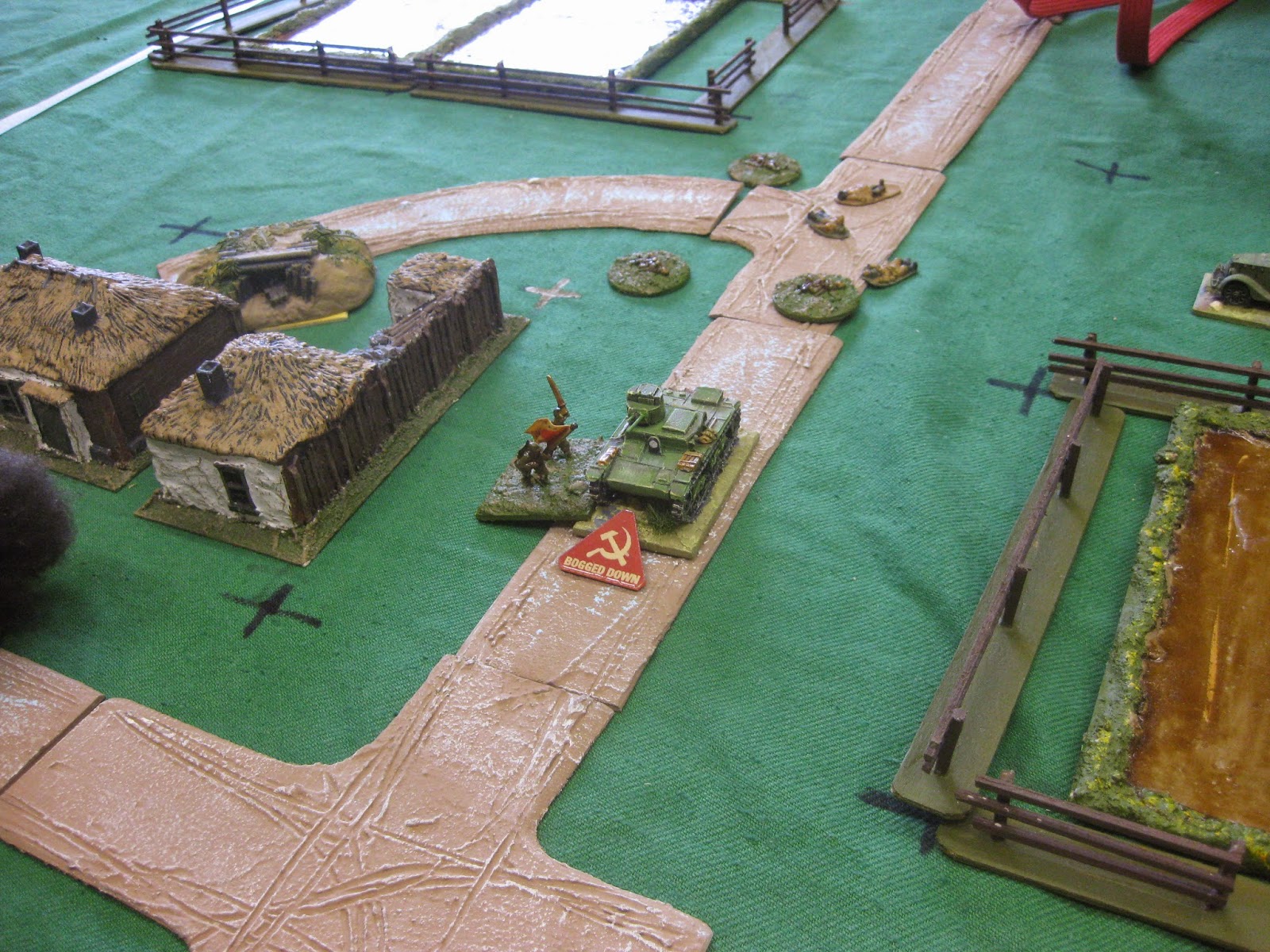 In reply, Phil succeeds in immobilizing one of my tankettes (see the shed track marker in front of it). 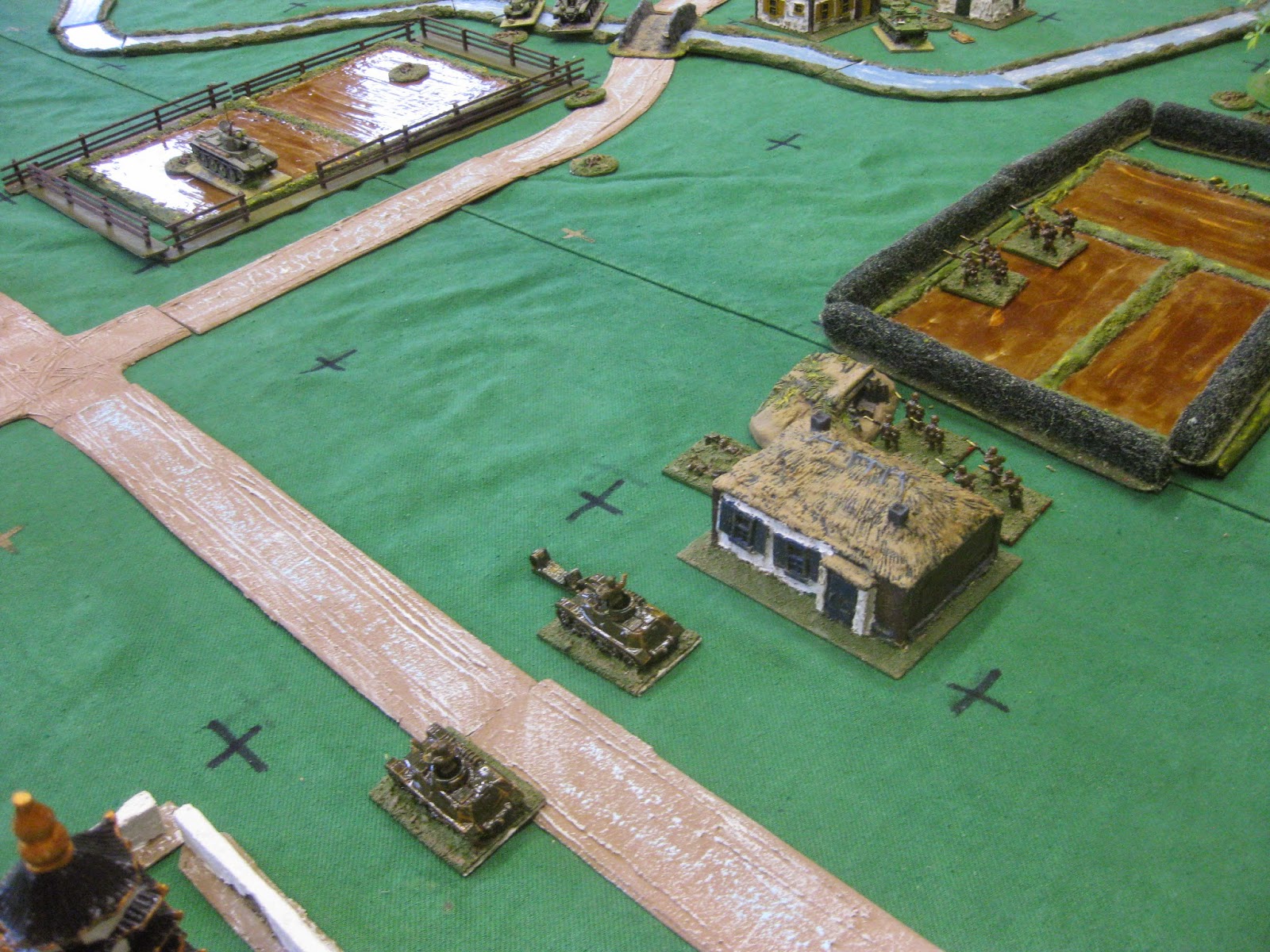 Phil has now got some reinforcements on, and rushed them up towards the farm. Alas my brave Japanese officer has decided to flee, leaving the farm wide open, so this is a pretty safe move as the game is nearing its end. 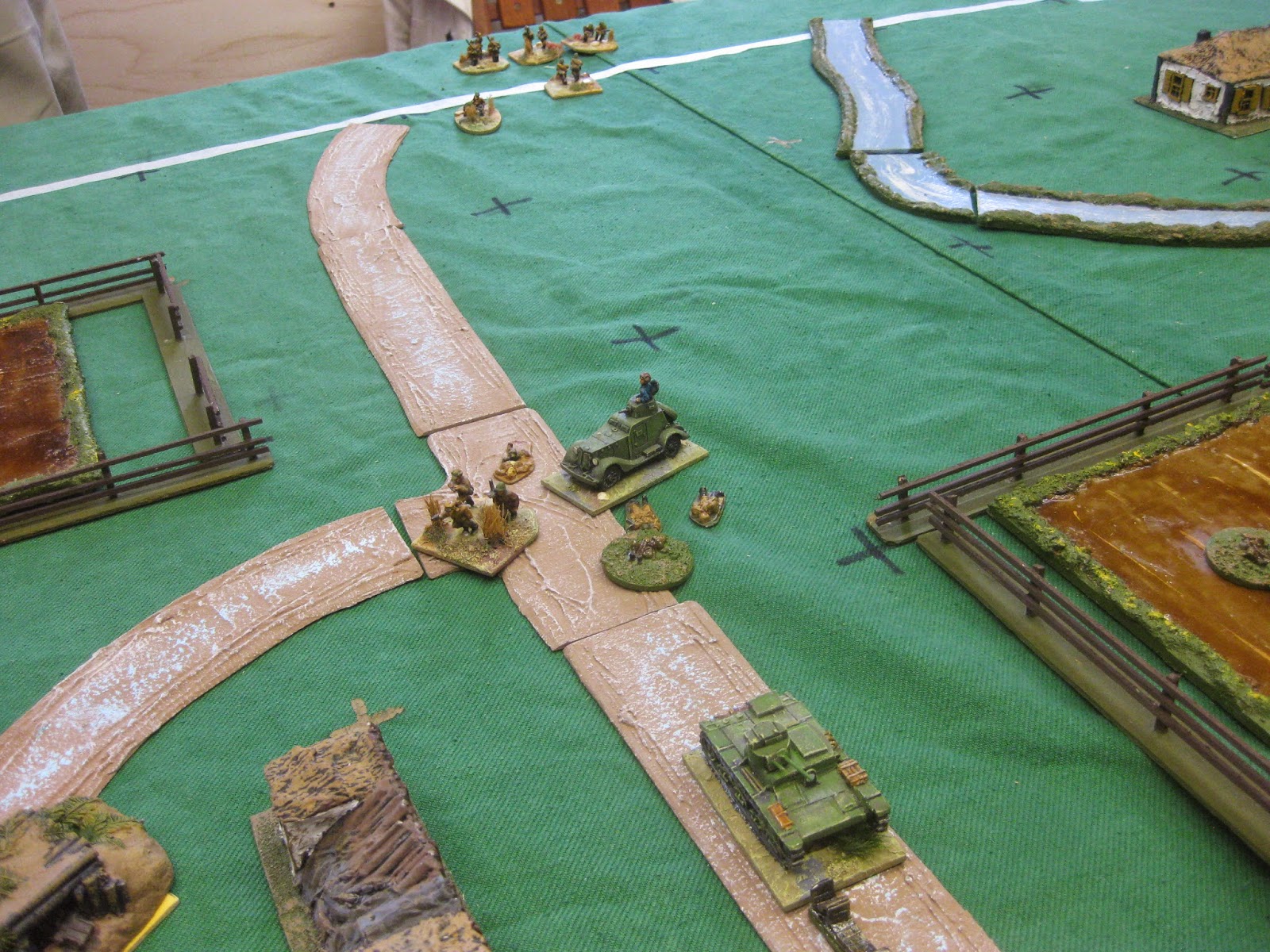 Phil's reinforcements quickly occupy the farm, so I am forced to drive my tankettes up and hose it with MG fire in the desperate hope I'll kill them all. This proves not to be the case. 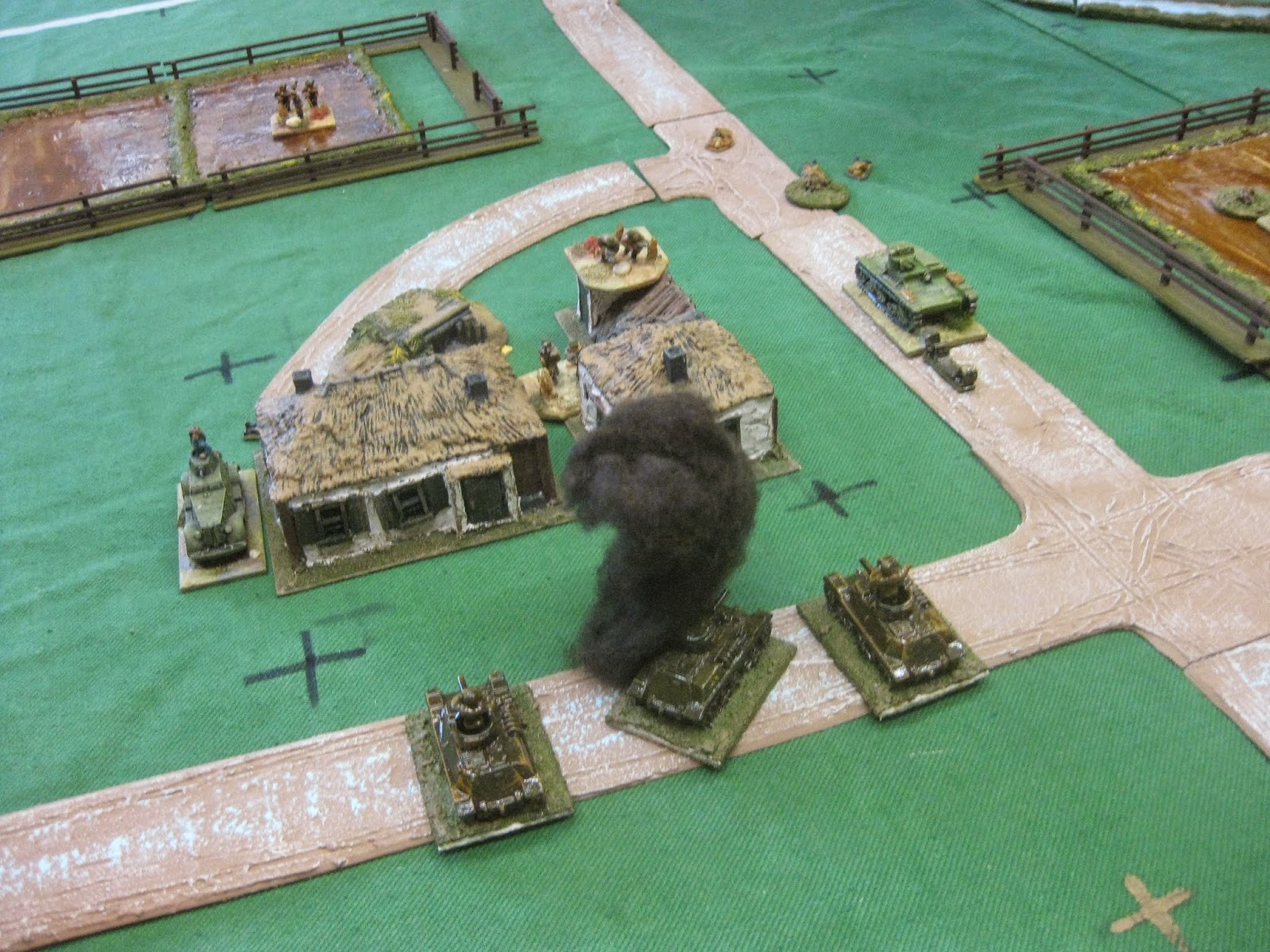 The right wing is now well and truly under Russian control, and due to my performance on the opening attack sequence I've only had one set of reinforcement rolls. I'm better off not deploying the troops at all and claiming the VPs for them. 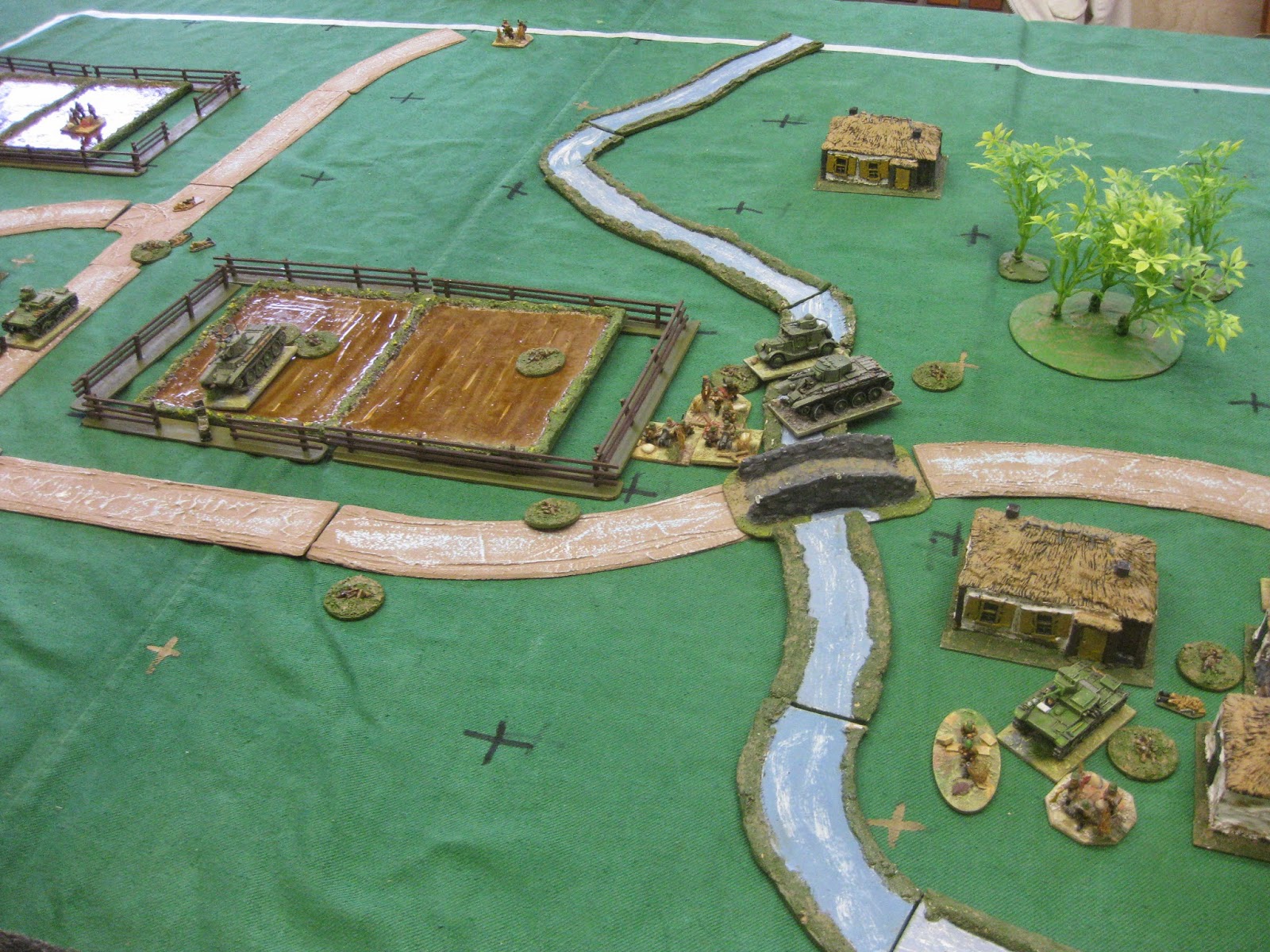 So, the game ends with me holding one objective, and Phil two. I've lost an HMG platoon and also an infantry platoon and one tankette plus a few bodies elsewhere. Phil's taken a fair few hits as well, but his armour is mostly intact.

The end of game Victory Point count up gives a pretty big win to Phil. Through naivety there were a couple of mistakes I made in my final turn, where I should have been doing a general land grab to get points, but holding two objectives was key.

It felt closer than the eventual result. Those Russians are a tough challenge to an army that is weak in ATK weapons. If I had my time again and really wanted to win I'd muck about with the historic orbats, and put in a couple of flame-throwers at least, and perhaps an infantry gun or two. The ATK rifles are pretty useless (although quite effective against MY "armour", or course ).

PBI continues to infuriate and engage me in equal measures. I love a lot of the core mechanisms but it can be prone to long stretches of utter frustration. I still think it is the best company level game that I have played, however.