As readers will know I've got a lot of polythene plastic toy soldiers of the Airfix type. Long term readers will also recall that a lot of my original posts were about how I go about painting 15mm metal figures. That was a no-nonsense approach designed to produce as many completed units as possible in as short a time as I could manage.

When it comes to my plastics my view is the same. I want to complete units as efficiently as possible. My eye sight and patience is no longer up to doing the multi-layered and washed GW type approach that dominates the hobby, so I do what I do, and I do it like this.

Okay, so this is what works for me. I have read loads of stuff about how to do this and ignored most of it. One of the biggest "must do's" everyone on the forums will tell you is to under coat the figure in PVA. Uh , - no. I've never bothered and don't feel the need. What you want is a good painting surface, properly sealed with a good base to take your paint.

Oh, and this is all about painting with water based acrylics.

1) Preparation
Before you do anything else, take the figures out of the boxes and wash them off in washing up liquid to remove the release agent from the mould whilst still on the sprue. Rinse them off and let them dry. (Phil, who undercoats with enamels, reckons you don't need to do this as the solvent in the enamel breaks down the release agent as you put it on).

Paint will flake off spears unless they are held close to the body. This is a similar problem to cast spears bending on metal figures. It's going to happen unless you replace them. Of course some plastic figures come with ring hands and separate plastic pikes and spears. Throw away the plastic ones and use whatever you would use with your metal figures.

Wherever I can I replace spears with dress making pins. Where the spears are moulded on they're easy to carve off if you use a sharp knife, then you can just push a pin through the hands and then snip off the head (of the pin, not the figure. That would be silly). This is usually straight forward, although some of the Zvezda plastic is really hard. In those cases I chop the hand off, stick a pin on with superglue then fashion a hand over the top with hot melt adhesive.

I take off mould lines with a really sharp blade as well, although I have been known to use a heated paper clip held in a cork to smooth them down instead for a bit of variety. 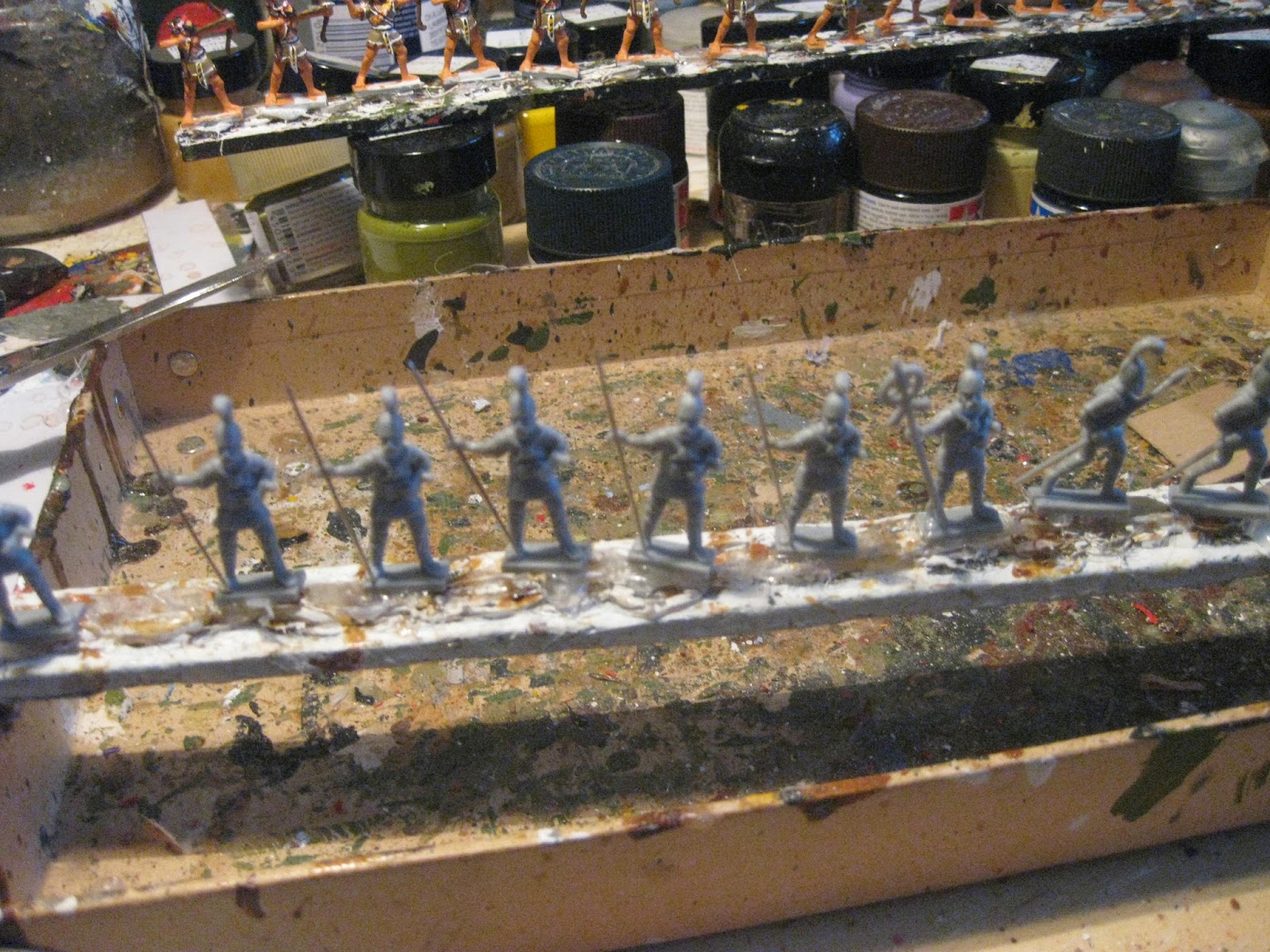 To make the figures manageable I glue them to sticks in batches of 12 or 16, depending on unit size. This is something you can't do with 28mm metal figures, as they're too heavy.

This is a batch of Neo-Assyrian allies. As you can see they've mostly got pins for spears.

I attach them with hot melt glue to bits of wood strip. Will uses PVA & lolly sticks, then soaks them off over night because it was recommended on a website. With hot melt you can just lever them off with a pen knife. 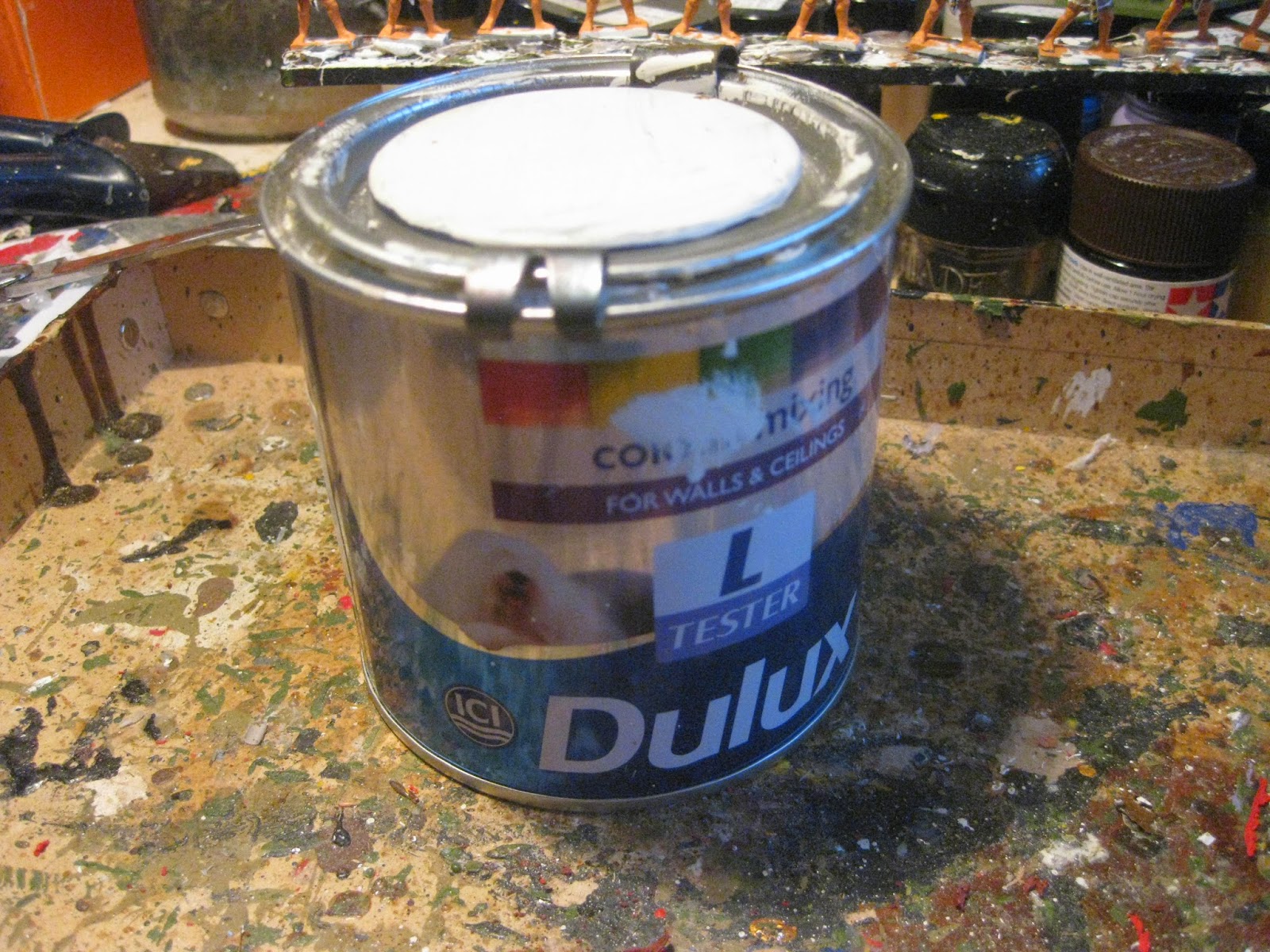 Once they're on the stick I can apply undercoat. Right, I've heard about sprays and everything, but after years of trying different things I now just use Dulux matt white (well, a slight off white colour called "Labrador Sands"). Yeah. You heard me. Dulux. I get it mixed in 250ml pots at Homebase. What you have to recall is that Dulux are proper paint chemists*. The stuff is good quality and it sticks where it's supposed to go if you prepare the surface properly. I mostly don't even water it down these days, just brush it thinly. I have black as well for when the mood takes me.

Then let it dry. If you have any armour to paint I then paint over the armour area with black ink wash very carefully.

3) Applying the paint
As I said, I use acrylics. I simply block in all the colours, but make sure I pick out details such as head bands and cross belts in as light a colour as I can get away with, to make a contrast. That's it. 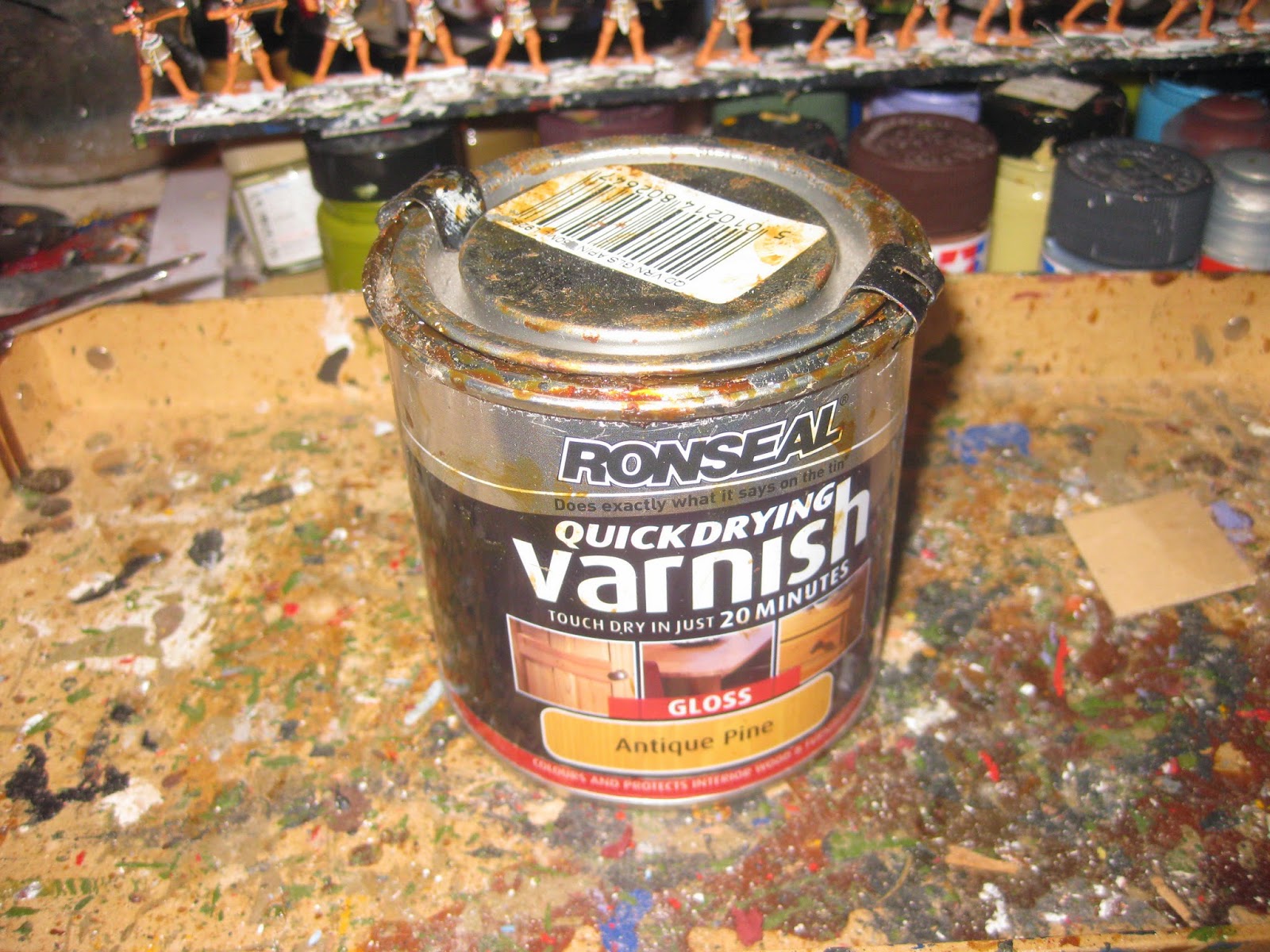 The varnish does all the hard work. It protects and tints the figures. I use Ronseal Quick Drying Varnish, in Antique Pine.

It is virtually aroma free, so it can be used in enclosed spaces. It dries in 20 minutes, and it's tough. And compared to Army Painter...well go look at the prices yourself.


So that's it really. It's not clever or fancy, but it gets the job done, and the figures are robust once finished. I've got figures in my collection that are over 20 years old, I reckon, and are in pretty good shape. Some minor flaking where I didn't replace spears, but that's easy enough to touch in before I need them for anything special.

The point of this post is that there's a lot of rot talked about how hard these figures are to paint and how the colours don't adhere and you have to do all sorts of exotic preparation. It's rubbish. This is what I do and it works. If you have a method that works for you that's different, then go for it. There's more than one way to skin a cat.