By way of a bonus game last week Chris A brought along his Russo-Turkish war figures, which he games using Neil Thomas' 19th Century Europe rules. We've tried these before, but Chris has added quite a few bits and pieces since then. He's also been reading more widely on the war mainly due to being trapped in hotels whilst away on business.

In this scenario, laid on for Phil and I to play, the Turks have followed up on an earlier victory and are landing a considerable invasion force on the shores of the Black Sea to free their co-religionists. The Russians are advancing rapidly to throw them back into the water. 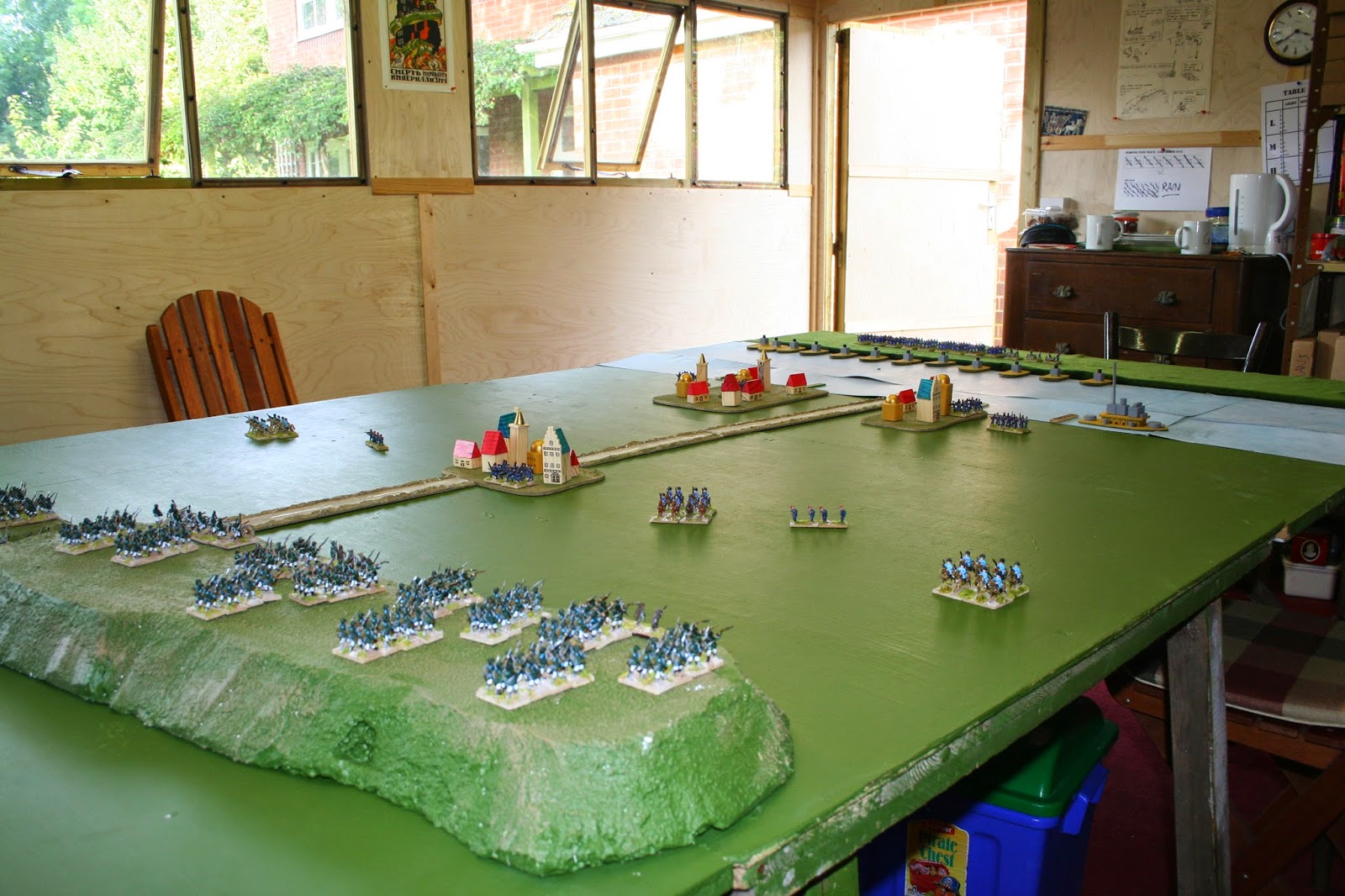 Chris is a habitué of charity, one world and toy shops and favours a simple look to his terrain. Hence he has cornered the market in our area in toy wooden buildings, that give the game a definite "look" and fit in scale with the 15mm figures. I provided the road, water and ridge line.

The game opens with the Turks having a foothold in the central town, hoping to hold off the massed Russian forces that have just appeared over the hills. 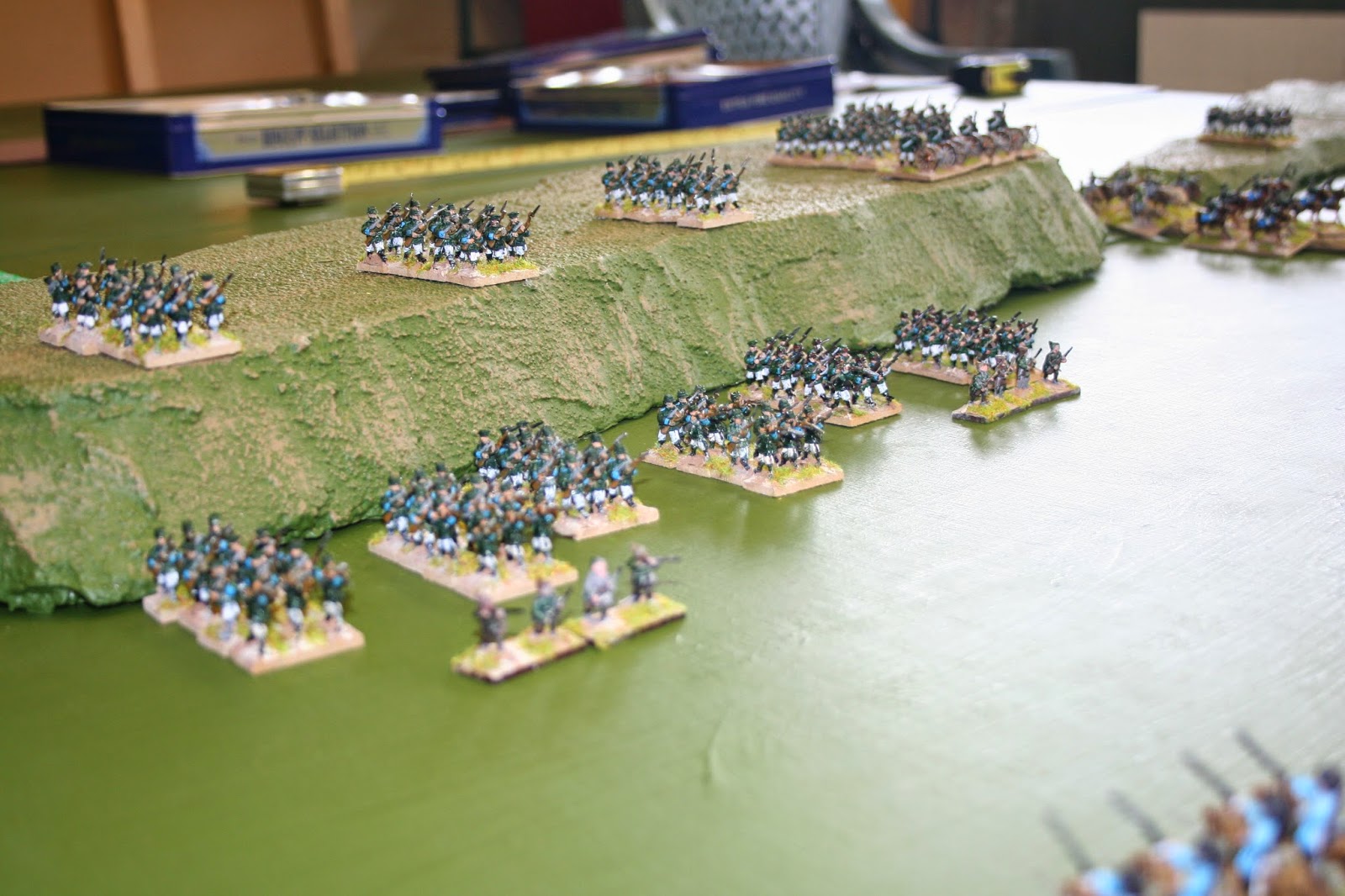 There are rather a lot of Russians, aren't there? 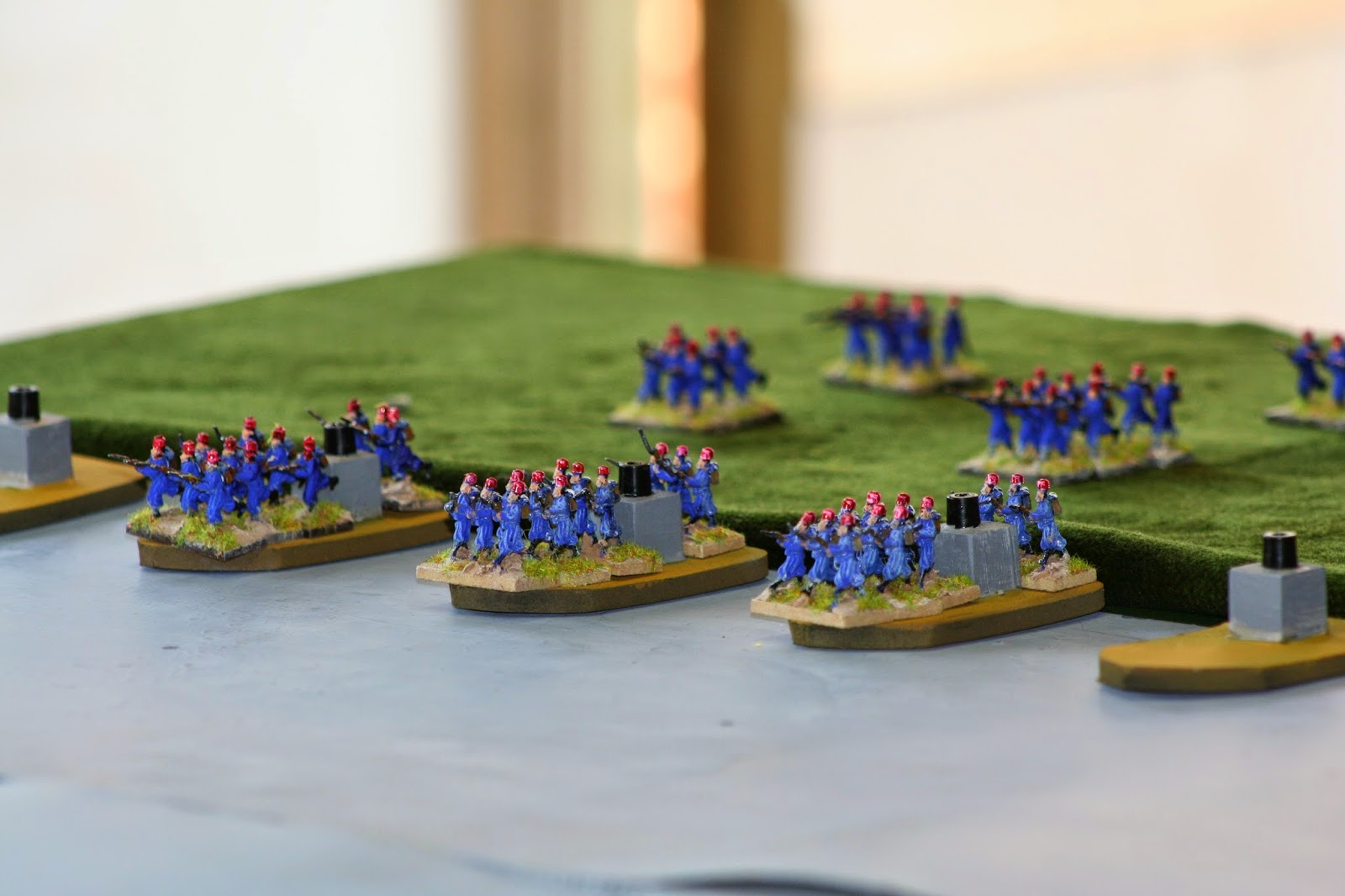 But then there were hordes of Turks, waiting to cross on their landing barges. These natty little boats were scratch built by Chris using modellers block wood, large foam dominoes and hit markers from "Battleships" for funnels. As I said above, he spends too much time in charity shops. 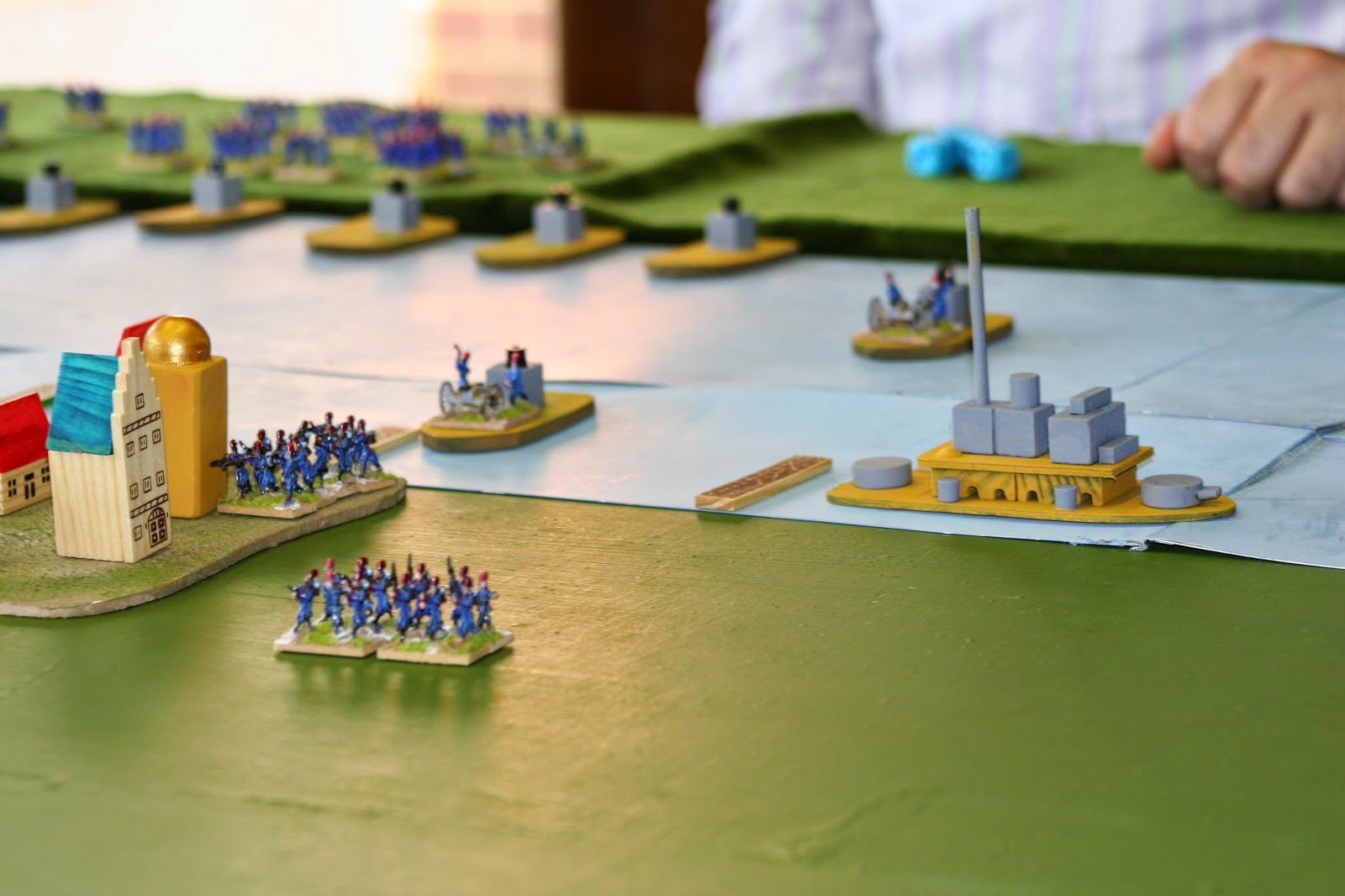 The Turks were also supported by an ironclad. 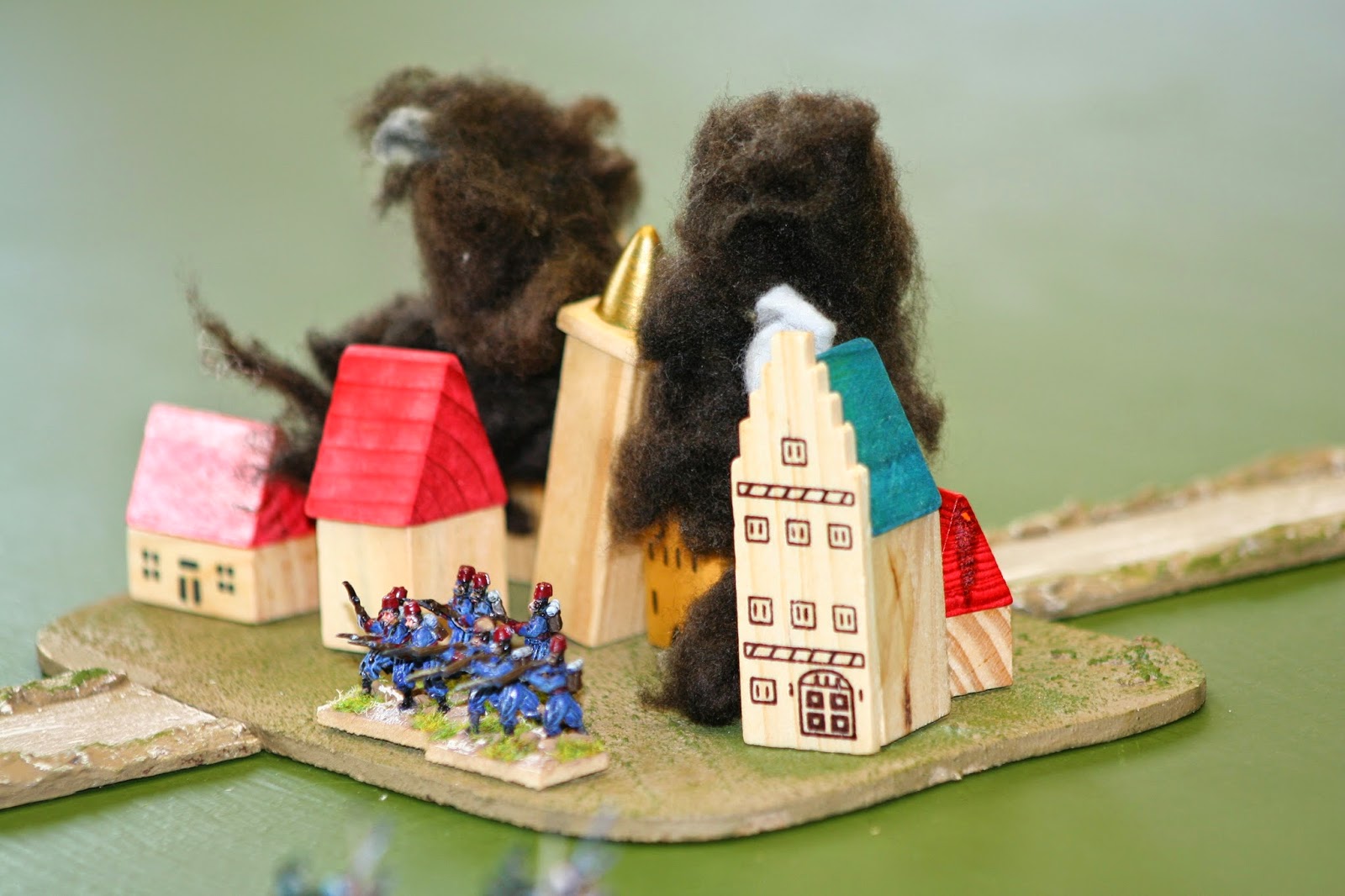 My first objective as the Russians was to clear the town in the centre of the table. I therefore massed my artillery and subjected it too a heavy bombardment. 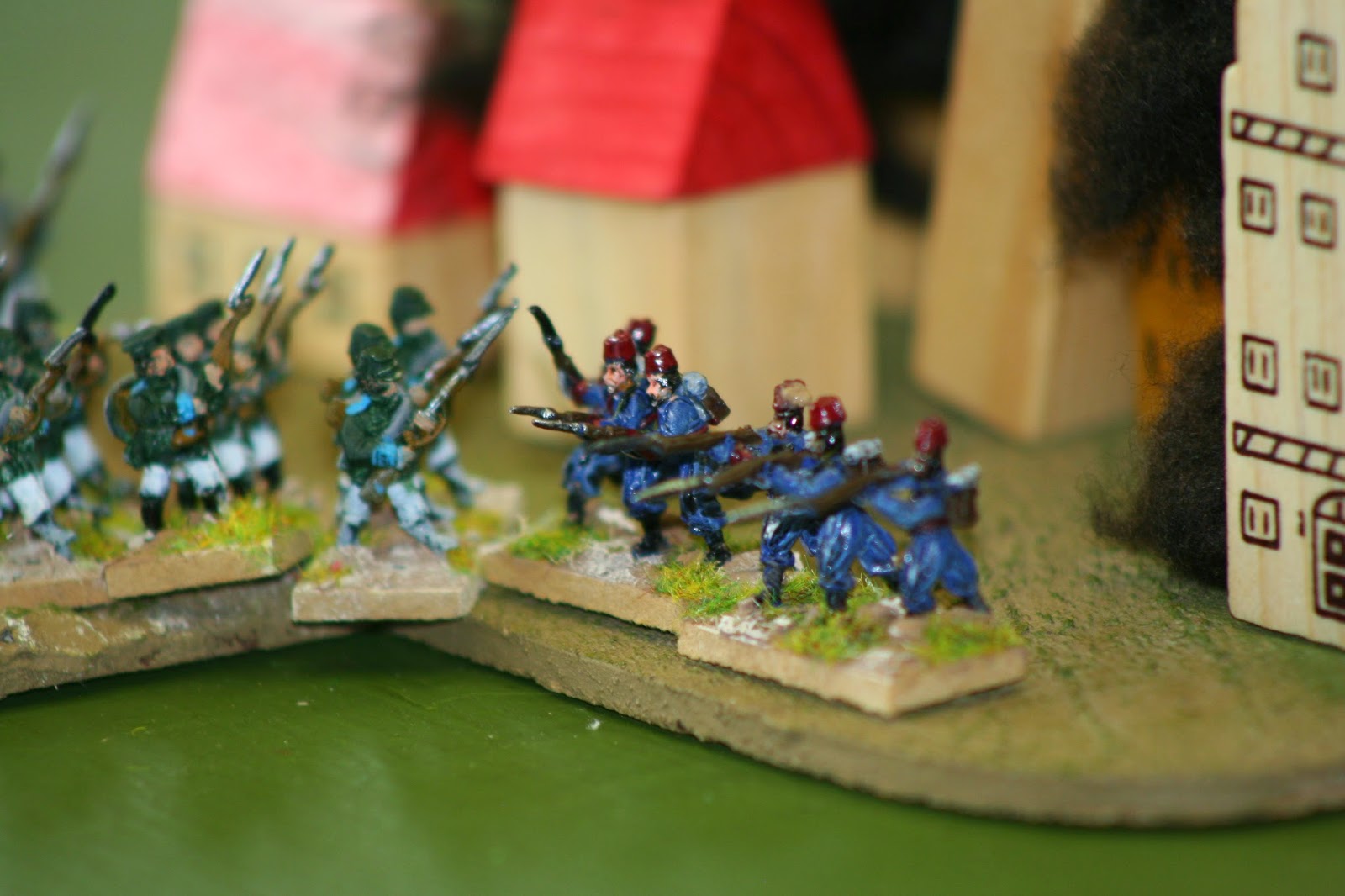 I then assaulted it with a column of infantry. 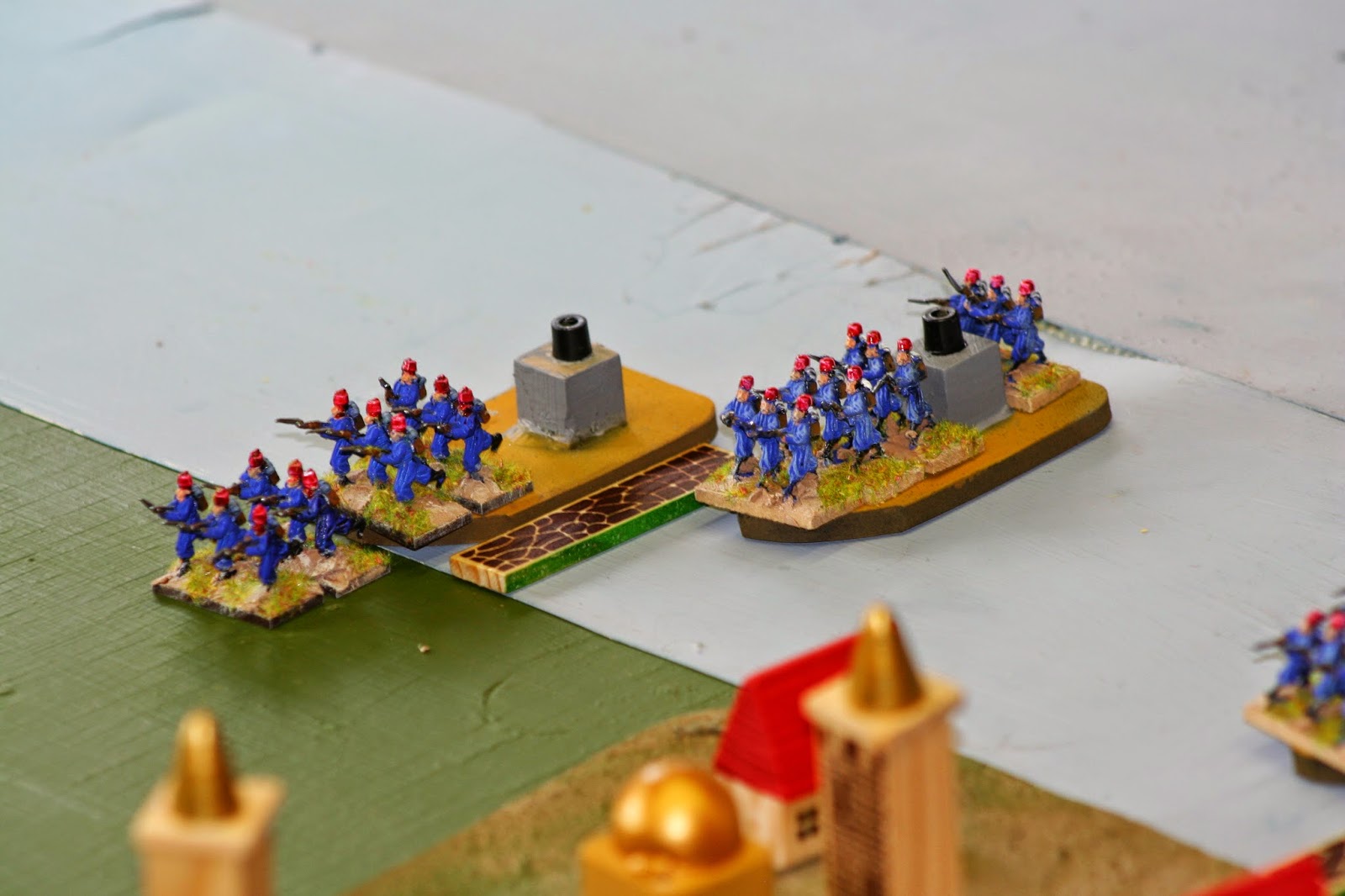 Meanwhile the Turks were starting to land in numbers. 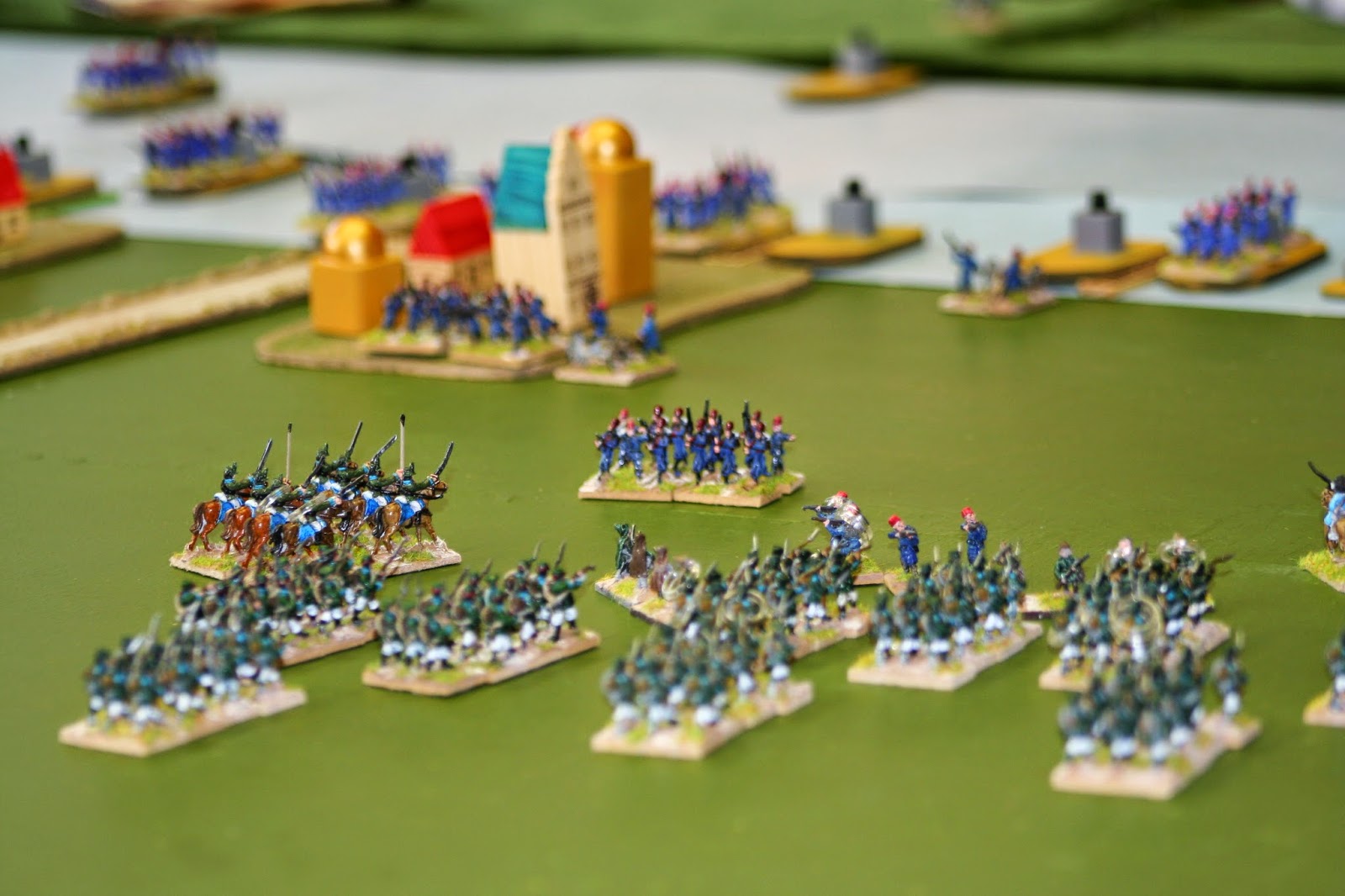 My main force was on my right, and I drove back the Turkish skirmishers and pressed on towards the port, ignoring the desertion of half of my locally recruited skirmishers. There's not a lot of tactical finesse here. The Turks are armed with proper rifles, the Russians with more of a rifled musket whose main purpose is to provide an extension to get the bayonet closer to the enemy. 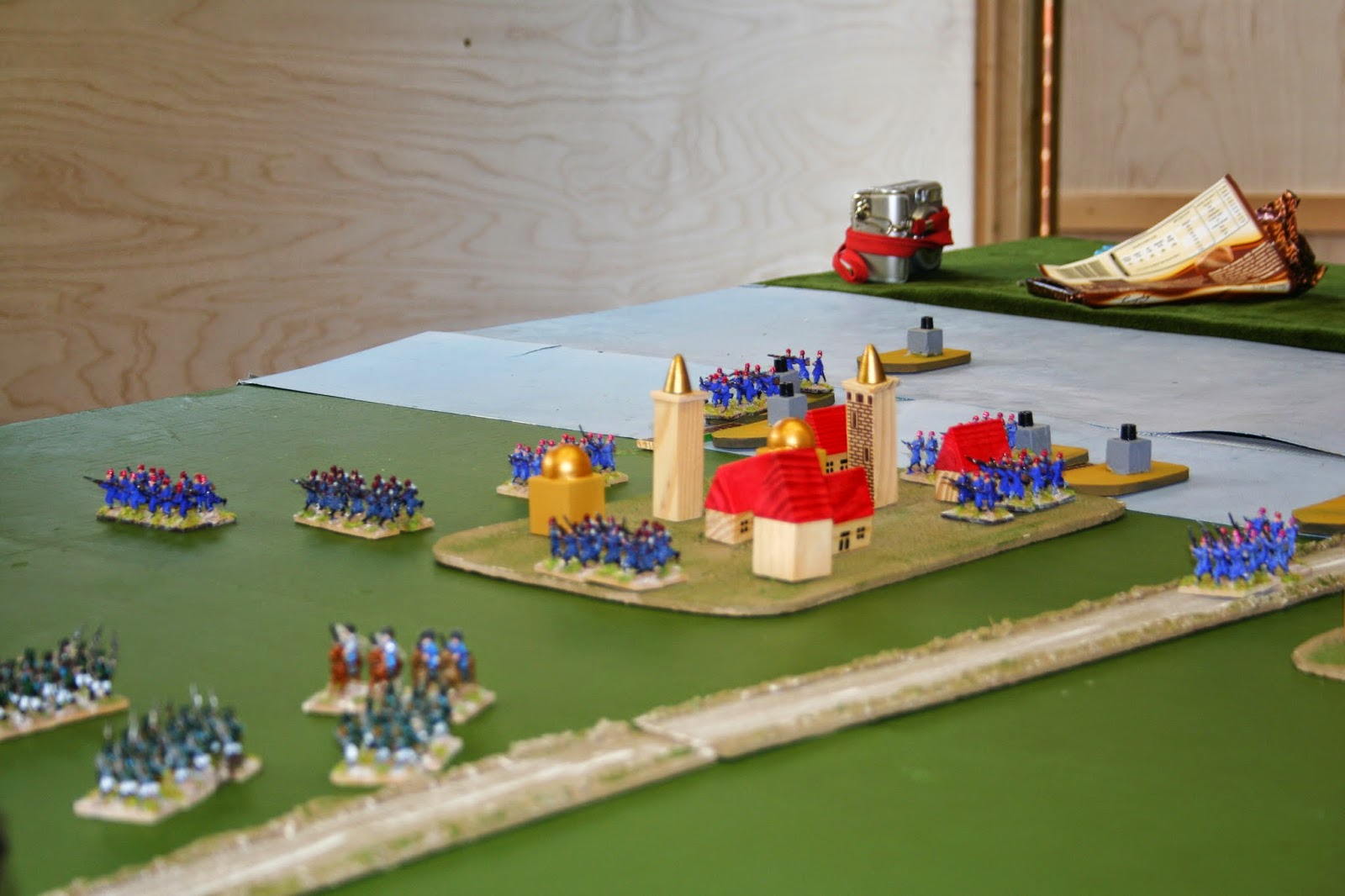 As the Turks were mainly landing on my left, I sent a few columns over there to slow them down, whilst I put my right hook through the other side of the port. 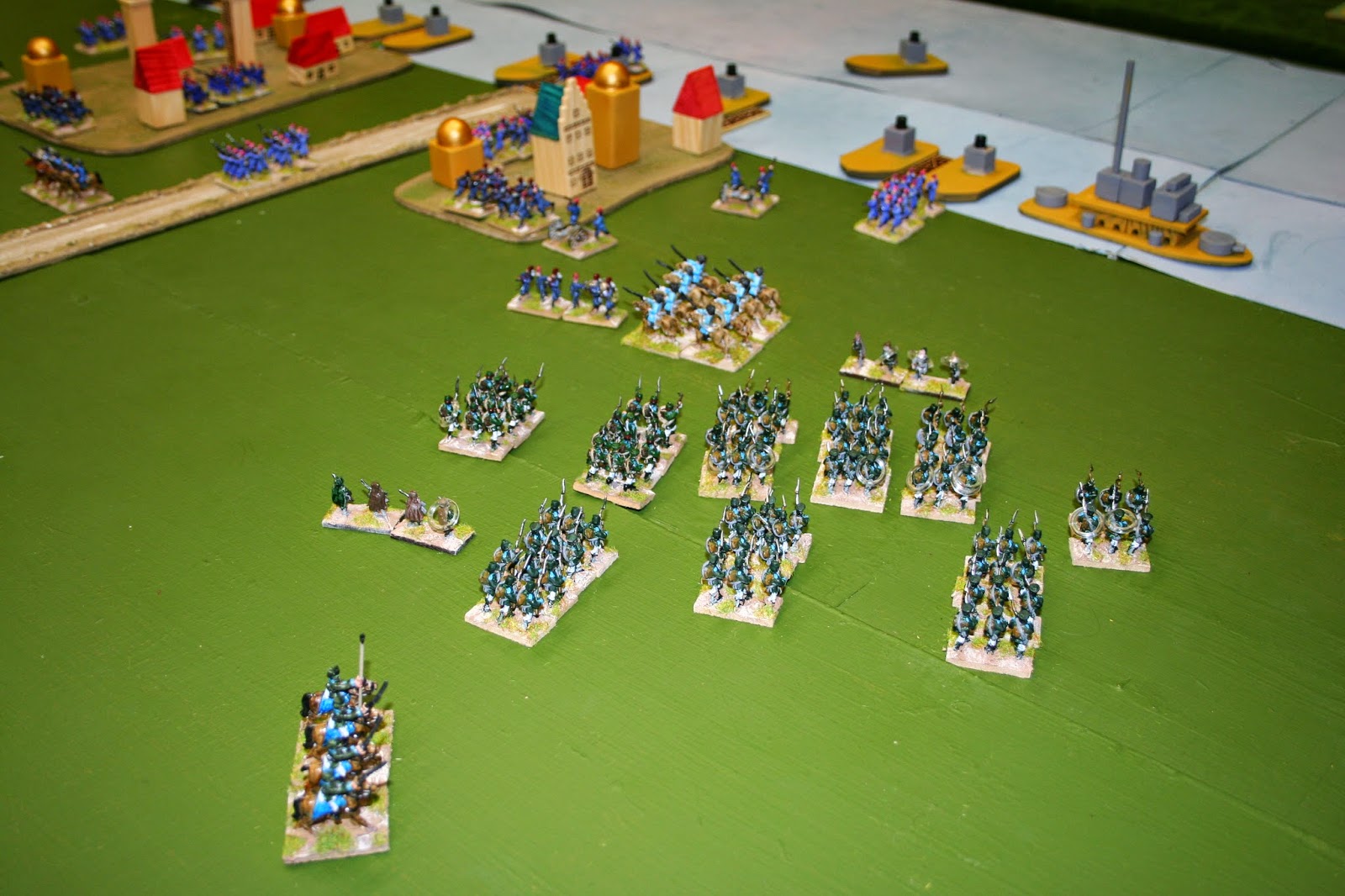 I'm pressing on closely here, but taking fire from the ironclad. Alas for me I have outrun my artillery support which is struggling to catch up and deploy. 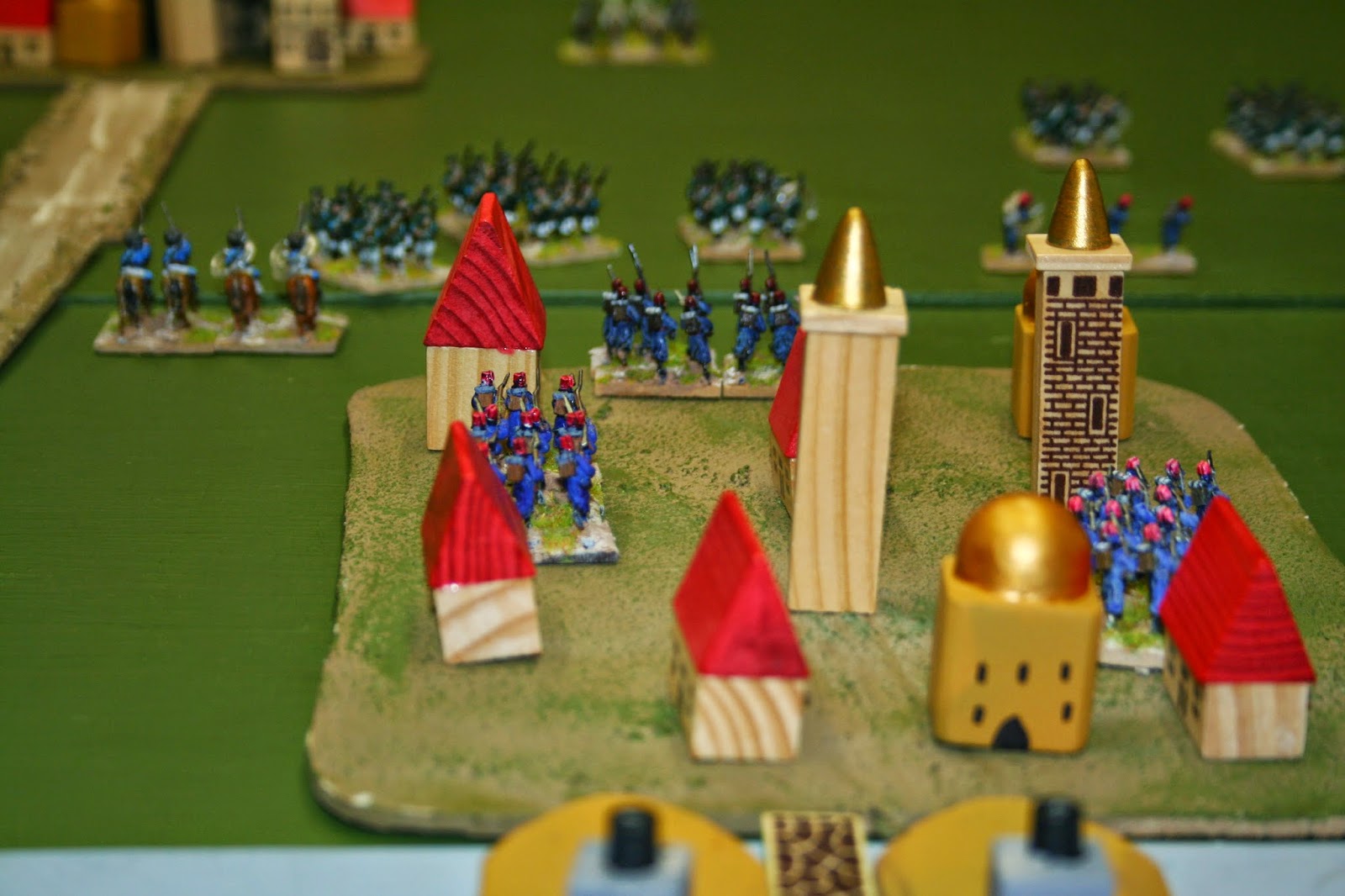 A view from inside the right hand port buildings. My chaps look quite threatening, don't they? 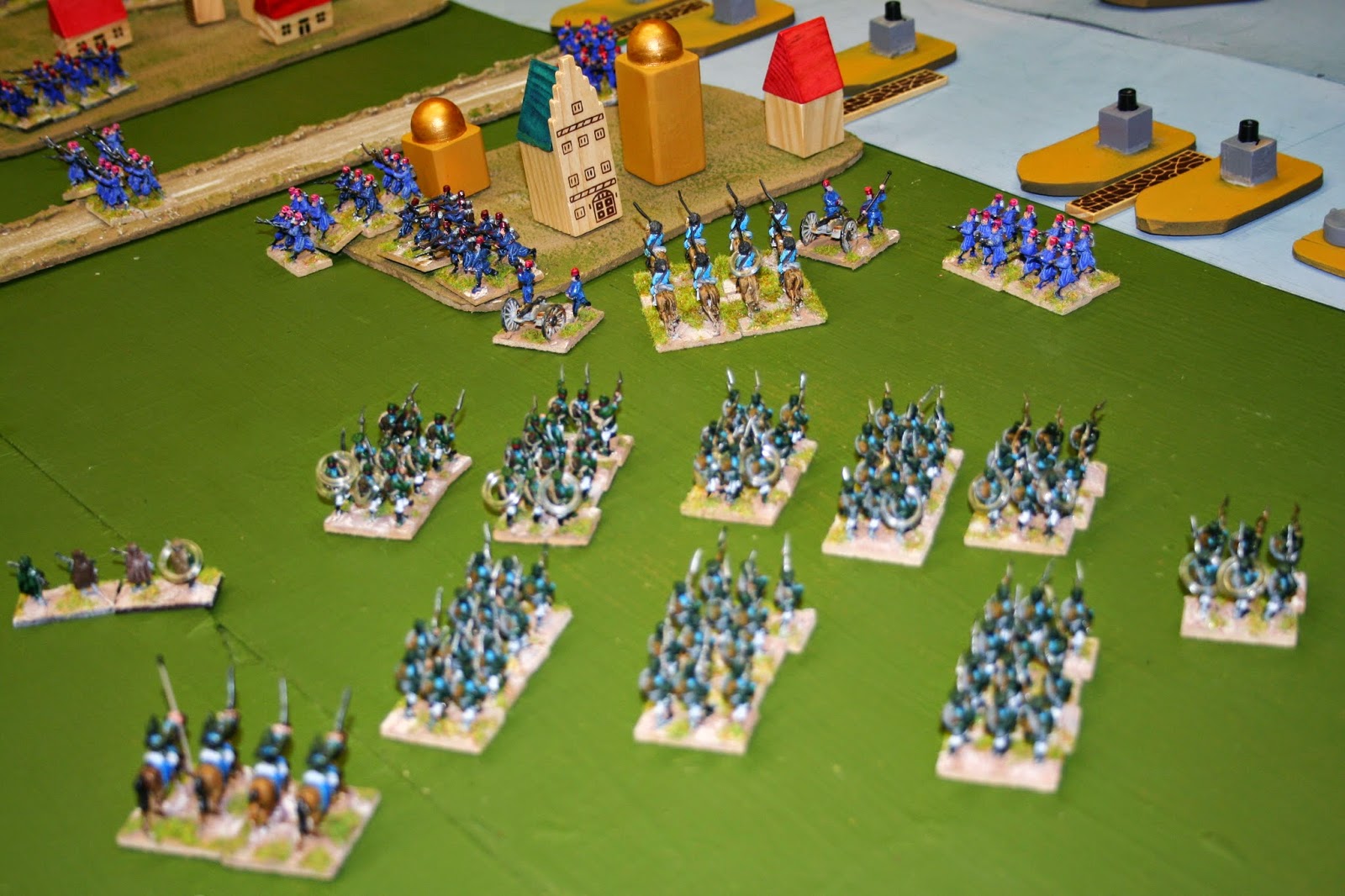 My attack is driving in against the Turkish left. The ironclad and rifles are starting to inflict casualties (NB I'm using clear plastic casualty rings rather than my normal white ones, so you can't see the level of damage quite so easily in the pictures). 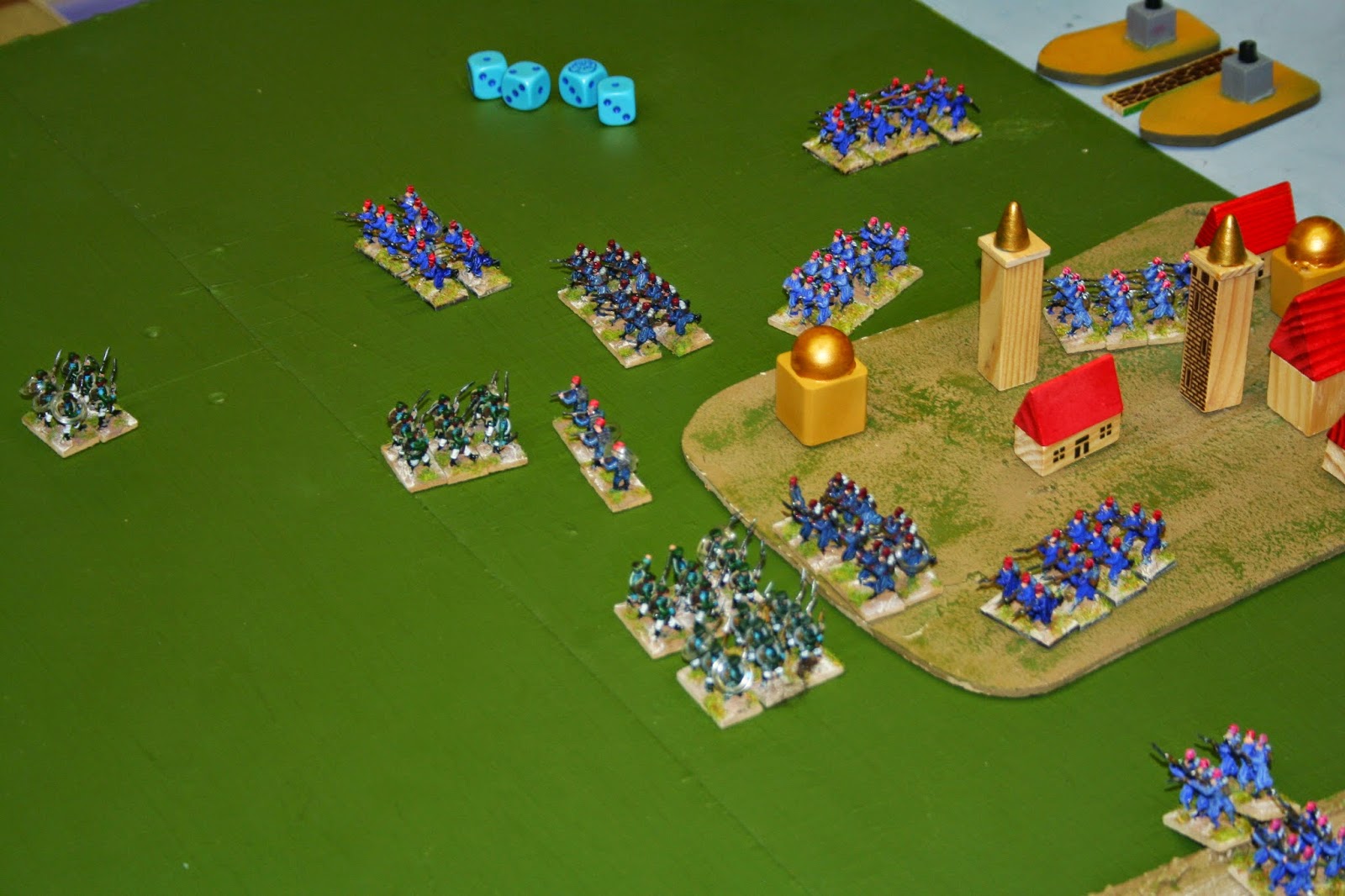 On my left I charge in on the town. (BTW Sometime around now we had taken a break and Phil had left us to go to a committee meeting or something like that, so Chris took over the Turks) 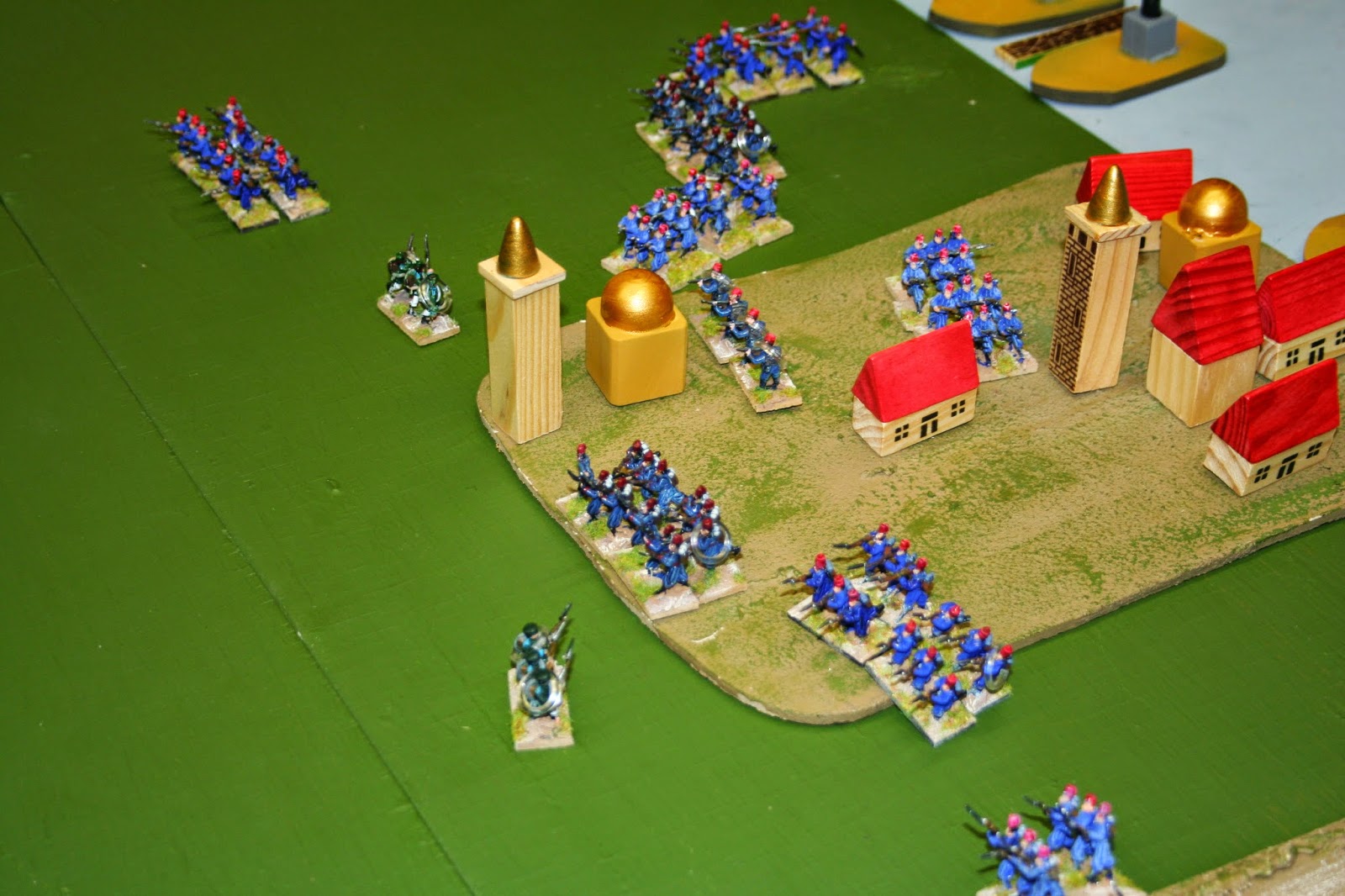 The defensive fire is devastating and some failed morale rolls rather clear me out. Yes, I know the tower from the mosque has moved. War artists, eh? They just make it all up. 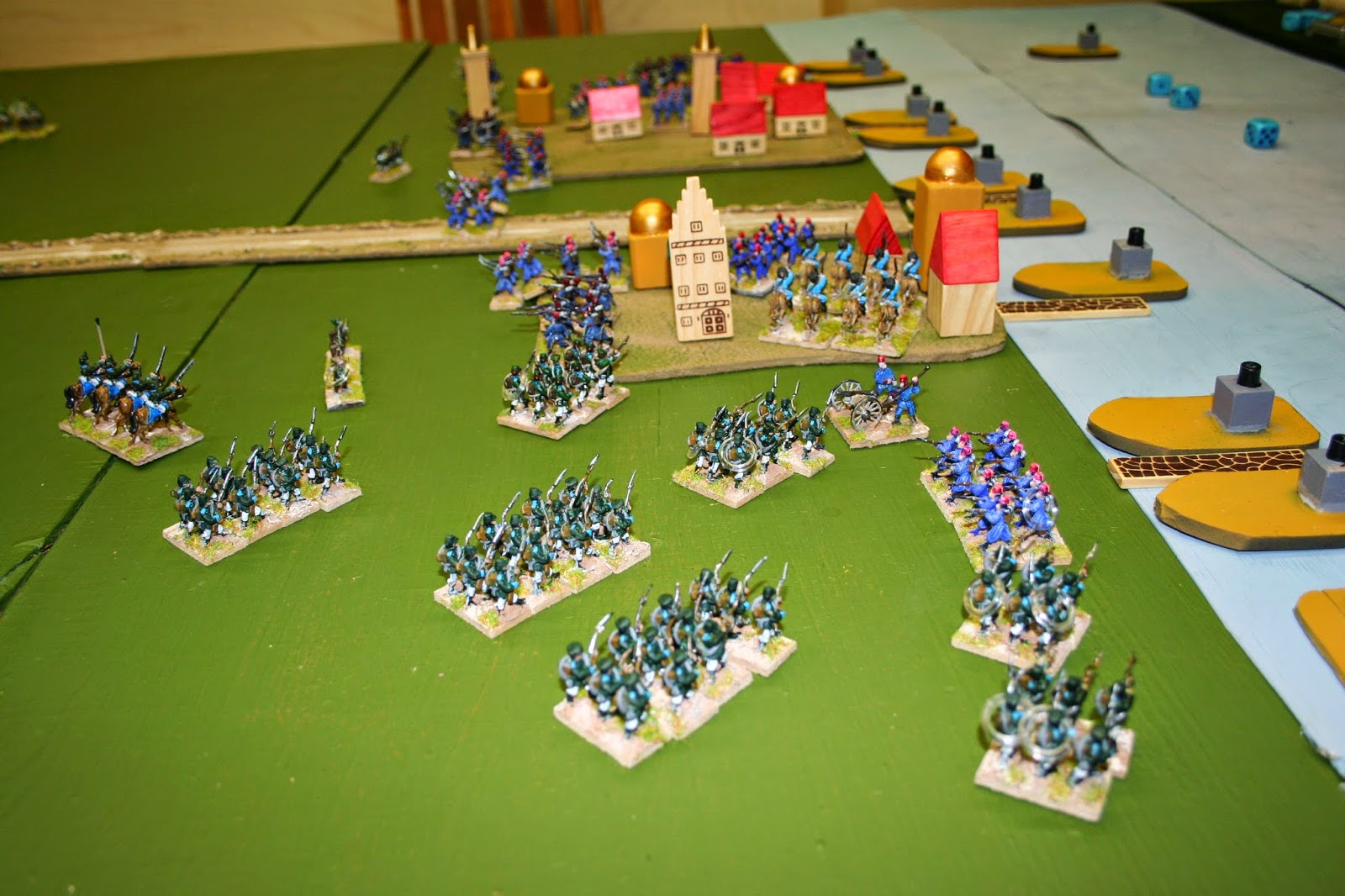 The other side is going a bit better, as I manage to get a flank charge in on the defending infantry line on the water's edge. 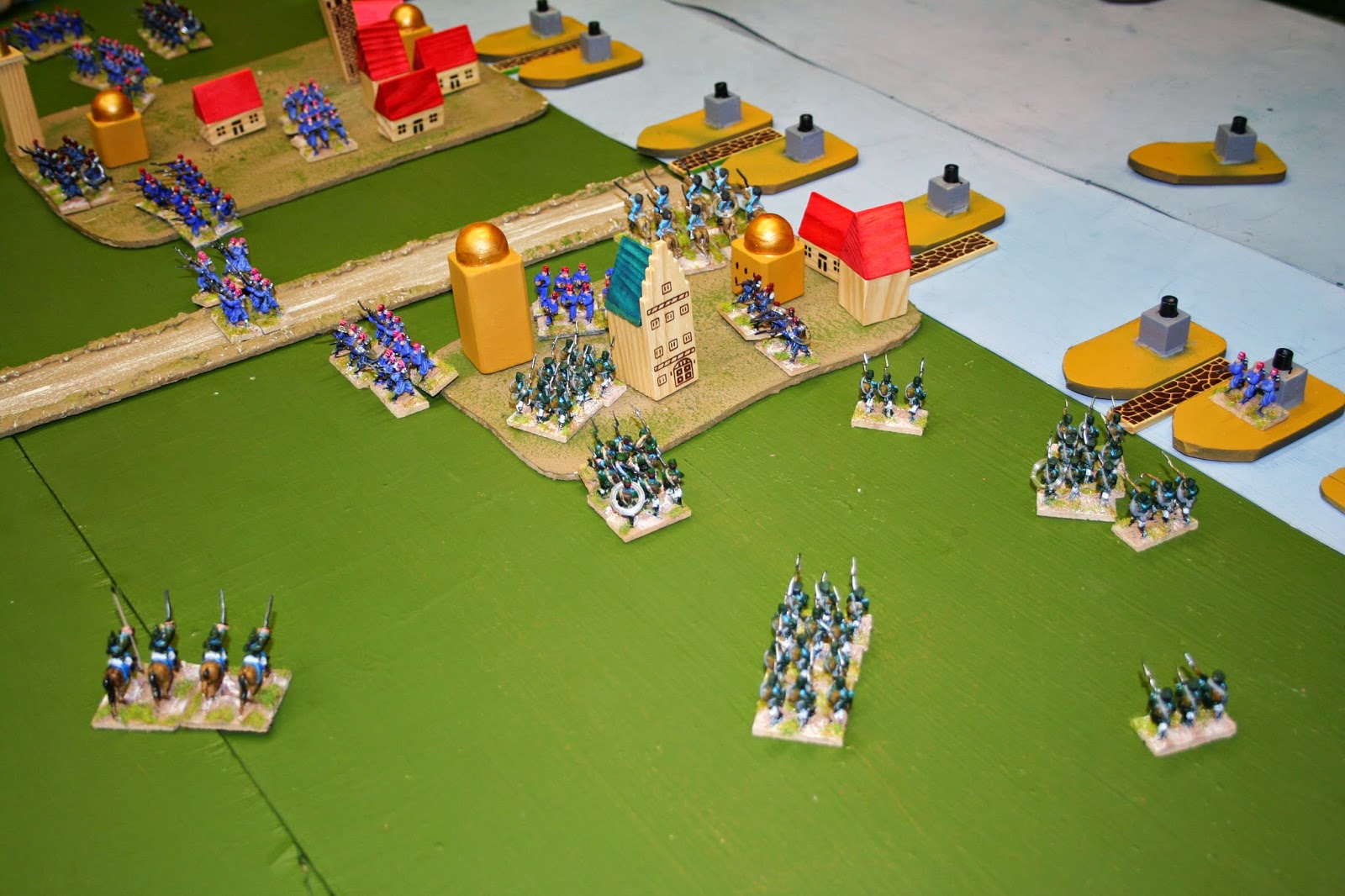 Even though that attack is a success, I'm still taking lots of casualties from rifle fire. Luckily the Ruskis ignore the first morale test and just press on. 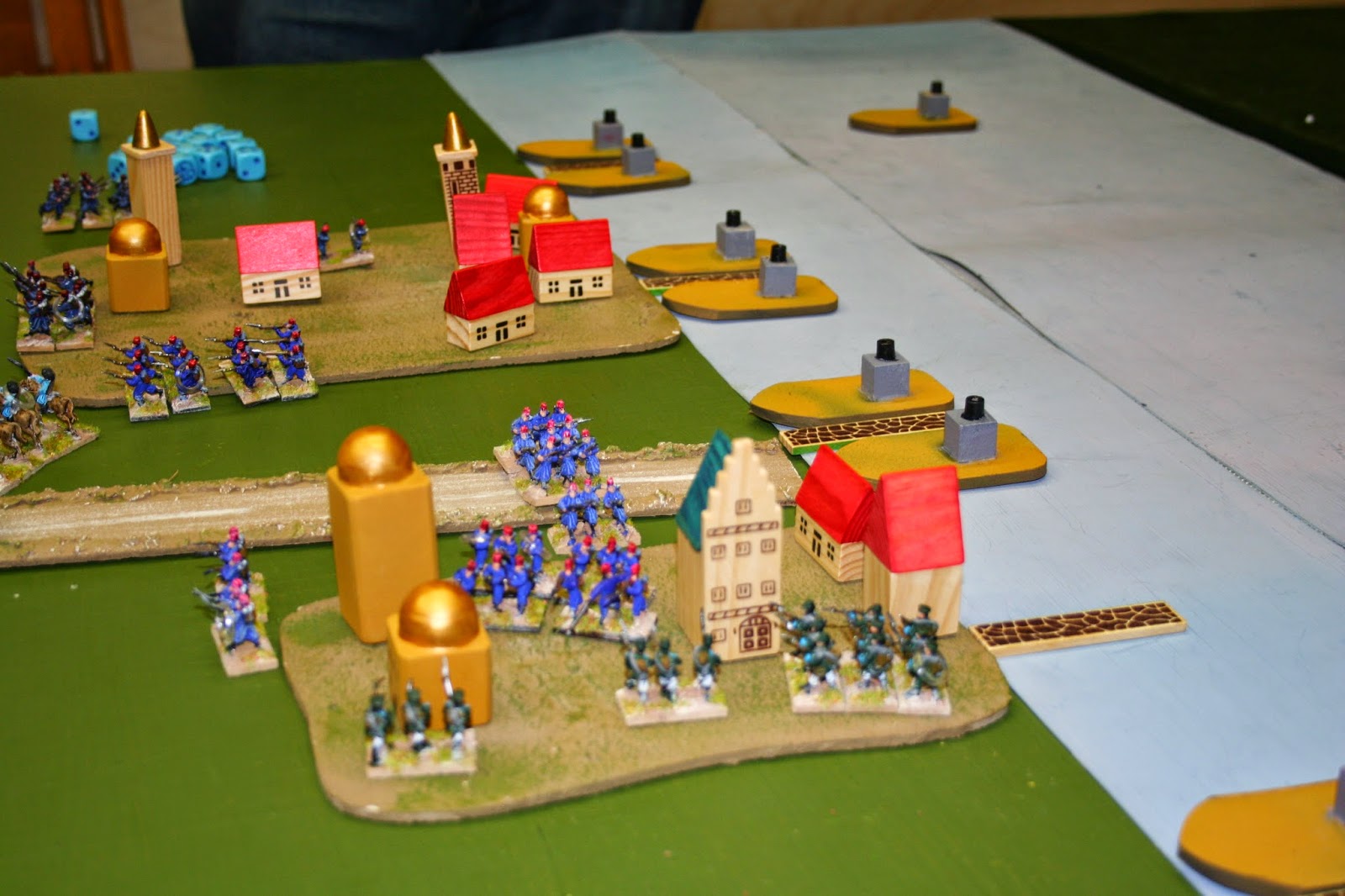 We storm into the port, but even if we succeed here I suspect I may not have enough troops left to exploit the victory. 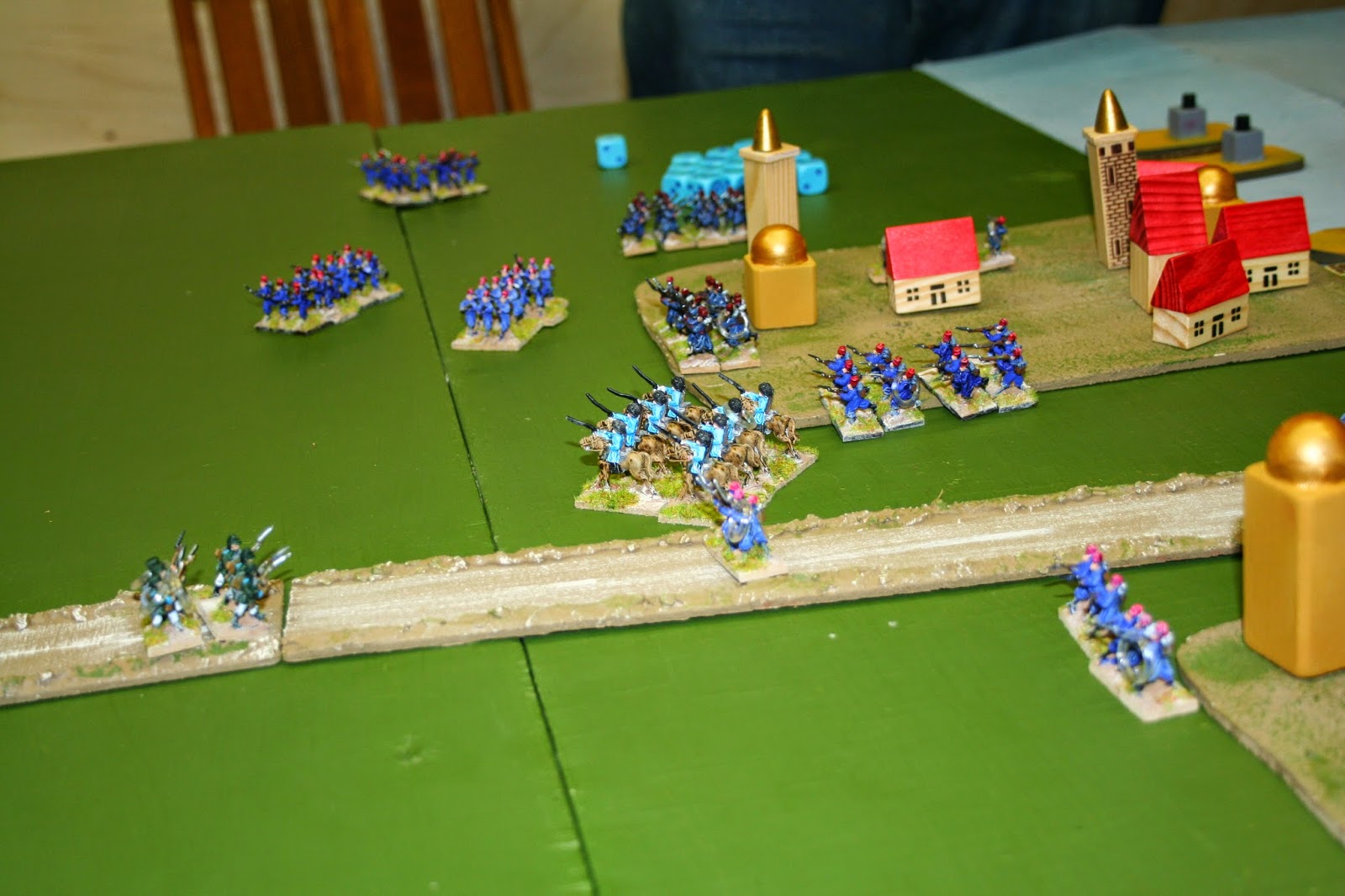 On my left I've got very little remaining, and the Turks start to break out. A counter attack by me down the road has driven the Turks back a bit, but at the cost of a lot of casualties. 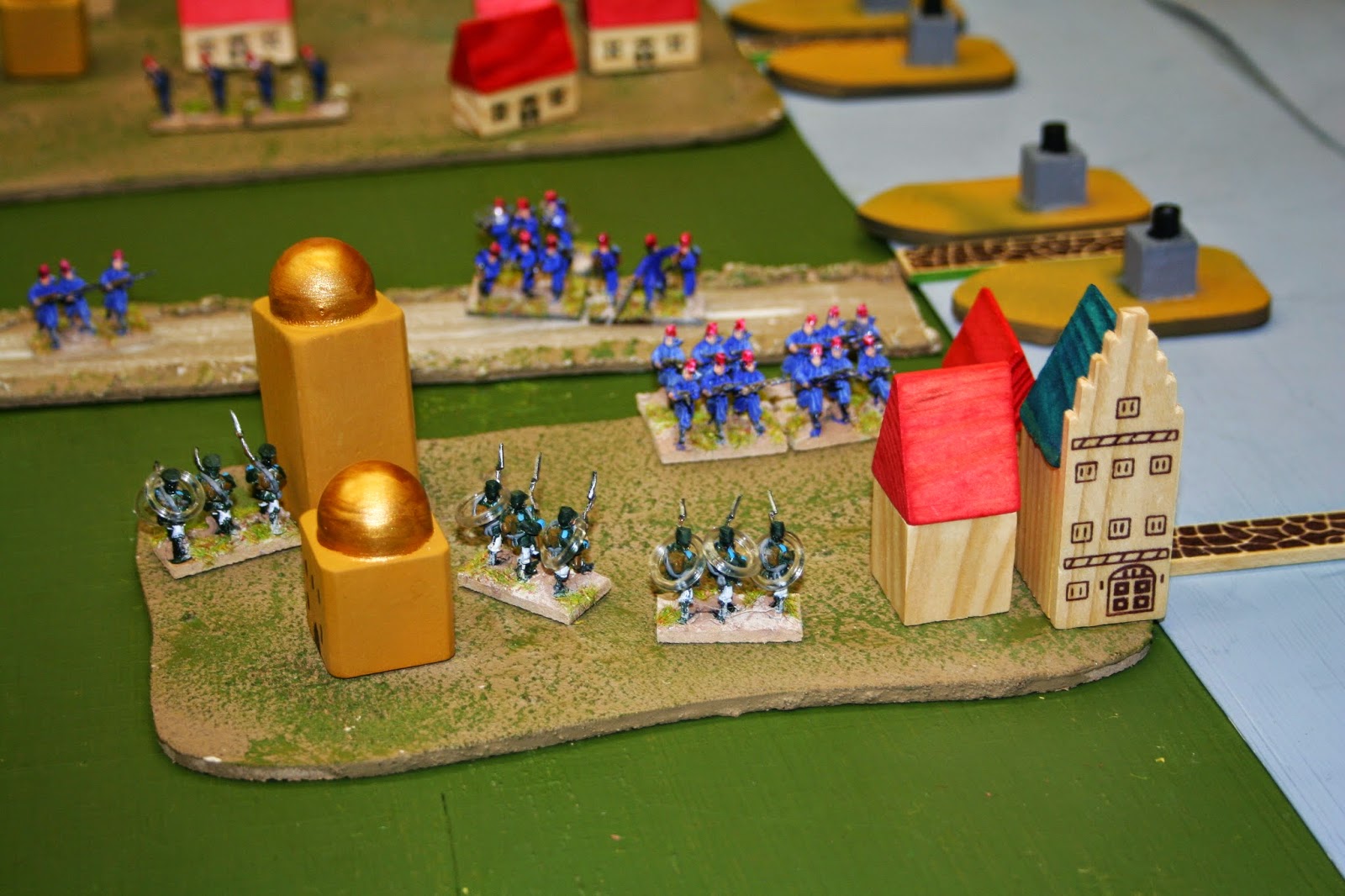 The attacks in the right hand port buildings go quite well, and the Turks are left holding on by their finger tips. 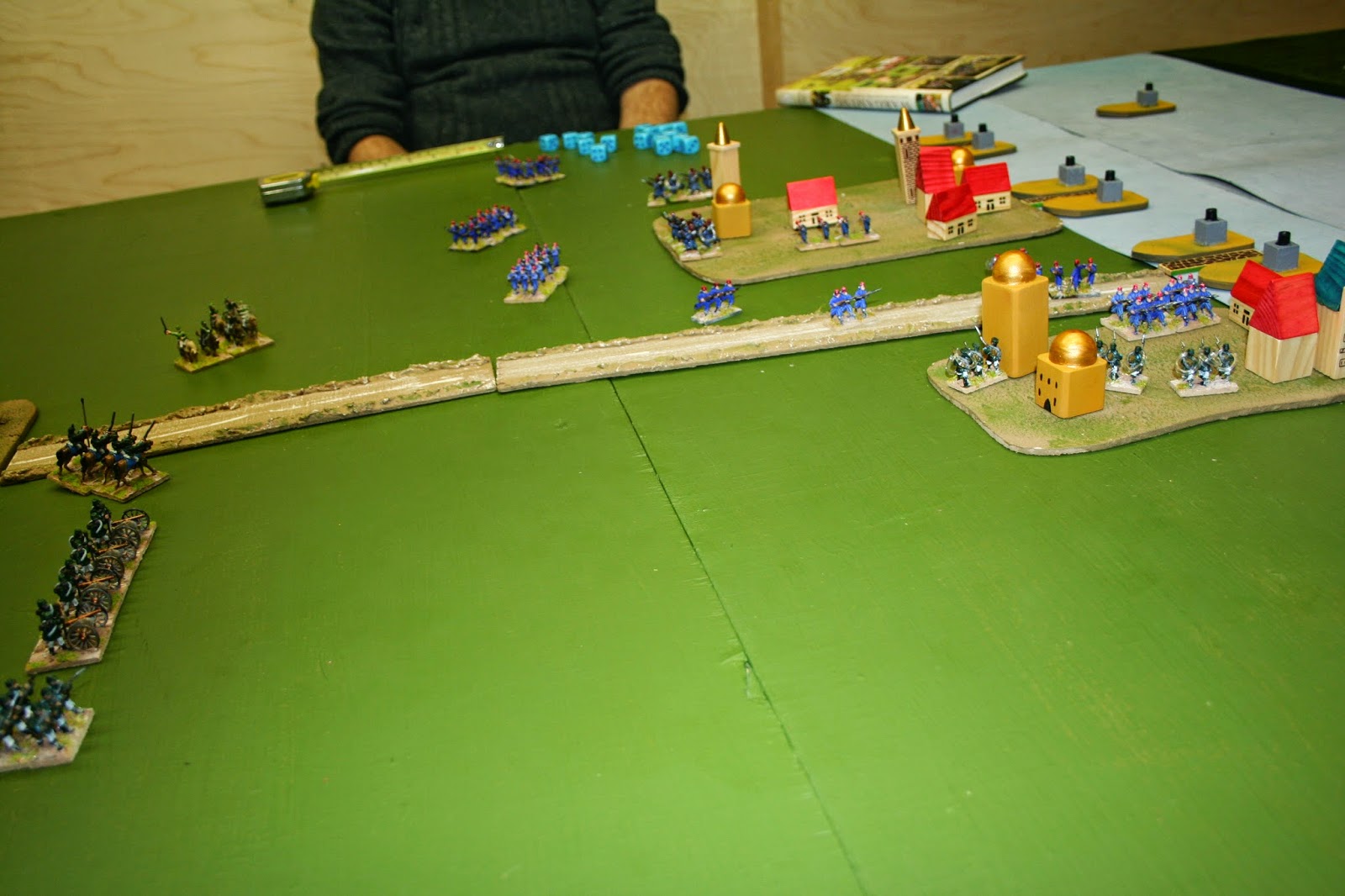 The game ends with me in possession, just, of one half of the port, and Chris well in control on the other side. My main strength is the gun line off to the left in the picture. This has proved to be very effective whenever it has had a target, and the Turks are reluctant to close with it.

So, in summary, the Turks have been made to think twice about the invasion but at the cost of pretty much the entire Russian army in this area. Good job the Russians aren't short of men and the tactics they favour don't require a lot of training.

Another exciting game. NT's rules were expanded from the 8-12 units he suggests, but they cope okay with a lot more. They seem to work well and provide a good range of possibilities and problems to the players. They are decidedly not Napoleonics+ nor are they ACW with add-ons.

I may pick up a copy for use with my next project.
Posted by Trebian at 10:17